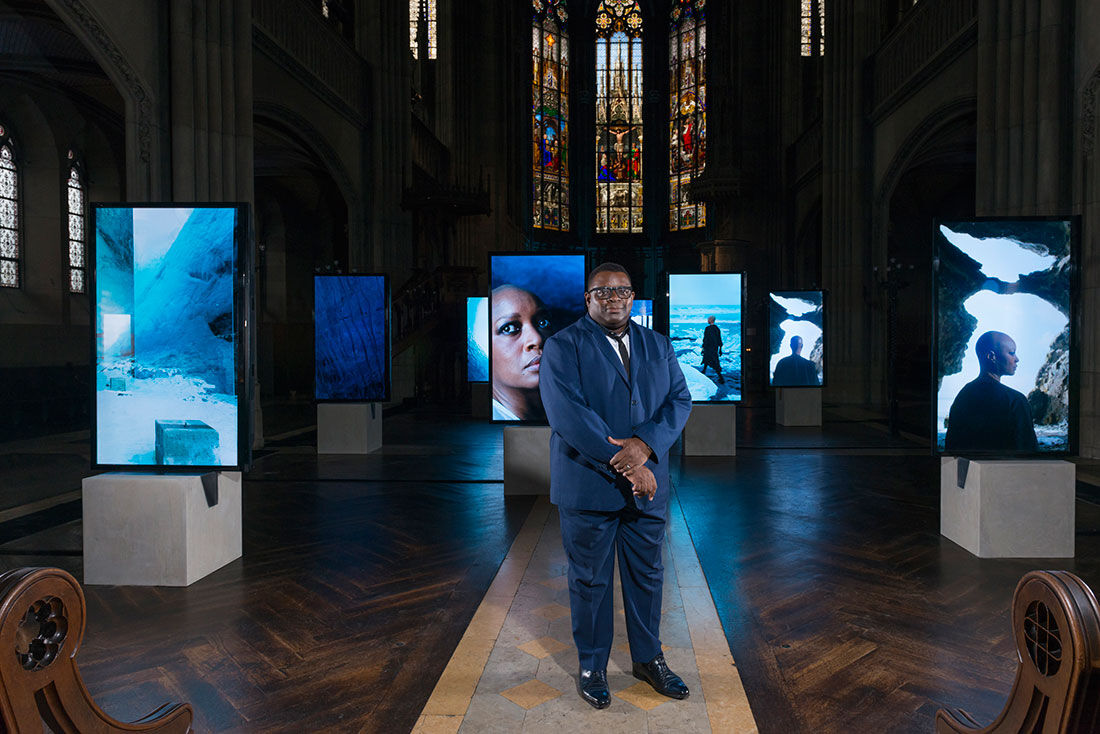 It’s no secret that corporations and luxury brands are playing an increasingly large part in funding artworks, artists, and institutions in all corners of the art world. With state funding for the arts steadily dwindling in Europe and nearly non-existent in the States, someone has to make up the gap, and private patrons can only do so much. (Though, they could probably do more.) But what’s the right tack for brands to take when looking to up their arts engagement and, let’s face it, the visibility among the world’s economic elite that goes with it?

Most still engage through pure sponsorship, prize-giving, and product-level commissions, inviting artists to design some aspect of a product or brand experience closely aligned to their consumer offer. A whole new sub-industry is now popping up around such commissions, led in part by UTA’s Joshua Roth. But a small cohort of brands have stepped out with more unusual methods of pushing culture forward, three examples of which are on view during Art Basel Week.
Isaac Julien
premiered his latest work on Tuesday morning of the fair. The latest of Rolls-Royce’s art commissions, the multi-channel film, Stones Against Diamonds, is the first in a series of three dedicated to architect
Lina Bo Bardi
and is currently installed in Basel’s Elisabethenkirche. (It was also previewed during the Venice Biennale last month.) “I’ve been researching this project for the last three years,” Julien told Artsy after unveiling the piece. “I first came across Lina Bo Bardi in 1996, but I later had an exhibition in São Paulo at Sesc Pompeia, which she designed, and during the exhibition I fell in love.” 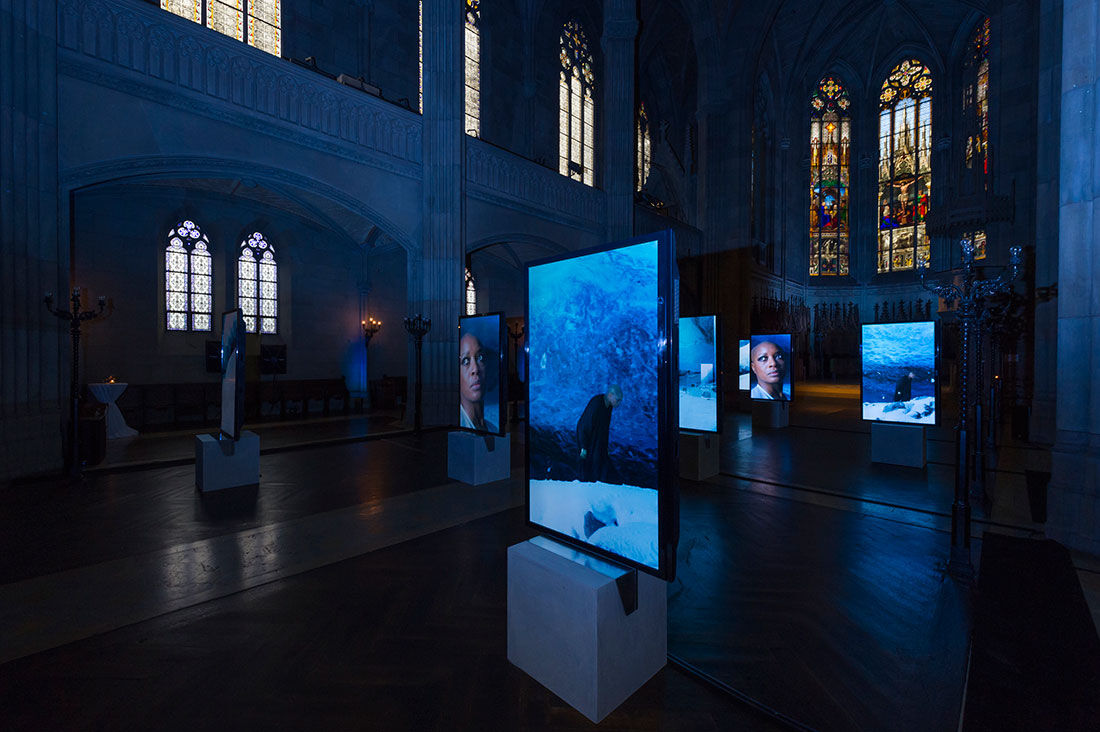 This first film was shot in an ice cave in Iceland—a setting Julien has been itching to use for the last decade—in which architectural and design elements by Bo Bardi were installed. Julien explains that he had been searching for funding in order to realize the costly project, noting that all of his projects “are only made possible by patronage by foundations or museums or collectors.” “In this case,” he adds, “it was quite a rare opportunity that a brand would support moving image works.”

For Rolls-Royce’s art programs manager Alexander Steinbrueck, “That’s exactly the point.” He says their interest in video, moving image, and light art for this year’s set of commissions—which also include pieces by
Martin Wong
,
Ana Maria Tavares
, Manal Al Dowayan, and
Carlos Rolon
—stems from a wish to associate the traditional brand with a younger and more dynamic image. Nonetheless, Julien was given free reign to produce the piece he had originally envisioned. “For us, it’s really about supporting the artist,” says Steinbrueck. 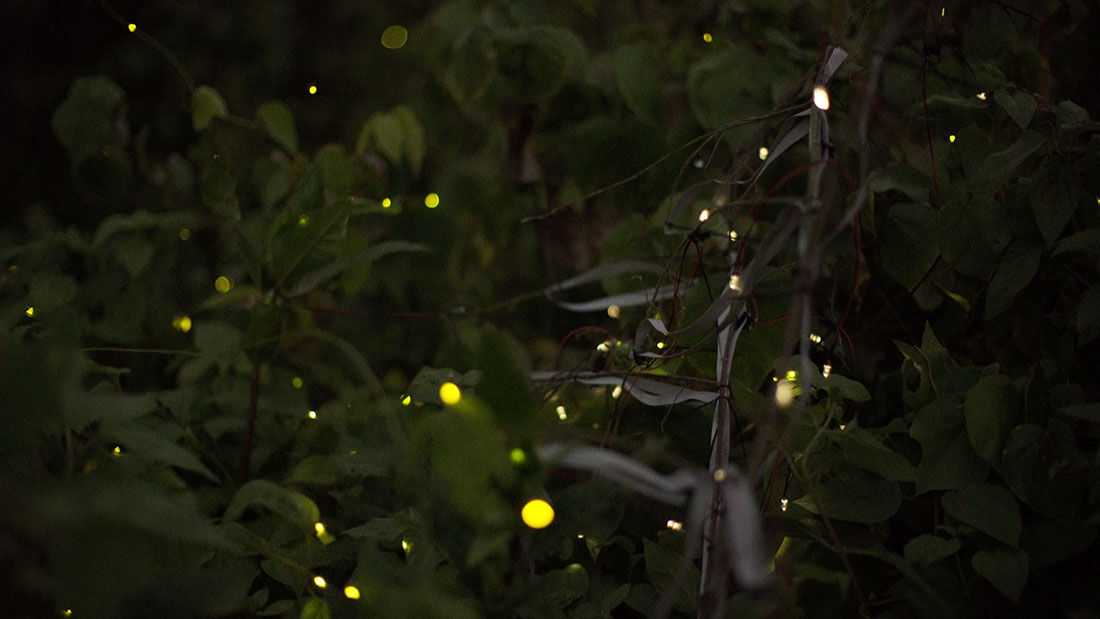 Advertisement
Closer to the fair, Audemars Piguet has taken over a vast space within the Volkshaus for “Synchronicity,” an immersive installation by Paris-based, Swiss artist
Robin Meier
. Entering through an improvised air lock, viewers are taken into what Meier described as, “a laboratory of sorts where I try to influence the rhythm at which the grasshoppers chirp and the fireflies illuminate.” Two pendulums swing, held in sync by magnets and hooked up to a series of controllers, which cause strings of LEDs to pulse (and thus the fireflies to illuminate in time) and a low drone to swell (and the grasshoppers to chirp). The installation was curated by Chalet Society director Marc-Olivier Wahler who chose a shortlist of artists, including Meier, who then submitted his part-art, part-science proposal.
“I never thought they would choose this project,” Meier confides as we tour the installation, which would not be out of place in an ambitious biennial. “I just proposed it because it was something that I really wanted to do. But it’s so risky.” He explains that, though he had researched the theory behind altering the synchronous activities of insects, he hadn’t actually tested it in practice until taking a research trip to Thailand as part of the commission.

Like video, research-based practices such as Meier’s aren’t exactly what you think of when it comes to corporate commission fodder, but even so, “during the process of making the work, we had total carte blanche,” he says. “One of the best parts was the fact that I could create so many links and connections with scientists and people around the world that are working on similar research.” He’s now passed on video footage to those scientists who had previously been unable to capture some of the phenomenon that Meier did during his research. 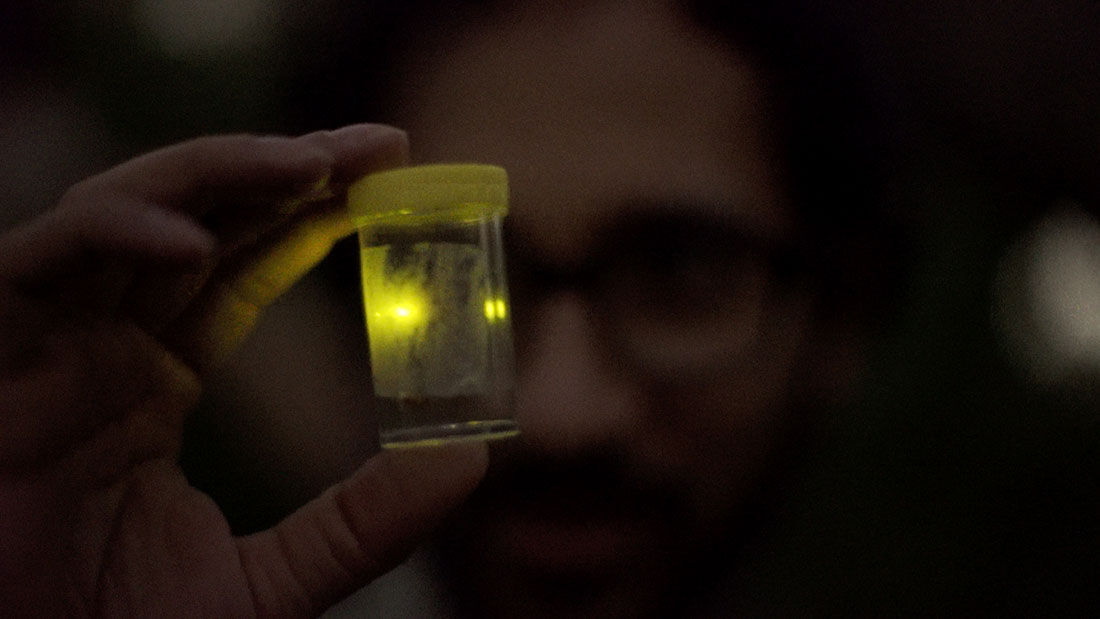 Museums, too, are seeing an uptick in the depth of their collaborations with sponsors. Again, not all of this engagement is created equal, with some institutions coming under fire for bringing on questionable partners. But, others, such as the Louisiana Museum’s cooperation with UBS, have sprouted genuinely important exhibitions that may have otherwise not come to fruition. Currently on view in partial form in the bank’s lounge at Art Basel, “Lucian Freud: A Closer Look” is the latest exhibition in the museum’s “Louisiana on Paper” series and will open on September 3rd.

UBS Art Collection curator Stephen McCoubrey explained that when they started speaking with the museum about sponsoring their educational programming, curator Anders Kold mentioned that they were considering
Lucien Freud
for the next edition of the on-paper series. “We have the vast majority of his print works in our collection, so they suggested that we could make a show together,” says McCoubrey.

In all, 54 works from the collection will comprise the majority of the upcoming show with several other key pieces sourced from elsewhere. Thirty of those works are currently on view in Basel. “It was an opportunity to really look into the depth of the collection,” the curator adds, juxtaposing this show with their other current effort, “Don’t Shoot the Painter,” an exhibition of 90 artists from the collection curated by Francesco Bonami at the Galleria d’Arte Moderna in Milan.