The inaugural edition of the Object & Thing fair opened today in a resolutely industrial corner of Bushwick, Brooklyn, where 32 galleries are presenting objects ranging from the elegant to the absurd. It provides an intriguing (and occasionally frustrating) model for a small-scale fair, abandoning gallery-specific booths in favor of a highly curated presentation where works mingle in eclectic tableaux. If you ever wondered whether
Paul McCarthy
’s Christmas-tree-shaped “butt plug” inflatables could comfortably share real estate with resin vases by
Gaetano Pesce
, you now have your answer. 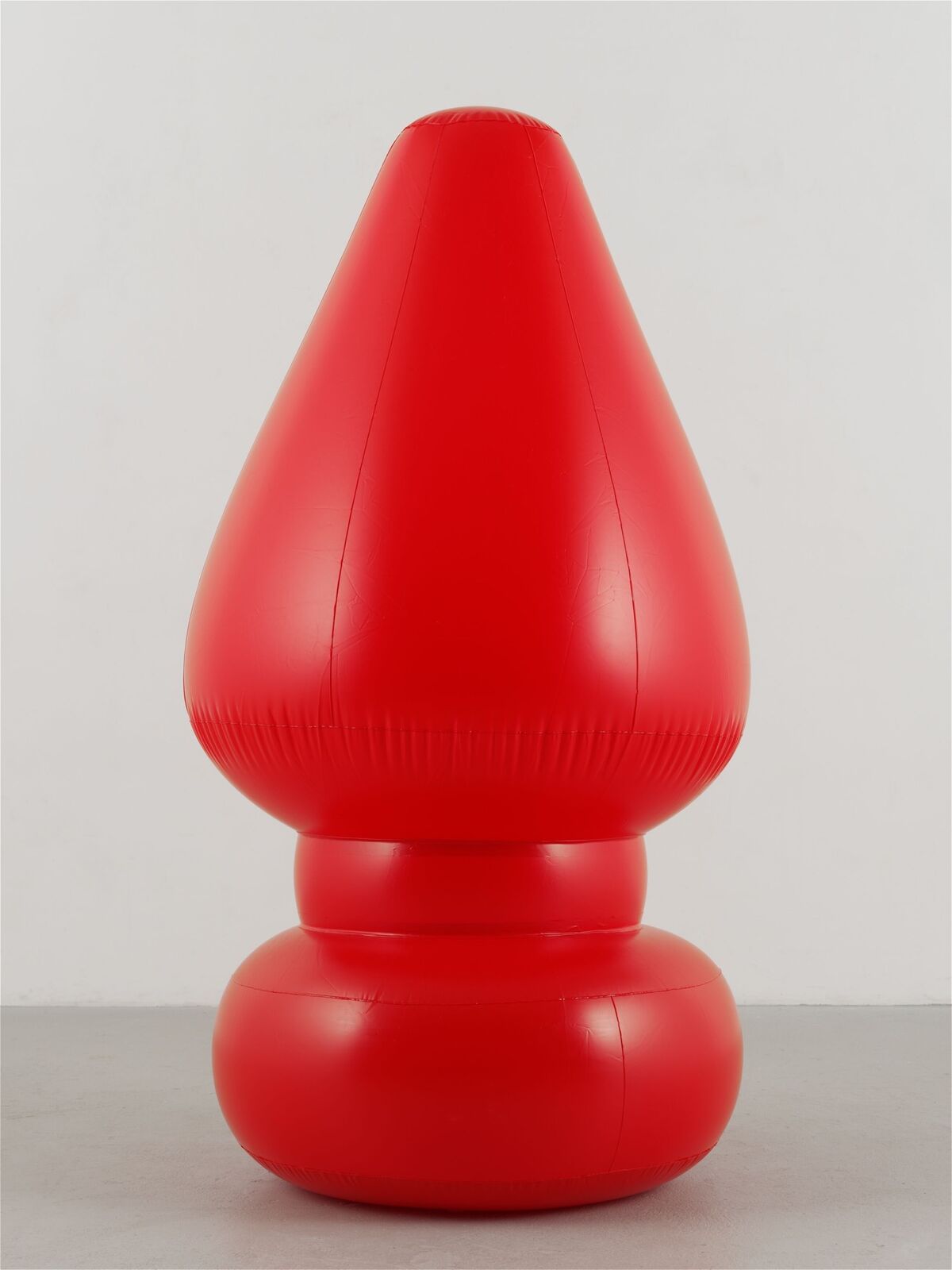 This boundary smudging makes the experience invigorating for the casual viewer, but also raises questions about what is likely to actually sell. Who is dropping $30,000 on a pair of used Adidas sneakers, dangling from a string, by bad-boy artist
Christoph Büchel
? Design audiences might wonder what
Martin Creed
is doing here, or the sculptor
Aaron Curry
, represented by a small, maquette-style sculpture priced at $35,000. For fairgoers of more modest means, interesting objects abound in The Shop, a consumer-friendly section featuring goods spanning $100
Peter Shire
mugs offered by Karma Bookstore to colorful water pitchers in elastic forms from Momosan Shop. Overall, Object & Thing founder Abby Bangser (a former artistic director at Frieze) deserves kudos for her sheer gutsiness. While some may still bicker over the line between art and design, this fair refreshingly does away with such boring old divisions.
Here’s the part that is both exciting and annoying: All of the fair’s objects are clustered into discrete “islands,” allowing for quirky juxtapositions, like colorful Kachina dolls perched atop a bright yellow
Donald Judd
stool. There are no labels—anywhere—which means that navigating Object & Thing requires triangulating between the dense visitor’s map and the corresponding object-by-object information on the fair’s website. That’s good news for those who can’t actually make it to the fair—it’s possible to play along at home, via an excellent virtual tour function—but it can make the IRL experience slightly disorienting. 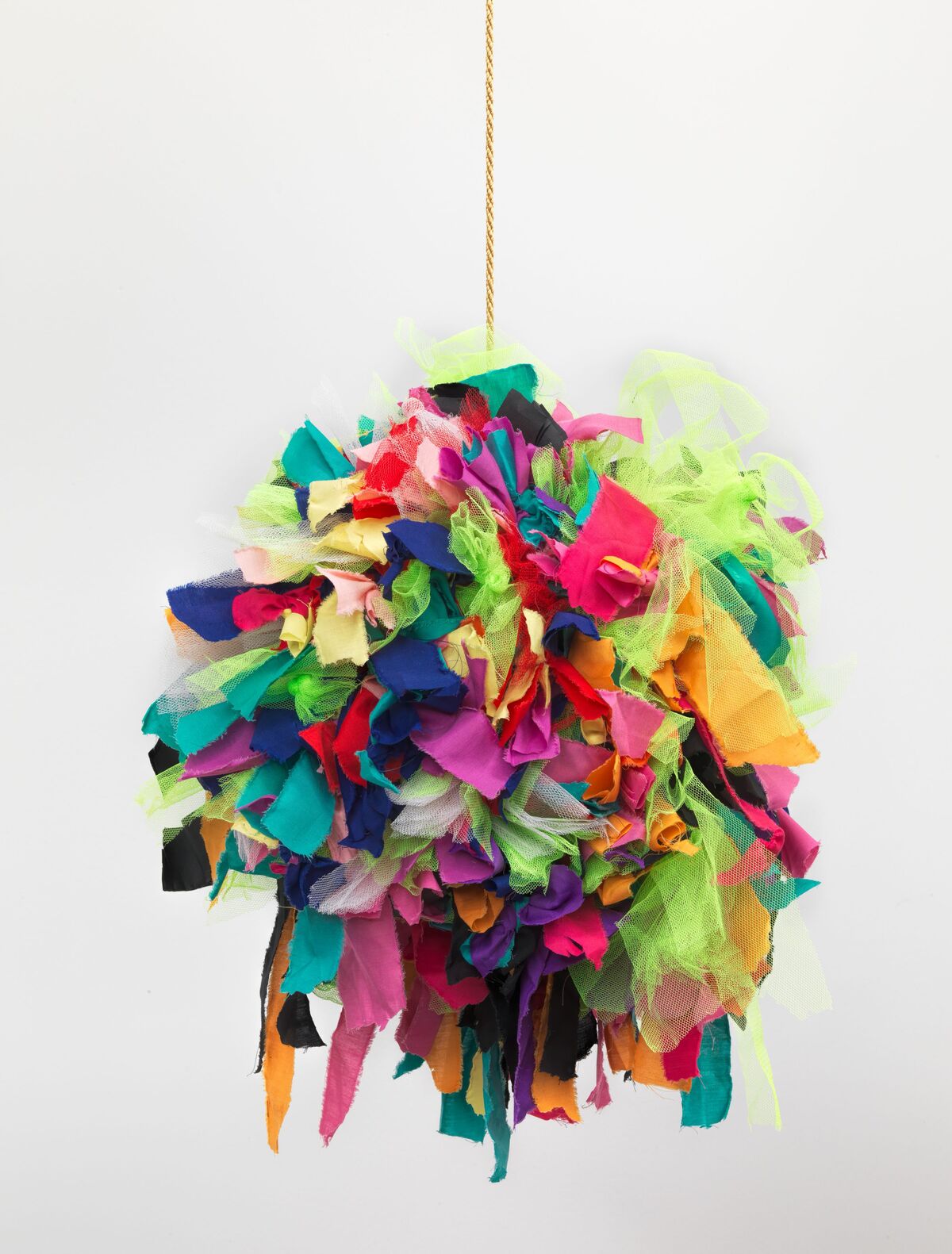 Advertisement
That said, walking around the cavernous main room of Object & Thing is also exceedingly pleasant. This is essentially a design fair, after all, and the attention to detail is impeccable. The “islands” themselves—minimalist structures that combine chunks of concrete, composite wood, semi-opaque plastic, and split ULINE fiber drums—are sculptural marvels in their own right. The overall effect is close to a very chic showroom, and that’s not a bad thing. Friday morning’s press and VIP opening was a civilized affair, relatively free of the boisterous opening-hour crowds typical of bigger fairs like Frieze New York. Object & Thing is notable for the absence of individual gallery reps—any questions are instead fielded by iPad-toting fair representatives—which eliminates some of the usual sales frenzy. (The streamlined buying experience seemed to be lost on one disgruntled art advisor at Friday’s preview, who was low-key hyperventilating over how he would negotiate his “professional discounts.”)
The center of the fair’s main space is taken up by a veritable army of chairs, a reminder that furniture and art are increasingly malleable categories. An eye-popping, $16,000 work from 2014 by Peter Shire—whose title, Pecker Meeny, sheds little light on whether it’s meant to be a chair or side table—serves as a resting place for a bunch of aluminum bananas by
Jonathan Trayte
. Several pieces of furniture by
Lucy Dodd
threaten to steal the show: shaggy pieces that look as if the artist has yarn-bombed an existing armature. Chain Chair Pair (2017), by
Liz Collins
and
Harry Allen
—two chairs bound together by purple rayon fabric, priced at $12,000—is the cheeky furniture equivalent to
Tehching Hseih
and Linda Montano’s iconic 1980s performance in which they remained tied together for an entire year.
3 Images
View Slideshow 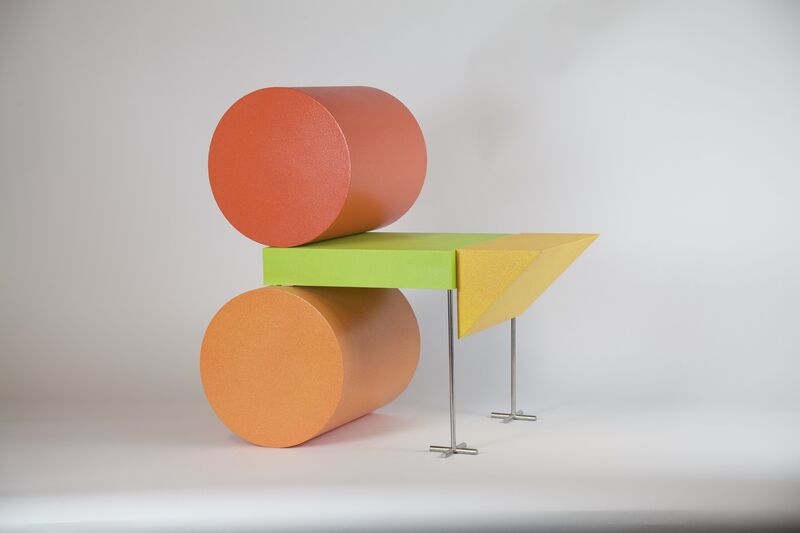 Elsewhere, playfulness is the order of the day. Don’t miss
Katie Stout
’s Girl Mirror (2017, $7,500), for which a ceramic female figure sprawls on her back, a circular mirror genty supported by her butt crack. Equally goofy and serious are a series of NASA-themed cups produced by
Tom Sachs
, some of them broken and fixed using the Japanese method of kintsugi. And a more literal spirit of play is everywhere at Object & Thing, with sculptural games of varying degrees of functionality. There are all-metal backgammon tables by
Zak Kitnick
, and a stunning, industrial-chic 1950s brass chess set by
Carl Auböck
that brings a hardware-store aesthetic to the cerebral pastime (yours for $6,800). Nearby, there’s a series of “games” by
Susan Cianciolo
, gloriously sloppy mixed-media assemblages that could be the arts and crafts project of a hippy cult’s pre-K class. Each of Ciancolo’s enigmatic, seemingly unplayable games—priced at $6,000 apiece—is as good a symbol as any for the pleasantly fuzzy grey zones that Object & Thing celebrates.

2 Images
View Slideshow
Anyone who isn’t down with all this category-crossing can rest easy: The fair also has plenty of vessels meant to hold flowers, or simply sit on a shelf looking pretty. Gaetano Pesce’s dramatic resin creations—root beer–colored goblets supported by wobbly, alien legs—are stand-outs. A vase-like sculpture by
Thaddeus Wolfe
(priced at $18,000) appears raw and tactile on its exterior—like chunks of colored soap stacked into a totem—but slick and polished on the inside. And two ceramic pieces by
Anton Alvarez
—including one that resembles a pile of flattened Play-Doh noodles—are reminders of how satisfying design can be when it looks like it’s on the verge of falling apart completely. 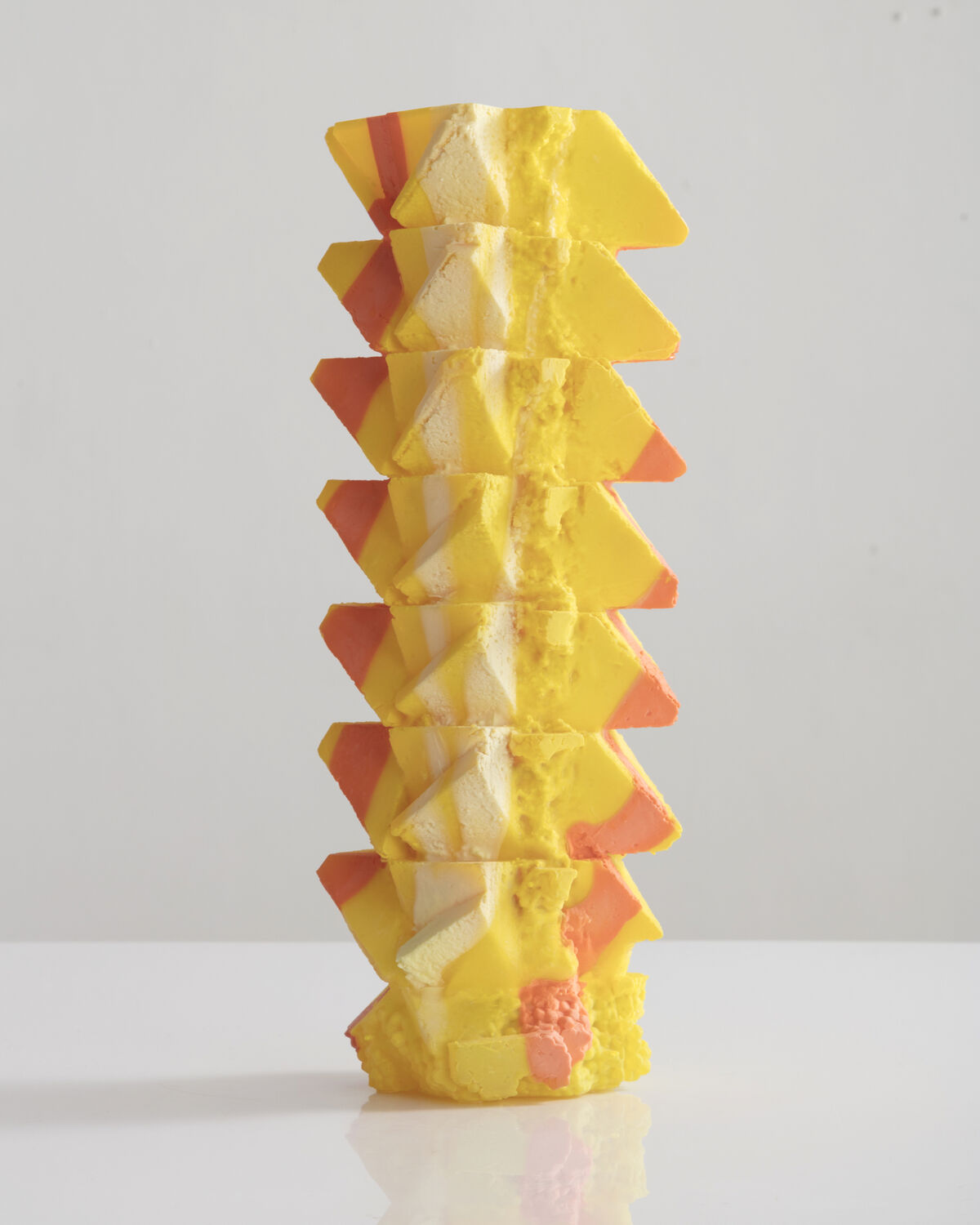 Still, it’s the objects that resist simple labeling that end up being the most interesting. A massive bench structure by
Marc Hundley
, priced at $25,000, is a good example. The artist (who is also a proficient carpenter) pairs the sort of seating structure you might find in a train station with a series of posters that appropriate imagery from
Ellsworth Kelly
,
Gilbert & George
, and others.
Phyllida Barlow
—the sculptor who represented Britain at the 2017 Venice Biennale—certainly wouldn’t consider herself a “designer,” and yet she’s represented at Object & Thing by pompom2014-3 (2014), a ragtag chandelier constructed out of fabric strips and priced at $28,000.
Occasionally, disparate worlds collide at Object & Thing.
Richard Hughes
’s Out Time (2012)—a fiberglass sculpture priced at $32,000 and featuring two drain pipes that evoke disembodied, crossed legs—hangs out next to a quintet of handblown-glass works by
Jeff Zimmerman
: beautiful squashed blobs adorned with crystals. What’s the art, and what’s the design? Spend a few hours at Object & Thing and you’ll feel silly for even asking such a hopelessly out-of-date question.
Scott Indrisek
Related Stories 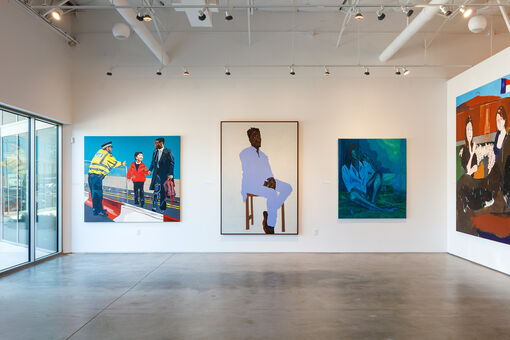 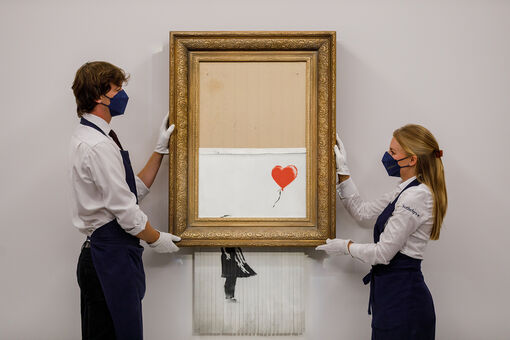 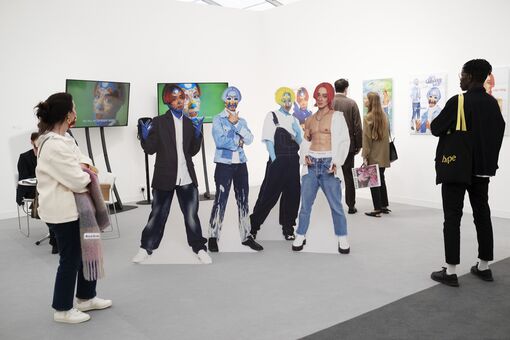 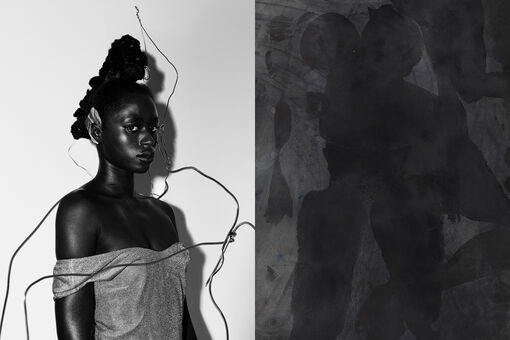