A New Graphic Novel about Basquiat Explores the Artist’s Life 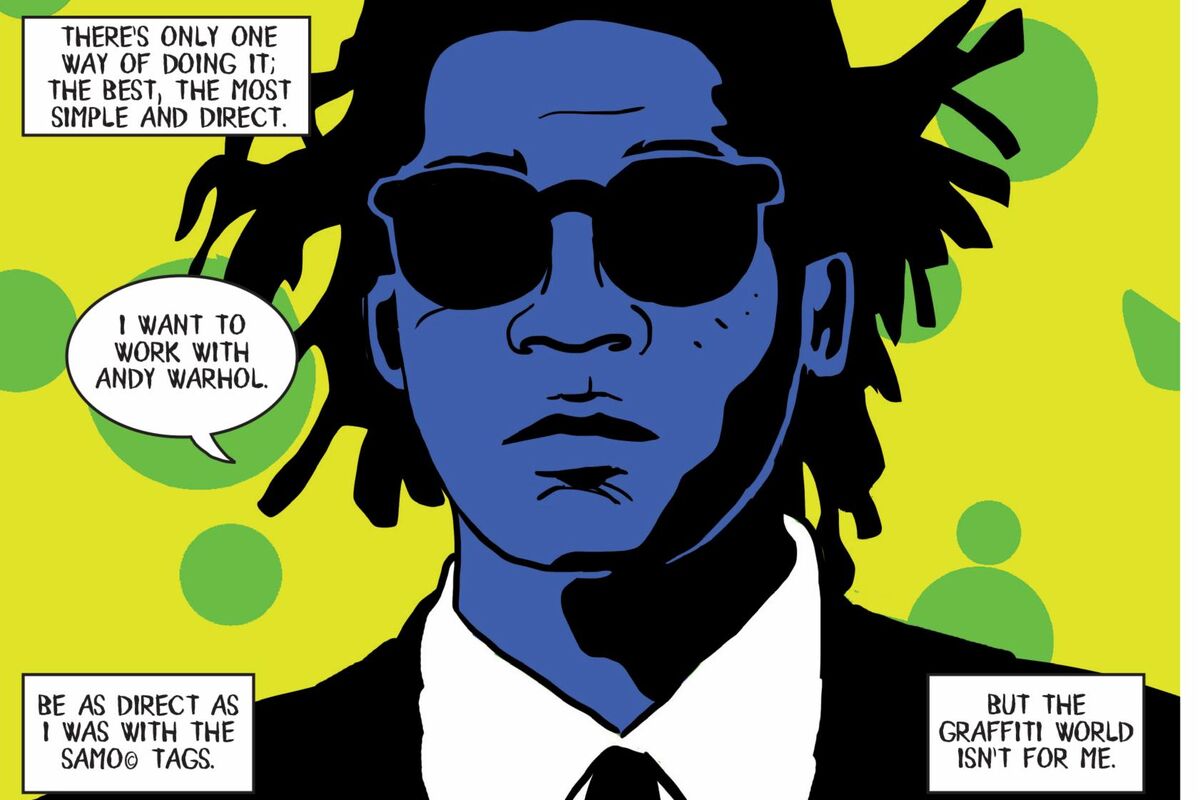 Like a murder mystery, a new graphic novel detailing the life of
Jean-Michel Basquiat
starts with the artist’s death, then rewinds to the beginning of the story. In Basquiat: A Graphic Novel (2019), Italian illustrator Paolo Parisi has distilled Basquiat’s story into bold, graphic colors—as he has previously done with musicians John Coltrane and Billie Holiday, both of whom also died too young.
Basquiat is the first visual artist to receive Parisi’s graphic treatment. The illustrator was drawn to him for his singular life. “Basquiat was a punk artist whose story is about breaking the canon of the creative process of art,” Parisi said. “His life was very short but lived intensely.” 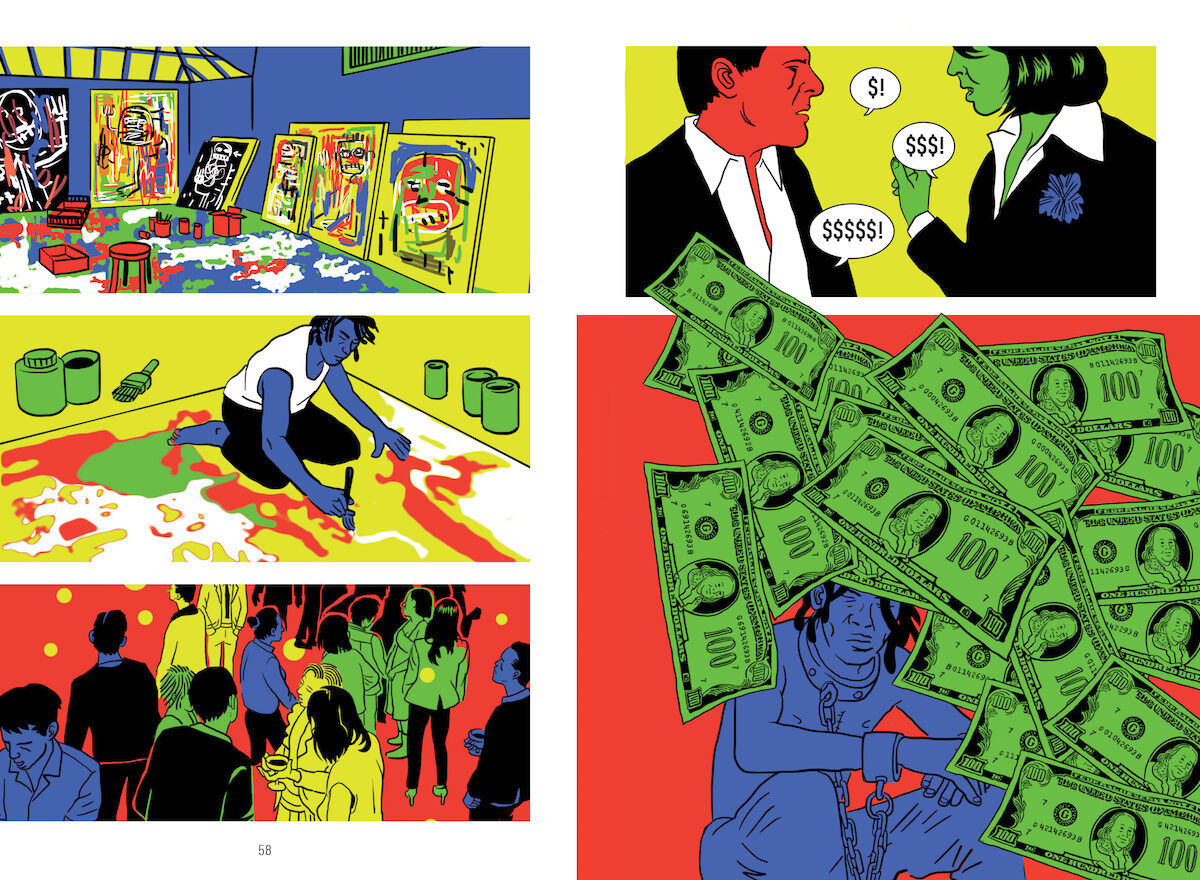 Parisi expresses this intensity in a limited palette of yellow, green, blue, and red—the hues that stood out to him in Basquiat’s early work. “In his early days, Basquiat preferred a strong contrast of colors,” Parisi noted.
Though Parisi writes in the foreword that he does his best to stay faithful to the events of Basquiat’s life, his is a creative retelling. In Parisi’s take, we jump back in time from Basquiat’s death at 27 years old, to when he got hit by a car at age 7. We learn about his family’s Haitian and Puerto Rican heritage, before plunging back into his home city, New York, to see a wide-eyed Basquiat at 18 years old, on the cusp of greatness. We follow him into train tunnels during his SAMO graffiti days; to the artist hotspot Mudd Club; and his career-launching group show at MoMA PS1. We see him on a flight to Zurich, where he breaks out lines of an unnamed illicit substance in first class; at
Andy Warhol
’s infamous Factory; and in Maui, which Parisi positions as a last-ditch effort to retreat from New York and start anew. In reality, traveling to Maui to withdraw from heroin was part of Basquiat’s continuous cycle of addiction. 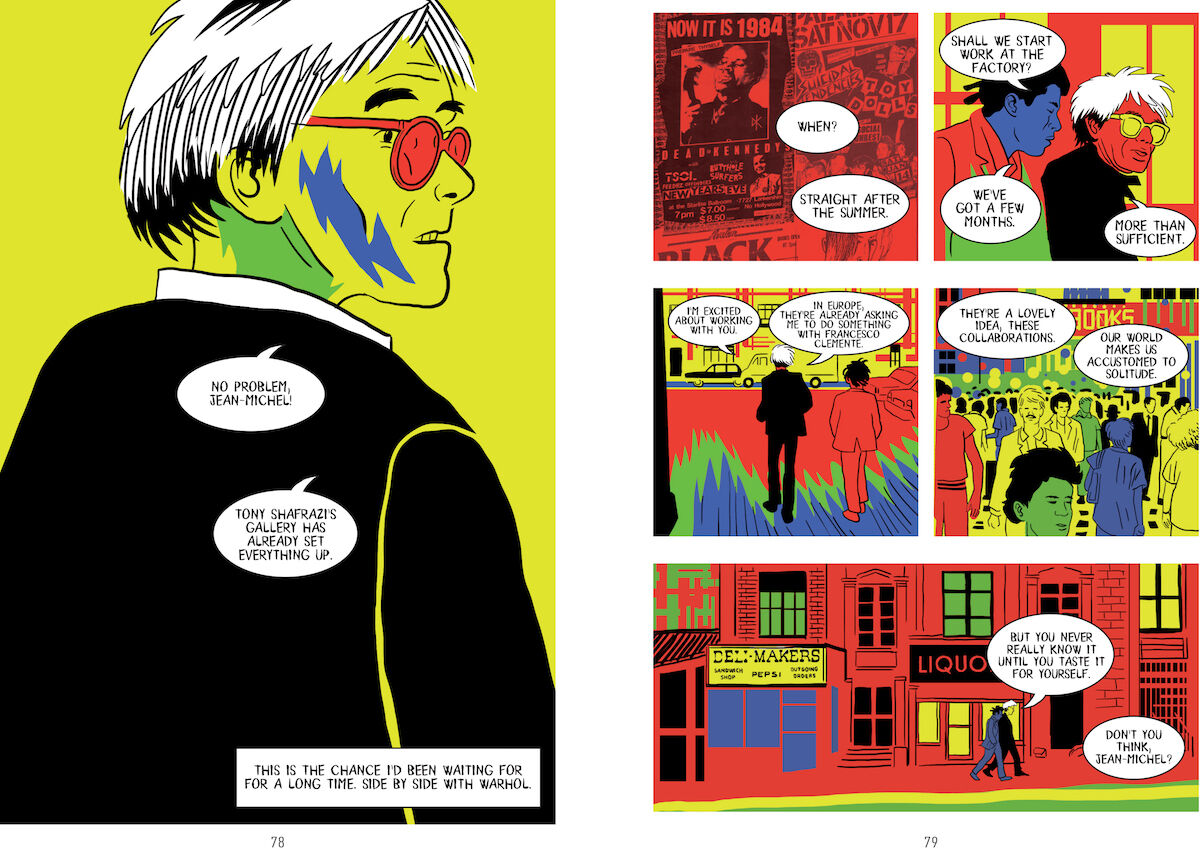 Advertisement
In the beginning, the artist’s rise to fame is often told by others who witnessed it: his father; his gallerist, Annina Nosei; his partner, Suzanne Mallouk; curator Diego Cortez; and art-world masterminds Mary Boone and Larry Gagosian. And indeed, as it is a graphic novel, there are villains. In Parisi’s story, Gagosian pushes a reluctant Boone to cash in on Basquiat and feed his soul to the snapping jaws of the 1980s New York art market. Warhol, after a tumultuous friendship, unceremoniously dumps Basquiat, insulting his protégé’s “stained Armani threads.” On the following page, Warhol wistfully wonders what the younger artist is doing next to a montage of Basquiat sex scenes. 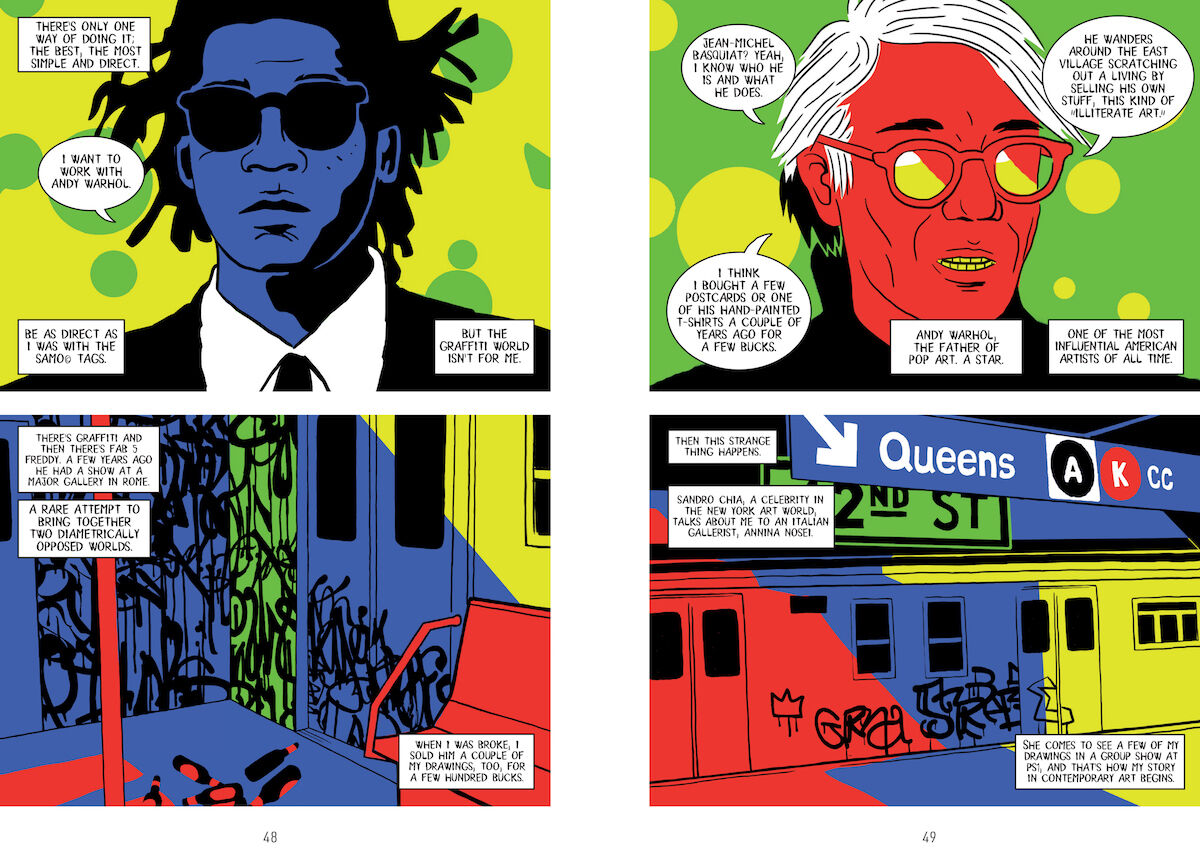 If those scenes don’t sound nuanced, they’re not. Parisi’s opinion on the downfall of Basquiat is clear, and he dutifully zooms through his biography to get there. His storytelling may be heavy-handed, but visually, it’s anything but staid. The illustrator’s limited palette doesn’t restrict his ability to depict scenes evoking mood, texture, and atmosphere. Parisi also breaks up the frames with simulated diary entries from Basquiat. “Basquiat wrote, drew, and painted compulsively, all the time, and everywhere,” he notes in the forward; the graphic novel reflects that. For the keen-eyed, there are also photographic Easter eggs—frames that reference specific Polaroids of Warhol and
Bruce Davidson
’s “Subway” series from 1980. 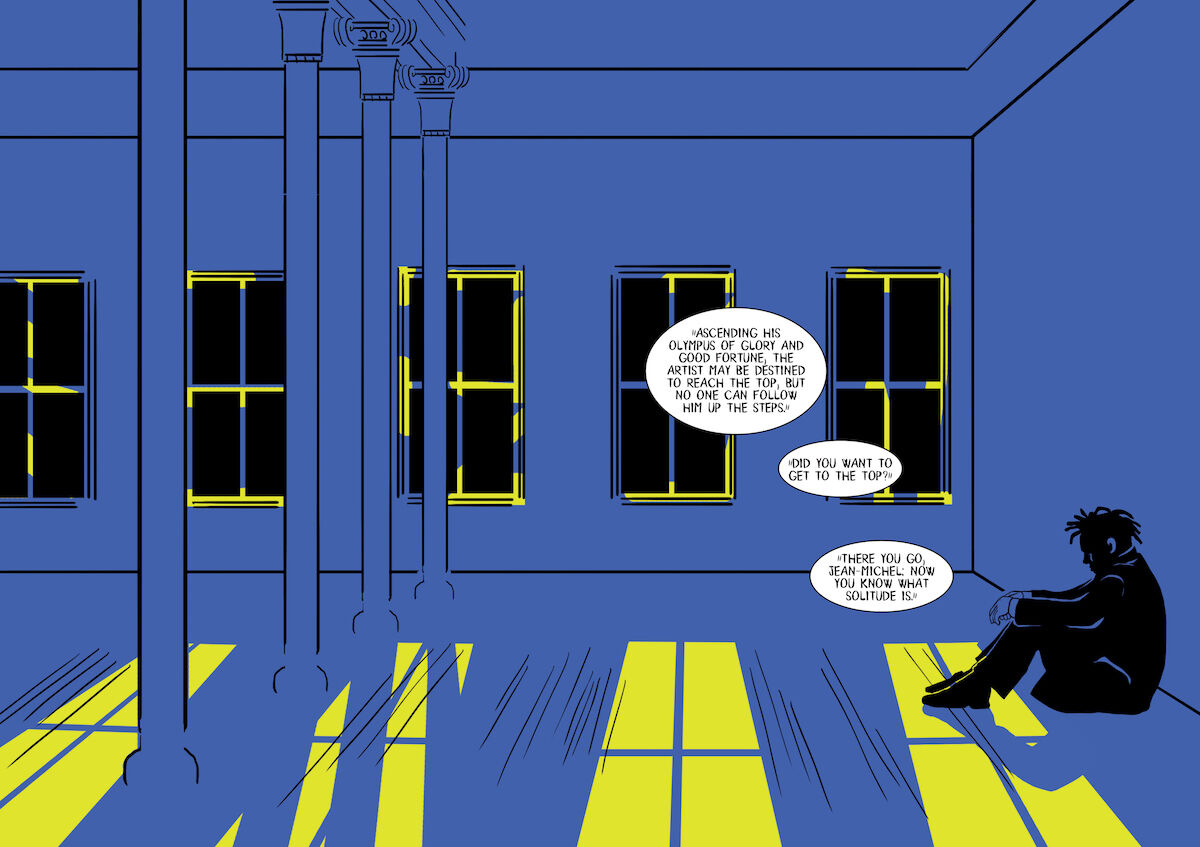 Basquiat’s life has been told in words, on the screen, and on the stage. As an artist who used to draw comics in his childhood, it makes sense to synthesize the details of his life into colorful storyboards. Parisi may use the pages to unfold the tragic drama of an artist lost to drugs, excess, and a predatory market, but he also wants to capture the artist’s spirit. “The whole book is a tribute to his genius,” Parisi said. “[It] is a celebration of the artist’s life, his art, and his way of being—transgressive and over the top.”
Jacqui Palumbo is a contributing writer for Artsy Editorial.
Related Stories