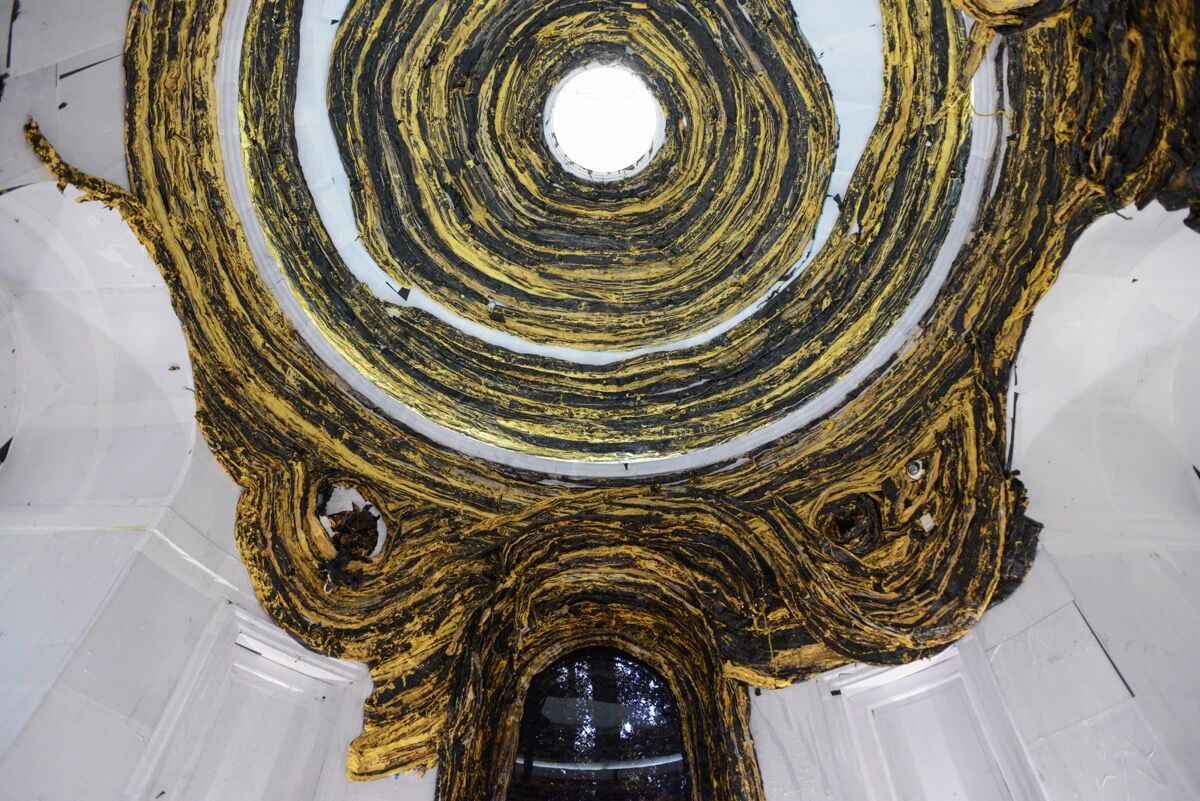 Installation view of work by Mark Bradford in the United States Pavilion at the 57th Venice Biennale, 2017. Photo by Casey Kelbaugh for Artsy.

For at least the past few iterations of the Venice Biennale, the inherent nationalist positioning of its national pavilions has seemed patently absurd.
As the golden age of globalization began to approach what now appears to have been its initial peak, in 2013, Germany and France swapped pavilions. That was a boon to
Anri Sala
’s installation, and an art-world high point for a borderless EU, the two nations denying viewers the ability to parse national identity by the name chiseled into the pavilions’ façades. In 2015,
Vincent Meessen
explored a new global solidarity by inviting a dozen or so international artists to the Belgian pavilion in express refusal of his country’s colonialist past, as well as the Giardini’s national framework, which Belgium sparked when it built the first nation-specific pavilion there in 1907.
Two years after that showing, we live in very different times. And this edition of the Venice Biennale proves instructive for its various relationships to and commentaries on the rise of a new nationalism across the globe, offering a way back to more palatable, less divisive ground.
Ground zero for a portion of this is the litter-strewn gravel outside
Mark Bradford
’s U.S. Pavilion, titled “Tomorrow is Another Day,” and the peeling paint applied to the Palladian building’s rotunda. While Bradford has said that he doesn’t intend the pavilion to represent his nation or even any universal experience of African Americans, it’s hard not to read the pavilion as a sort of ghost town of Barack Obama’s America, where some signs of progress or at least processing of injustices and prejudice are slowly being squeezed out of view by the python-like coil that fills the rotunda’s dome.
As much as Bradford’s pavilion reflects or at least exists within the context of an increasingly nationalist, isolationist, and authoritarian U.S. government that by the day takes two more steps back from what was an increasingly progressive society, Bradford’s pavilion is also the locuspoint of a step forward. The artist, who has long made the material support of progressive issues a part of his practice, is helping fund a Venetian organization called Rio Terà dei Pensieri for the next six years. The organization works to rehabilitate prisoners by providing them training in artisanal crafts and with jobs in the service industry. 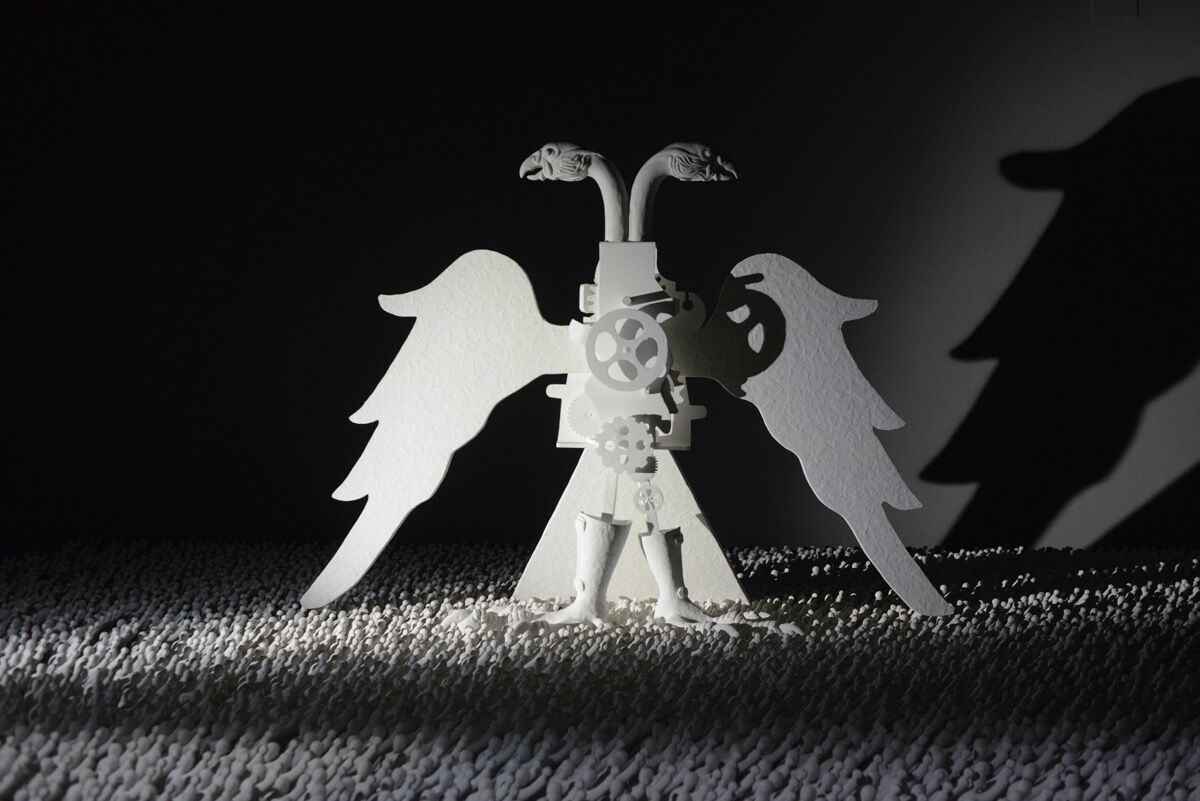 Installation view of work by Grisha Bruskin in the Russian Pavilion at the 57th Venice Biennale. Photograph by Casey Kelbaugh for Artsy.

The Russia Pavilion marshalls a very particular viewpoint on the current state of geopolitics in “Theatrum Orbis,” a show which is hard to leave without feeling the wink of curator Semyon Mikhailovsky come crashing down on you with the weight of a drawbridge. The three-part show opens with
Grisha Bruskin
’s installation of hundreds of white marching figurines, suspended fighter jets, and a two-headed bird that’s reminiscent of both Germany’s Bundesadler and the hammer and sickle.
The piece’s wall text sums up the outlook better than I could: “Scene Change is a game involving the contemporary world, from Syrian Palmyra to New York. The work is the metaphor of a new emerging world order where growing aggression, terror, the irrational life of the masses, and unprecedented control and monitoring strategies permeate the life of our contemporaries.” Are those marching figurines ISIS fighters or Wall Street bankers? Russia is not sure.
In the pavilion’s lower level, artist collective
Recycle Group
reimagines the ninth circle of hell in Dante’s Inferno as that which consumes the bodies of online spammers and hackers of varying threat levels, an augmented reality app letting viewers see the rest of the individuals’ bodies that don’t protrude from the blocks in which they’ve been cast. Should Wikileaks beware? 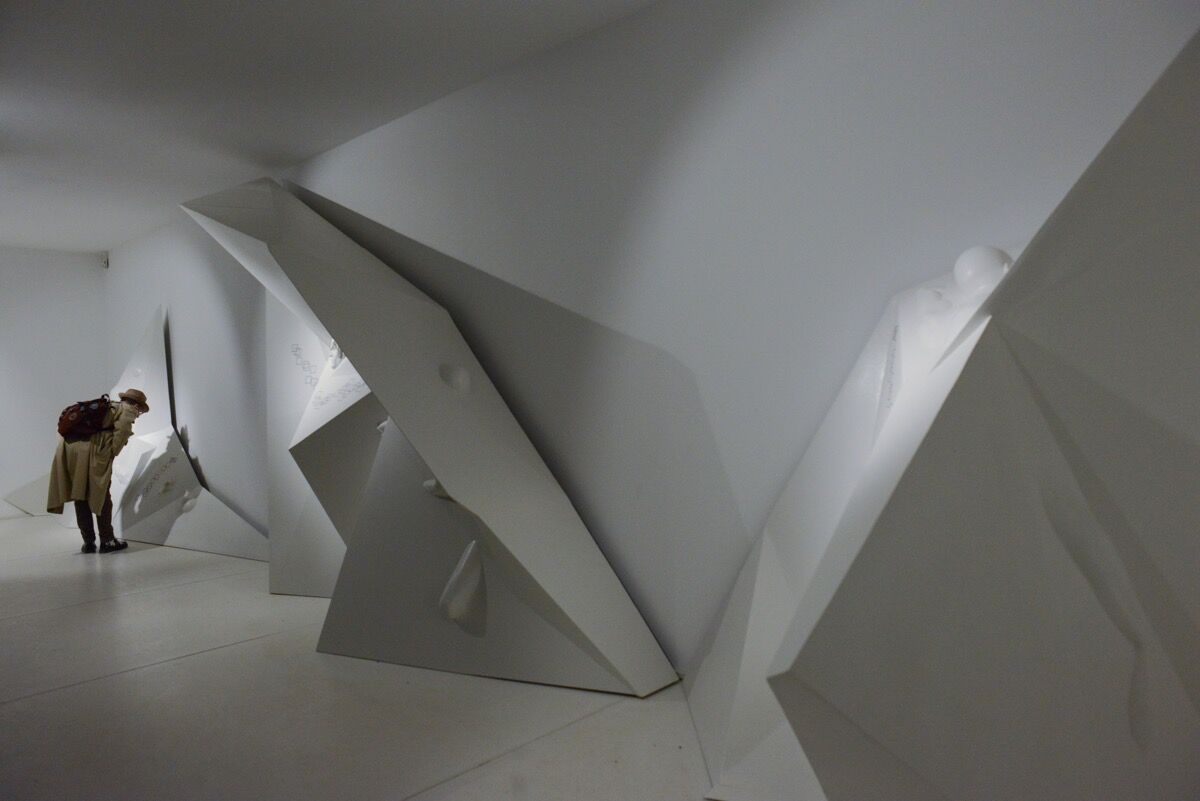 Installation view of work by the Recycle Group in the Russian Pavilion at the 57th Venice Biennale. Photograph by Casey Kelbaugh for Artsy.

Advertisement
Over in the far reaches of the Arsenale, the Chinese Pavilion offers the biennale’s most direct translation of policy into exhibition—but it’s one that seems six months out of step with China’s own international footing. As Chinese president Xi Jinping attempts to move his country ever more into the international order’s driver’s seat (one the U.S. president has sometimes relinquished in favor of the driver’s seat of an 18-wheeler) China's pavilion pushes forward a cultural policy Xi outlined in 2014 which asked artists to use their skills to support politics and the national interest.
To that end, “Continuum,” as China’s exhibition is called, eschews the idea of any singular artistic effort or individual project in favor of the concept of buxi (translated as “ceaselessly” or “unrelentingly”), which characterizes Chinese artistic output as one 5,000-year-long project. Curated by artist
Qiu Zhijie
, the show combines contemporary Chinese artists
Tang Nannan
and
Wu Jian’an
with traditional craft masters Yao Huifen and Wang Tianwen. 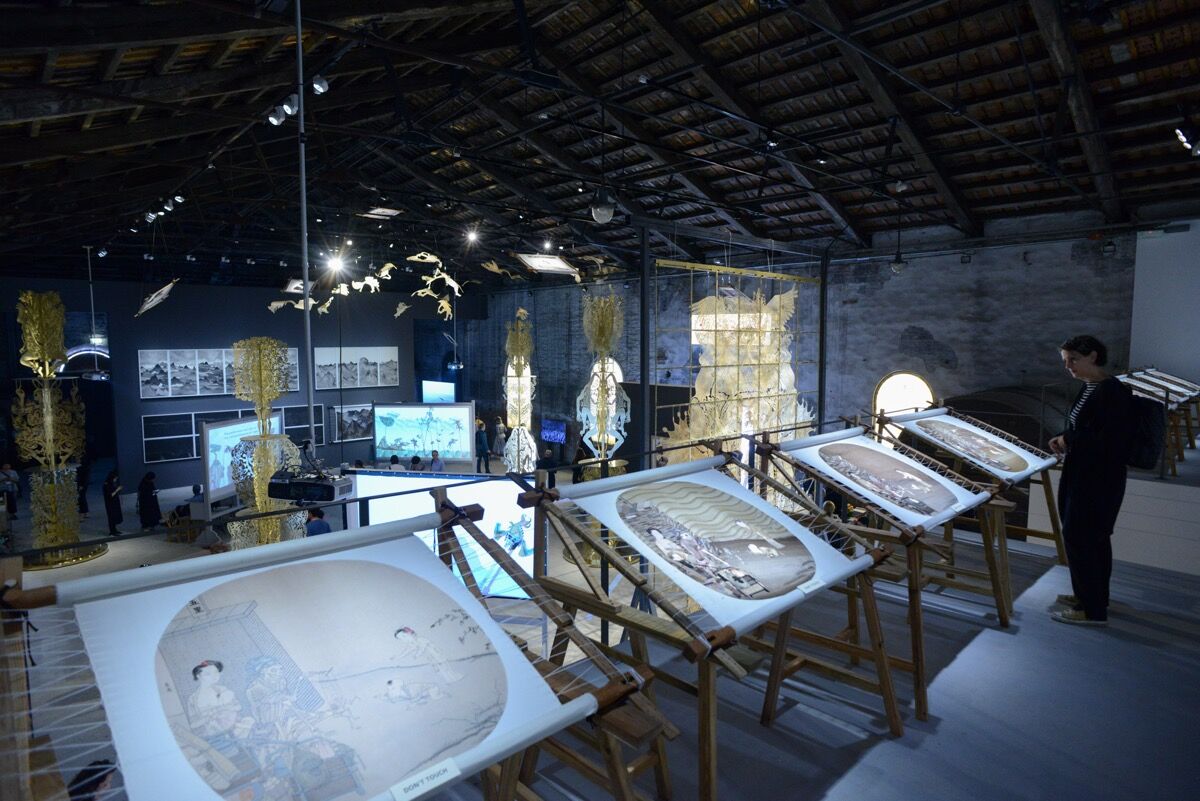 Installation view of the Chinese Pavilion at the 57th Venice Biennale, 2017. Photo by Casey Kelbaugh for Artsy.

The cyclical curatorial framework matches up well to the country’s resurgence—and to this being the Chinese Century; the show will likely be celebrated in Beijing. But the pavilion’s reliance on traditional art forms and instruments rubbed some prominent Chinese members of the art world that I spoke to the wrong way, failing to present the country's innovation—and its significant rise in artistic influence. A pavilion that serves politics and Chinese soft power in today’s geopolitical climate might have instead shifted to a more globally-minded stance (like Xi’s recent embrace of climate change policy at COP21) and foregrounded the work of artists like
Cao Fei
,
Li Ming
,
Lin Ke
,
Yu Honglei
, or
Guan Xiao
(whose video David (2013) is in “Viva Arte Viva”).
Korea, on the other hand, mounted an overt presentation of national pride and culture that turns its influence outward at the biennale this year to great effect. The pavilion asks, “How do individual stories relate to national histories? How might our understanding of this dynamic in the Korean context be relevant to the rest of the world and shed light on the future?”
Korean culture is hallmarked by a fervent adherence to collectivism over individualism. This interplay stands at the conceptual core of work by
Cody Choi
, an artist who gained prominence in the ’90s, and
Wan Lee
, who is nearly 20 years younger. Curator Lee Daehyung’s “Counterbalance: The Stone and the Mountain” casts individualism (represented with two 24-packs of Mountain Dew) as the influence of the West, which grew during Park Chung-hee’s rule (consequently the exact years between Choi’s and Lee’s respective births) through his pivot to an export-led economy, with Korean culture represented by a boulder of equal weight to the soda. 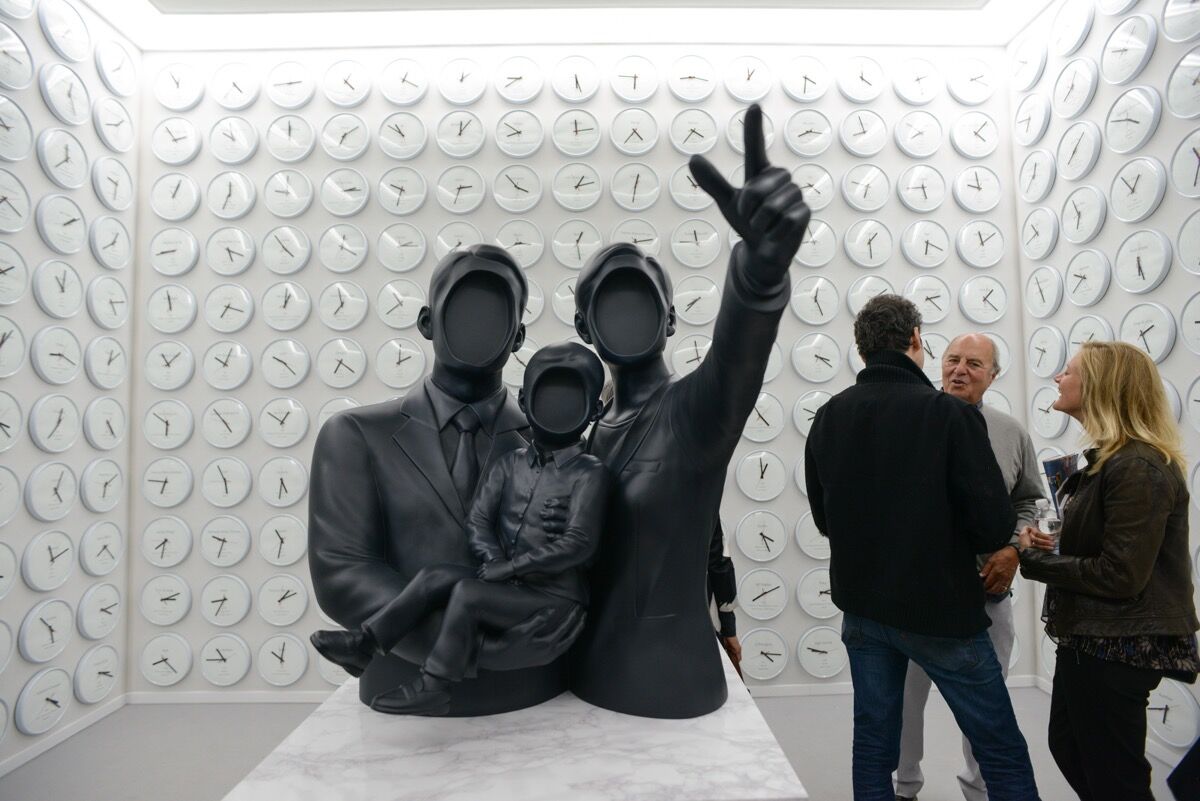 Installation view of Wan Lee, Proper Time, 2017, at the Korean Pavilion at the 57th Venice Biennale. Photo by Casey Kelbaugh for Artsy.

Lee’s socialist-realist-style sculpture of a Korean family (For a Better Tomorrow, 2017) is made from plastic rather than bronze and sits on a fake marble plinth. But the family member’s faces are hollowed out, which the curator said is meant to remind Koreans not to lose the core of their identity in service of globalization and economic growth. It’s a curious form of nationalism that could well have positive effects if Korean collectivity could be exported the world over, a pride of country and of community not in opposition to others but in conversation with others—and, perhaps, over time, as a single, global collective entity that recognizes that the struggles of a Syrian migrant are not so different from those of an unemployed factory worker.
Tunisia took a step in that direction with its unconventional pavilion, “The Absence of Paths.” Initiated by Lina Lazaar, the pavilion has allowed unsuccessful migrants from the country to come to Venice on a tourist visa. (While the migrants working Tunisia’s kiosks are required to go home once their visas expire, Lazar is working through official channels in hopes of Italy allowing them to stay.) At the pavilion in the Arsenale and at two other kiosks nearby, the migrants distribute “Freesas,” a faux-visa or “universal travel document” that participants activate with their thumb print. Freesa distributors validate the documents with a stamp that reads “Only Human.”
All who accept the Freesa are indicated as having migrant status. The significance of this is driven home by the embossed, metallic image of Pangea on the visa’s upper right-hand corner: At some point in time, our ancestors moved from one place to another uninhibited by national borders. It’s a slice to the jugular of an Us-versus-Them, mercantilist politico-economic worldview. It does not profess that we all need to be the same, only that we’re more similar than different, and should act like it. 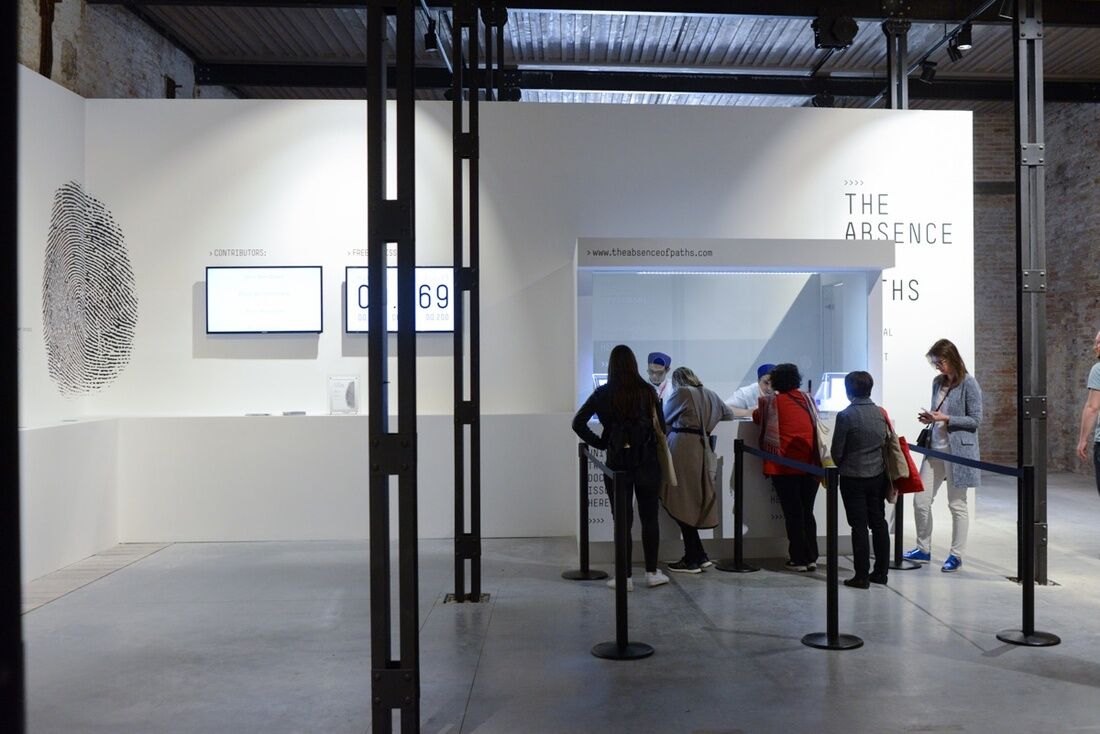 Installation view of the Tunisian Pavilion at the 57th Venice Biennale, 2017. Photo by Casey Kelbaugh for Artsy.

This approach is driven home by Macel’s curatorial approach in “Viva Arte Viva.” Some of the artist-driven, artist-celebrating show’s sections are far too broad to be useful as a frame. But where it does make a point—about, say, the rise of spirituality and collectivity—what it does incredibly well is doing so in as many ways as possible. At nearly every juncture, particularly in the Arsenale, Macel shows artists from a wide range of generations, working in nearly every medium, and addressing similar issues.
This acceptance on her part of a much wider spectrum of taste—that an artwork that looks and feels very different than another can hit home a similar point, with similar strength, to two different people—is instructive if you look at both the Biennale as a whole and our current global political landscape. It offers a different idea of national and personal identity, one in which art and culture should be viewed as a means of expressing a baseline human characteristic, inquiry, or need in a way that is most immediately relatable to an individual’s social group—rather than as an end itself to be compared. A similar view could be taken on other social cues like race, gender, economic status, and religion, as expressions of our DNA or of the entirely random process by which one person ends up being born in a particular place at a particular time.
If we took that view, Venice Biennale visitors’ Freesas might be valid a lot sooner than it currently appears will be the case.
Alexander Forbes is Artsy’s Consumer Marketplace Strategist. He was previously the Executive Editor of Artsy Editorial.
Related Stories