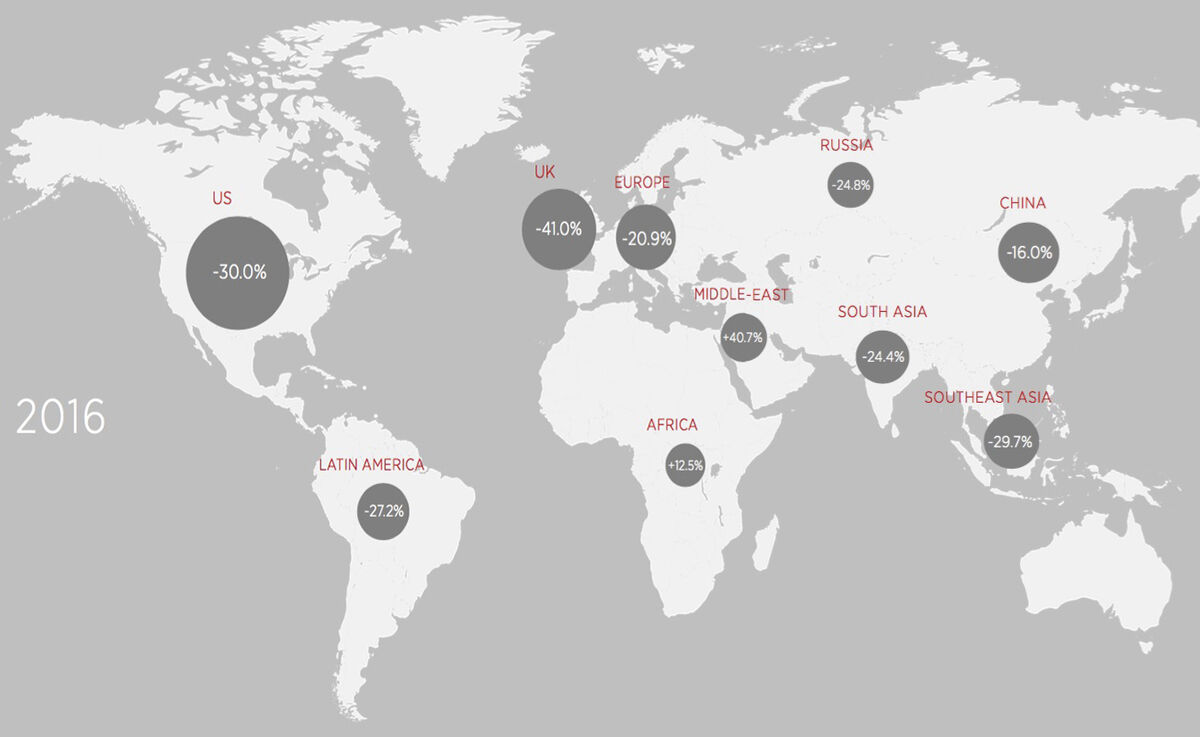 Here’s a sentiment you probably haven’t heard in awhile: “2017 may actually be a very stable, nice year.”
That’s the conclusion drawn by Doug Woodham, former Christie’s president of the Americas, from this year’s ArtTactic Global Art Market Outlook, released this week. Amidst the current political turmoil and economic uncertainty, he said, the art market could be an island of stability.
Of course, art market players aren’t oblivious to the current state of affairs; political and economic uncertainty ranked highest on 2017’s list of risks to the art market. And while stock markets have been rising despite the unexpected results of the Brexit referendum and the U.S. election, “there’s also a deeply emotional aspect” to art buying, said Anders Petterson, founder and managing director of ArtTactic, noting that the global art-collecting elite could be feeling shaken by geopolitical events.
Still, the overall tone, which surveyed 182 art-world participants, including collectors, advisors, dealers, and auction house professionals, was what you might call “cautiously optimistic.” Here are five key takeaways from the report.

Things are looking up

The survey found a positive outlook across all 10 regional markets it surveyed, with the most positive sentiment emanating from Africa, South Asia, the U.S., and Latin America. Overall, 59% of those surveyed described the global outlook for 2017 as positive, and only 8% as negative. That’s a substantial 18-percentage-point increase in optimistic sentiment from January 2016, but a marginally less rosy outlook than two years prior, when 66% of those surveyed were optimistic about the prospects for what turned out to be a disappointing year.
Many factors are in place to further induce the “wealth effect” that can bolster art buying, especially in the U.S., the largest art market by value. Those include rising equity markets, as well as rising home prices and low unemployment. The International Monetary Fund recently increased its forecasted GDP growth in the U.S. to 2.3% in 2017 and 2.5% in 2018. And an improving macroeconomic environment could give collectors additional psychological impetus to buy.
“Art is entirely a discretionary purchase,” said Woodham. “People need to feel comfortable with their wealth position to buy art.” Furthermore, the current low-interest rate environment makes a non-interest-bearing asset like art more attractive to own, although he warns that could shift if interest rates move up significantly, something the U.S. Federal Reserve has indicated is on the horizon.
One last reason for the optimism? It can’t possibly get any worse than 2016. Last year “was quite a difficult, challenging year for the art market,”  said Petterson, and many art market players feel “the market has bottomed out.”

The lower end of the market could stabilize

Optimism regarding the more accessible segment of the art market—works priced below $10,000—swelled for 2017, rising to 56% from 44% in 2016. Woodham said some of that momentum could be driven by what he calls “nesters,” people are looking to fill the walls of a newly bought or renovated property.
“They live in a world where they’re aware of art and they want to own some meaningful art,” he said, such as a print or a work by an emerging artist.
Optimism grew in every segment except at the very top. There are several explanations for this, one being that supply for works about $1 million may take longer to recover than demand at lower price points and that collectors may feel comfortable enough in a rising market to move away from relatively low-risk masterworks and back to pieces in the middle of the market and by emerging artists.

The top end is flattening

Meanwhile, at the high end of the market (works valued at $1 million and above), sentiment turned neutral. Just over half of those surveyed saw that segment flattening out in 2017, compared with a third in 2016. A smaller share was optimistic that segment of the market will rise, down to 37% from 46%.
Woodham said a series of auctions in which lots sold at their minimum bid is keeping discretionary sellers on the sidelines. Those who can afford to hold on to their works are likely waiting for a major sign of confidence in the market before jumping back in, or are looking to private sales where they have more control over pricing.

Uncertainty looms in the background

Political and economic uncertainty are once again the headline risks for 2017, only this year they switched places (for 2016, economic uncertainty was at the top). The name “Trump” appears eight times in ArtTactic’s 15-page report, and it cites “a new level of political and economic uncertainty” that “is likely to dominate the world in 2017, something that could have serious ramifications for the confidence in the art market in years to come.” The report also highlights rising populism across Europe and its influence in upcoming elections in France, Germany, and the Netherlands as factors likely to intensify the political uncertainty in the air.

Art businesses continue to pursue strategic opportunities in other markets

In 2016, auction sales of modern and contemporary art in the U.S. and U.K. dropped by 30% and 41%, respectively, according to the report. Although sentiment was still mostly positive-to-neutral for those two major markets, Petterson said he saw auction houses and large galleries looking to build up their presence in other regions, and target specific buyers from emerging markets. He cited the rescheduling this year of the auction houses’ February London sales to avoid clashing with Chinese New Year celebrations as one way they were adjusting.“There are these signs of opportunities in the market despite the difficult political environment,” he said.And despite the anti-globalization sentiment (“global citizen” has almost become a pejorative, Petterson, a Norwegian living in London, noted), it is institutions like Christie’s or Sotheby’s that are best poised to pursue a global strategy, thanks to their existing global footprints and their staffs’ wide-ranging expertise.“To compete in today’s world, where you need a presence in loads of markets [and the ability to] adapt to many buyers’ motivations, you have to have resources and the auction houses probably have the upper hand at the moment,” he said.Blue-chip galleries are putting up a good fight, too, through art fairs and global expansions, but he noted this type of hyper-competitive environment put smaller and medium-sized galleries at a disadvantage. Instead, one sees “a small group of very big galleries dominating the marketplace, then it’s a very long drop down” to the second tier.

When the theme of the year is uncertainty, it’s definitionally hard to say what the future holds. There are a few signs that hint at where the market could head. Christie’s reported that nearly one-third of its buyers in 2016 were new ones, up from 5% in 2015, according to the New York Times. This could suggest that the house is finding success in its pursuit of collectors from new markets. Another hopeful data point in a year that saw a 16% decline in overall sales was its 109% growth in online-only sales, which reached £49.8 million (still a tiny share of the total £4 billion the house sold last year).
In the meantime, the art market has forces pulling it in two directions. On the upside, there’s the likelihood that a lucky few will benefit from a business-friendly environment in the U.S., stoking their appetite for buying. On the downside, geopolitical risks are scattered across the global landscape, from the U.S.’s erratic foreign policy and mercurial tax reform strategy, to Brexit’s murky outcome, to the threat of terrorism and conflict.
“The political uncertainty is hanging over us,” said Petterson. “If it plays out badly, then it will have an impact. If it just sits there, then the market will just plod along.”
Anna Louie Sussman
Related Stories