Nearly $20,000 Wage Gap between Men and Women Working in the Arts, Study Finds

Betty Tompkins
Working Woman, 2016
P.P.O.W
Women working across arts professions make almost $20,000 less per year than men, before controlling for other factors. The statistic comes courtesy of a study published in the December issue of Social Currents, which examined the salaries of individuals working in the arts—spanning from more corporate roles to visual artists, writers, and dancers. It is similar to the gender pay gap endemic across the American working world. Women in the United States make only 79 cents for every dollar earned by men.
The study’s findings are based on a survey of over 33,000 individuals with degrees in the arts. It shows stark realities underneath the otherwise progressive rhetoric and perception of the creative sector. While liberal norms and socially progressive attitudes tend to dominate the arts discourse, when it comes to pay the field resembles those traditionally viewed as more conservative.
The study did find working in the arts offers some benefits to women not found in other fields, specifically for mothers. Generally, research shows that having a child as a woman incurs what is known as a “motherhood penalty.” Mothers typically make less money than women without kids. But when focusing on the arts, this study found no such career disadvantage. By way of explanation, the authors point to the flexibility of artistic careers, which are characterized by “project-based labor markets and periods of self-employment.”
That finding is in line with anecdotal evidence. Artists often cite the relatively loose and self-determined hours of the art world as an important benefit allowing them to continue their careers after having a child. The study notes that other fields can look to the arts for guidance in this area when crafting policies that reduce workplace pay imbalances.
Other aspects of the study cast doubt on the idea that the absence of the so-called “motherhood penalty” for those working in the arts is the result of the sector’s liberal viewpoints. The study finds, for example, that men in the arts continue to see a “marriage premium”—an increase in pay for married men of roughly $7,200 per year that neither women nor single men experience. Men also receive an income bump when they become fathers, according to the study. Each dependent increases a man’s earnings by roughly $8,000. So while women working in the arts aren’t economically penalized for having children as they might be in other fields, they don’t experience the same benefits that men do.
The study’s lead-author, Danielle Lindemann (a Lehigh University sociologist), and her collaborators Carly Rush and Steven Tepper, used data from the 2011 Strategic National Arts Alumni Project (SNAAP) to generate their findings. About 33,801 people supplied information to this nationwide survey of individuals with degrees in the arts. Of that group, roughly 16,000 didn’t work in the arts sector but held arts-related degrees. A further 7,680 people worked as artistic professionals—a designation that included visuals artists, designers, musicians, dancers, writers, actors, and other similar professions in the for-profit and nonprofit sectors. Using the survey responses, the study’s authors compared the incomes of those working inside and outside the arts, and found roughly similar gendered wage gaps.
Focusing in on the group of arts professionals, the study found that “artistic careers are subject to some of the same social forces that drive disparity in other occupational realms.” While men in the arts earn a mean income of $63,061, women earn $43,177. The gap lessened to $13,406.77 when controlling for additional factors that could impact pay other than gender across the wide ranging fields of artistic work. The study showed major pay differences between those working in the for-profit and nonprofit arts sectors, with those employed in the nonprofit industry seeing their predicted income decrease by nearly $12,000 compared to those at for-profit companies. While men working in the nonprofit sector earn roughly $17,000 less than men employed in the for-profit sector, the disparity is around $7,200 for women.
This difference is likely attributable to the fact that women are already earning less than men, meaning their income is closer to the wage floor, and thus their wages have less room to fall until they hit the very bottom income rung in the arts sector. As such, the authors note, “this finding underscores how little women are earning relative to men across sectors.” The authors also found that government jobs tend to be the least discriminatory when it comes to pay gaps in the arts, a result in line with labor research more broadly.
As the study itself notes, there is more research to be done. Simply due to the realities of the data set, the exact causes of the wage gap, such as promotion or hiring, could not be determined. And though the study controlled for a respondent’s general field of work, it didn’t compare positions within those fields. The study also looked only at those in the arts with a college degree. This underlying parameter helped the authors narrow their focus and compare men and women with similar educational backgrounds. But, because of that focus, the analysis can’t speak to wage imbalances in the arts for people without college degrees.
This study is one of many showing that women in the arts are at an economic disadvantage compared to their male colleagues. Most visibly, for example, women artists’ work sells for much less than that of comparable male artists at auction. When it comes to institutional power, women in the United States hold only a quarter of museum directorships. Across the pond, the picture is just as bad. An ArtsProfessional salary survey in the UK found “the gender pay gap in the arts sector is greater than the national average, with women earning up to £5,000 less than men at a similar stage in their careers, despite being better educated.” This held across almost every type of job, art form, region, and age, with the disparity getting worse over time.
Isaac Kaplan is an Associate Editor at Artsy.
Related Stories

You Can Be a Mother and Still Be a Successful Artist 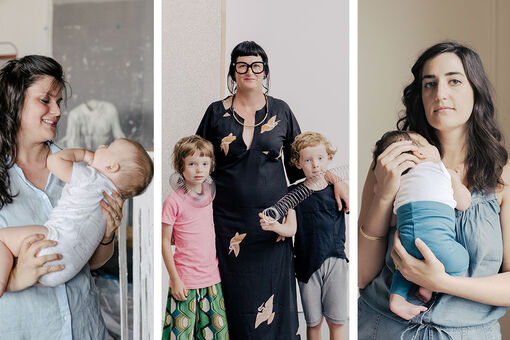 You Can Be a Mother and Still Be a Successful Artist
Artsy Editors
Aug 24, 2016