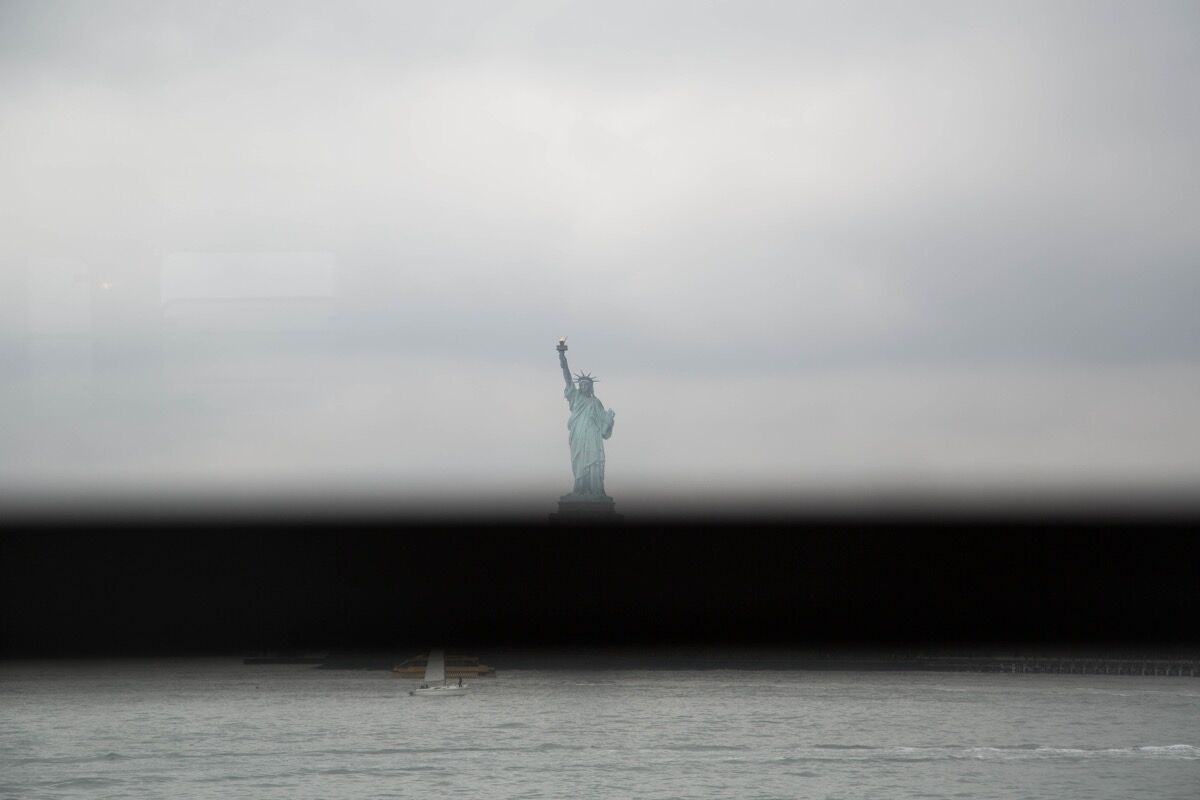 Nona Faustine, Fragment of Evidence, Statue Of Liberty, 2016. Image courtesy of the artist.

Born and raised in New York, photographer
Nona Faustine
catches a glimpse of the Statue of Liberty from afar on every train ride across the Manhattan Bridge. “I really see the Statue of Liberty being that symbolic icon that ties everything together,” Faustine tells me over the phone. “It got me thinking about freedom in this difficult time in our country, in this time of change.” Indeed, as a welcome sight to millions of immigrants to the United States since its installment in the New York Harbor in 1886, it represents many of the values—freedom, democracy, and multiculturalism—that have been thrown into uncertainty by this year’s polarizing presidential election.
While passing by Ellis Island on a recent excursion on the Staten Island Ferry, Faustine snapped a photograph of the monument from her window seat. The resulting image depicts the crowned figure isolated on the horizon and lifting her torch into a bleak, cloudless sky; the frame of the window juts through the horizon line, leaving a black void in place of the statue’s pedestal. “It seemed as if freedom, in that picture, was disappearing,” she says.
In 2013, Faustine gained international recognition for “White Shoes,” a series of photographs in which she posed completely nude, save for a pair of white heels, in sites across New York City where slaves were once traded or buried. Her exhibition “My Country,” on view at Baxter Street at the Camera Club of New York, debuts new works from the series, the result of her ongoing research into the city’s swiftly overlooked slaveholding past. Powerful and austere, these images remind us that New York—despite the notion that the city, with its diverse population and cosmopolitan outlook, is removed from the rest of American history—depended on slave labor for much of its early economic development. In colonial-era Manhattan, one out of five New Yorkers was an enslaved African; 40% of households (and up to 70% in one affluent area of Lower Manhattan) owned slaves. The Municipal Slave Market operated on what is now Wall Street, between Pearl and Water Streets, from 1711 to 1762. 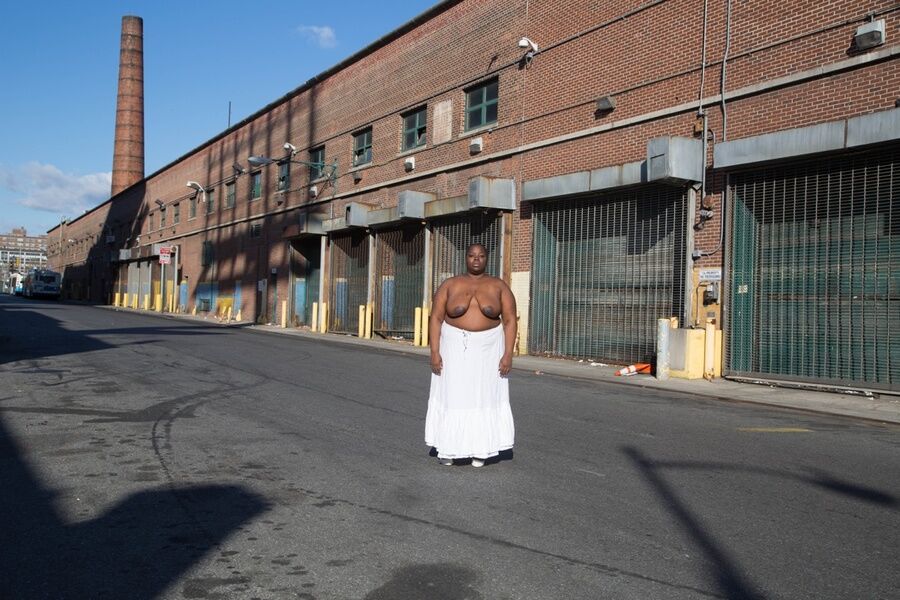 Her black body, posing naked at these seemingly innocent sites, serves as a stunning visual reminder of their shameful hidden histories. “I go to these sites, and for a brief moment, I memorialize what was lost, and who was there, and mark that spot.” One image sees the photographer posing in a long white skirt at the MTA Bus Depot in Harlem, the site of of a former African Burial Ground. Others commemorate heroic figures, such as Sojourner Truth. Standing outside of the abolitionist’s former home on 74 Canal Street, she holds a sign that reads “Ain’t I A Woman?” in reference to her famous 1851 speech, a powerful expression of women’s rights and an enduring emblem of strong, independent womanhood.
In another image, she gazes up at the bronze statue of George Washington on the steps of Federal Hall, the site of his inauguration in 1789. Washington, she reminds me, was a slaveowner himself, yet this fact is eerily eclipsed in the history books, statues, and monuments that memorialize the nation’s first president. While focusing on the complicated legacy of the Statue of Liberty, Faustine also took her camera to the capital, where she turned her lens on some of the nation’s most visible memorials, including the Jefferson Memorial, the Washington Monument, and the White House. The stark, simple images, all obscured or disrupted in a similar fashion, strip the landmarks of their glory. “I live in a city and a country that are filled with monuments and icons of all sorts—mostly to white men,” she says. “They convey their history. It’s a one-sided legacy.” It’s this imbalance that Faustine also confronts in her self-portraits, which demand that we remember the histories that remain otherwise invisible on the streets of New York today. 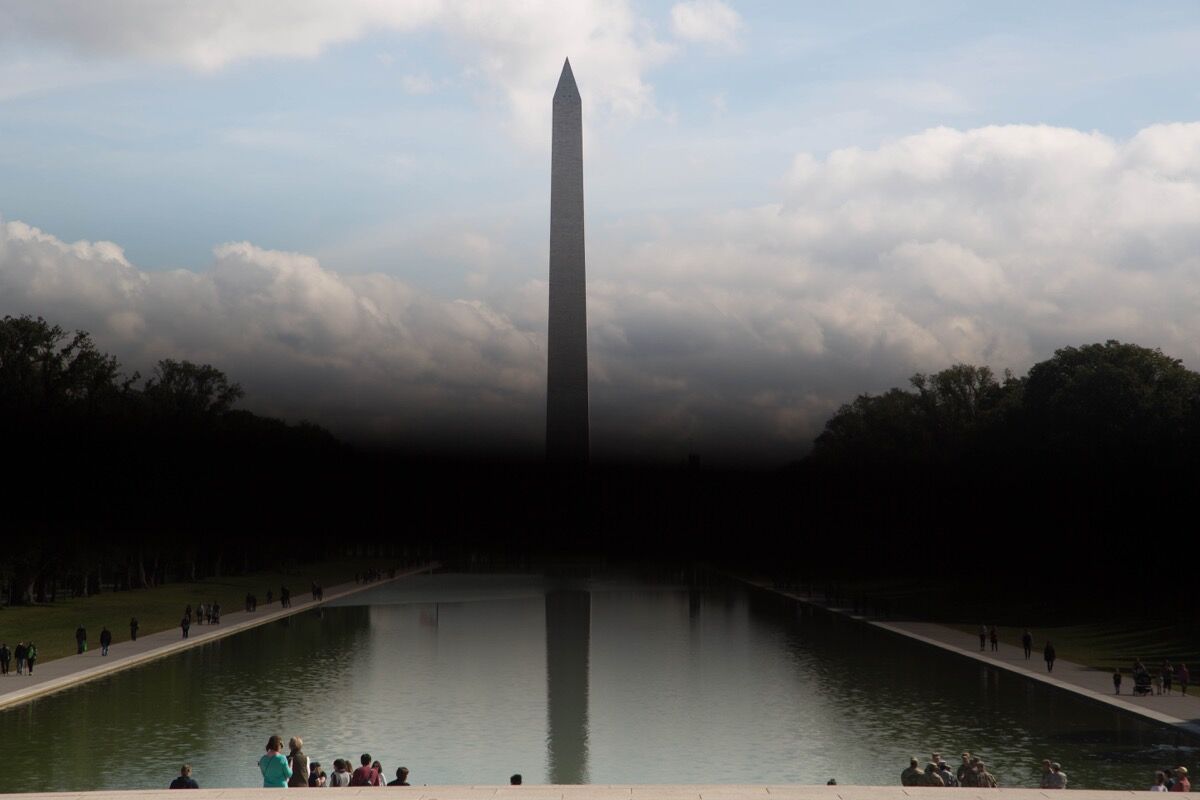 Advertisement
Faustine says that the title of her exhibition, “My Country,” is partly an affirmation for the communities who are feeling down-trodden by the 2016 election. “This is the only country I know. My daughter is half-Chinese, and I think about what America means to the Chinese and to every immigrant who has come here. Isn’t it their country too?” she asks. “For me, it’s a claim. I am American, this is my country.”
Demie Kim
Related Stories