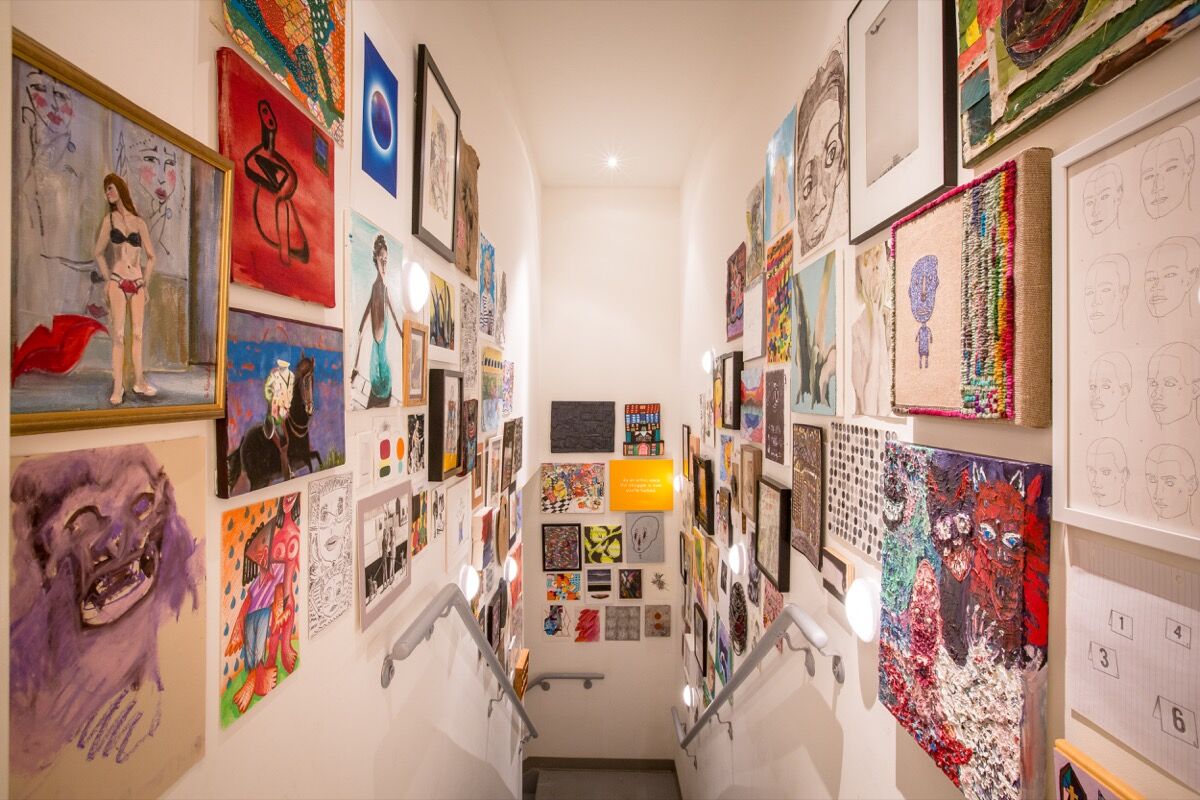 The premise of the open call was simple: Any person, regardless of age, training, or reputation could submit an artwork and every submission received would be included in the show. The only restriction specified was that the work must fit into a 16-by-20-inch envelope. Curator Jamie Sterns and gallery founder Andrew Edlin dubbed the experiment “Et Tu, Art Brute?” They announced that submissions were open, and waited, not really knowing what to expect. “We were saying if we got 200 submissions, we’d be happy,” Edlin said
Then the packages began to arrive. In something of a reverse Santa Claus scenario, mail poured in from all over the world, sent from places as far-flung Japan, Australia, Brazil, Switzerland, Nova Scotia, and Greece. Others came from myriad towns in the U.S., from Fairfield to Fairbanks, Forest Hills to Fort Lee. Many submissions arrived from within New York City’s five boroughs, sent by mail or dropped off at the gallery in person.
Soon, the gallery’s basement was filled with hundreds of envelopes and narrow boxes, waiting to be cataloged. More submissions came in bulk from organizations working with artists with disabilities, Autism, and incarcerated individuals. Every imaginable medium was represented: photography, embroidery, assemblage, drawing, painting and sculpture; film, light, and sound. 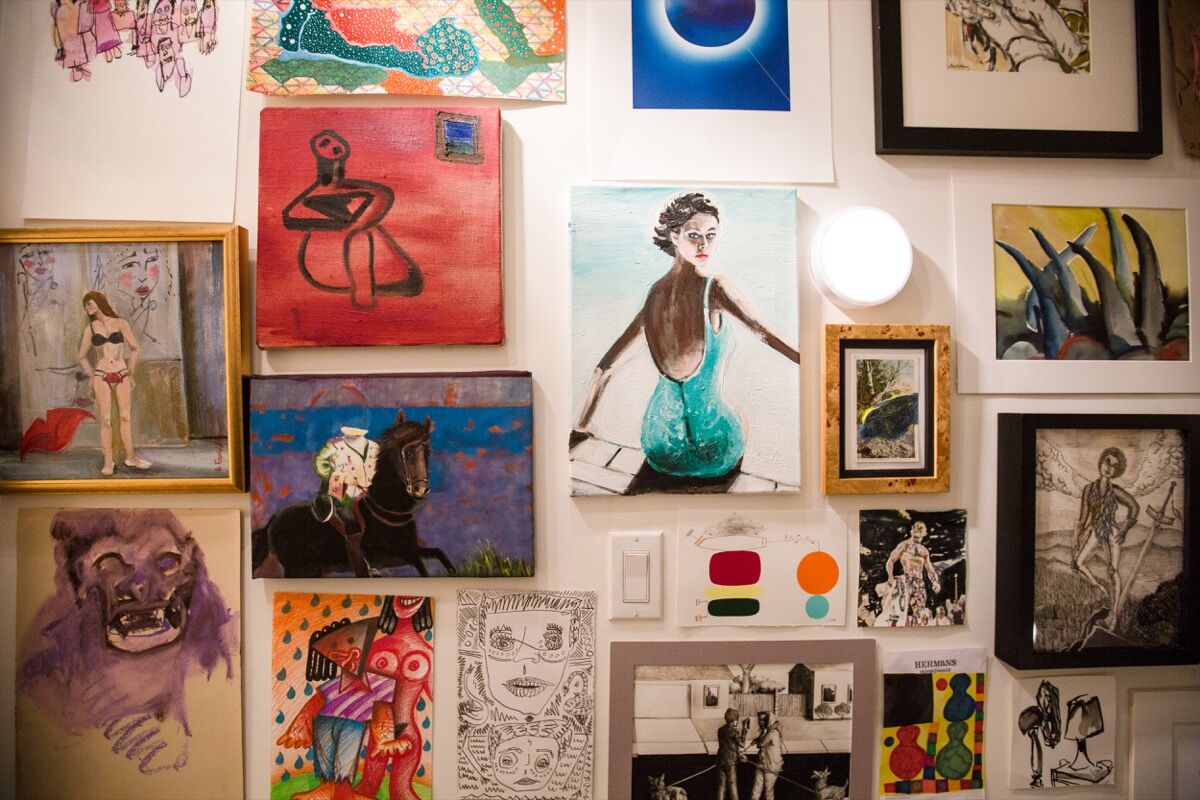 Some artists attached their biographies, business cards, or catalogs of their work. Others included notes that said, “Thanks for creating this!” or “I can’t believe this is my first time showing in a New York gallery!”
One artist submitted a work based on a picture of Edlin and his wife, perhaps imagining it might give him an edge. “Do a picture of the dealer,” Edlin chuckled. “That’s a brownnosing move if I ever heard one!”
The submitters run the gamut, from well-established career artists to undiscovered creators. Art world provocateur
Terence Koh
submitted a piece, as did artists who have had museum or solo gallery shows, like
George Widener
,
Ben Gocker
,
Sara Magenheimer
,
Loren Munk
, and David Schoerner. The youngest participant is 3 1/2 year old Georgi Starbuck Brown from Brooklyn, New York. (You might call her an emerging artist.)
After less than a month, there were 740 works of art stacked in the basement. The huge number of submissions, and the outpouring of enthusiasm that accompanied them, took show’s organizers by surprise, and they had to end the open call early. “We had to stop it. We were like, ‘No more, no more!’” Sterns says. “Just the scale of the response shows how eager they are to have their work shown and grateful to have a place to do it,” Edlin adds. 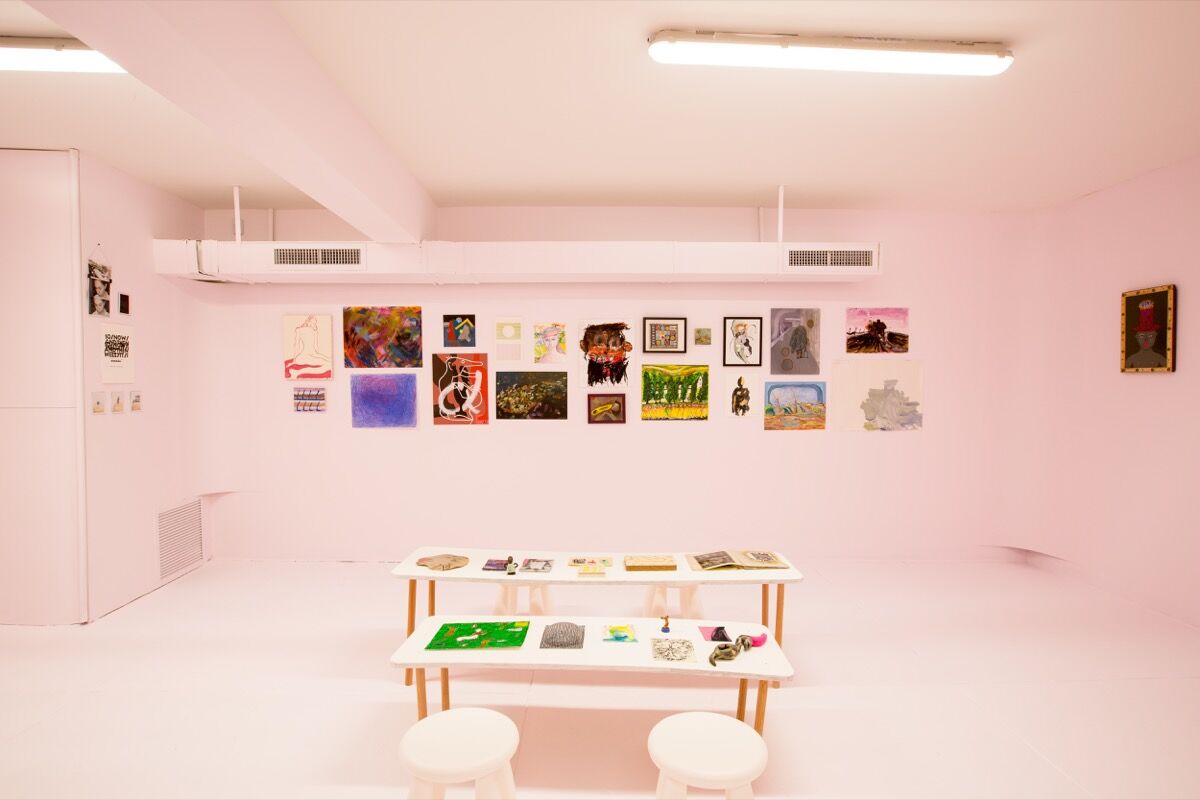 Advertisement
The works will go on view in “Et Tu, Art Brute?” at AEG Underground, the newly opened gallery located beneath Andrew Edlin’s Bowery location, running from November 17th through January 28th.
Since 2001, Edlin has cultivated a roster of primarily
outsider artists
, including
Domenico Zindato
,
John Byam,
and the estates of household names like
Henry Darger
and
Eugene Von Bruenchenhein
. Although the inclusive, open call structure of the new show is unusual, it aligns well with the gallery’s overarching ethos of championing the artists who fall outside the parameters of the art world.
Sterns, too, has spent much of her career exploring similar ideas. “I worked with Phyllis Kind, the doyenne of outsider art, many moons, ago,” she told me. “So the questions of what can art be and who gets to participate, have always been on my mind.” (Sterns began interning at Phyllis Kind Gallery while she was still a student at Rutgers University.)
Kind, a pioneering advocate for outsider artists, was one of the first dealers to include their work within the context of contemporary art. She was the first to promote many artists who are now considered seminal figures of 20th Century outsider art, including Darger,
Martín Ramírez
, and
Adolf Wölfli
.
“I run a non-profit gallery,” Sterns explained, nodding to her work as the curatorial director at Bushwick’s Interstate Projects. “And I’m very much about inclusiveness, not a stratification, in the art world. So when Andrew told me his idea for the show I was like yeah! It’s very punk to be generous like that.” 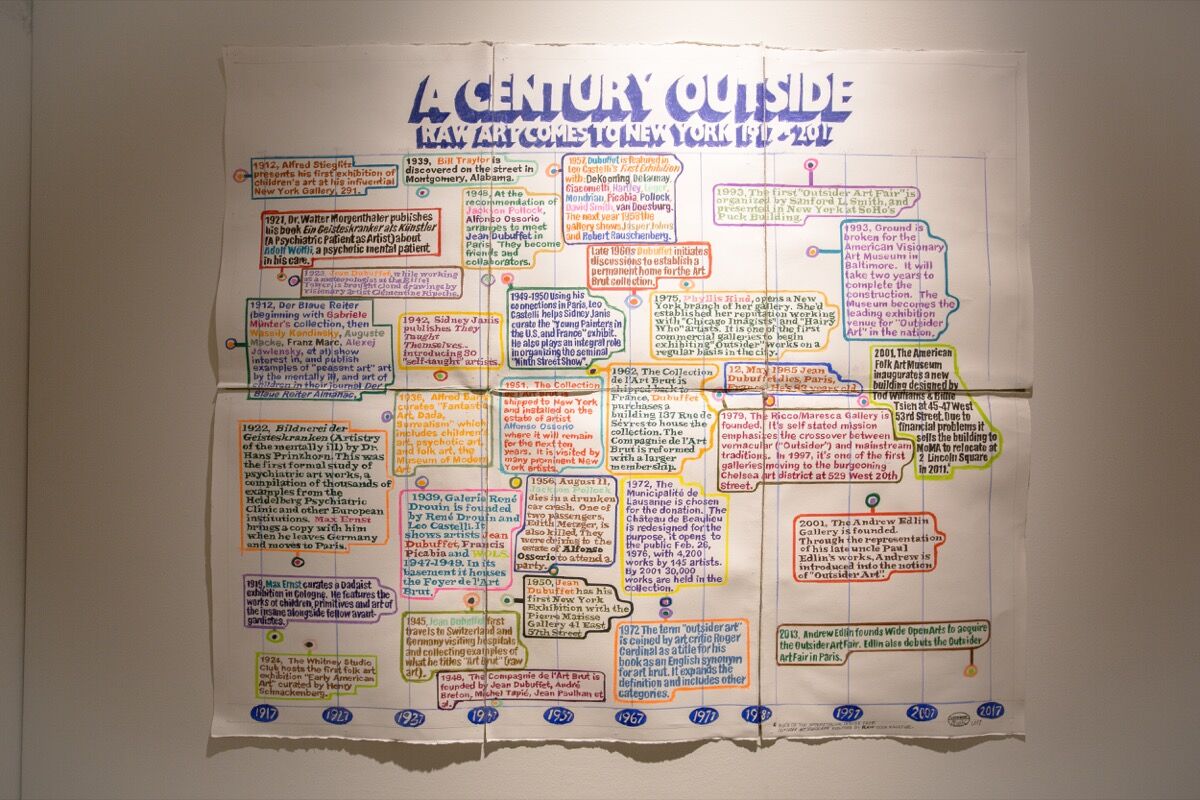 Every work in “Et Tu, Art Brute?” is priced at $200, with profits to be split 50/50 between the artist and gallery—a move that suggests the organizers want to emphasize equality, and also signal that this experiment is a professional endeavor. “I think it was important to accord the people who are participating at least the modicum of respect that we would give any artist upstairs,” Edlin says. “So even though things are modestly priced—and accessible as hell as a result—it’s still professional.” There are no wall labels identifying the artists (potential collectors may ask for the checklist), but eagle-eyed bargain hunters will be able to spot the steals.
Though she’s a curator and gallery veteran, Sterns had never organized anything quite on this scale before. “Fitting 700 pieces in a 25-by-25-by-8 ft space is…just a lot,” she admits, while surveying the basement gallery (which feels about as spacious as the average Manhattan one-bedroom). Photographing, measuring, and cataloging each piece took Sterns and an assistant about 70 hours, all told.
In contrast to the the typical day-to-day work of running a gallery, all the research, vetting, and careful planning, plus the process of mounting this show, seems like an endurance test—curation on steroids. But Sterns takes her stewardship of the work so seriously that the extreme nature of the show doesn’t feel like a gimmick or a reality show challenge.
For starters, she doesn’t want to compromise the integrity of the exhibition experience by cramming the walls with art. “It’s better to be patient,” she says, “so the work is shown most optimally, rather than most efficiently.” Approximately one third of the works submitted will be on view during the opening, with plans to rotate in new works every few weeks.
Upon entering the gallery, it’s immediately obvious that each element, down to the exhibition’s logo (with playful
Dubuffet
-inspired typography), has been carefully considered. The design of the exhibition space was conceived by the artist
Quintessa Matranga
, who altered the room’s corners so that the walls meet in gentle curves rather than right angles, added a fresh coat of pale-pink paint, and finished it off with a row of tulle curtains. Sterns describes the vibe as “soft and eggy, like you’re inside a membrane. I want it to feel inviting and warm, a place that feels special.” The installation of the show feels surprisingly open and airy, with plenty of breathing room for people and art alike. 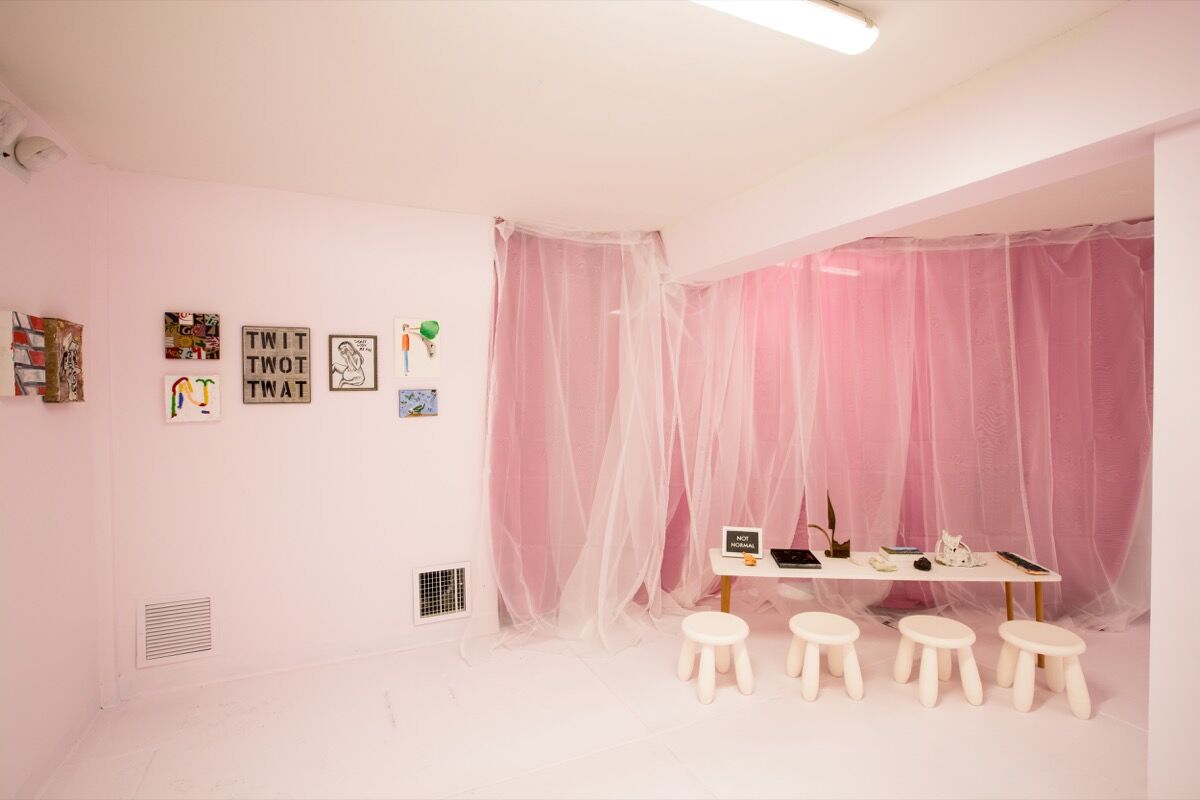 Striking a balance between inclusivity and respect for individual artists seems to be the major challenge of mounting a “we’ll show everything” exhibition. Artist
Jayson Musson
took on this challenge, too, back in 2012, when he curated an open-call show at Family Business (a pocket gallery in Chelsea created by
Maurizio Cattelan
and Massimiliano Gioni). But in contrast to Sterns, he wasn’t initially concerned about creating an inviting and accessible space.
At first, Musson had planned to fill the tiny gallery with as much art as possible, stacking it floor to ceiling and calling the whole thing a critique of the over-saturation of the art world. But as soon as he began meeting the contributing artists, his approach shifted radically. “Meeting the wide range of artists who submitted work, from 12-year-olds to people in their eighties, I realized that I couldn’t be callous with their work,” he tells me, reflecting on the experience several years later.“This was a chance for many of them to show work in probably the most public context they’d known, so I tried to mount as ‘proper’ a show as I could to give their work some shine.”
The resulting show “Itsa Small, Small World,” turned into an an impromptu block party, with revelers filling the street as people waited for a chance to squeeze into the tiny gallery, which was entirely covered—walls, floor, and ceiling—with art. “It was still chaotic and insane,” Musson admitted, “but hey, I tried.”
The common thread that links these two shows, in spite of their distinct curatorial approaches, is the outpouring of interest and excitement that each generated from artists. In both cases, the curators were nearly overwhelmed by the magnitude of the response, which prompts the question: What does this outpouring of interest in open call shows say about accessibility in the art world?
“It says that artists want an audience, and that they feel disenfranchised by an opaque and baroque-ass power structure that tosses hurdles upon hurdles at them,” Musson concluded. “From academia to the gallery, it’s all hurdles.”
The art world is so often circumscribed by exclusivity, cliquishness, and limited access, that the act of giving space on a wall to someone who hasn’t cleared those hurdles seems radical. Or, as Sterns puts it, “It’s subversive to be so open.”
Ariela Gittlen
Related Stories 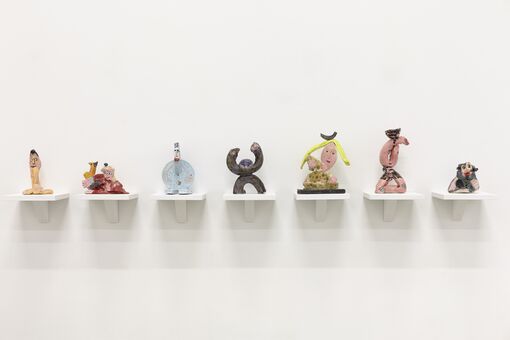