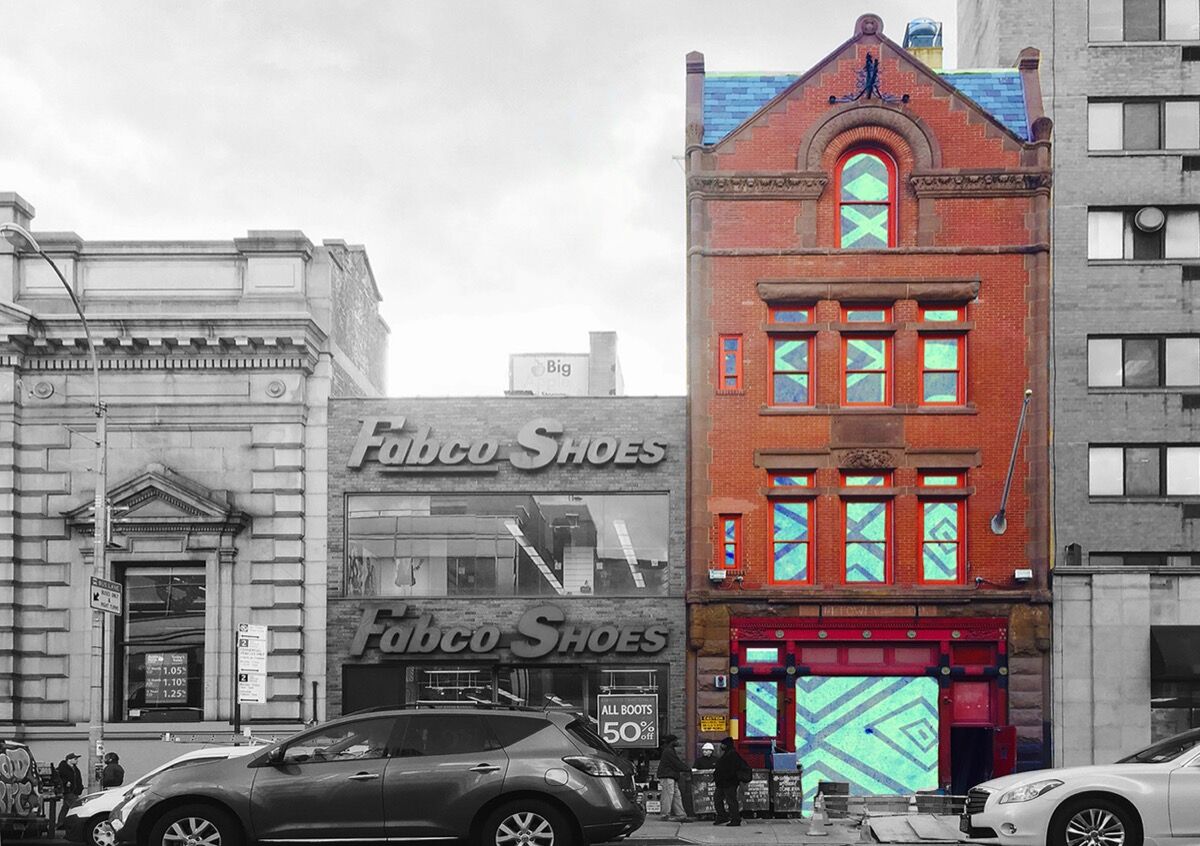 Rendering of the new CCCADI home in Harlem. Image courtesy of CCCADI.

New York has a triumphant new space dedicated to global black culture. Last night, the 40-year-old Caribbean Cultural Center African Diaspora Institute (CCCADI) reopened in a disused firehouse near the borderland between East and West Harlem, a few blocks from Marcus Garvey Park. It adds one more space to the city’s tiny roster of cultural institutions dedicated to communities of color, and joins the neighborhood’s Studio Museum and El Museo del Barrio by putting down roots in a region with a long and rich history of African-American and Latino cultures.
It’s a small and intimate space, but one that represents an enormous achievement and far-reaching implications—and it’s a project that has been some nine years in the making. “We are here, in El Barrio, can you hear me Harlem?” Nyoka Acevedo, a board member, called out to a packed crowd just hours after the institution’s ribbon-cutting, which was attended by New York City’s Commissioner of Cultural Affairs, Tom Finkelpearl, the First Lady of New York City, Chirlane McCray, and numerous other officials who have helped to secure a permanent home for the institution, and to amass $9.3 million (a combination of tax-payer money and individual donations) for its renovation. “Here we stand, in our home, in Harlem, in this landmark building, one of the few institutions of color to have a landmark building in the city.” 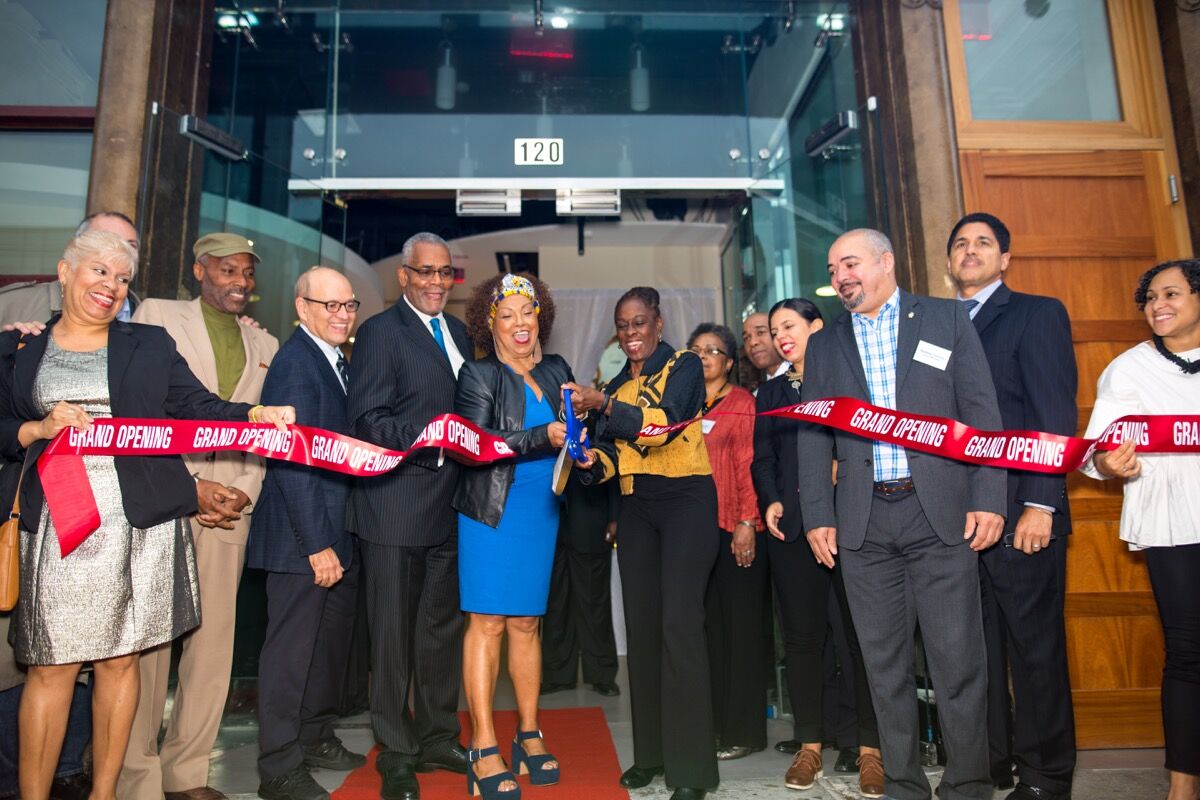 Ribbon-cutting of the new CCCADI home in Harlem. Image by Rex Desrosiers, courtesy of CCCADI.

The significance of the moment was not lost on anyone in the room. The arrival of CCCADI in Harlem marks the end of the institution’s odyssey through three different spaces, beginning in a building in the East 80s in 1976, before moving to 58th and 9th, and now East Harlem. “The process has been a difficult one,” the institution’s firebrand founder and former El Museo director Dr. Marta Moreno-Vega, who is Afro-Puerto Rican, said over the phone a week before the opening. Difficult, she explained, “because having people invest in an idea that addresses the articulation of a vision that is anti-racism, anti-discrimination, and pro-African and African Diaspora cultures, is one that even for our own is not always embraced. The whole notion that you’re building an institution to a vision of liberation is one that is hard to grasp, and we were fortunate to get people who understood and invested in different ways, and now we’re here.”
Since its founding, the institution has been as much a locus for activism, and a meeting ground for people of African descent from around the globe, as it has been a platform for art. Lowery Stokes Sims, a former museum director and longtime advocate for artists of color, who has co-curated the CCCADI’s inaugural show “Home, Memory, and Future,” recalls the institution’s early days, when Dr. Moreno-Vega had just conceived the space. “I met a very global group of people there,” says Sims, “and we’re talking in the ’70s and ’80s before globalization became a widespread notion. It was Southern black people, Caribbean black people, African black people, Latin American black people, who came together for commonalities.”
She remembers a conference Moreno-Vega organized that brought together Yoruba priestesses from Nigeria, Brazil, and Puerto Rico. “While they couldn’t speak each other’s languages,” Sims says, “they could communicate with each other in Yoruba, which is the original language for Santeria.” Back then, despite the Civil Rights movement that had roiled through the 1960s and defined the era, consciousness around systemic racism was only nascent—particularly in the culture sector.
“The art world, as you know, is one of the most racist, discriminatory, and marginalizing experiences because it’s grounded in a Eurocentric vision as opposed to a global vision,” says Dr. Moreno-Vega. “So when we started, people really didn’t understand what we were doing. In time, because of the Black Art Movement, and the Eureka Movement, and the Native American Movement, and all of the movements that branched out of the Civil Rights movement, you begin to get people who are conscious of these movements.”
Today, that increased consciousness has put a spotlight on the rampant inequities of the art world—as well as bringing attention to numerous under-recognized artists of Latino and African descent, such as
Carmen Herrera
and Archibald Motley—but Moreno-Vega stresses the constant labor and vigilance that is necessary to keep moving the dial. “Finding a multigenerational audience is part of our reality, because we need to train the next generation,” she says. “We have to think about the future, and continuity. We have to think about what we’re putting into our kids’ brains, because they have to know who they are.”
The strength of Latino and African-American voices across the culture sector, one imagines, can only benefit from the spirit of diversity and inclusivity that characterizes the CCCADI. “We’re talking about black and Latino solidarity,” Acevedo remarked at the opening, noting that there has historically been tension between the two communities in West and East Harlem, often considered to be divided along 5th Avenue. 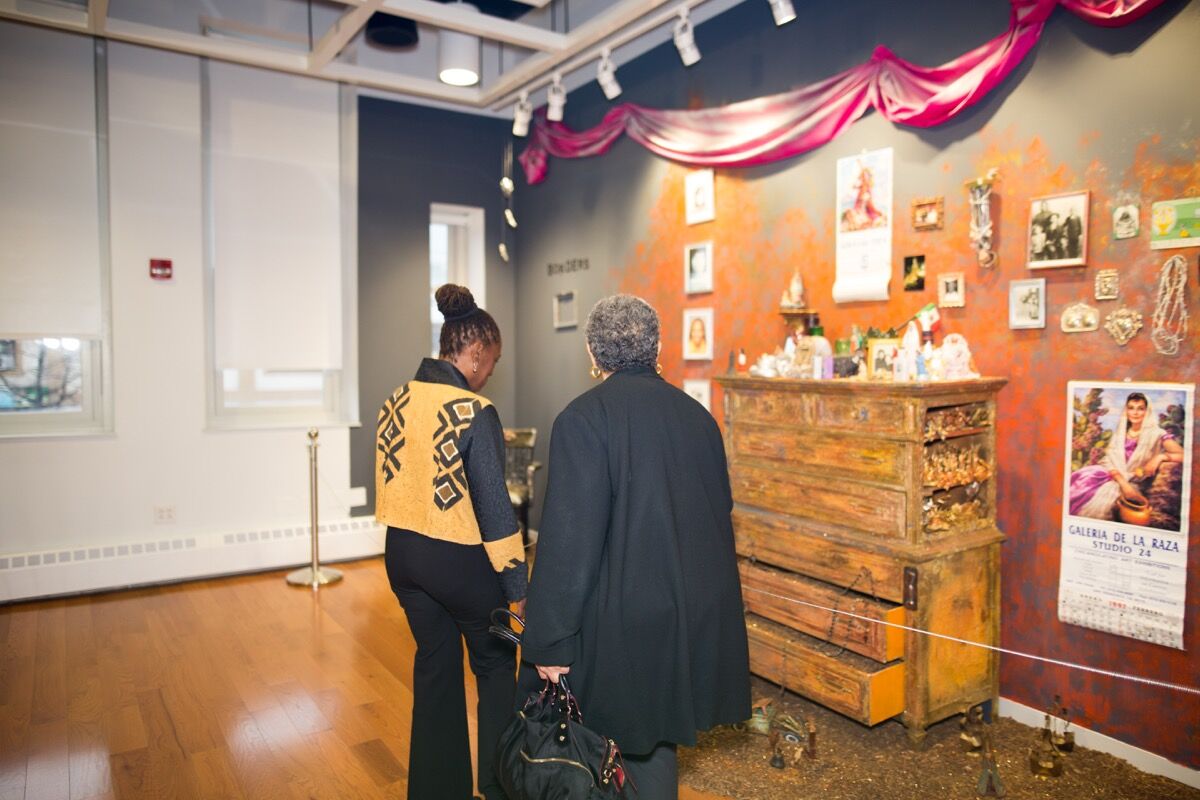 Installation view of work by Amalia Mesa-Bains at the opening of CCCADI. Image by Rex Desrosiers, courtesy of CCCADI.

Advertisement
The great diversity represented by Harlem, and by the African Diaspora more broadly, is on view in the institution’s powerful inaugural exhibition, which explores the idea of what constitutes “home.” One aspect of belonging somewhere is feeling a connection to its history. And so the show opens with iconic photographers of the neighborhood from the 1970s—
Dawoud Bey
’s gorgeous portraits of musicians, shoemakers, barbers, and other individuals around Harlem; the quiet, peaceful images that
Chester Higgins Jr.
took of members of the Black Muslim community at a time when the Black Power Movement had drawn national attention; and Hiram Maristany’s pictures of the Young Lords, the Puerto Rican liberation movement that he served as official photographer to, starting in 1969.
But it’s on the second floor, where the works of six contemporary artists are on view, that the exhibition really sings. It’s dominated by installations that conjure a warm, imaginative atmosphere, including the work of the brilliant Chicana artist Amalia Mesa-Bains, now in her seventies, who has configured the furnishings and tchotchkes of a Mexican household—votive paintings and ornaments, portraits, the skulls and glitter known for Dia de Los Muertos, and a chest of drawers, all of which form an altar set against a wall of mottled, colorful paint that dissipates into a somber grey and hanging letters that spell out B-O-R-D-E-R-S.
Elsewhere, African-American artist
Abigail DeVille
has created a magical shelter from scraps salvaged around Harlem. Visitors can go inside and find walls lined with buckets containing glass bottles, and a flickering light that momentarily catches their glistening surfaces. It calls to mind the subterranean home of Ralph Ellison’s Invisible Man, decorated with lightbulbs. DeVille’s work and that of Adrian Roman, who presents an assemblage exploring the histories and migrations of his two Puerto Rican grandfathers and a panel in which a makeshift boat composed of newspaper undertakes a voyage across an ocean, suggest the psychological underpinnings of belonging. “Home is an idea, rather than physical, tangible things,” Roman told me at the opening. 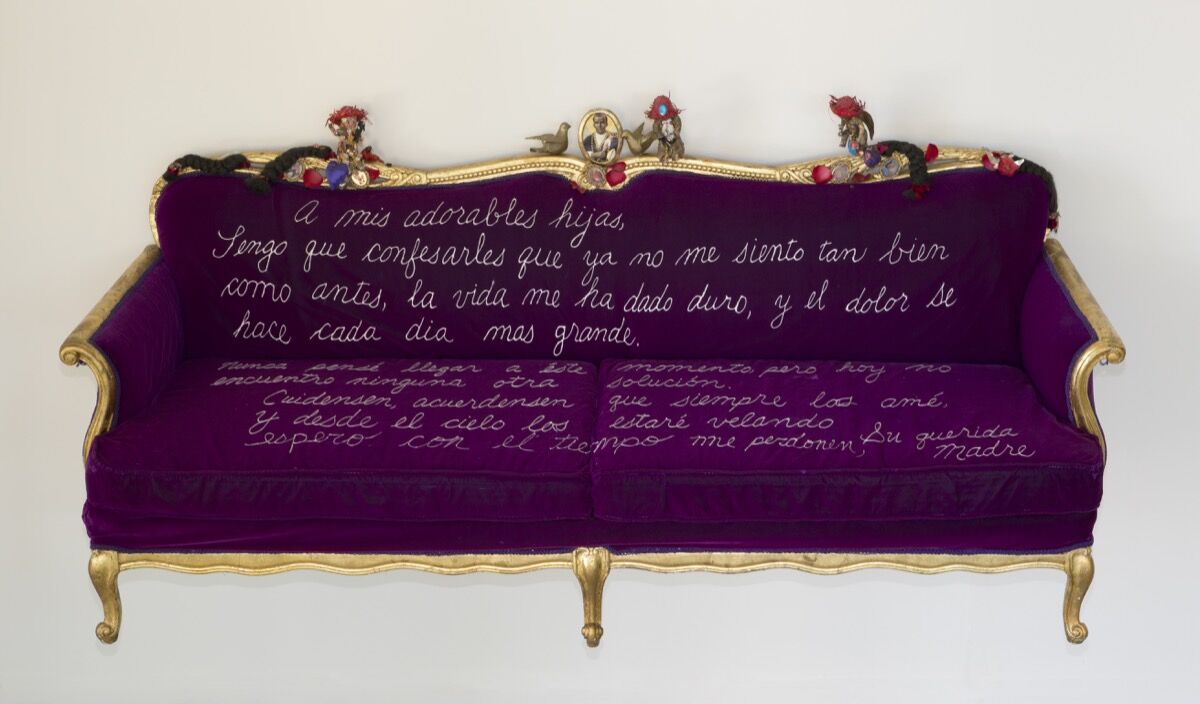 Perhaps the most moving of all the installations, though, is Puerto Rican artist
Pepón Osorio
’s A mis adorables hijas (1990), a purple sofa affixed to a wall, invoking a domestic space. Stitched into its upholstery is a tender goodbye message from a mother to her daughters, bringing into sharp relief the impact that migration and border politics have in dismantling families.
It’s no coincidence that the CCCADI has arrived in Harlem during a period of rapid change across the neighborhood, and the message of Osorio’s work points to the human impact of forced migration—whether between countries or neighborhoods. “Gentrification is on steroids, in El Barrio, in Harlem, and globally,” Dr. Moreno-Vega says. “Wherever our communities are, generally, were areas where people didn’t want to be. And now all of our historic communities tend to be on waterfronts. How do we sustain home when people are buying up our historic land, be it the Caribbean, Africa, or here?”
Now that its future is certain, the CCCADI is well-positioned to both preserve the history of Harlem and continue galvanizing communities around current issues. “This institution,” Dr. Moreno-Vega said at the opening, “is not an art institution; it’s a social justice institution. Art is a vehicle, and we use it to talk about issues. We’re talking about the dislocation of our people throughout history.”
Seen together, the work of these artists speaks clearly and forcefully about displacement, but also about the resilient power of culture to withstand change—and sometimes even to transform lives.
Tess Thackara
Related Stories 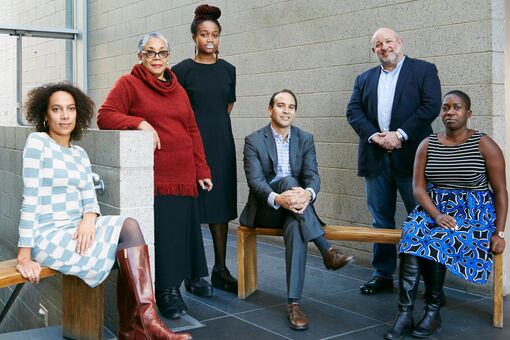 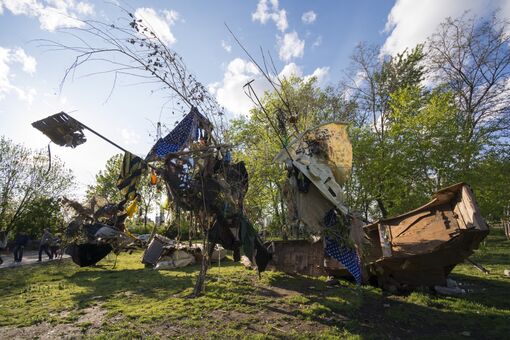