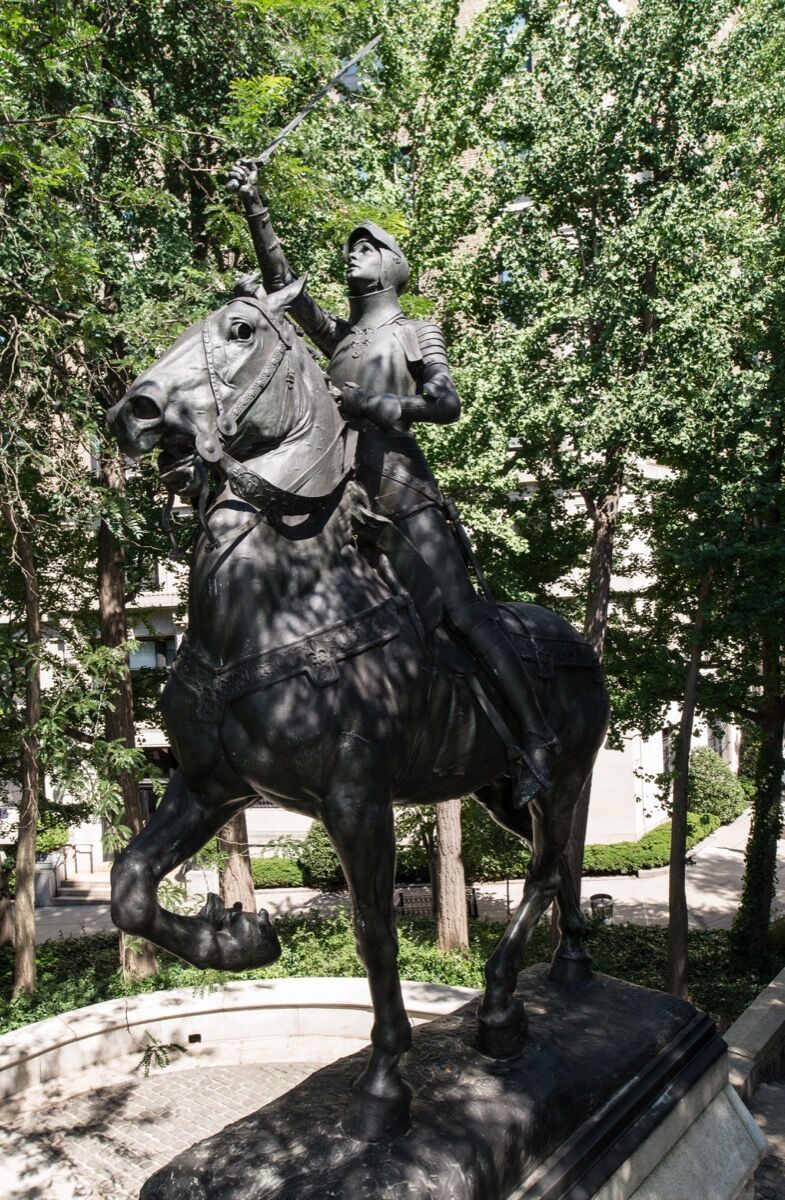 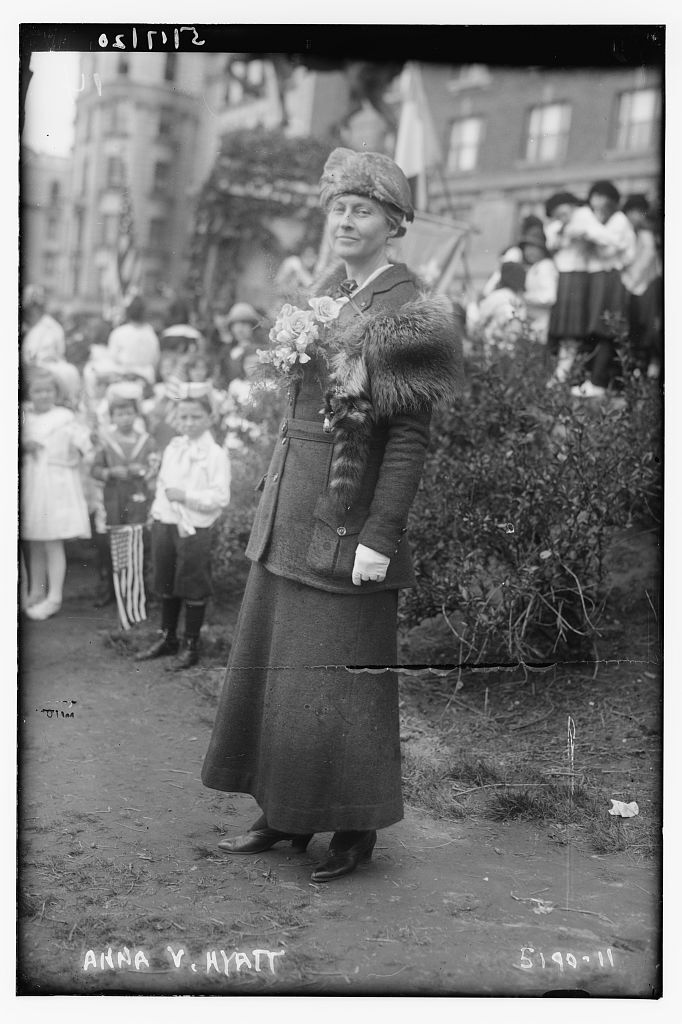 Anna Vaughn Hyatt Huntington at a ceremony honoring the canonization of Joan of Arc, New York, NY, May 15, 1920. Courtesy of the Library of Congress.

This past June, New York City called upon its citizens to put forth suggestions for women who should be honored with new public monuments. “More Women Deserve Statues in New York,” read a New York Times headline, followed by a list of the paper’s own top 10 contenders: a heady mix of activists, writers, and cultural firebrands. The contest came at a moment of national reckoning with our public monuments—questions of who they honor, and why—as statues of figures entangled in the more unsavory moments of American history have been torn down, and many others vandalized.
These debates have spurred Americans to examine the histories and personal accomplishments that go unrecognized in our shared spaces. The number of public monuments featuring historical women in New York, for instance, can be counted on one hand. Therefore, it seems an apt moment to rediscover the city’s first monument made by a woman—and the first to feature a real woman as its subject—unveiled over 100 years ago to phenomenal fanfare. That would be
Anna Vaughn Hyatt Huntington
’s bronze statue of Joan of Arc, an icon of female power that has resided for the past century on a quiet, tree-lined block on Manhattan’s Upper West Side, shrouded in a leafy enclave on Riverside Drive.
Astride her massive bronze horse and clad in a full suit of medieval armor, Joan of Arc spears her sword into the sky, poised to lead her long-gone troops into battle. This statue may, at first, seem to adhere to the traditional conventions of heroic sculpture, yet every aspect of its creation and display belongs to an extraordinary story—one, like so many others, that has been largely erased from collective memory. This Joan of Arc served as a kind of alter ego for its creator, Hyatt Huntington: an imposing, nearly 6-foot-tall socialite who was among the most prominent sculptors of her day (and one of the few commercially successful women artists at the time). 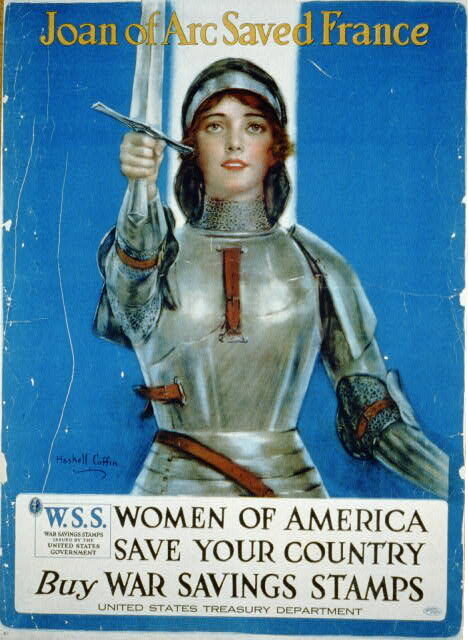 Haskell Coffin, Joan of Arc saved France—Women of America, save your country—Buy War Savings Stamps, 1918. Courtesy of the Library of Congress. Poster depicting an issue of the periodical, The Suffragette, ca. 1912-15. Photo via Wikimedia Commons.

Hyatt Huntington moved to New York from Boston in 1902, intent on pursuing her art career. She was immersed in making lifelike, emotionally charged animal sculptures depicting cranes, polar bears, tigers, and monkeys. (The newly opened Bronx Zoo provided inspiration and live models for the artist, whose pouncing stone jaguar sculptures remain on view there.)
The artist found acclaim in the city’s booming statuette market. Local foundries rapidly sold editions of her smaller works, and by 1912, Hyatt Huntington counted herself among the highest-paid professional women in the United States. She received prestigious awards, as well as recognition from institutions like the Metropolitan Museum of Art and the National Academy, which collected her works. Thriving and financially independent, Hyatt Huntington waited to marry until 1923—at the age of 47—wedding American philanthropist Archer Milton Huntington.
Although she had a prosperous career in New York, it wasn’t enough for her. At the beginning of the century, Paris retained a firm grip as the center of the art world. Determined to make her mark upon the Parisian salons, Hyatt Huntington made several long trips to Paris between 1906 and 1910, where she continued with her animal sculptures. Yet her ambitions grew. She soon began a search for the perfect war horse to use as a model for an equestrian statue, a form that had been considered the height of sculpture since ancient Rome.
Hyatt Huntington searched far and wide for the right horse to inspire her sculpture, which was eventually exhibited at the 1910 Salon in Paris. But the truly radical touch was who she placed atop that steed: Joan of Arc, clad in armor and holding her sword aloft. Hyatt Huntington had dared to depict a sacred French subject.
Sexism quickly reared its head. The jury doubted whether Hyatt Huntington could have made the sculpture herself (some rumors go that she locked herself in the studio so no one could claim a man had come in to help her), but the work was awarded an honorable mention anyway. More fortuitously, an executive from
Tiffany & Co
, the New York–based luxury jewelry and design firm, took notice of Hyatt Huntington’s sculpture. He also happened to head New York’s Joan of Arc Statue Committee, a diplomatic outfit that had formed the year before with the goal of fostering friendship between the U.S. and France. Upon her return to America, Hyatt Huntington made several small models of Joan on her horse, which were exhibited by the committee, before creating the final, monumental version on Riverside Drive. 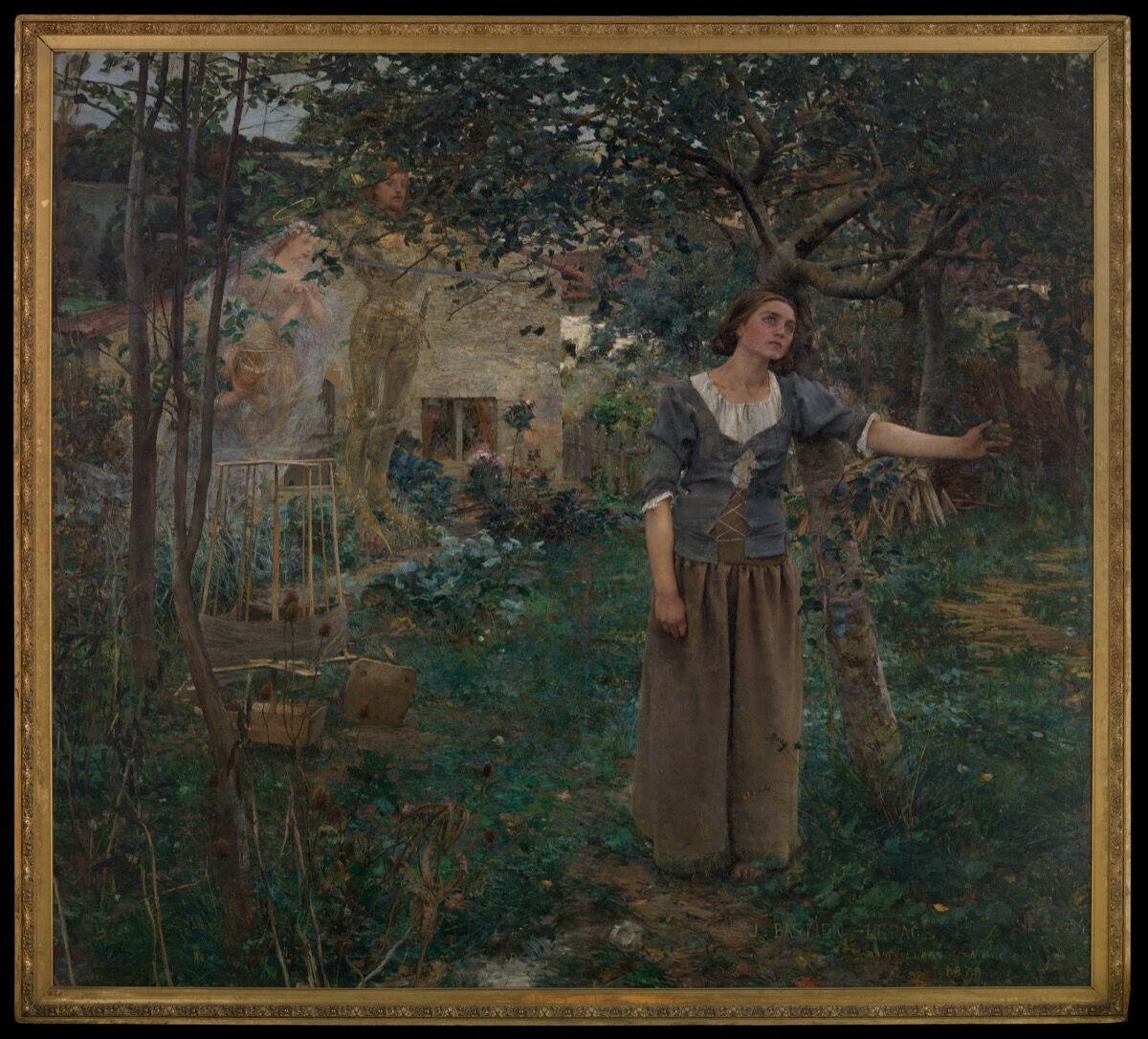 Jules Bastien-Lepage, Joan of Arc, 1879. Courtesy of The Metropolitan Museum of Art.

Advertisement
On December 6, 1915, prior to the U.S. entering World War I, thousands lined the streets to catch the unveiling of Hyatt Huntington’s Joan. Prominent guests in attendance included the French ambassador, who gave a speech, and Mina Miller Edison, wife of Thomas Edison and a high-ranking member of the Daughters of the American Revolution. The turnout for such an event seems remarkable, considering the audacity of Hyatt Huntington’s artistic ambitions and the forthright military aspirations of her subject. Not only was this the first public monument in New York by a woman, it was the first-ever monument in the city to honor a real woman, rather than an allegorical figure.
Hyatt Huntington had transformed a historical woman commonly depicted as a humble and pious teenage servant of God into the very image of martial valor. Her Joan of Arc reflects the era’s changing social norms, and fits in perfectly with the increasingly liberated image of Joan that had been gaining popularity at the turn of the century, as women struggled for their rights.
Earlier depictions of Joan, such as
Jules Bastien-Lepage
’s Joan of Arc painting from 1879—in the Met’s collection by the time Hyatt Huntington arrived in the city—play on her meek, saintly nature. Rarely showing the heroine in battle gear, they seem to skirt the issue of her military genius. A plate from Louis Maurice Boutet de Monvel’s popular “Joan of Arc” illustration series, printed in full color on the front page of the December 6, 1914, edition of the New York Times, shows Joan in armor on her horse, but her hands are bowed in prayer. Instead of a battle scene, friars slowly lead her to Orleans (where, the viewer must know, she will, out of the frame, win a decisive victory).
Meanwhile, suffragettes and women activists called upon Joan as a patron saint, featuring her in rallying posters and magazines. During a 1911 demonstration for women’s right to vote, Marjorie Annan Bryce even dressed up as Joan, riding down the street on a white horse. It could not have been a coincidence that the Times featured the unveiling of Hyatt Huntington’s monument beside an article about delegates of the Congressional Union for Women’s Suffrage, some on horseback; some marching their way to the White House to propose an amendment to the Constitution.
Additionally, during the war, U.S. bonds to spur female participation in war efforts featured an armored Joan, sword raised to the sky, alongside slogans like “Joan of Arc Saved France: Women of America, Save Your Country—Buy War Savings Stamps.”
Hyatt Huntington herself identified with the heroine. In February 1917, she impersonated Joan of Arc at the Fête des Fous, a medieval-themed pageant organized by the Architectural League of New York for the most affluent members of New York society, including Gertrude Vanderbilt Whitney. The Times reported in its February 27, 1917, edition that as Hyatt Huntington—clad in full armor—rode into the party on a white horse, “a big American flag was unfurled at the back of the French heroine and saint and as the lights were turned up the notes of the ‘Star-Spangled Banner’ were sounded and the entire audience, standing, sang the national anthem.” Issue of The New York Times featuring a plate from Louis Maurice Boutet de Monvel’s Joan of Arc series, c. 1907–1909, from December 6, 1914. Courtesy of the Library of Congress. 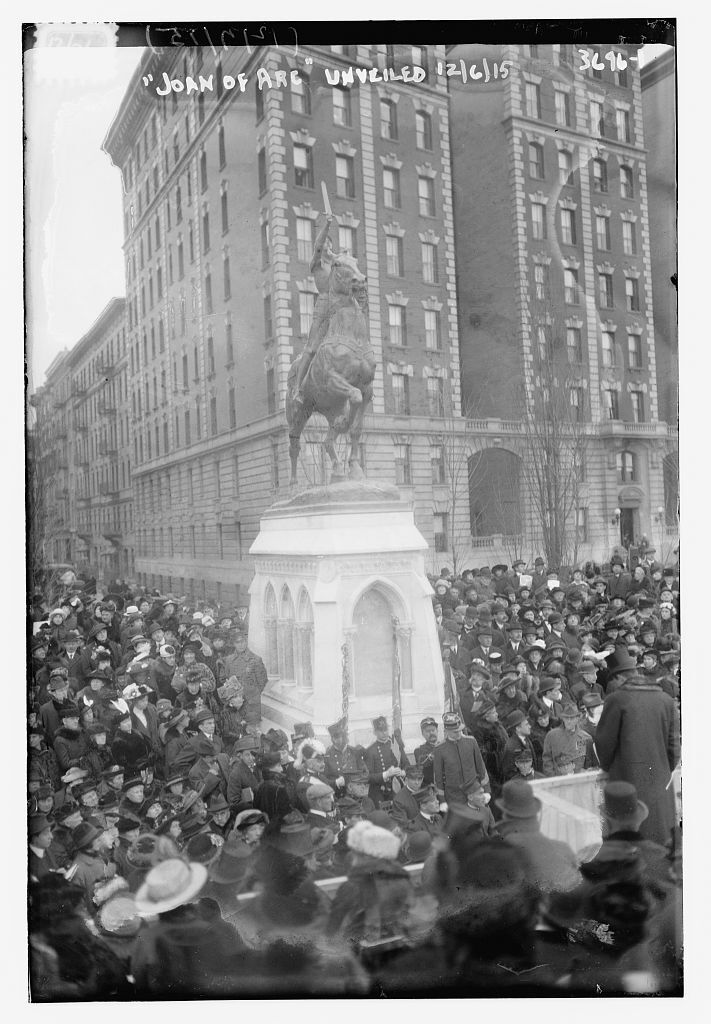 Joan was made a saint by the Catholic Church five years after the sculpture’s unveiling on Riverside Drive, almost exactly 500 years after her death. Again, in 1920, massive public ceremonies were held around the sculpture. In no small part due to Hyatt Huntington, the heroine had been reborn from a figure of virtuous obedience to one of action and emancipation.
The exhibition “Goddess, Heroine, Beast: Anna Hyatt Huntington’s New York Sculpture, 1902–1936,” staged at Columbia University’s Wallach Art Gallery in 2014, offered a much-needed reassessment of the sculptor’s work, and her contribution to New York City. (I was among the mix of undergraduate and graduate students, led by Barnard and Columbia art history department chair Anne Higonnet, who researched and curated the show.) As we discovered the breadth of Hyatt Huntington’s accomplishments, many hidden in plain sight around New York (her works were collected by almost all of the city’s major cultural institutions, and are on display in public locations from the Bronx Zoo and Central Park to the Cathedral of Saint John the Divine), we returned, again and again, to the question of why she, and her statue of Joan, had been so largely forgotten by history.
Hyatt Huntington was an artist unusual in every way: in looks, antics, independence, ambition, and success. Peers like
Augustus Saint-Gaudens
have remained in the canon, while Hyatt Huntington’s star has faded. The patriotic classicism of Beaux-Arts New York withered after the war, and realism fell out of style as the avant-gardists ascended.
But the other truth of the matter is that her legacy was not looked after, as happens all too frequently with women, no matter how affluent and successful. Over the years, encroaching tree branches nearly overtook Joan, hiding her from public view. But a trip to the usually sleepy Upper West Side offers an invigorating reminder of the early artistic achievements of strong women; while not always well-known today, they hold fixed places in history.
Julia Fiore
Related Stories 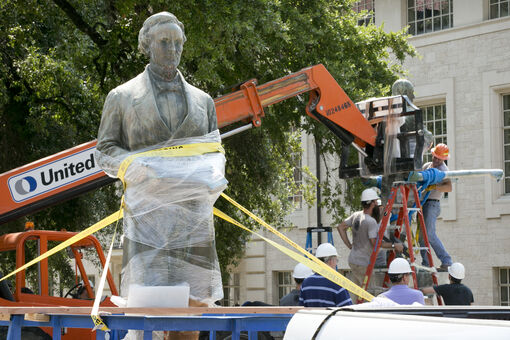