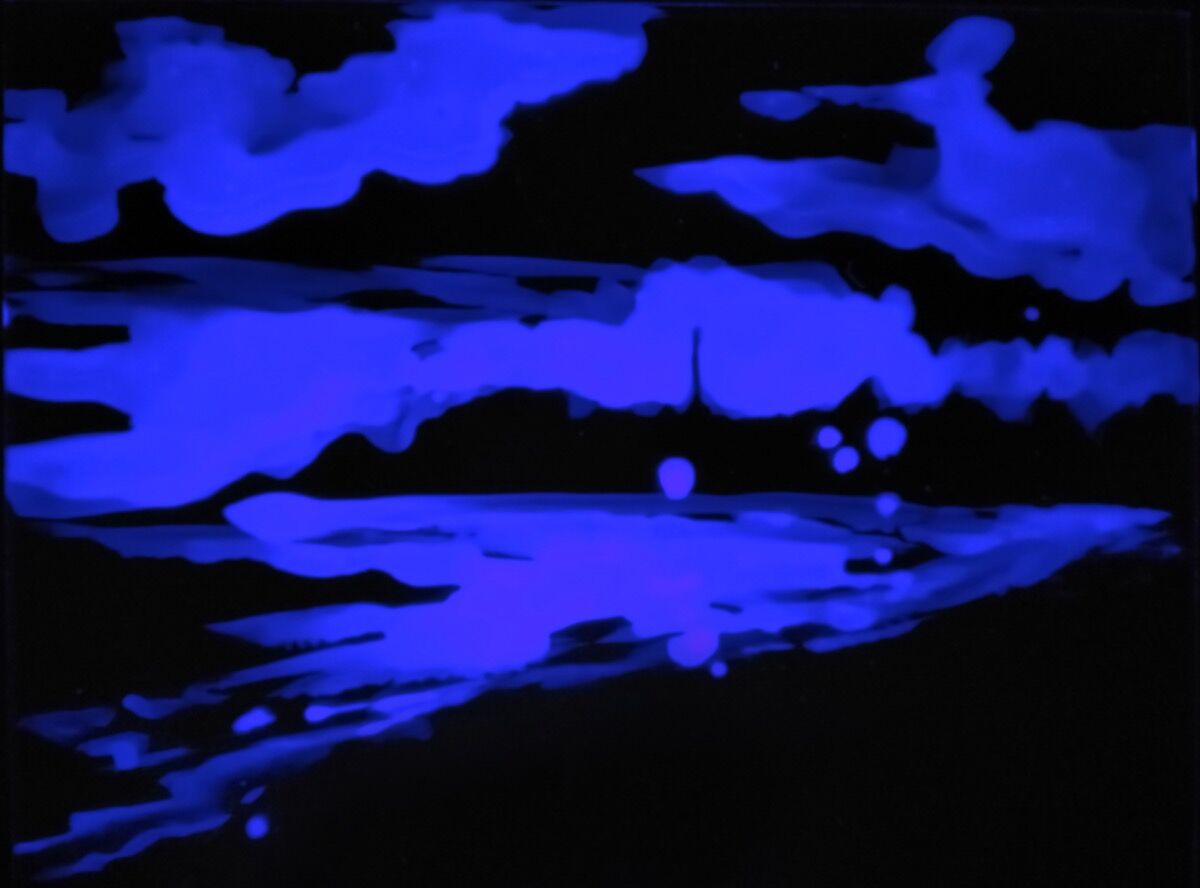 If you google “Quantum Blue,” the top results, as of this writing, will all pertain to a 341-foot-long megayacht of that name owned by Russian billionaire Sergey Galitskiy. But that may soon change. In late August, scientists at Lawrence Berkeley National Laboratory in northern California, working with artist Olga Alexopoulou and color researcher Maria Chatzidakis, made strides towards developing a new, high-tech pigment dubbed “Quantum Blue.”
The new color uses nanotechnology to achieve an exceptionally pure hue of blue that is best seen under ultraviolet (UV) light, which gives it an otherworldly, radioactive glow. (Without UV lighting, it has an unremarkable off-white appearance.) The key components of the futuristic blue are quantum dots: tiny semiconductor particles usually measuring no more than one millionth of an inch in size. Quantum dots convert light into color with exceptional speed and clarity, which has already made them popular with electronics manufacturers working on the next generation of ultra-high-definition screens. When she learned about quantum dots, Alexopoulou—whose own work involves a lot of blues, especially the historical Prussian blue—wondered whether the nanoscopic technology could be turned into a pigment for artists.
“Blue has a wonderful paradox about it, which is that it’s the color that, statistically, most people across many cultures choose as their favorite, even though it’s actually the most difficult color for the human eye to see,” she said. “After working with blue for so many years, it felt like a natural progression to want to create something myself.”
Though Quantum Blue won’t be hitting art supply store shelves anytime soon, the hue’s gallery debut has already been set. In March, at UltraSuperNew Gallery in Tokyo, Alexopoulou will show a small painting she made with the new color—a near-abstract rendering of a beach at twilight—as well as a sample of the pigment itself. The exhibition will mark the culmination of a complex international collaboration, which Alexopoulou coordinated from Istanbul while communicating with Chatzidakis in Athens and the scientists in northern California, primarily via Skype. 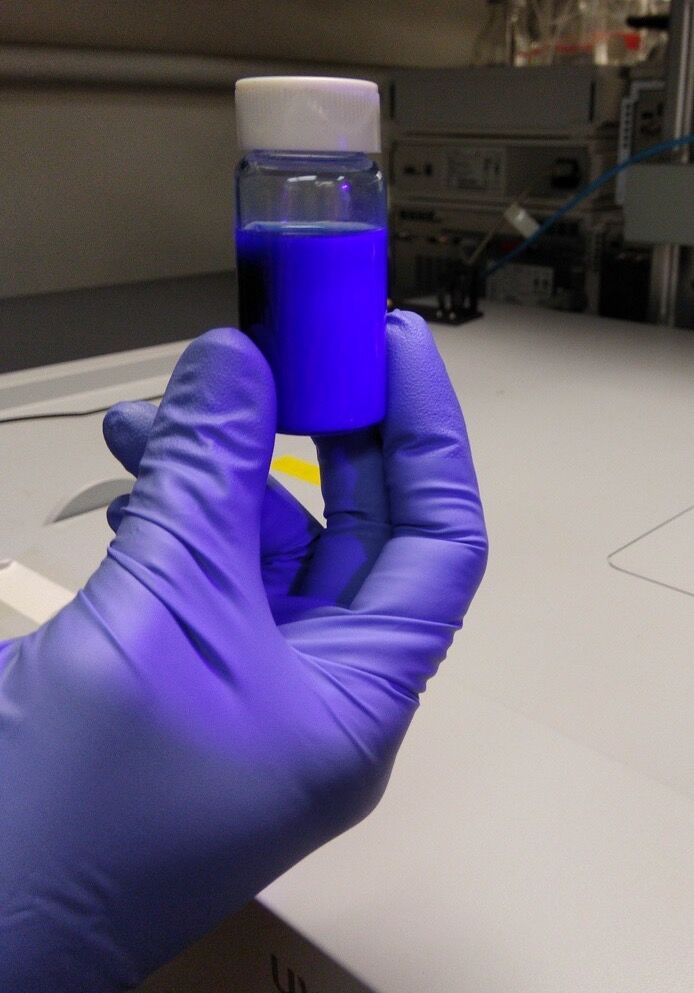 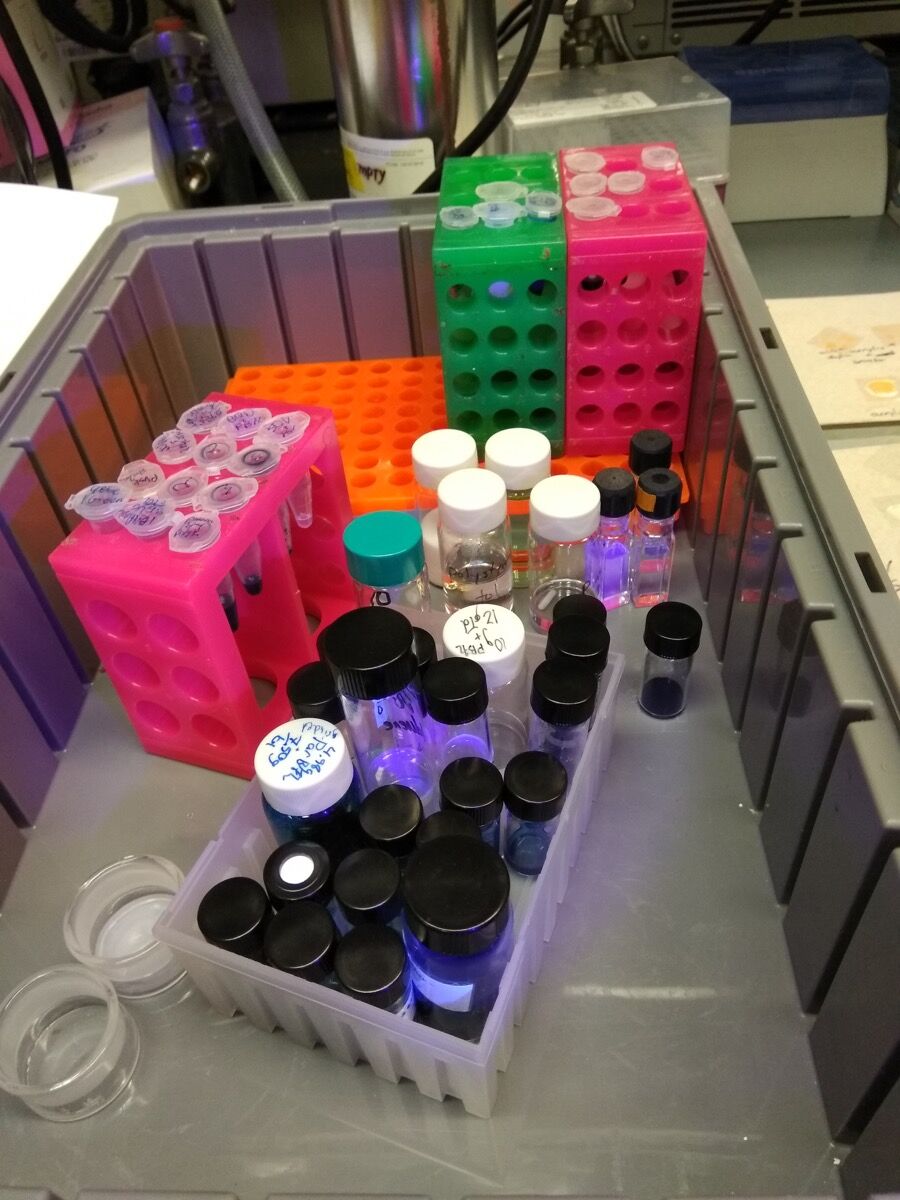 For Alexopoulou, this collaborative and decentralized process was one of the project’s greatest strengths. “This was actually one of the best things about the whole process,” she said. “We had different perspectives, and everyone was discovering new things from each other.”
Though Quantum Blue is hardly the first paint to have been developed through a partnership between artists and scientists—
Yves Klein
and Parisian paint maker Edouard Adam developed International Klein Blue together, patenting it in 1960—entirely new blue pigments are very rare. In fact, when Oregon State University scientist Mas Subramanian accidentally stumbled upon a new blue pigment in 2009, it was the first to have been discovered in 200 years. Though officially named “YInMn Blue” after its chemical formula, it inspired a new hue of Crayola crayon, whose crowdsourced name, “Bluetiful,” was immediately met with shade. Other commercial applications, like a line of acrylic paints for artists, have marked YInMn Blue’s entry into the $30 billion pigment industry and made Subramanian a superstar in the field of pigment research. Quantum Blue could be the next new color to make a splash in fine art and beyond.
“I think that the biggest use of something like Quantum Blue is in fine arts, but I would not rule out using quantum dots as pigments in things like jewelry or watches,” said Joseph Swabeck, who, with fellow University of California–Berkeley chemistry Ph.D. student Arunima Balan, handled the lab work for creating the new blue. “The big limitation is that you need to illuminate the pigment for it to really shine, so incorporating lighting into those pieces could be hard.”
Another challenge is how to turn nanoscopic, semiconducting crystals into a usable paint. Because “quantum dots are produced for different applications than painting,” Chatzidakis explained, “we had to test and then decide what materials to add in the mixture that eventually led to the production of a painting material.” 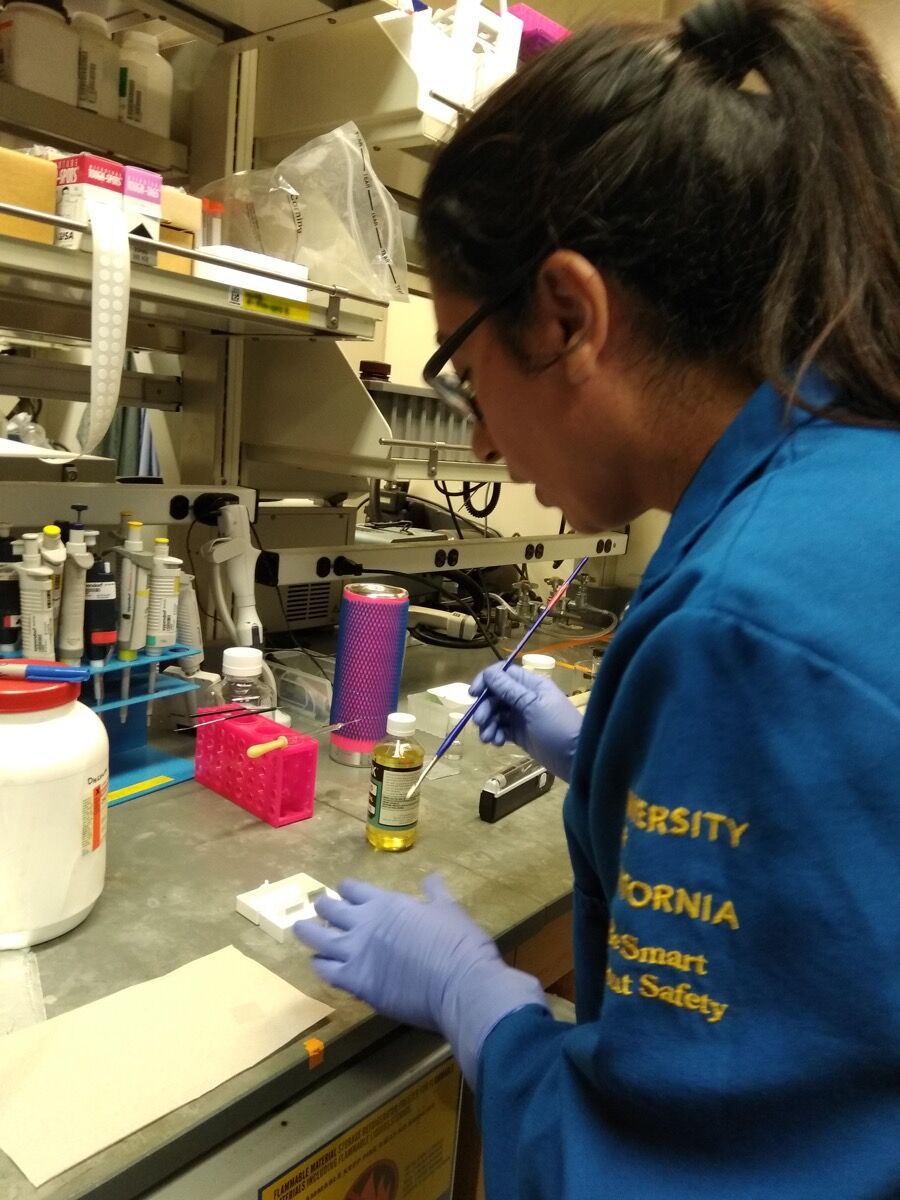 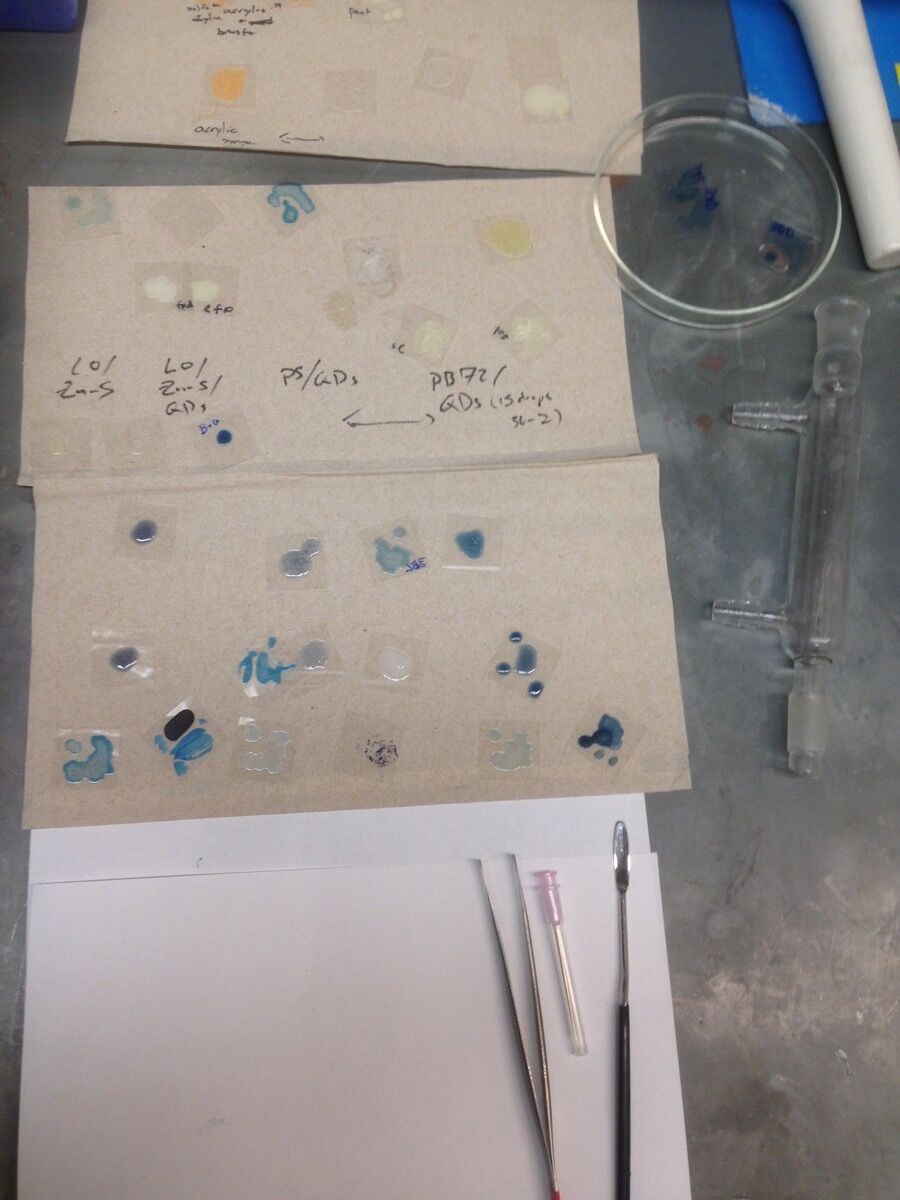 Advertisement
Based on last month’s tests and breakthroughs, Quantum Blue may soon be ready for more widespread use beyond the subterranean Berkeley lab where it currently resides. Alexopoulou told the Huffington Post’s Priscilla Frank that she is in the early stages of patenting Quantum Blue and contacting paint manufacturers about possible large-scale production. But the patenting process, like nanoscience, is delicate.
“For something like Quantum Blue, which presumably involves a complicated process, it may be necessary to disclose the process by which it is made to any manufacturers or advertisers who need to recreate the color, so it would make sense to patent it before those disclosures occur,” said Michael Bernet, an attorney at Brutzkus Gubner who specializes in intellectual property and wrote recently about the challenges of claiming ownership of a color for IPWatchdog. “In order to maximize the benefit (i.e. duration) of a patent, it may make sense to keep it a secret and hold off on obtaining the patent until commercial applications are developed, but of course you run the risk that the secret gets out during that time and then you cannot patent it later or prevent others from making or using it.”
As scientifically and logistically complex as the process of creating Quantum Blue may have been, it remains very much a 21st-century version of a millennia-old practice involving both scientific and aesthetic sensibilities.
“Even though Quantum Blue seems to be far from traditional paint-making processes, it actually continues what has always been the painting technology: a combination of science and art,” Chatzidakis said, likening the new color to the first artificial blue pigment, Egyptian blue. That pigment exists in several varieties, which ancient Egyptians created using methods that ranged from crushing lapis lazuli to heating a mixture of ground quartz sand, copper, and natron. The earliest known uses of Egyptian blue date back to the 3rd millennium B.C.E.
Now, in the 3rd millennium C.E., Quantum Blue—with its nanoscopic quantum dots and requisite UV lighting—could set the tone for the future of blue. In time, it could even become more valuable than the megayacht with which it shares a name.
Benjamin Sutton is Artsy’s Lead Editor, Art Market and News.
Related Stories