Casey Lesser
Nov 11, 2016 5:31pm
When the New England Patriots added Martellus Bennett to their squad in March, not only did they snag a key asset for their offense, they also gained a “Creative Director of Awesomeness.” That title, self-given by the six-foot-six, 275-pound tight end, only begins to describe Bennett’s life outside of football. Now in his ninth season in the NFL—previously playing for the Dallas Cowboys, New York Giants, and Chicago Bears—Bennett’s drive for excellence on the field is matched by his passion for creativity.
When he’s not helping to lead the perennial Super Bowl-favorite Patriots alongside teammates Rob Gronkowski—with whom he forms the “two-headed tight-end monster”—and future Hall of Fame quarterback Tom Brady, Bennett can be found voraciously filling notebooks with drawings and stories, or playing with his two-year-old daughter Jett, while dressed as a dinosaur or a stormtrooper. He could be directing a photo shoot with artist friends in his Chicago home, or brainstorming with a team of illustrators to turn his wild ideas into children’s books and animated films. 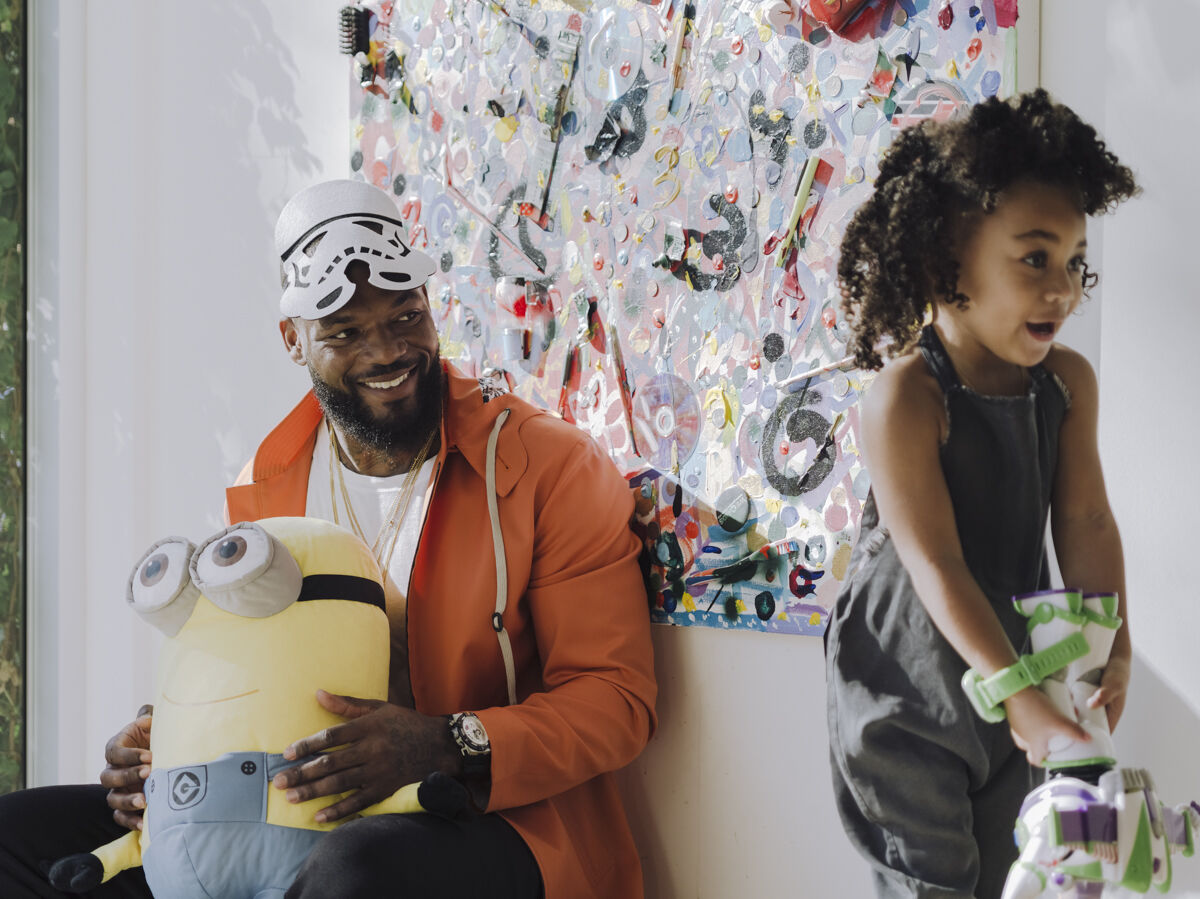 Portrait of Martellus Bennett and his daughter Jett in their Chicago home by Whitten Sabbatini for Artsy.

Advertisement
“If you don’t like the world that you live in, create your own,” Bennett tells me over the phone during his bye week in Chicago, where he lives during the offseason with Jett and his wife Siggi. “I decided to take that literally and I’ve created my own worlds ever since.” In 2014, inspired by the birth of his daughter and the lack of people of color in children’s books, he established his own creative firm, The Imagination Agency. “I started reading all different children’s books and realized there were not many characters that looked like her or that she could relate to,” Bennett recalls. “So I decided to start making my own characters for her.” Initially, when he brought his ideas to publishers, he was asked to shift his narratives to focus on football. A strong believer in every person’s fundamental rights to pursue any number of dreams, he decided to go out on his own.
Bennett, who this week published a heartfelt letter on Instagram to his daughter in response to the unfavorable election of Donald Trump, believes firmly that the future lies wholly with children. The Imagination Agency publishes children’s books, develops apps and interactive games, and produces animated videos—all with the mission to inspire imagination in children. Bennett works as creative director to a team of artists and designers. “I always wanted to tell stories and make wonderful worlds for kids,” he explains. “The best way to contribute to a better future is contributing to kids.” This June, the agency published their first children’s book, the first in a series called “Hey A.J.!” which features a protagonist inspired by Jett. “She’s my Mickey Mouse,” he says of his daughter. “I tell my family’s stories through art.”
The 29-year-old NFL player has long been an avid storyteller. When he was a child, Bennett explains, creative writing was one of his first loves. “One of my punishments when I got in trouble at school or did something bad was to write stories for my mom, so I was kind of groomed to be a writer,” he says. While he excelled athletically from a young age, and looked to sports heroes like Michael Jordan and Randy Moss, at the same time the young creative idolized storytellers like Tim Burton, Dr. Seuss, and Walt Disney CEO Bob Iger.
Bennett has carried this balance between sports and the arts into adulthood, and his creative flair is abundantly clear upon entering his home in the Chicago suburb of Long Grove. The sprawling space explodes with his whimsical spirit (he personally designed most of the interiors, he tells me) from polka-dotted walls and giant Hello Kitty figurines, to kid-sized
Keith Haring
chairs and his own original art, plus his art collection and some 2,500 children’s books. While in the past his home was filled primarily with artwork he’d painted himself, today Bennett is building a collection of work by artists he’s come to know well. 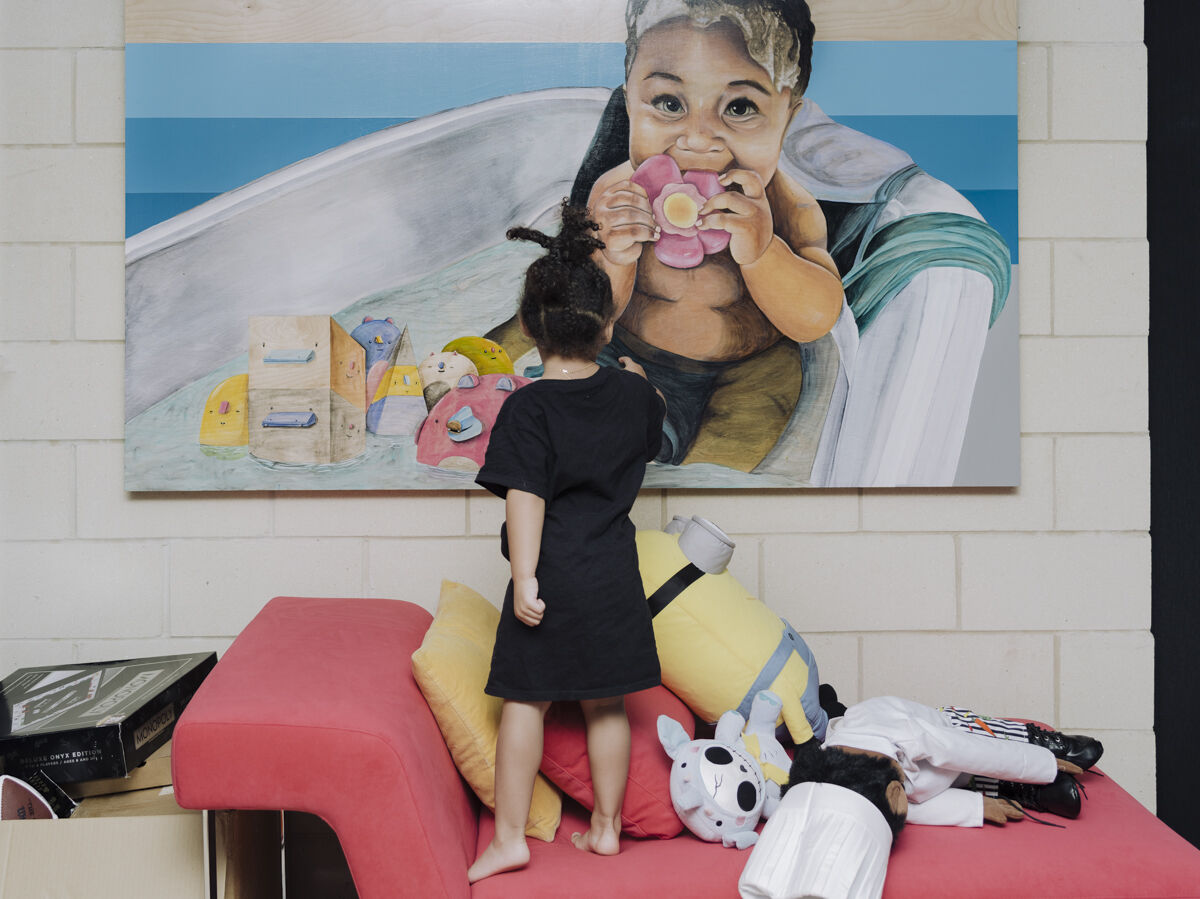 Portrait of Martellus Bennett’s daughter Jett in their Chicago home by Whitten Sabbatini for Artsy.

“These artists know me, they know my family, so if I ask them to make something they make it so that it fits into my world,” Bennett says. He chooses artists who share his playful vision, and often works with them to commission custom pieces for his home, including portraits of his wife and daughter. “I don’t have any art from strangers, really, except for a Dr. Seuss limited-edition print,” he adds. The collection spans giant wood popsicles by the Sour Grapes collective, paintings of figures wrapped like mummies by Blue the Great, and a portrait of a baby Jett in the bathtub by Carlos Donjuan.
Despite his commitment to supporting artists, Bennett still pursues his own work, with creative friends, in a dedicated space for art, photography, and music that he’s named the Imagination Lounge. “We have props and a costume closet. Some days I might just wear a costume the whole day, go grocery shopping in it, wear it to whatever I’m doing that day,” he says. And while he’s assumed the pseudonym of Marty for his children’s books, he’s by no means pulled in opposite directions between his life on the field and his creative life. “I’ve found that there’s no separation between the two—creativity and football. If there was, I would be cutting myself in half, and nobody wants to live as half the person that they are,” he says. “When I’m creating and playing ball, that’s when I feel most like me.”
Advertisement 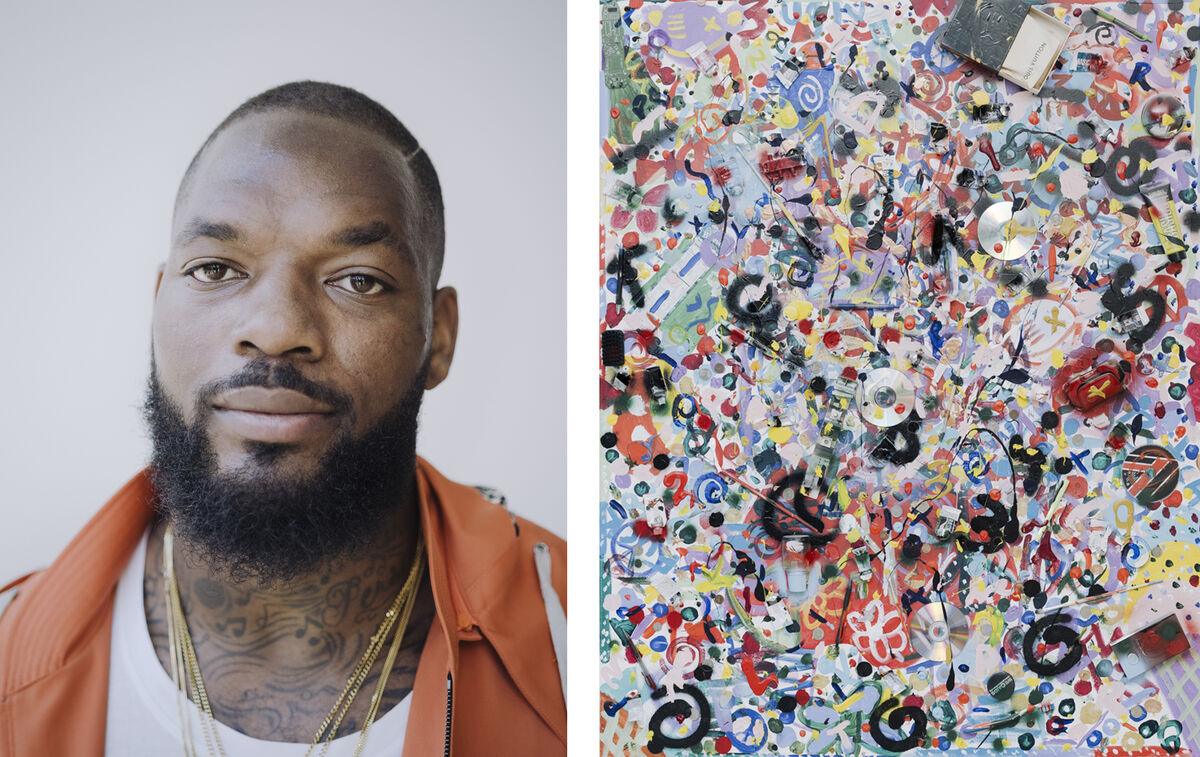 Bennett’s insatiable motivation in football extends to his work with The Imagination Agency. “Creativity is just like a muscle. The same way I do workouts, like sprints and cardio, to get better at football, I do with creativity,” he explains. “To work out you go to the gym, but for creativity, it’s usually drawing and writing in a notebook.” His teammates share his books with their kids, and they’ll often ask for his advice when working on their own creative projects. “Some guys are working on things like apparel or videos, and they call me for creative direction all the time.”
I ask Bennett, as a father and a creative professional, what can be done to inspire creativity in children? “Show them that creativity is limitless,” he replies emphatically. “A lot of times people try to get kids to color inside the lines, they try to contain their creativity to what they think is creative. It’s about cutting the reins loose and letting them become what they’re supposed to be, instead of what we think they should be.” He firmly believes there’s no such thing as “bad art,” and emphasizes the importance of giving children the freedom to explore, beyond reality. 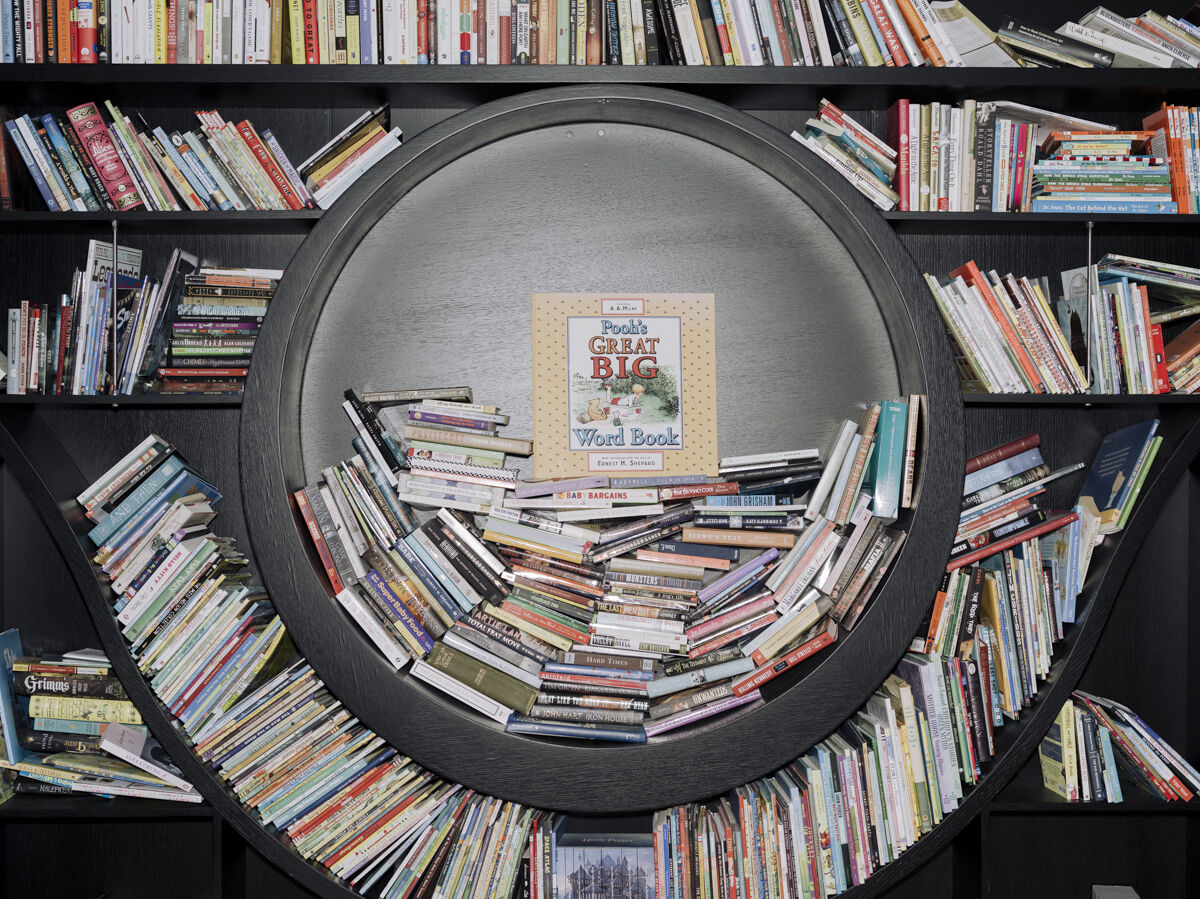 For his part, Bennett admits that it’s taking time for people to take his creative career seriously. “People look at athletes as these strong gladiators. So to think of a gladiator writing a children’s book, the juxtaposition of that is something that’s hard for people to follow,” he explains. “But now people are starting to see that this is who I really am, this is serious. Over time people are getting more hip to it, people are more in tune with what I’m trying to do and what I’m creating here.”
It’s not only children who can look to Bennett for inspiration. While he did begin The Imagination Agency with his daughter in mind, eager to inspire her to do whatever she wants to do in life, he also considered his own dreams, creative pursuits that were not yet fulfilled. Bennett could easily have let his creativity fade in the wake of his successful football career, but instead he carved out a permanent space for it in his life, for when football is no longer an option. And he’s still got dreams to chase: “This is all I want to do for the rest of my life,” he enthuses. “I want to create for the rest of my life. I want to make movies, tell stories, have bestsellers. I want to win a Super Bowl, an Oscar, a Newbery, a Grammy, one of every category. And people will be like ‘Man, that guy is awesome.’” 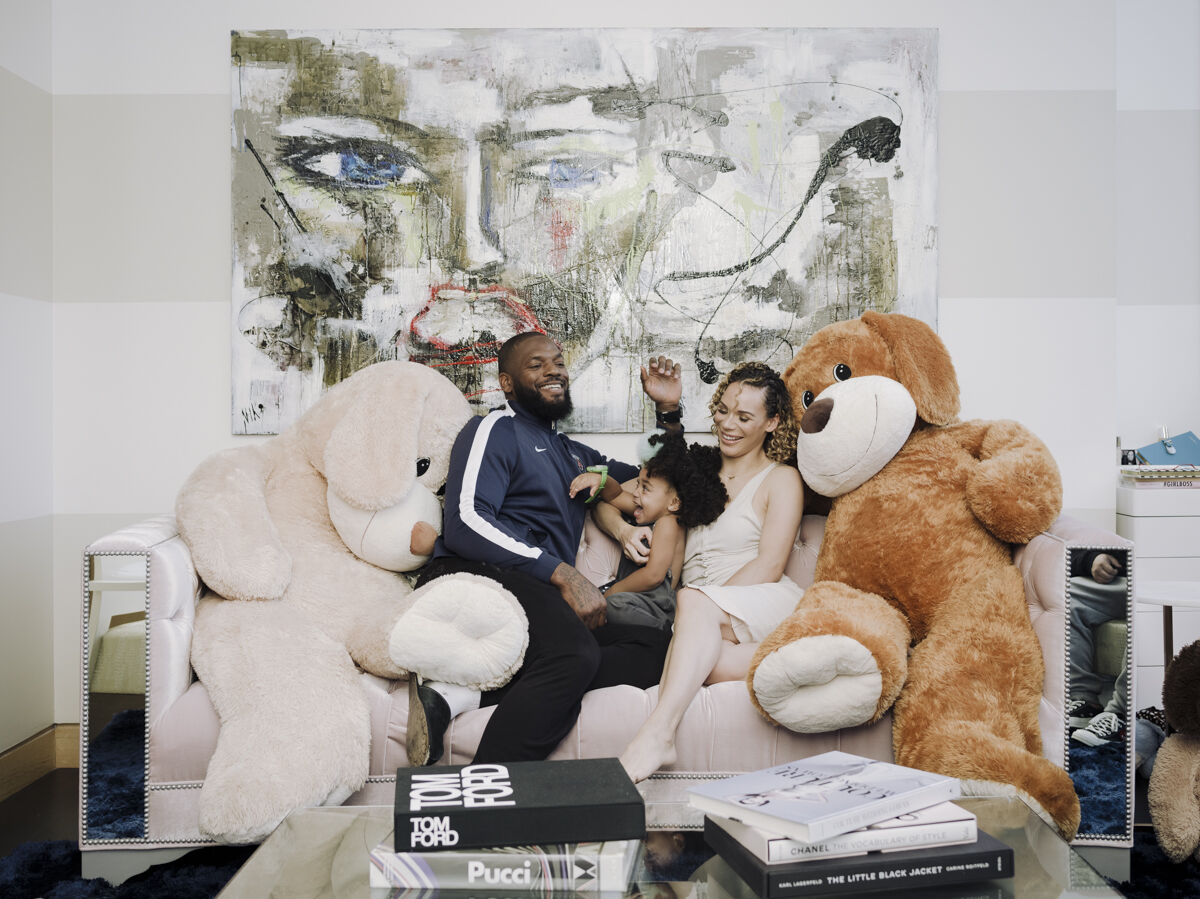 Portrait of Martellus Bennett, his daughter Jett, and his wife Siggi in their Chicago home by Whitten Sabbatini for Artsy.