Julie Baumgardner
Sep 22, 2015 9:44am
Actionable measures on energy-usage will meet their fate this week, with United Nations talks and public protests planned as part of Climate Week NYC. Climate change is arguably the most pressing sociopolitical issue of our time, with famine, poverty, and mass-relocation hanging in the balance. The romantic, rambling idylles and shimmering rivers of
J. M. W. Turner
and
Caspar David Friedrich
feel as quaint now as they were foreign to viewers at the time of their unveiling, viewers accustomed to Earth being represented as debased and unpredictable, an unruled beast man ached to conquer. Our contemporary landscape, too, feels foreign: seas are rising, fires spreading, and ice melting. It’s a process unseen by the majority of us across the globe who live in urban environments. But artists of today have internalized this fraught relationship and are responding in kind.

Robert Smithson
Spiral jetty, 1970
Repetto Gallery
The spectrum of artistic practices engaged with the environment is wide. But the term “environmental art” itself really only gained potency in the 1970s with the
Land Art
movement. It hit critical mass when
Robert Smithson
coiled rocks in a drought-stricken lake basin in Utah for his Spiral Jetty, which was subsumed by floodwaters three years later. (Thanks to another round of drought, the work is once again visible.) The term “environmental art” refers specifically to formal practices consciously connecting nature to art and is geared toward breaking sculpture, conceptual art, and performance out of the art world’s traditional, institutional bounds. In 1982
Joseph Beuys
staged 7000 Oaks at Documenta VII, planting, as the title suggests, 7,000 oak trees in and throughout Kassel, Germany.
Richard Long
has built a practice around picking up pieces of rock and terrestrial material and arranging them in naturally poetic formations, often inspired by ambles the artist takes through historically important paths. (For his current show at Sperone Westwater, up through October 24th, he traveled by foot from the Great Mosque of Córdoba in Andalusia, Spain, to the Cathedral of Santiago de Compostela in northwest Spain.)
But not all environmental art has been the domain of conceptual art kingpins. In time for Climate Week NYC, here’s a look at some of the more interesting approaches to environmental art on view today. 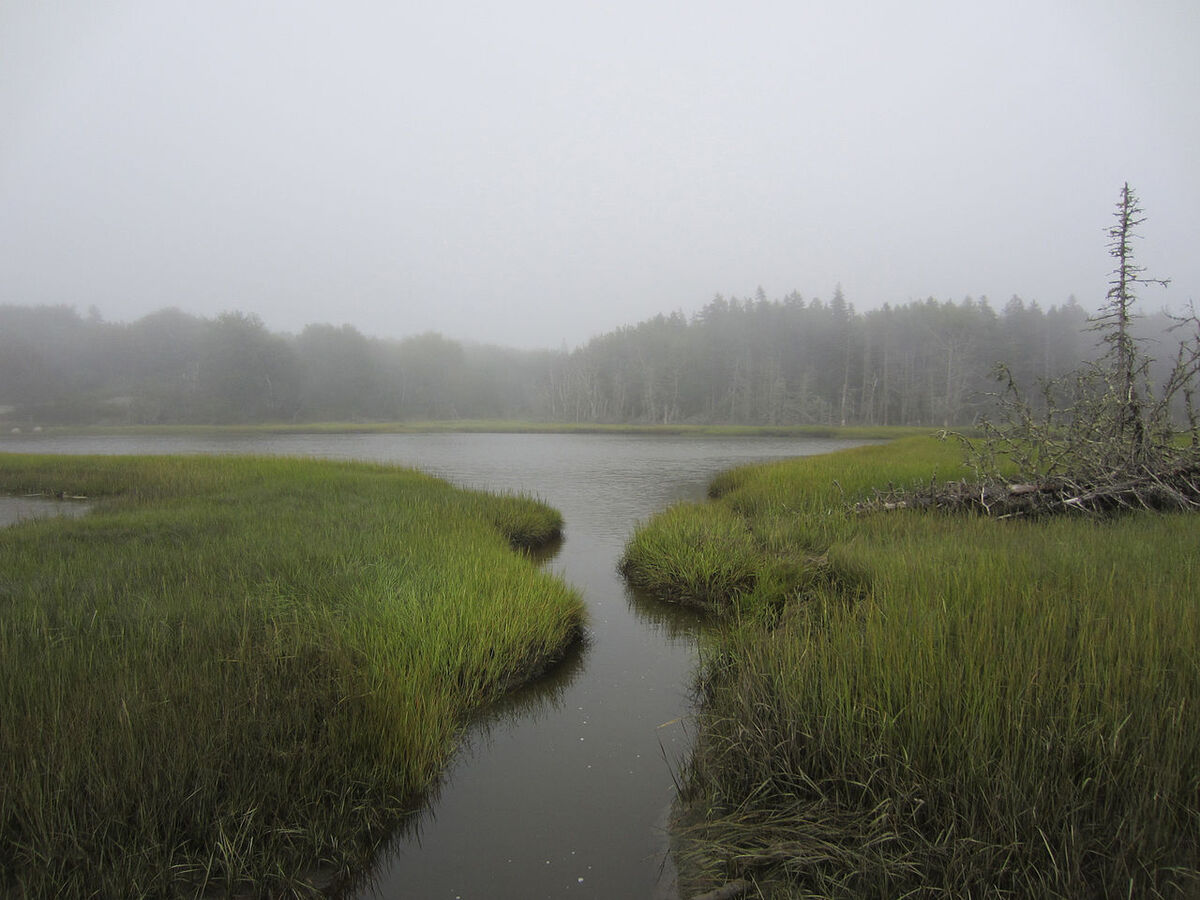 Advertisement
Ecofeminist Aviva Rahmani is known for occupying natural spaces to protest political situations that affect the environment. On October 5th, she will complete her piece Blued Trees for “Gulf to Gulf,” a New York Foundation for the Arts-sponsored project that connects climate change policy with art. The project is a direct response to the proposed Algonquin Incremental Market pipeline expansion, in which high-volume, high-pressure fracked natural gas will be pumped through private properties and passed within 105 feet of the ever-controversial Indian Point nuclear power plant. Rahmani found a plot of land in Peekskill, New York, and painted sine waves in blue across a tree grove to represent the musical notes that will then be performed by a full-symphony. She copyrighted the work as site-specific and protected it under the Visual Artists Rights Act (VARA). VARA asserts the “moral rights of art,” which Rahmani hopes to employ to indirectly prevent the land from being used for the pipeline. Rahmani’s practice aims towards the actionable, and there’s still time for the pipeline expansion to be overturned, perhaps due in part to Blued Trees. 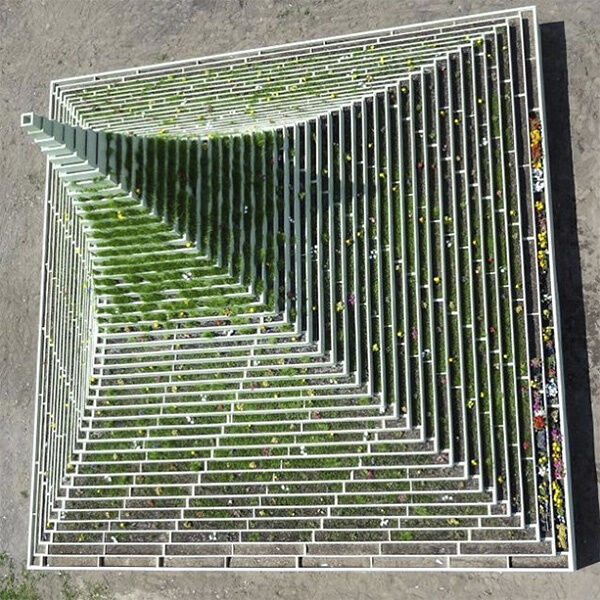 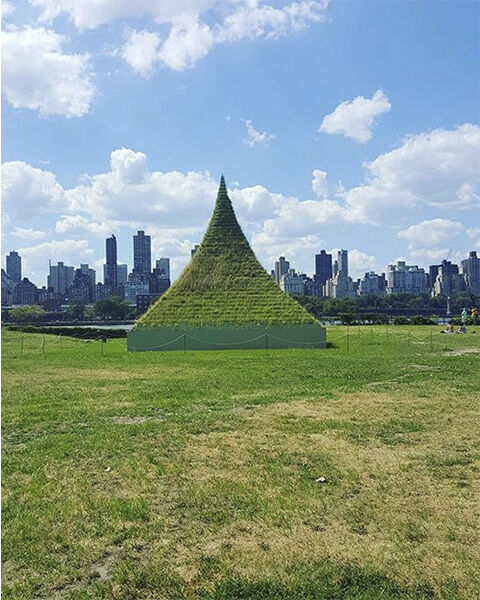 This summer, social media got a hit of Agnes Denes’s living sculptural practices when her The Living Pyramid, a new archetype for the artist, was planted in Socrates Sculpture Park, in Long Island City,  New York’s Astoria Park. Denes transformed a pile of dirt into a multi-tiered pyramid of grasses and flowers. She’s also installed an piece from her “Wheatfield” series—12 acres of wheat—this summer in the Porta Nuova District of Milan, a city which hosted Expo Milano 2015 with the theme of food security and environmental innovation. Denes began the series in 1982 with a Public Art Fund commission, planting two acres of rubble in a landfill on Wall Street (now Battery Park) with wheat that grew over the summer. 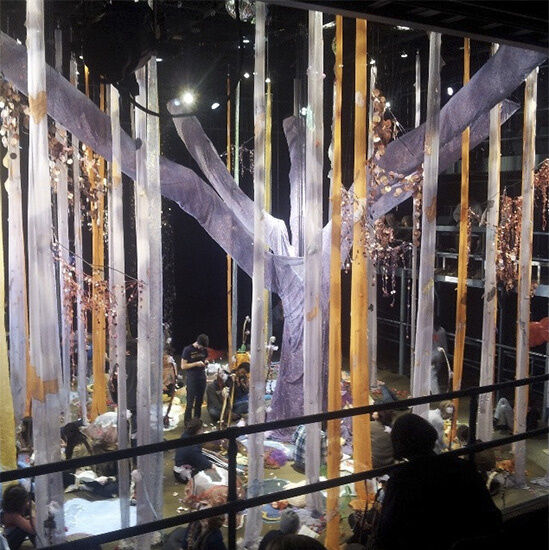 PearlDamour and Shawn Hall, How to Build a Forest. Image courtesy @logicoflaura, via Instagram. 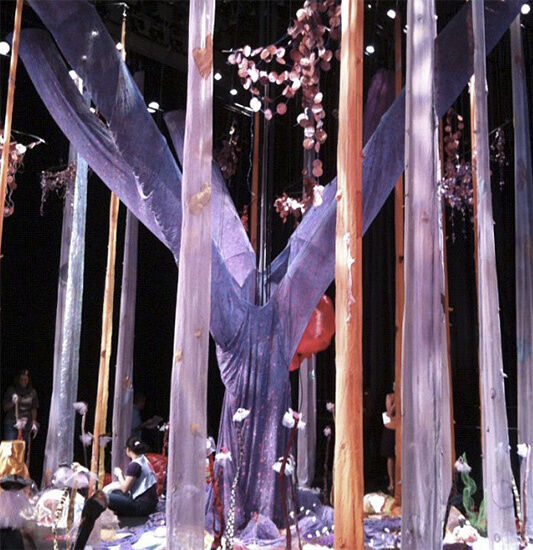 PearlDamour and Shawn Hall, How to Build a Forest. Image courtesy @offgridgrrl, via Instagram.

New Orleans’s Contemporary Arts Center, under the direction of Neil Barclay since 2013, commissioned performance duo PearlDamour (Katie Pearl and Lisa D’Amour) and visual artist Shawn Hall to realize How to Build a Forest. The eight-hour-long piece sees the artists constructing an ecological environment (inspired by a 100-tree grove destroyed by Hurricane Katrina) out of fabric and found materials, before disassembling it at the end of the day. Unveiling October 23rd, and repeated every night until October 29th, the work shows the artists’ intent to highlight the disconnect between urban dwellers and the great outdoors. While much environmental art is of an activist bent, this type of performance veers more towards the Romantic notion of nature as subject. 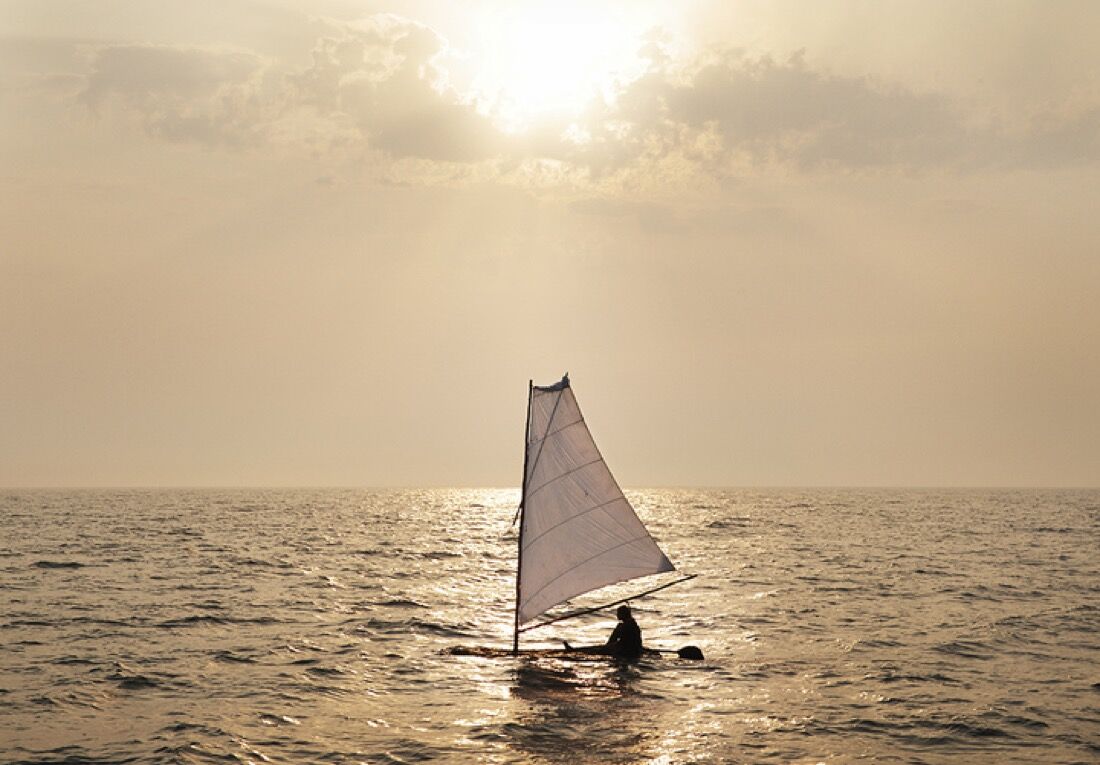 If there’s any question about the deep connection Finns have to the landscape, go to the Alvar Aalto-designed pavilion in Venice’s Giardini—or explore
Antti Laitinen
’s work. The artist quite literally “saves the trees” by adorning them with steel suits of armor. But Laitinen also moves beyond gimmickry when he explores human limitations in the face of nature, with projects like It’s My Island (2007), where he painstakingly built an island in the Baltic Sea by piling together 200 individual sandbags. For Bark Boat (2010), Laitinen built a raft of bark he scavenged from the forest floor and sailed across the Baltic. (Documentation of the work came to New York for the just-closed show titled “Future Fossils,” curated by Artsy’s own Tess Thackara and Yulia Topchiy.) Laitinen’s work harks back to an era where humans had yet to conquer nature with technology, instead working with and struggling against it for their survival. 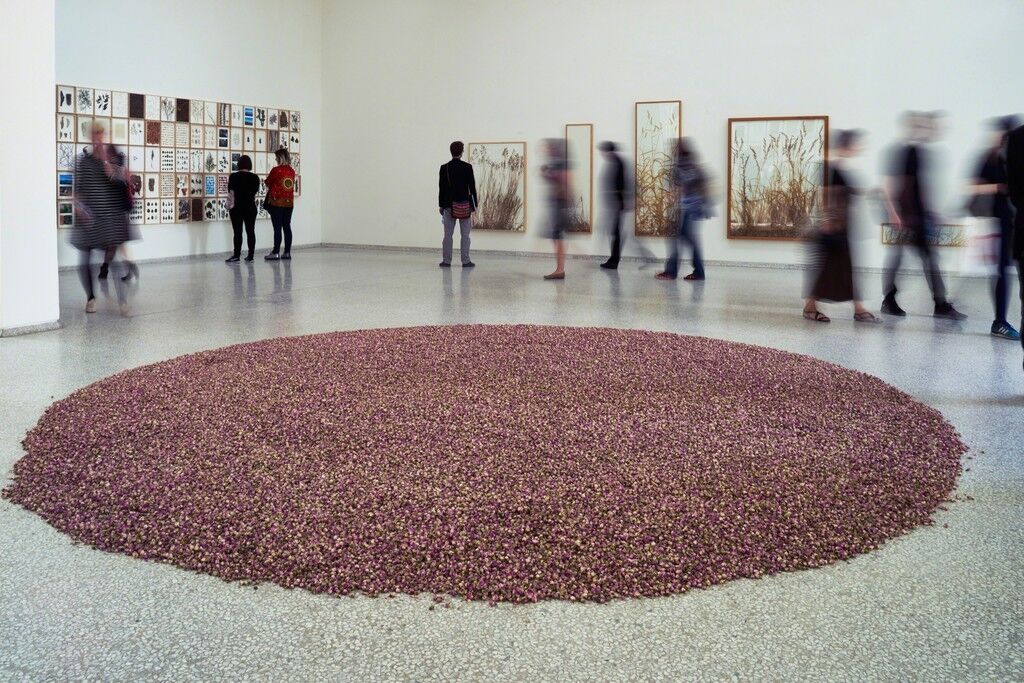 herman de vries
108 pound rosa damascena (Installation view), 2015
56th Venice Biennale
Any discussion of environmental art needs to include something on the art world’s favorite naked, Dutch uncle. The artist
herman de vries
, a trained naturalist and biologist, often creates site-specific performance meditation pieces where he heads into the forest and contemplates life (sometimes in the buff). But he also imbues nature with the outcome of his contemplations. For his project to be all ways to be, his contribution to this year’s Venice Biennale, where he is representing the Netherlands, he has displayed biological excavations, sculptures, and prints in the main pavilion. Meanwhile, on an island in the Venice Lagoon he has installed small granite-slab totems engraved with slogans such as “Life Is” or “Death was Here.” He also currently has an archive of plants and seeds at the Château de Rentilly in Seine-et-Marne, France, on view in a group show called “My First Summer in the Sierra,” inspired by the book of the same title by American naturalist John Muir. 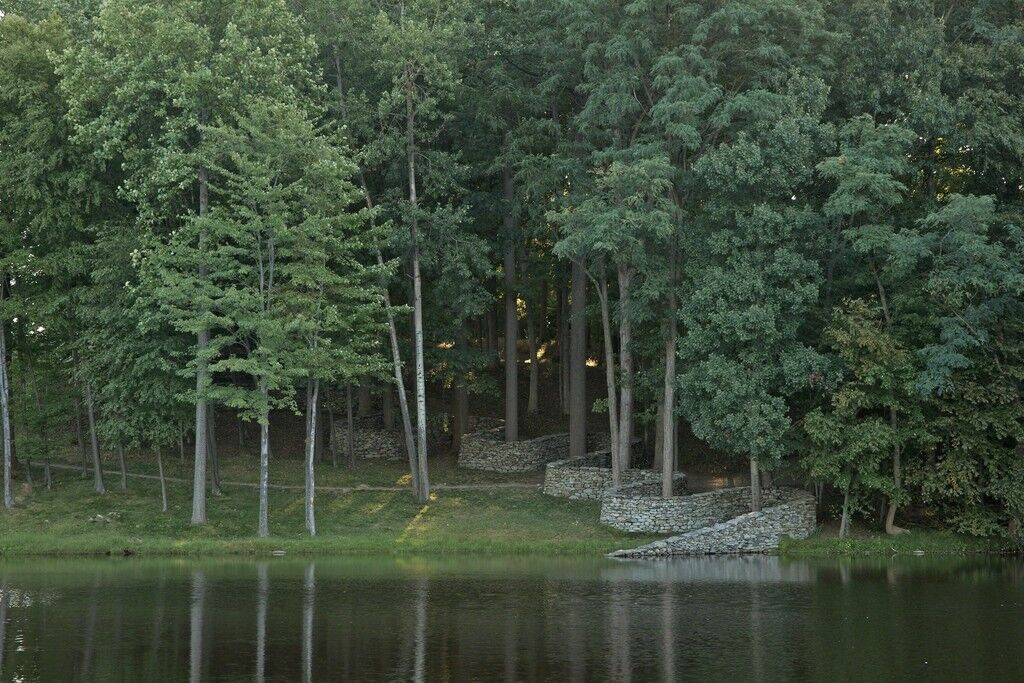 Andy Goldsworthy
Storm King Wall, 1997-1998
Storm King Art Center
Andy Goldsworthy
is one of the environmental art movement’s most prominent figures at the moment. He straddles the line between folksy activist and earnest fine artist with enough gravitas to be an O.B.E. (Britain’s knighted honor). The artist works exclusively with nature’s own materials, collaborating with the earth for ecological and aesthetic purposes. Goldsworthy often adorns or reimagines existing environments: rearranging fallen logs as lines formed through a forest or creating starbursts exclusively from icicles and spit. He also has a work on view in “My First Summer in the Sierra,” a piece of paper stained by a melted snowball and will open a show at New York's Galerie Lelong on October 22nd. 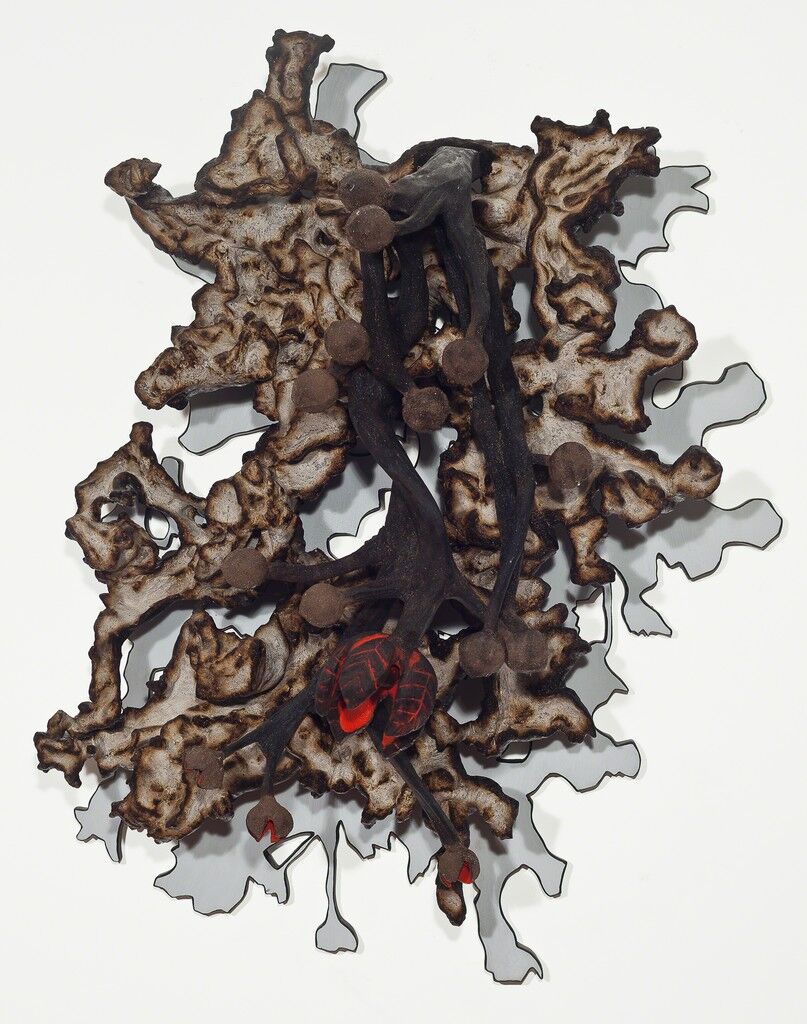 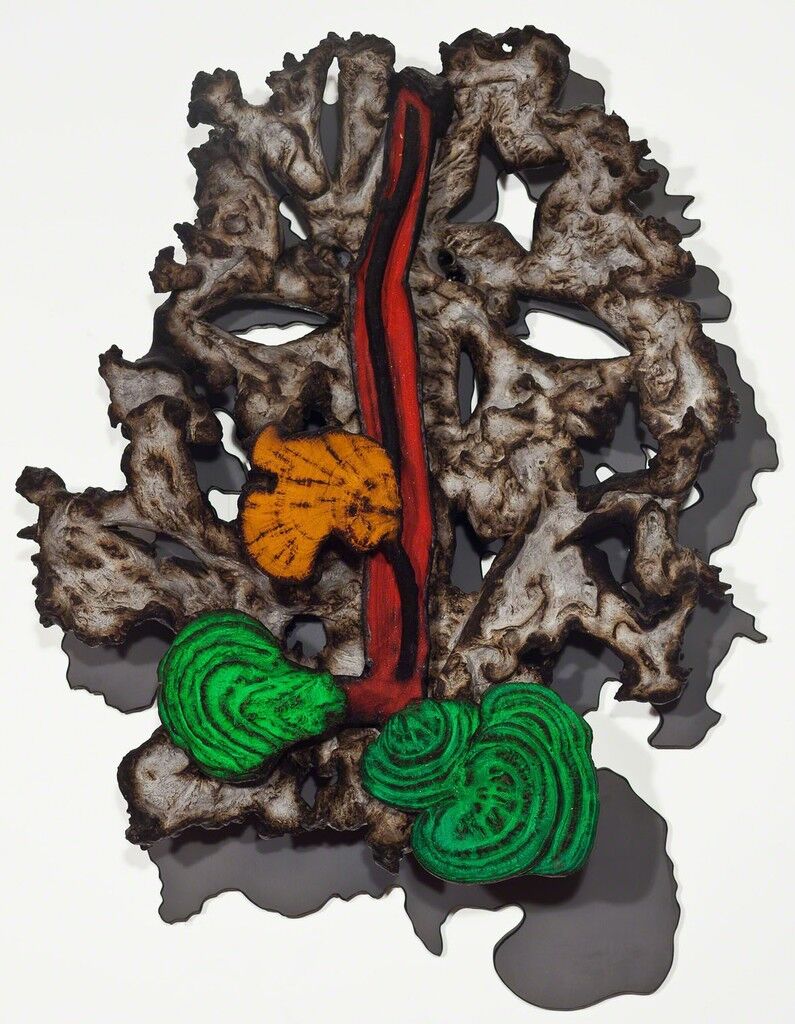 Frans Krajcberg
S/ Titulo - “sombra branca"
Marcia Barrozo do Amaral
At 94, the Jewish, Polish-born Brazilian artist
Frans Krajcberg
just can’t stop tinkering with trees. He’s made it his life’s practice to integrate and advocate for nature, working across painting, photography, and sculpture. The Montparnasse Museum dedicated a room for him to keep his project “Manifesto of Integral Nature”—part of an ongoing effort to highlight the destruction of the world’s forests—literally alive. And he devised an environmental education curriculum that he distributed throughout elementary schools in Brazil. His hauntingly beautiful nature paintings of organic matter  are currently part of the exhibition “The Channel,” in the Istanbul Biennial. 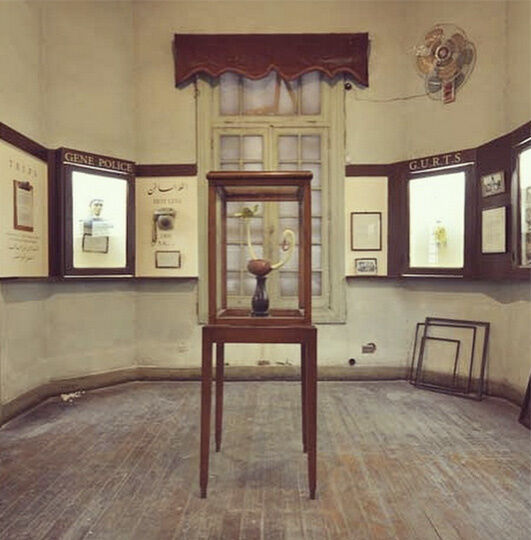 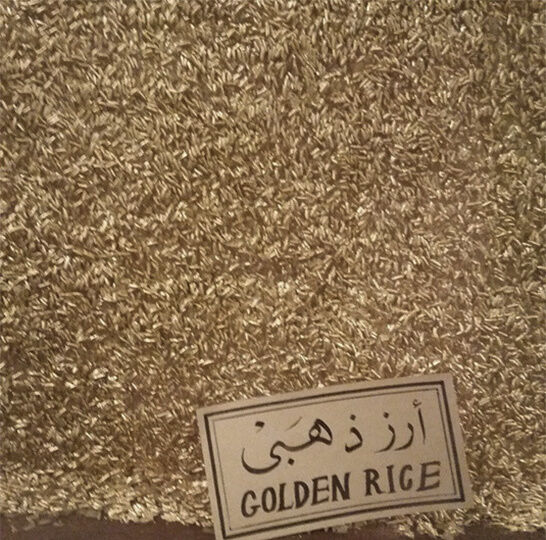 Perhaps one of the cheekiest jabs at climate policy failure is the utterly sardonic and intelligently researched WAM (World Agricultural Museum), which until June was on display at the Sharjah Biennale. The piece was housed in Port Khalid, a site of migrant fishing boats, which frequently meet their fate in the armed hands of Somali pirates. The installation was a dusty, untouched world of a colonial agricultural museum, in which fascist and absurdist politics rule environmental policy. It’s dark, deeply funny, and also frightfully realistic.
Asunción Molinos Gordo
, who works between Egypt and Spain, isn’t necessarily an environmental artist but her cutting commentary, especially on environmental policy, is an edge that the art discussion needs.
Julie Baumgardner
Related Stories