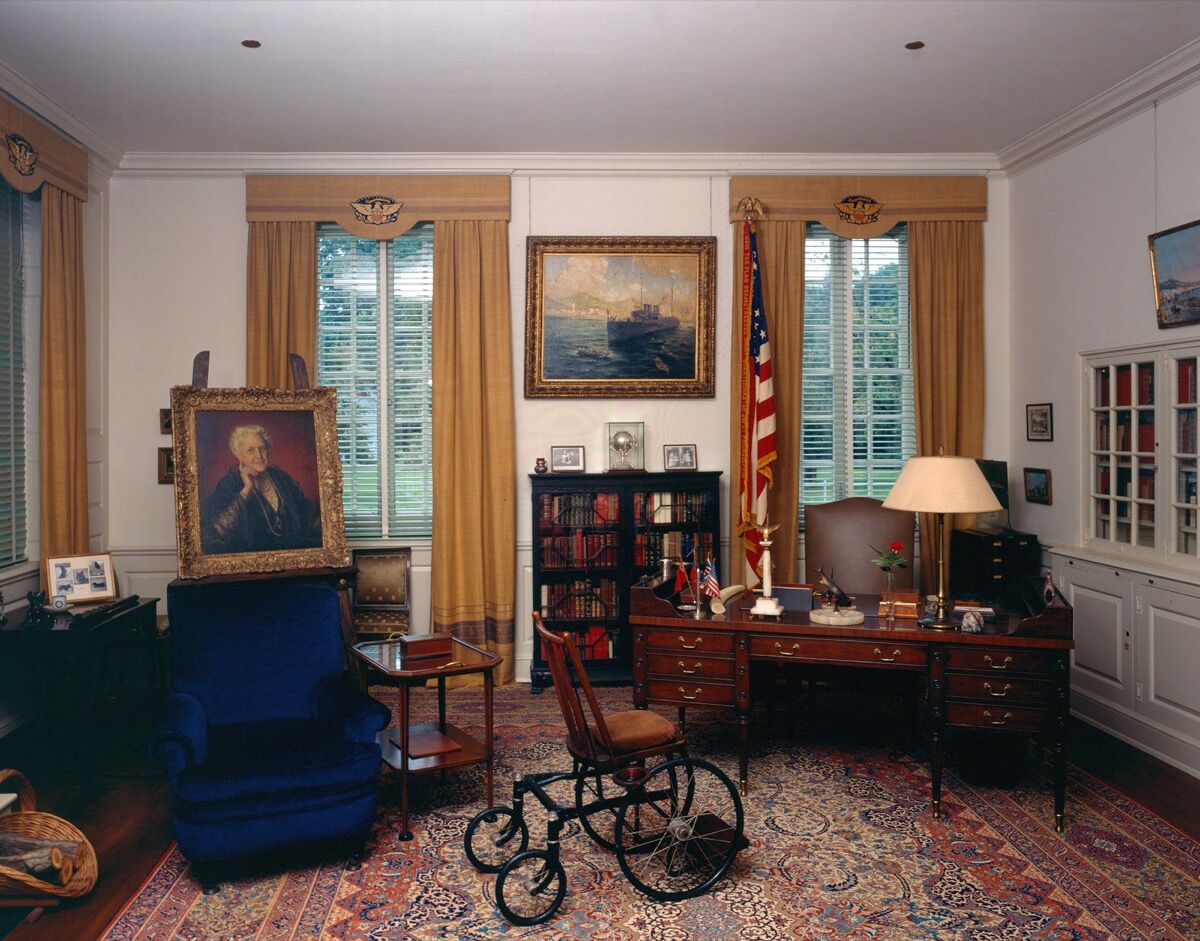 President Roosevelt’s private study, preserved as he left it during his final visit in March 1945. Photo by FDR Presidential Library & Museum, via Flickr.

Presidential libraries are the subject of political quarrels and oversized personalities. Critics feel that these centers bolster the ego of the officeholder and their administration rather than give an objective account of history. Even fans of the presidential library tradition will admit that they are self-constructed monuments, providing a vision for how presidents and their supporters wish to be seen and thought about by future generations.
No exception, President Obama’s plan for his library is exactly the kind of shimmering, futuristic project one would expect from the 44th person to hold the office. And even as President Trump is not even a year into his first term, some are already hypothesizing about what his library might look like.
Every library is different. But Republicans tend to favor traditional, classical architecture while Democrats embrace Modernism and elements of
International Style
for their libraries, notes Benjamin Hufbauer, author of Presidential Temples: How Memorials and Libraries Shape Public Memory. Together, these libraries showcase some of the world’s greatest architectural talent—but they’ve also experienced no shortage of controversy.

The first presidential library, and the only presidential library to open during a president’s term, was Franklin Delano Roosevelt’s in Hyde Park, New York. Roosevelt himself designed the modest fieldstone structure with materials from the Hudson Valley. Never again would a presidential library look so humble, however, says Anthony Clark, author of The Last Campaign: How Presidents Rewrite History, Run for Posterity & Enshrine Their Legacies. But don’t mistake that fact with personal humility. “Roosevelt was a wealthy man, it served his legacy well to look like this isn’t a monument to himself,” Clark says. (After publishing his book, the government committee that oversees presidential libraries asked Clark to come work for them.) 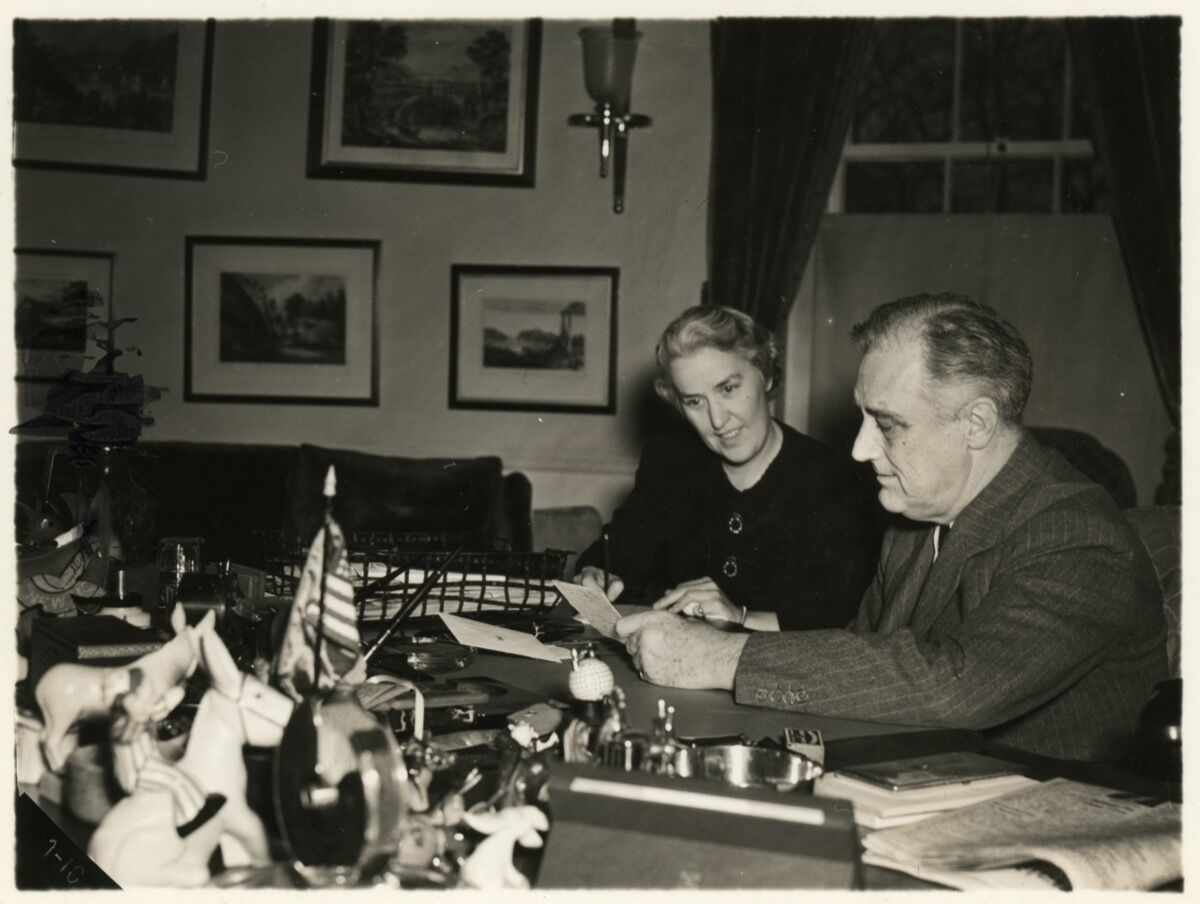 Marguerite "Missy" LeHand and Franklin D. Roosevelt pictured working together at the President's desk, May 22, 1941. Photo by FDR Presidential Library & Museum, via Flickr.

Perhaps the most famous presidential library design is actually in France. If you’ve been to the Louvre in Paris, you’ve seen Boston’s John F. Kennedy Presidential Library and Museum. Well, not quite. But you have seen I.M. Pei’s original vision for the presidential library: a glass pyramid. That design was scrapped and recycled in Paris, causing as much righteous indignation as it originally provoked in Cambridge.
In 1955, the Presidential Libraries Act encouraged presidents to donate their papers to the federal government for future preservation. In 1978, the Presidential Records Act legally bound presidents and vice presidents to turn these records over. (The act took effect in 1981.) While the Presidential Libraries Act stipulated that the libraries would be private foundations maintained by the government, a 1986 update demanded there be a private endowment in proportion to the scope of the library—thereby easing the financial burden on the National Archives and Records Administration (NARA). This public-private partnership has caused most of the conflict around presidential libraries and their financing. The architecture of these sites is not immune to that. 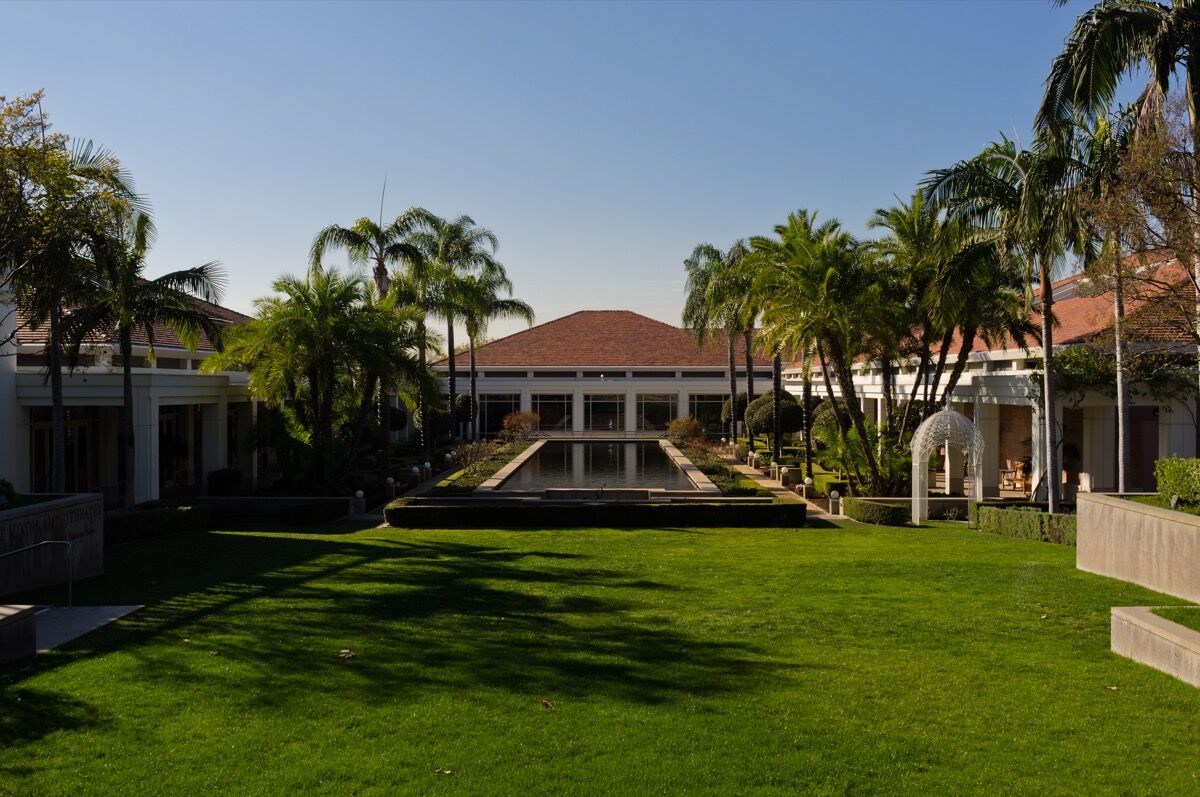 Advertisement
The Richard Nixon Presidential Library and Museum is a prime example of the disconnect between public perception of a president and the supporters who fund their private foundation. In the first ever televised presidential debate, which pitted Nixon against Kennedy, Nixon famously refused to sport stage make up and thus came across pallid and clammy. But today the palm tree-lined reflecting pool at his library in Yorba Linda, California looks like the meditative retreat of a cool, West Coast personality. Though his childhood home sits adjacent to the library, the design doesn’t exactly square with the public image of Nixon, who Clark points out was once awkwardly photographed in dark dress shoes and socks on the beach.
Recasting the image of a person is one thing, but presidential libraries also educate the public on the history of the leader who built them. So how did the Nixon library address the famously paranoid president? When it came to the library’s Watergate exhibit, Nixon’s private supporters exerted their influence to make the display essentially a piece of propaganda, putting immense pressure on the now former library directory Timothy Naftali to acquiesce rather than correct it (Naftali eventually succeeded in making the exhibit accurate). But beyond Watergate, the dispute raised questions about who gets to write the history of any issue dealt with at a presidential library. “Should we really let Nixon loyalists write the script for the library’s story of Vietnam, which thousands of Americans will view?” asked Naftali. 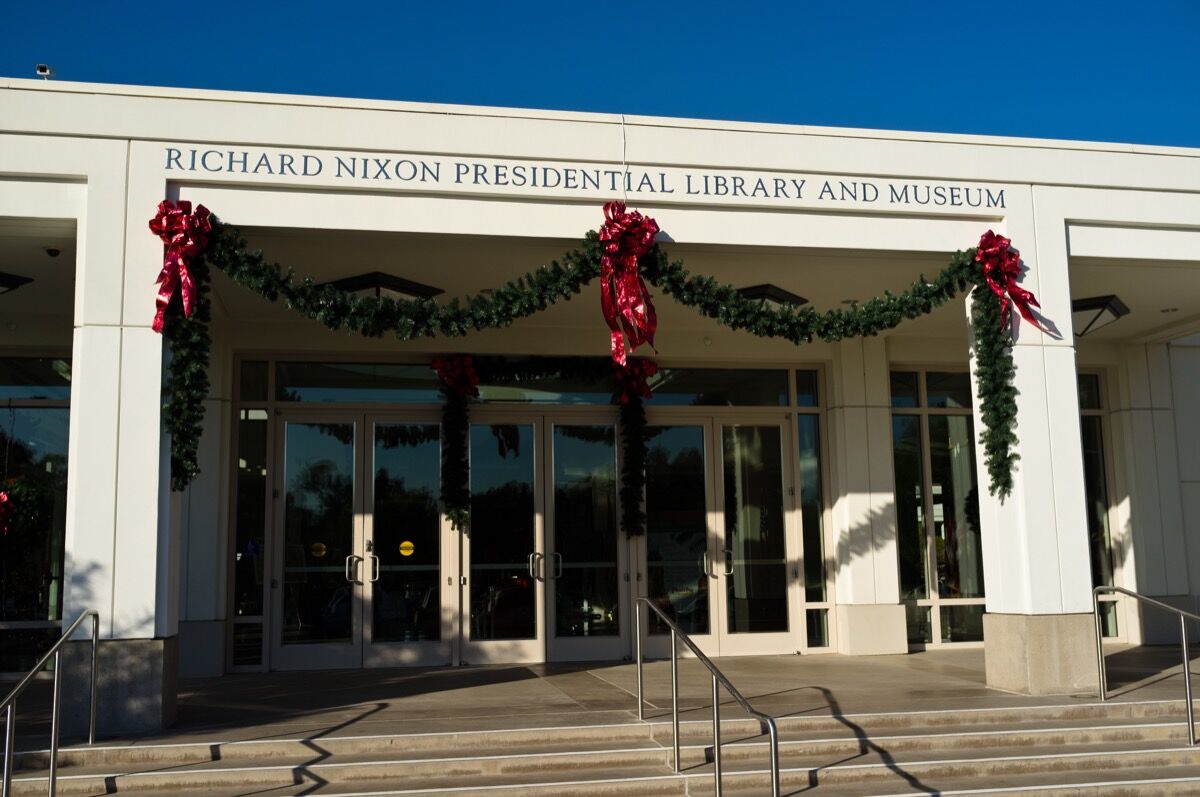 “Presidential personalities can be disturbing on both sides of the party line,” says Hufbauer, who is also Associate Professor of Art History at University of Louisville. “Roman emperors could have an exaggerated list of ‘things achieved’ engraved in stone, written with the help of their advisors. These ancient examples are prequels to the self-promoting museums in presidential libraries,” Hufbauer wrote in Politico. He compares the design process, of which the president is an active participant, to the poem Ozymandias by Percy Shelley. The effect of megalomania run amok is often more pronounced at the end of a failed presidency. Democrat Lyndon Baines Johnson is an example of that.

“LBJ was hounded out of office,” says Clark, “The thought of him working his whole life for that moment then not getting the chance to have his second term on his own, I think he was thinking ‘I have to make sure people know that I was a great man.’” For this purpose, a low-lying fieldstone structure like FDR’s simply wouldn’t do. Hufbauer actually likes the “elegant
Brutalism
” of the Lyndon Baines Johnson Library and Museum, but admits many do not. The Gordon Bunshaft-designed building is topped by a horizontal outlook. “In abstract form, it’s almost like Lyndon Johnson leering down at you,” says Hufbauer. “They’re all really iconic,” he says of the libraries, “but the metaphors that they evoke are just very different,” he says. 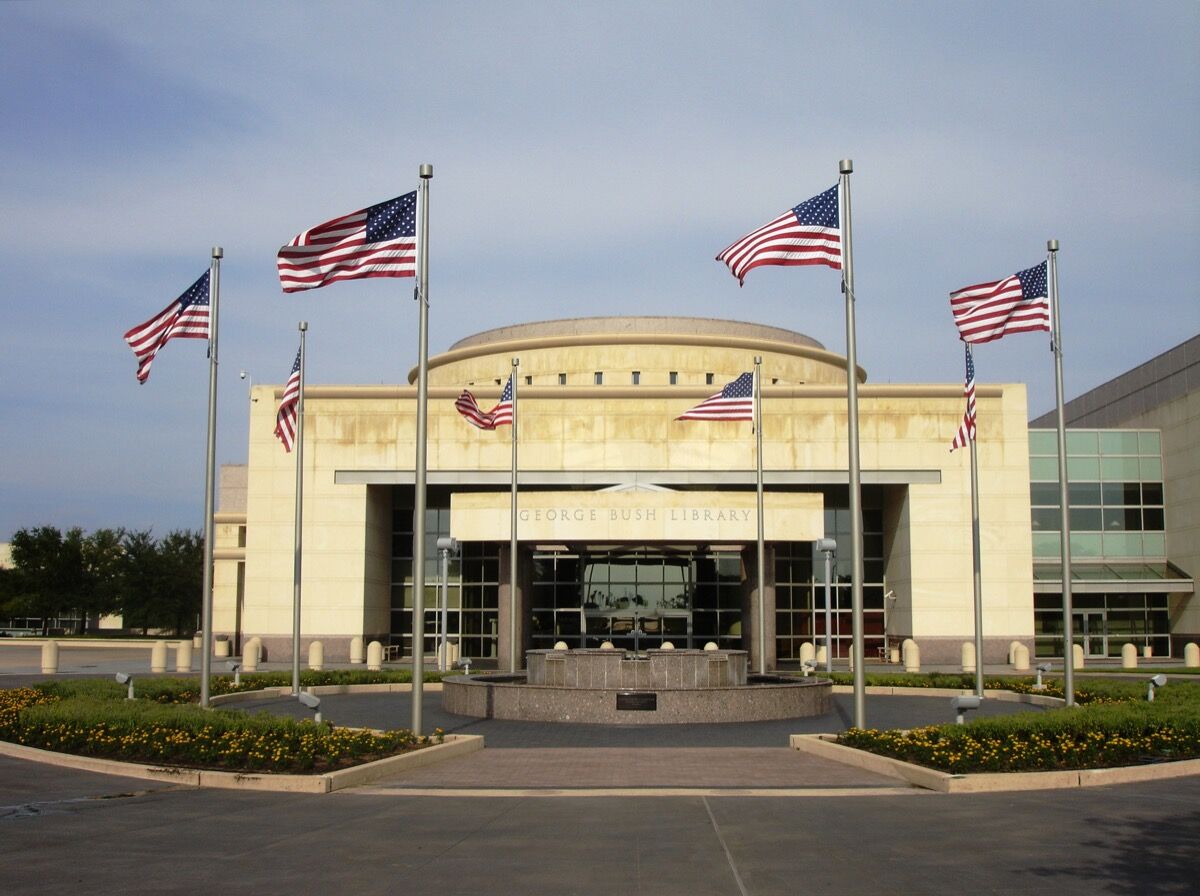 One example is the George Bush Presidential Library and Museum on the Texas A&M University campus. The rotunda now at the entrance of the library—which is one of three buildings in a complex—was actually added later in the design process, at the urging of Bush’s advisors, to make the building more formal. The Classical elements favored by other Republican libraries were then incorporated further through a colonnade “to reference the rhythm of the library,” explains Kathrin Brunner of architecture firm HOK, one of the building’s project designers. The formal significance of the rotunda was further enforced by the materials. “The presidential library is mainly limestone whereas the other two buildings [in the complex] are mainly clad in brick…so there is also a slight material hierarchy,” Brunner says.
The focal point of the Bush complex design was initially shared outdoor space, as the site of the library slopes gently towards a creek and small lake, uncommon features for the flat Texas landscape. Even through the changes, Brunner says that focus was preserved. And the symbolic and aesthetic importance of landscape has been taken up by other presidential library architects working for presidents across the aisle. Richard Olcott of Ennead Architects was a design partner for the William J. Clinton Presidential Center in Little Rock, Arkansas. The cantilevered, semi-transparent pavilion mirrors the silhouettes of Little Rock’s famous ‘six bridges’ which span the Arkansas River, Olcott explains. 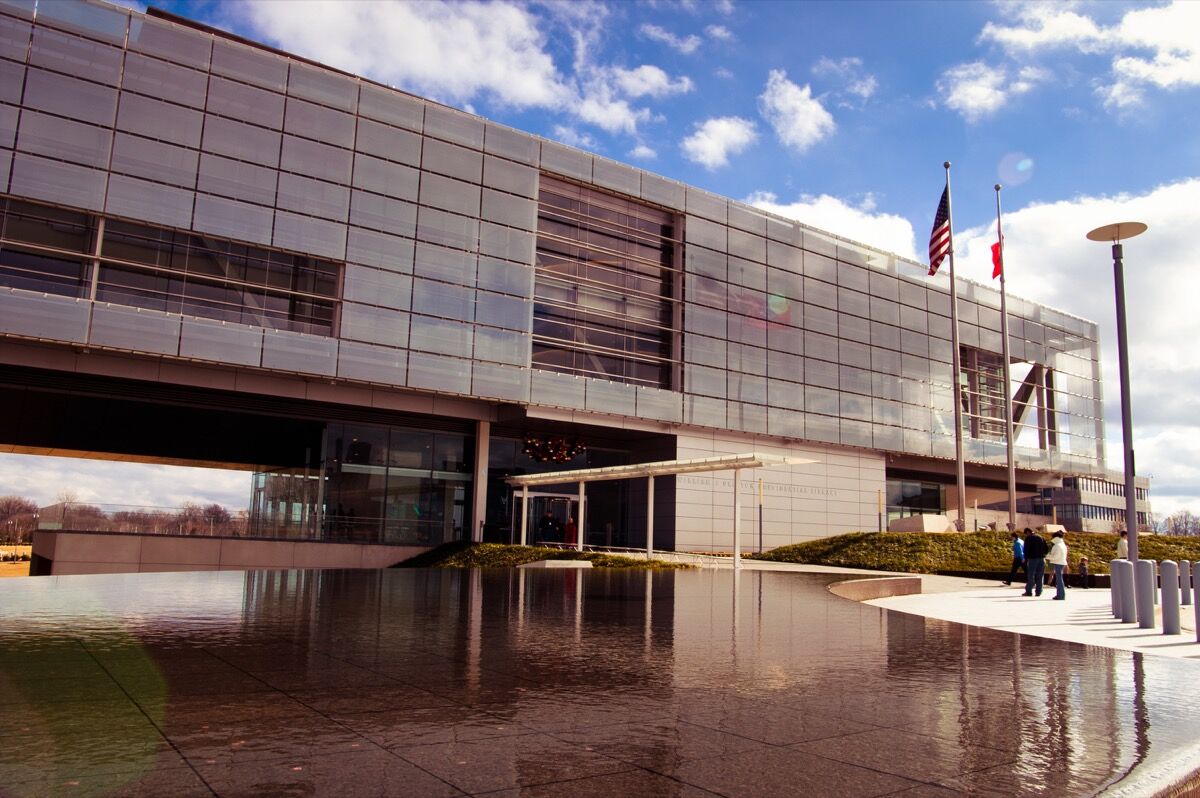 But the architecture also echoes the work of International Style architects like
Philip Johnson
and
Mies van der Rohe
. “Clinton loved this metaphor of a bridge to the 21st century. He just latched onto that idea and never let it go,” says Olcott. The 28-acre public park that the building sits in was no afterthought to the design, and was key to Clinton’s vision of revitalizing a depressed section of the city. “It’s a real civic amenity in a way that’s way beyond being a presidential museum,” Olcott says.
In May 2017, President Barack Obama spoke on a panel about plans for the Barack Obama Presidential Center on the southside of Chicago. Rather than relying on a partnership with NARA, the center will be run and funded completely privately—though NARA retains control over Obama’s paper documents. It will also be the first presidential library to have all its materials digitized. Like the Clinton library, revitalization is an important element of the project. “We are looking at transforming Jackson Park so that it once again becomes a people’s park,” Obama said. Like previous Democratic presidents, the design is both futuristic and modern. The Los Angeles Times compared the design of architects Tod Williams, Billie Tsien and Dana Griffin to a “truncated obelisk,” also noting “the design makes a clear effort to steer clear of classical references — or any recognizably European motifs.” Reportedly, there was also some ego at play in the development. President Obama told the husband-and-wife architects that the initial design was too “unflashy.”
In 2016, Clark wrote a scathing post titled “How Presidential Libraries Helped Create Trump,” in which he decried that “a presidential library allows a president to build his own monument. And rake in the cash while sticking it to the taxpayers.” Looking forward and thinking about the future design of President Trump’s library in the pages of The New Yorker, Jeffrey Frank imagines a replica of the Trump Tower escalator and an archive of tweets. President Trump has shown his taste for gold, and some have said, a kitsch version of Versailles. But whichever architecture firm takes on this formidable task, presidential ego is sure to be a lead architect.
Daisy Alioto
Related Stories

Inside the Homes of the Artists Keeping Austin Weird