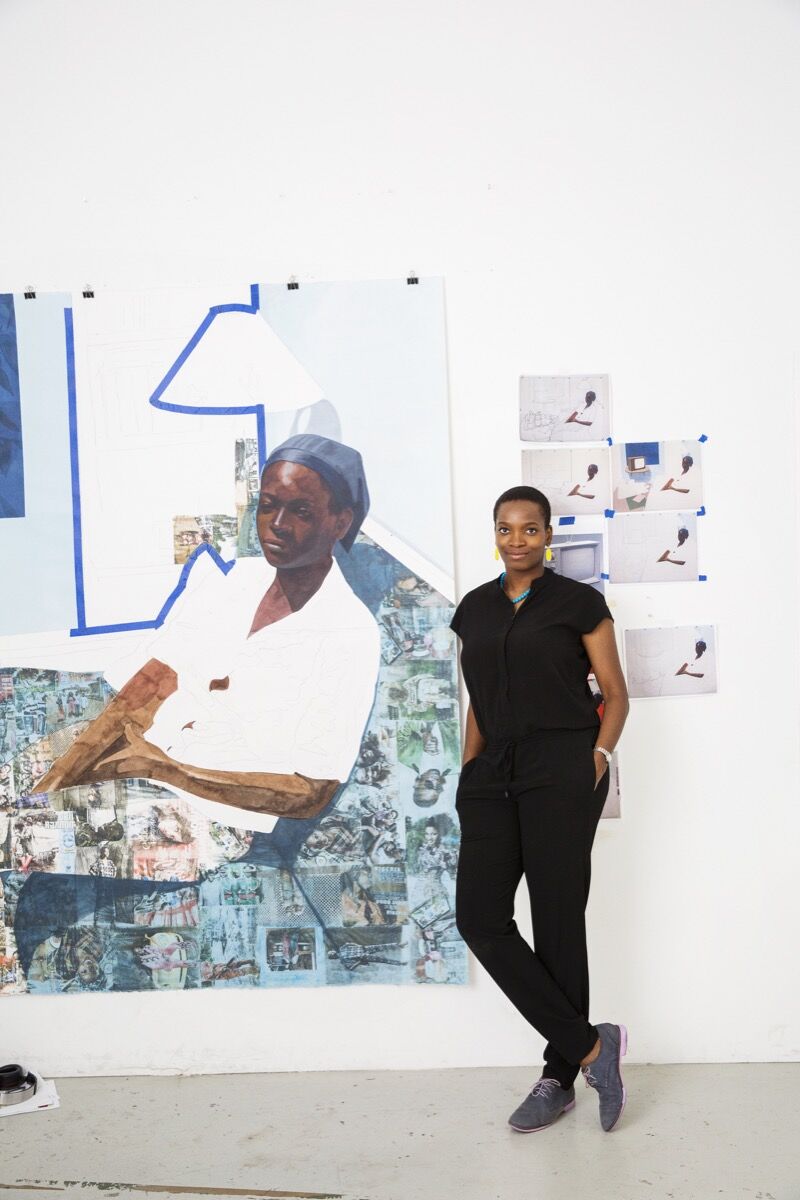 Every painting tells a story. The massive paintings of Nigerian, Los Angeles-based artist
Njideka Akunyili Crosby
—her works stretch more than 11 feet in height or width at times, or more, if you consider her recent billboard commission at the Whitney in New York—tell many. They tell stories of colonialism and cosmopolitanism; they speak in English and Igbo. Just as a story is understood differently depending on where you come from, Akunyili Crosby’s paintings offer different perspectives, depending on where you stand.
In her first U.K. solo exhibition this October, “Portals” at Victoria Miro, London, Akunyili Crosby has taken this sense of perspective a step further. She’s delved into what post-colonial scholar Homi K. Bhabha dubbed the “third space”—a liminal in-between where cultures converge, and are conflated. This idea quite literally surfaces in Akunyili Crosby’s many-layered paintings, where the closer you look, the more you see. At a distance, her enormous tableaus are gorgeous depictions of domestic daily life—a young woman seated at a table set for breakfast, or an intimate moment shared between a couple in a living room, for example. But as you approach these paintings, a different narrative emerges: Close in on these works, until your nose almost touches the paper, and you can make out countless images within the images. Akunyili Crosby fills her paintings with acetone photo transfers of Nigerian pop stars, politicians, military dictators, Nollywood stars, and celebrities she would see on TV, growing up in the ’80s, as well as personal snapshots.

“The show represents a full year’s worth of work,” the artist tells me. “I’m excited about seeing this much work in one space. It’s really rare to have an exhibition with works that hit different notes, so people see the various aspects of my practice.” She invites visitors to venture through the works as though they were stepping through portals; it’s not a journey into the past or the future, but into personal spaces, at present. “I like thinking of these works as openings into someone else’s life, so you feel invited in to experience a very private moment or space, and I think that enhances the intimacy,” Akunyili Crosby explains.
A mesh of old and new imagery, as well as traditional and modern media—in addition to photo-transfers she uses acrylic, charcoal, and colored pencils—process is essential to Akunyili Crosby’s cosmopolitan style. She’s influenced as much by European masters as by the household products that she collects in Nigeria. One gets a very physical sense of perspective through her works; you’re led instinctively to the big picture ideas about the way cultures, histories, and identities intertwine.
Born in Enugu, educated at Yale, and currently based in Los Angeles, Akunyili Crosby’s paintings naturally contain a range of memory and experience—social, cultural, and political—that reflect her background. She was raised as one of six children in a middle-class family that eventually became wealthy, with a powerful female energy (her mother was a well-known and highly respected political figure in Nigeria). Akunyili Crosby moved to the U.S. at age 16, and later married an American (who features in some of the paintings, alongside the artist). 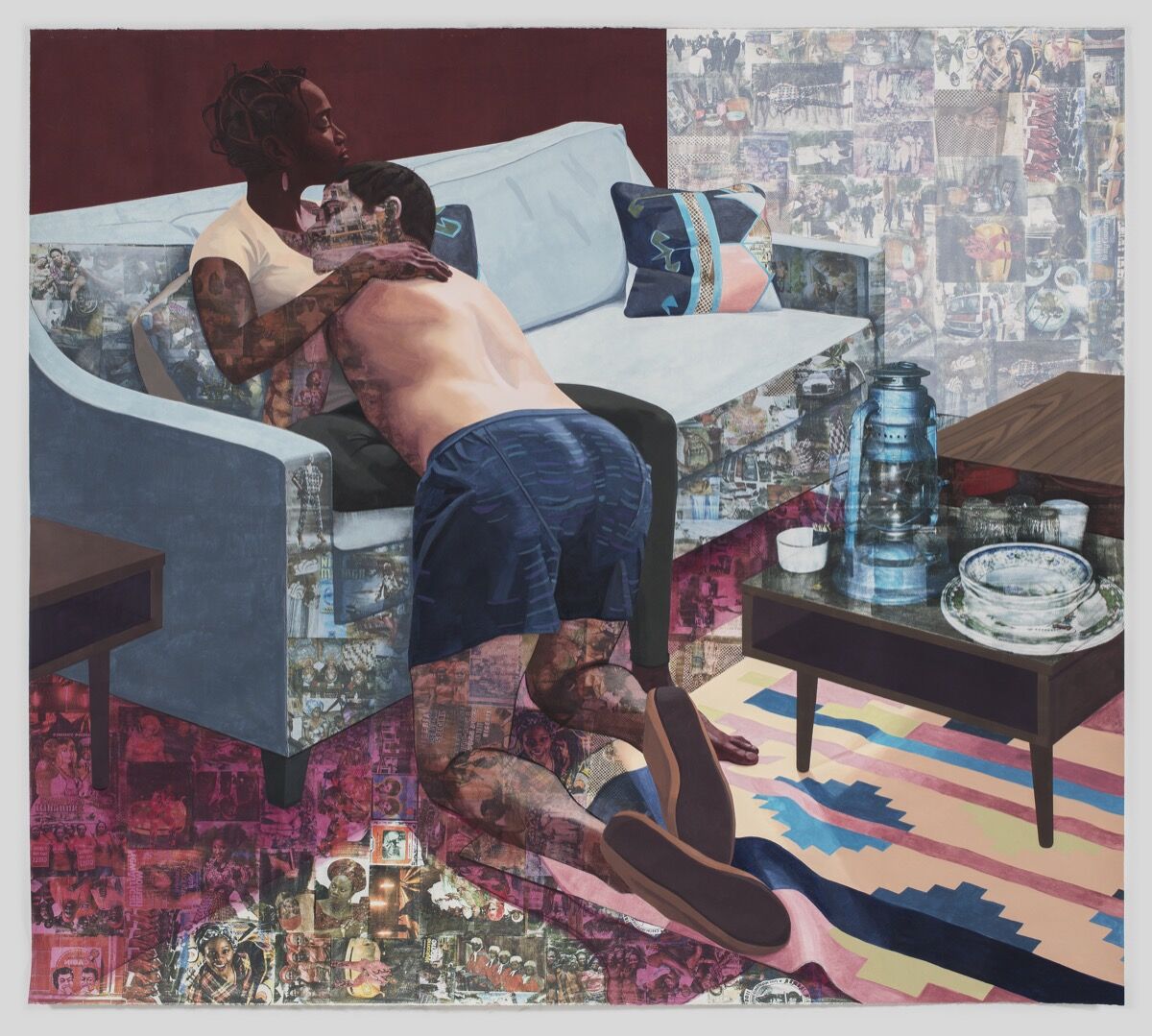 Advertisement
In his book Black Skin, White Masks (1952), Frantz Fanon (an influential voice among post-colonial studies) wrote of the possibility of shaping your own story: “In the world through which I travel, I am endlessly creating myself.” Half a century later, Akunyili Crosby is materializing her own narrative in the post-colonial discourse, in which Nigeria isn’t a victim, nor is the West an oppressor. Her paintings don’t create a feeling of dissonance or opposition; rather, everything becomes one. You get the feeling that she’s comfortable moving between worlds, as she is moving between materials. That’s partly, of course, because her own stories and migrations have been, for the most part, happy ones. It’s a story of agency that needs more visibility. Take the Nigerian “tea time” tradition. “In a work such as Super Blue Omo (2016), I’m looking at tea culture in Nigeria and how, at this point, it is so different from tea culture as we inherited it,” she says, referring to one of the newest works at Victoria Miro. “I’m interested in how those colonial imports get owned by the places that import them, and become unique as they evolve and become their own thing. The way you have tea is not the way we have tea,” she offers. “The way we have tea is with powdered milk, powdered chocolate drink, and sugar… It’s actually hot chocolate, but we call it tea!”
Different viewers will find different elements of these works that resonate, but as a product of British colonialism myself, I find something comforting in the harmony between Akunyili Crosby’s worlds, which is so different to the typical story that’s often told. That’s not to say her paintings lack tension, but it’s subtle and complicated—you literally have to look for it. Tension lies in a familiar composition, which points to the white male-dominated history of painting (The Twain Shall Meet, 2015, recreates
Vilhelm Hammershøi
’s 1899 painting Interior), and in the patterns of textiles that furnish her works, which suggest of the corruption in Nigeria’s recent political history. It’s in the blue-tinged figure of Super Blue Omo, who sits alone while a tea tray is set for two.
In one of the key works of “Portals,” titled Ike Ya (2016), a couple embraces, in a gesture, as the exhibition text describes it, “that seems as conciliatory as it does affectionate.” This, above all, may be the overarching story Akunyili Crosby’s paintings tell. They equally embrace a spectrum of narratives—of Nigeria, Europe, and the U.S., of 50 years ago and of yesterday, of colonialism and independence, the familiar and the foreign, black and white. And they do so with fondness and acceptance.
Charlotte Jansen
“Njideka Akunyili Crosby: Portals” is on view at Victoria Miro, London, Oct. 4–Nov. 5, 2016.
Related Stories