How Noguchi Sculptures Inspired the Paper Lamps We See Everywhere Artist and designer
Isamu Noguchi
spent his life bending and breaking the definition of sculpture. “Everything is sculpture,” he famously declared. He even believed light—immaterial and weightless—had the potential to carry evocative power.
Early in his career, Noguchi developed a prototype for a neon tube sculpture, and later, an internally lit, musical weathervane. But it wasn’t until he was in his late forties, around 1951, that he created a light sculpture that would fully encapsulate his ideas about lighting: a delicate paper lantern that transformed both centuries-old and contemporary notions of the lamp. He called his invention akari—the word for “light as illumination” in Japanese—and would continuously reinterpret it until his death in 1988. 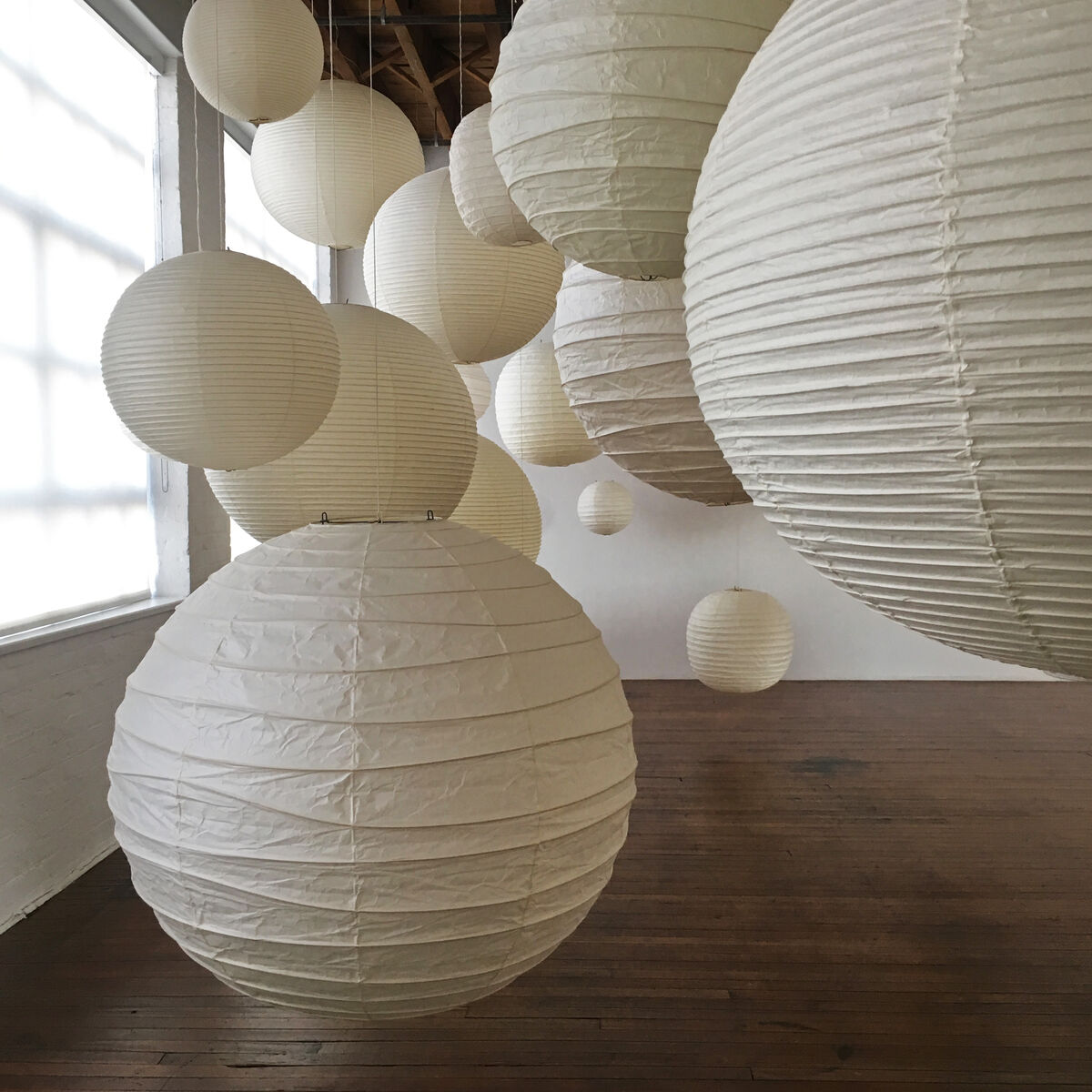 Airy and fragile, each akari consists of a skeleton of bamboo ribbing carefully dressed in washi paper. The fibrous material, made from a mulberry tree, disguises a bulb while softening its harsh glow. Noguchi produced numerous commercial lines of akari; dozens of models, in all shapes and sizes, are currently on view at the Noguchi Museum in Long Island City, Queens, as part of the show “Akari: Sculpture by Other Means.”
Noguchi made shades in various forms—globular, asymmetrical, geometric—and designed them to interact with lamp bases in differing ways. While some dangle from the ceiling, others balance on slim bamboo posts or sit on spindly legs, resembling small critters. The artist intended for akari to have a modular system, so consumers could match the shades with different bases and move them seamlessly from the table to the floor. They could also be suspended or mounted on a wall.
“When Noguchi was alive, akari was a living, breathing, changing thing,” said Dakin Hart, senior curator of the Noguchi Museum. “But when he died, all the innovation stopped.” Advertisement
Gradually, akari became increasingly codified, to the point where the Noguchi Museum—the official vendor of the art form—just sold the lamps as standard pairings of bases and shades that came in a box. “My hope in doing the show is to shake some artistry back into it,” Hart said. “Make it a little weird, mysterious, and more sculptural.”
Today, the electric paper lamp is a common lighting fixture, but Noguchi’s designs were unorthodox at the time. He originally conceived them in order to help reawaken the traditional Japanese paper lantern industry. In 1951, the artist traveled to Gifu in central Japan, which was the birthplace of the centuries-old craft. The city was struggling to survive in the wake of World War II, and Gifu’s mayor asked the sculptor to help revive this art form. Under Noguchi’s direction, the cheap paper balls—meant to be illuminated with a candle and sent floating down a river or up into the air—were transformed into sleek objects for the home. They were electrified and contemporized.
Perhaps unsurprisingly, major stores around the world, from Bloomingdales to Bonniers, quickly began to stock these modern consumer products. Regardless of this high demand, though, akari were—and still are—entirely handmade in a Gifu factory owned by Ozeki, a 127-year-old company. But they represented a whole new technology with clever engineering. Aside from having interchangeable parts, each akari is lightweight and collapsible, and therefore easy to ship, store, and install. They essentially act in many ways that sculpture traditionally does not. 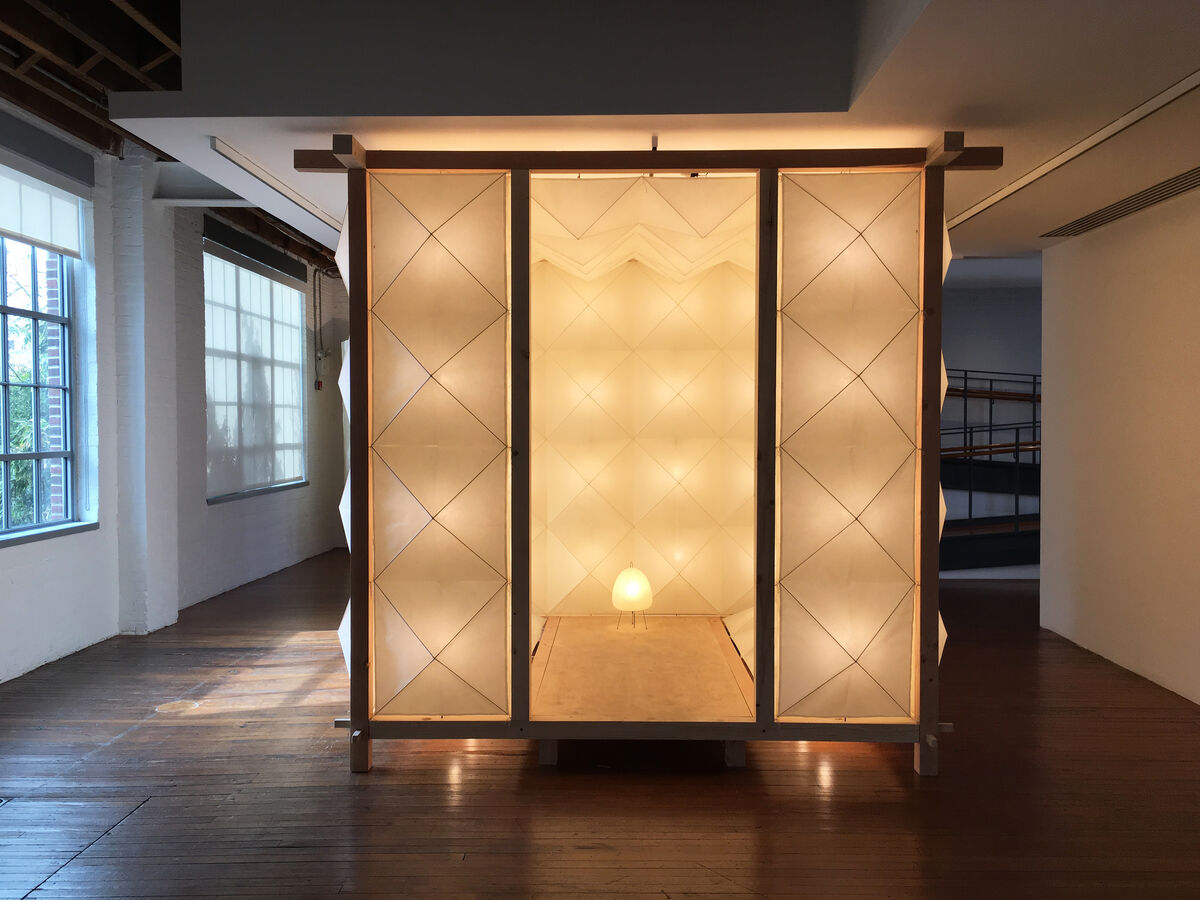 It should make sense, then, that a company such as IKEA, a champion of affordable convenience, would be attracted to akari and develop lamps that mimic Noguchi’s light sculptures. According to Hart, there is evidence that representatives of the megastore had approached Noguchi and asked to license his akari designs. The artist refused, but his designs, it seems, nevertheless inspired the likes of IKEA paper lamps such as HOLMÖ, REGOLIT, SOLLEFTEÅ, and so on, which have inevitably birthed their own copycats and DIY versions.
Although the beauty of akari stems from its simplicity, it was this minimal form that allowed people to copy Noguchi’s vision. The artist could not patent his shades, for they were too similar to the traditional Japanese lantern; however, he did patent every other part of akari he could, including his designs for bases and frames. A copy of one patent is on view at the Noguchi Museum as part of an archive that gathers magazine articles, advertisements, brochures, and other ephemera recording the success of akari over several decades. Part of why Noguchi kept inventing akari models was to stay ahead of the fakes. The exhibition features examples of rarer akari—artworks that immediately seem more sculptural than practical. One, his Akari (PL1) (c. 1965), is an 8-foot-tall lantern you can enter, consisting of four billowy sheets of washi paper that hang from the ceiling to form a small, glowing chamber. Another is a chapel-like room constructed from illuminated panels, known as Akari (PL2) (c. 1965). Then there is Akari (200D) (1985), Noguchi’s creation for his exhibition in the U.S. Pavilion at the 1986 Venice Biennale, which was titled “Isamu Noguchi: What is Sculpture?” A spherical akari that spans 2 meters in diameter, it appears to float, sun-like, in a giant wooden cuboid frame.
This trio of large-scale works exemplifies the dynamic potential of akari that Noguchi hoped to show. Transforming their environments, Noguchi was able to sculpt space by changing its meaning and our perception of it. The experience of smaller akari is similar, though more subtle; from whimsical table-top lamps to protuberant sconces, they emanate warm light that casts gentle and relaxing spells over the surroundings.
“These things are life-changers,” Hart said. “They shape our environments, but they also shape how we feel. Each is capable of creating that magic of what we think of as home.” That power, it seems, is one element that cannot quite be replicated.
Claire Voon
Related Stories