Why This North Carolina Town Is a Mecca for Ceramics Artists 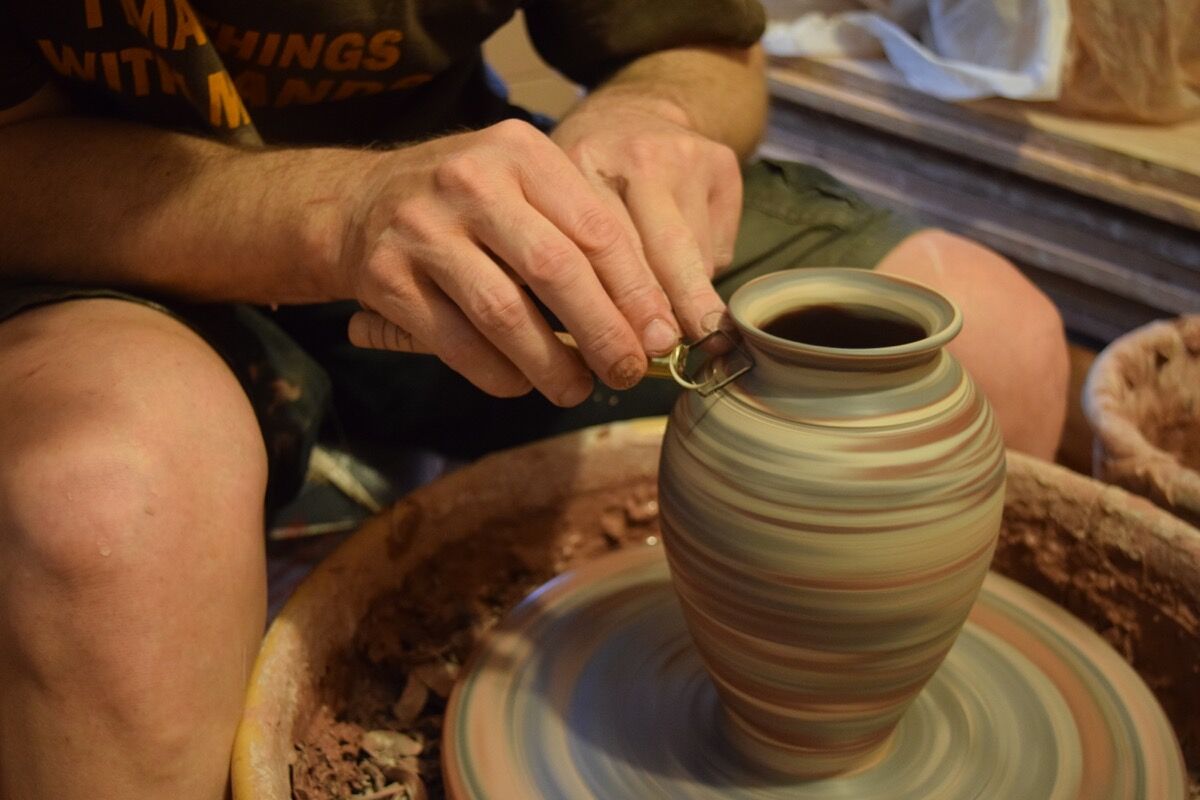 Eck McCanless at the pottery wheel. Photo by Richard Shoenberger.

Potter Kate Johnston creates a dynamic pitcher with a wide, plump belly; an elongated neck; and a curved, flower-like spout. It’s her own version of a classic pouring pot known as the Rebecca jug, and it illustrates her affinity for playing with proportions and aesthetics in her work—one of her favorite aspects of ceramics. Like many potters living among the rich ceramics traditions of Seagrove, North Carolina, Johnston has found that working there has driven her to take an innovative approach to the medium.
“After placing a work in historical context, I can ask my own questions of it, and have my own say at this point in time,” she reflects. And she’s in good company: The central North Carolina community hosts some 85 pottery studios in its 25-mile radius.
Her husband Daniel Johnston, a ceramics artist now focusing on fine art, is currently completing a permanent installation for the North Carolina Museum of Art in Raleigh. Through creating his large utilitarian urns among the skilled artists of Seagrove, he’s immersed in wood-firing techniques that are over 500 years old, having originated in Thailand and China. “Seagrove is comprised of a large group of potters working together in a small area that really pushes each other forward—and they do do that very quickly,” he observes. “There’s lots of stimulation and a lot of understanding.” 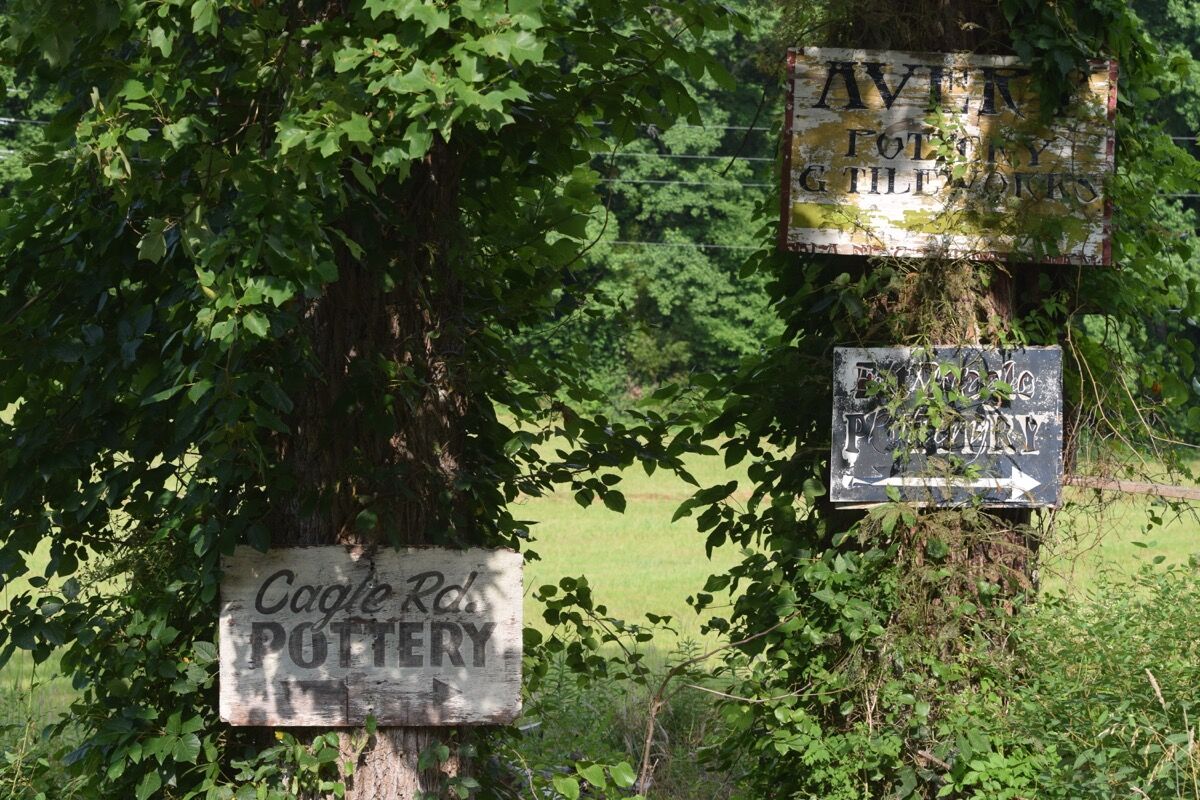 Designated in 2005 as the “State Birthplace of North Carolina Traditional Pottery,” Seagrove owes its deep ceramics roots, in part, to geology. The high hills and interaction with the coastal plain in the region “allows ash to settle in the water to create really good clays,” explains Lindsey Lambert, executive director of the North Carolina Pottery Center.
The clay’s origins trace back more than 500 million years, when tectonic shifts and volcanic activity formed the Uwharrie mountain range in central North Carolina (one of the oldest in North America). Molten rock just under the Earth’s surface in this part of the Piedmont plateau was densely packed and, over the course of millions of years, became igneous rock and then finer soil, abundant with feldspar minerals—calcium, alumina, silica, and sodium. During firings, silica hardens clay, while alumina slows the baking process to prevent cracking or breaking. And artists have been mining the material for centuries.
Early ceramic production in what is now central North Carolina was happening 300 years ago. The indigenous people of the Saponi, Keyauwee, and Siouan cultures were creating functional and ceremonial objects from redware clay. And in the 18th and 19th centuries, as the region became more accessible to European colonists—due to the the Great Wagon Road between Pennsylvania and Georgia, and a major train depot designed by engineer Edwin G. Seagroves—they, too, found that pottery could provide a vital source of income. 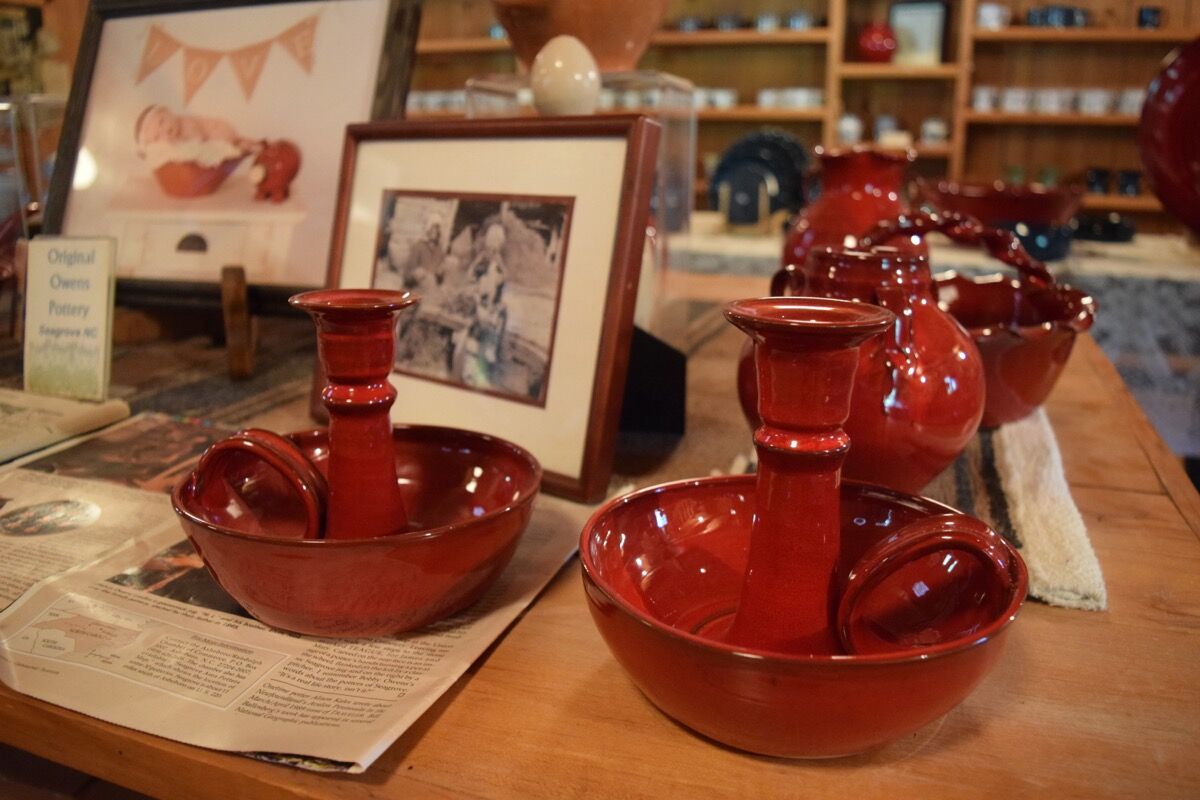 Advertisement
Settlers catered to a steady customer base using gray clay from creek beds and creating salt-glazed stoneware pieces. Pottery was also a necessity at the time, predating the industrial production of glass, metal, and plastic tableware, Lambert notes. Some of the oldest potteries in Seagrove today trace back to the late 19th and early 20th centuries.
Owens Pottery, established in 1895 and run by siblings Boyd and Nancy Owens, is the oldest pottery in the state of North Carolina; Jugtown Pottery was founded in 1917 by Jacques and Juliana Busbee, Raleigh artists who formed the business after tracking the origins of an orange pie dish they had received as a gift. The Busbees also opened The Village Store and Tea Room in 1917 in New York’s Greenwich Village, which was a vehicle for selling work from Seagrove potters and getting the word out about the creative community. Over the past century, the number of potteries in Seagrove has increased drastically.
Lambert credits the growth to the expansion of ceramics within academia, as well as the studio pottery movement after World War II, and a surge of interest in
folk art
in the early 1970s. In the wake of the Depression and Prohibition, long-standing potteries also evolved to develop more colorful glazes and decorative items. At present, the local population’s strong expertise in ceramics and the aesthetics of handmade objects continues to attract more contemporary artists to the area, Daniel Johnston notes. 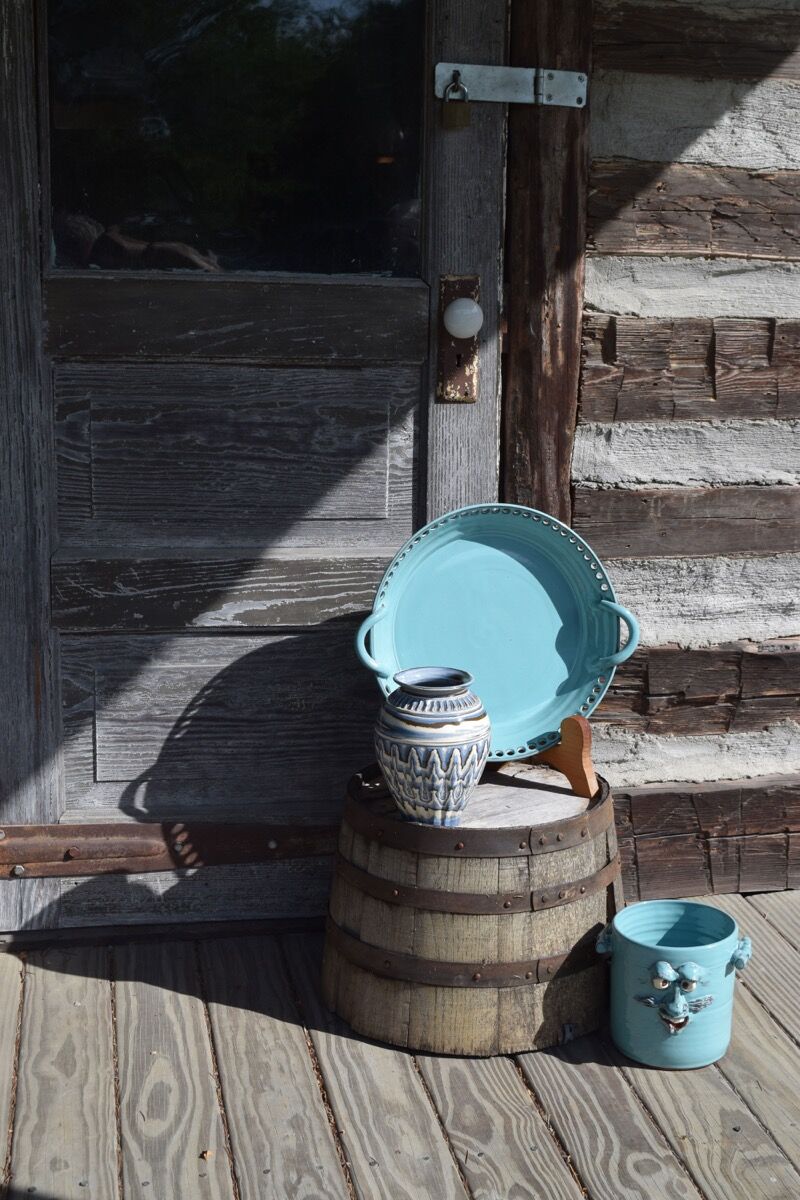 Work by Frank Neef. Courtesy of Heart of North Carolina.

Today, the general atmosphere among Seagrove potters is collegial, with artists driven to find their own path, explains artist Crystal King, who runs her own pottery. “Seeing each other’s work all the time is refreshing and inspiring, and it also raises the bar,” she says.
Each potter in town, King continues, tends to be known for something special—be it a certain type of work or technique, or for inventive materials. King is known during the autumn season for her wheel-thrown pumpkins with handcrafted stems and leaves; like many of her peers, she uses her own glaze recipes. Eck McCanless is renowned for agateware, which involves blending multiple colors of clay together to create swirls and spirals. Frank Neef makes crystalline-glazed porcelain pieces, inspired by pots from the Song Dynasty in China and the Koryo Dynasty in Korea. Takuro Shibata’s Studio Touya is known for creating traditional Japanese ash glazes. And Jennie Keatts (of JLK Jewelry) creates jewelry inlaid with hand-painted stones, using glazes developed by Pamela Owens of Jugtown Pottery.
There are a few ways a newcomer might begin exploring Seagrove. Kate Johnston recommends going to the North Carolina Pottery Center for some grounding in historical forms and picking up a map there, or heading to the North Carolina Visitors Bureau at the visitors’ centers off of I–74/I–73 (the northbound side visitors’ center has a great display and map of local potteries). Though doing some research is your best bet for finding the specific kind of work you’re interested in, she also advises calling studios that are not open daily ahead of time, as many welcome interested parties. 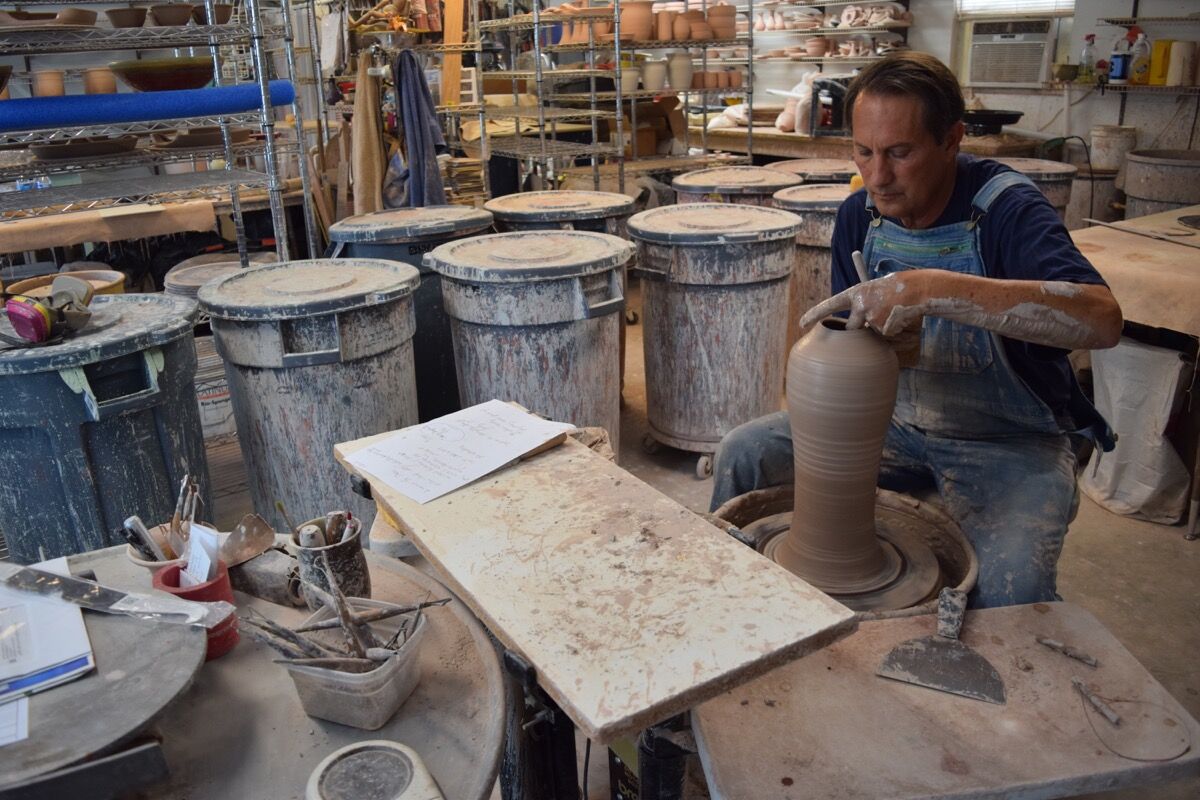 At the one stoplight in Seagrove, visitors find Seagrove Pottery Gallery, which showcases more than 100 local and regional potters. Nearby, the Seagrove Stoneware Inn doubles as both a bed and breakfast and the pottery studio of Alexa Modderno and David Fernandez—the latter of whom is also the city’s current mayor.
The weekend before Thanksgiving, the Museum of North Carolina Traditional Pottery will host the 37th Seagrove Pottery Festival, while the Seagrove Area Potters Association will host the annual Celebration of Seagrove Potters—both of which offer abundant opportunities to get to know local potters and their work. Other annual events include kiln openings in mid-April, Christmas in July, and open studios in honor of American Craft Week in October.
Ultimately, Daniel Johnston observed, “the public is responsible for having kept this going. Without the hundreds of thousands that purchase—without a lot of people buying a lot of work—the community would not continue to thrive.” He described long-standing customers who have collected enough pottery to use handmade dishes during every meal, and remarked that customers “are owed a great deal of respect for having maintained that.”
Amy Beth Wright