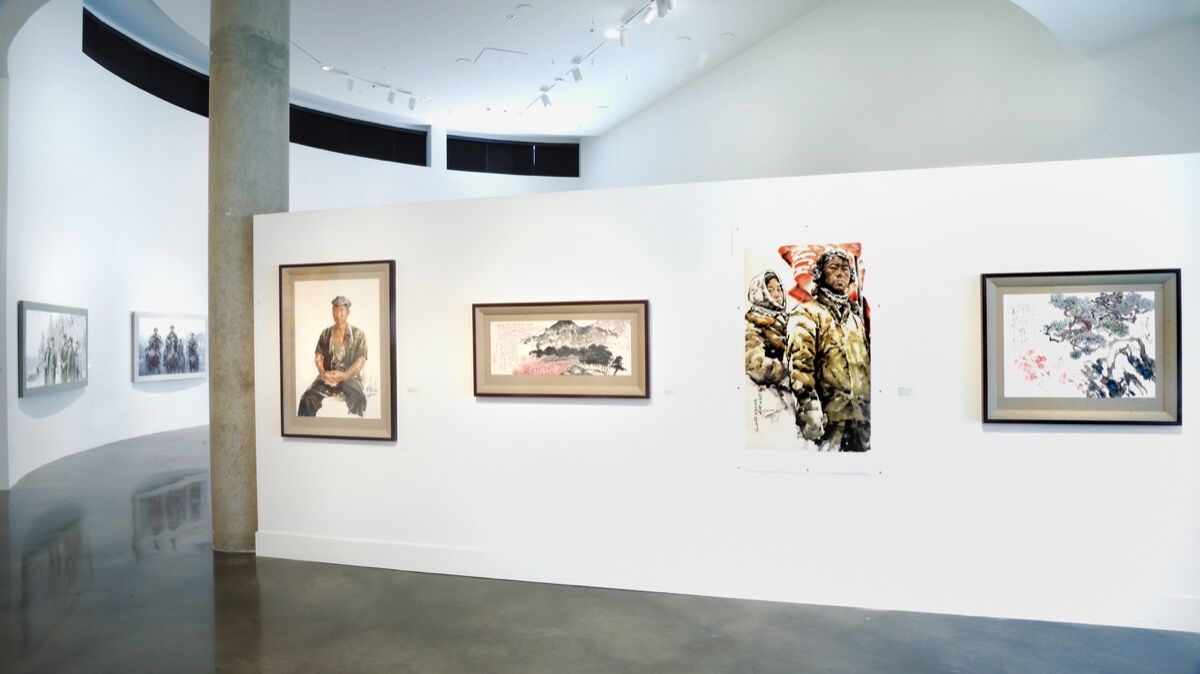 “Art is really huge in North Korea,” B.G. Muhn tells me over the phone from D.C. His statement is as emphatic as it is surprising. A South Korean-born artist who is now a professor at Georgetown, Muhn visited the DPRK to study its art nine times over the past five years. What he found inspired him to curate a recent show of contemporary art from the DPRK at the American University Museum in Washington, D.C. The unprecedented result, “Contemporary North Korean Art: The Evolution of Socialist Realism” introduced 60 paintings by contemporary North Korean artists to previously unexposed U.S. audiences.
Visiting with artists and art professionals at some of North Korea’s most prominent studios and institutions (located primarily in Pyongyang), Muhn found himself drawn to a particular type of painting. “I discovered quickly their unique art form chosonhwa, which literally means ‘Korean painting,’ a traditional ink wash painting on rice paper,” Muhn explains. Unmistakably
socialist realist
in style, the genre has changed little in subject matter and technique since the founding of the DPRK in 1948, due to North Korea’s status as a pariah state.
“I became quite curious about how, over the past seven decades North Koreans have developed chosonhwa as the country’s most refined art form, and the primary vehicle for their ideological painting,” says Muhn. Many would cast off these works as mere propaganda. And indeed their visions of strong leaders, heroic soldiers, and contented citizens greatly resemble the socialist realism of the Soviet Union. But Muhn is out to convince audiences that there’s much more at play.

As one might expect, securing the paintings for the show was no easy task. The North Korean government refused to lend support. While officials that Muhn spoke to were pleased with the idea, he says they were unconvinced that U.S. audiences would appreciate the work or even allow for the exhibition to take place. Muhn found an ally, however, in Pyongyang’s Choson National Museum of Art. An anonymous Beijing collector of North Korean art also provided support; he owns many chosonhwa works and has connections to the Mansudae Art Studio, a prominent art production center in the North Korean capital where some 1,000 professional artists are employed. The studio also has an arm in Beijing, including a museum.
Professional artists in North Korea who work in studios like Mansudae have to undergo extensive schooling. The program at Pyongyang University of Fine Arts (Pyongyang Art College), one of the country’s most prestigious art academies, requires a minimum six- to eight-year commitment. After graduating, artists achieve “First Degree” and can begin working in a studio. It’s much like any other job, with set hours and a quota on the number of paintings each artist is required to produce per month. These paintings are then submitted in local and national exhibitions, and sold to collectors in China and Europe.
More prominent and successful artists can progress from First Degree on to greater distinctions. “If you practice and achieve quite a lot, entering national art competitions and producing good work, then you’ll become a Merit Artist,” says Muhn. He adds that artists who continue to gain fame thereafter, over another six to 10 years, can earn the title of People’s Artist. Artists have also been known to win the Kim Il-sung Prize and achieve the title of Hero of Labor, and the highest honor, Double Hero of Labor. “There are only two that have that title in their history of art,” says the curator.
There are relatively strict thematic instructions that chosonhwa painters must follow when creating their works. “But it’s not that simple,” says Muhn. “Like artists everywhere, they also want to express something different from fellow artists. Even though they’re depicting the same subject matter, most come up with very different expressions as a result.” Much of this comes down to besting others’ technique: creating more dynamic compositions, mastering subtleties of light and dark, or finding the best way to create a sense of distance, for example. More recently, Muhn says, “Artists have been dealing with personal and everyday life scenes, portraying friends and family members.”
Chosonhwa painters are undoubtedly heavily influenced by their country’s isolation and autocratic regime in maintaining conformity with prescribed styles. “Their society has been closed off the last 70 years and most of the people don’t have much exposure to the outside world or other audiences,” explains Muhn. He says that artists “learn art history in college and are well aware of abstract art and other forms of expression we do here in the West, but they think it is not the proper or most perfect form to express their own art.” 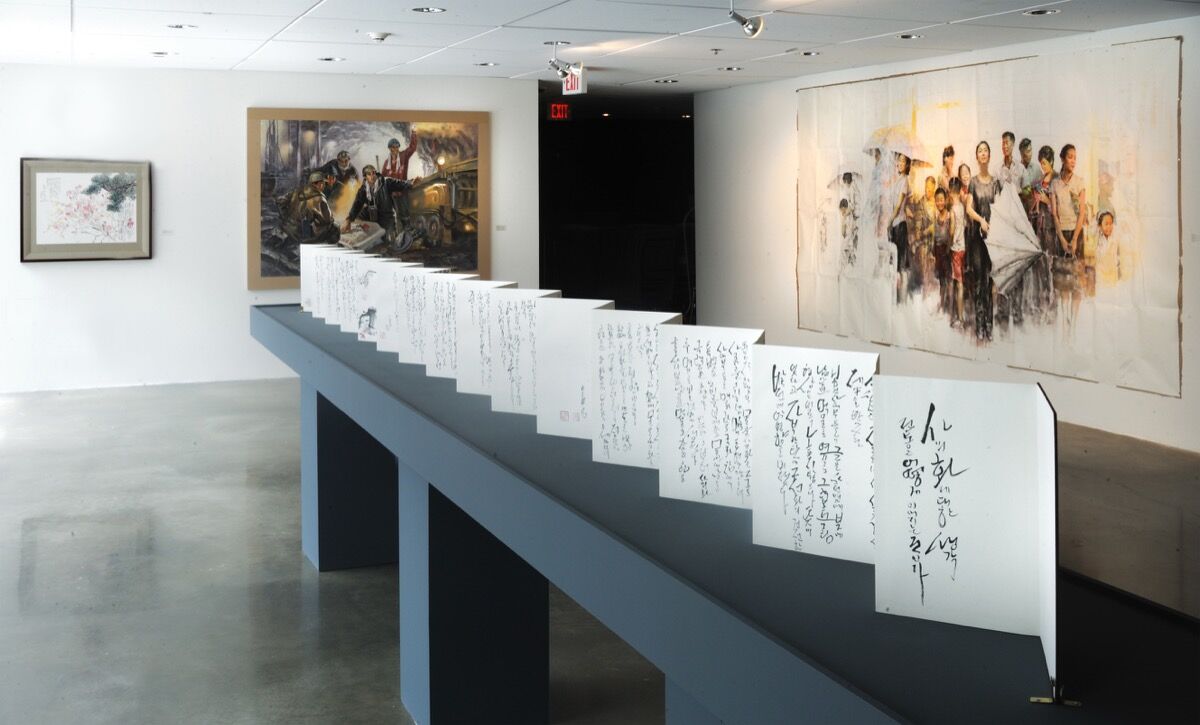 Advertisement
Unlike other international strains of socialist realism, chosonhwa is free from symbolism and allegory. The paintings are meant for the everyday person to understand through looking alone. “Artists in North Korea believe that art is meant to serve the people. Most ordinary people don’t understand abstract art. The same is true here in the West, but they are just exposed to it so many times, they become accustomed to it,” Muhn contends. “Over there, it’s more severe because most people have never seen Abstract Expressionism or other avant garde or cutting-edge art before, so what they really feel close to in their life is what they understand.”
Beyond chosonhwa, other artforms play a central role in society. As Muhn emphasizes, “There’s not just propaganda but also murals in the streets, decorative flower paintings that people put in their homes, theological paintings to encourage spirituality.” He notes that when national art exhibitions are held, a large swathe of society will attend, from families to soldiers, and he estimates that most people walking down the street would be familiar with some of the nation’s most famous artists, like Jong Yong Man.
While Muhn concedes that chosonhwa paintings “don’t reflect reality,” he sees them as a window into North Korean culture. They reflect “the country’s pride,” he says. “It’s for people to be encouraged to work even though they are exposed to hardships. It is what they believe is true.” To many in the West, that might be as clear a definition of a propagandistic, state-dictated control apparatus as there gets. But to Muhn, much in the same way New Yorker Jeff Koons might celebrate capitalism with shiny balloon dogs, North Korea’s artists “just want to reflect on what they see.”
Casey Lesser is Artsy’s Lead Editor, Contemporary Art and Creativity.