The Not-So-Subtle Sexual Innuendo in Classical, Renaissance, and Baroque Art 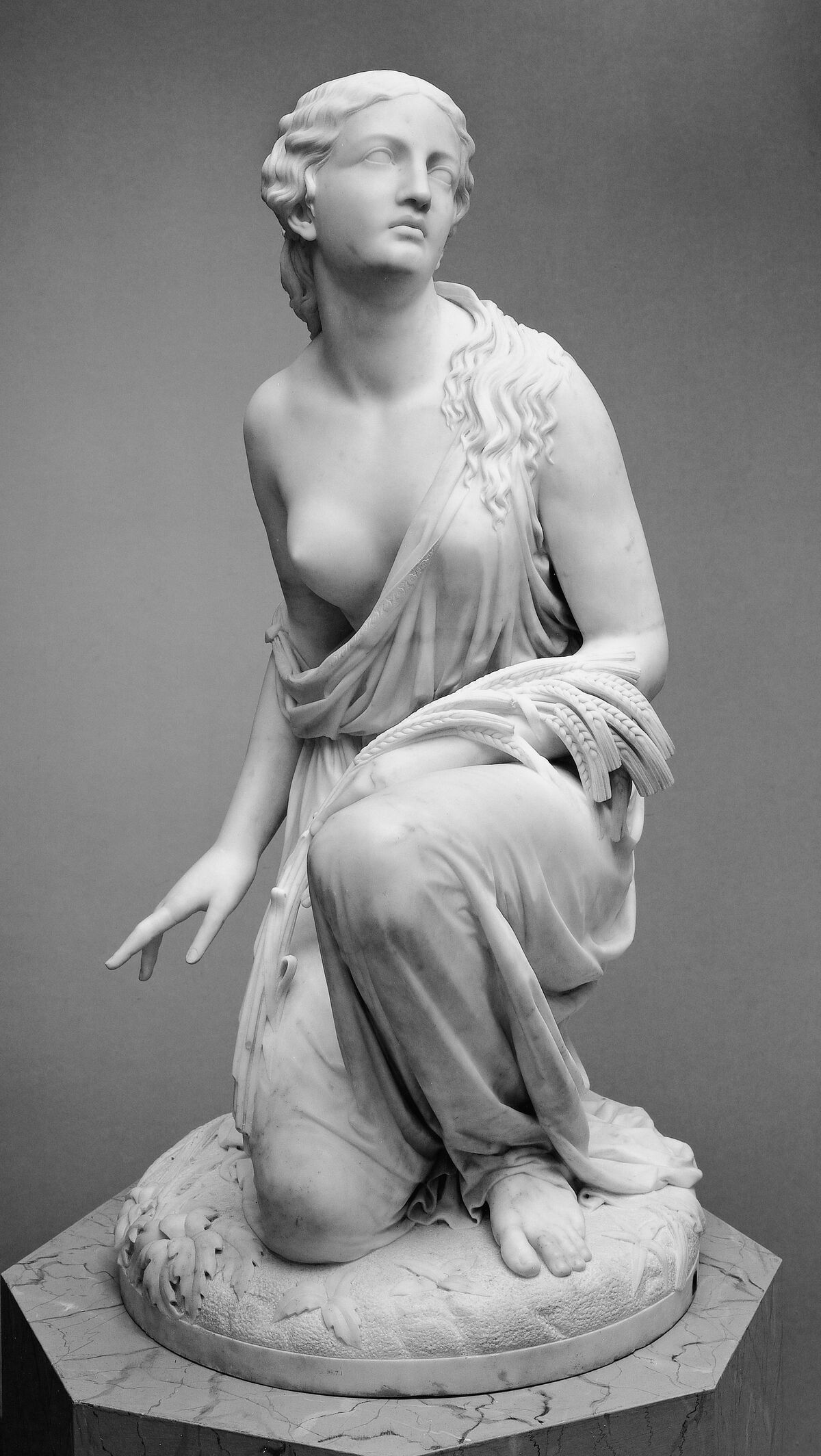 “This would be an example of unnecessary nudity. Today, we’d call it a nip slip.”
Andrew Lear, a scholar who specializes in the history of sexuality in art and leads a tour at the Metropolitan Museum of Art called “Scandalous Secrets,” is looking at a marble sculpture. The stone form, carved by the popular late-19th century sculptor
Randolph Rogers
, depicts Nydia, a blind heroine in the 1834 novel The Last Days of Pompeii. In his interpretation of Nydia, Rogers captures her blindness, her youth, and her bravery. He also disrobes her, offering viewers an uninterrupted view of her right breast.
In The Last Days of Pompeii, Nydia isn’t described as nude. So why did Rogers choose to include this unsupported detail in his sculpture? According to Lear, the artist’s logic was likely straightforward: “to titillate his audience.” 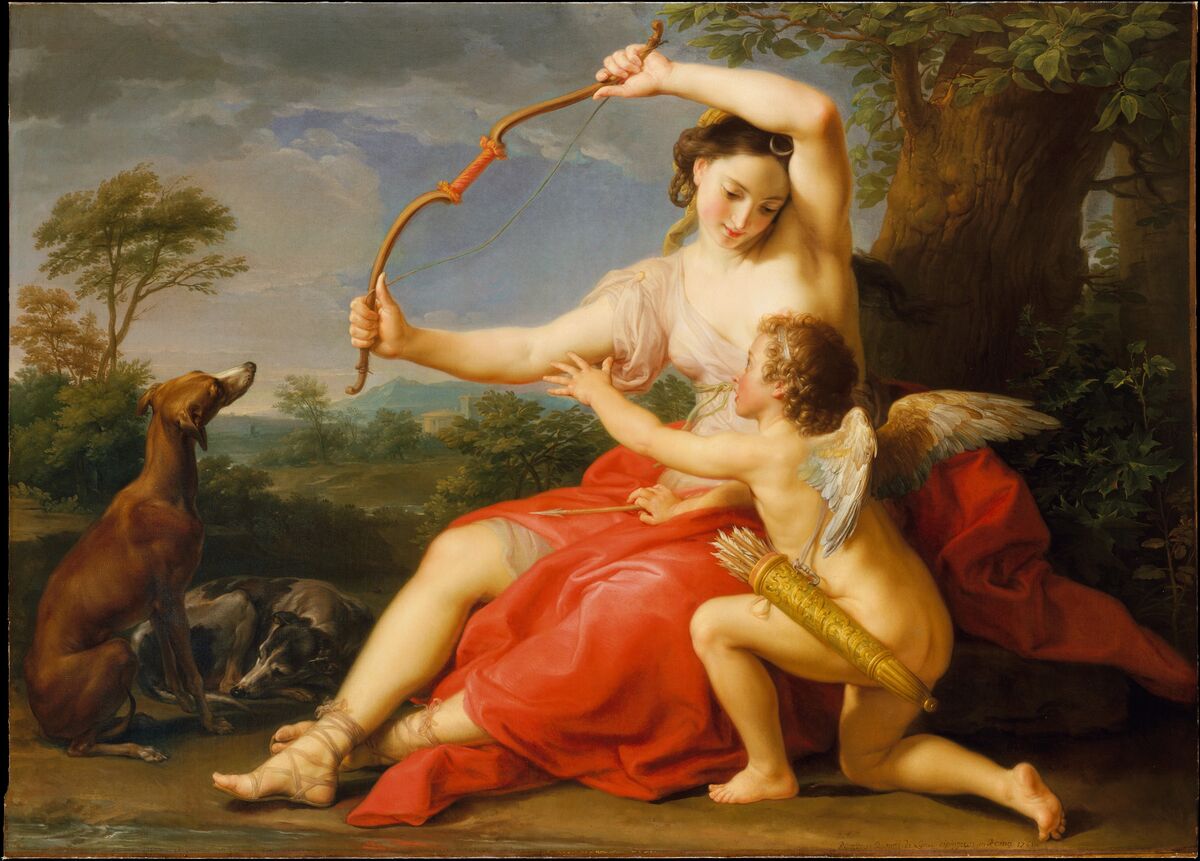 Pompeo Batoni, Diana and Cupid, 1761. Courtesy of the Metropolitan Museum of Art. Caravaggio, The Musicians, 1597. Courtesy of the Metropolitan Museum of Art. 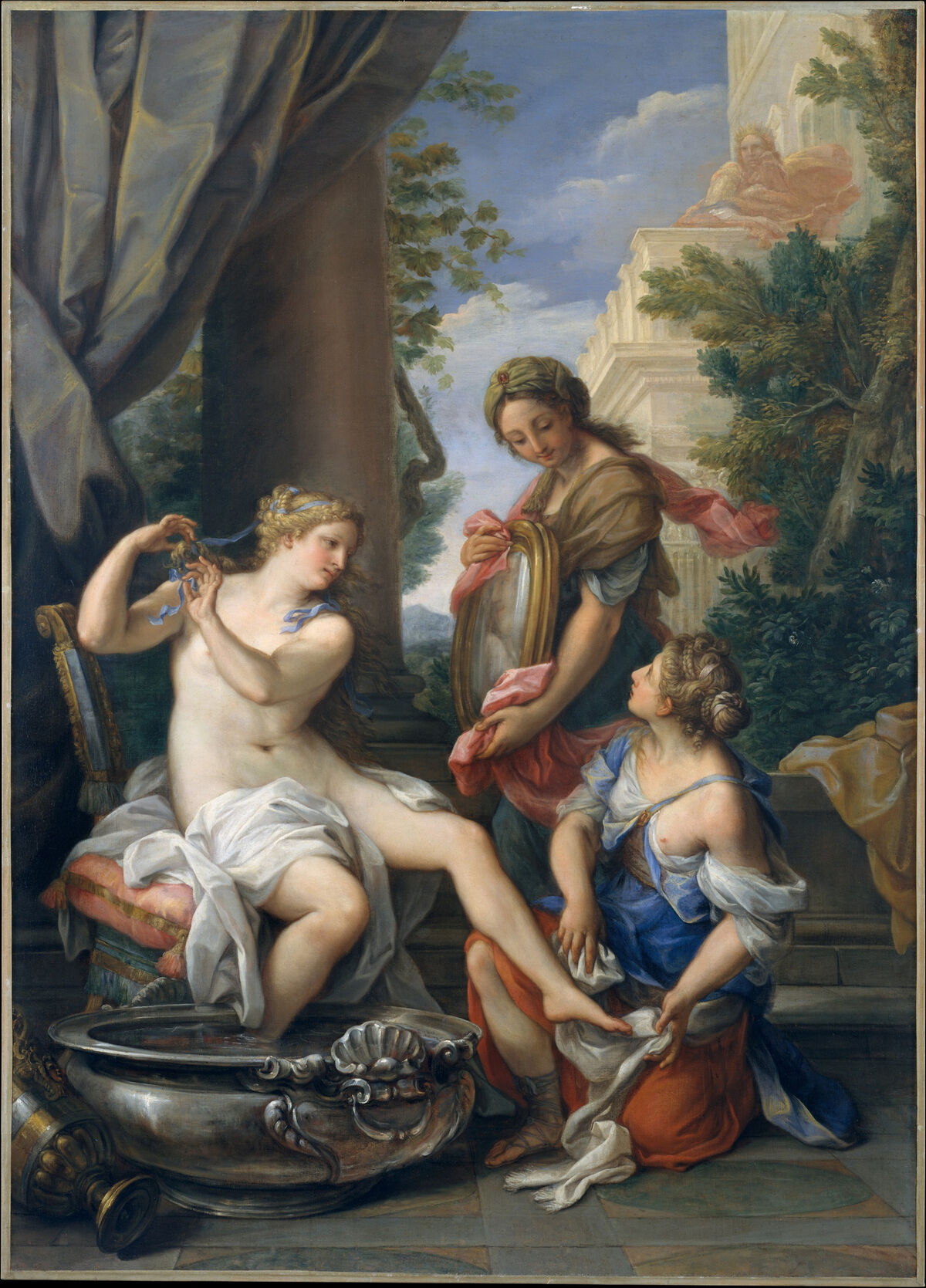 Giuseppe Bartolomeo Chiari, Bathsheba at Her Bath, ca. 1700. Courtesy of the Metropolitan Museum of Art.

Advertisement
Several centuries later, Italian artists from the
Baroque
period who shared an affinity for classical themes would embed their work with unabashedly carnal details. Bernini, whose 17th-century practice was funded primarily by the Catholic Church, visualized a passionate, lustful pursuit in his sculpture depicting the Greek gods Apollo and Daphne. The marble form depicts Apollo grasping at Daphne desirously, as their two tense bodies arch upward in unison. They are both almost completely in the buff, save for bits of cloth and bark covering their genitals.
In the late 1500s, Caravaggio also borrowed classical motifs with provocative results. In his 1597 painting The Musicians, he depicts a group of four young boys in classical Grecian-style robes that hang suggestively off their bodies. The central figure stares directly out at the audience with a distinctly come hither look. “Everyone in the Renaissance knew what men did to boys in the ancient world, Caravaggio included,” Lear says, referring to the Ancient Greek practice of pederasty, in which adult males took adolescent male lovers.
In addition to camouflaging sex with mythology and classical imagery, artists have also used Biblical themes. Bernini’s Ecstasy of Saint Teresa (1647-52) is perhaps the most renowned (and blatant) example. As inspiration, Bernini clearly took a cue from Teresa’s own writings about her divine encounter with an angel, who pierced her with an arrow: “The sweetness caused by this intense pain is so extreme that one can not possibly wish it to cease, nor is one’s soul content with anything but God. This is not a physical, but a spiritual pain, though the body has some share in it—even a considerable share.” 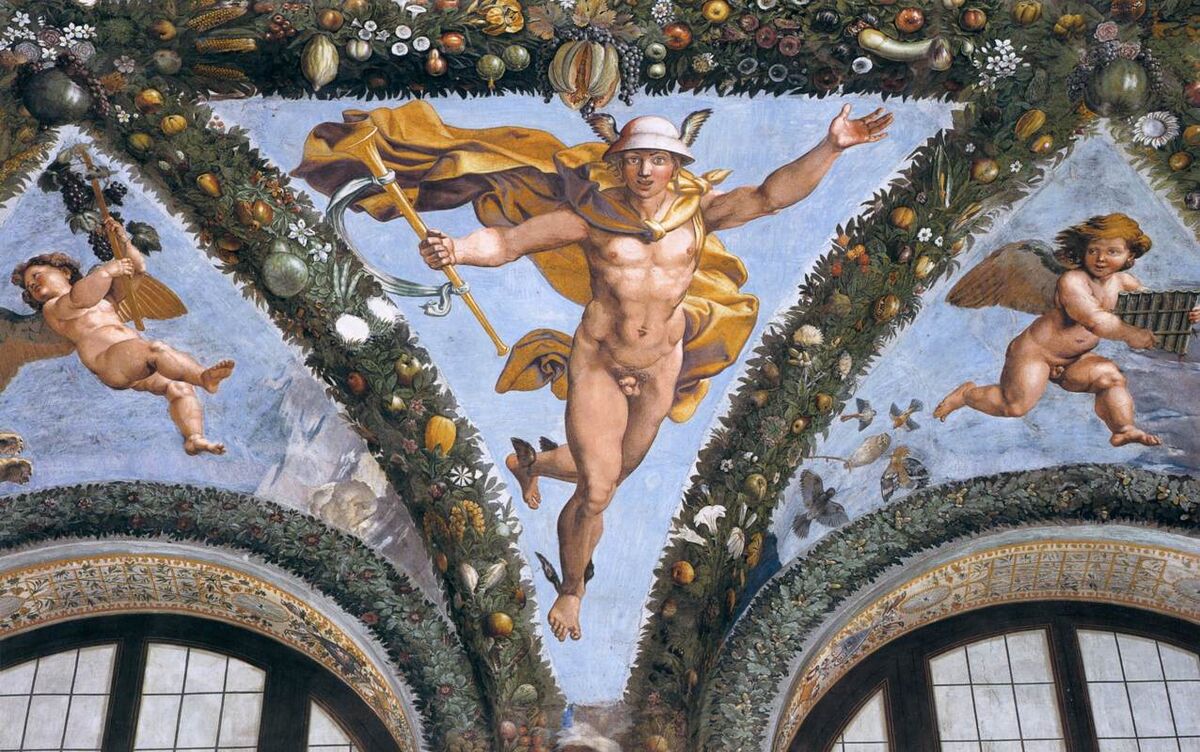 Bernini’s Teresa leans back euphorically and opens her mouth as an angel lifts her robes and points an arrow towards not her heart, but her loins.
Similarly, in around 1700, Giuseppe Bartolomeo Chiari used the biblical story of Bathsheba as a means to paint not one but two womens’ bare breasts—one belongs to Bathsheba, the other to her maid whose gown falls off her shoulder as she washes her lady’s foot.
Other allusions to desire are concealed in the objects that decorate narrative scenes. Renaissance painter
Raphael
doesn’t sexualize his depiction of Mercury in his Villa Farnesina fresco, for instance. (The god wears a goofy smile and his penis is flaccid.) Rather, he charges the bouquet of fruit that Mercury points to with sexual symbolism. The decorative garlands that separate each figure were painted by Raphael’s contemporary Giovanni da Udine.
The garland closest to Mercury’s hand cradles a fig so swollen that its juices are erupting. Next to it is a gourd that can only be described as large and turgid.
Giorgio Vasari, the biographer of many Italian Renaissance artists, would later allude to this metaphor: “Above the flying figure of Mercury, he fashioned a Priapus from a gourd and two eggplants for testicles … while nearby he painted a cluster of large figs, one of which, overripe and bursting open, is penetrated by the gourd.” Jan Steen, Merry Company on a Terrace, ca. 1670. Courtesy of the Metropolitan Museum of Art. 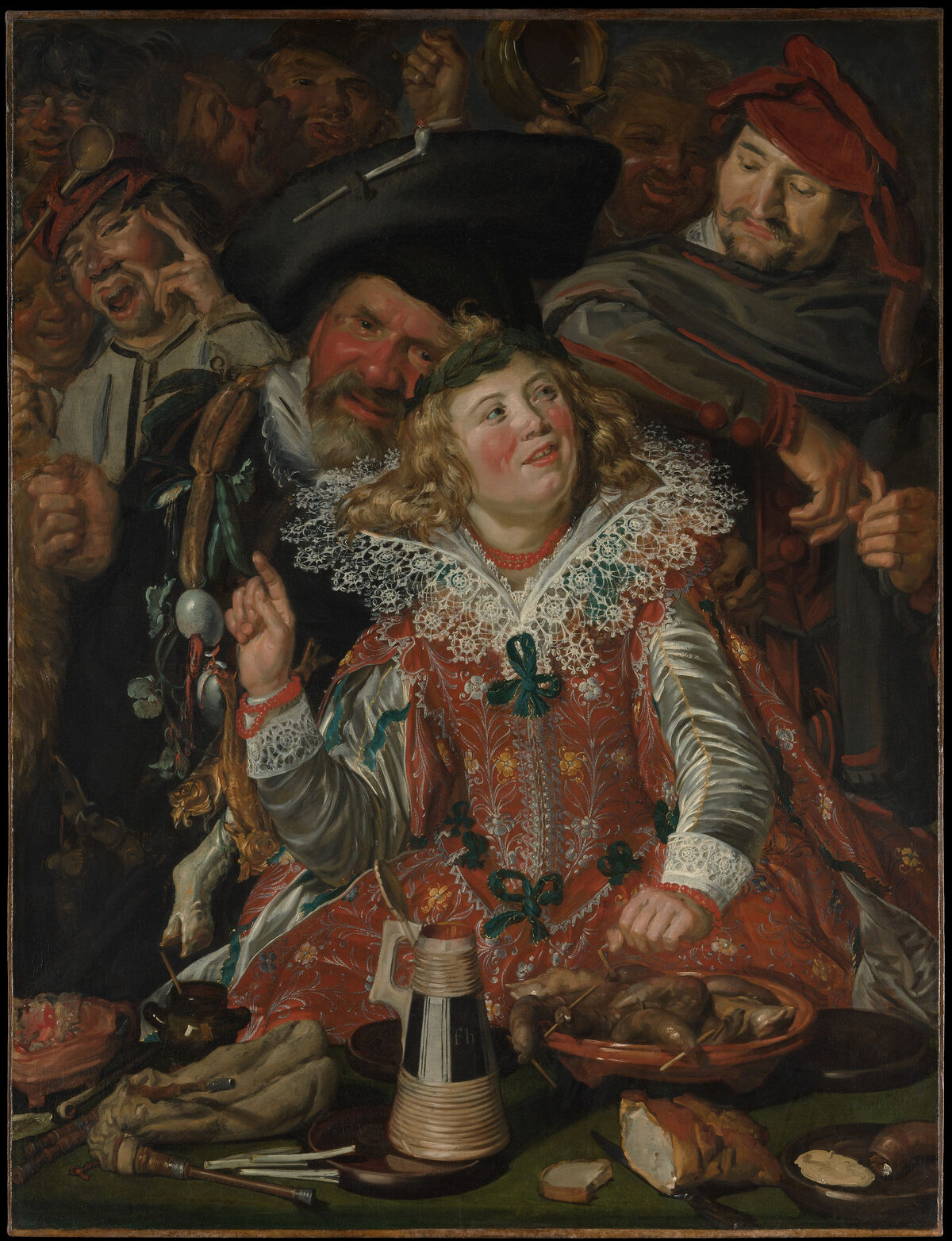 Frans Hals, Merrymakers at Shrovetide, ca. 1616-17. Courtesy of the Metropolitan Museum of Art.

Artists working in the Netherlands of the 1600s also had an appetite for humorous sexual symbolism. In Merry Company on a Terrace (ca. 1670),
Jan Steen
paints a rowdy party scene, and sets a fair maiden at the center. Her neckline, which already plunges deeply to reveal no small amount of cleavage, is embellished with just-plucked roses, suggesting virginity—but also a certain willingness to leave the chaste life behind. At her feet, a pitcher has toppled over, with its lid propped suggestively open. Next to her, a young man sits with a lute in his lap. It’s tilted upward, echoing the male organ that it covers.
Frans Hals
’s Merrymakers at Shrovetide (ca. 1616-17) is similarly full of symbolic winks. The scene shows a group of male revelers surrounded by what looks like a young woman in fancy dress. But a closer look at the central figure reveals an Adam’s apple. The lady, it turns out, is in fact a young man—and the objects surrounding her drive the point home. The table is covered in a plate of sausages, an older man dangles a garland strung with more wurst and broken eggs (a symbol of lost virginity), while another man looks at the youth seductively and makes a lewd gesture.
While the 16th- and 17th-century moral codes imposed by religion and cultural tradition prohibited overly titillating imagery, these artists—and many more—imbued accepted subjects with subtle (and sometimes not so subtle) sexual coding, rather than blindly comply. In doing so, they wedged timeless and universal human desires related to sexuality, and all manner of sexual preferences, into mainstream art of their time.
Alexxa Gotthardt
Related Stories