A Court Case in Oakland Could Radically Affect Public Art Across the U.S. 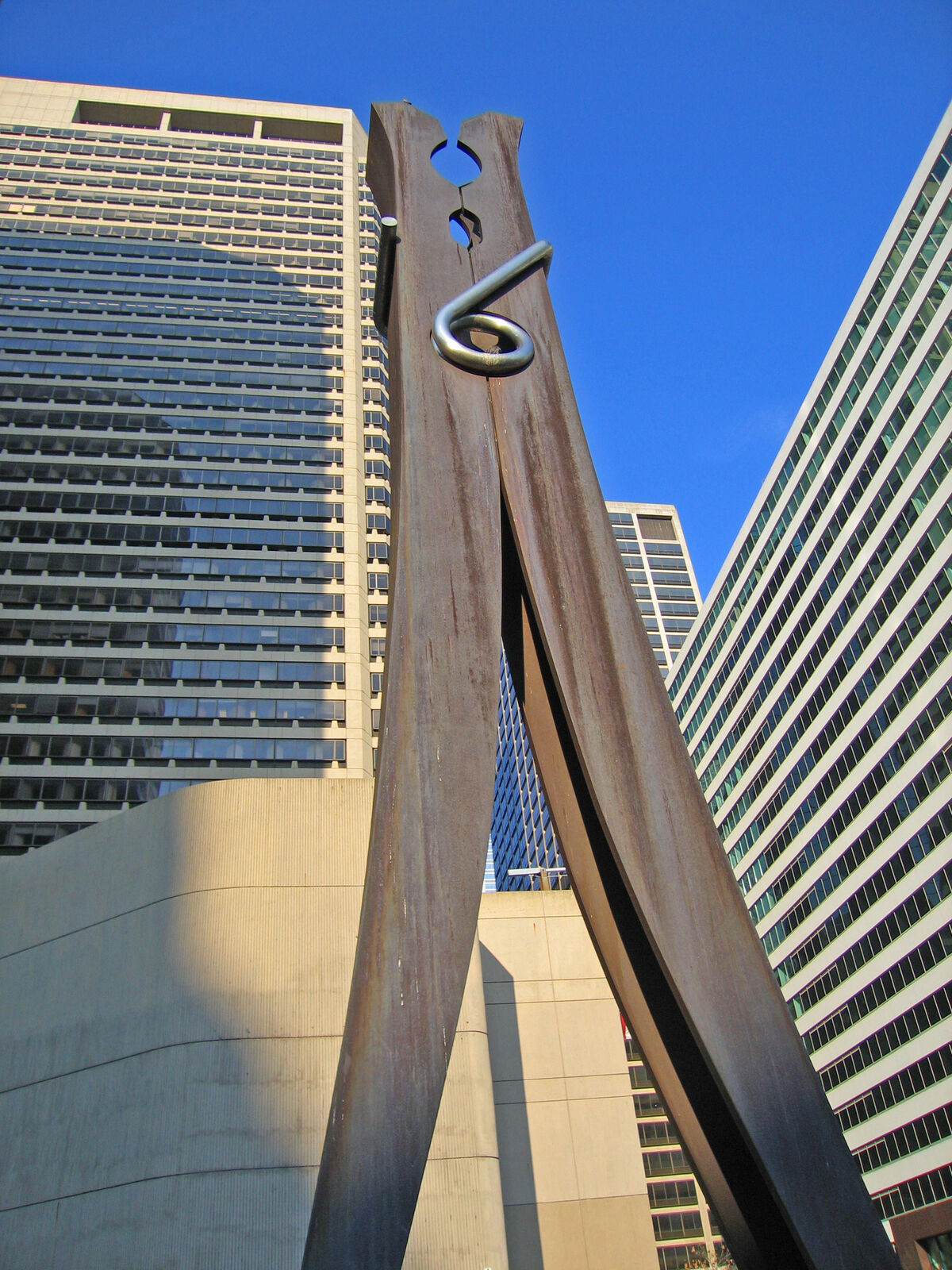 Claes Oldenburg’s Clothespin (1976) was created through Philadelphia's Percent for Art program, the oldest in the U.S. Photo: John Vosburgh via Flickr

Under Oakland’s ordinance, the lawsuit says, the city won’t issue them a building permit unless they either devote up to 1% of construction costs to public art on their property or contribute to the city’s public art fund. The Building Industry Association of the Bay Area, which filed the lawsuit in California’s federal court on July 23, says that requiring private developers to fund public art is the kind of “taking” of property without compensation that is forbidden by the Fifth Amendment. The suit also alleges that because art is expression, requiring developers to install or finance public art is forcing them to engage in government-sponsored speech, which is forbidden by the First Amendment. “The government can’t force you to engage in artistic expression,” says the association’s lawyer, Anthony François of the Pacific Legal Foundation.

The trade group’s argument is based on a U.S. Supreme Court case, Koontz vs. St. Johns River Water Management District, decided in 2013. In the case, the court restricted the government’s ability to exact money from developers before issuing a building permit, determining that in order to be constitutional there had to be a connection between the impact of a development and what the money would be used for. “The question is, can [Oakland] show commercial development causes an impact that requires it to be mitigated through art?” says Paul Beard, who won the Koontz case while working at the Pacific Legal Foundation and is now at Alston & Bird. “It’s dangerous to ask public art to be a band-aid,” says Jack Becker, founder and executive director of Forecast Public Art in St. Paul, Minnesota, which consults with municipalities to develop plans for public art.

The case could have an impact well beyond Oakland because its law “is not terribly different” from Percent for Art laws in other municipalities.

From Oakland’s point of view, this isn’t a constitutional issue at all. “The city’s not requiring a specific message, and if they don’t want to put up art they can make a donation,” says Oakland senior deputy city attorney Arlene Rosen. “Municipalities are authorized to regulate land use,” she says, and the California Supreme Court, in a 1996 case (Ehrlich v. City of Culver City), said that “aesthetic conditions [a city imposes on developers] have long been held to be valid.” Is there, then, a conflict between the U.S. Supreme Court and California’s highest court? “It’s so early in the case, I don’t know what’s going to happen,” Rosen says. “I think they’re on pretty shaky ground, but we’ll have to see what the court says.” The case could have an impact well beyond Oakland because its law “is not terribly different” from Percent for Art laws in other municipalities, says François. Beard agrees: “There’s no question that more lawsuits will be filed.”
The overwhelming majority of Percent for Art programs are limited to public building projects financed with public funds, says Becker. New York City, for example, has commissioned nearly 400 artworks by renowned artists for schools (including one by
Vito Acconci
), police precincts (
Alice Aycock
), courthouses (
Cai Guo-Qiang
), and other public buildings since the city’s Percent for Art law was enacted in 1982, says a spokesman for the city’s Department of Cultural Affairs. The Oakland suit won’t affect these programs because they’re financed with public funds.

“Private developers are a critical funding stream [for public art], especially where there’s growth and a lot of development.”


But Percent for Art programs in other important art centers could be vulnerable. The majority of public art in Philadelphia—which has the oldest Percent for Art law, enacted in 1959—is funded by commercial developers, including
Claes Oldenburg
’s Clothespin (1976), says Julia Guerrero, Philadelphia’s Percent for Art director. And in San Francisco substantial funding comes from private developers, according to Jill Manton, director of the city’s Public Art Trust. For non-residential projects with 1,500-3,000 square feet of outdoor space accessible to the public, San Francisco’s law requires a minimum of $500,000 put aside for art on the site and a whopping $750,000 for those with 3,000 square feet or more. The city’s downtown is now dotted with art by the likes of
Anish Kapoor
and
Ugo Rondinone
.

“Private developers are a critical funding stream [for public art], especially where there’s growth and a lot of development,” says Becker. But laws making their participation mandatory can also backfire because of the added cost, he warns: “Percent for Art might scare developers off when cities are begging them to come in.” Beard points to a larger issue of arts funding. “The question is not whether public art should exist but who should be paying for it. Taxpayers, including developers, should fund it. The Constitution is designed to prevent selecting one group to bear the cost.”