How to Be More Observant and Engaged as a Street Photographer 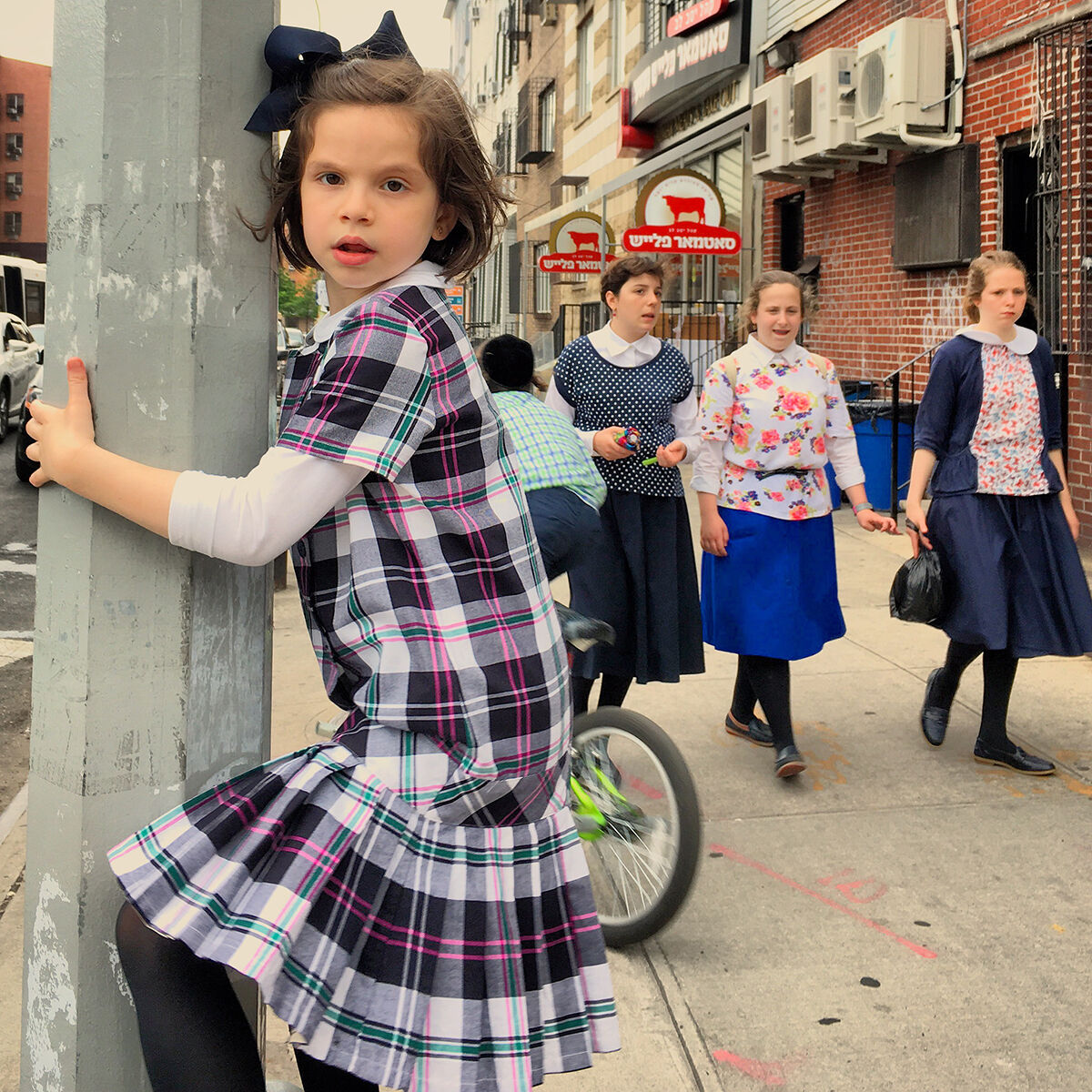 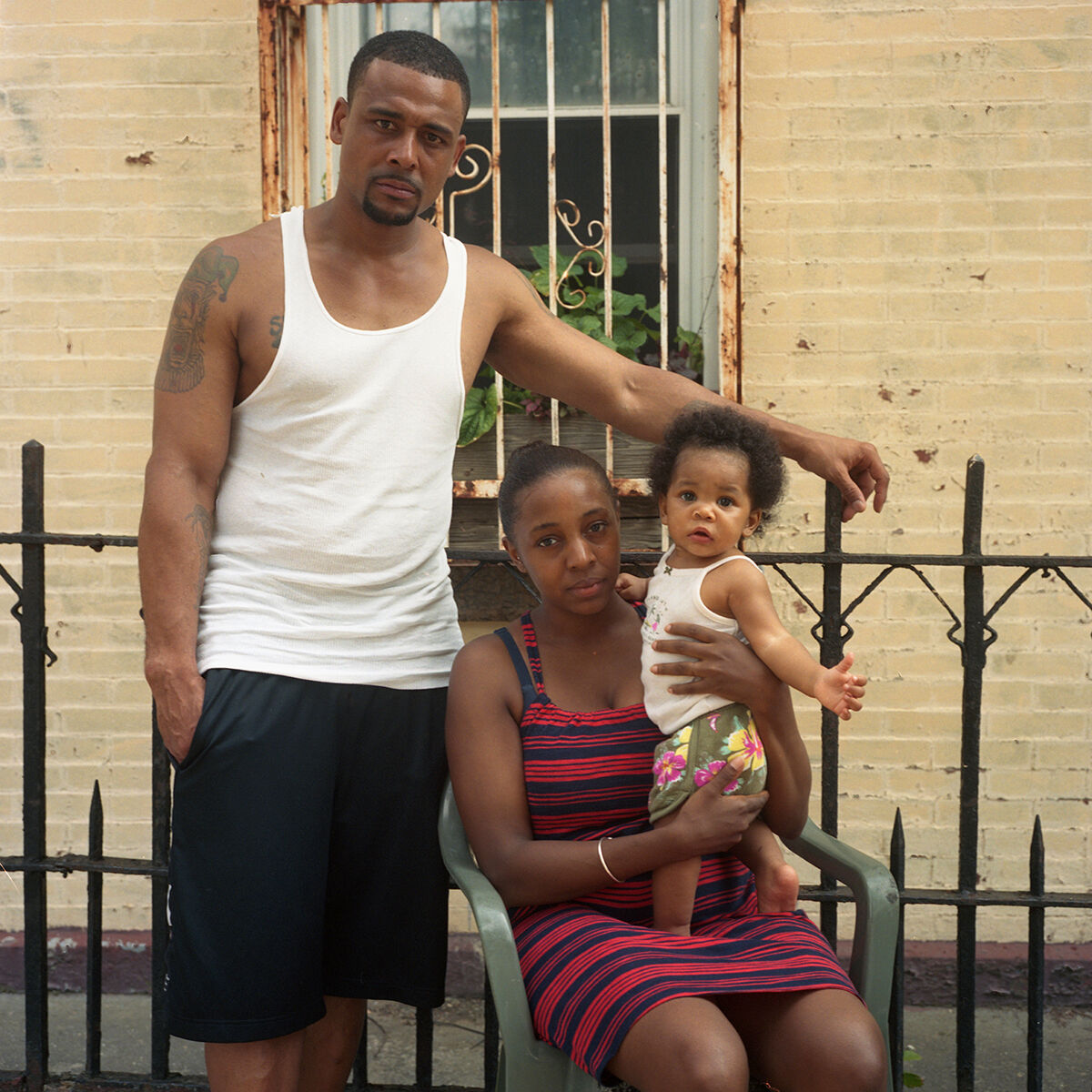 Amy Touchette, from “Family Album,” Bed-Stuy, Brooklyn. Courtesy of the artist and ClampArt.

When photographer
Amy Touchette
walks down the streets of Bedford-Stuyvesant, Brooklyn, she’s armed with either her Rolleiflex camera or her iPhone. “I use the Rolleiflex to make posed street portraits, where I introduce myself and talk to people,” she explained via email. With her phone, she takes candid snaps, “where we usually don’t exchange a word.”
Touchette has taken street photos around her home city, as well as in Mexico, Italy, Vietnam, Japan, and the American South, among many other places; they’ve been published by the New York Times, the New York Observer, and BuzzFeed. She enjoys both the “slow, deliberate experience” of shooting with the medium-format Rolleiflex, which only has 12 frames per roll, as well as the “cavalier” abandon of shooting with a camera phone. Touchette’s film images make up several bodies of work, including “The Young Series,” portraits of teenagers in New York City, O’ahu, Hawaii, and Tokyo, which will be on view at Purdue University from February 18th to March 22nd. Meanwhile, her mobile images are part of an ongoing Instagram series, “Street Dailies,” which she began in 2012 around New York City, and which highlights the universality of the human experience.
Street photography
, Touchette asserted, can be like a form of therapy. “Dwelling on what connects us, or just entering someone else’s story in the way that photography allows, forces you to get out of your own head,” she offered. “It’s a way of creating order out of chaos.”
Touchette also shares her nearly two decades’ worth of experience with burgeoning photographers through workshops. Street photography is a unique genre, she stressed, because it’s less about photographic skill and more about how one sees the world and experiences it. “[It’s about being] more open to change and accepting of what you didn’t expect; to be inquisitive and engaged with life,” she mused. A street photographer is not just a passive observer, but an active participant in the shoot. “A sculptor adds water to clay to make it more malleable. A painter adds linseed oil to paint to make it move across the canvas more smoothly. What does the street photographer add to make photographing easier? They add themselves,” Touchette wrote. “Like
Eve Arnold
famously said, ‘It’s the photographer, not the camera, that’s the instrument.’”
Below, Touchette shares 11 tips on how to improve your street photography skills. 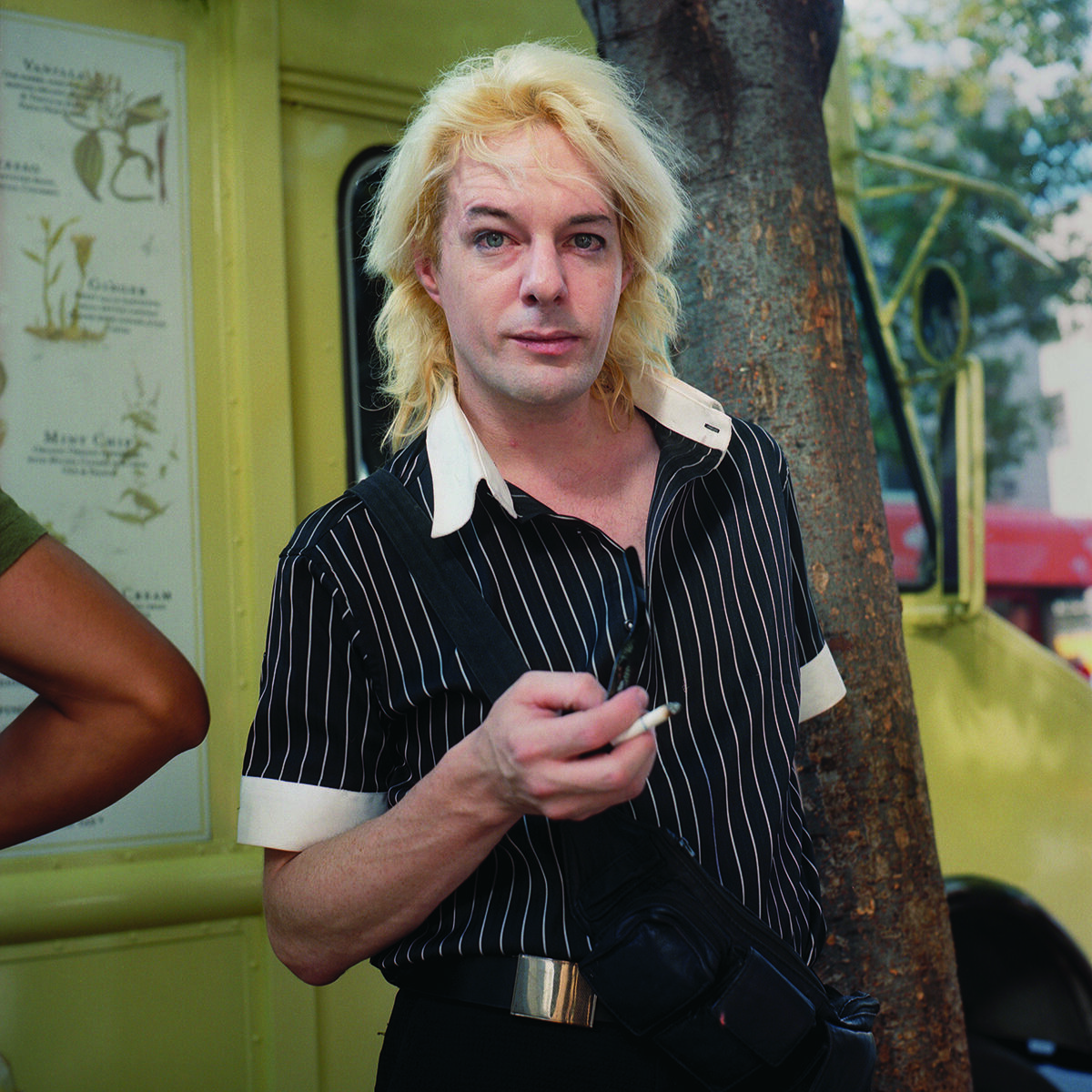 Amy Touchette, from “The Insiders.” Courtesy of the artist and ClampArt.

To form a rapport with the people you’re photographing, “help them become familiar with you,” Touchette instructed. “Last summer, I photographed at the same time every day. I walked the same exact route every time I went out, and I even wore the same clothes.” She made direct eye contact and offered friendly smiles, hoping to open the door for conversation. “In a neighborhood like Bed-Stuy, which is naturally friendly, you’re going to start making a lot of friends that way,” she said. “Not only do you get more portraits, it feels so nice to meet the world.”

Keep calm, and your subjects will, too

Give people physical and mental space

Coming on too strong can make your potential subjects uncomfortable, so be friendly and respectful of people’s personal space. “You want people to feel they have room to make up their own mind about you,” Touchette noted. “If people feel like you respect their boundaries, and it’s possible for them to say no when they need to, it becomes much easier for them to say yes.” She added that you can convey that ease through your words or your body language, depending on the situation. 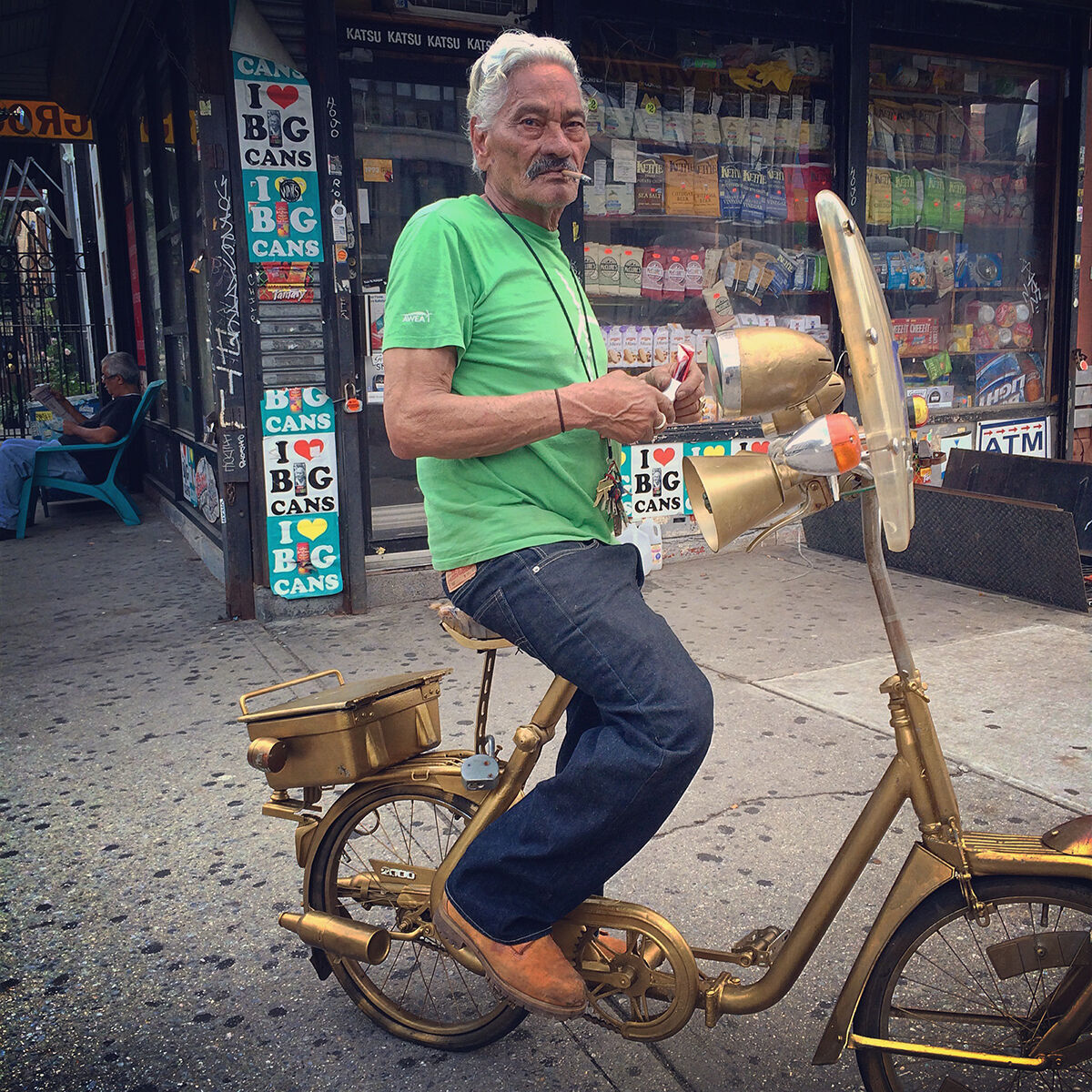 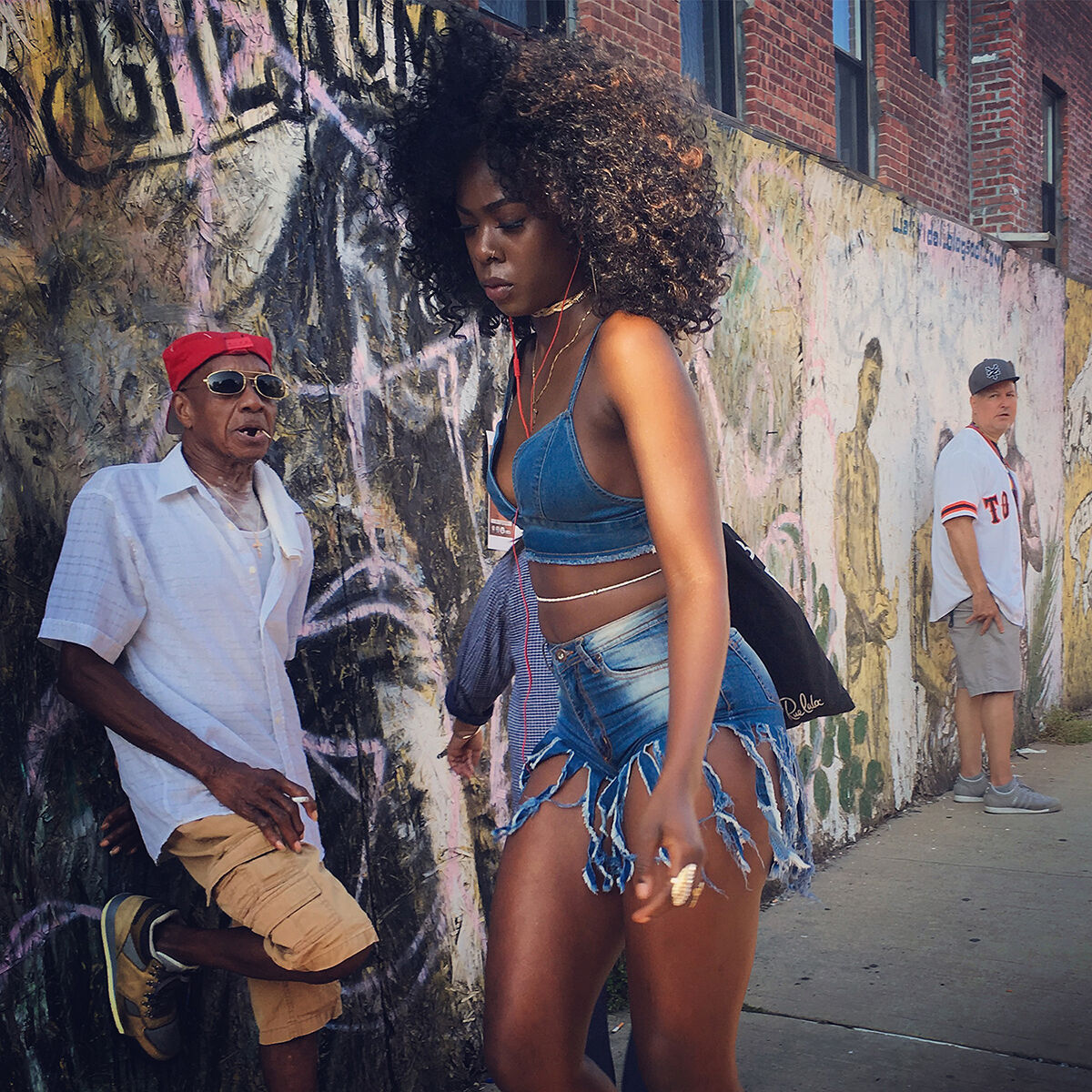 Advertisement
If you’re using manual focus, you don’t want to miss the shot while you’re adjusting your lens, so Touchette advises practicing working at different distances beforehand. “When you’re at home, focus on objects at various lengths, then check your lens to see how many feet away [your subject] is,” she suggested. “Once you get a feel for it, test yourself and make a guess at the distance before confirming it on your lens. When you go out, set your aperture as high as possible, giving you the greatest depth of field, and focus on an object in that range. Then go about on your walk and only photograph people who are within that range.”

Learn from the greats, but find your own way 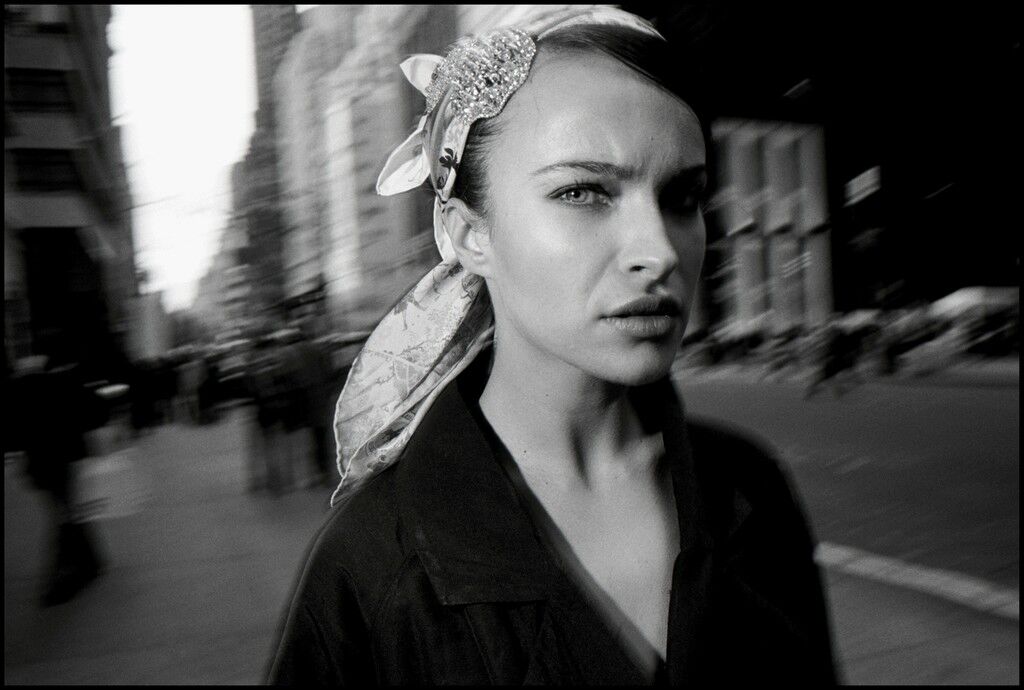 Bruce Gilden
New York City. USA. , 2006
Magnum Photos
It can be helpful to study the processes of great street photographers to learn what worked for them, Touchette explained, but ultimately, you should develop an approach of your own. “
Diane Arbus
used to fumble with her equipment to distract her sitters.
Bruce Gilden
jumps in front of people’s faces.
Mary Ellen Mark
used to walk around without a camera until she made relationships within the community she wanted to photograph,” Touchette outlined. “Try out the methods that interest you, and then decide what works best for you. Everyone’s way is unique.”

Answer “Did you just take my picture?” truthfully

Not everyone who asks this question will be upset, so don’t become defensive, Touchette explained. “Begin with honest flattery by saying ‘yes,’ smiling warmly, and explaining in just a few words why you were interested in photographing them: they looked peaceful, the light is nice, their dog is adorable—whatever the truth may be,” she offered. “Sometimes when people ask this question, they’re just curious.…If you [get defensive], it’ll look like you have done something wrong, and that will start the conversation down the wrong path.”

Trick yourself into photographing 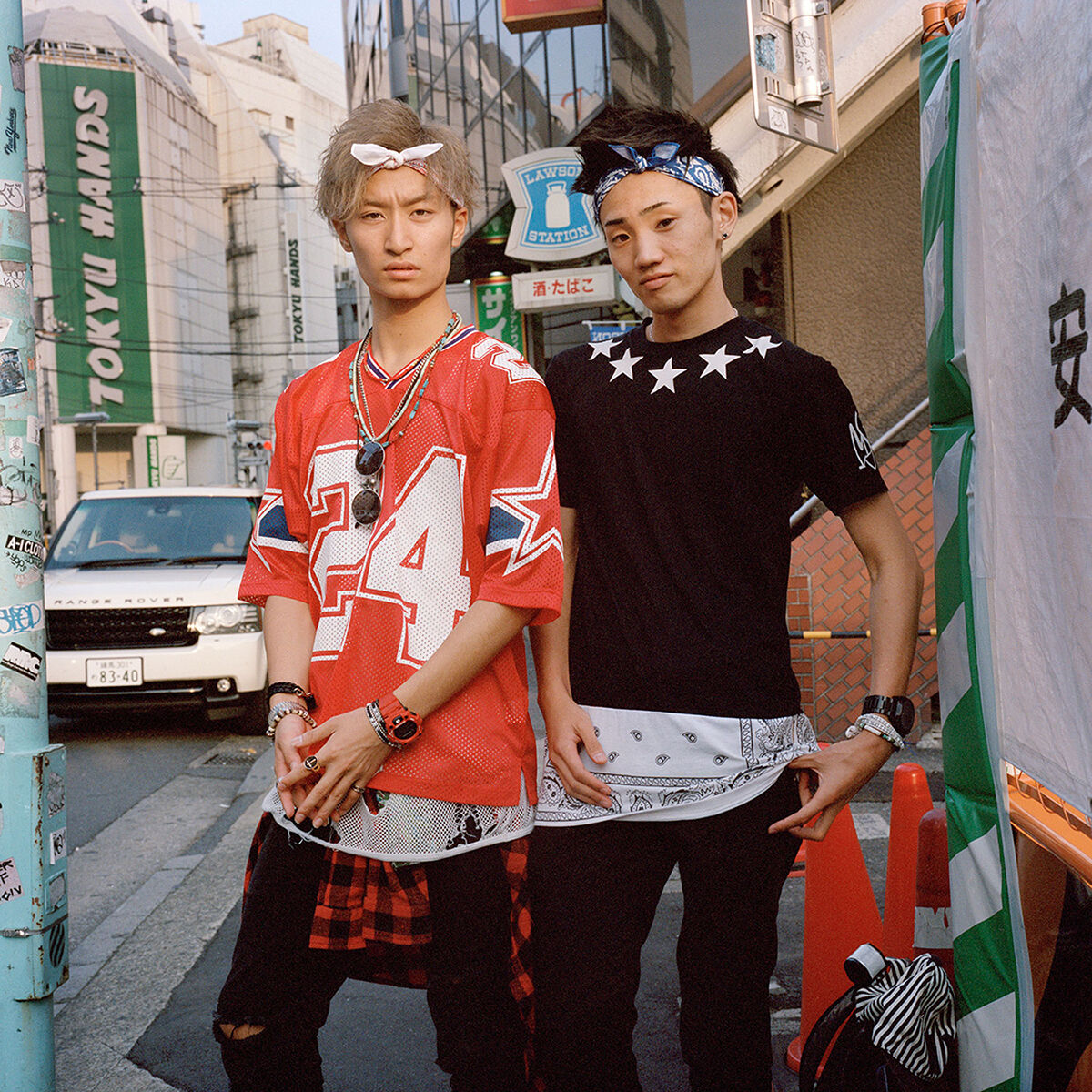 Amy Touchette, from “The Young Series,” Tokyo. Courtesy of the artist and ClampArt.

You’re not always going to feel the spark of inspiration, and that will make it harder to keep up with your habitual walks. “Whenever I resist going out, I always tell myself that I don’t have to make any portraits, I just have to walk outside,” Touchette wrote. “Before long, I see someone I’m dying to photograph, and that feeling of fear and intense desire wells up, and I can’t help but try to photograph them. Then it’s business as usual again.”

“Fear can be a sign of inspiration, insecurity, or danger,” Touchette explained. “My fear has never gone away on the street, but you don’t want it to, because it tells you what you need to know to move forward.” She suggested: “Figure out whether you are feeling fear because you care so much about the outcome (inspiration), you are deciding to doubt yourself (insecurity), or you’re being foolish by putting yourself in harm’s way (danger). Then just do the right thing. Either get to work, stop sabotaging yourself…or get out of there smartly and quickly.”

End the day on a good note Amy Touchette, from “The Young Series,” New York. Courtesy of the artist and ClampArt. 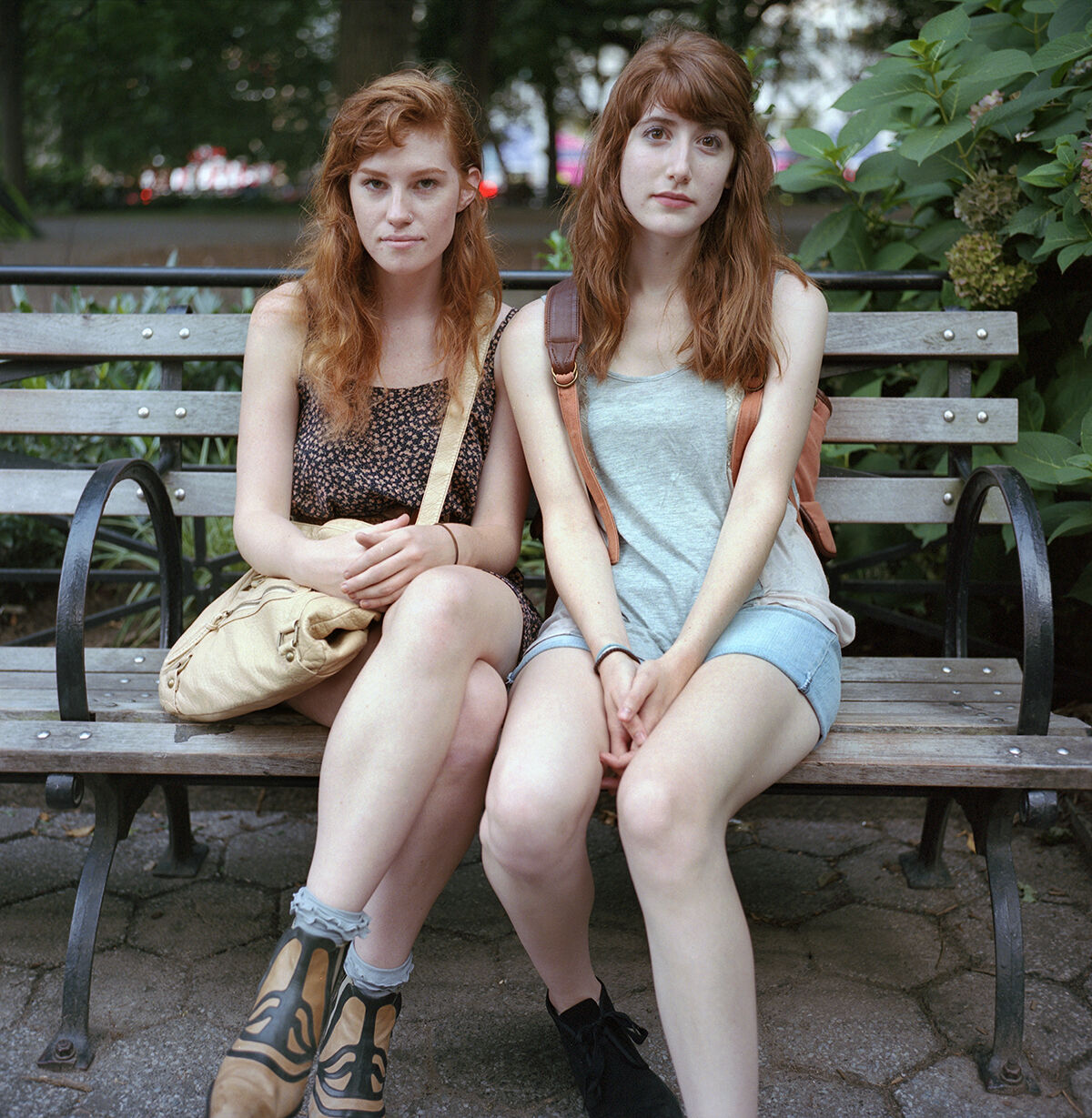 Amy Touchette, from “Us.”Courtesy of the artist and ClampArt.

Not all of your encounters will be good ones, but what’s important is how you handle it. “When you experience something on the street that’s particularly painful, maybe a bad interaction, walk it out until your emotions have leveled,” Touchette suggested. “Enjoy the scenery, get a coffee, take some deep breaths. But then continue photographing. If you don’t and just call it a day, it’ll make it all the more difficult to get yourself out the door the next day.”

Believe in what you are doing

Confidence, like with most things in life, is half the battle. “So long as you carry yourself as someone who believes in what you are doing and who thinks street photography is valuable and worthwhile, you can convey a sense of trust to many people quite quickly without saying a word,” Touchette wrote. “And it works the other way around, too. If you think photographing someone without their permission is wrong, people will sense that and also think you’re doing something wrong. What’s in the mind is reflected in the body.”
Jacqui Palumbo is a contributing writer for Artsy Editorial.
Related Stories