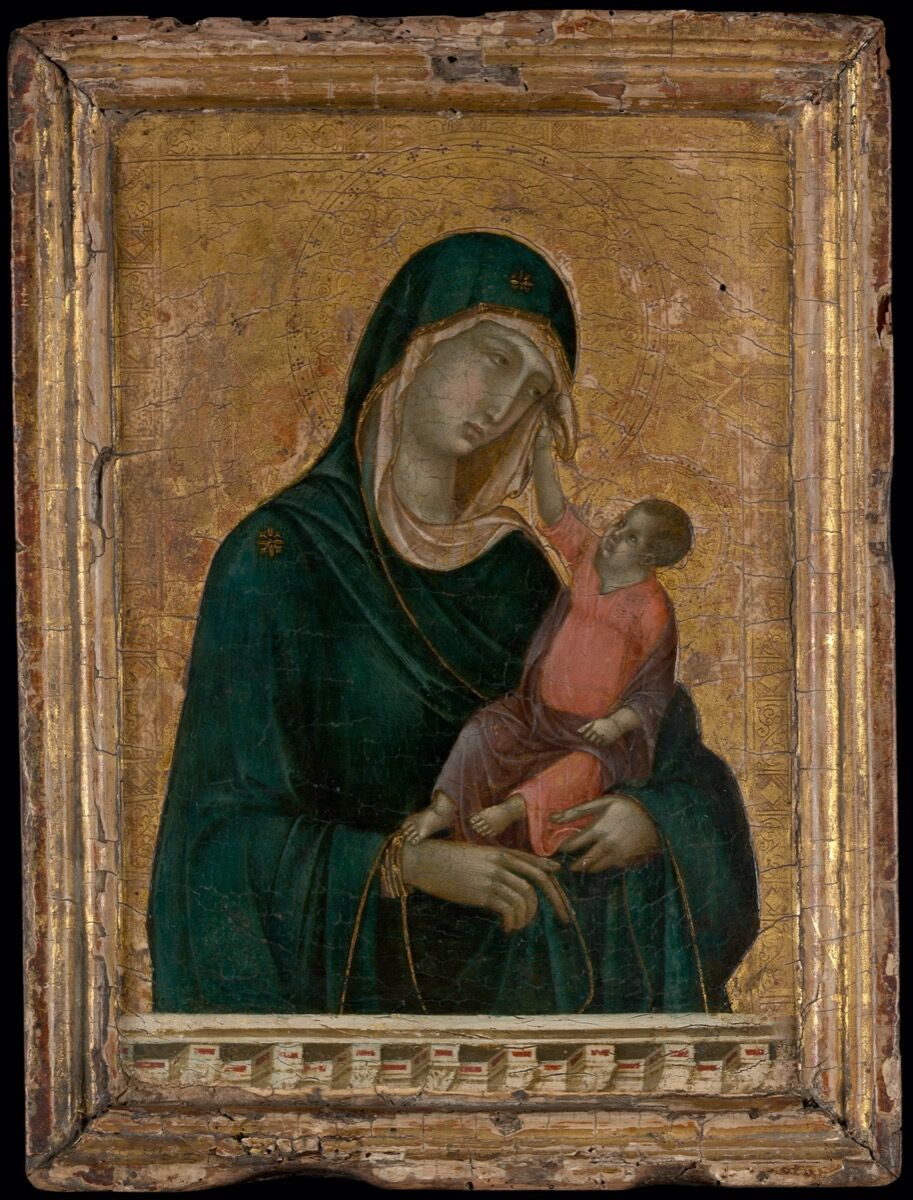 I have never thought that babies are cute. Though their characteristics—big heads; large, low-set eyes; chubby cheeks; a body with stubby limbs—represent the epitome of cuteness for many people, I find myself immune.
That’s why I am obsessed with the portrayal of infant Jesus in Madonna and Child (ca. 1290–1300) by
Duccio di Buoninsegna
. In Duccio’s depiction, baby Jesus has the uncanny appearance of a wistful, miniature-sized, middle-aged man. And throughout my work as a writer, I’ve tried to demystify highbrow aesthetics and concepts, so my gut reaction to Duccio’s Jesus has always been: “This baby Jesus looks like a sideshow freak, I love it!”
I am obsessed with his grotesque looks. It is a fixation that started in middle school, when my classmates and I openly laughed at this depiction of Jesus as a monstrous baby. However, as I grew up, I learned that the subject of my obsession has a deeper history.
Duccio’s Madonna and Child grounds divine figures with human details without sacrificing their sacred nature, a technique that would become one of the distinctive characteristics of Italian
Renaissance art
. There’s more than a semblance of humanism in the depiction of Mary, with her drapery displaying chiaroscuro and her tender, sorrowful expression portraying a range of realistic emotions. Yet infant Jesus is clad in the red cloth usually worn by adult Jesus throughout art history, indicating that his divine nature is still steeped in medieval iconography. 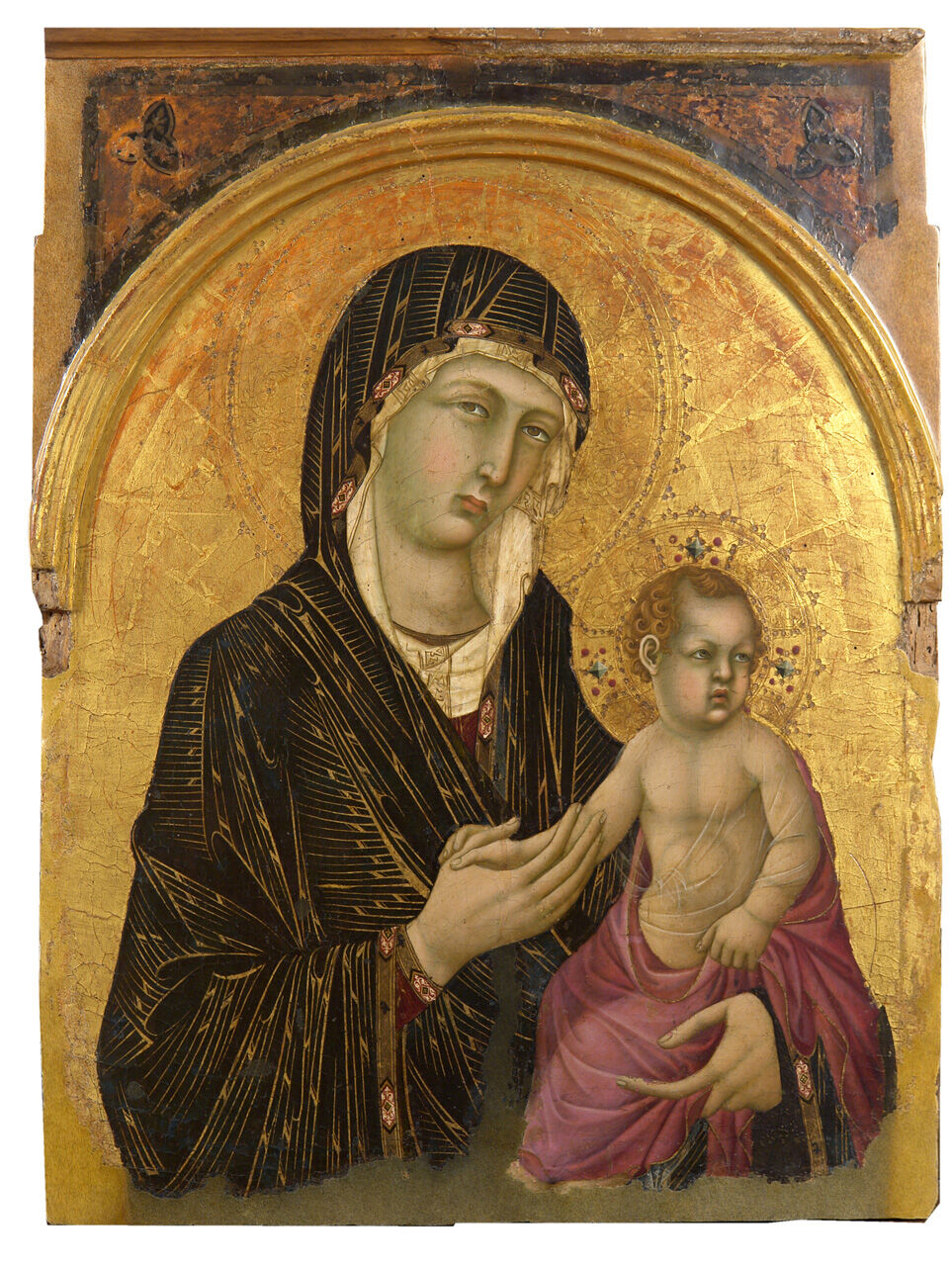 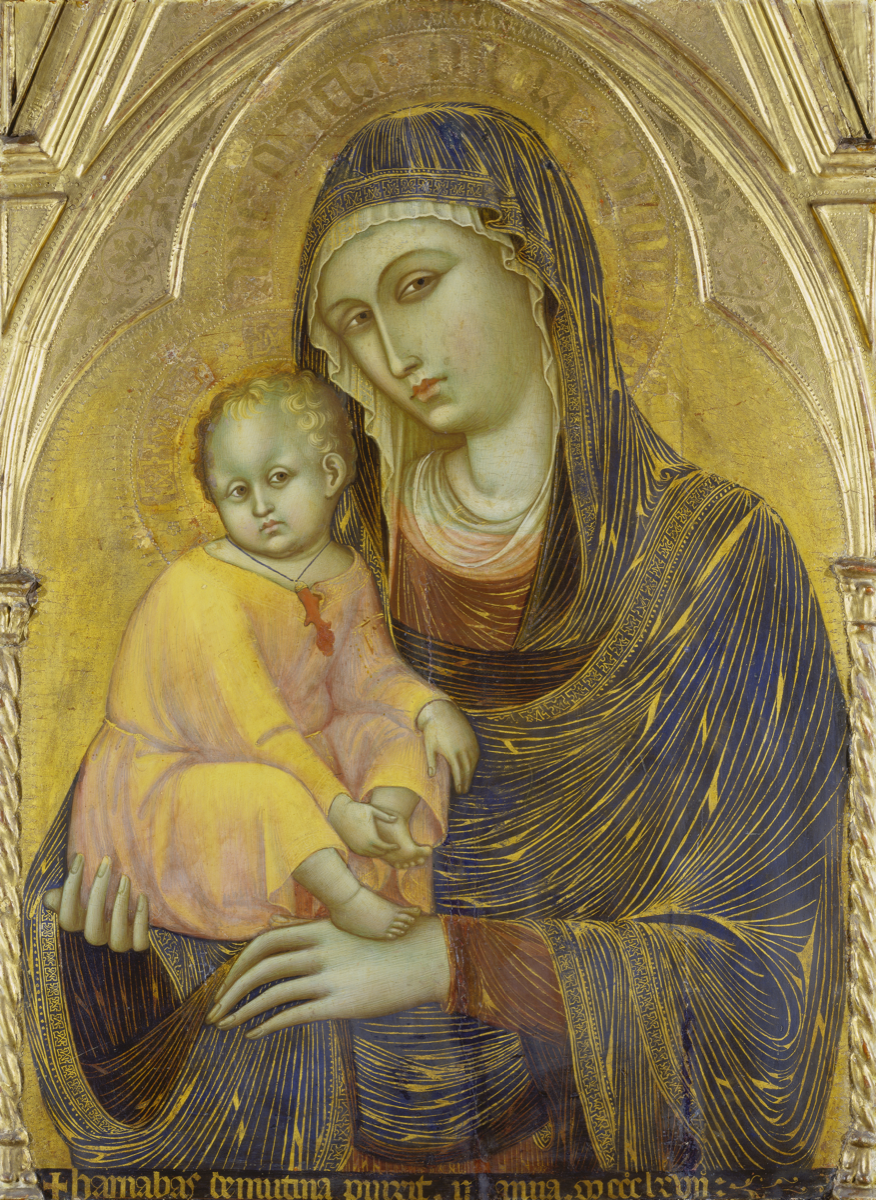 Madonna and Child is an example of a medieval depiction of Maestà (“Majesty”), or the recurring scene in which a seated Mary holds infant Jesus. In these scenes, Jesus frequently resembles a creepy old man. For example, the Jesus in
Cimabue
’s Maestà (ca. 1280) has the wise demeanor and ornate clothing reminiscent of the philosophers in
Raphael
’s School of Athens (1509–11); the baby Jesus of the Madonna of Veveri (ca. 1350) has a slight athletic build and a cold stare;
Barnaba da Modena
’s interpretation of the theme from 1367 presents him with a receding hairline; the infant Jesus of
Paolo Veneziano
’s Madonna of the Poppy (ca. 1325) has deep-set eyes with dark circles and a very small head; and
Simone Martini
, in his Madonna col Bambino n. 583 (1305–10), gives Jesus a chubby, childlike face with round, low-set eyes, but offsets that naturalism with a muscular and stocky physique.
There are two reasons why infant Jesus sports long limbs, abs, a tiny head, a sneer, a wrinkly neck, and even a receding hairline in medieval art. The first is that medieval society did not really think of childhood as a distinct period of life. “Medieval art until about the twelfth century did not know childhood or did not attempt to portray it,” writes Philippe Ariès in his book Centuries of Childhood: A Social History of Family Life, which is a foundational work in the study of the perception of childhood in history. Children, in fact, were perceived and portrayed as miniature adults because neither society nor artists had any conception of childhood as we now understand it. As a consequence, portraying infant Jesus as a child would not have made sense during the medieval period of art.
The second reason that infant Jesus looks the way he does in medieval art is more symbolic. It’s tied to the idea of the homunculus, literally “little man.” The homunculus argument posited that an infant was born as a fully formed, miniature adult. This concept is rooted in alchemy, where Zosimos—an alchemist and a mystic who was active between the 3rd and 4th centuries—claimed to have encountered a priest who changed into “the opposite of himself, into a mutilated anthroparion” (“anthroparion” being the Greek equivalent of “homunculus”). The pursuit of the homunculus would crop up in many later alchemy texts. 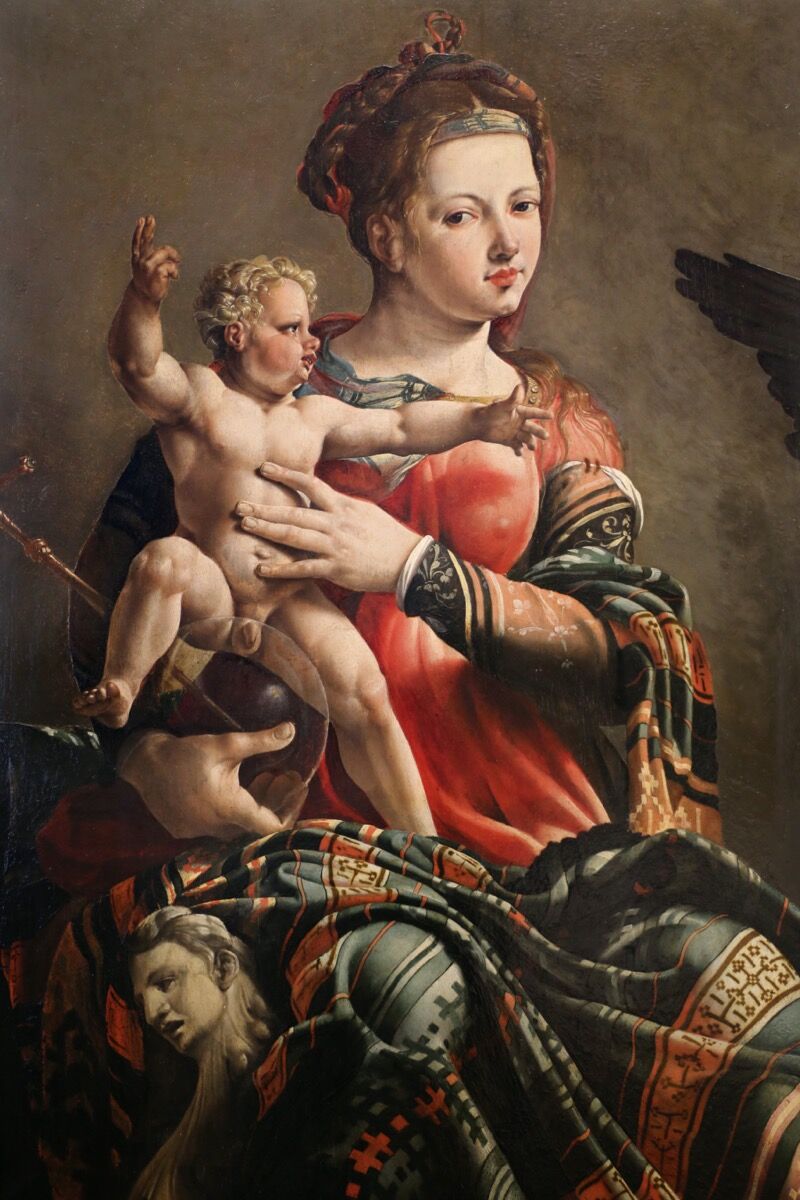 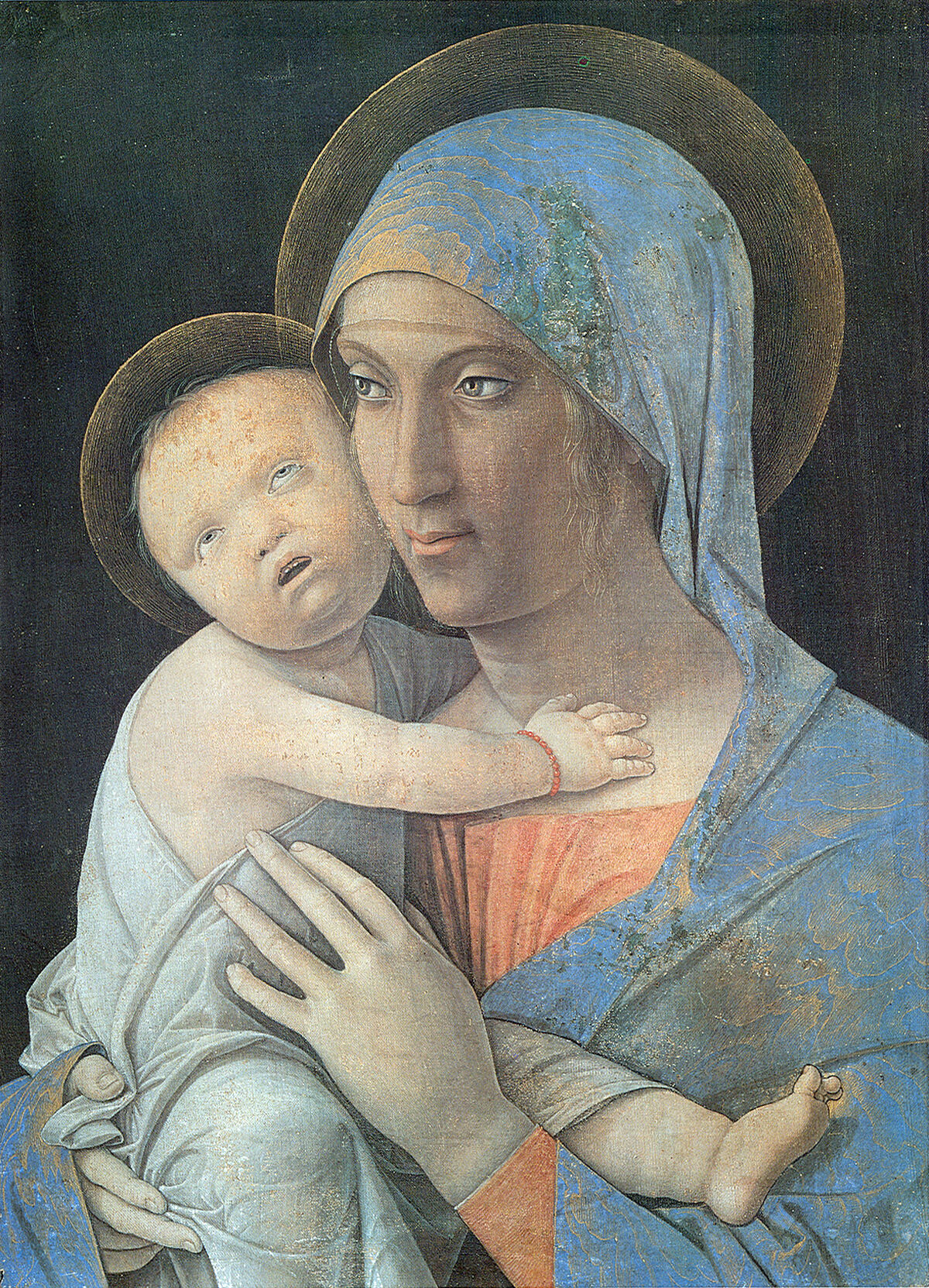 Advertisement
While this tendency to depict Jesus as a miniature adult subsides to some extent in the Renaissance, when childhood starts to become recognized as a phase of life in its own right, there are still some outliers. The Madonna and Child as depicted by
Andrea Mantegna
(1490–1500 or 1463–65) portrays the infant in a state of distress, giving him a sickly appearance. In St. Luke Painting the Virgin—a 1532 painting by the Dutch master
Maerten van Heemskerck
that represents St. Luke in the act of portraying Mary, dressed like a noblewoman—gives infant Jesus an uncanny appearance, combining a childlike face with the bodily proportions of an adult with an overly muscular body.
It is not until the 1600s when we find portrayals of children that would be deemed “cute” by modern standards. The Christ Child with a Bird, an anonymous painting from the early 17th century, shows infant Jesus wearing a diaphanous tunic with lace trim tenderly holding a bird, his eyes wide, and his proportions realistic for an infant.
Duccio’s Jesus, while not the creepiest in art history, remains my favorite medieval depiction of the messiah. The painting marks the first time we see a sign of humanism appear within a deep-set medieval iconography. Jesus appears as a fully formed old man draped in red, a symbol of the passing medieval world. Meanwhile, Mary is cloaked in blue, her face and features more closely resembling life as it was.
This juxtaposition will always appeal to me, because it further draws my attention to Duccio’s image of Jesus. He is an infant, yet he is fully formed—an all-powerful and unsettling child savior.
Angelica Frey
Related Stories

I’m Obsessed with This Painting of Looty, the Famous Pekingese
Advertisement
Further reading in Art