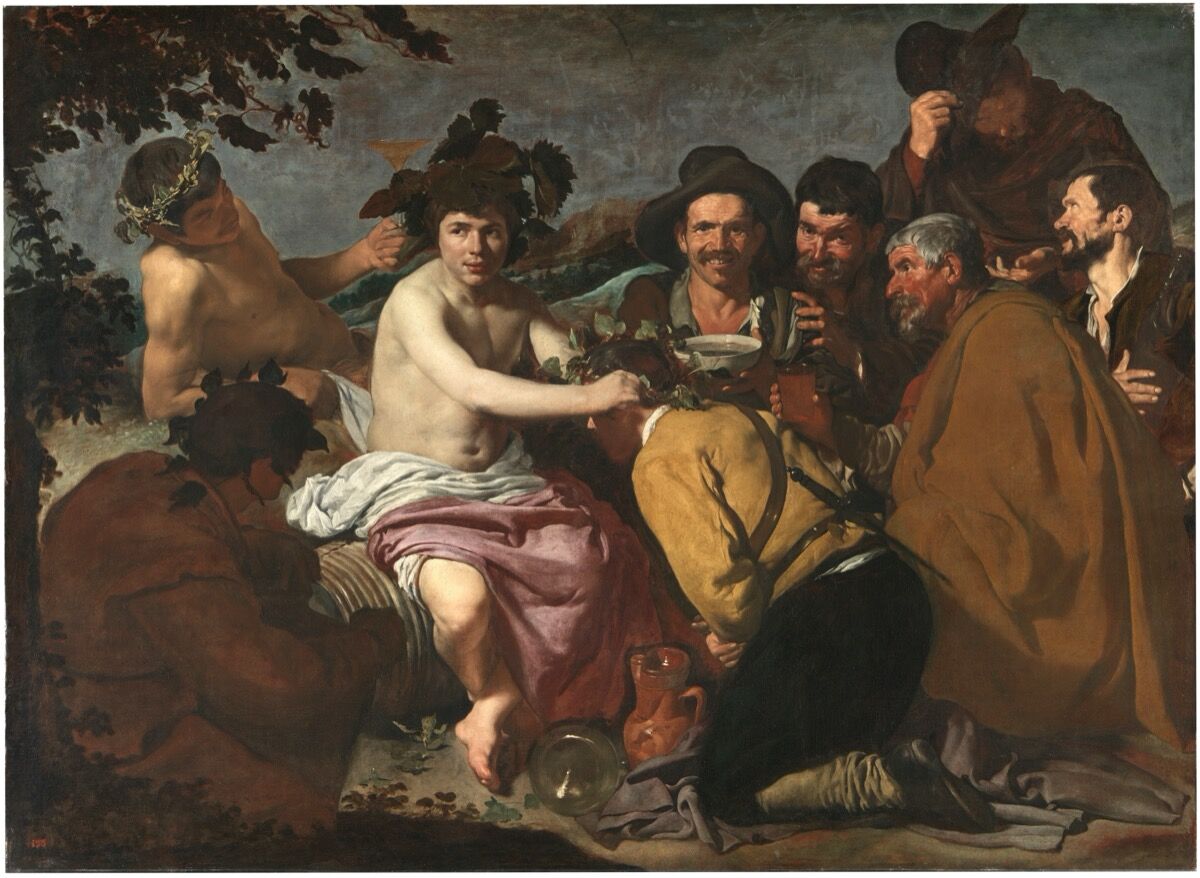 Diego Velázquez
’s first foray into depicting mythology, The Triumph of Bacchus (ca. 1628–29), really was something different. While other artists’ Bacchuses were cruising in chariots drawn by tigers, parading with putti, and eating grapes dangled from above, Velázquez’s wine god is just chilling on a barrel with some regular old 17th-century drunk guys.
In Velázquez’s The Triumph of Bacchus (commonly known as The Drunks), Bacchus goes from his traditional look of middle-aged and chonky to young and kind of foxy, and his normally supple-muscled, freshly powdered clique is swapped for sweaty, scruffy peasants. With their glistening brows and crumpled clothes, Velázquez’s drunk guys are all gritty realism. And why couldn’t there be gods among us? I tend to agree with
Édouard Manet
, who proclaimed after his visit to the Prado in 1865 that Velázquez made all other painters “seem completely like fakers.”
I lived in Madrid for a few years, and whenever I went to the Prado, The Drunks gave me a little jolt every time it came into view. Peter Schjeldahl has said that “the hardest thing about getting Velázquez is believing your eyes, accepting that such superhuman lucidity is really happening.” And that’s exactly what kept me in front of The Drunks for over an hour one day, stepping back and forth, looking on my tiptoes and down, as details continued to emerge from the painting and astounded me. 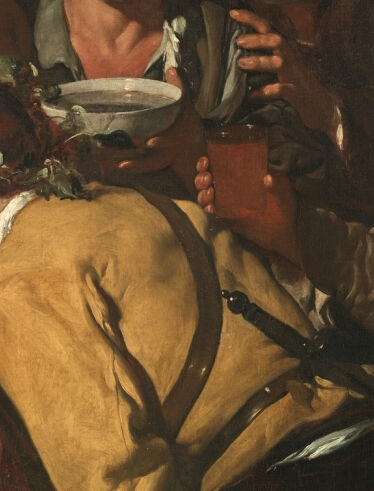 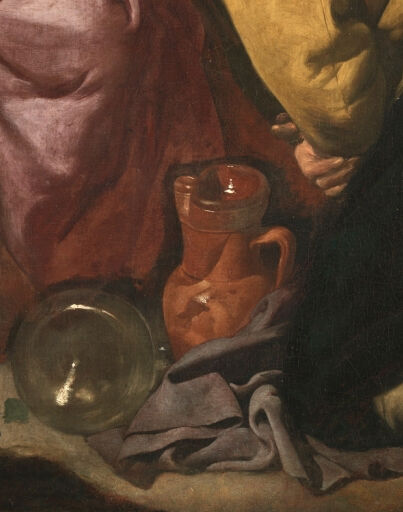 The Drunks is dotted with small but befuddlingly three-dimensional still lifes—a glistening terracotta jug, an overflowing white wine bowl, a cup that seems to glow in a grey-haired peasant’s hand—that pay tribute to the the Sevillian painter’s bodegón roots. And the contrast between Velázquez’s meaty modeling of cloth and his wispy, moody background inspires even more awe.
On the day I spent looking at the painting for over an hour, countless tour groups passed by, the leader of each one speaking a different language. I imagined these visitors from all over the globe having their own moment, however fleeting, with the drunk guys. After all, it is the drunk guys, not Bacchus, who look directly out at the viewer. Their gaze is conspiratorial, convivial, and never gets old.
Created shortly before Velázquez’s pivotal trip to Italy in 1629, The Drunks represents a turning point in the artist’s work. Until this point, Velázquez had only painted still lifes, religious scenes, and portraits; The Drunks represents an ambitious new direction in its complex composition and mythological themes. The piece has inspired Spanish painters ever since, from
Francisco de Goya
to
Ignacio Zuloaga
to
Luis Vassallo
. But the main reason why I’m obsessed with these drunk guys is personal.
When I moved to Spain five years ago, I was chasing down some family history. My grandfather was a Mexican American and native Spanish speaker, and worked as a translator at the American embassy in Madrid during the 1950s and ’60s. He loved being in Spain, and brought his wife and kids over when my mom was three months old. The story goes that my grandfather met an artist at his local bar—known to us now only by his signature, “L. Santos”—and paid him to paint a copy of Velázquez’s The Drunks, but only of the three drunk guys in the middle. 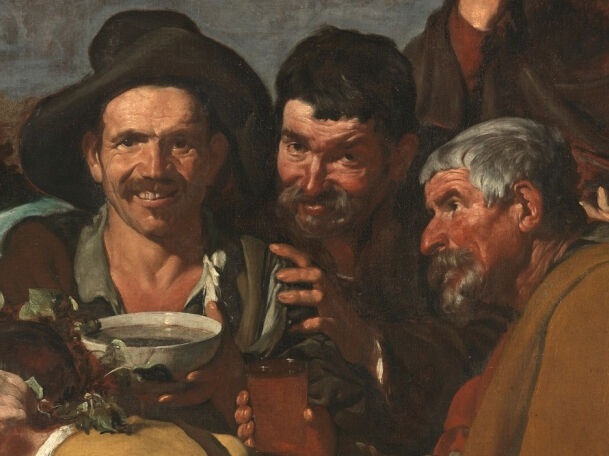 Advertisement
I never met my grandfather, and I’m not sure why, of all the masterpieces in the Prado, he picked this one. But my aunt suspects that the three figures represented something special to him, and reminded him of himself and his two closest coworkers, fellow World War II veterans, and drinking buddies.
Ever since I can remember, these drunk guys have been smiling at me from the wood-paneled wall above my grandmother’s kitchen. The reproduction was the first painting I ever saw. And in some kind of strange coincidence or twist of fate, one of my uncles turned out looking just like the drunk guy on the left as an adult.
I wrote most of this essay in January of this year, and I didn’t realize how much I’d think about this painting in the months since. In early March, I became sick. I was hospitalized just as Spain entered its national confinement, and I fell ill again during the peak of the outbreak. What’s happened has left me weaker than I’ve ever been, and I continue to struggle with my recovery.
In the darkest times, when the present moment and feelings of uncertainty have overwhelmed me, I’ve pulled from the rich, safe, stable place of my memory. And the place that I go to most often in my mind when I need to escape is to my grandmother’s little house by the railroad tracks in Schertz, Texas. There I am, back on her flowery couch. As my mom and grandmother chat softly beside me, I look up at The Drunks. “Come on,” they seem to say through their mustachioed grins, “there’s plenty of life left to live.”
Lauren Moya Ford
Related Stories

I’m Obsessed with This Painting of Looty, the Famous Pekingese