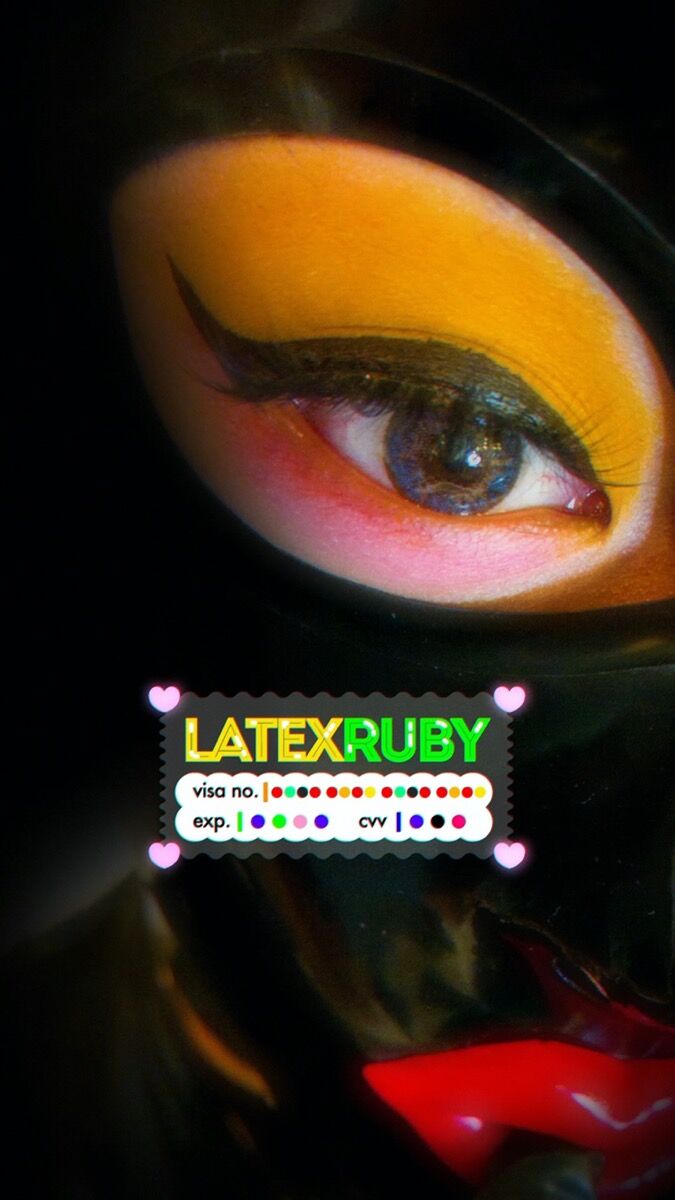 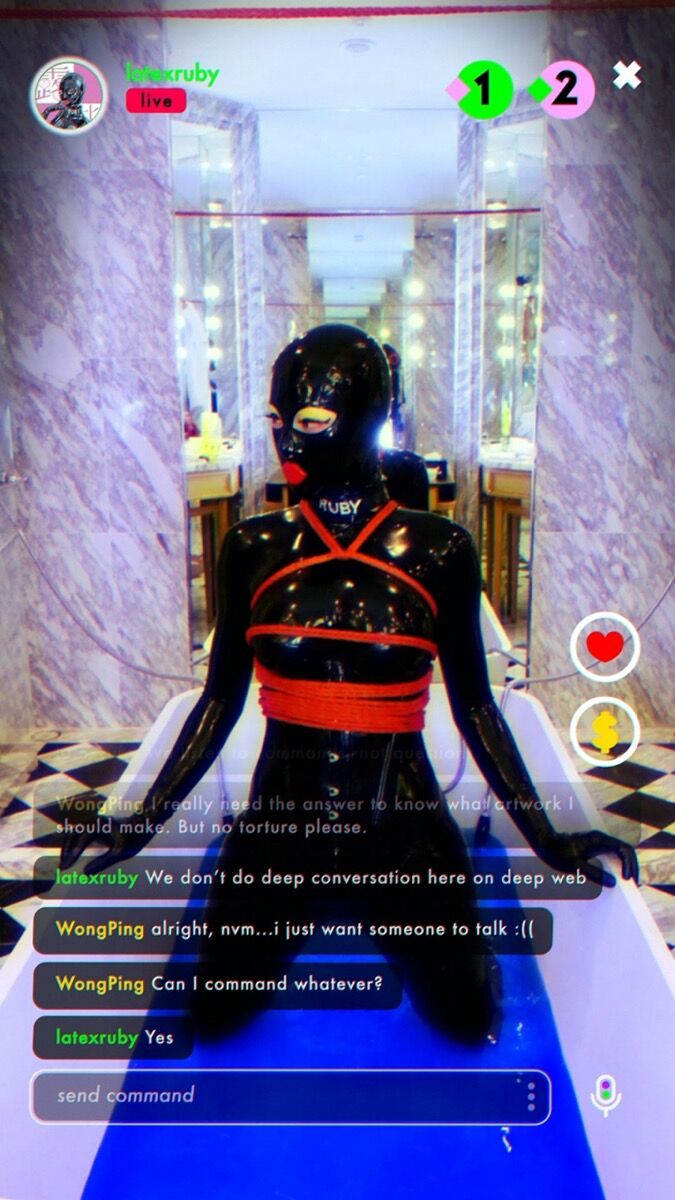 Wong Ping
’s The Modern Way to Shower (2019) was perhaps the most memorable artwork I saw this past December in Miami during Art Basel. Upon viewing his new video, I thought Wong had made a truly compelling, subversive, and very funny piece of art about an ongoing crisis—Hong Kong’s pro-democracy protests.
Art about contemporary politics can fall into many traps. With little time to process current events, artists make works that feel short-sighted now and quickly outdated later. Inspired by rage and immediate responses, such works can also come across as one-note, ill-informed, and unrefined. But in The Modern Way to Shower, Wong avoids such missteps by telling a weird, personal, and ethically fraught tale without putting a specific agenda front and center. 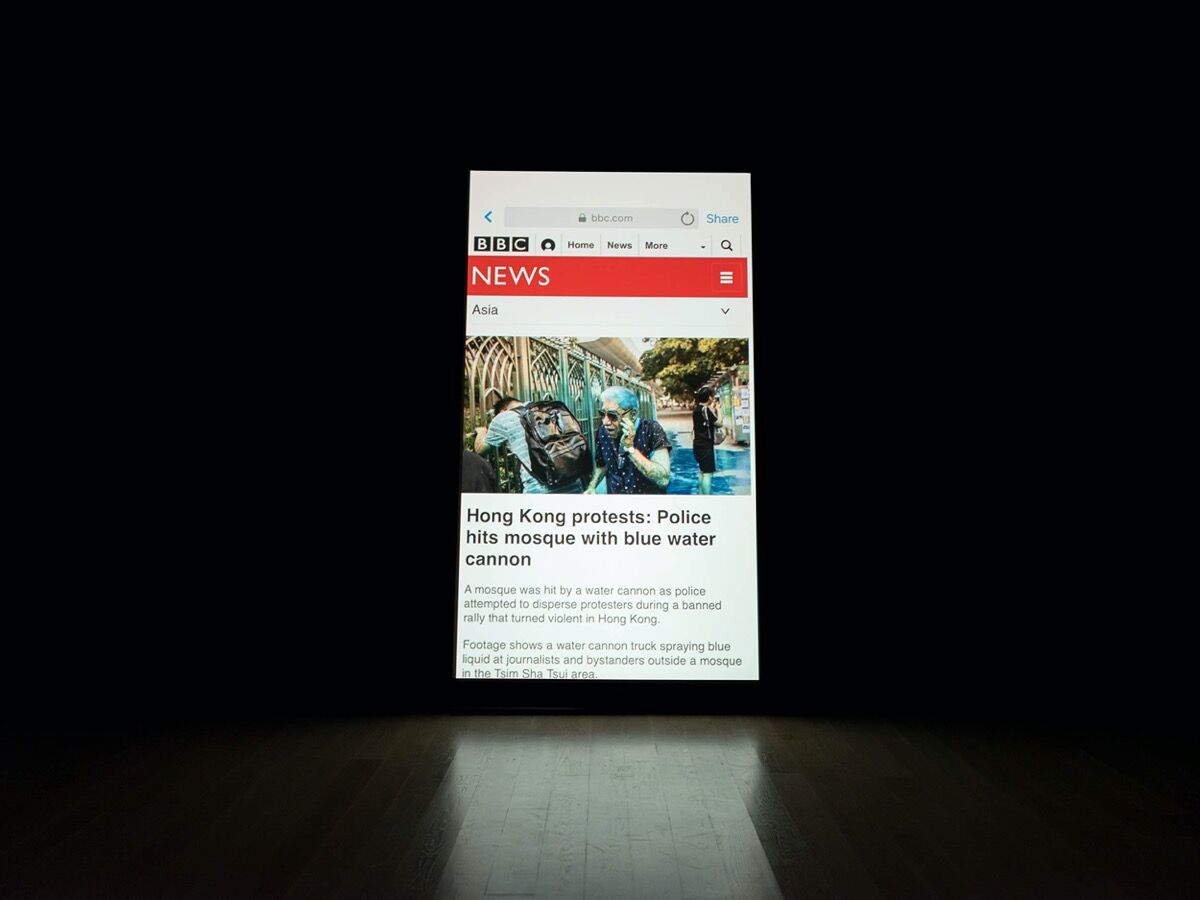 I’m particularly obsessed with a mysterious woman at the center of the film’s narrative: a sex worker clad in black latex named “Ruby.” She adds feeling to an otherwise razor-sharp satire, and she uncomfortably and powerfully implicates me and all viewers who observe violence and spectacle from halfway across the world.
Wong structures The Modern Way to Shower—a new commission from the Institute of Contemporary Art, Miami (ICA)—as an elongated look at his phone screen. The autofictional film opens with the artist receiving a message from the ICA staff, asking him if he’s made any progress with his commission for the museum. He responds, telling the staff that a psychic has informed him that his title for the commission should be “The Modern Way to Shower.” That’s as far as he’s gotten. When the artist types “psychic,” he accidentally spells out “psycho” first. The mistake and the wacky tale about the psychic set the tone for the rest of the film, which runs just over 12 minutes. 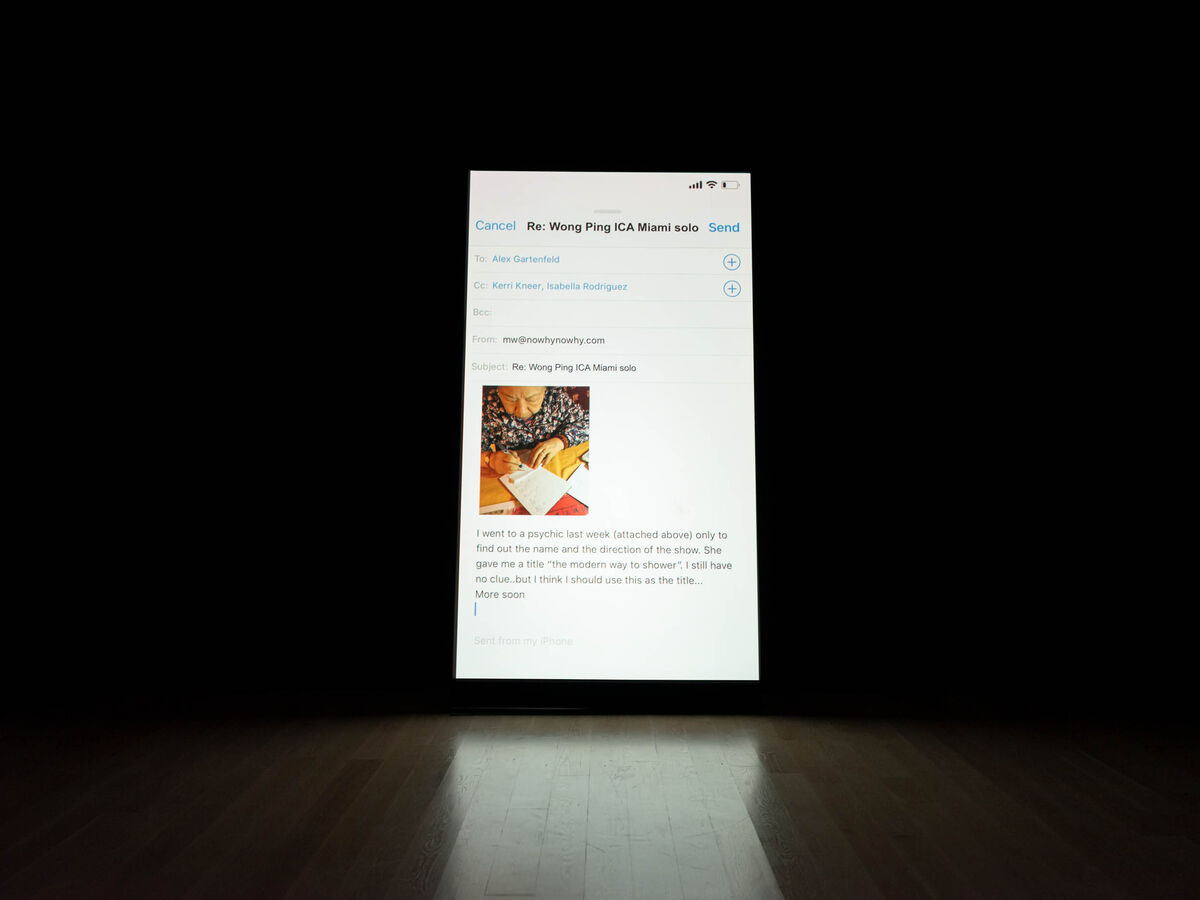 Advertisement
Next, we watch the artist open Instagram and toggle to a conversation with a user named “latexruby” (a.k.a. Ruby), who is presented as an online personality and “cam girl.” Somewhat suspiciously, Ruby has been on the platform since just last November: Is she Wong’s creation, as well? She presents herself in full costume, always wearing skin-tight latex from head to toe; only her eyes are visible through cutouts. In various posts, Ruby is alternately dressed as a nun, a bunny, or bound in the ropes used for kinbaku, Japanese bondage play.
Through direct message, Wong “commissions” Ruby to perform for him. “In blue water?” he writes. “Like the blue water cannon the police fired to protestors these weeks. A protest theme [sic] shower [water drop emoji, water drop emoji].” 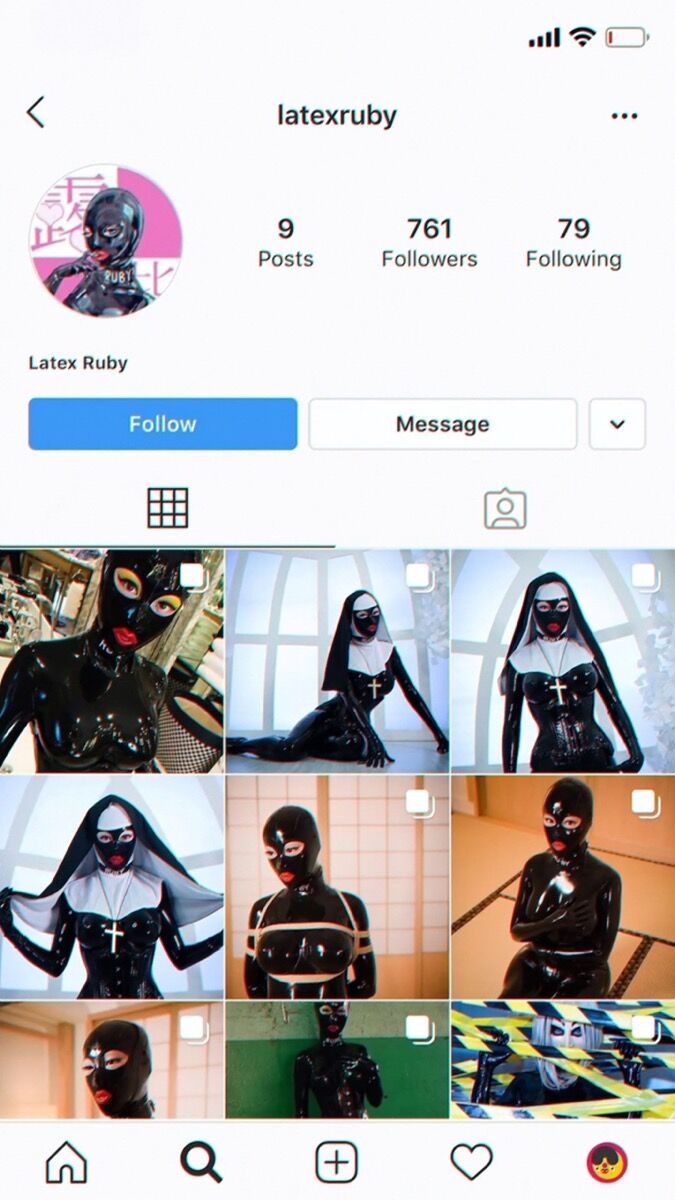 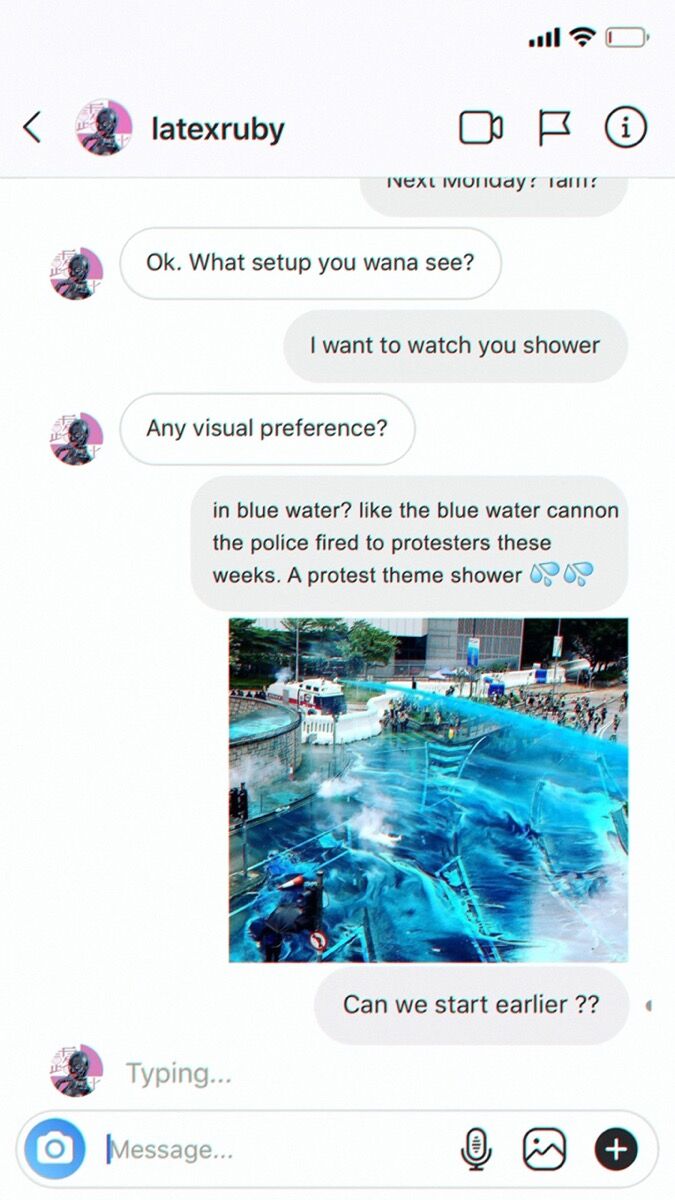 “Well,” I thought as I watched the video for the first time, “this is going somewhere very unexpected.” Here was a fictionalized version of the artist, turning political protests in his home country into the subject of a kinky fantasy. And he was using the museum’s money to fund its fulfillment.
For the rest of the film, we watch a fetish scene in an ambiguously located bathroom as Ruby plays “a protestor tortured by the police.” An assistant binds Ruby in bright red rope. The black latex–clad lady sits in a tub of bright blue water. As long as the artist keeps paying, the assistant and Ruby will fulfill his commands, which are typed as messages across his phone screen. He requests for the assistant to tie Ruby to the ceiling. If Wong wants the assistant to be gentle, he’ll have to pay extra—roughness is free. We watch as the artist ignores Tinder notifications, pulls up news articles, and scrolls through Spotify. 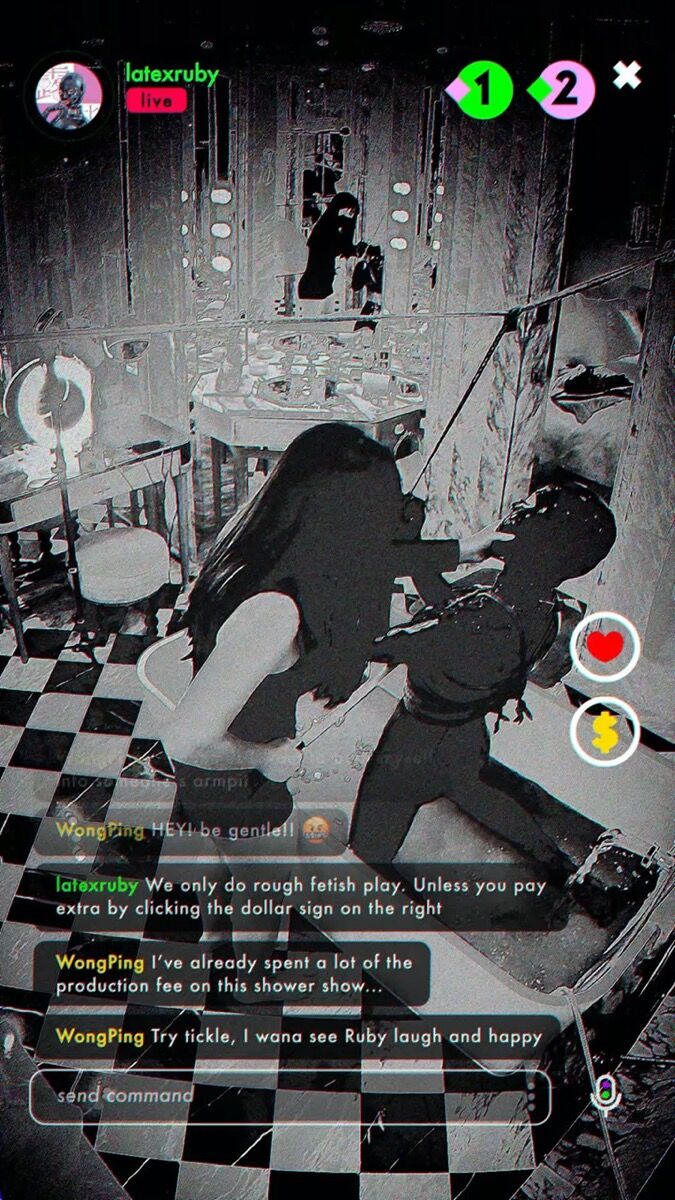 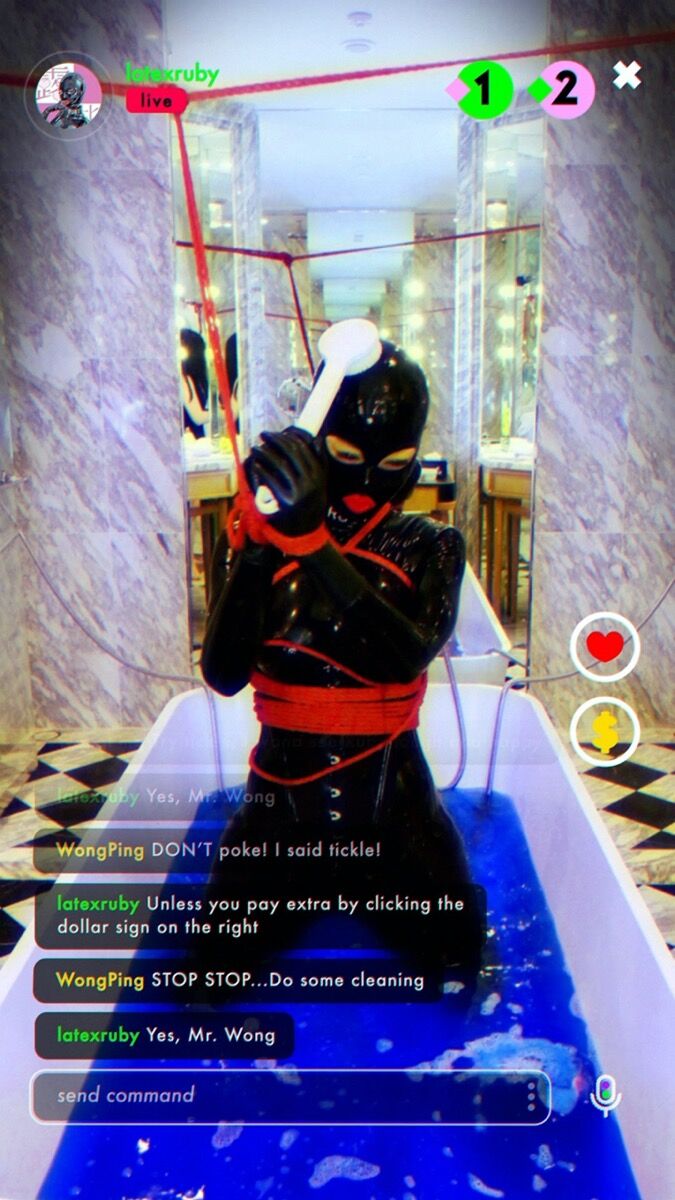 Gradually, metaphorical meaning begins to build, as does a sense of mystery. Who is Ruby? And why does she subject herself to fulfilling the fantasies and demands of strangers? The fictional Wong wonders at one point how a person could gain pleasure from watching Ruby treated this way, even though he was the one who asked for the performance in the first place. Why, indeed, do we keep watching violent, sadistic scenes play out across the globe? While protestors are faced with police brutality in Hong Kong, the Western world and media just keep watching.
At one point, Wong’s mother messages him, asking if he’s at the protest. He’s obviously not—he’s spending the museum’s money to look at fetish footage instead. An air of decadence and shame infuses the piece, particularly as Wong, for no apparent reason, begins to tell Ruby unsavory details about his body and his life. 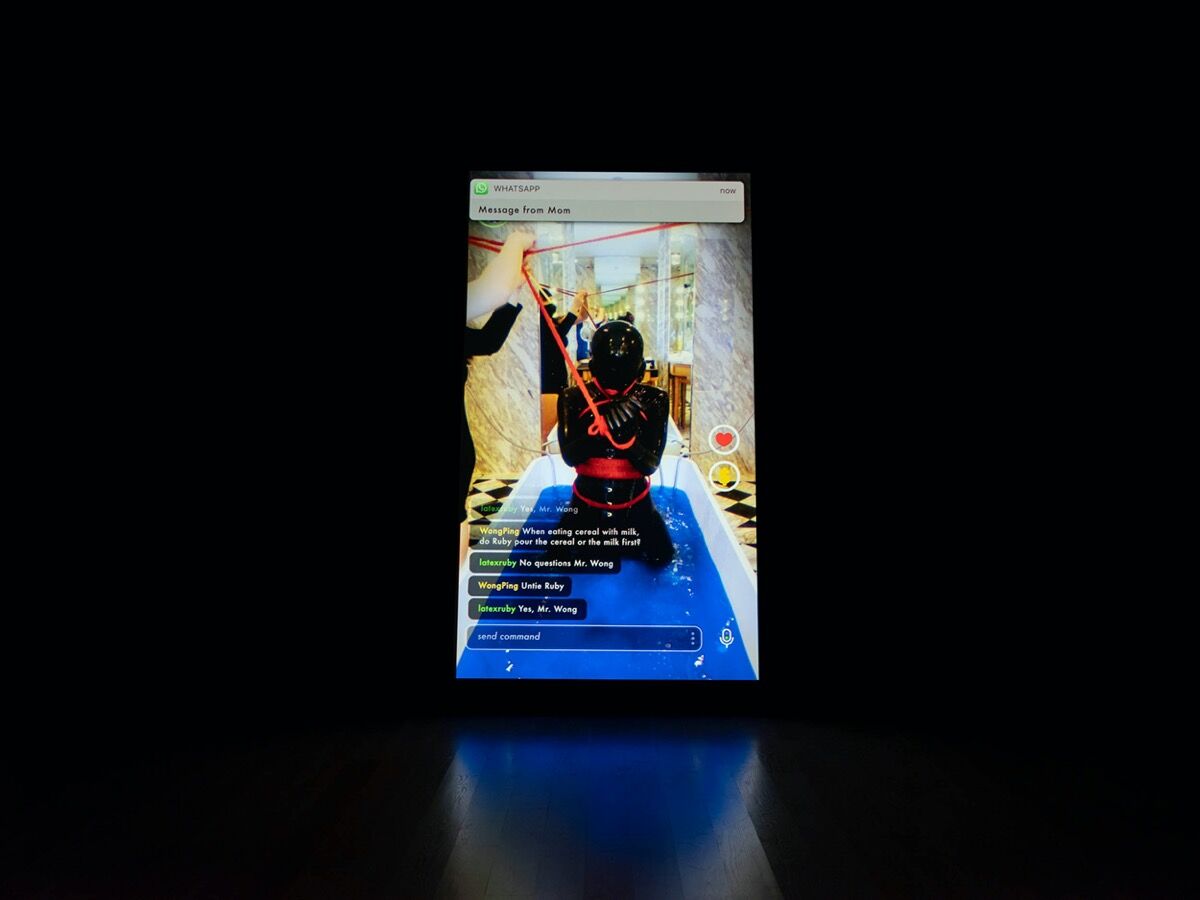 Though the film features the fictional Wong as its protagonist, the masked Ruby is really at the center of the piece, both visually and conceptually. We know she’s getting paid for her work, but the struggle looks very uncomfortable. The mystery of the film—who is this woman, and how does she feel about her extraordinary circumstance?—goes entirely unanswered. We never discover more about Ruby, because the film’s protagonist never asks.
As with so many stories of atrocities far from home, details about affected individuals remain hidden, obscured by the vulgar and superficial information that plays out on our screens. Wong’s film ends when the protagonist’s phone dies. If only protests, and all global unrest, had such tidy conclusions.

Send a 150-word summary of the detail in a work of art that you can’t stop thinking about to [email protected] with the subject line “I’m Obsessed.” We’ll review submissions for potential inclusion in our publication.
Alina Cohen is a Staff Writer at Artsy.
Related Stories 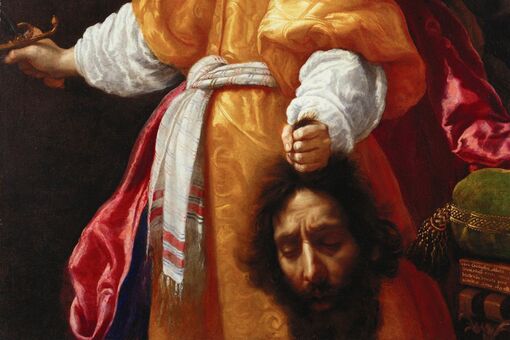 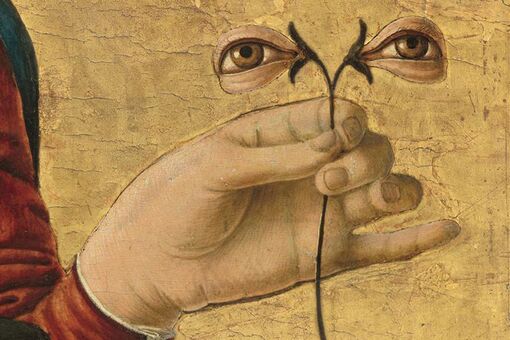 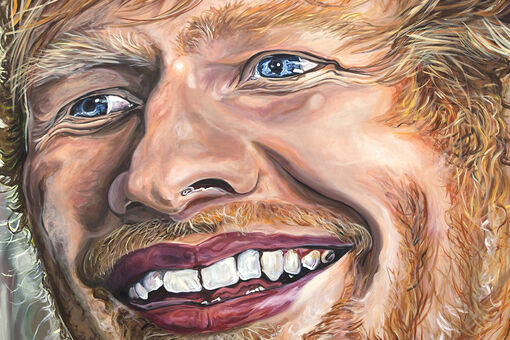 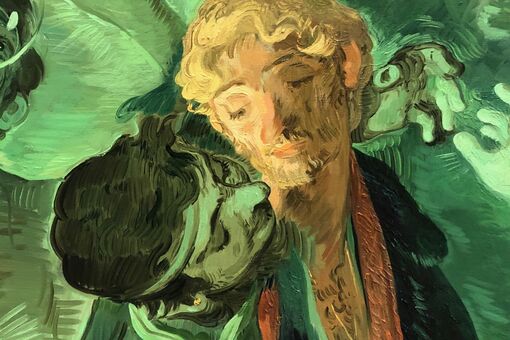