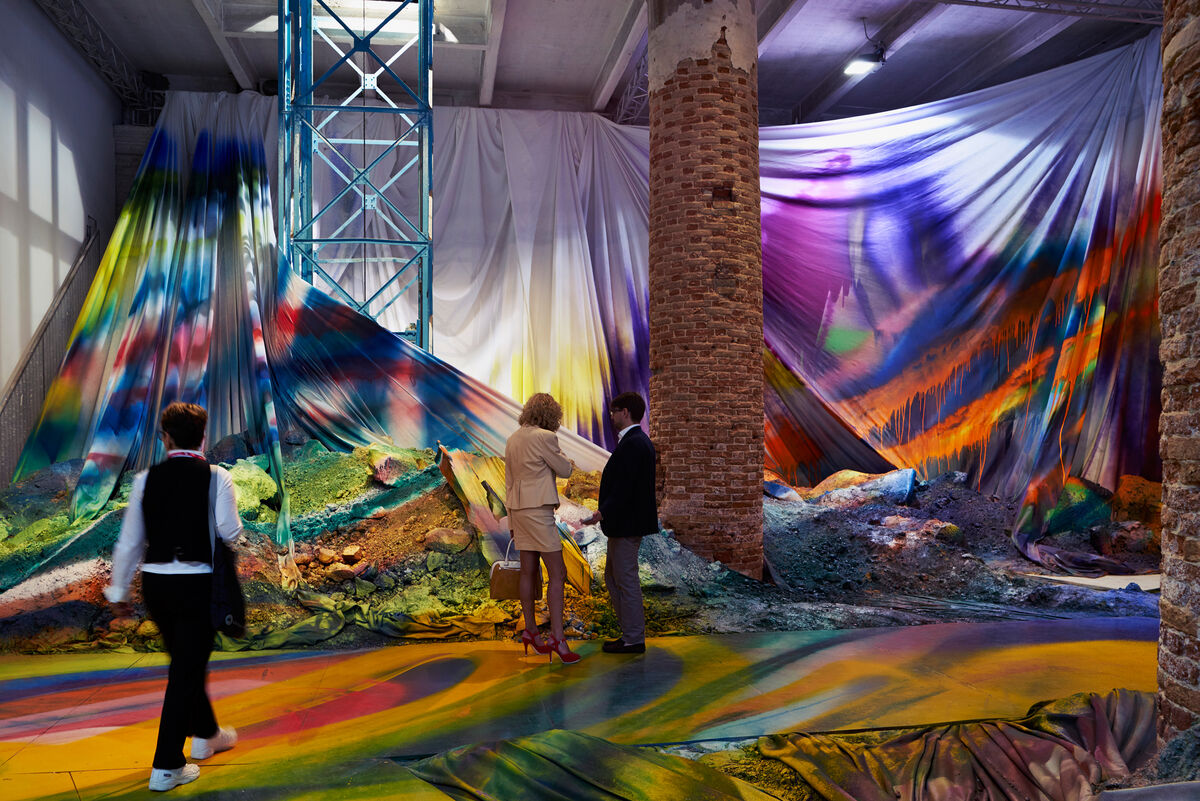 Curated by Okwui Enwezor—who has a Documenta under his belt and is currently the director at Munich’s Haus der Kunst—“All the World’s Futures” comprises 136 artists from 53 countries. Nearly two-thirds of those artists have never shown at the Biennale before. The roster gives a nod to art-world and Biennale greats,
Georg Baselitz
,
Bruce Nauman
, and
Hans Haacke
among them.
Philippe Parreno
’s installation of Flickering Light (2013) sconces practically serve as an inconspicuous docent throughout the show. But Enwezor’s main interest (at least where artist selection is concerned) clearly lies in expanding contemporary art’s horizons beyond both established art-world centers and new flashpoints in emerging markets. The project builds upon the 2013 Biennale of Massimiliano Gioni, whose self-described encyclopedic exhibition put an intense focus on outsider art. 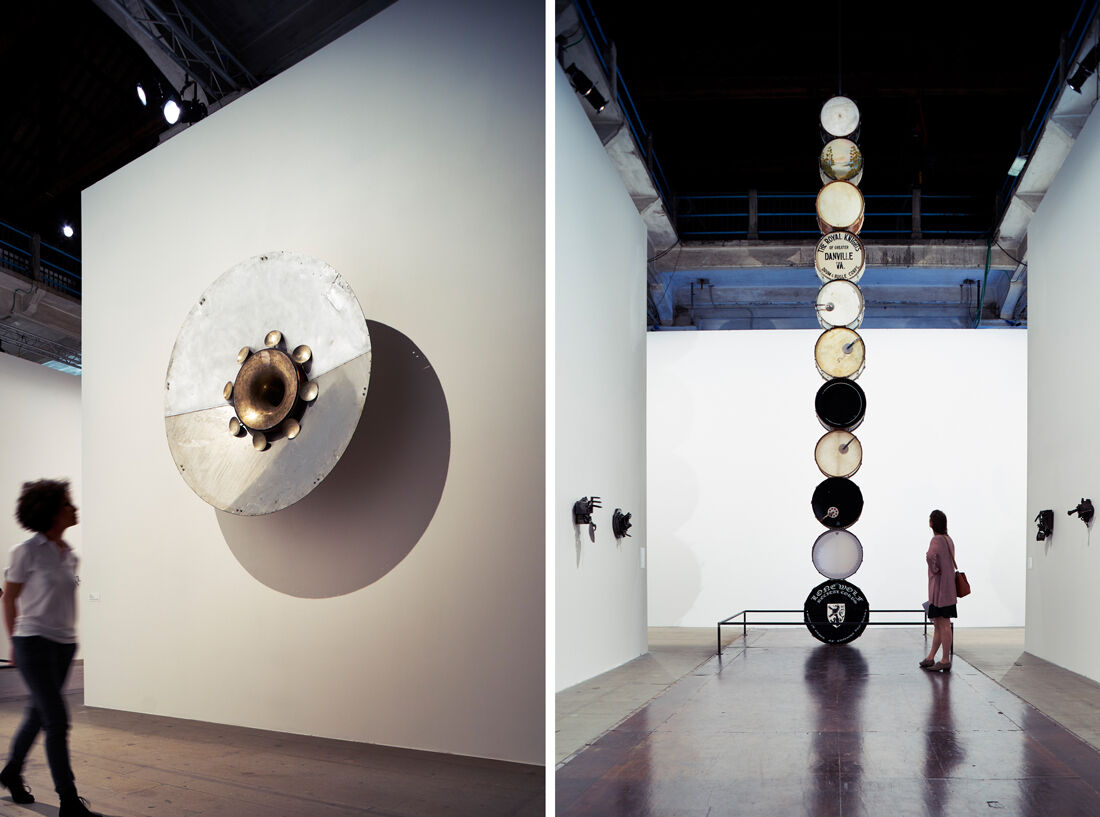 Exemplary of Enwezor’s new locus are projects like A Trans-African Worldspace by artist organization The Invisible Borders Trans-African Project. Located near the end of the Arsenale, the documentary effort catalogues road trips taken by participating artists across borders and wide swaths of the African Continent. Still to debut this Friday is the first of a series of films made by “emergency cinema” documentarians Abounaddara, an anonymous collective based in Syria that has been tracking the atrocities unfolding in the country since 2010.

The two represent larger documentarian tendencies across “All the World’s Futures.” The exhibition clearly makes a point. But it does so by showing, not telling. Enwezor uses a vast series of case studies to highlight the negative conditions and overwhelming precarity created by our late-capitalist society rather than setting up a series grande and prescriptive conceptual projects. Low points in the show are just such pieces, expressly set out to prove something or actively change behaviors rather than letting the viewer come to the conclusion on his or her own—Adrian Piper’s The Probable Trust Registry: The Rules of the Game #1–3 (2013) sticks out as one of these. 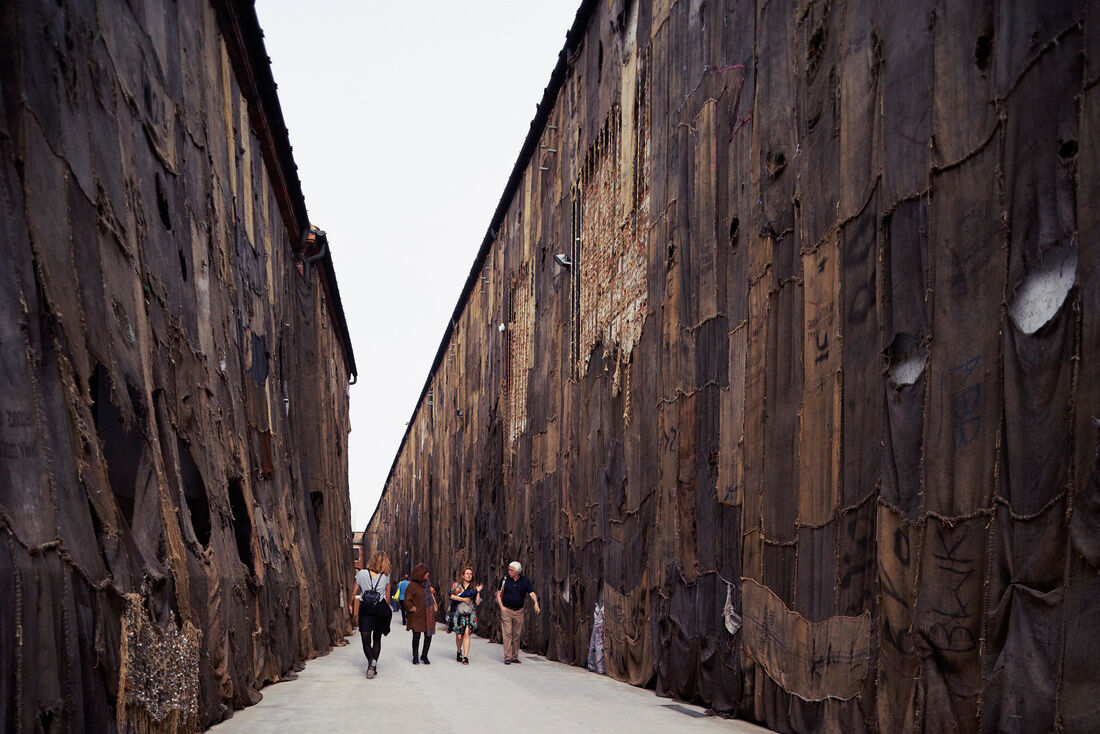 Advertisement
Because of this focus on displaying real conditions, it’s perhaps unsurprising that Enwezor does most of his head-whacking with the video works selected for the Biennale. They act like topic sentences of paragraphs filled in with sculptures, paintings, and installations and are repetitive in their themes to an almost (but not quite) annoying degree. Particularly stressed are works that focus a meditative lens on workers working. If the Biennale were a piece of music, this would be Enwezor’s chorus.
Antje Ehmann and recently deceased film legend
Harun Farocki
’s Labour in a Single Shot (2011-14) takes hundreds of one- to two-minute glances at myriad individuals exchanging activity for capital. (The short films cycle through on five screens staggered throughout the space.)
Mika Rottenberg
guides her viewers through an improvised pearl factory to a backroom cinema, where the 22-minute-long film NoNoseKnows (2015) shows the process of harvesting farm-raised pearls, with workers slipping small chips of shell into unsuspecting oysters with a scalpel. Im Heung-soon’s Factory Complex (2014) is more in the traditional documentary mode, interviewing Southeast Asian sweatshop workers, among others, about how much they get paid ($110 a month), their rent ($30 a month), and if they know how much each of the 500-plus shirts they’re charged with churning out from their assembly line a day costs in the West (no). 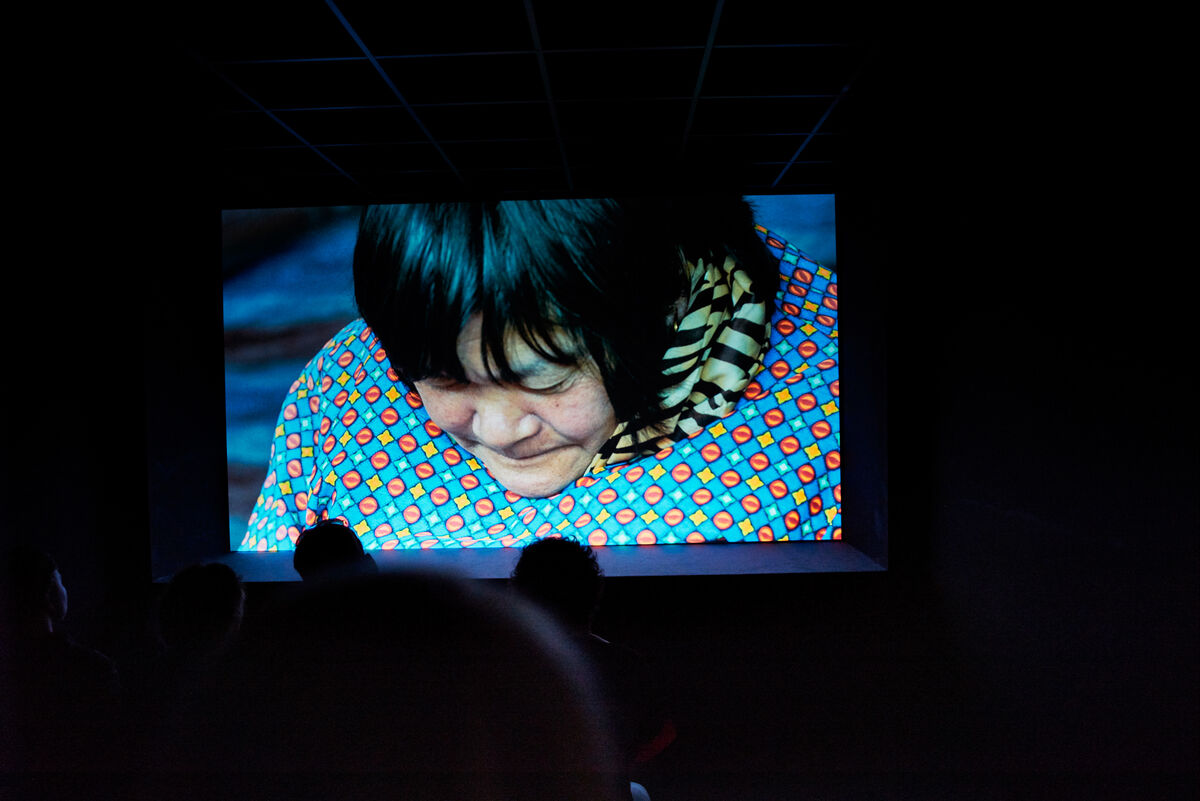 Over in the Giardini’s central pavilion,
Isaac Julien
’s KAPITAL (2013) lives underneath the balcony of the David Adjaye-designed “Arena,” where readings of Marx’s Das Kapital are interspersed with performances by
Olaf Nicolai
,
Jeremy Deller
, and
Charles Gaines
, and others. Julien, who also debuted a collaboration with Rolls-Royce in Venice on Tuesday, enacts perhaps the most direct trouncing of the capitalist system. At the onset of his film installation Stones Against Diamonds (2015), the artist interviews American Marxist scholar David Harvey about the role of credit as a both “necessary and essential” part of the system, of attaining scale, but one that “is also uncontrollable.” “If you stop debt, you stop capital,” Harvey adds in the film. Assuming you started “All the World’s Futures” amid Naumann’s field of crossed swords and neon text pieces—Human Nature / Life Death / Knows doesn’t know (1983)—in the Arsenale, Julien’s piece is one of the last along the exhibition’s path. “If you didn’t get it yet, let me spell it out for you,” it serves to say. 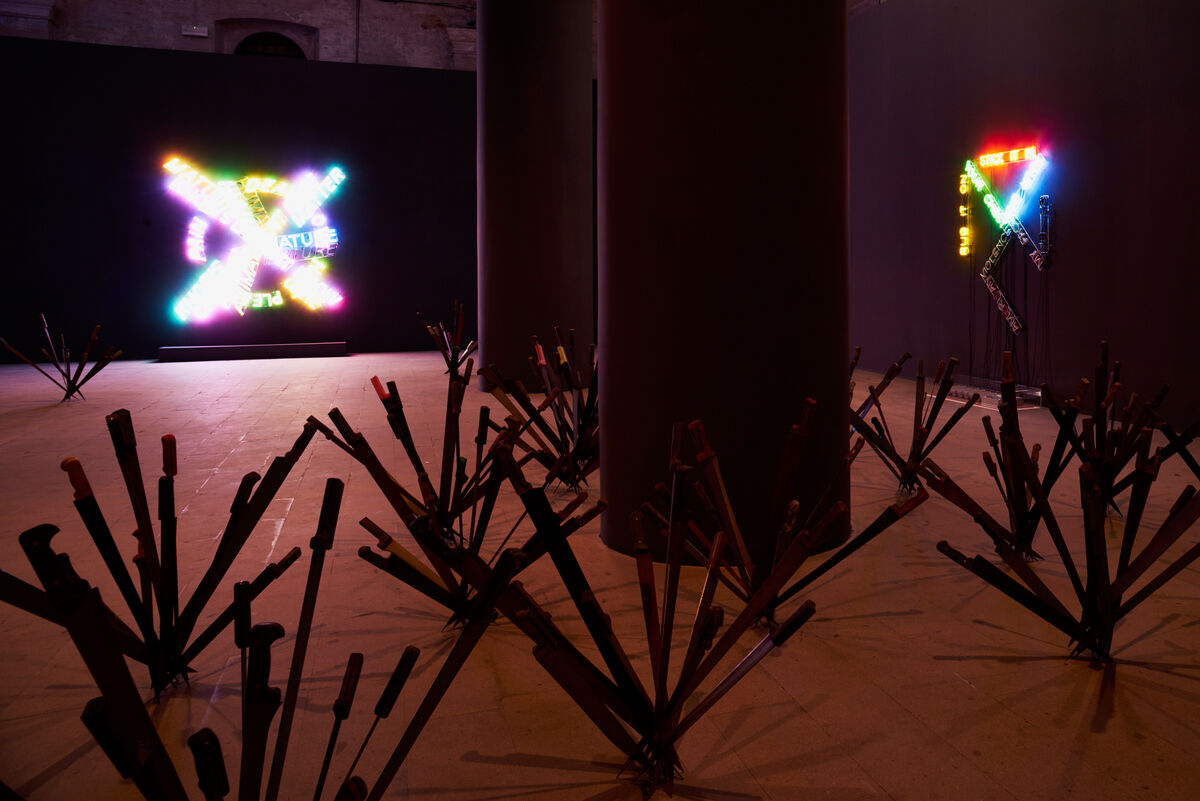 As curatorial strategies go—at least ones in line with the Hans Ulrich Obrist School of Curating (HUOSOC) of using artists to illustrate a given thesis—Enwezor’s is particularly aligned with the times. If you can’t get through a 136-artist show without receiving more than 50 emails, 20 texts, and a couple phone calls, it probably means attention spans have been reduced. It requires being a little more dogmatic, persistent, and repetitive to get a point across than was previously the case. (Even if you only spend 30 seconds watching each of the videos in “All the World’s Futures,” trust me, you’ll get it.)
But there’s a more heady rationale behind the strategy too. The exhibition is, after all, meant to be guided by Walter Benjamin’s interpretation of the central figure in
Klee
’s Angelus Novus (1920) at the start of Benjamin’s seminal 1940 text Theses on the Philosophy of History. “Where we perceive a chain of events, he sees one single catastrophe which keeps piling wreckage upon wreckage and hurls it in front of his feet,” Benjamin wrote. That’s what Enwezor gives us in his Biennale: not individual artworks to be contemplated as such but bits of detritus—from
Katharina Grosse
’s dolled up rubble (Untitled Trumpet, 2015) to
Theaster Gates
’s partial reconstruction of a Chicago church’s roof and organ (Martyr Construction, 2015),
Pino Pascali
’s cannon (Cannone Semovente (Gun), 1965) to
David Maljković
’s boxes of collective memory (New Reproductions, 2015)—heaped up to be taken as a sum. Whether or not you leave Venice a Marxist, the havoc is impossible to ignore.
Alexander Forbes is Artsy’s Consumer Marketplace Strategist. He was previously the Executive Editor of Artsy Editorial.
Explore the 56th Venice Biennale on Artsy.
Related Stories