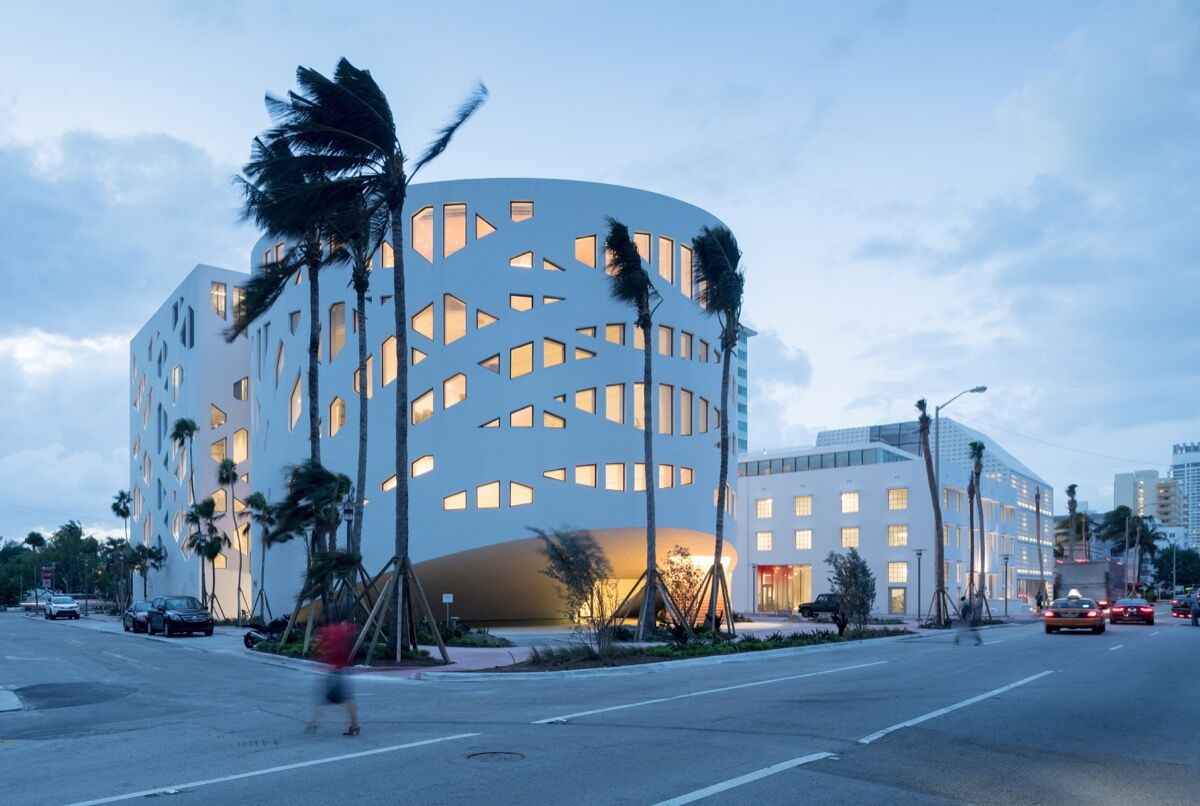 Shohei Shigematsu first met real estate developer Alan Faena in 2010 at a barbeque in the courtyard of Faena’s five-star, Philippe Starck-designed hotel in Buenos Aires. Shigematsu, an architect, knew the Argentine businessman’s story: By developing that very hotel, as well as several other nearby projects, Faena had transformed the run-down Puerto Madero neighborhood into a desirable area that boasted the highest real estate prices in the city.
Shigematsu, a partner at the Office for Metropolitan Architecture (OMA), and Faena got to talking. What began as casual conversation over a fire pit soon blossomed into a full-fledged partnership between OMA and Faena, culminating in the design of Miami Beach’s newest cultural center. Dubbed the Faena Forum, the building opens its doors this week—just in time for Art Basel in Miami Beach and the surrounding Miami Art Week.
Today, the Forum is a 50,000-square-foot space set to host art exhibitions, concerts, lectures, dance performances, and theater. But the structure has roots in a more abstract conversation about brand identity organized by OMA’s research and branding arm, AMO.
Shigematsu, who headed the Faena Forum project, said that as these discussions progressed, it became clear that the Faena brand was split between its commercial and cultural objectives. Case in point: Although Faena’s first major property was his Buenos Aires hotel, the businessman was also the driving force behind the nearby Faena Arts Center, which opened in 2011.
“We told them culture is as important as your commercial ambition,” the architect told Artsy. “Your strength is that those two are intertwined. It’s not just lip service as a developer trying to incorporate culture—one sustains the other.” Shigematsu credits the Miami project’s eventual success to these initial conversations. “Because we started from the branding, we were able to have profound discussions about conceiving a cultural center.” 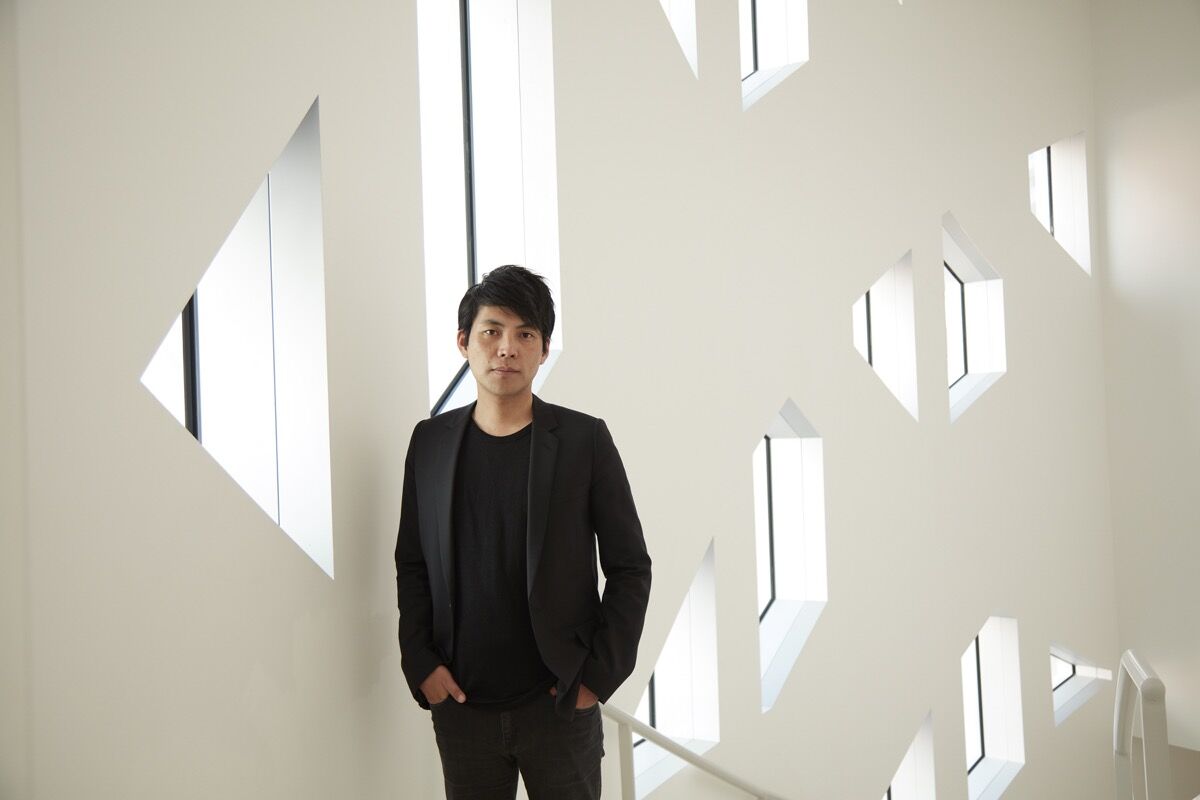 Portrait of Shohei Shigematsu by Bruce Damonte. Courtesy of OMA.

Although OMA first crafted proposals for several properties in Buenos Aires, focus soon shifted to a six-block, $1.2 billon development in Miami Beach that has since come to be known as the Faena District. This change of scenery introduced its own set of concerns. As Shigematsu notes, big beachside hotels are typically constructed as self-contained compounds that visitors rarely leave. Faena, however, wanted to create a neighborhood along high-traffic Collins Avenue. Though the district would be split by the road, with the hotel on the beach-facing half and the Forum on the other half, the developers wanted the area to feel like a cohesive whole.
To do so, OMA designed the Forum to serve as the heart of the neighborhood. Its circular footprint maximizes outdoor public space while also playing off the natural arc of the Faena Hotel across the street. “We saw the neighborhood almost like a Pangea—one single continent that got separated into different buildings, but with the Forum still claiming the center,” Shigematsu explains.
With a footprint in mind, the design had to be further refined. The building’s “forum” label offered a general guiding principle, but, as Shigematsu notes, “a forum is not even a building. It’s a kind of public square in the Roman period where people meet and where people discuss things. Encounters actually generate the content.” So, rather than designing a dedicated visual arts gallery or performance space or concert hall or boardroom, he was tasked with creating something that was, as he says, “all of the above.”
This mirrors a growing interest in flexible museum spaces that can accommodate new artistic mediums as well as an increasing focus on events and performances. “The role of museums is changing nowadays because of the diversification of art forms,” Shigematsu says. “More and more, I think the museum is becoming the focal point of diverse activities. It’s not just art galleries—almost half of museum programs nowadays are non-gallery spaces for education, engagement, and events.” The Whitney’s new space in the Meatpacking District offers a prime example of this phenomenon, with its focus on space that can be easily adapted by artists trying to experiment and stretch the limits of their practice.
Shigematsu also ties this trend back to the proliferation of art world events, such as biennials and art fairs, “that are more engaging than static buildings,” he says. “Every year or two years, you have an activation of the whole city, not just a museum. So I think the role of art as social currency is changing to focus more on ephemeral, event-based ambitions that accommodate diverse needs.”
That’s particularly important in a city like Miami, where the art scene has only recently come into its own. Although it is understandably difficult to compete directly with the iconic, world-class museums of New York, the Faena Forum offers a different path to art world relevancy. “We are more and more experiencing this kind of commission where it’s not just a gallery,” Shigematsu explains. “Instead, it’s a very multifunctional space that has event capabilities beyond just art. You could say that the Forum enhanced that approach and made it into a new typology.”
Faena’s wife, Ximena Caminos, a former curator who serves as the Forum’s executive director, echoed those sentiments last year in an interview with the New York Times. “Miami doesn’t need one more museum,” she said. “It needs something different. The Forum is designed to be flexible. I compare it to a sports car. If you want to turn the wheel, you can.”

Advertisement
Shigematsu admits that there is some tension in creating this sort of multidisciplinary, event-friendly space while also trying to avoid bland architectural anonymity. “Such an open-ended definition is, of course, a bit difficult as an architect,” he explained. “You want to make a place that’s so flexible that anything could happen, but if you make such a thing, it tends to be very black box-like. We, of course, didn’t want to do that, either.”
For the Faena Forum, OMA addressed this conundrum by designing a building composed of two connected volumes: a cylinder and a cube. The cylindrical portion houses a ribbed dome with an oculus, echoing historical structures like a Buenos Aires opera house and more classical designs like the Pantheon. The adjoining cube has a more contemporary feel, with a flat ceiling and a full wall of windows that face the creek next door. These contrasting spaces together serve as a 900-person venue (Madonna will perform on December 2nd as part of a benefit gala for her nonprofit, Raising Malawi), but they can also be divided into separate rooms for simultaneous events.
The Forum—and the surrounding Faena District—was inaugurated this past Sunday with Tide by Side, a performance-cum-parade inspired by Caribbean carnivals, featuring more than 30 cultural institutions from South Florida. On Tuesday, a lecture by Iranian philosopher Reza Negarestani reflects the Forum’s multidisciplinary approach to programming. And performances on Monday and Tuesday nights see Shigematsu’s involvement come full circle: The architect devised a show of light and shadow that imagines what the space would look like if there were no internal wall blocking the building’s distinctive pattern of windows. Drafting 30 dancers from the Miami City Ballet School, choreographer Pam Tanowitz created a dance that reacts to the shifting light.
“I had a whole spectrum of involvement with them, starting from branding and then ending up with scenography design, not just building,” Shigematsu says. “That engagement goes beyond the typical relationship of client and architect, and I think that was key to conceiving this kind of new cultural center. Because culture, of course, is very different in different cities and for different people. It’s such an open-ended word.”
Abigail Cain
Related Stories 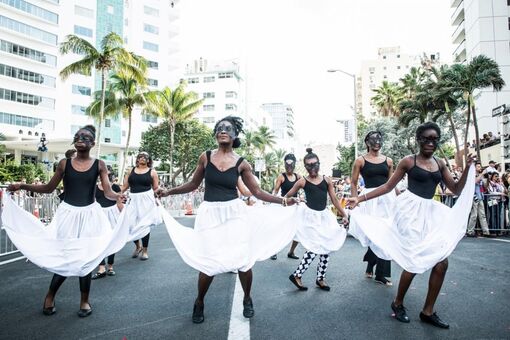