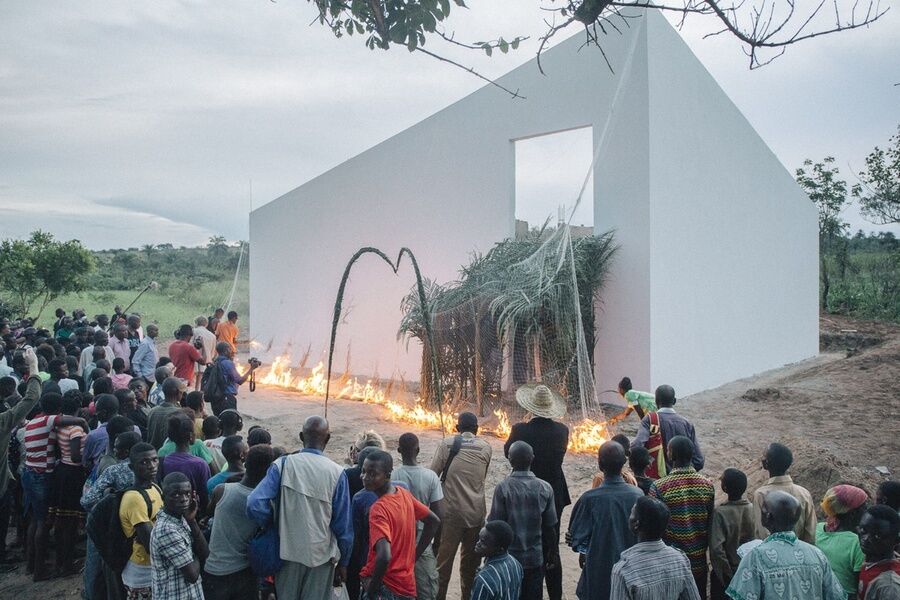 Installation view of The repatriation of the white cube. Photo © Thomas Nolf. Courtesy of LIRCAEI.

On April 21st, some 2,000 people gathered around a white cube gallery on a former palm oil plantation in the far reaches of the Congolese forest. A white fishing net draped around the building was set ablaze in an opening ceremony, followed by performances, discussions, music, dancing, and a great feast. The festivities marked the inauguration of the Lusanga International Research Centre for Art and Economic Inequality (LIRCAEI), a joint initiative of the
Cercle d’Art des Travailleurs De Plantation Congolaise
(the Congolese Plantation Workers Art League, or CATPC) and the Amsterdam-based Institute for Human Activities (IHA).
This space, a white cube gallery and international research center, designed by the Office for Metropolitan Architecture (OMA), might seem a surreal construction for Lusanga, an area where most families live on about $20 to $30 per month, but the location is crucial. Dutch artist
Renzo Martens
, founder of the IHA, emphasizes that LIRCAEI proposes a reversal of the flow of global cultural capital, by supplanting the white cube into an area that has, through colonial plantation labor, historically underwritten such structures.
The geographic remoteness of LIRCAEI belies the area’s link to the international art world and the systems that sustain it. In 1911, the British soap company Lever Brothers confiscated this land, Lusanga, formerly known as “Leverville,” at the behest of the Belgian colonial government. The Levers established their first palm oil plantation and imposed a system of forced labor. The profits from this “very savage type of capitalism,” Martens says, funded the prolific art collection of Lord William Hesketh Lever, and filtered into the art-world philanthropy of Unilever, the multinational corporation we know today. 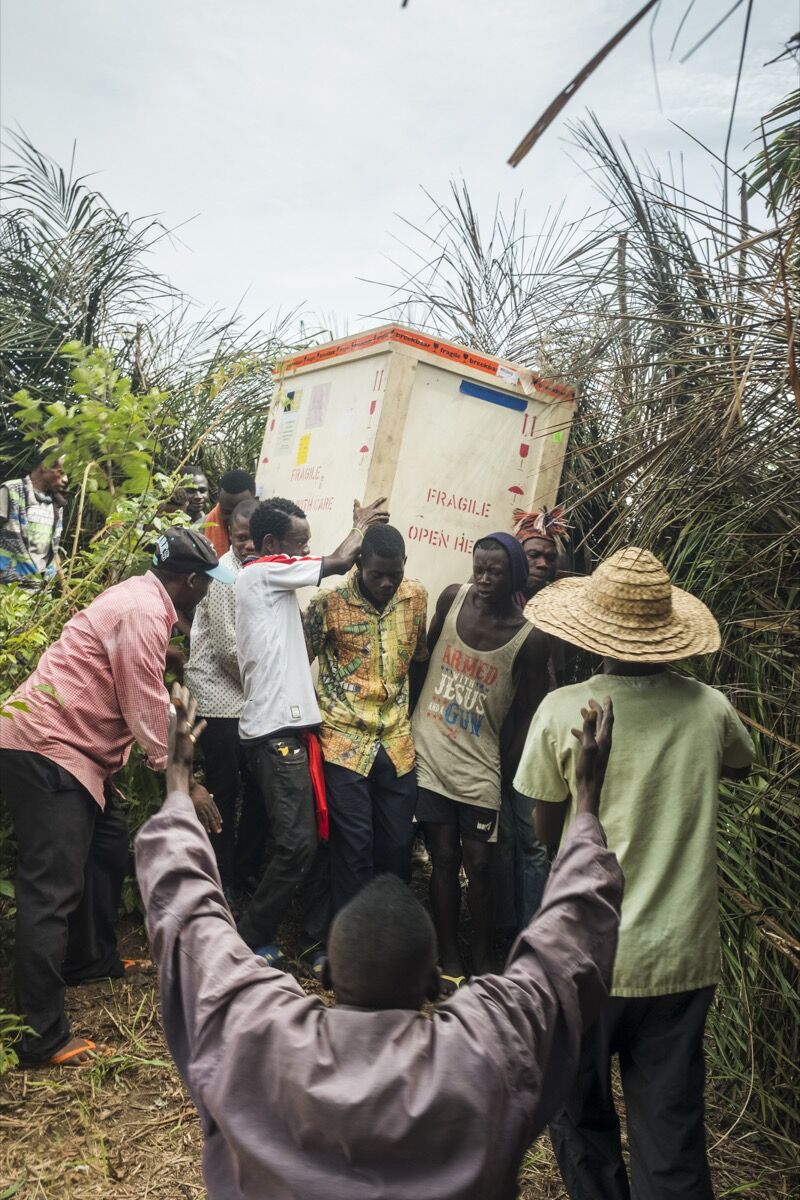 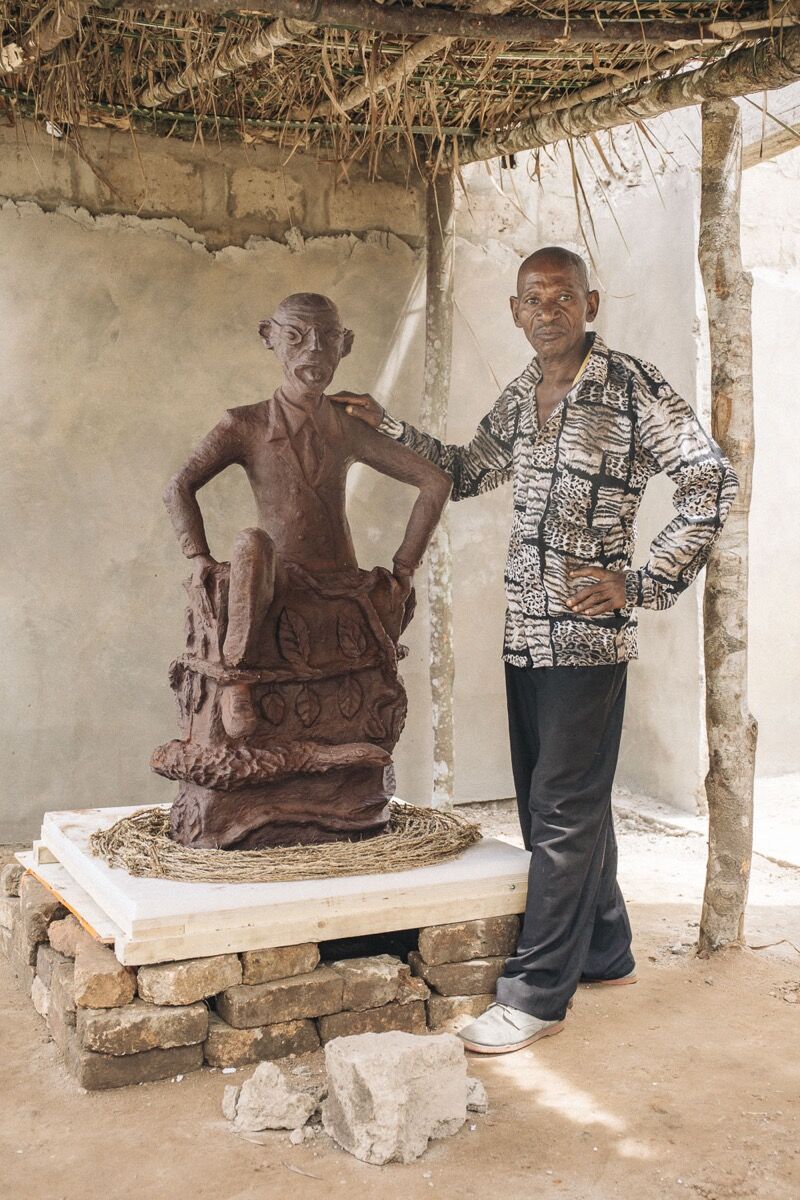 The Unilever Series of commissions for the Tate Modern’s Turbine Hall is just one example of how the residual wealth of colonial exploitation buttresses contemporary art production, and, more generally, how the cultivation of “high” taste bears inextricable links to the violence of the plantation even as it distances itself from it. “If Unilever is happy to fund
Louise Bourgeois
at the same time they are contributing to the extermination of the orangutans in Indonesia,“ Martens explains, “there is a clear link.”
The inaugural exhibition at LIRCAEI, titled “The Repatriation of the White Cube,” mixes artists with direct experience of working on a plantation, along with names that are familiar in the highest echelons of the monied international art world—the world of the “white cube.” The show intermingles artists of CATPC, like Irene Kanga, Mathieu Kasiama, Jérémie Mabiala, and others with
Luc Tuymans
,
Kader Attia
,
Marlene Dumas
, and one-time Unilever Series commission recipient
Carsten Höller
. Significantly, authorized prints of two paintings from Tuymans’s series addressing the Belgian colonial history in the Congo, first shown at the 2001 Venice Biennale to much acclaim, are on view at LIRCAEI, hanging upside down, to be viewed through Höller’s Upside-Down Goggles (2005).
“It is not enough to simply open up the white cube to artists from the [Global] South,” explains Martens, “because in the end that apparatus is still at the service of an art world and an economic system that extracts profits from these very plantations, mines, and sweatshops.” Art that addresses global inequality and critiques capitalism, Martens argues, has little real impact when it is shown in those same centers of global capital—New York, London, Berlin—and is financed by those systems. Critical art becomes ineffective and “sterile” if it is only seen and discussed in centers of wealth, thereby generating cultural capital in already rich places. 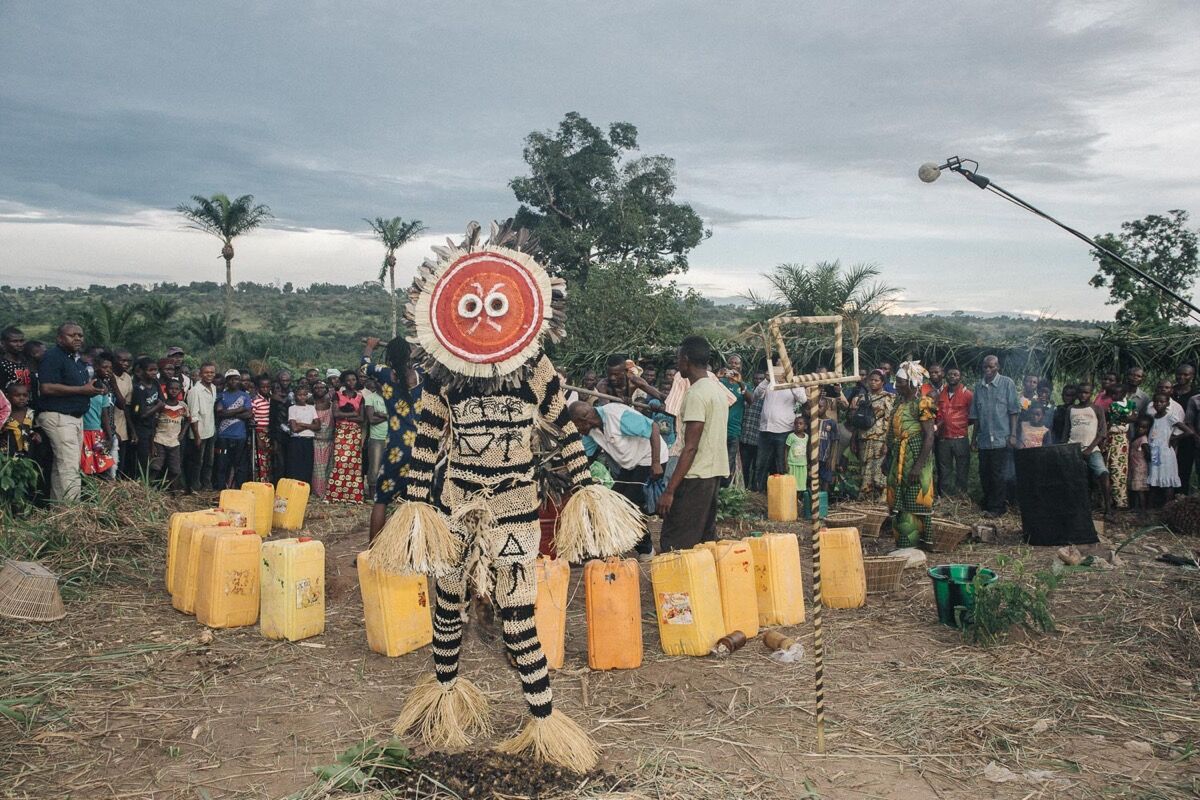 Advertisement
As such, Martens has referred to his efforts in the Congo, which have come to a conclusion with “The Repatriation of the White Cube,” as a “reverse gentrification project.” “If critical art can attract capital and create hipster towns,” he says, “then we have an obligation to figure out where, with whom, and for what it’s going to be.” It’s doubtful that Lusanga will become the next Williamsburg, but the gentrification analogy is an intriguing one.
The project has a bit of a “if you build it, they will come” optimism to it, but the material effects are already apparent. The chocolate sculptures produced by the CATPC (which were recently on view at New York’s SculptureCenter) and sold on the international art market have contributed significantly to the artists’ livelihoods, increasing wealth and opportunity in the region. Some 60 people are now making a living off of the activities of the CATPC, though Martens estimates that that number could be as high as 500, when considering the families they are supporting.
“Culture and the arts are not simply an important dimension of social well-being, they are also a factor in economic development,” says René Ngongo, environmental and political activist and president of the CATPC. The opening of LIRCAEI, Ngongo continues, “provides a glimmer of hope for a post-conflict country and an agro-ecological zone that passively watched on as Unilever collapsed and as its infrastructures progressively fell into decay.” The effects of the visibility and capital generated by the opening of the white cube will enable plantation workers to buy back land and create ecologically sustainable “post-plantations.”
Currently, the funding for LIRCAEI as a joint program is provided through proceeds from the sales of works by the CATPC as well as funding secured by the IHA. Their task is cut out for them, however, to continue to translate visibility into capital, and to keep the wider art world’s attention beyond the excitement of the grand opening. 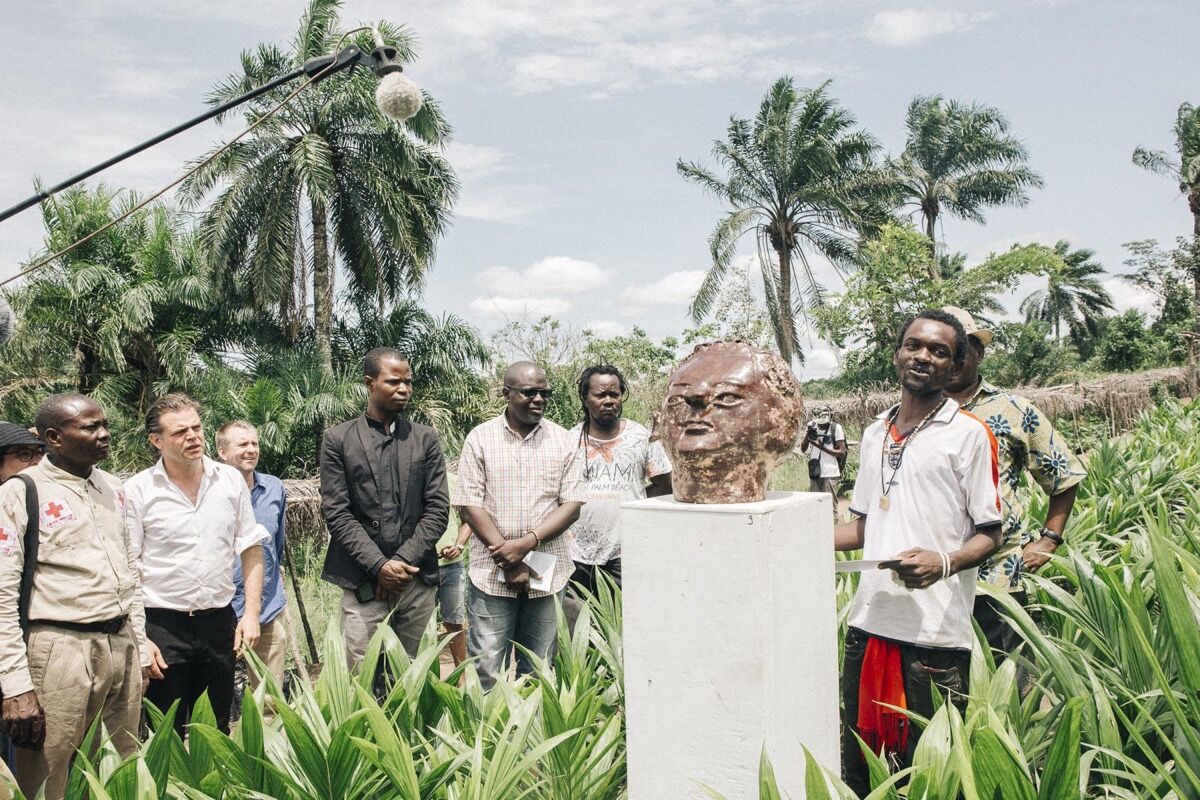 For an art world only recently shocked out of a pervasive state of complacency and cynicism by recent geopolitical shifts, however, this project displays a real sense of faith in the transformative power of art. “I do believe in art,” says Martens, “and I do believe that the white cube, as the quintessential exhibition space, if strategically used, can make a difference.”
The white cube is a tool, he maintains, for not only the validation, visibility, and the generation of capital in the service of a broader economic and ecological project, but for what he calls “criticality, love, and singularity.” It may sound like an overtone of art-world evangelism rings loud and clear in his words, but the concept behind LIRCAEI is grounded in critical theory and so far has demonstrated some real-world effects.
“We are simply liberating institutional critique,” Martens says, “making sure it actually works.”
Natalie Hegert
Related Stories