On the Anniversary of 9/11, Will Ryman Confronts Industrial Dehumanization and bin Laden’s Death 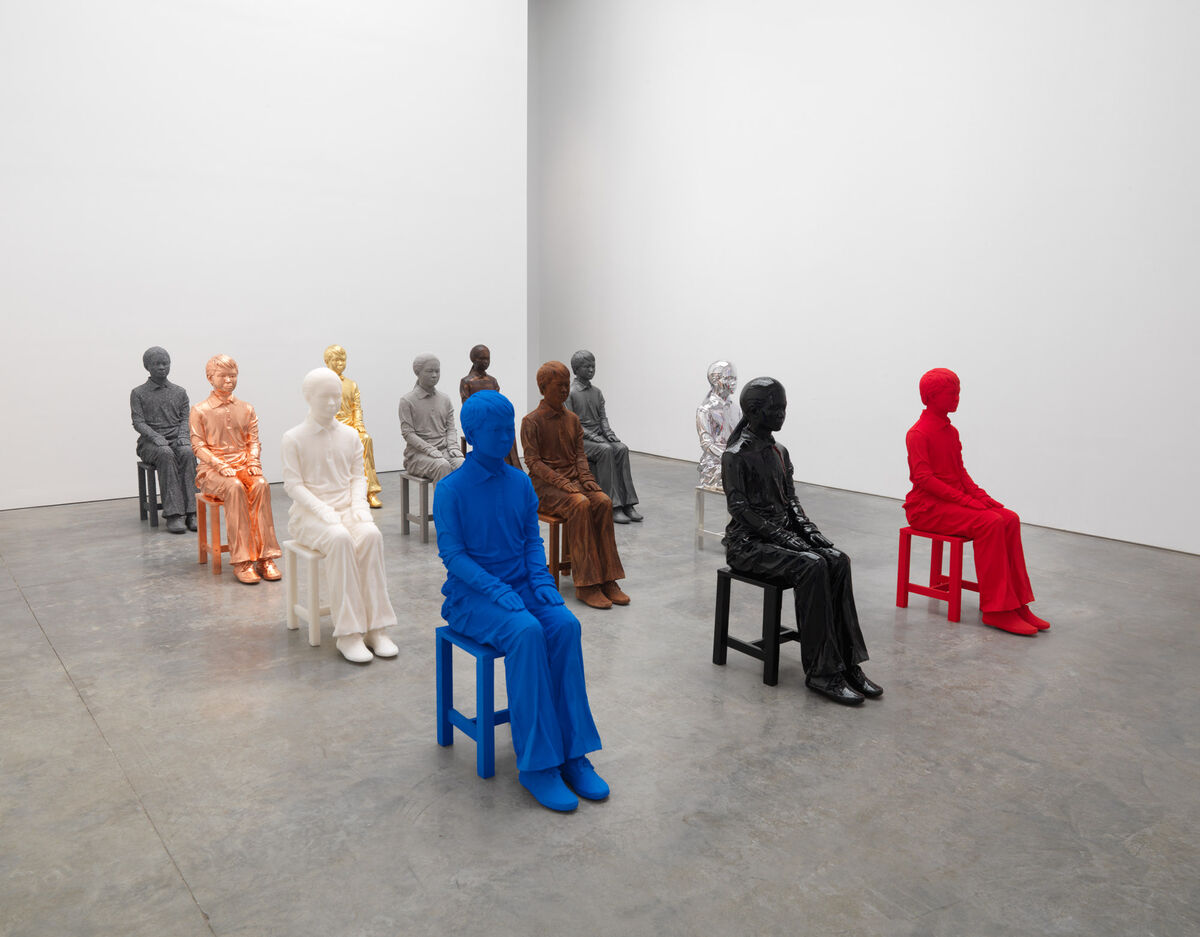 In an easy-to-miss building where Chinatown blends into the Lower East Side in Manhattan,
Will Ryman
works in a multistory studio, turning out sculptures and installations that stem from his need to understand the world. Piles of books line a back room filled with the notebooks and collages he uses to develop his ideas. Though there are art books interspersed in these piles, they are mostly composed of volumes on history, politics, and current events, as well as the biographies and the writings of such infamous figures as Sayyid Qutb and Ayman al-Zawahiri. “Basically everything I’ve done with art has always been my own exploration into trying to figure out why things are the way they are,” Ryman told me during a recent visit. “I’m interested in very complex situations in the world that I don’t understand, that usually bring up a lot of fear in me. And I try to break them down into their elemental parts so that I can try to understand the world better.” 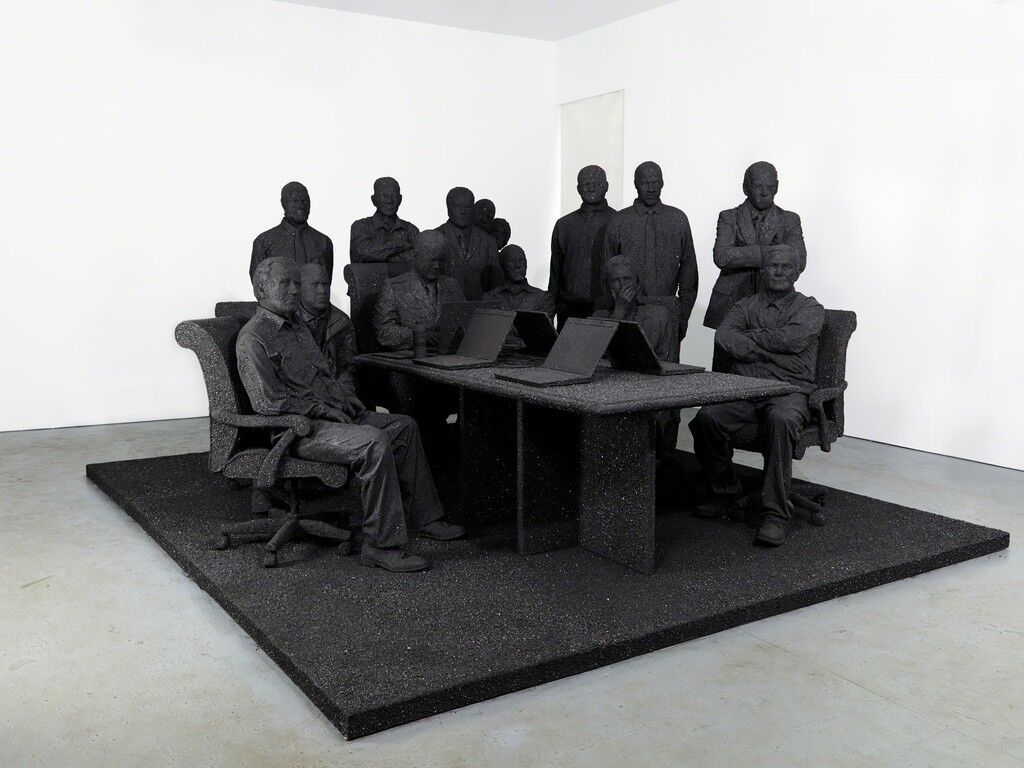 Will Ryman
The Situation Room, 2012-2014
Paul Kasmin Gallery
Absent from the studio and at the time, en route to Paul Kasmin Gallery, are two of Ryman’s most recent efforts, sculptural installations titled The Situation Room (2012–14) and Classroom (2015), now on view in “Will Ryman: Two Rooms,” a focused solo exhibition, coinciding with the 14th anniversary of September 11th. This timing is not coincidental. In both pieces, Ryman addresses forms and abuses of power and the ramifications of globalization and industrialization. For The Situation Room, his catalyst was a news photograph seen around the world, showing the Obama administration and U.S. military leaders gathered together tightly around a table to witness on screen and in real time the Navy SEAL capture and killing of Osama bin Laden in 2011. “When I saw the photograph I knew right away that I wanted to do something with it,” he recalls. “I guess seeing it, I felt a little bit manipulated by it. I found myself asking more questions than I’m used to when I see a photograph: Why was this taken? Why is this being printed? What is to gain by seeing it? Was it staged? It made me wonder what goes on [behind-the-scenes].”

Advertisement
Composed of crushed coal, The Situation Room is a life-sized re-creation of this photograph. Ryman explains that he chose coal as his medium, because of its “Pompeii-type quality, a mass-destruction type of quality, a historic feel to the material itself. It also has to do with energy, power, expansion, and the industrial revolution.” Coal also proved to be an effective means of neutralizing the specificity of the photograph and the people in it. Though the faces of such frequently photographed leaders as President Obama, Vice President Biden, and former Secretary of State Hillary Clinton are readily recognizable, Ryman generalized the faces of the majority of the figures. This removal of individuality, coupled with the monochromatic blackness of the entire ensemble, creates an appearance of uniformity and suggests that, as Ryman puts it, “all those people are interchangeable and they rotate.” His abstracted presentation of a specific historical moment further indicates that the situation itself is hardly unique. Leaders (and despots) come and go, and weapons and methods change, but politics and war have always been a part of human existence. “These situations keep repeating themselves,” says Ryman. “Why is this any different from any other situation that’s been going on for decades and will continue to happen?” 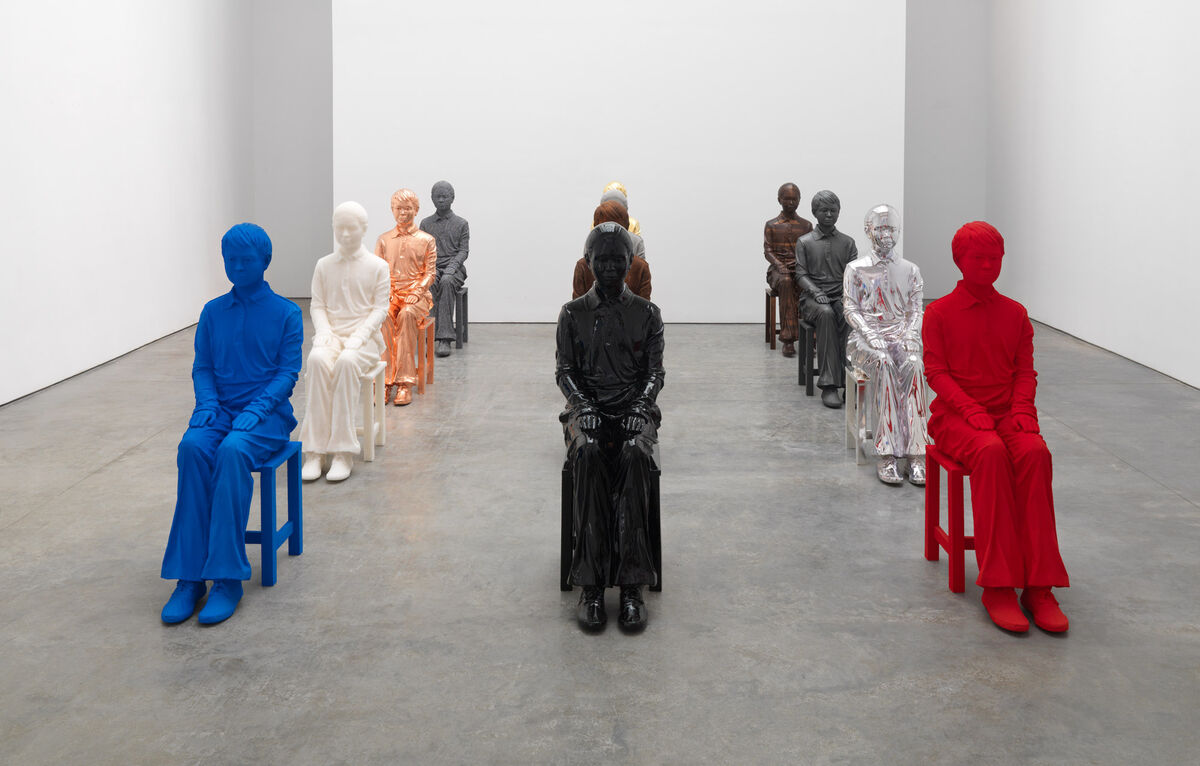 Will Ryman
Classroom (detail), 2015
Paul Kasmin Gallery
For Classroom, Ryman began with a multitude of photographs, found through online image searches. “I was typing in ‘mass production,’ ‘factories,’ ‘factory labor,’ ‘workforce,’ ‘factory workers,’ ‘schoolchildren,’ ‘public education,’” he relates. He was looking for pictures of laborers and students from around the world, intending to merge their faces and bodies into a single composite figure. The figure he came up with has an expressionless, youthful, and gender- and ethnicity-neutral face and sits stiffly upright in a chair, its legs together, its hands placed neatly on its knees. The artist cast a total of 12 of these figures, all from the same mold, adding ponytails to six of them to make them female. They are arranged in a rectangular grid, which Ryman says is meant to evoke “an assembly line, or a classroom, or a military formation.” 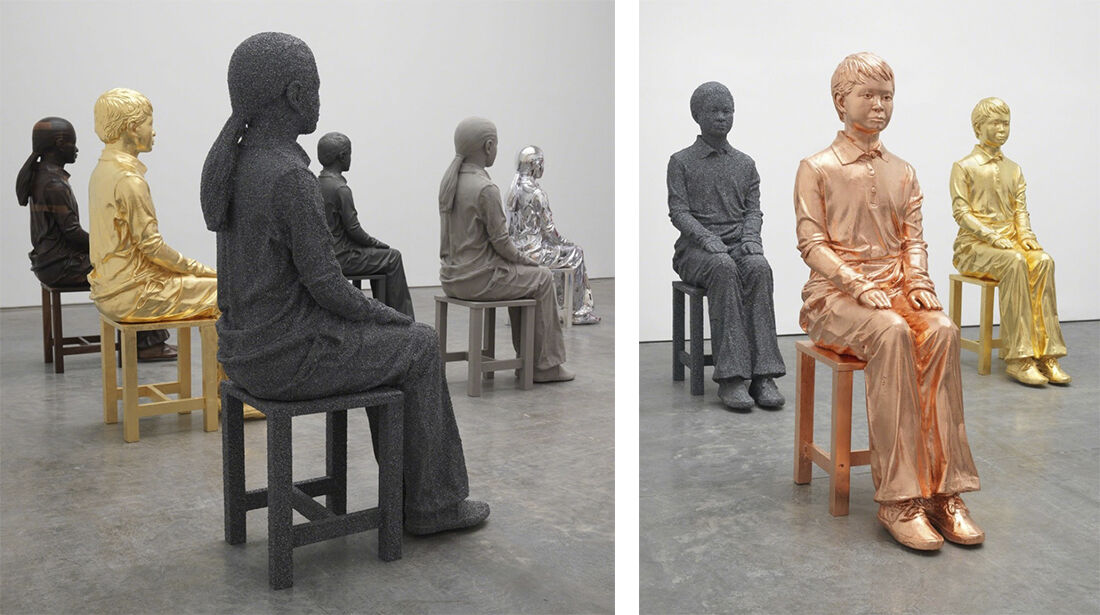 But while the figures in Classroom have an identical form, each one is made out of a different material upon which economies worldwide depend. “I wanted to choose from the Periodic Table of Elements,” Ryman explains about his selection of materials. “Ones that I felt were significant to building the economy: oil, salt, iron, wood, titanium—you know, for weapons and hips—silicon for computers, gold, copper.” With their distinct coloring and finish, these materials alone differentiate the figures, as well as set up an uncomfortable equation between human beings and commodities. “When I was making this I was thinking of a worldwide business model and how humans are as important a resource as salt or gold,” says Ryman. “I wanted to objectify the figures to play with the relationship between commodity and human to see if there’s a difference.”
In both The Situation Room and Classroom the artist recognizes the power not only of political and economic systems, but also of art. “From the beginning of any kind of society or civilization, there has been art…. And it’s communicating and reflecting everything going on in a culture that can’t really be spoken about,” he says. “I think that’s really what art does, and you can’t beat that. It’s the best thing that humanity has to offer.”
Karen Kedmey
“Will Ryman: Two Rooms” is on view at Paul Kasmin Gallery, New York, Sept. 10–Oct. 17, 2015.
Follow Paul Kasmin Gallery on Artsy.
Related Stories