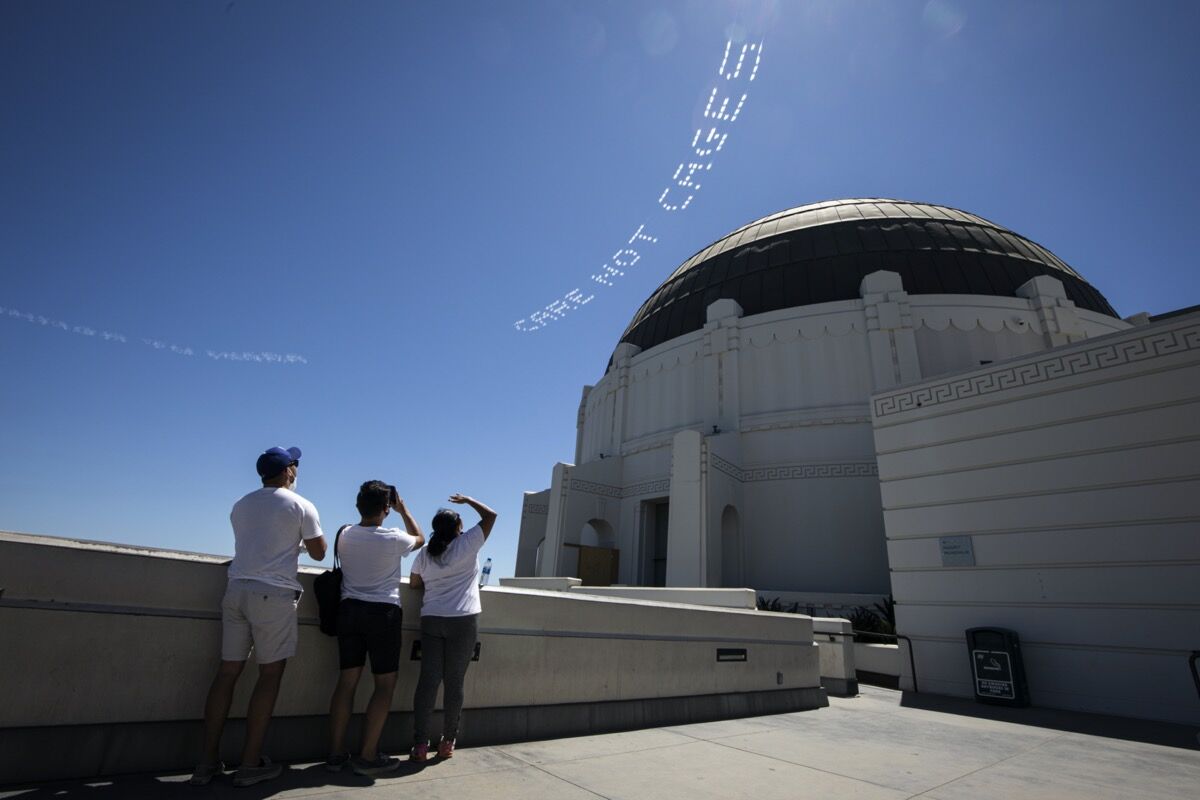 Patrisse Cullors, CARE NOT CAGES #XMAP, over LA County Jail on July 3, 2020, as part of “In Plain Sight.” Photo by Chris Mastro. Courtesy of In Plain Sight.

Ahead of this year’s holiday weekend, 80 artists have banded together to illuminate the fact that not all those who live in the United States experience the freedom and liberty celebrated on Independence Day. Organized by visual and performance artists
Cassils
and
rafa esparza
, XMAP: In Plain Sight draws attention to the nation’s history and current reality of detainment by writing messages in the sky above specific sites throughout the country.
I am one of the 80 artists, including
Emory Douglas
,
Hank Willis Thomas
,
Dread Scott
, Patrisse Cullors,
Zackary Drucker
,
Beatriz Cortez
, and
Sky Hopinka
, among others, who were asked to create messages of hope and rage to be skytyped over detention centers, immigration courts, borders, and sites of former internment camps, the majority of which exist in California, Arizona, Texas, and Louisiana. 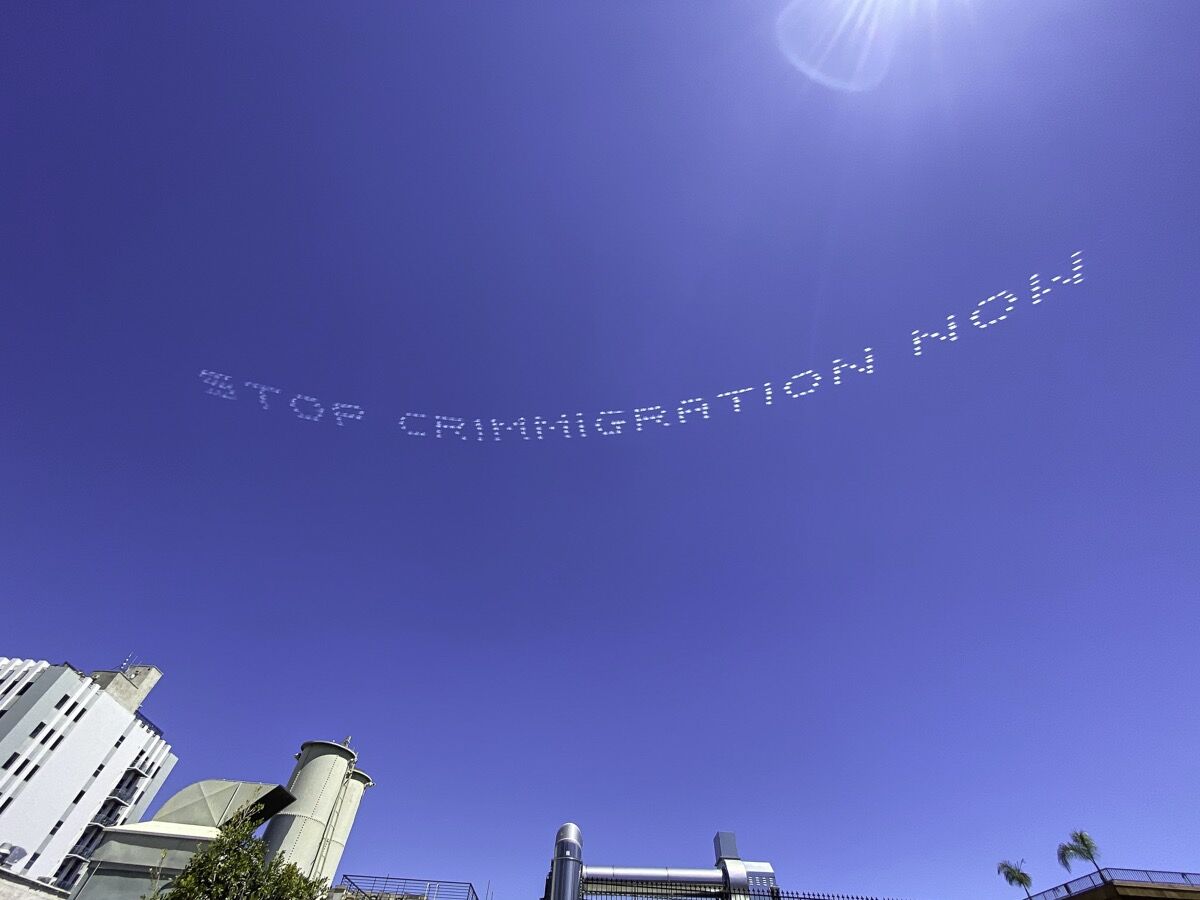 Bamby Salcedo, STOP CRIMMIGRATION NOW, over LA Field Office on July 3, 2020, as part of “In Plain Sight.” Photo by Dee Gonzalez. Courtesy of In Plain Sight.

Described as “a precisely orchestrated, moving, and poetic elegy on a national scale,” this ambitious project has five functions and several moving parts. Compressed into a 15-character limit, our messages will not only be scrawled across the nation’s atmosphere but will also exist online, in a docuseries, and as an interactive augmented reality application developed by artist Nancy Baker Cahill that will allow users to see the messaging long after it has disappeared.
In addition to drawing attention to these sites, XMAP: In Plain Sight also seeks to inspire action, helping the public imagine what they could do to join the movement against immigrant detention and participate in arts-related initiatives.

Yosimar Reyes, CHINGA TU MIGRA, over LA Metropolitan Jail on July 3, 2020, as part of “In Plain Sight.” Photo by Dee Gonzalez. Courtesy of In Plain Sight.

Advertisement
According to fellow participating artist Zackary Drucker, artists are uniquely qualified to challenge systematic oppression and enable social change in creative and innovative ways.
“As a trans person, I’m part of an expansive network of trans and non-binary people in Los Angeles, many of whom are undocumented and many of whom came here as refugees from their countries where they faced persecution and death for existing,” Drucker said to me in an email. “Many of my friends who made the journey here and got refugee status are now citizens.”
Project organizers Cassils and esparza have shared their relationship to the tenuous categories of migrant and citizen. At our first gathering, esparza spoke to his experience as the only son in a migrant Mexican family of five brothers that had not been incarcerated. Cassils, meanwhile, shared their eye-opening insights as a Canadian national struggling for almost a decade to be a U.S. citizen. 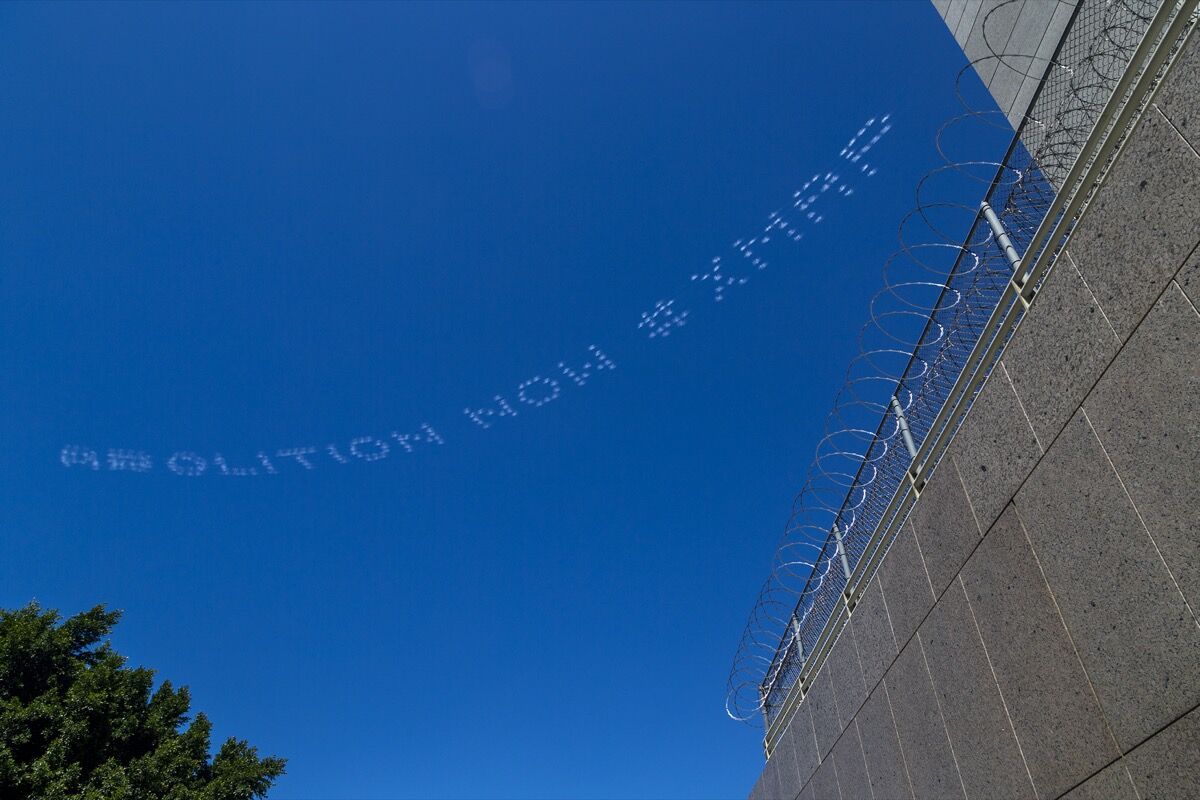 Ken Gonzales-Day, ABOLITION NOW #XMAP, over LA Immigration Court on July 3, 2020, as part of “In Plain Sight.” Photo by Davis McNew. Courtesy of In Plain Sight.

For other artists such as poet Javier Zamora, the experience of migration and detention is all too familiar. Zamora’s last book of poetry, Unaccompanied, charts the story of his crossing into southern Arizona at the age of nine as an unaccompanied minor. His message will appear over the U.S. Border Patrol Central Processing Center (a.k.a. the Ursula Detention Center) in McAllen, Texas, where his aunt was processed in the early 2000s.
“I thought of myself as a person who was ‘versed’ in immigration,” he said. “When I look at the numbers, I’m still flabbergasted at the amount of people that are in detention centers, the amount of money spent to keep people incarcerated. It baffles me.” 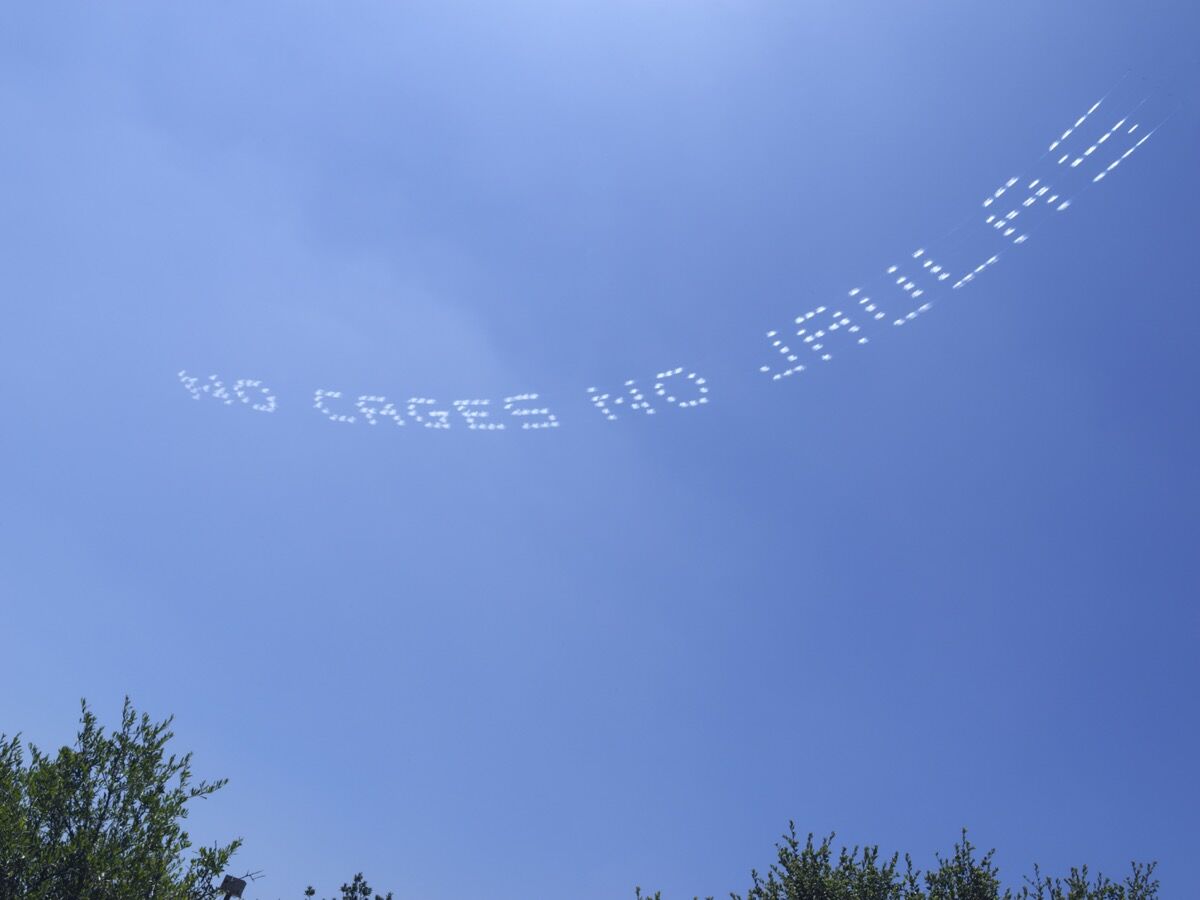 Beatriz Cortez, NO CAGES NO JAULAS, over Olive Street Immigration Court in Los Angeles on July 3, 2020, as part of “In Plain Sight.” Photo by Dee Gonzalez. Courtesy of In Plain Sight.

Los Angeles–based artist Beatriz Cortez is also participating in the project. A professor of Central American studies, Cortez has made art about the ways in which migration opens up speculative dimensions, opening different places at once. Her work celebrates migration as a planetary force—especially for those who are forced to leave Central American countries.
“I’ve worked with Central American immigrants for a long time,” Cortez said. “I’ve listened to the testimonials children in detention have granted through the Flores settlement, and I’ve long been familiar with the conditions of detention centers. But I still learned a lot about how detention centers are financed and how much profit they generate.” 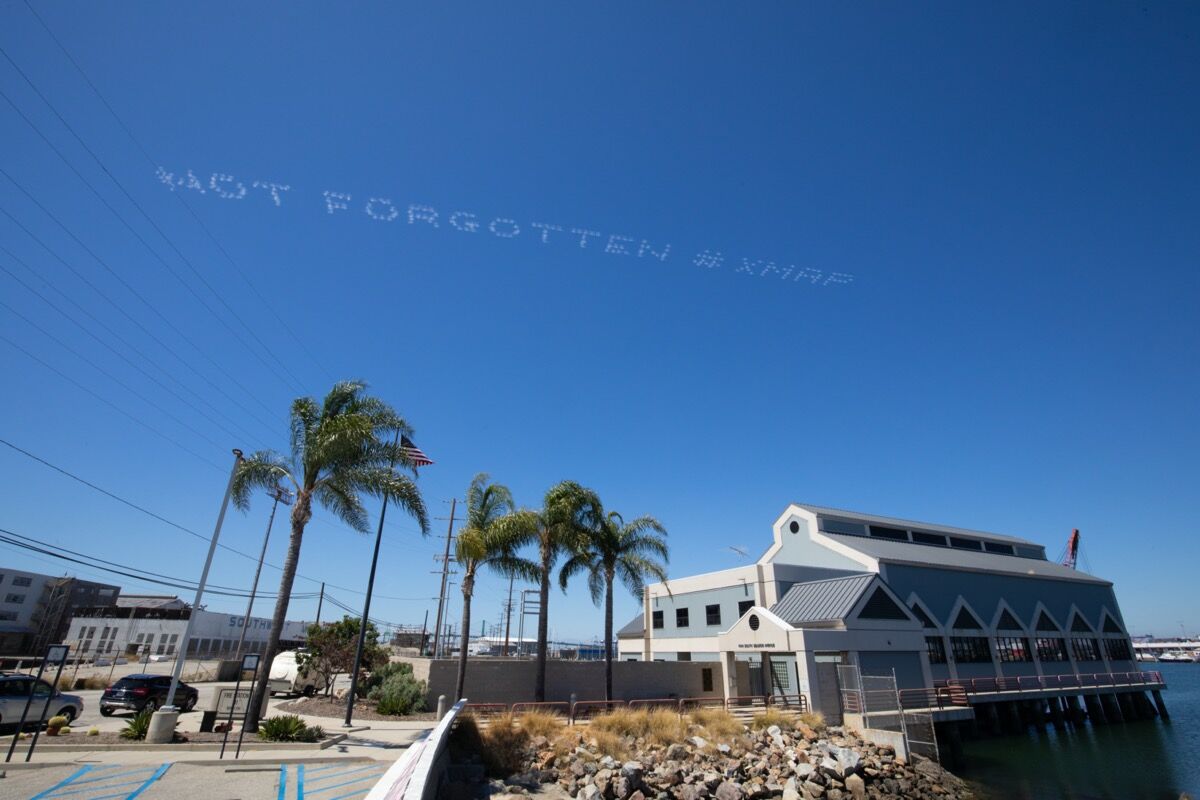 Tina Takemoto, NOT FORGOTTEN #XMAP, over Terminal Island in Southern California on July 3, 2020, as part of “In Plain Sight.” Photo by Mark Von Holden. Courtesy of In Plain Sight.

For Cortez, XMAP: In Plain Sight has given her the opportunity to continue collaborating with Central American organizations in Los Angeles like SALEF (Salvadoran American Leadership and Educational Fund), CARECEN (Central American Resource Center), NDLON (National Day Laborer Organizing Network), and MAYA VISION (language interpretation for indigenous Guatemalans) that have been fighting for a comprehensive immigration reform for almost 40 years.
“What’s been difficult to digest is that families have long been separated,” Cortez said. “What we’ve been experiencing as far as separation goes is far worse than a quarantine—our families have existed across screens away from each other for decades.” 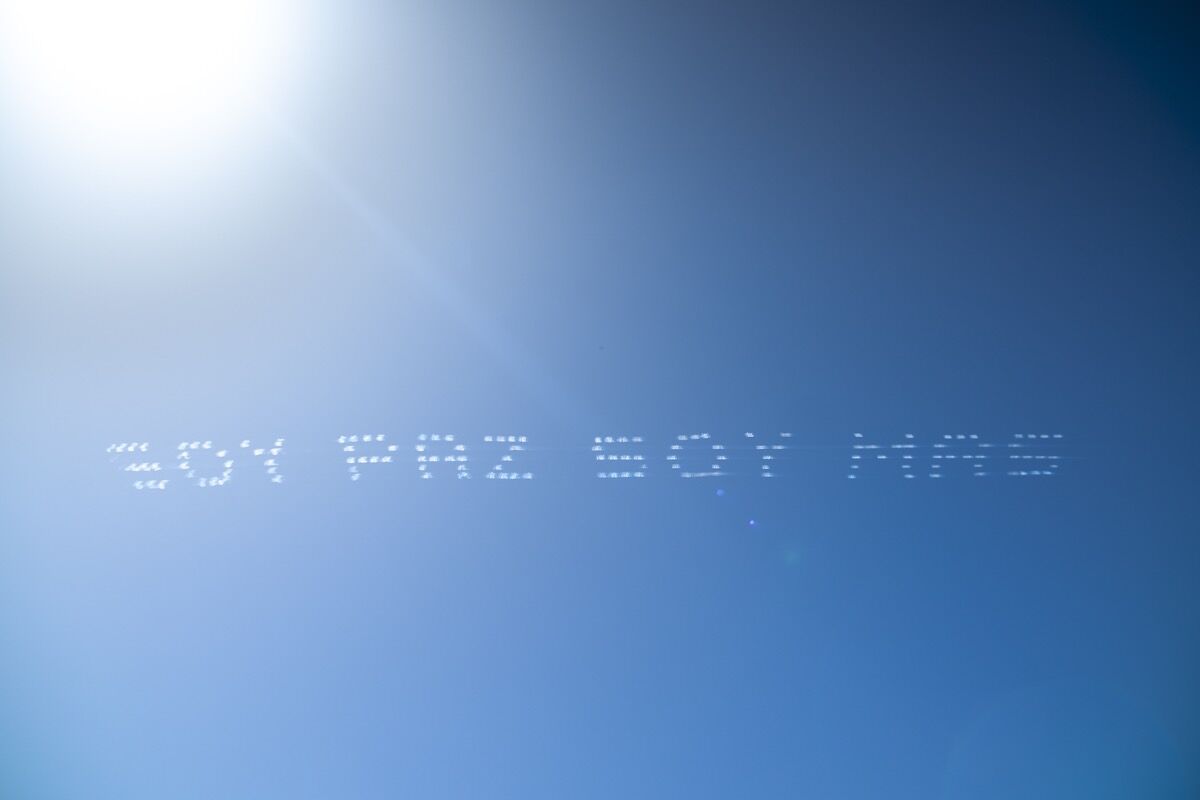 The outbreak of COVID-19 has shaped much of the project’s messaging in recent months. It’s been widely reported that the migrant community inside detention centers lacks access to basic supplies including soap, disinfectant, and face masks, making them among the pandemic’s most vulnerable populations. Last week, a federal judge in Los Angeles ruled that, due to the virus, the U.S. had until July 17th to release children from the nation’s three family-only detention centers.
While many considered it a victory, Texas-based immigration legal advocacy group and XMAP: In Plain Sight community partner RAICES (the Refugee and Immigrant Center for Education and Legal Services) pointed out that the ruling still gives ICE (Immigration and Customs Enforcement) all of the decision-making power to make these releases possible. In other words, ICE likely won’t take action. RAICES, through this project, urges voters to contact their state representatives directly to help initiate change. 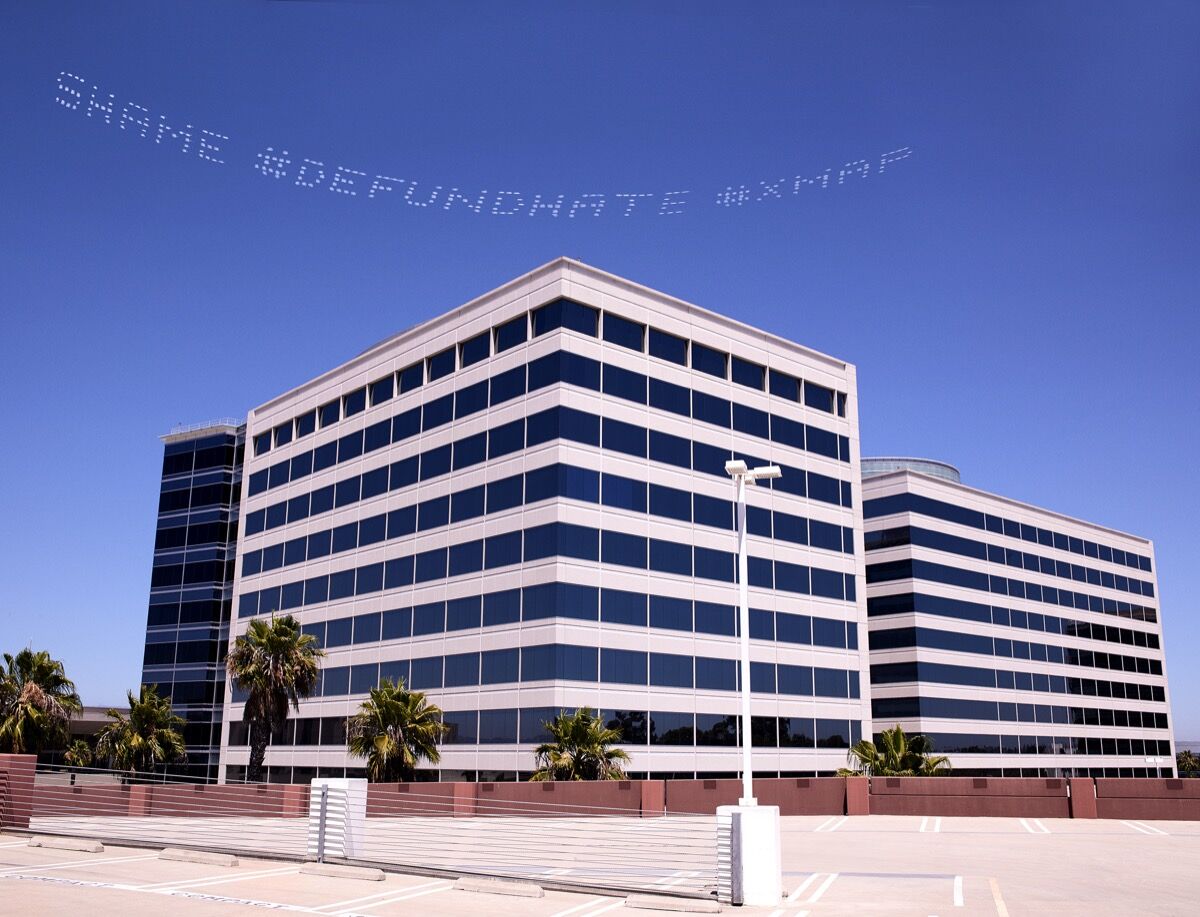 Cassils, SHAME #DEFUNDHATE #XMAP, over Geo Group Headquarters in Los Angeles on July 3, 2020, as part of “In Plain Sight.” Photo by Robin Black. Courtesy of In Plain Sight.

Strangely, the genesis of this initiative was the last time I found myself amongst fellow artists before city and state government leaders issued shelter-in-place orders. Large-scale initiatives like these, which involve such a diverse cast of artists, require serious community building in order to commit not only to the project, but to each other as well.
It was in these organizing meetings where esparza led us in a walking meditation over an elevated sandbox, directing a group of about 40 of us to engage in several intimate, sensorial dyads. We stared into each others’ eyes, created sculptures with each others’ bodies, and inhaled each others’ essences, as if we were mining one another for olfactory memories. We had all assembled with the collective desire to end the carceral logic that invented the need for detention centers as well as prisons, jails, and youth authority centers; to retrieve those who have been taken away from their families and communities. That desire is now animated by the urgency to free them all before the deadliest virus since AIDS arrives at any one of our doors. Looking up at the Fourth of July sky far from one another merely reinforces the need to continue looking out for one another.
Raquel Gutiérrez
Related Stories