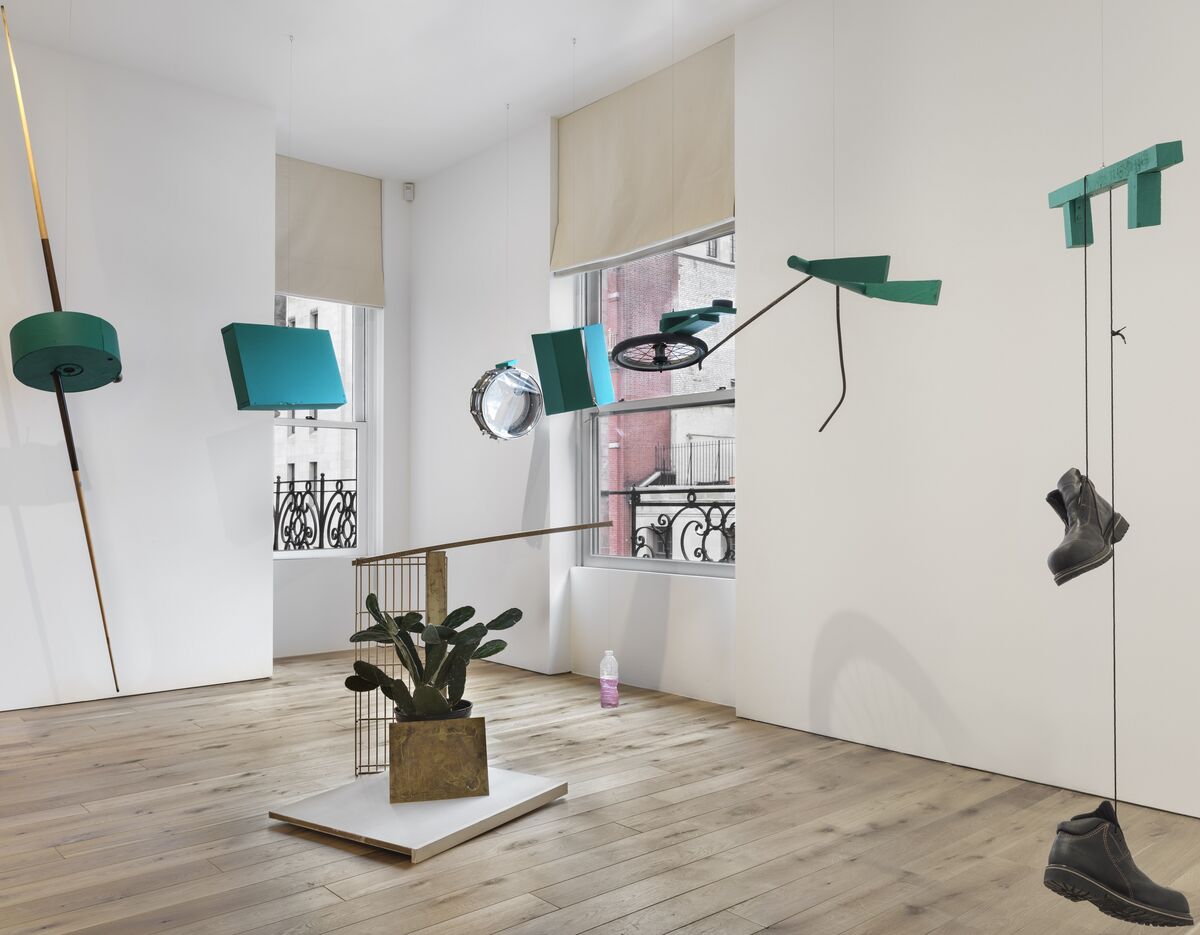 On a recent spring morning at Kurimanzutto’s new project space on New York’s Upper East Side, a couple of visitors took in a show by
Abraham Cruzvillegas
, ducking and weaving between the hot-pink wooden detritus suspended from the ceiling, while the gallery’s directors worked on laptops and the executive director pored over documents at two long, wooden tables. The shelves behind the table held artist’s books, two cratefuls of which were shipped from Mexico, as well as thick brown plates and bowls, pottery from the Mexican state of Oaxaca. On the countertop was a sleek espresso machine and an electric kettle.
The 2,200-square-foot space functions as both gallery and back-room office, café and archive, meeting point and storage facility—in short, exactly the kind of nimble, mutable space one might expect from a gallery with no fixed location for its first nine years.
Kurimanzutto is one of Mexico City’s most important galleries, with a roster that includes some of the country’s top artists, including
Gabriel Orozco
, who approached co-owners Mónica Manzutto and José Kuri in the late 1990s about starting a gallery to represent him and other Mexican artists of his generation (Manzutto and Kuri are also married). After holding a series of group shows in a local street market, Mexico City’s airport, and a movie theater, Kurimanzutto opened a permanent space in a former lumberyard in the now-posh Condesa district in 2008. This month, the gallery opened its first space outside of Mexico, illustrating the pull of a major art-world center, even as the industry becomes increasingly nomadic and multipolar.
“The gallery in Mexico City is far away,” said senior director Lissa McClure, “and as much as people love going there, and are going there with more and more frequency,” it made sense to have a space in New York. She cited “the number of curators from both the U.S. and abroad, and collectors who are visiting here.”
“It’s just a really nice way to make contact with people and have them here,” McClure added. The move comes even as Mexico’s own collector base is growing and strengthening. Manzutto remembers that, when the gallery first opened, “there was almost no market, maybe three collectors.” Now, the city has its own art fair, Zona Maco, as well as a gallery weekend; there’s also a growing art scene in the city of Guadalajara. But despite the growth, Mexican collectors still account for only about 25 to 30 percent of Kurimanzutto’s overall sales. And, Manzutto noted, museums in Mexico typically do not have significant acquisition budgets, making the U.S. an important region for placing works in institutional collections.
Manzutto said the decision to open a New York space came out of conversations with the gallery’s artists (there are 33 in all), about half of whom do not have representation in New York or the U.S. in general.
“As much as we do travel and we do participate in art fairs, it’s not the same kind of conversation,” said Manzutto. “The pace of the art fair is a very fast one, you don’t always have the space nor the time, which [makes it] even more important to talk to people deeply about artists.”
McClure said being on the Upper East Side, away from the bustle and density of Chelsea, also allows for more leisurely visits. The location is close to many of New York’s top museums, and the neighborhood is home to a small but critical mass of galleries, including a few others from Latin America, like Mexican gallery Páramo, or Brazil’s Mendes Wood DM and Galeria Nara Roesler.
Kuri said his team had looked at the Lower East Side, but realized that the gallery was not a part of the organic community that has sprung up there over the years. He described the Upper East Side location on East 65th Street, just off Madison, as “very neutral.” The neighborhood “gives us room to develop our own identity and not try to insert ourselves in certain identities,” Kuri said.
And, “the rent is much cheaper than downtown,” added Manzutto.
It is too soon to tell how having an additional site will impact the operations of the gallery, which has a staff of 32 employees across both locations. The directors do hope that having an additional gallery will allow them to spend more time in New York and slow down their own whirlwind travel schedules. Both Manzutto and Kuri lived in New York as master’s students, and feel at home here. Advertisement
Their plan for the first year is to do just two or three projects at the New York gallery, and use it as a base from which to scout additional locations for shows, if the space doesn’t fit a particular artist’s work. For now, Manzutto and Kuri aren’t anticipating cutting back on their fair participation, which, in a given year, typically includes Zona Maco, Frieze London, and Art Basel in Basel, Hong Kong, and Miami Beach.
Manzutto said she hopes the new space will be profitable, but acknowledged it was “a total risk for us.”
“But we want to take it, and we felt the right time was now, as much as it felt strange politically and economically,” she said.
It is off to an auspicious start. After being open for just one day, McClure said, the gallery had already sold some of Cruzvillegas’s works on paper.
Anna Louie Sussman
Related Stories