Garage Museum Is Documenting All of Russia’s Art 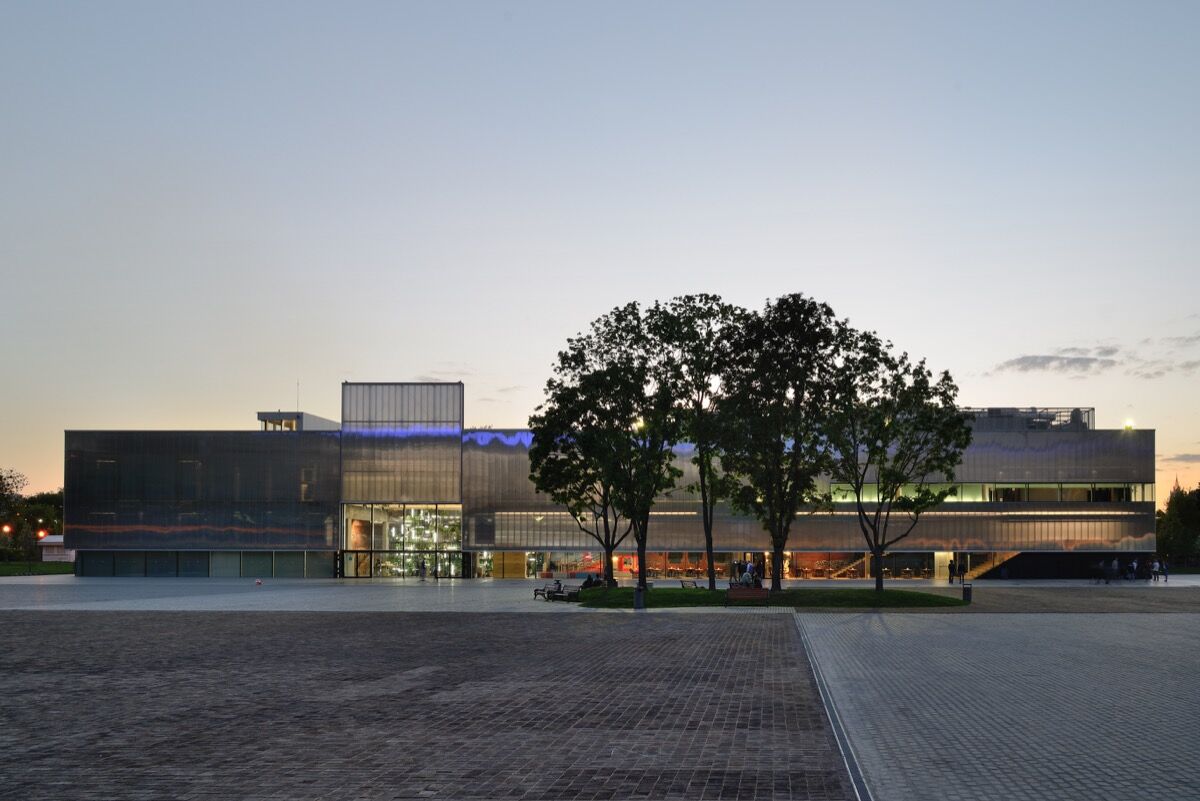 One hundred years have passed since the Russian Revolution, and several decades since the end of the Cold War. For many people today, however, Russia remains the same, the “riddle, wrapped in a mystery, inside an enigma” that Winston Churchill declared it to be in 1939.
But the Garage Museum of Contemporary Art in Moscow is on a mission to paint a clear picture of at least one reality of Russian life—the art that is being made across the country.
The museum’s most recent initiatives are also its most ambitious: the museum’s first Triennial of Russian Contemporary Art and a massive digital archive (currently under construction) that will document the country’s contemporary art. In the absence of a broad spectrum of arts institutions in Russia, and amid widespread censorship, the archive will fill a gap in the country’s cultural landscape.
On view through May 14, 2017, the Triennial fills Garage’s 65,000-square foot home—a long-derelict modernist structure built as a massive restaurant in Moscow’s Gorky Park in 1968 and redesigned by Dutch architect Rem Koolhaas in 2012—with works by 68 Russian artists and collectives made since 2012.
The exhibition’s launch in March was purposely timed to coincide with the centennial anniversary of the Russian Revolution.
“Just as the Russian Revolution spurred the first avant-garde,” writes Garage Chief Curator Kate Fowle in the exhibition catalog, “the Garage is hoping to spur the next.”
Part and parcel to that mission is expanding the field of vision outside St. Petersburg and Moscow to include all eight of Russia’s federal districts, from the Caucasus and Crimea (which was annexed by Russia in 2014) in the southwest, to the Urals in the country’s center and Siberia’s far-eastern Pacific coast. 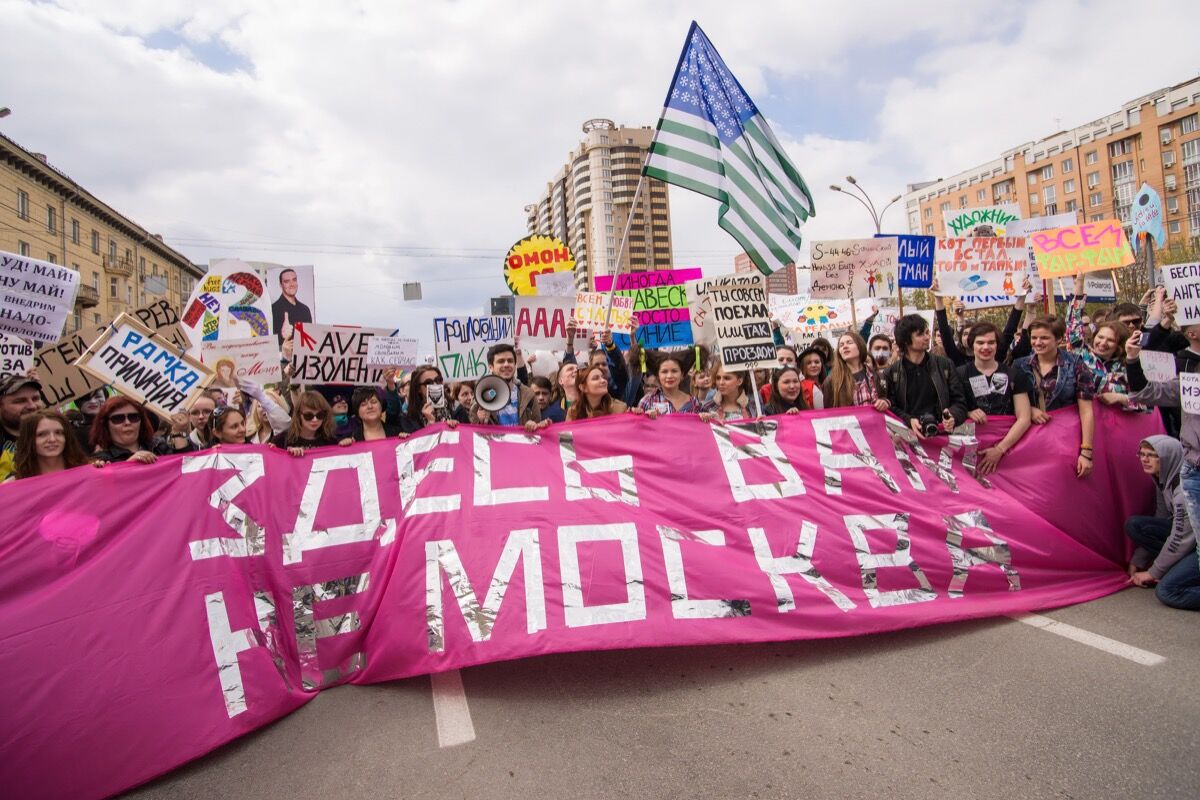 A hot pink banner with gold Russian lettering by Artem Loskutov, a 31-year-old artist from the Siberian city of Novosibirsk, just about sums it up. It translates to: “Here is not your Moscow.” (The banner was first used last year in Novosibirsk in a Monstration—a protest performance that takes place each May Day, spearheaded by Loskutov in 2004 and not looked on kindly by Putin’s government.)
“Some of the curators wanted to use that as the title for the show,” says Fowle, who was insistent that her curators visit towns far off the beaten path while researching the Triennial.
The process “sent each member of the team to unimaginable places—the kind you visit once in a lifetime by some sort of divine mistake,” writes one of the curators, Katya Inozemtseva, in the diary each member of the team was asked to keep of their journeys. (The curatorial diaries are available on the Garage website and are worth a read.)
“Sometimes we were told, ‘We don’t have any contemporary artists here,’” says the British-born Fowle, who divides her time between Moscow and New York. “But we know that where there is life, there is art, so I told the team of curators that they had to go anyway.”
While they did visit some places with little, if any, infrastructure or resources to support contemporary art—places like Simferopol, in Crimea—many still reported back about ambitious local curators and artists transforming abandoned buildings into art spaces, or building communities through art centers that don’t rely on state support. 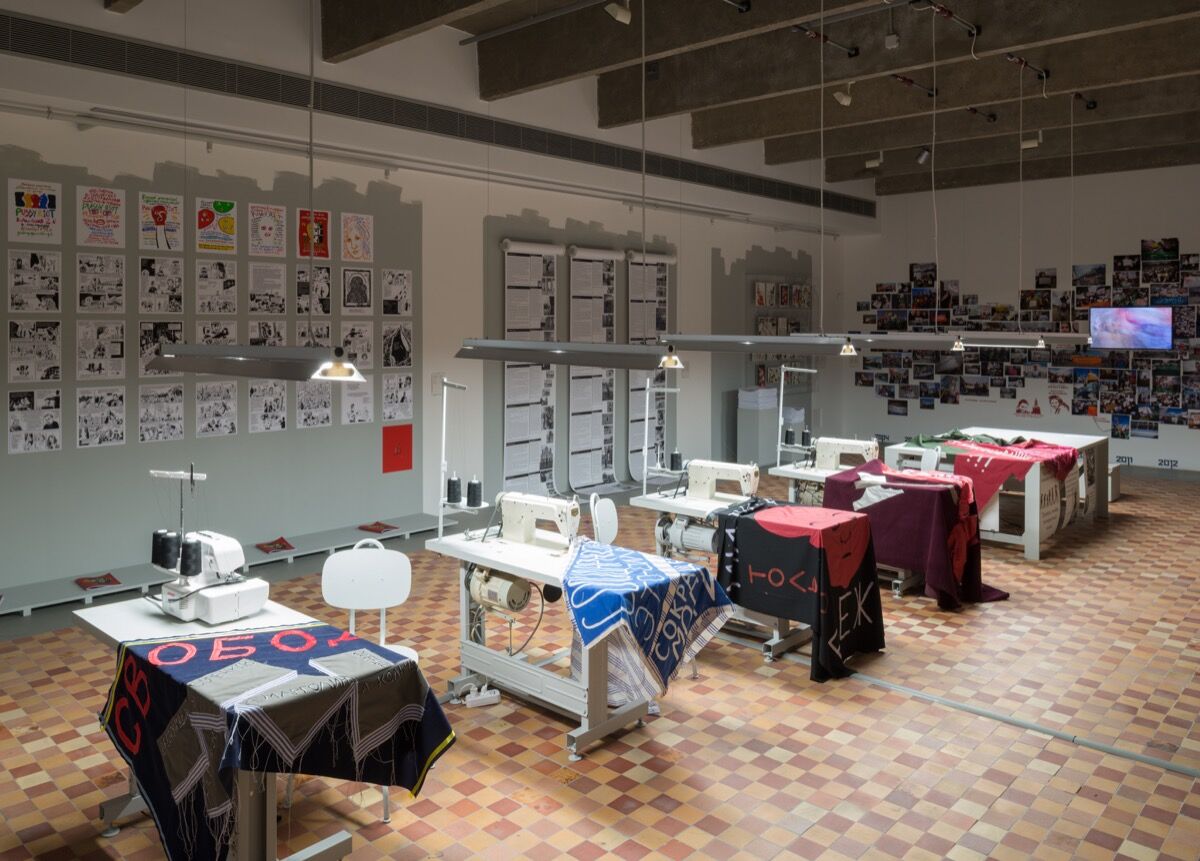 Advertisement
There are also quite a few artists included in the Triennial who have had access to a more robust, “unofficial” arts infrastructure in Moscow and St. Petersburg, through galleries, museums, and art schools.
But even in a country “that is so disparate and access to resources is so contrasted,” says Fowle, “there are artists thinking similarly—common threads.” The curators homed in on those threads, selecting seven “vectors” as the organizing principle of the Triennial.
“Master Figure,” for instance, features work by more established artists, like Kaliningrad’s Dmitry Bulatov, known for merging art and science, who has experimented with augmented reality for the Triennial. “Fidelity to Place” brings together artists whose work is inseparable from their surroundings, like Anastasia Bogomolova, whose contribution consists of photography and video performances that draw attention to Russia’s history of forced labor in the post-industrial Urals, where she lives.
“Art in Action” includes the ongoing performance 12-Hour Workday by the Shvemy Sewing Cooperative, whose artist-members work at sewing machines in the Garage all day to highlight the co-dependence of consumerism and hard labor conditions.
For the “Street Morphology” section, Garage commissioned works throughout Gorky Park, including a monumental mural on an administrative building by
Kirill Lebedev (Kto)
and a video-game projection by the ZLYE art group, which has been under government surveillance since 2010 for an intervention in Yekaterinburg for which they replaced green traffic lights with marijuana leaves. 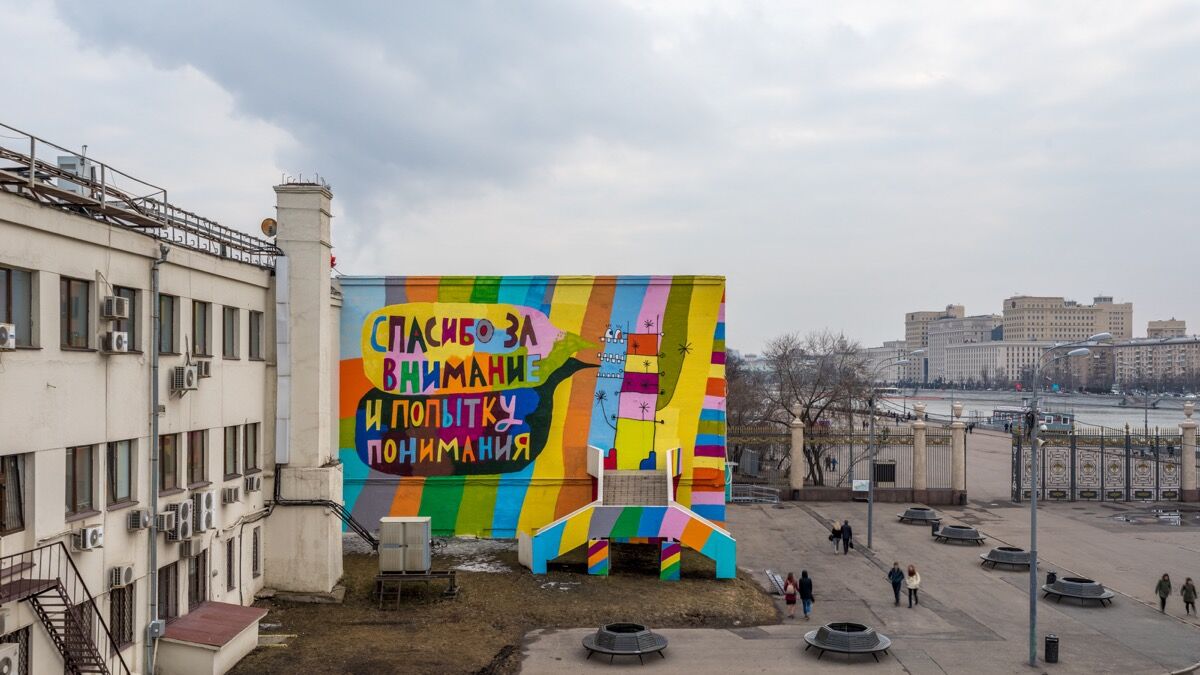 Street art, a popular and important form of expression among Russian contemporary artists, yet also an ephemeral one, is one medium in particular that will be given a longer life by the digital archive. The 68 artists of the inaugural Triennial, plus around 130 or more who didn’t make the final cut, compose the core of the archive, which lives on the Garage’s site and is continuously updated.
While this part of the archive will have the “Garage voice,” explains Fowle, it will also have a crowd-sourced platform where artists can upload their own information and photos via a template.
“The aim is to find a way that you or I or anyone around the world can go onto this website to learn about the different practices that artists have in different places around the country, and it comes from those artists rather than being mediated through some kind of institutional voice,” she says.
As if that project weren’t daunting enough, Garage is also working on a separate digital archive of its traveling exhibitions of Russian art collectives. It’s an extension of the museum’s physical archive, a collection of thousands of items—catalogs, letters, newspaper articles, and other documents—related to Russian art since the 1950s, culled together from acquisitions and gifts from artists, galleries, and collectors.
To manage such a massive undertaking, Garage is working with two other institutional archives in the process of being digitized—the Norton and Nancy Dodge Collection of Nonconformist Art from the Soviet Union at the Zimmerli Art Museum at Rutgers University, and Bremen University’s collection of underground materials from the Soviet Union and the Eastern Bloc—to create what’s being called the Russian Art Archive Network (RAAN).
“In the next few years you’ll be able to sit anywhere and access those three archives,” says Fowle. “We’re basically trying to make a history of Russian contemporary art, because there are so many art objects that might have disappeared or are less available.”
Meredith Mendelsohn
Related Stories