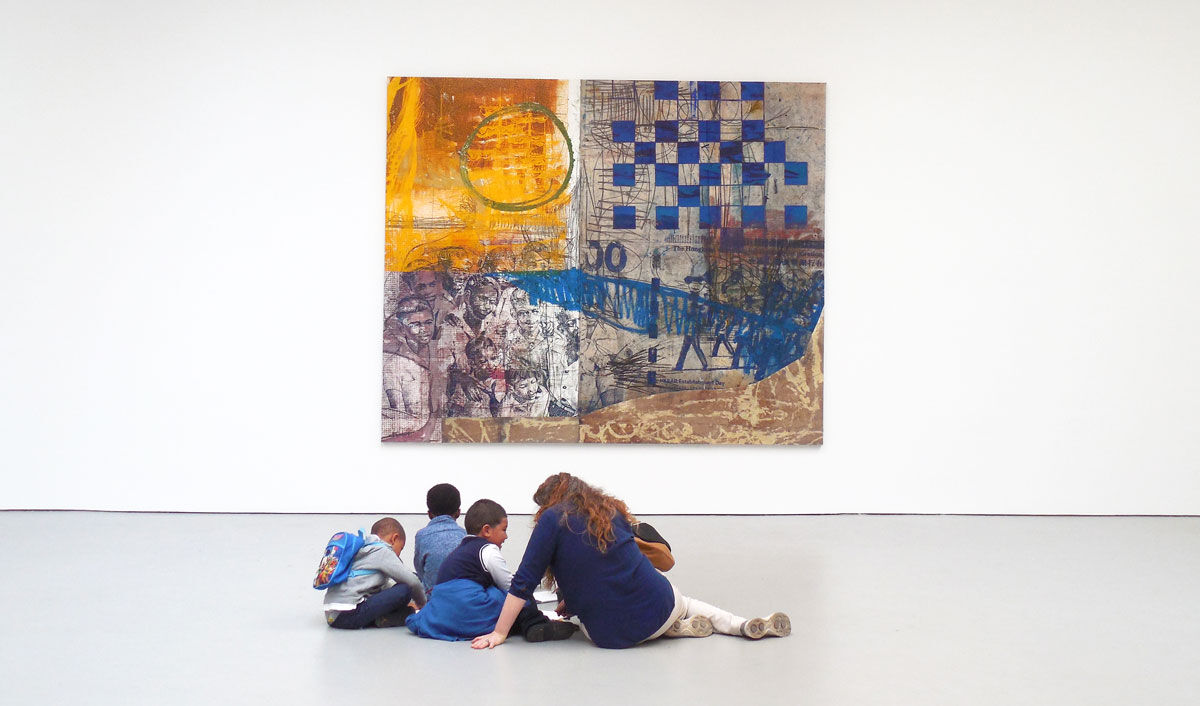 Last Wednesday morning, a very young art crowd sat patiently in the entryway to Hauser & Wirth on 18th Street. Twenty-one kindergarteners and their teachers from P.S. 197 in Harlem were waiting for the group that would guide them through a morning of gallery-hopping through Chelsea: Cyndie Berthezene, founder and director of Time In Arts Children’s Initiative, and her staff of six artists.
For the past 10 years, Berthezene has devoted herself to this initiative, which provides schoolchildren from underserved communities in Harlem and the Bronx with access to making and seeing art on a weekly basis. Soon enough, she appeared and sprang into action, warmly greeting wide-eyed kids as she swiftly passed out sketchbooks and colored pencils and then whisked half the class out onto the sidewalk. While their friends explored
Rashid Johnson
’s powerful installations throughout Hauser & Wirth, these kids were off to see
Oscar Murillo
at David Zwirner. And these are just two of the 15 to 20 gallery and museum shows that the children will see this school year as part of the program. As we reached Zwirner, Berthezene engaged the six-year-olds in a catchy singalong with hand movements. Its resounding message was key: “Don’t touch the art!”
Inside, as I blocked a small child from sideswiping a Murillo painting, Berthezene smiled and said, “Now you know what my life is like.” Her weeks are filled with such situations, as well as countless hours spent arranging visits to galleries or art classes held at Time In’s studio on 29th street. She employs a rotating group of some 20 practicing artists part-time, to work with the children in small groups (the student-to-teacher ratio is five to one) as they sketch at the city’s major galleries and do hands-on art projects at the studio. “These kids are the future audiences—they are the future collectors, the future museum-goers, they’re now immersed in the art world,” Berthezene tells me. She estimates that the children who have been involved over the years know more about contemporary art and see more shows than the average New Yorker. “It’s not prohibitive for them as it was for the generations that precede them,” she adds. 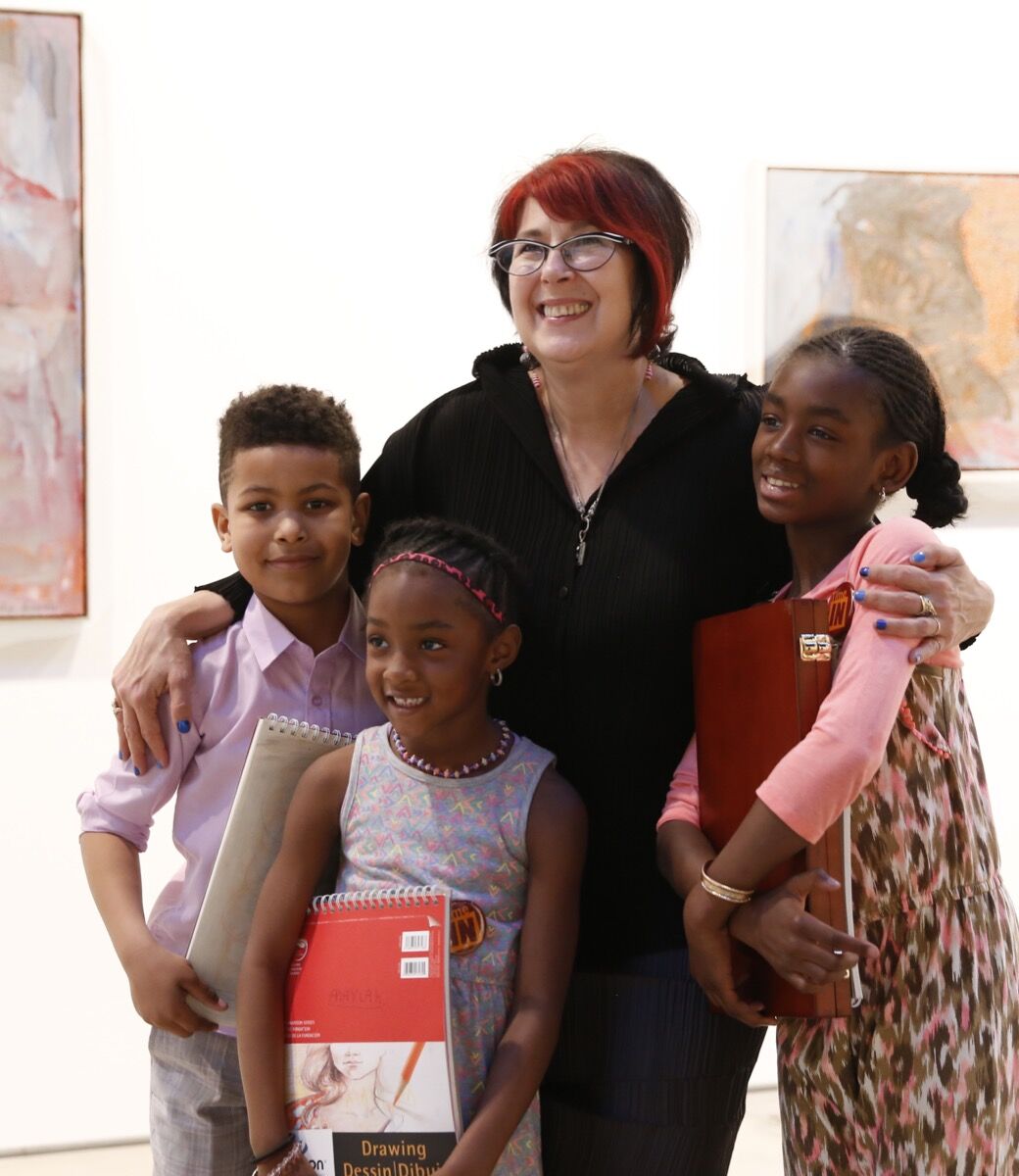 Time In traces back to 1997, when Berthezene established HiArt!, a private art program she began when her own daughter was a two-year-old. For a price, the robust program engaged children in art through artmaking activities and visits to galleries and museums; the children involved came from families that could afford to pay for it (including her own daughter, now in her early twenties, who has gone on to art school). Over time, Berthezene saw the program’s positive effects firsthand, in terms of the children’s artmaking skills, their enthusiasm for meeting and working with artists, and the consistent opportunities for creativity and inspiration it provided.
She started to think about kids who don’t have access to such a program, and decided to develop one for them—for students in “chronically impoverished neighborhoods,” where “art is not part of their school curriculum, and it’s not part of their home life,” she says. “Most people don’t think of doing stuff like this with little kids, most people don’t think ‘Oh, little kids want to go out and see Rashid Johnson or Oscar Murillo.’ They’re thinking ‘Let’s go to Disney.’ But the truth is kids are just as happy with opera as a Disney singalong, and just as happy with seeing the work of
Lynda Benglis
.”
Time In follows the same model as HiArt!, except that it’s integrated into the public school day. Berthezene proposed it to New York’s Department of Education, and after much back-and-forth, in 2006 they agreed to let her begin with two classes, 30 kindergarteners, and they covered the costs of buses. Later that year, she was able to add two pre-K classes from the same school. For Berthezene’s part, the initial funding for Time In came from a party thrown by friends in their apartment on Central Park West (the couple’s kids were enrolled in HiArt! for years), during which they raised $3,000. “Other than that, I had no money, I had started just with my credit card,” Berthezene explains. “The idea is that we’d take kids from pre-K and we’d keep them every year,” she says, and while achieving this has not been easy (they had to cancel the program in the very first school, for example, when the school was given failing status), she’s made great progress. “We have our Bronx fifth graders who come tomorrow, who have been in the program since kindergarten,” she tells me. 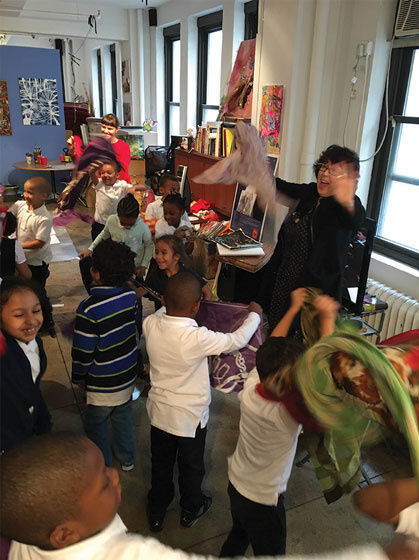 Cyndie Berthezene with Time In students at their 29th Street studio. Image courtesy of Time In Children’s Arts Initiative. 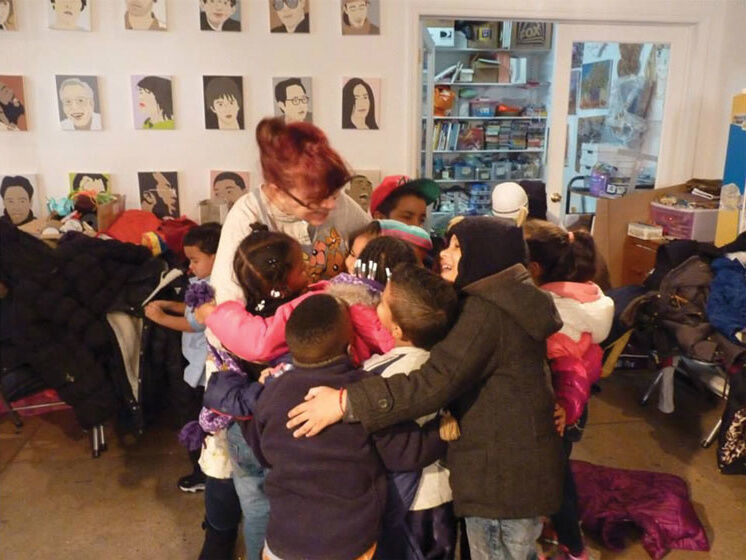 Cyndie Berthezene with Time In students at their 29th Street studio. Image courtesy of Time In Children’s Arts Initiative.

Advertisement
So how has Time In scaled from 30 kids per year to the 800 enrolled in the program last year? “Blood, sweat, and tears,” Berthezene replies. Over the years, she has cycled through various different funding methods, and broadened her network, which includes many members of the contemporary art community. For example, Time In held charity auctions at Haunch of Venison and Nancy Hoffman Gallery, and just this spring, a gala dinner and concert at Hauser & Wirth—where they raised $93,000. “We scale based on how much money we raise,” she said, noting that the organization is currently struggling because certain funds promised last year, including support from an auction house and a finance company that had given the year prior, didn’t come through.
“Those kinds of things make a really serious impact on a small organization,” she says. Berthezene had to scale back the number of kids participating this year to 590 (last year they worked with 800 kids, and had planned to work with 1,100 this year). “Financially we constantly struggle; it’s hard to raise money for that many kids,” she says. She notes that it’s not easy to convince some arts patrons, who would be more likely to give money to a cause that comes with more recognition, like a donor’s circle or a plaque on the wall. Despite these challenges, Berthezene proudly shares with me that at one of the three schools she’s working with this year, every child at that school will have access to art on a weekly basis.
In the beginning, she says of the first group enrolled in Time In, “the kids were very disruptive, but we were able to work with them in a deep way, and get them involved in their own learning.” She remembers another trip to David Zwirner in 2007, when she brought her first group of kindergarteners to an
Isa Genzken
show. Two small boys were acting up and fighting, so she grabbed each by the hand and kept them close as they visited the show. She describes seeing an immediate transformation among the two as they saw the show. “As we were walking out they were saying to each other, ‘Man I want to be an artist when I grow up! Yeah, I want to be an artist, too!’ and for me that was a great moment because I realized what an incredible effect this is having on them,” she says. “Even though her work is complicated, it opened up the idea to them for what they could do, and that was amazing.” Over the years, she’s seen Time In make an impact in children with developmental disorders and learning disabilities, providing them with outlets for creativity and expression that they wouldn’t have in their school classrooms.
Last week, groups met artist
Michal Rovner
, as she led them through her current solo show at Pace Gallery. “The kids were just amazed; they don’t necessarily have exposure to these really creative, unusual ideas, and when someone important tells them what they’re doing is good, it means so much to them and that can carry you forever, that can carry you right to being a grownup,” Berthezene offers. “A lot of what we’re doing is opening those doors. When someone like a Michal Rovner says to you, you can be anything you want, it’s a great new idea.”
Casey Lesser is Artsy’s Lead Editor, Contemporary Art and Creativity.
Related Stories

How to Teach Your Children to Care about Art 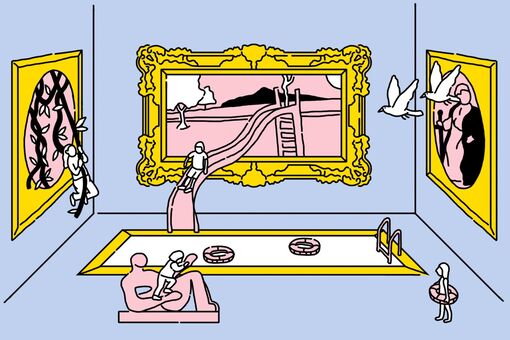