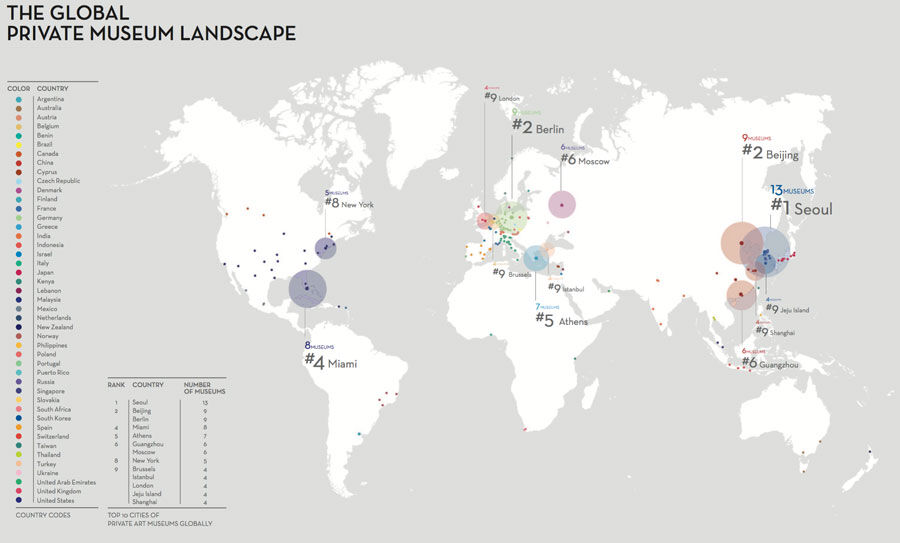 From the Broad in Los Angeles to the Fondazione Prada in Milan to the Zabludowicz Collection in London, art museums drawing on the collections of private individuals rather than public funds have established themselves as a major landmarks on the art world map. Released this month, the Private Art Museum Report (which, along with data from Larry’s List, surveyed 166 out of total of 317 privately owned contemporary art museums), provides a robust global look at the past, present, and future of these institutions. Along with gender imbalances and organizational challenges, the numbers reveal a stratospheric rise of private museums in Asia as collectors there snap up banner works by the world’s foremost artists and want to show them off to the wider public. Below, we combed the 100+-page report to highlight some key figures. 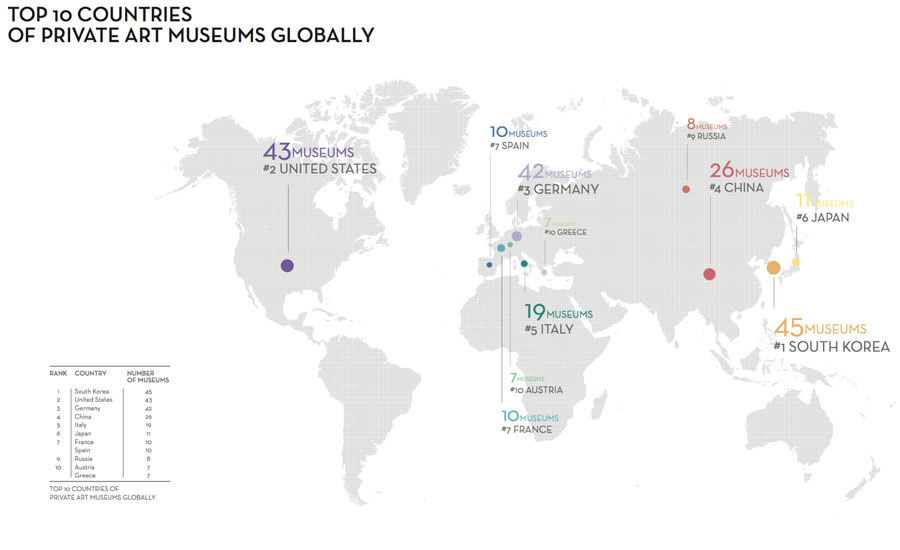 That Europe is home to the largest number of private art museums, boasting 45%, is perhaps no surprise given the continent’s storied history of individual artistic patronage. Asia places second at 33% (even though only 18% of global art collectors live there), while North America follows at 15%, with the lion’s share of those museums located in the United States (approximately 90%). The near nonexistence of private museums in Latin America (4%), Middle East and Africa (together, 2%), and Australia (1%) is worth noting, purely as a reminder of which regions are omitted when talking about a private museum boom. Such numbers shouldn’t be confused for a moribund artistic output in those regions. However, they do have relatively low numbers of major collectors. And, many of those collectors have lagged in putting their works on public view. (Whether that should be incentivized in some way is up for debate.)

Advertisement
The data gets a little more interesting when filtering location by country and city. South Korea boasts 45 private museums, the most of any country. The U.S. comes in at a close second with 43, followed by Germany, China, and Italy. South Korea’s capital, Seoul, also tops the per-city list, with 13 private museums, a fact that will no doubt be surprising to some, given that the city isn’t among those at the top of the art-world map. All in all, five of the top 10 cities are located in Asia, including the Korean island of Jeju, which has billionaire Kim Chang-il to thank for its four museums.
However, not a single Asian artist cracks the top 10 in terms of the percentage of private museum collections in which they are included. That honor is reserved for Western blue-chip figures like
Andy Warhol
,
Anselm Kiefer
,
Gerhard Richter
, and
Damien Hirst
. As Art Stage Singapore director Lorenzo Rudolf noted in a recent interview with Artsy, the sharp uptick of private collectors and private museums in Asia in recent years hasn’t yet translated into a major presence of Asian artists in those collections—or others worldwide. Asian collectors thus far tend to stick with major, internationally recognizable brands. 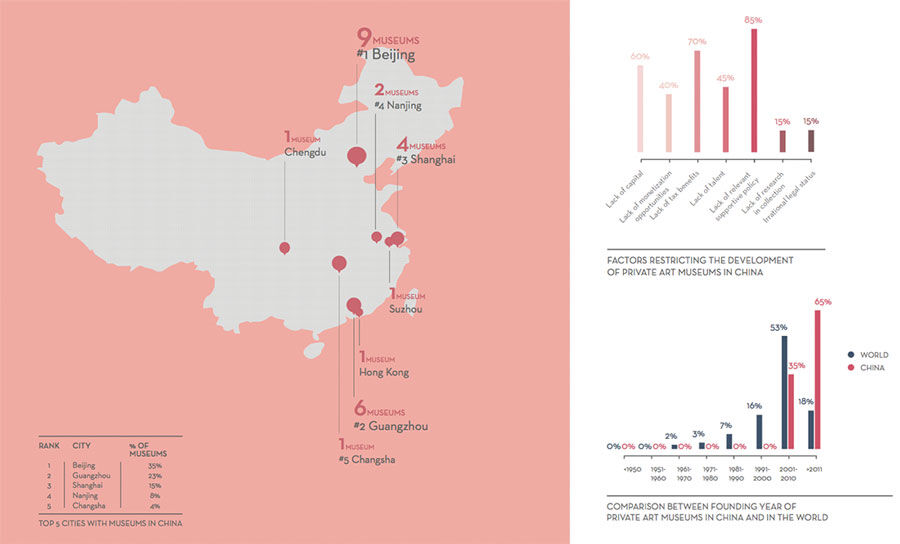 According to the report, the first decade of the millennium was a golden age for private museums. Over half (53%) of those in the world were founded between 2000 and 2010. Yet the growth in Asia generally and China specifically is particularly breathtaking. While only 18% of all private museums have been established worldwide since 2011, in China—led by the country’s powerhouse cities of Beijing, Guangzhou, and Shanghai—the figure is a staggering 65%, up from the previous decade’s 35%. One wonders if this kind of growth is sustainable, considering recent indications of a slowdown in Chinese economy, linked to manufacturing and real estate declines. Given that these museums rely predominantly on the wealth of their founders, watching to see if there’s a decrease in the number of new private art museums being built in the coming years could provide an interesting indication of how insulated Chinese elites are from the nation’s broader economic fortunes. Still, Max Bossier of Larry’s List remains bullish about the region’s prospects, stating in an email to Artsy that the findings of the report indicate that, in the coming years, “we will definitely see many new private museums in Asia.”
The report chalks such a rosy outlook up to a number of factors: the economy, policy (private museums are included in urban construction plans), and a still-burgeoning art market. “One reason for this development is the limited institutional infrastructure in these countries,” adds Bossier, noting that private museums in China fill a hole that public institutions might in other countries. Yet, while suffering from higher operating costs than the rest of the world, Chinese private museums don’t enjoy the same tax benefits that similar institutions might in Europe and elsewhere—no doubt a factor in the 85% of the country’s private museums citing “relevant policy” as a key factor hindering further development. Some of the skills required to run a museum are also absent, as Wang Wei and Liu Yiqian, founders of Shanghai’s Long Museum (with locations in both Pudong and West Bund), noted: “The practical problem is that our team has no background in museum operation, and they are not experienced enough. I don’t think this is a problem for us alone.”

Turning away from Asia, the report also reveals some broader issues, showing that, worldwide, the founders of these institutions tend to be overwhelmingly men, with only 18% of private art museums founded by women. That number isn’t a massive deviation from the gender imbalance present in collectors at a whole (of which women are only 29%). However, it’s another important reminder of gender imbalances that plague both the art world and the world at large.
Also addressed is the commonly leveled critique that private museums, unbound by the expectations that come with accepting public funds, are relatively difficult to access. While there are some egregious cases of inaccessibility, the report notes that over 85% of private museums hold “regular opening hours,” with a discernible trend away from opening for appointment only. Though “regular opening hours” certainly provides latitude (being regularly open one day a week still isn’t all that accessible), over 70% of those museums were open for more than 200 days per year. That number, while laudable, is maybe more exciting than it sounds once both figures are put together: 70% of 85% means that just barely 60% of the total number of private museums are functioning similarly to public institutions. Nonetheless, attendance numbers indicating that 35% of private museums receive 20,000+ visitors (the runaway attendance leader being the Saatchi Gallery and its 1.5 million annual visitors) are relatively strong given the small staff and limited size of many of these institutions.
Taken altogether, the report paints a bright picture as private museums further cement themselves as must-visit spaces—especially if they can expand into regions like Latin America and the Middle East. Not addressed in the report is the ever-important factor of what it’s like to visit and experience one of these spaces. The flexibility of a single owner can allow for intimate and interestingly curated presentations, and many private museums can be a welcome balance to the throngs of tourists flooding the likes of the MoMA and Tate.
Isaac Kaplan is an Associate Editor at Artsy.
See the full report here.
Images courtesy of the Private Art Museum Report and Larry’s List.
Related Stories