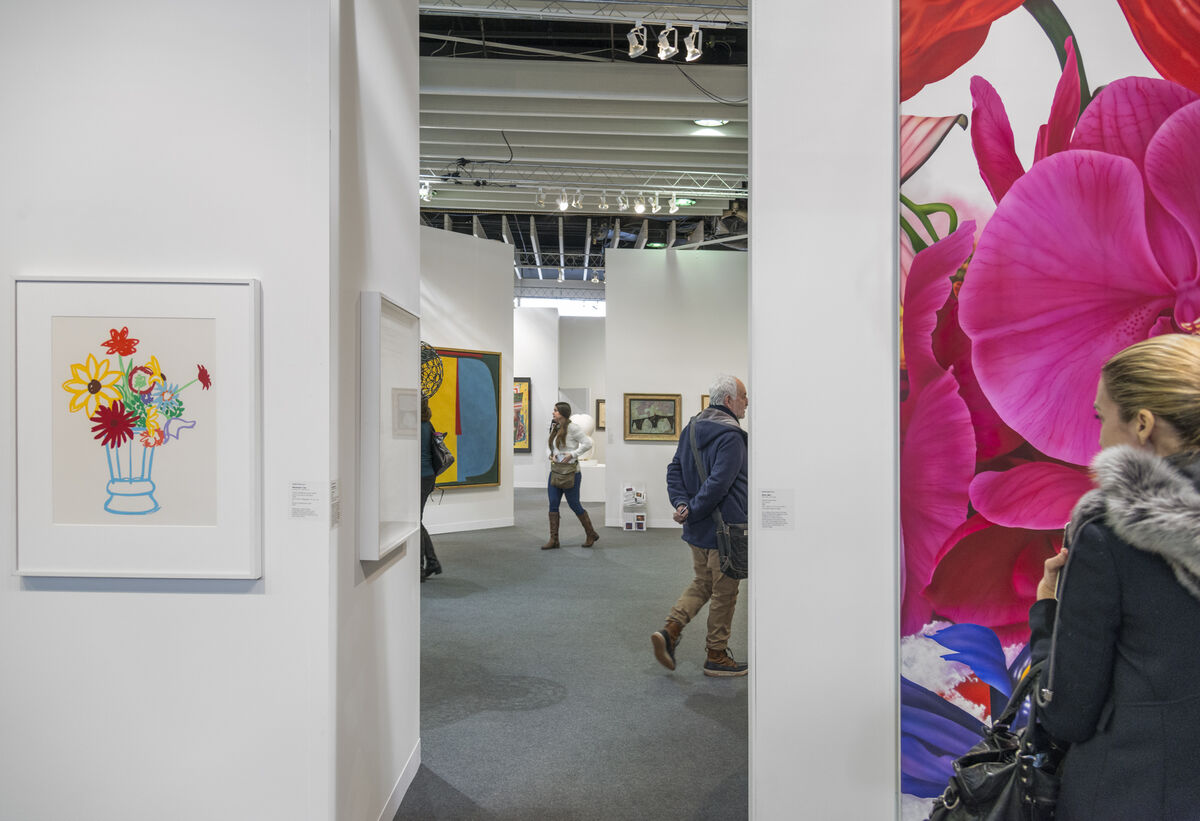 The Armory Show’s quieter section, focusing largely on 20th-century modernism, stretches out along New York’s Pier 92 once again this week, having opened to VIPs on Wednesday, a preview during which Sofia Coppola could be seen browsing the offerings unhampered by too much unwanted attention. Mayoral gallery’s approximation of Joan Miró’s studio, with masterworks mounted on easels, greets visitors at the entrance to the pier, and
Abstract Expressionist
icons are widespread throughout, with
Frank Stella
’s cartoonish, technicolor forms appearing in particular frequency following the artist’s recent retrospective at the Whitney Museum.
Chamberlain
,
Twombly
,
LeWitt
, and
Warhol
are also in heavy rotation. And standout presentations came from Armory Modern newcomer Montrasio Arte / Km0, with its tightly curated showcase of
Salvatore Scarpitta
and
Joseph Beuys
, and Michael Rosenfeld Gallery, with a gorgeous selection of works by pioneering female artists of the 20th century, including
Barbara Chase-Riboud
,
Jay DeFeo
,
Ruth Asawa
, and
Betye Saar
. 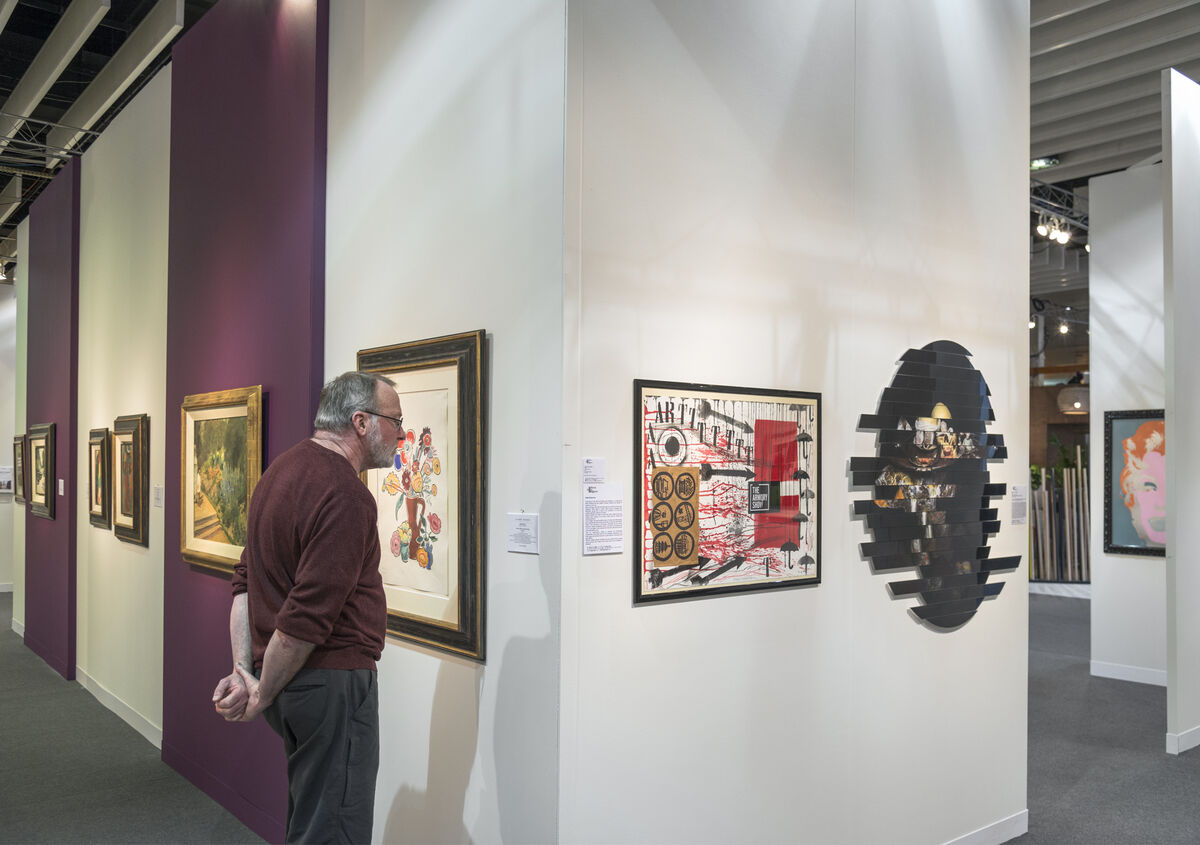 Pier 92’s very best discoveries, though, came in the form of works on paper made by individuals practicing outside of the art establishment. Drawings and prints abounded, ranging from figurative and abstract to conceptual and minimalist. At Philadelphia gallery Fleisher/Ollman’s booth, luminous abstract pastels by
Julian Martin
can be seen alongside drawings from so-called “outsider” artists
Bill Traylor
,
James Castle
,
Christina Ramberg
, and
Jim Nutt
.
Castle’s intimate, touching booklets, housing sketches of interiors and landscapes around his home in early 20th-century Idaho (priced between $8,000 and $26,000), are especially absorbing. Castle was born deaf and had little recourse to communicate throughout his life, but he devised a powerful form of expression via found materials—from paper and advertisements to soot and saliva. 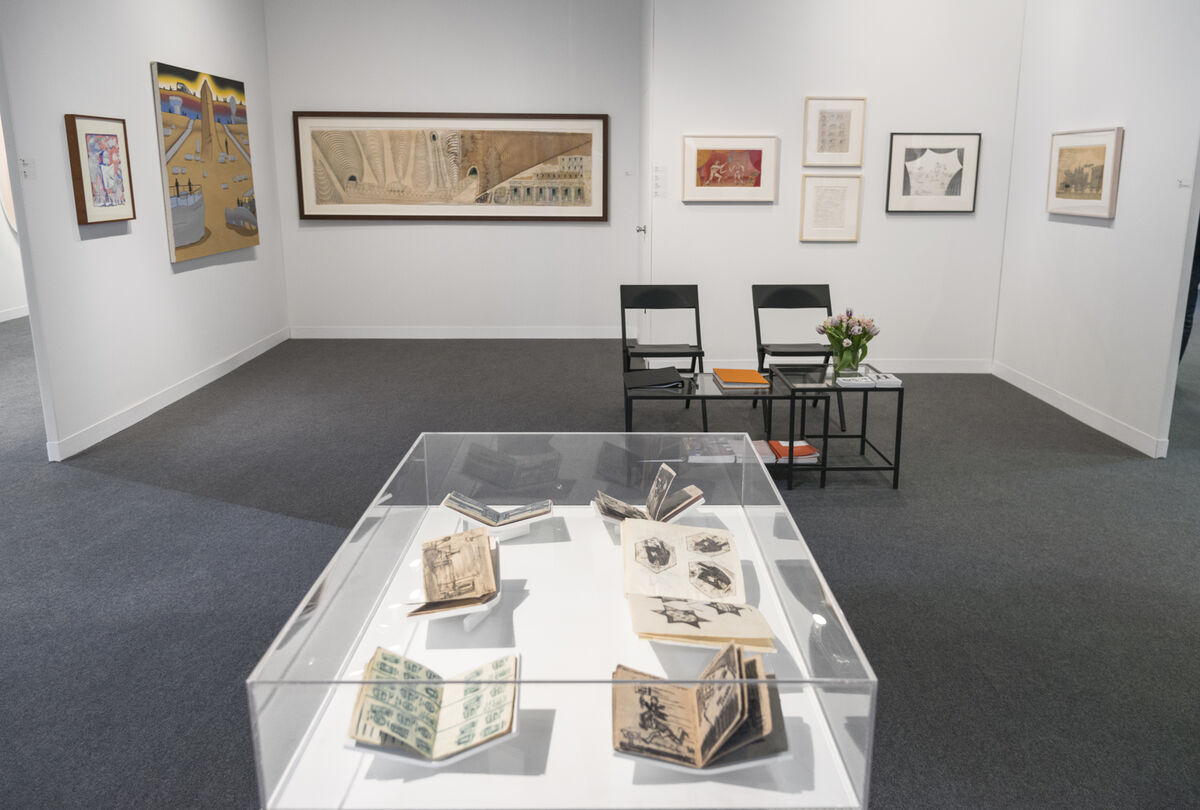 Installation view of Fleisher/Ollman’s booth at The Armory Show, 2016. Photo by Adam Reich for Artsy.

Advertisement
“This was probably drawn through a kaleidoscope,” says Claire Iltis, associate director at the gallery, pointing to a small, frayed page on which a prismatic image splinters into triangles, “and the symbols, which appear in many of the books, are invented symbols. He would also copy letters, and create his own letterforms based on English or Greek letterforms.”
Drawings by self-taught artists surface elsewhere along the pier, including at the booth of Chicago’s Carl Hammer Gallery, where a panoramic composition by the idiosyncratic 20th-century illustrator
Henry Darger
, whose work was discovered posthumously, is on sale for $500,000. Ontario’s Donald Ellis Gallery, exhibiting for the first time at The Armory Show, meanwhile, has given over its entire booth to Plains Indian “ledger drawings” (ranging in price from $9,500 to $65,000)—records of events, including battles and ceremonies, composed by Cheyenne, Lakota, and Kiowa Native Americans (among other tribes). These were originally created on rock walls and animal hides, and later on lined accounting ledgers sourced from reservations. 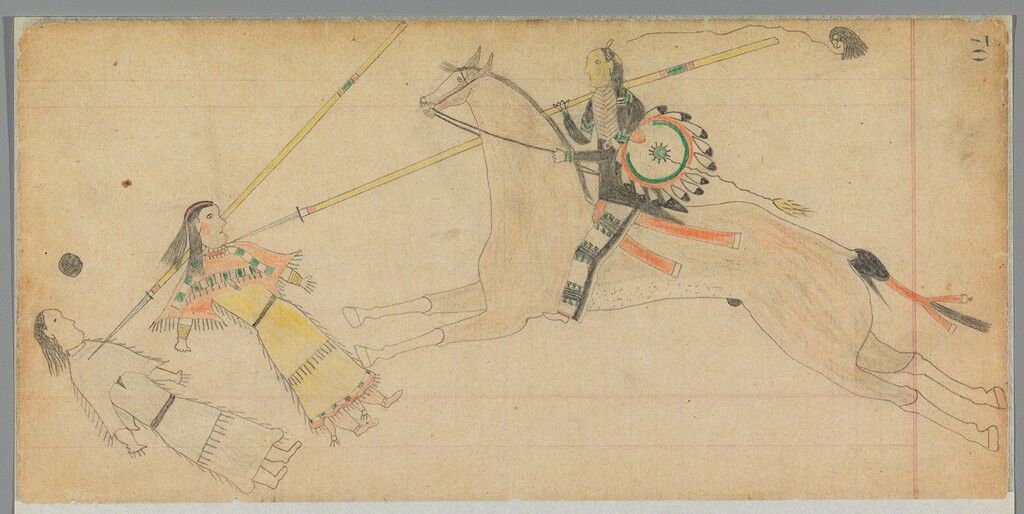 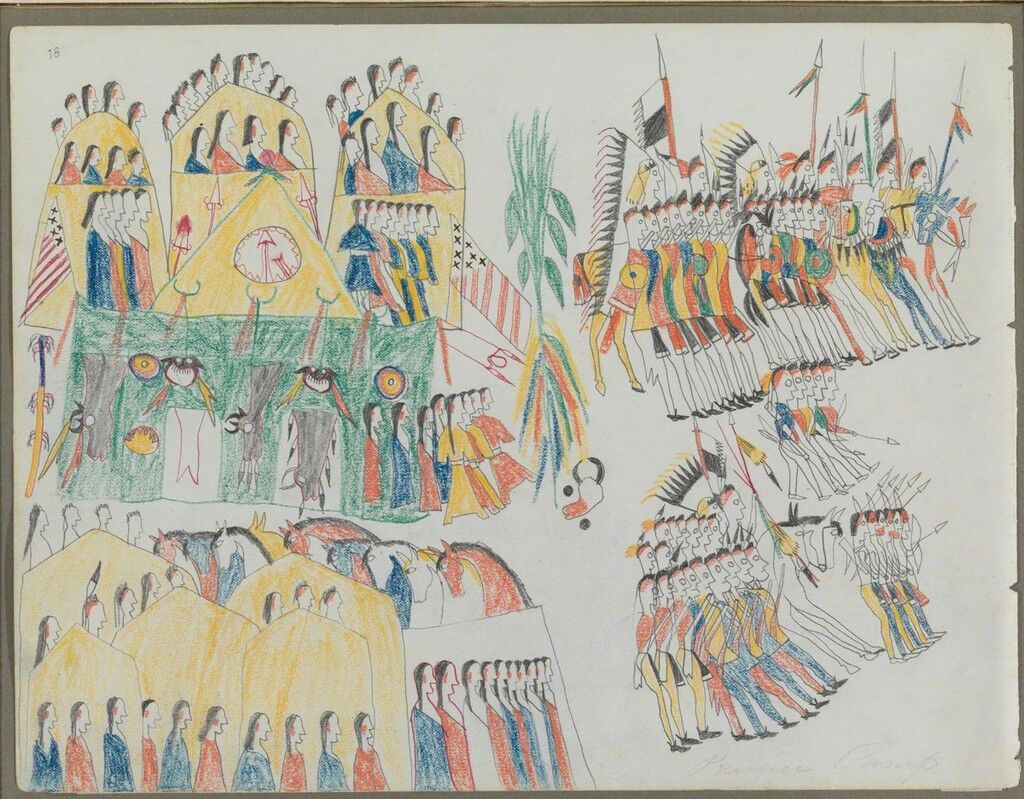 Attributed to Howling Wolf
Ledger Drawing, "Fort Sill Pawnee Village", ca. 1875
Donald Ellis Gallery
“What you’re looking at here are recordings of history and personal acts of valor and bravery,” says Ellis, pointing to a image on a yellowed piece of paper of a train in motion, rendered in colored pencil. “These were executed at Saint Augustine, Florida, in 1875. There was a famous trial where 72 warriors were convicted of murder, and taken by train to Fort Marion, where they were imprisoned until 1878. At the fort, a man named Captain Pratt gave them pieces of paper to continue this tradition.” This is the first time these drawings have been shown in New York since a seminal 1996 exhibition at the Drawing Center, and Ellis describes their market as “in its infancy,” though seven of them in the $30,000–65,000 range were snapped up on the fair’s opening day.
Another newcomer to the Modern wing, Leslie Tonkonow Artworks + Projects has works-on-paper not from “outsider” artists but from two lesser-known, mid-century female conceptual and earthwork artists: Agnes Denes (one of which features the pyramidal form that she’s experimented with throughout much of her career) and
Michelle Stuart
. 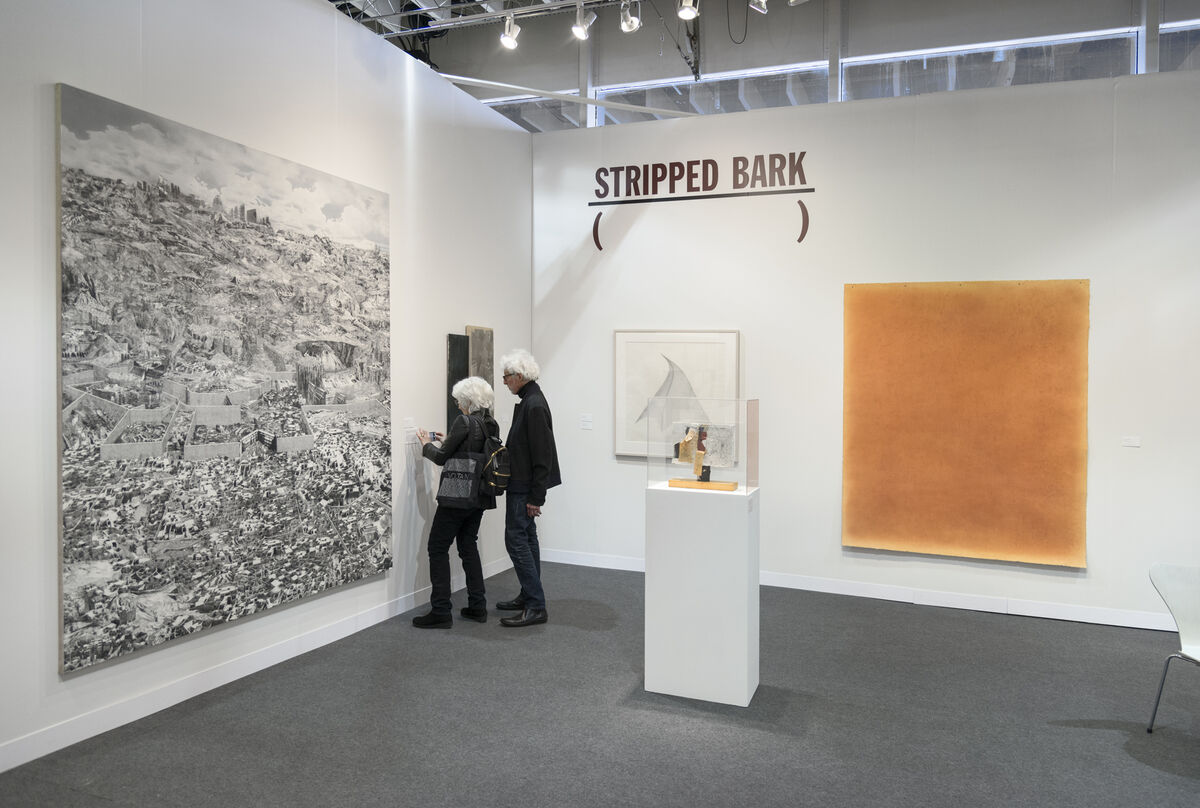 Installation view of Leslie Tonkonow’s booth at The Armory Show, 2016. Photo by Adam Reich for Artsy.

“The market for minimalist and conceptual works-on-paper, which has traditionally been supported by institutions and a relatively small, highly knowledgeable group of private collectors, continues to strengthen and expand,” says Tonkonow. “An increasing number of contemporary collectors and museums are now actively seeking historically significant works by lesser known but important figures from this period—particularly women, members of minority groups, and other artists outside of the Western canon.”
Indeed Pier 92 also includes stellar presentations of works-on-paper by non-Western artists. Cecilia de Torres, Ltd., the roster of which takes its cue from the work and school of the iconic Uruguayan modernist
Joaquín Torres-García
(whose retrospective at MoMA recently closed), shows a handful of more recent abstract drawings from
Catalina Chervin
,
Julián Terán
, and
Gustavo Díaz
—who gallery director Dan Pollock describes as “compulsive, and a little bit mad, in the best possible way.”

One can see what he means: Díaz’s extraordinarily fine compositions, one of which is for sale at the booth, resembling cellular structures or intricate visualizations of data, are based on systems, geometry, and chaos theory. Chervin’s similarly dense and meditative large-scale drawing, composed of modulated clouds of charcoal, brings to mind an abstract Chinese scroll painting. Bergamin & Gomide also brings a strong selection of  Latin American artists to Armory Modern, with stunning prints and ink works by iconic modernists
Lygia Pape
and
Mira Schendel
. And so, amid the more conventional array of mid-century American modernists, lesser-knowns, outsiders, and non-Western artists are finding a place, and a market, at the stuffier end of The Armory Show.
Tess Thackara
Explore The Armory Show 2016 on Artsy.
Related Stories