Why Is the Oval Office an Oval? 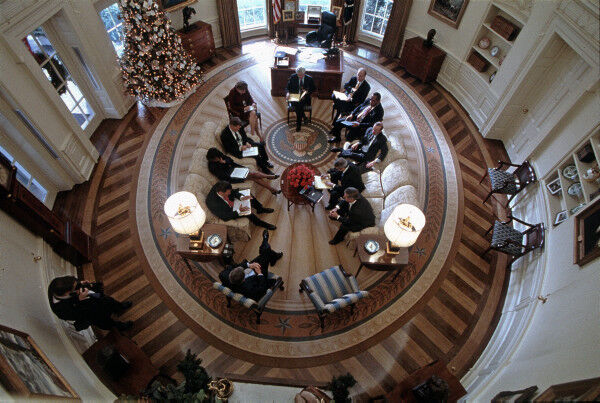 The Oval Office has served as the backdrop for some of the most iconic moments in 20th-century U.S. presidential history. It was there that Richard Nixon shook hands with Elvis and took a phone call from the moon; it was there that both Dwight Eisenhower and John F. Kennedy elaborated on their decisions to send federal troops to desegregate American schools.
In fact, the office has become so ingrained in the American consciousness that many assume it has been around as long as the country itself. That’s one of the most common misperceptions about the now-iconic space, says White House Historical Association research historian Evan Phifer.
“I’ve seen things printed that say, ‘Lincoln worked in the Oval Office’—and at that time the president’s office was actually on the second floor of the White House residence,” he notes. “Really, the Oval Office as a concept only dates back to 1909.” 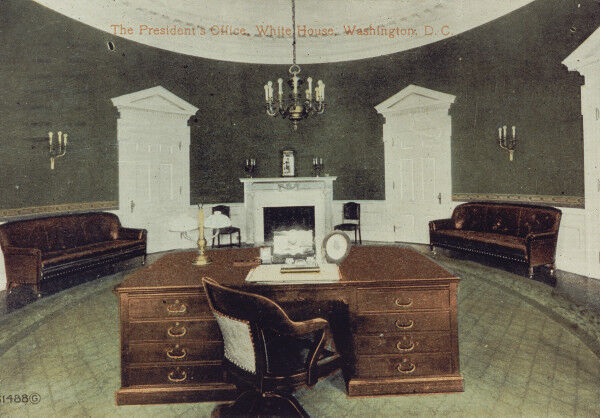 A tinted postcard of the first Oval Office, made during the William Howard Taft administration. Courtesy of the White House Collection/White House Historical Association.

The distinctive oval design, however, can be traced back to the very first president of the United States of America: George Washington himself. Since his term predated the White House, Washington resided in a series of presidential mansions—one of which, located in the then-capital city of Philadelphia, was renovated to accommodate a particular political ceremony known as a “levee.” During these formal receptions, visitors would arrange themselves in a circle around Washington, who would then address each of them in turn. To facilitate these levees, the straight rear walls in two main rooms of the presidential home were rebuilt in a semi-circular shape.
The levee ceremonies, English in origin, earned Washington harsh criticism from many citizens of the young nation. The National Gazette decried the practice as “the legitimate offspring of inequality, begotten by aristocracy and monarchy by corruption.” Another writer claimed that, with his levee room, Washington “has exactly copied the style of monarchs…[and] has in short only differed from kings in wanting a kingdom, which his friends were seeking to provide for him.”
The levees would soon be discontinued by the Democratic-Republican Thomas Jefferson, who took office in 1801. But the curved walls of Washington’s presidential home had already inspired architect James Hoban, whose winning design for the White House featured an “elliptic saloon” at the center. This oval interior soon became known as the “Blue Room” and originally served as a reception hall for visitors. 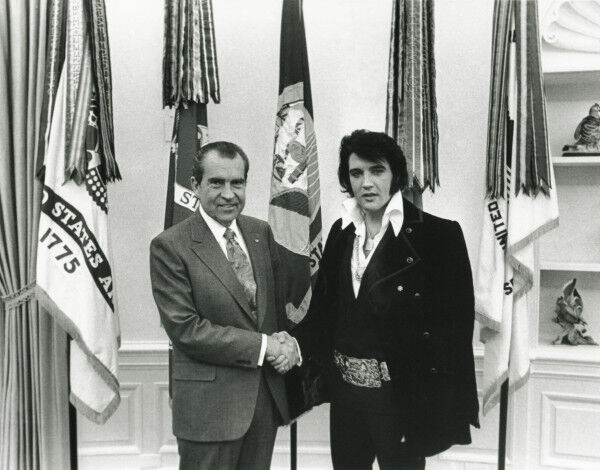 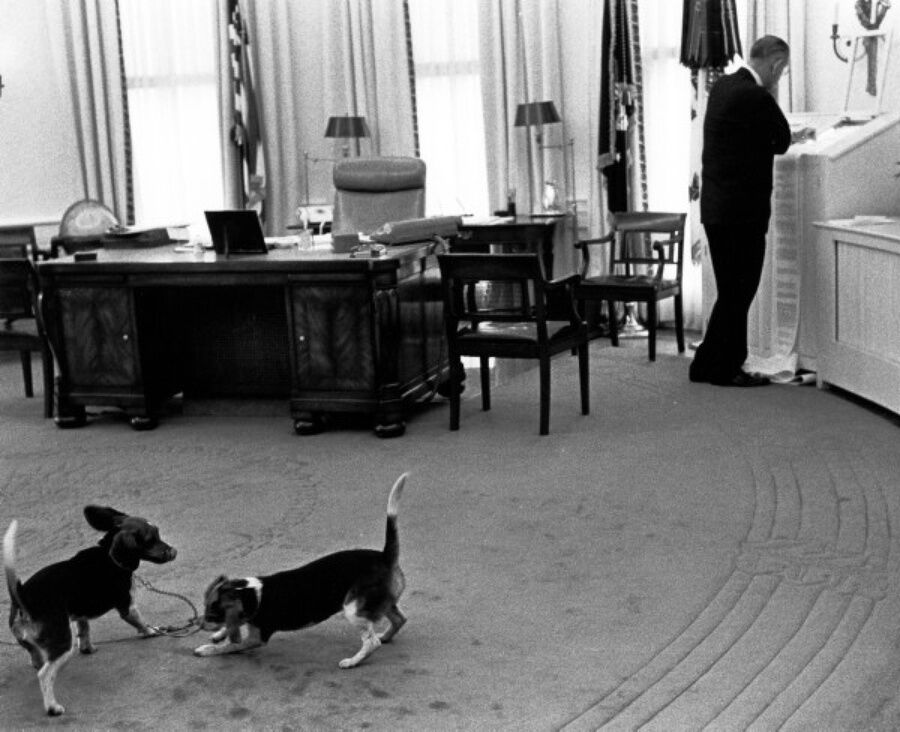 President Lyndon B. Johnson and his beagles, Him and Her, in the Oval Office. Photo by Yoichi Okamoto. Courtesy of the Lyndon B. Johnson Presidential Library and Museum/NARA and the White House Historical Association.

Advertisement
But it would be another century before this shape was appropriated for the president’s workspace. Until the turn of the 20th century, there was no dedicated wing for the presidential offices. Instead, chief executives worked out of the second floor of the White House, alongside their living quarters. It was Theodore Roosevelt who decided to construct the separate, temporary Executive Office Building, which included a rectangular executive office.
William Howard Taft would make this addition, known as the “West Wing,” permanent. Architect Nathan C. Wyeth translated the elliptical shape of the Blue Room into the presidential office—a decision, Phifer says, that was intended to smooth the transition between White House and West Wing.
“A lot of visitors, members of Congress, or visiting dignitaries had gotten used to calling on the president, visiting him at the White House,” Phifer explains. “So there was sort of a lackluster response when they had to meet the president in their office in the West Wing. With this oval office, it ties the Blue Room to the president’s office and creates a historic and symbolic link between the two.” 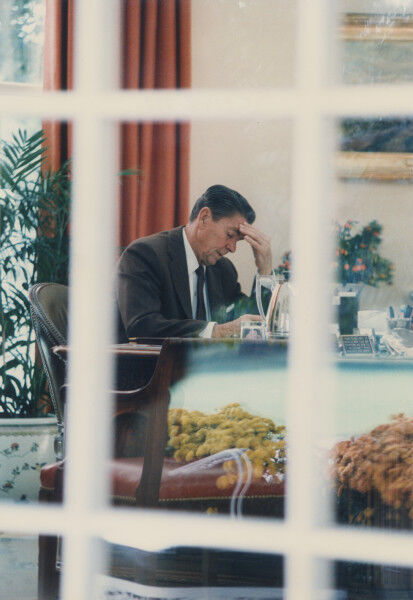 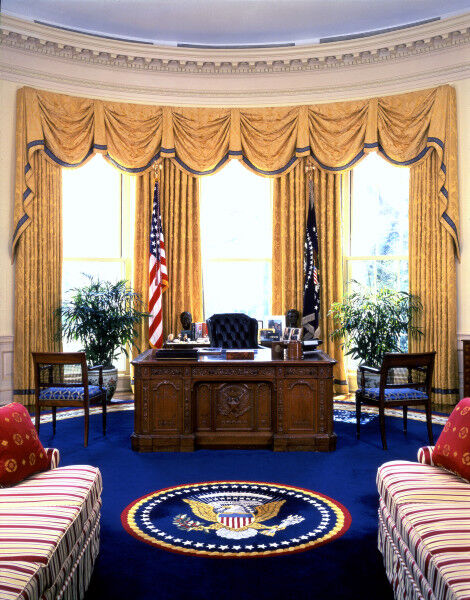 The Oval Office during the administration of Bill Clinton. Courtesy of the White House Historical Association.

In 1933, Franklin Roosevelt decided to expand the West Wing and shifted the location of the Oval Office to the southeast corner of the building—a decision that likely allowed easier access to the residential portions of the White House. TIME magazine called the new office, which had been slightly enlarged, the “handsomest room in the building.”
Still, though it had taken on its distinctive shape, it didn’t yet have a name. “Calling it the Oval Office was really more of a mid- to late 20th-century phenomenon, as media news and TV increased,” Phifer says. “More and more Americans were becoming familiar with the White House interiors through visual media.” Searching for the phrase “Oval Office” in the Washington Post’s archives, he notes, reveals “an enormous jump in the instance of the term being used starting in the late 1960s.”
It was then, that “the public latched onto this idea of the White House as a presidential working space.” Phifer says. “A lot of Americans have their own offices, at work and at home, so it creates that link between the presidency and something many Americans can relate to.” With one small difference—most of our offices have corners.
Abigail Cain
Cover image: The Oval Office during the administration of President Barack Obama. Photo by Bruce White. © 2010 White House Historical Association. Courtesy of the White House Historical Association.
Related Stories