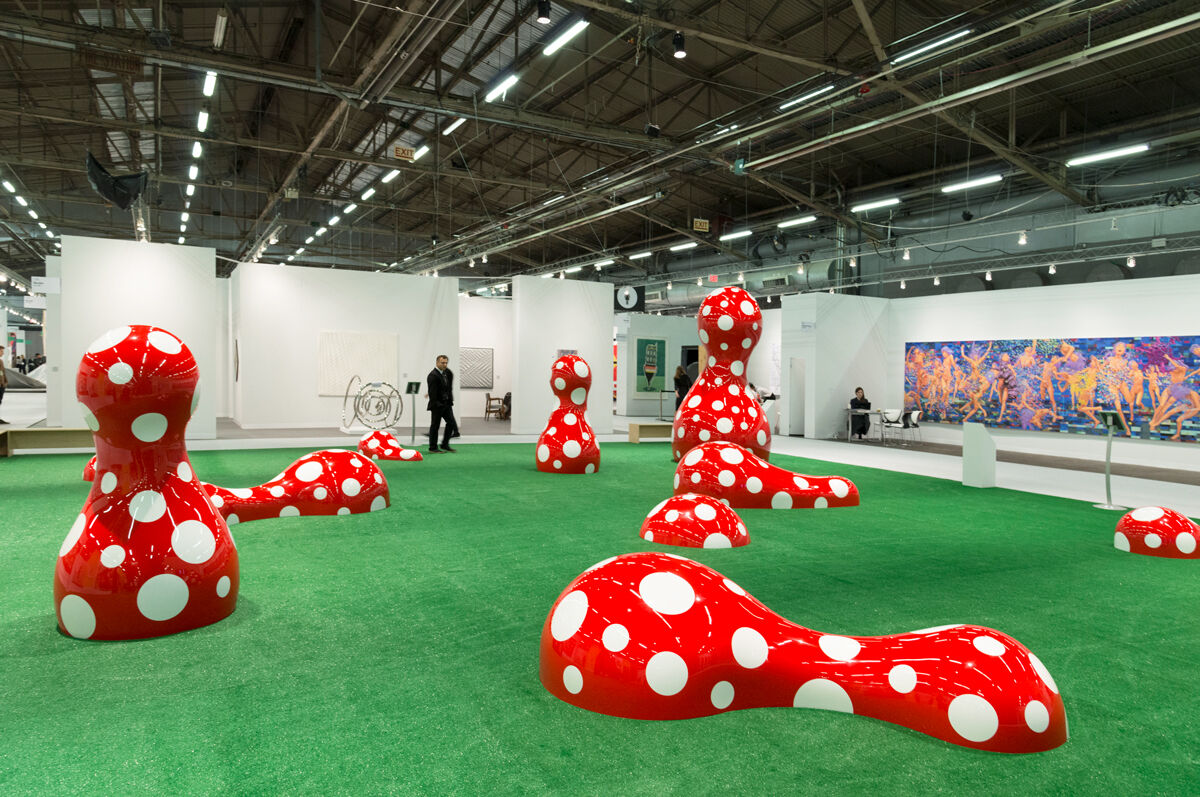 Installation view of Yayoi Kusama, Guidepost to the New World, 2016, at The Armory Show, 2017. Photo by Adam Reich for Artsy.

The Armory Show opened to VIPs on Wednesday morning, welcoming 210 galleries from 30 countries to Manhattan’s west side piers. The fair’s 23rd edition sees significant changes to its floorplan, thanks to the new leadership of director Benjamin Genocchio.
“What a difference a year makes,” said Genocchio as the fair kicked into gear.
Thanks to widened aisles and more spacious booths, The Armory Show now has one of the most seamless traffic patterns of any art fair its size—gone are the dead ends and straggling aisles. It also newly embraces the industrial character of the piers, something earlier editions have tried to gussy up. The concrete floors have been painted black, replacing the dull carpeting that had previously covered the majority of the fair. It’s a subtle shift but one that goes far in making the structure’s corrugated roof and metal rafters a branding asset rather than an eyesore. The intent is clear: The Armory Show is forging a new identity.
One of the main additions to the floor plan is what Genocchio calls the fair’s “sacred heart,” a square in the middle of Pier 94 inspired by town centers in North Africa. At this center sits a freshly-commissioned installation by
Yayoi Kusama
, Guidepost to the New World (2016), which sees a 40-by-49-foot astroturf garden spotted with polka-dotted phallic sculptures.
The work, presented by Victoria Miro, is among 13 large-scale installations scattered across Piers 92 and 94, part of the inaugural Platform sector curated by Eric Shiner. Merely an hour into The Armory Show’s preview, one edition of the installation had already found a home with an international collector—for a price in the region of $1 million. A second of the work’s five editions was reportedly on hold.
Victoria Miro director and partner Glenn Scott Wright described a “tremendous” reception to Kusama’s work in The Armory Show’s early hours. The gallery has carried Guidepost to the New World’s garden theme over to its booth—astroturf floors and all. Scott Wright reported having sold an additional painting by Kusama for $500,000 as well as an abstract landscape by
Secundino Hernández
(Untitled, 2017) and a painting by
Jules de Balincourt
(TBC, 2017), by the afternoon of opening day.
London’s White Cube, exhibiting at the fair for the first time since 2011, sold a number of pieces from a solo booth of
Cerith Wyn Evans
’s work on opening day. The presentation precedes a slew of major museum exhibitions for the Welsh conceptual artist, most imminently a solo commission opening at Tate Britain on March 28th and Wyn Evans’s participation in this year’s Venice Biennale.
White Cube director Peter Brandt said that the gallery returned to the Armory show because it is “starting to have more of a presence here in New York,” with a viewing space and office in the city forthcoming. Brandt said the gallery is particularly interested to see whether The Armory Show delivers a different sort of collector than the fair’s main competitor in the city, Frieze New York, where it has regularly exhibited.
According to the director, Genocchio “was very much a part of that decision” to return. As for the results, he said, typical of the more organic pace of a New York fair, it will take a few days to ascertain. But he said, “hopefully it will be positive.”
Armory Show stalwart Jack Shainman was effusive about his early results this year. “There’s an amazing energy, as always, but the redesign makes the fair much more comfortable to walk around,” he said. Shainman’s booth moved this year from a now-eliminated cul-de-sac on the righthand wing of Pier 94 to a central booth near the fair’s Town Square.
“Sales have been excellent,” said the gallerist. By late afternoon on Wednesday, he had placed a painting by
Nina Chanel Abney
(Si, Mister, 2017) with a collector for $75,000; two works by
Nick Cave
(both titled Hustle Coat, 2017) for $85,000 apiece; and a work by
Toyin Ojih Odutola
(Nakameguro, 2017) for $35,000.
“Because of the whole state of politics in the world and all this unknowing, nobody really knows [what to expect],” he said. “But it’s been a phenomenal fair, maybe one of our best.” 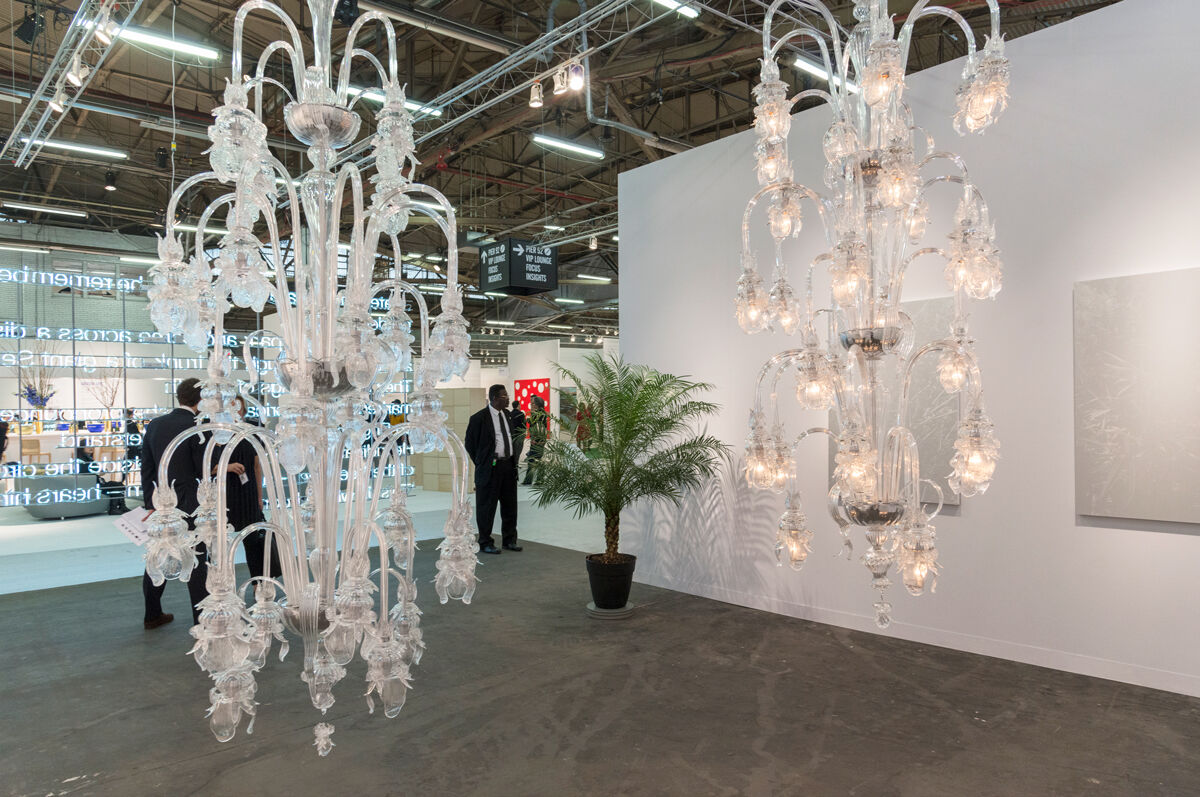 Installation view of White Cube’s booth at The Armory Show, 2017. Photo by Adam Reich for Artsy.

In one of The Armory Show’s few overtly political moments, a powerful and timely painting by Titus Kaphar hangs on the booth’s outer wall; the work (The Cost of Removal, 2017) was inspired by President Trump’s hanging of a portrait of Andrew Jackson in the Oval Office and sees Jackson on a horse with the names of his slaves penned on shreds of canvas tacked on by rusted nails. The piece, priced at $75,000, was on reserve with a museum by late afternoon.
“I made him finish this for the fair,” said Shainman, visibly moved by the work. “I said, ‘I’ll owe you.’”
As part of Genocchio’s restructuring of The Armory Show’s floorplan, 17 dealers from the Galleries sector moved upstairs to Pier 92. Among them is Berlin’s DITTRICH & SCHLECHTRIEM, a gallery which graduated from Presents (the fair’s section for solo and dual presentations by young dealers).
Gallery partner André Schlechtriem said he thought their placement—next to both the stairwell that connects the two piers as well as to the entrance to Pier 92 from the exterior—was an upgrade from being at Pier 94’s rear. (It also allowed them close proximity to
Dorian Gaudin
’s self-roving sculpture that is part of the Platform sector and rolls at the pier’s entrance.)
However, other galleries on Pier 92, that was in the past reserved for the now-eliminated Modern section of The Armory show, were less enthusiastic about moving piers. Moran Bondaroff’s director of sales Jessica Witkin said that “some of the mid-tier contemporary galleries are not together,” adding that this shift makes the fair “a little bit hard to navigate,” this year; it could result in missed opportunities for more serendipitous sales.
Witkin said the gallery had sold well on opening day to known collectors and those whom they had guided upstairs to their booth. Among those sales were several ceramic works by Detroit-based artist
Anders Ruhwald
on the range of $4,000–$6,000. However, the director noted that she wished the reorganization had been more strategic. 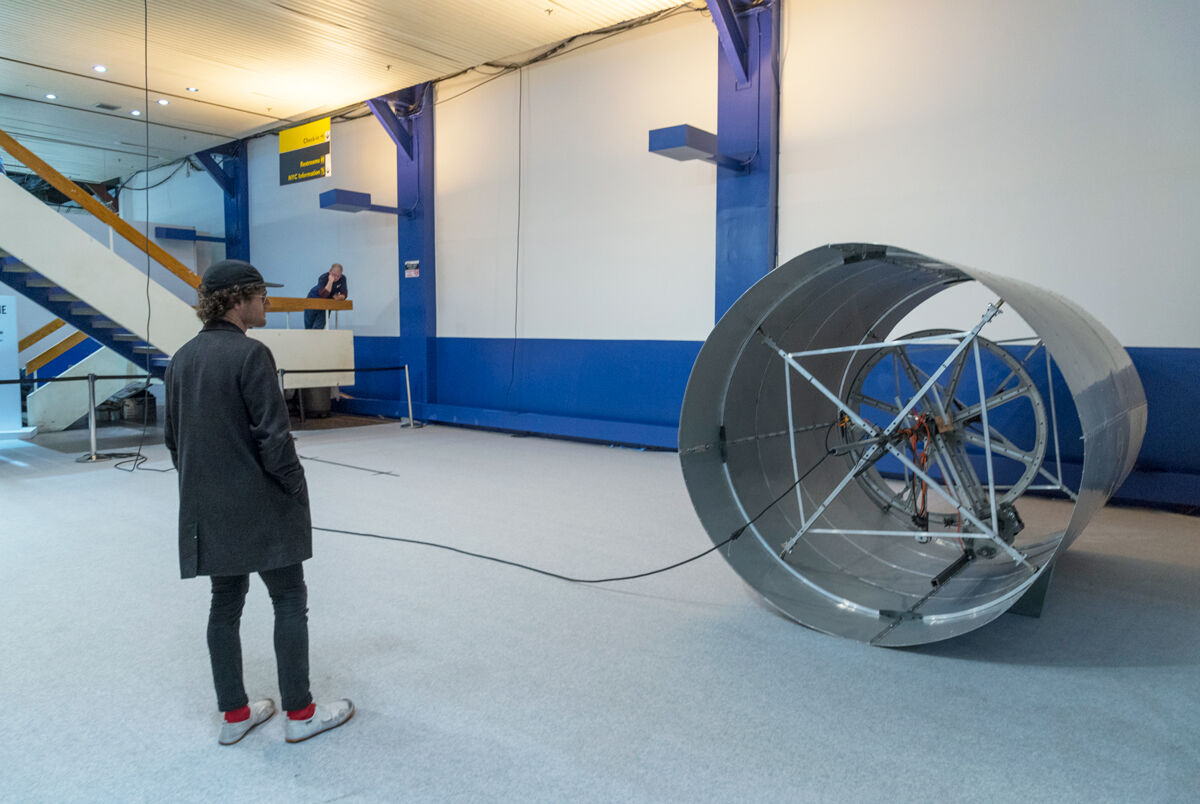 Installation view of Dorian Gaudin, Missing You, 2016. Photo by Adam Reich for Artsy.

Advertisement
The relocated and revamped Focus section, this year organized by former LACMA associate curator of contemporary art Jarrett Gregory around a thematic show rather than a regional focus, was nonetheless drawing collectors to the southern pier. KOW gallerist Raphael Oberhuber, who shows work by a collective of Congolese plantation workers known as
CATPC
, said he approved of the shift in strategy for the section.
“I believe more in sections that are based on ideas than media or geography,” he said.
Many had praised the 2016 Focus section, which presented work by artists from Africa and the African diaspora. And a number of the galleries who participated in last year’s Focus have returned to the fair. Among them is London gallery Tiwani Contemporary, which specializes in contemporary African art and this year shows in Presents on Pier 94; Cape Town’s blank projects has also made the jump.
“The move from regional focus to something more integrated feels like a step up because we’re part of a global conversation,” said the gallery’s Eva Langret. “Some of the artists that we work with might have more in common with somebody from New York, Berlin, or Brussels, than an artist who’s from the same continent.”
Tiwani is showing ink on paper works by Zimbabwe-based artist
Gareth Nyandoro
on the range of $5,000–$25,000, a move which director Maria Varnava, said marks “a more serious direction” for the gallery from the Focus sector, which she believes is too much of a novelty for collectors. 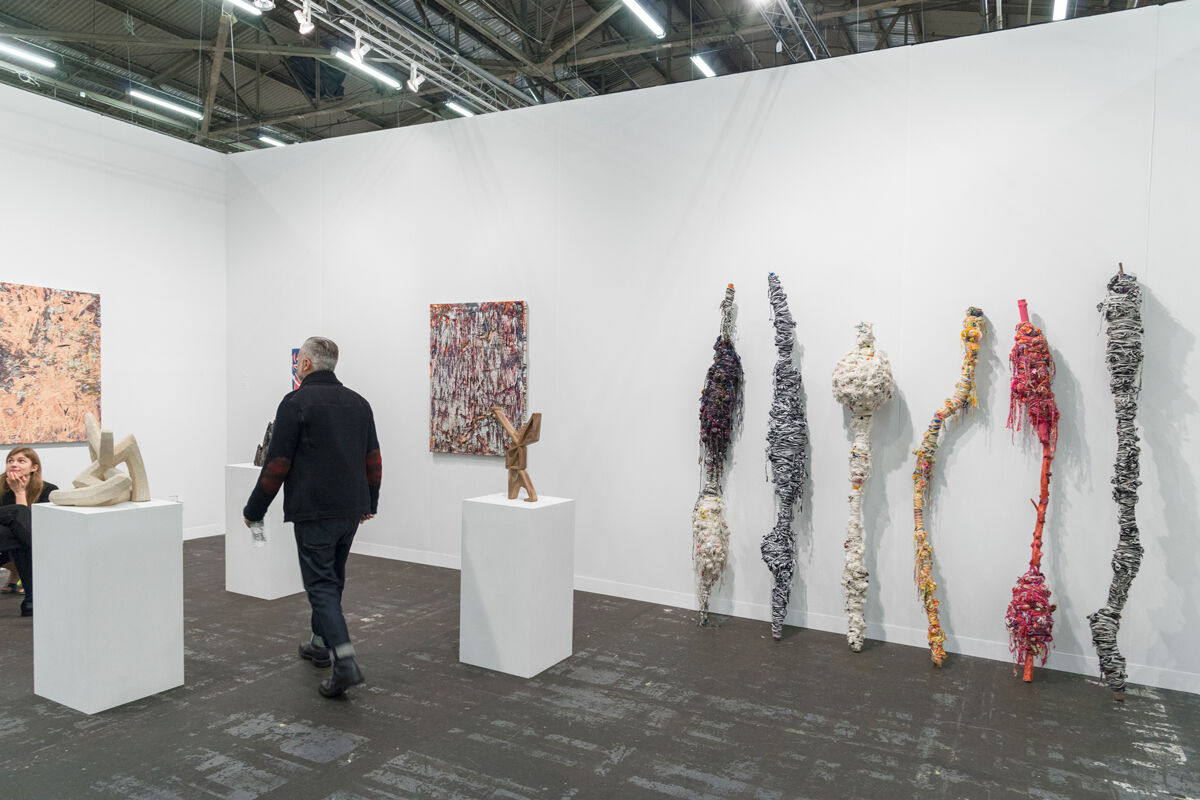 Installation view of Galerie Sultana’s booth at The Armory Show, 2017. Photo by Adam Reich for Artsy.

Another newcomer to Presents, Paris gallerist and Paris Internationale art fair co-founder Guillaume Sultana, said he chose Armory this year for “practical reasons.” Frieze New York closes just three days before previews of the 57th Venice Biennale begin. The timing will force Sultana to sit out of the May fair in order to join his artist, Paul Maheke, in Venice, where Maheke is participating in the new Diaspora Pavilion. Thus far, Sultana said he has been pleasantly surprised by the more open layout and higher caliber of galleries than he recalled on his last visit to the fair. However, he had yet to confirm a sale.
With NADA and Independent opening on Thursday, many collectors were said to be making the full rounds before coming back to Armory on Friday or the weekend to confirm purchases—particularly for young artists’ work. And while overall, the selling tempo at fairs has slowed, with many more becoming slow burners rather than charging out of the gate, the energy at The Armory Show’s opening day shows a strong resurgence for the New York institution.
Molly Gottschalk is Artsy’s Lead Visuals Editor.
Related Stories 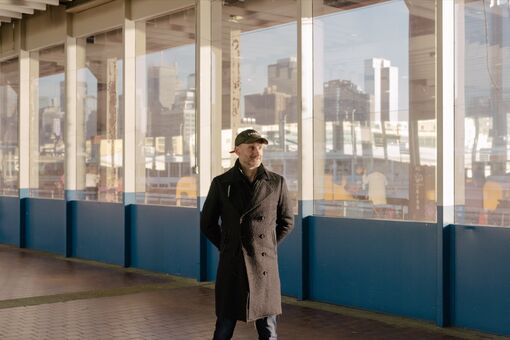