The Overlooked Role of Black Women in European Renaissance Paintings 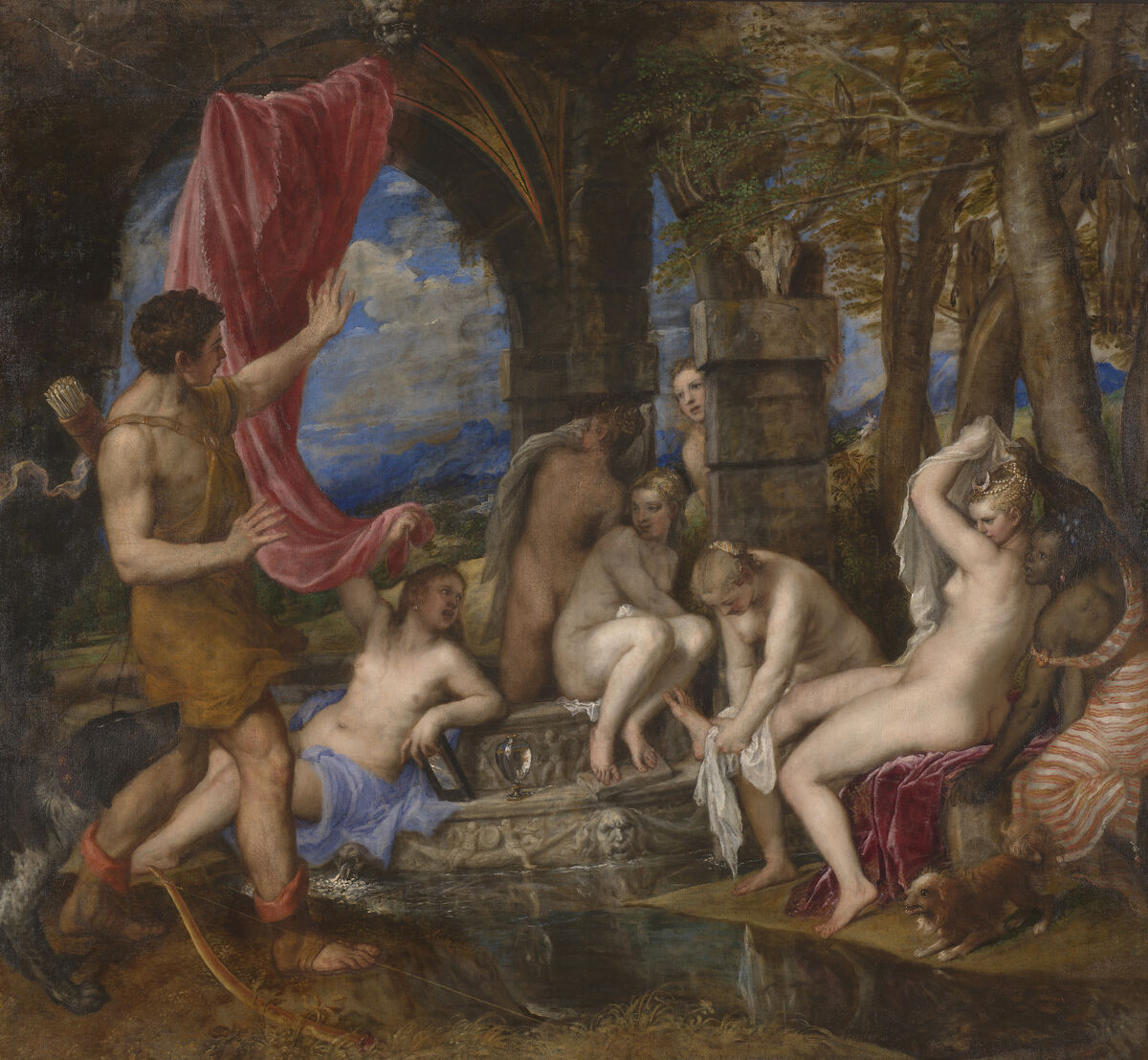 Titian, Diana and Actaeon, 1556-59. Courtesy of the National Galleries of Scotland.

In
Titian
’s mid-16th-century painting Diana and Actaeon (1556–59), a fantastical Greco-Roman myth is recounted in a vivid flourish of oil paint and dramatic figuration. The piece shows Diana, chaste goddess of the hunt, bathing as Actaeon mistakenly stumbles upon her. Startled and scandalized, Diana instantly transforms Actaeon into a stag to be killed and eaten by his own hounds. Considered a seminal European
Renaissance
masterpiece, much has been written on the painting, yet one central figure stands untouched by art-historical analysis: the black woman bending over to help Diana recover her clothing.
During the European Renaissance, identity and emphasis on individuality were highly valued concepts within visual culture. Portraiture gained popularity, as did the idea of the artist as celebrity. Even with this focus on the self as imminent, attention paid to other cultures was slow and often fetishitic. In particular, the late 15th century saw a shift in European focus to the commodities and “exoticism” of the eastern and western coasts of Africa. Depictions of Black women during this period exemplify this interest in the foreign, “unknowable” people of the continent.
The Black woman in Titian’s Diana and Actaeon is tucked into the far right corner of the frame. An attendant to Diana, she awkwardly bends her body to help cover Diana’s body from Actaeon’s view. Her hair is adorned with blue embellishments and her ears are bejeweled with a red-and-gold pendant. Her skin is a shade of dark brown, similar to that of the trees surrounding the scene. Her face is round, with a button nose unreasonably upturned as she lunges toward Diana in a panic. 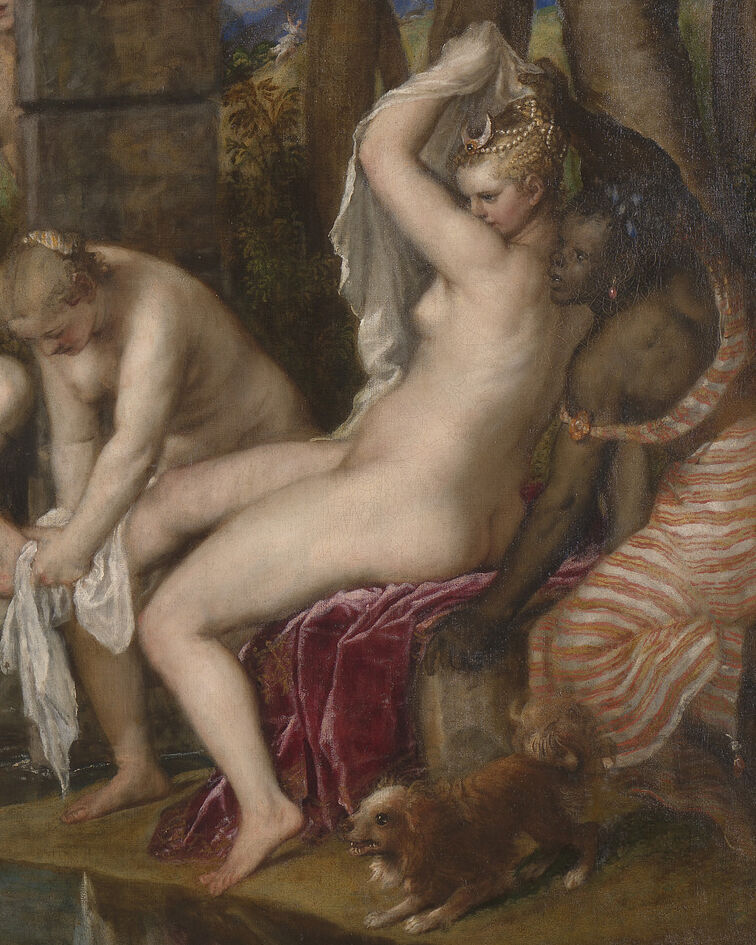 Titian, detail of Diana and Actaeon, 1556-59. Courtesy of the National Galleries of Scotland.

While every central female figure in the painting is illuminated by an unseen light, the Black woman’s skin appears faded, untouched by the glow. Skin color often played a significant role in Europeans’ fantasy of Black people. Much less focused on nuance related to race or racial discourse, Europeans were obsessed with “color” as the defining trait of African otherness. There were several popular theories on what caused the darkness of African skin color, ranging from climate (Pliny the Elder), to divine punishment (the book of Genesis), to proximity to the sun (Ptolemy). Set against a norm of whiteness, dark or Black skin functioned as a visible marker of social difference and served, within Titian’s painting and beyond, to diminish the Black woman into an identity of other.
It was common for court members or the wealthy to dress their attendants and servants, both male and female, in bright shades such as white and pink in order to emphasize the darkness of their skin when showing them off to visitors. As early as the 1590s, the same use of color juxtaposition can be observed in
Cornelis Cornelisz van Haarlem
’s Bathsheba at her Toilet (1594). Though the earliest documentation of Africans arriving in the Netherlands was 1596, Cornelis Cornelisz van Haarlem depicts the attendant as an unnatural charcoal shade, a foil to the creamy whiteness of Bathsheba’s skin and the shimmering gold-blond hair. 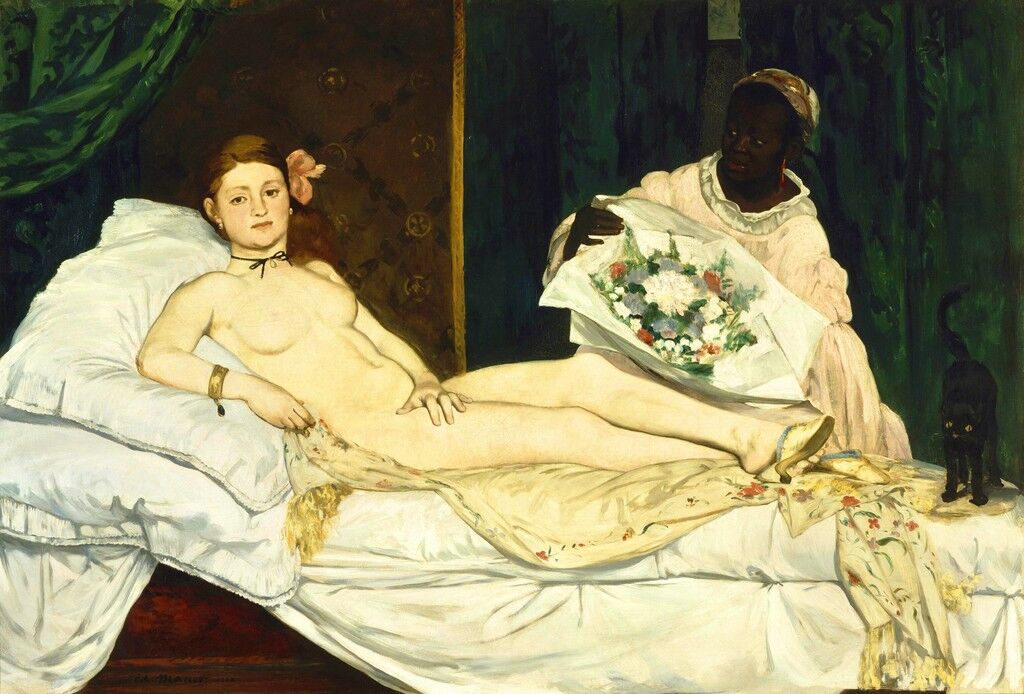 Édouard Manet
Olympia, 1863
Musée d'Orsay, Paris
Advertisement
The positioning of Black women in these paintings recalls feminist scholar bell hooks’s late 1990s analysis on Black female models in contemporary fashion magazines. Hooks wrote that “often Black women’s bodies are positioned in a freakish, distorted manner. Black women are…shown in contorted positions so that the adjacent White female body always appears to be a signifier of ‘natural’ beauty.” In Titian’s painting, the attendant’s body is twisted into Diana at an unnatural angle in order to shield her. She is cropped from the image and compressed to fulfill her role in the action. She is socially peripheral and symbolically central. The contrasting visual of the two women, side by side, assumes Black ugliness and white beauty.
Further symbolism is conveyed through clothing. While Diana and her nymphs are unclothed—and Diana’s nudity is so chaste that Actaeon must be punished to death for beholding it without permission—the attendant is fully clothed. She is draped in light-pink-and-white cloth, which covers the majority of her body. Much less about modesty, her covered form can be seen as the establishment of her body as devoid of sexuality, or at least the type of pure sensuality allotted to Diana and her nymphs. She is not depicted as being seen fully, because it did not seem essential to the narrative that her sexuality exists.
Looking to the Western art-historical canon, placing a denuded white female alongside a fully clothed Black female servant can be observed in
Édouard Manet
’s Olympia (1863) and
Jean-Léon Gérôme
’s The Great Bath at Bursa (1885). The little attention these figures have received—their nude, white counterparts taking up most of the literary space—is what Denise Murrell, in her book and exhibition catalog Posing Modernity, refers to as a “deeper blindness…in art history,” a failure to recognize how changing modes of representing the Black female figure were foundational to the development of modern art. The 2018–19 exhibition “Posing Modernity” examined the history of the Black figure in western modern art. 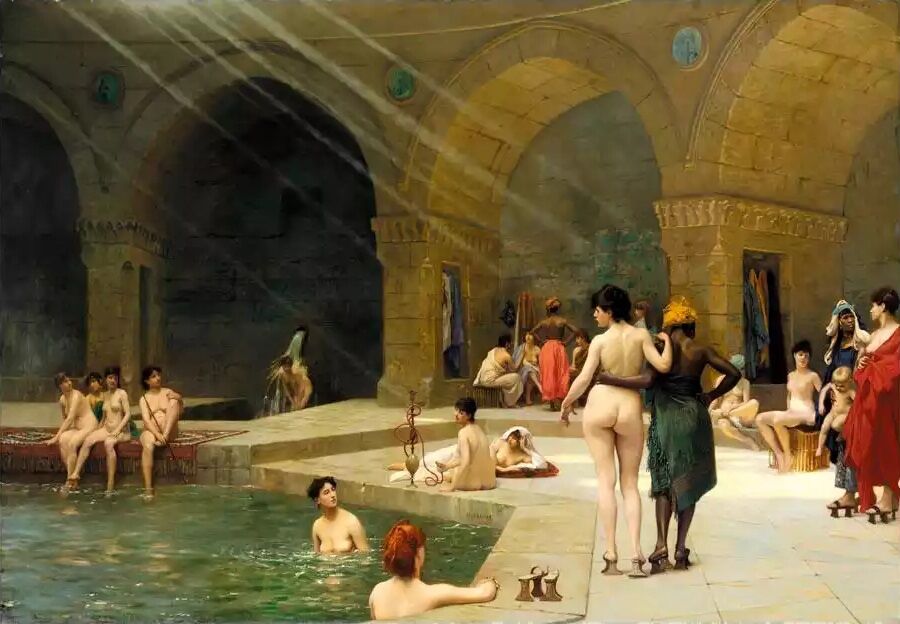 Jean-Léon Gérôme, The Great Bath at Bursa, 1885. Via Wikimedia Commons.

In Murrell’s explanation of “Posing Modernity,” she argues, in reference to T.J. Clark’s seminal text “Olympia’s Choice,” that the depiction of the servant in Olympia represents fictional understandings of Blackness, from a European perspective, of “natural” servitude. She deconstructs this narrative, presenting the Black woman as a foil to the accompanying white woman’s exalted position across portrayals of Black and white women together.
These works serve to perpetuate the inaptness of the Black female body for nudity, vouch for its ugliness, and dismiss it in aesthetic conversations, then and now. Much more than a visual rendering of a mythological tale, Titian’s Diana and Actaeon served to perpetuate a European Renaissance fantasy of what was visually interesting and societally accepted as beautiful at the time. Titian’s work acts to confine Black womanhood to a space of functional and visual servitude to white beauty. Diana’s attendant serves as the quintessential symbol for a Renaissance understanding of the role of Black women in European society. More than a sign of the times, she reflects the beginning of a long and continuing history of Black femininity contrasted with and relegated by white femininity in visual culture.
Jaelynn Walls is a curator and writer based in Texas. They are the 2019-21 Andrew W. Mellon Curatorial Fellow at the Museum of Fine Arts Houston and host of Art in Color, an educational Youtube series
Related Stories