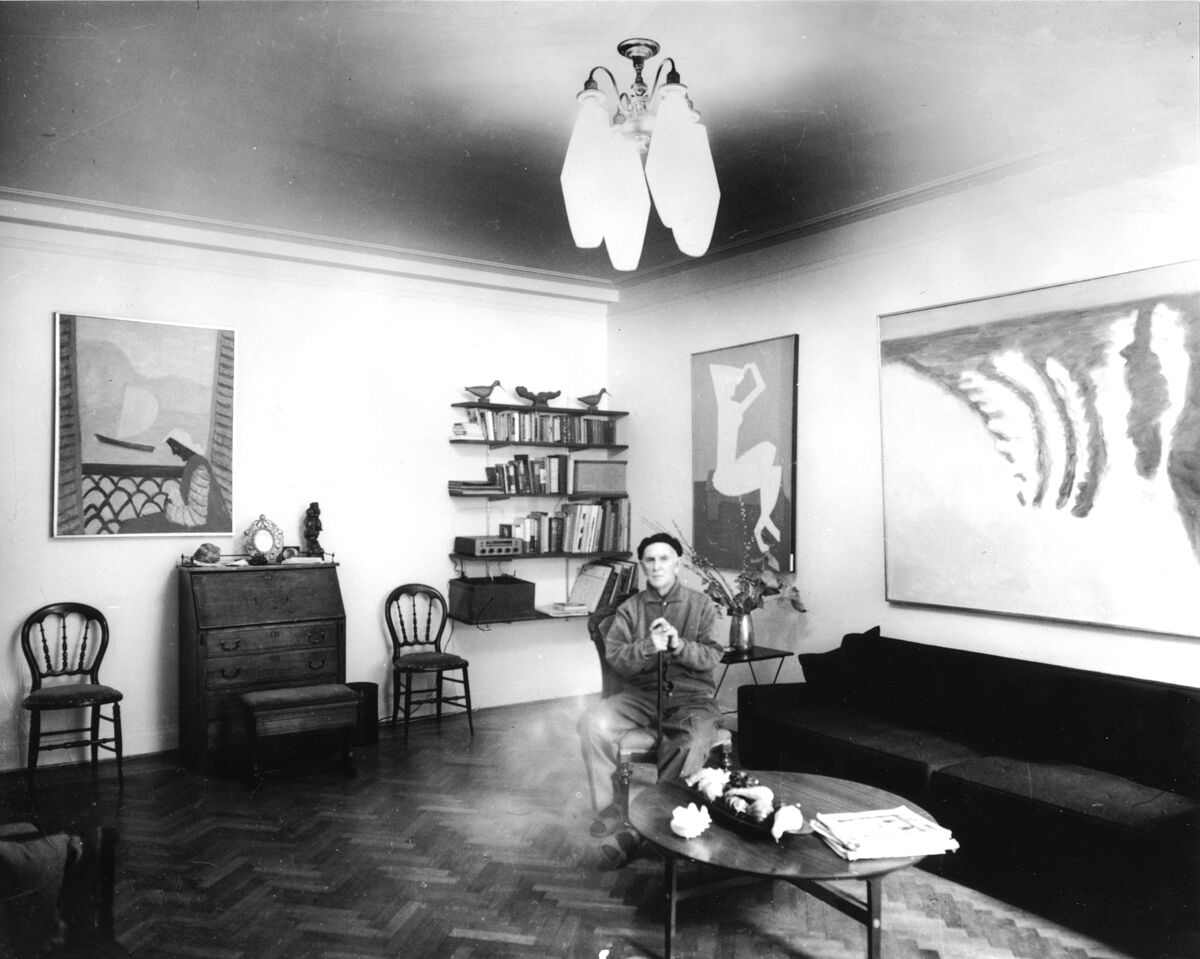 There’s a telling photograph of
Milton Avery
taken in 1945, when the artist was 60. Fine lines hug his neck, forehead, and eyes as he gazes off, a cigarette dangling out from beneath his mustache. Avery’s arms, not quite crossed, hold onto his shirt, as if he is giving himself a hug, and his soft gaze is more dreamy than assertive. The painter’s gentle presence resonates in the image, hinting at the rich emotional world hidden beneath his worn demeanor.
Known to many as the “American
Fauvist
,” Avery painted the world around him––his wife, Sally; daughter, March; and the landscapes they traveled to––in broad planes of poetically juxtaposed colors. In works like Checker Players (1943) and Cello Player (1944), Avery captured the human figure as a series of large, chunky shapes. Rather than rendering the details of his subjects, Avery found his voice in the hues he observed, and used his feelings as fodder to render the underlying atmosphere of a scene.
And yet, for much of his life, Avery’s career was eclipsed by
American Realism
and the rise of
Abstract Expressionism
; his work was too abstract for the academics and too representational for the AbEx scene. And despite his selling prices today (a painting can easily earn $3–$5 million at auction), he rarely sold work in his lifetime. Despite these difficulties, Avery continued to paint lilting abstractions of his family, shorelines, and forests until his death at the age of 79. The relentlessness with which Avery painted perhaps made sense given how accustomed he was to dealing with adversity, thanks to a youth frequently touched by death and poverty. 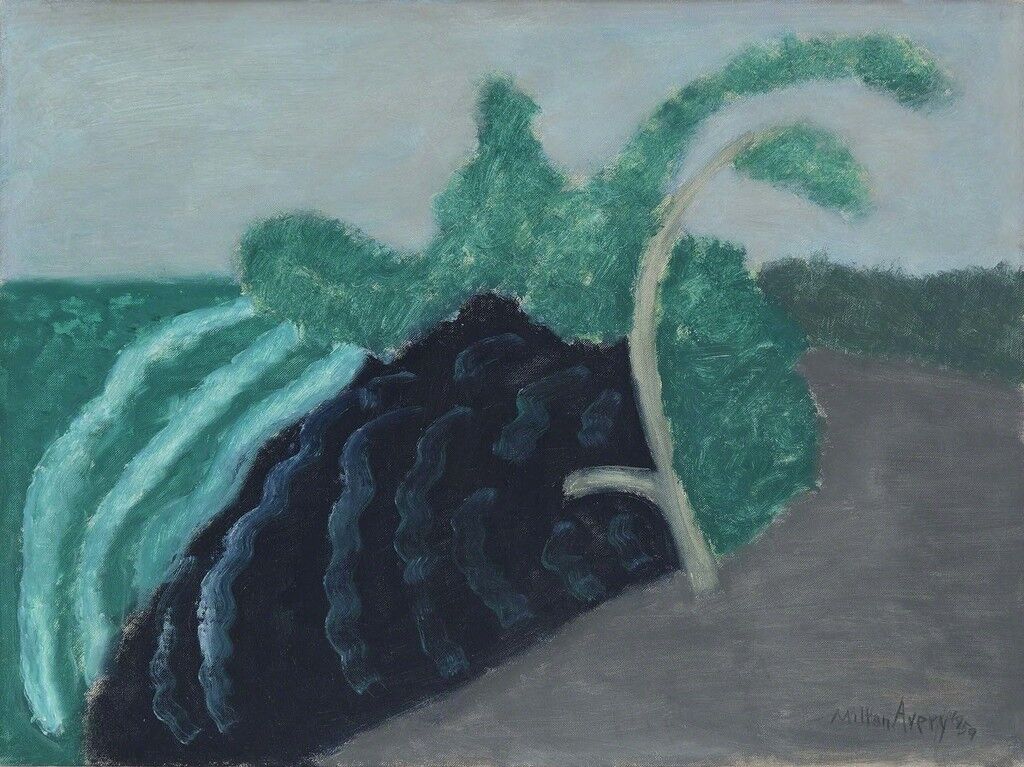 Milton Avery
Tree and Ocean, 1959
Michael Rosenfeld Gallery
When he was born in 1885, Avery’s family was dependent upon the income his father received as a tanner in the villages of Sand Bank and Altmar, New York. But in 1905, his father would lose his life in a freak wood-chopping accident, and over the next 10 years, all of his brothers would die—making him the sole male in a family of nine women. Avery would begin working in factories at age 16; his family would have to move into increasingly smaller living quarters due to strained finances.
Bored by the monotony of factory work, Avery sought out mental stimulation by taking night classes at a nearby art school. His passion for making was immediate. Avery’s family saw the usually withdrawn boy flourish. His sister-in-law took a nursing job to help support the family. With the added income, Avery was able to take a job as a file clerk at the Travelers Insurance Company, where his schedule (clocking in from 6 p.m. to midnight) allowed him to transfer to the School of the Art Society of Hartford.
Some biographers conclude that it was because Avery experienced death so frequently in his formative years that he turned to work as a defense mechanism against life’s uncertainties. As curator Barbara Haskell writes in her essay for Avery’s 1982 retrospective at the Whitney Museum of American Art: “He responded to this sense of temporality with an unrelenting compulsion to work, as if work itself would provide a deliverance from the terrors of everyday reality.” That attitude extended into his artistic studies, as well, where he constantly labored towards refining his painting to meet his teachers’ standards. Avery likened himself to a shoemaker––someone who worked diligently, night and day, regardless of mood or inspiration.
It was not long before Avery forfeited the rules of his American Realist teachers––who favored accurate portrayals of everyday subjects––for his own style. As his fellow artists painted textured landscapes with palette knives, Avery began injecting emotions into his images, favoring swaths of unusual color laid down with brushes. In a series of early watercolors, Avery took risks—blocking out whole areas of landscapes and figures with a single color, for instance. Though without the support of his peers or a stable income, it would take Avery decades to develop his signature style. And his pivotal shift away from purely academic art might not have happened at all if he hadn’t met his wife, fellow artist
Sally Michel
. 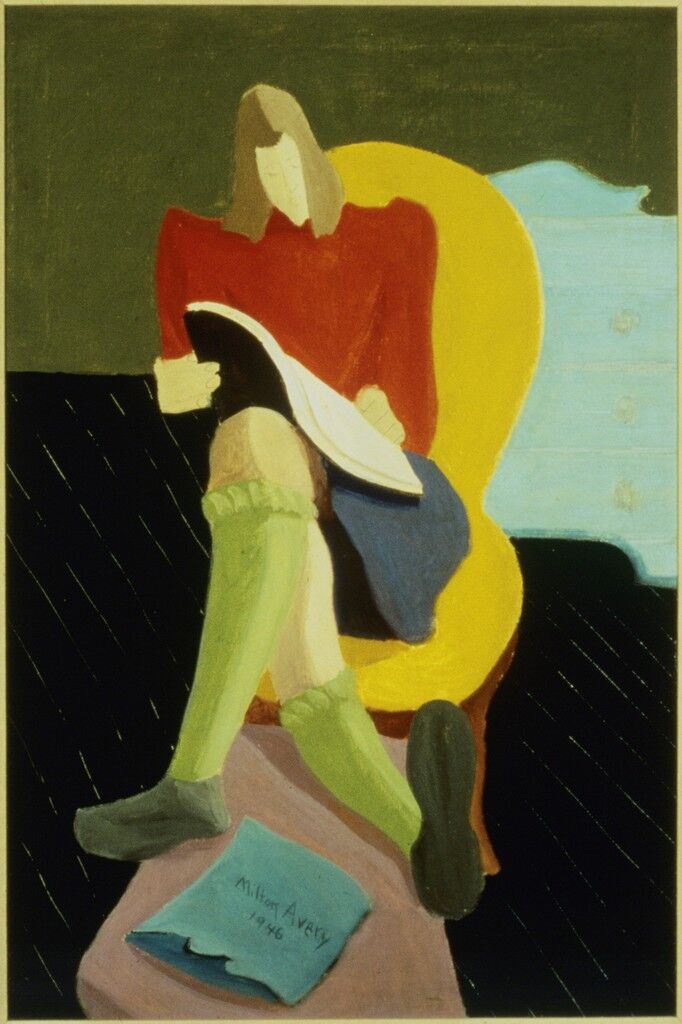 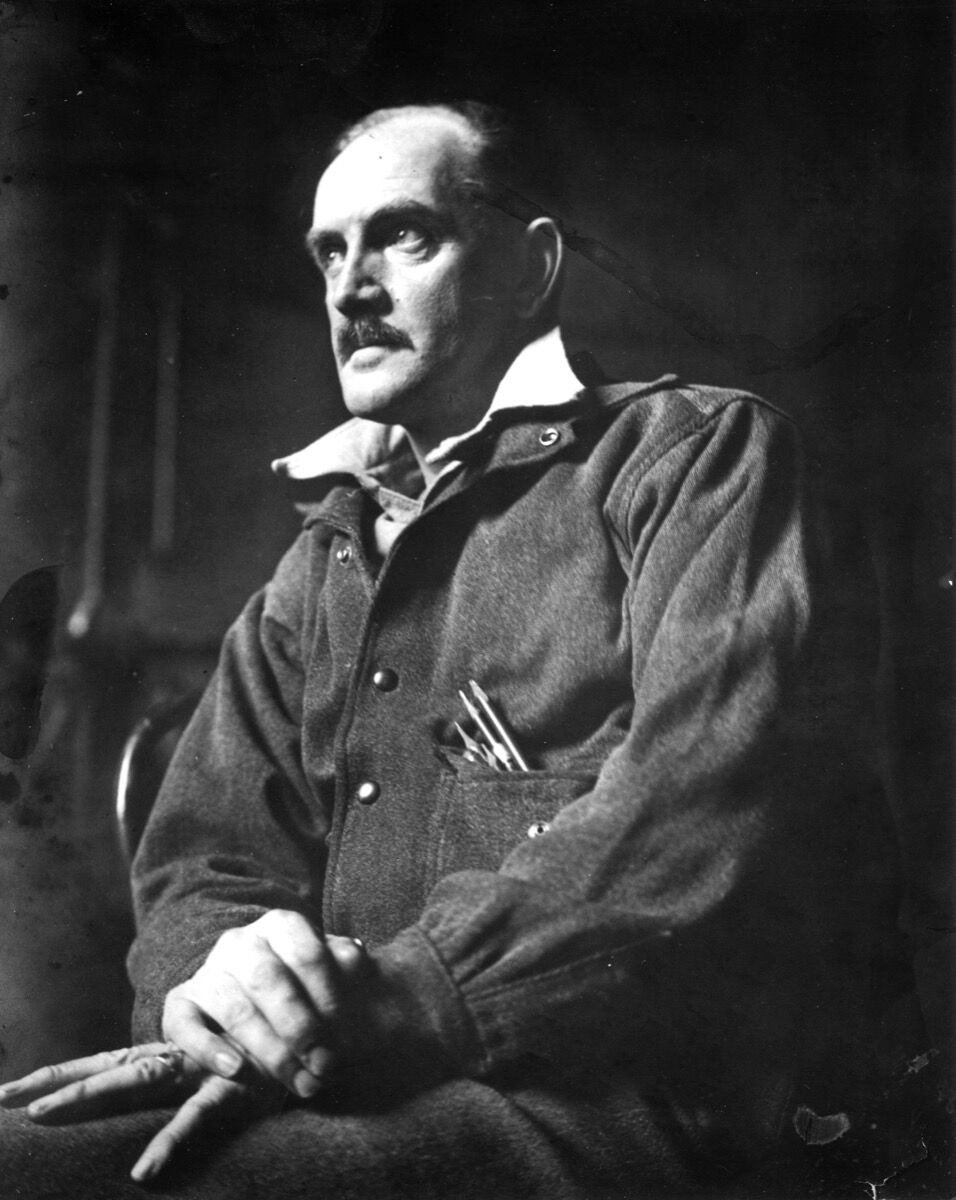 Advertisement
After Avery completed a residency at an art colony in Gloucester, Massachusetts, in 1924, the community offered him free accommodations as well as a studio. It was in the halls of the boarding house there that Avery frequently ran into his future wife in the hallway. Each day, both artists would rise early in the morning to work on their painting. As they began to casually converse, they realized how perfectly they complemented each other. Despite the fact that Avery was nearly 40 and Michel had just graduated high school, a romance developed. The pair relocated to New York City, and ended up marrying in 1926.
The New York art world introduced Avery to European modernism, and two artists in particular began to heavily influence his work:
Pablo Picasso
and
Henri Matisse
. During Avery’s first decade in New York, he would see both artists’ work at the newly opened Museum of Modern Art, as well as in exhibitions at popular galleries. Pulling from aspects of their paintings, Avery would hone his unique style. He incorporated more nuanced colors after seeing Picasso’s Rose Period works, and he enhanced his use of unrealistic color choices after observing Matisse’s handling of hue. Suddenly, Avery’s dusty blue hills began to vibrate, his pale green and yellow figures started to glow, and his pictures––despite always being drawn from observation––became even more abstract.
Despite Avery’s growing enthusiasm, finances continued to dictate his life and art. Michel, a successful magazine illustrator, demanded that she financially support the couple, so that Avery could focus on painting. But with the Great Depression looming, that meant sacrifices—like a barebones diet of peanut butter and Spam. The two artists would reuse friends’ discarded canvases; their studio apartment filled with fumes as they primed unsized cotton-duck canvas with white lead and rabbit-skin glue. The couple would even pool change from friends like
Mark Rothko
and
Adolph Gottlieb
, so that Michel could afford to cook hamburgers while the artists congregated in their home to discuss ideas.
By the time his first decade in New York was over, Avery was 50 years old and had still received little to no recognition. During these years, it was his friends and his wife who filled him with purpose, and encouraged him to continue painting. “Sally was an unflagging and optimistic supporter who served as an antidote to discouragement,” Haskell writes. “She prodded him when he despaired, telling him she did not want to be married to a bad painter.” To please Michel, as well as his inherent need to work, Avery continued to paint everyday––and eventually, his time came. 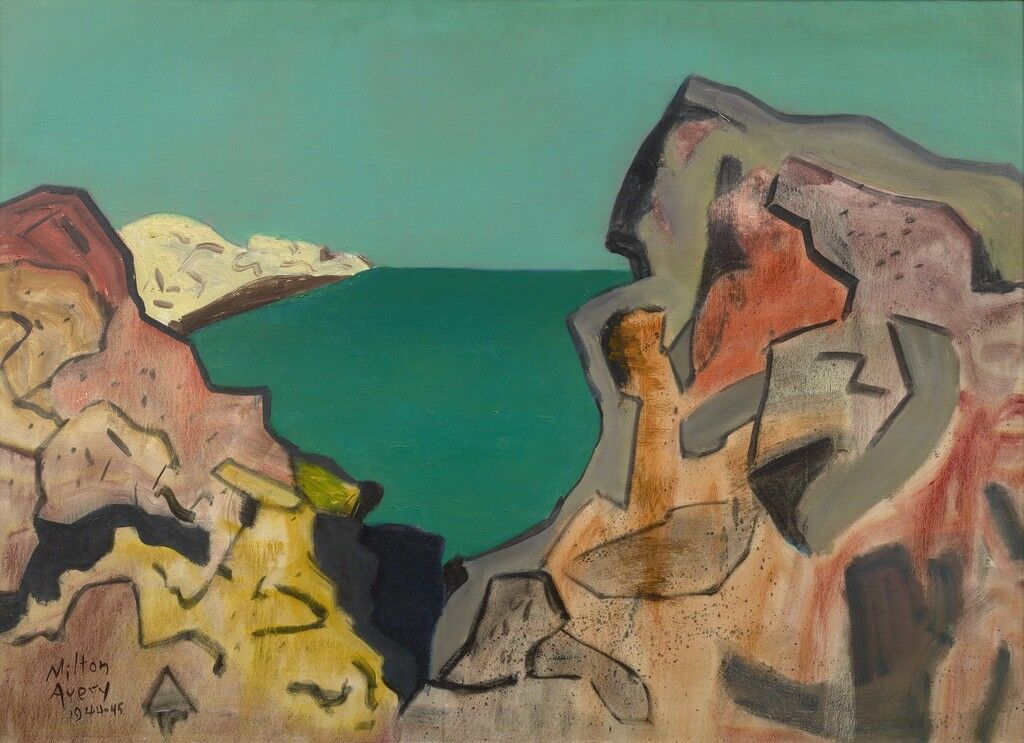 Milton Avery
Rocky Coast, 1944-1945
Debra Force Fine Art
In 1935, Valentine Dudensing signed Avery onto his gallery, which showed established European and American artists like Matisse,
André Derain
,
Joan Miró
, and
Bernard Karfiol
. Being inducted into such a high profile gallery gave Avery financial freedom for the first time in his life––and, in turn, his artistic exploration was catapulted forward. With a guaranteed income, Avery continued to delve into the avant-garde characteristics of his paintings.
Though his sales were slow, critics took to him kindly, and in 1943, an even larger gallery, Paul Rosenberg & Co., brought Avery onto its roster. Rosenberg purchased 50 paintings from Avery every year, which alleviated his financial worry; as a result, he had one of the most prolific years of his career in 1944. Paintings from this time forward forgoed decorative lines and brushy marks, and opted for canvases drenched in luminous, poetic displays of dense color and flattened shapes.
In Sketchers on the Rock (1943), Avery captures two figures perched atop a boulder in an eerily quiet Vermont landscape. The deep lavender sky is broken up with dark blue-green trees, and the sitters, painted in blocks of tans and oranges, blend into the muted greys of the ground. In Blue Trees (1945), Avery harnesses light-grey blues in the foreground, vibrating against the muted green in the background, to show the feeling of a lively, springing landscape. With every new painting, Avery became more significant in the eyes of his peers (though not many collectors followed suit). When the director of the Museum of Modern Art, Alfred H. Barr Jr., asked Rothko who he thought the most important artists of the moment were, he burst into laughter when Rothko named Avery.
A lack of sales would come to haunt Avery after he suffered a heart attack in 1949. The event left him with angina, a chronic chest pain that never subsided. Less than a year later, Rosenberg would viciously drop him from the gallery’s roster, selling his remaining stock of paintings––about 50 of them––to Roy R. Neuberger for a substantially low price, depressing Avery’s market severely. 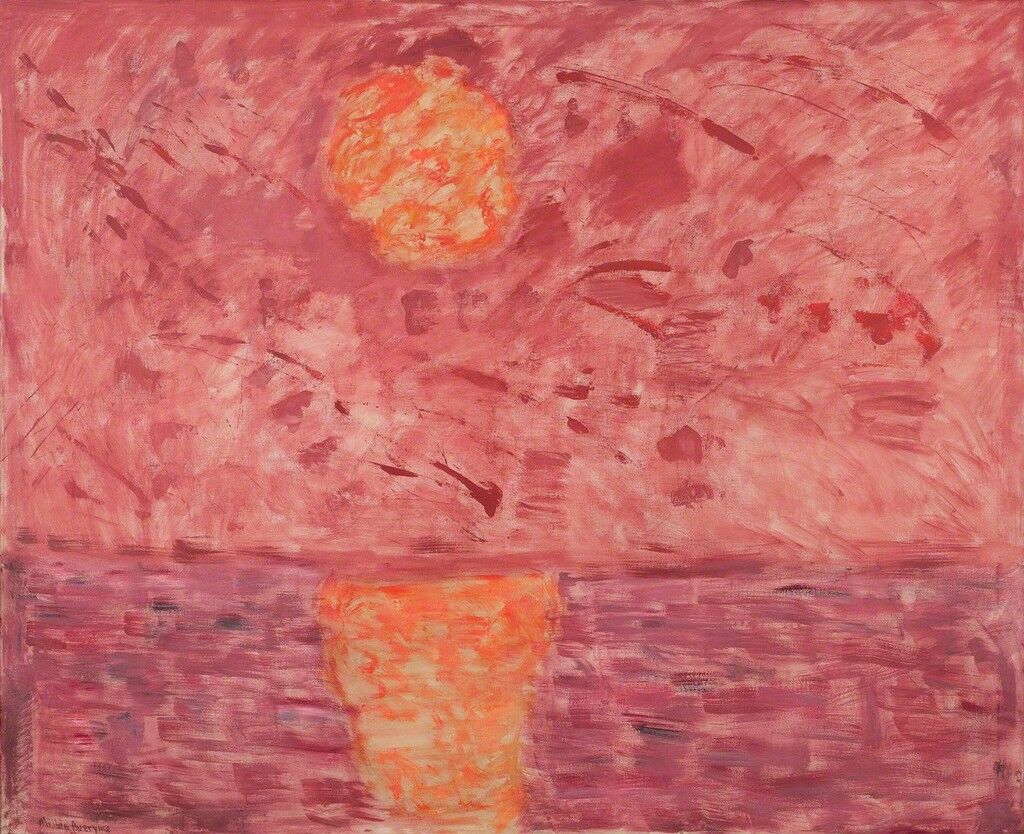 Milton Avery
Hot Moon, 1958
Michael Altman Fine Art & Advisory Services, LLC
To top off this dramatically awful string of events, Abstract Expressionism was on the rise to critical prominence––leaving Avery behind. In 1951, the artist would make a total of $50 in sales.
Under the shadow of chronic pain, illness, financial stress, and a seemingly doomed career, Avery retreated to a familiar coping mechanism: relentless work. Into the studio he went, tackling larger canvases and applying thin layers of paint to create the mottled colors of his late work. Waterfall (1954) and Tangerine Moon and Wine Dark Sea (1959) serve as fine examples of his minimal compositions, where unusual colors stand with new depth. In The White Wave (1956), two fields of navy are shattered by a jagged shape of white, whose bottom is cut off by a rounded shape of deep umber. The title suggests that we are looking at a wave crashing on the shore, but the curved form at the bottom shifts the picture plane into another dimension—one in which the wave of white could almost be a group of clouds, passing over a very simple earth.
Despite Avery’s lapses in sales and health, critics and artists continued to swarm him with affection. In December 1957, the influential critic Clement Greenberg penned an article on Avery in Arts Magazine that redirected his career’s course. This write-up spurred other favorable notices, and by 1960, Avery found himself in an unexpected place: standing in the middle of the Whitney Museum of American Art, surrounded by his own retrospective.
Hung across the museum’s walls was the work of his lifetime: from academic drawings to the watercolors that would foreshadow his famed aesthetic, and the paintings completed in his robust period of the 1940s. Closing off the exhibition was a pool of work made during the later years of his life, in which simplified compositions and sensitive colors depict a world unlike Avery’s own; an alternate reality full of tranquil, harmonious, balanced scenes––free of depression or illness. 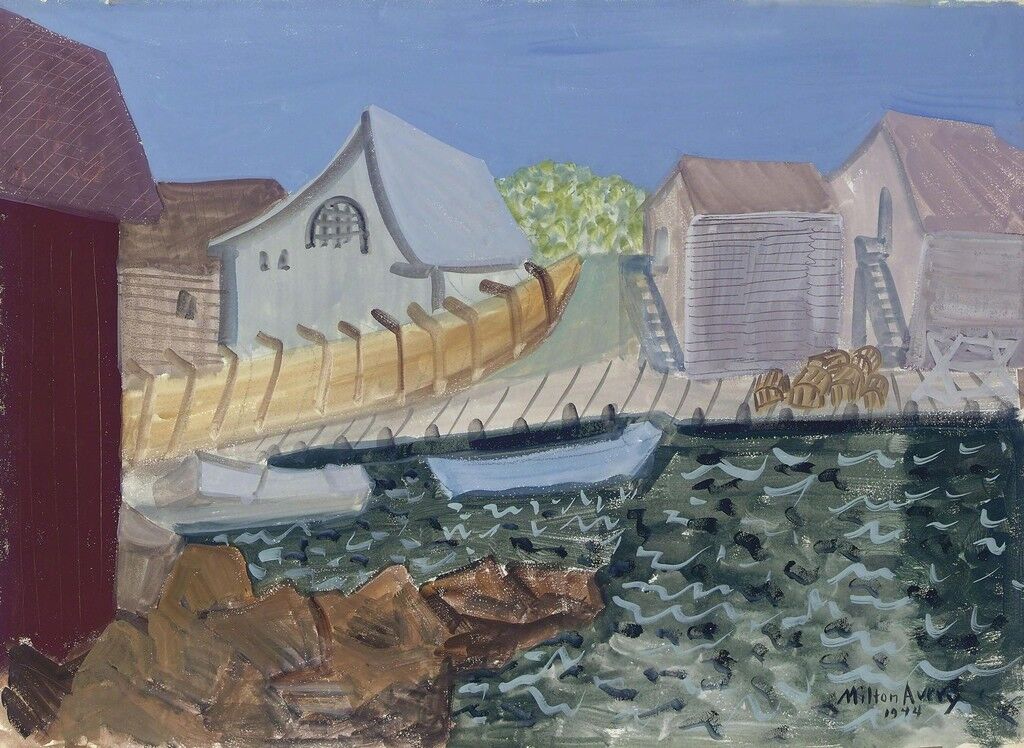 Milton Avery
Fishing Harbor, 1944
Hollis Taggart
“One feels looking at an Avery landscape or seascape that the highest human experience is being alone and at peace with the land and the sea,” writes Haskell. Indeed, Avery’s tangerine seas, ruby forests, and golden interiors offer the viewer an escape into rest and relaxation.
In the fall of 1962, Avery suffered a second heart attack that irreversibly damaged his health. In February 1964, he entered intensive care for 10 months, where he eventually died in his sleep. A group of over 600 artists and friends gathered for his funeral. At the service, Rothko delivered a touching speech on the artist’s life and legacy: “This conviction of greatness, the feeling that one was in the presence of great events, was immediate on encountering his work.…This conviction has never faltered. It has persisted, and has been reinforced through the passing decades and the passing fashions.”
“Avery is first a great poet,” Rothko continued. “His is the poetry of sheer loveliness, of sheer beauty. Thanks to him this kind of poetry has been able to survive in our time.”
Eli Hill