How Pac-Man Went from Arcade to Art Gallery

On Monday, it was announced that Namco founder and “father of Pac-Man” Masaya Nakamura had died on January 22nd at age 91. The Japanese company’s legacy has come to be defined by the success of its most popular arcade game, estimated to have been played more than 10 billion times in its 36-year history. But in 1980, when Namco first released Pac-Man, Nakamura could hardly have predicted that the little yellow puck would become an instant pop culture sensation. Or that, some three decades later, it would enter the collection of New York’s Museum of Modern Art.
Pac-Man’s journey from arcade to art gallery began, innocuously enough, with a pizza. As the story goes, Namco engineer and game designer Toru Iwatani modeled his game’s protagonist after a pie with a single slice missing. The Pac-Man name itself was derived from the Japanese slang term “paku paku,” which represents the sound of a mouth opening and closing while eating. (Originally, the game was titled “Puck-Man,” but it was changed for American audiences in the fear that vandals would change the “P” to an “F.”) The resulting game fittingly tasks players with eating all of the dots in a maze before proceeding to the next round.

From the start, Pac-Man was meant to be different. Video games in the late 1970s—including Space Invaders and Missile Command—were predominantly focused on themes of war and violence, and this tendency had alienated female audiences. Toru wanted to create a game that appealed to both men and women and designed a pastel-colored palette for this purpose.
The game was only a moderate success in Japan, where the majority-male gamers weren’t quite sure what to make of it. But in the United States, it was a smash hit. “It was the first type of video game where we saw real appropriation of the content into popular culture,” says Chris Melissinos, creator and guest curator of the Smithsonian American Art Museum’s 2012 exhibition “The Art of Video Games.” Pac-Man graced everything from pajamas to BIC lighters to TV trays, even inspiring the single Pac-Man Fever that would hit the Top 40 charts. “It was the first time video games took this leap beyond the arcade, beyond the screen, into the broader popular culture. That changed the way the world looked at video games and understood that there was something bigger happening here than just a place to waste a quarter.”
Pac-Man’s significance to game designers was also critical. Not only was it the first to establish a narrative, which played out in mini-cartoons between levels, it also featured characters with distinct personalities. “Pac-Man changed the way artists looked at the type of games they could create, it changed the way people viewed video games, and it broadened the audience that had historically been dominant in arcades,” Melissinos explains. “So it kind of changed everything at the time.”

Advertisement
Pop cultural acceptance of Pac-Man may have been instantaneous in the U.S., but it would be decades before video games garnered a stamp of approval from art institutions. It’s only been in the last five years that significant steps have been taken to examine some of these works in the context of a museum—a decision that has also sparked controversy.
Melissinos has been at the forefront of this debate since 2009, when he convinced the staff of the Smithsonian that video games were an art form worthy of an exhibition. “Video games, because of their nature as an interactive medium, demand more of us as the participants in understanding what it is they’re trying to say,” he argues. “Unlike a book, which can be read in a couple of days, or a movie, which can be consumed in an hour and a half, there are video games that may take 60, 80, 100 hours, or even years to complete. Within video games you find all forms of traditional art: painting, sculpture, narrative, orchestration, artistic intent. But together they transcend any one art form to become something greater.”
His argument took six months, but in the end the museum commissioned a show that would become “The Art of Video Games.” That exhibition opened at the Smithsonian in 2012, the same year that MoMA announced its acquisition of 14 video games for its design collection—Pac-Man among them. MoMA’s decision prompted outrage from some art critics (The Guardian’s Jonathan Jones was particularly blunt: “Sorry MoMA, video games are not art”).
Paola Antonelli, senior curator of architecture and design at MoMA, welcomed these criticisms. “Even in the 1930s, my colleagues that were trying to put together an abstract art show had all of these works stopped by the customs officers that decided they were not art,” she noted in a TED Talk. “So it’s happened before, and it will happen in the future, but right now I can tell you that I am so, so proud to be able to call Pac-Man part of the MoMA collection.” 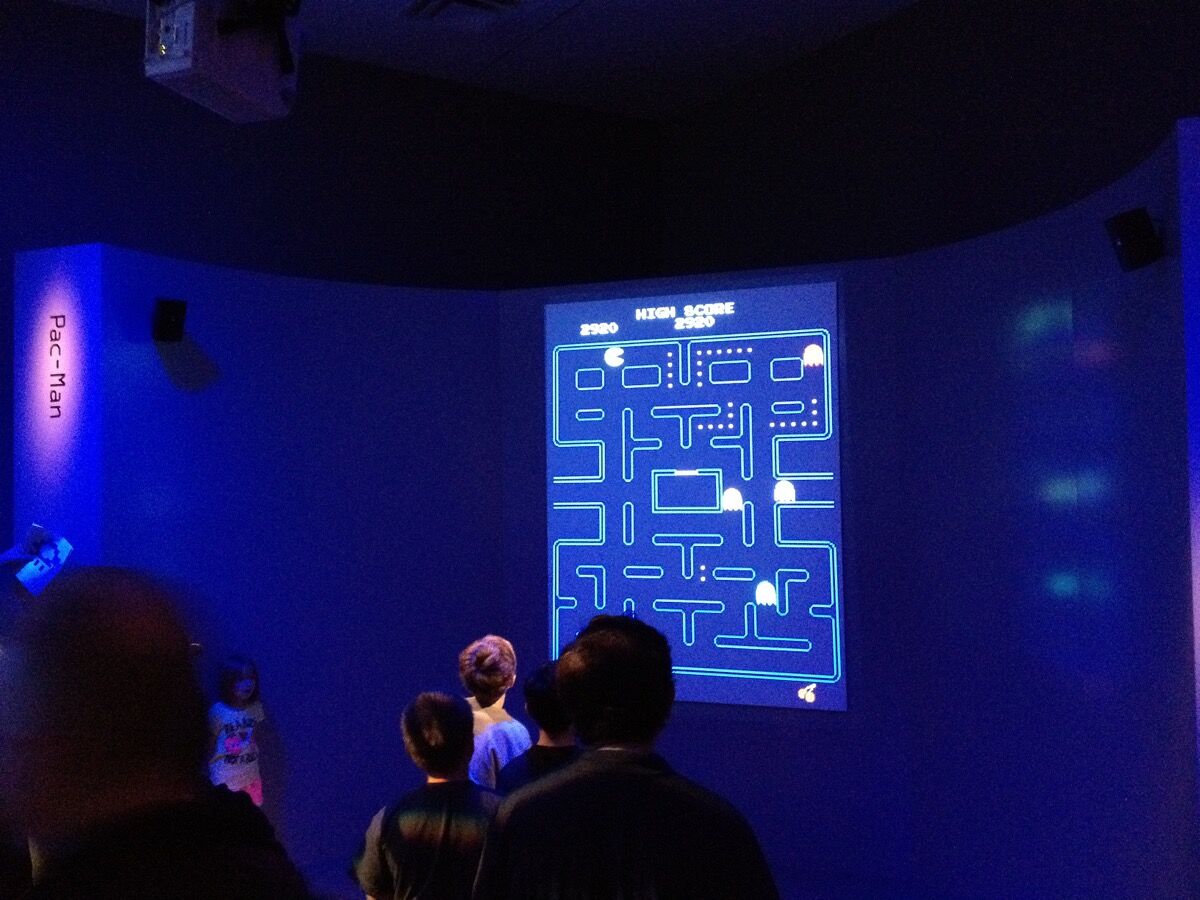 Opening weekend of “The Art of Video Games” at the Smithsonian American Art Museum, 2012. Photo by Blake Patterson, via Flickr.

But accepting video games into museum collections is only the first step in understanding them as art. Institutions are now experimenting with the proper way to display them: At the Smithsonian show, consoles were visible, while at MoMA, they were not. Antonelli compared MoMA’s strategy to an exhibition organized by
Philip Johnson
in 1934, in which he displayed propeller blades and pieces of machinery on white pedestals against white walls in the MoMA galleries, “as if they were Brancusi sculptures. He created this strange distance, this shock, that made people realize how gorgeous formally, and also important functionally, design pieces were,” she said.
Antonelli would like to do the same with video games: “By getting rid of the sticky carpets and the cigarette butts and everything else that we might remember from our childhood, I want people to understand that [the games] are important forms of design.”
The future of the medium looks promising. MoMA, for example, acquired six more games and one gaming console in the summer of 2013. Last year, Wellesley College’s Davis Museum organized the first museum solo show for a video game designer with their retrospective of Jason Rohrer’s work. And as John Maeda noted in an op-ed for Wired, the field is still evolving. “I wouldn’t be surprised if MoMA’s initial videogames acquisitions aren’t the right ones,” he wrote. “Especially if you consider how MoMA’s entire collection has evolved over the years. Only time will tell if these 40 videogames...will grow or fade.”
But Pac-Man, in particular, seems poised to endure. “At the end of the day, the iconic yellow circle with the wedge mouth just kind of transcends time, it transcends a particular period,” Melissinos says. “Its gameplay holds up as well today as when it was first released in 1980. It really speaks to the purity of the game’s construct, it speaks to the artistry of Toru Iwatani in creating these characters that have endured.” Pac-Man, as a reminder of the early innovation in video game design, may also be the perfect symbol for the museum of the future.
Abigail Cain
Related Stories