How the Paint-By-Numbers Inventor Inspired Americans to Paint 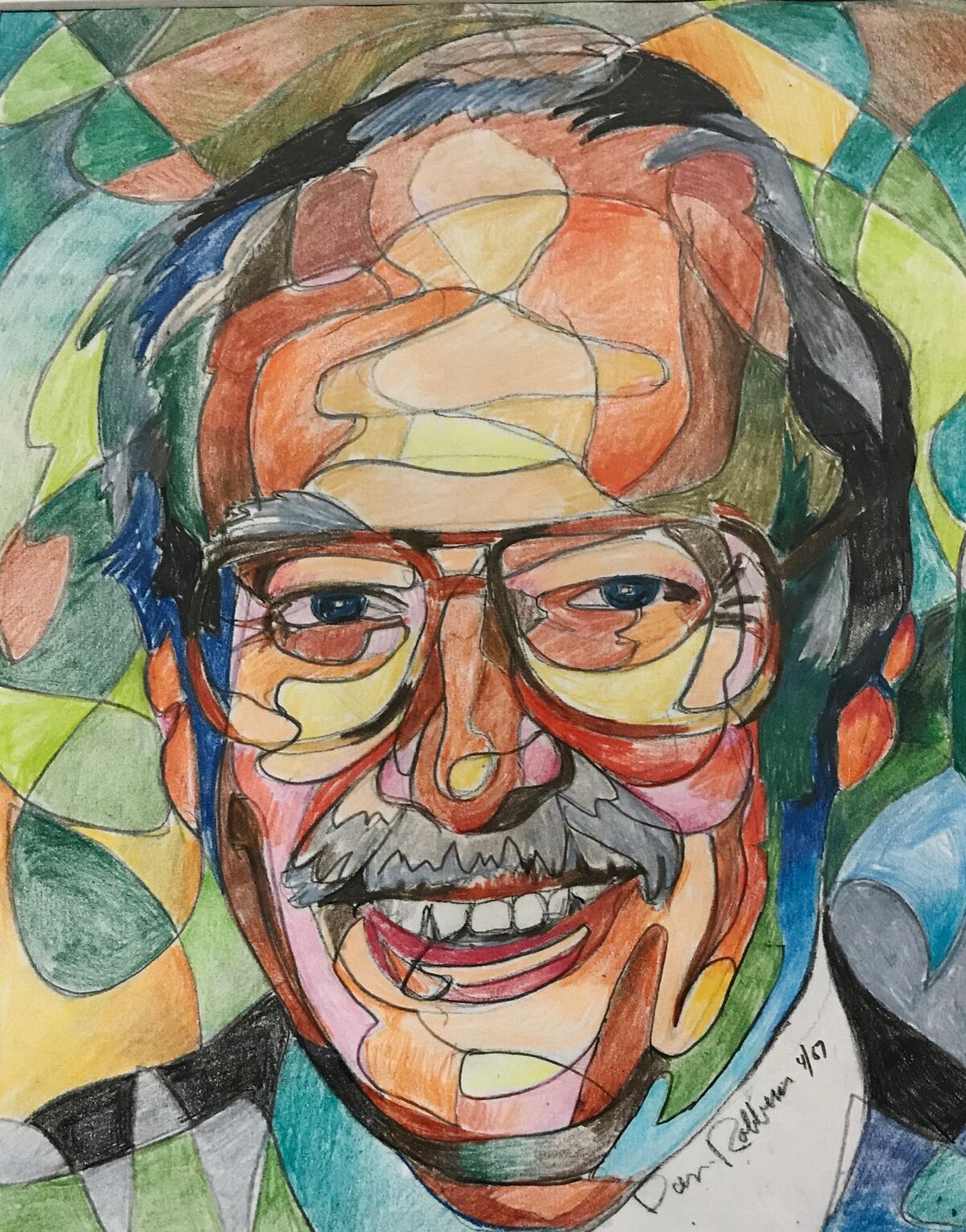 Before Bob Ross, America had “paint by numbers,” a hobby that brought the concept of a coloring book to canvas. When it was popularized in the 1950s, it took the country by storm, making painting accessible to millions of Americans who might have otherwise avoided picking up a brush. With packaging that boldly proclaimed “every man a
Rembrandt
,” paint-by-numbers kits were derided by cultural critics. They deemed it a symbol of “mindless conformity gripping 1950s America,” as the Smithsonian wrote in a text for its 2001 exhibition, “Paint by Number: Accounting for Taste in the 1950s.”
But while paint by numbers was an influential cultural touchstone of the mid–20th century—and survives as a popular pastime today—its late creator remains largely unrecognized.
Dan Robbins, a commercial artist and passionate Sunday painter, masterminded paint-by-numbers kits in the early 1950s. Based in the auto mecca of Detroit, he got his start working for H.B. Stubbs Co., a subcontractor of General Motors, which produced its iconic “Motorama” exhibitions at Chicago’s Museum of Science and Industry. He also worked for Chevrolet’s art department, creating lettering for internal flip charts and motivational materials. 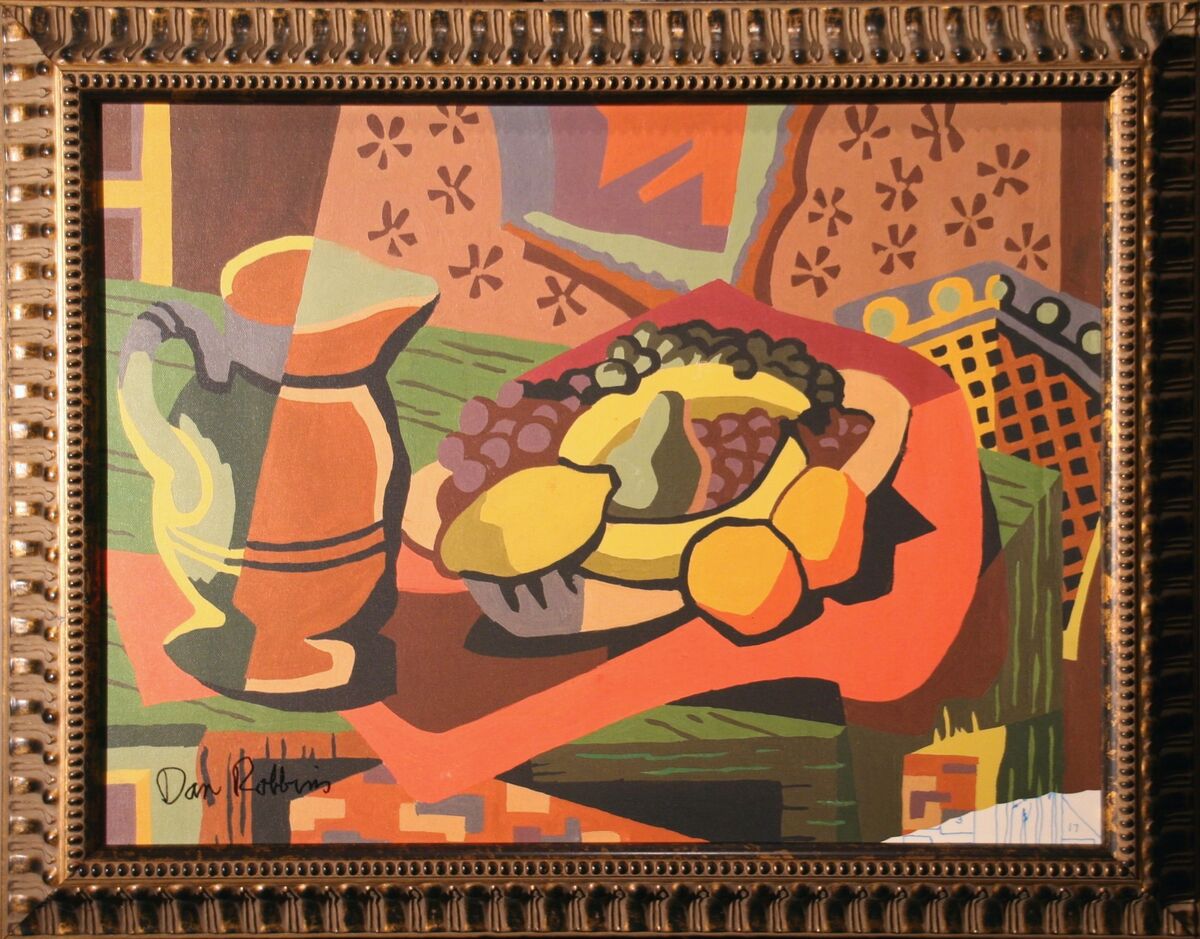 But it was Robbins’s move to Palmer Show Card Paint Company, in 1949, that led to his first big break. The company’s founder, Max Klein, had given Robbins a mission: sell more paint. His solution was paint by numbers. The activity tapped into the post-war American public’s newfound leisure time. With the war behind them and a fast-growing economy bolstering their quality of life, Americans discovered both time and energy to devote to hobbies.
Robbins’s concept was straightforward: a kit that would allow anyone, even those who’d never taken an art class, to create a detailed painting. Using his knowledge of how to build a readable composition by layering and arranging colors, he devised a technique to simplify the process. To create each kit, he first painted an original artwork. Next, he placed a plastic sheet over it, upon which he outlined its forms and shapes, assigning a number and corresponding color to each of them. In this way, paint by numbers was born.
The first paint-by-numbers kit that Robbins proposed to Klein riffed on the era’s
Abstract Expressionist
movement, with a piece called Abstract No. One. But abstraction turned out to be less marketable than landscape, still life, and figuration, and the paint company quickly veered in a more traditional direction. Popular kits bore titles like Fishermen, Mt. Matterhorn, and The Bullfighter. Some were more complex than others, allowing more ambitious hobbyists room for growth; kits for beginners may have had 20 colors, for instance, while sets for more advanced practitioners offered 30 to 40. The cover of Dan Robbin’s self-illustrated autobiography, Whatever Happened to Paint-By-Numbers?, 1997. Courtesy of 20 North Gallery. 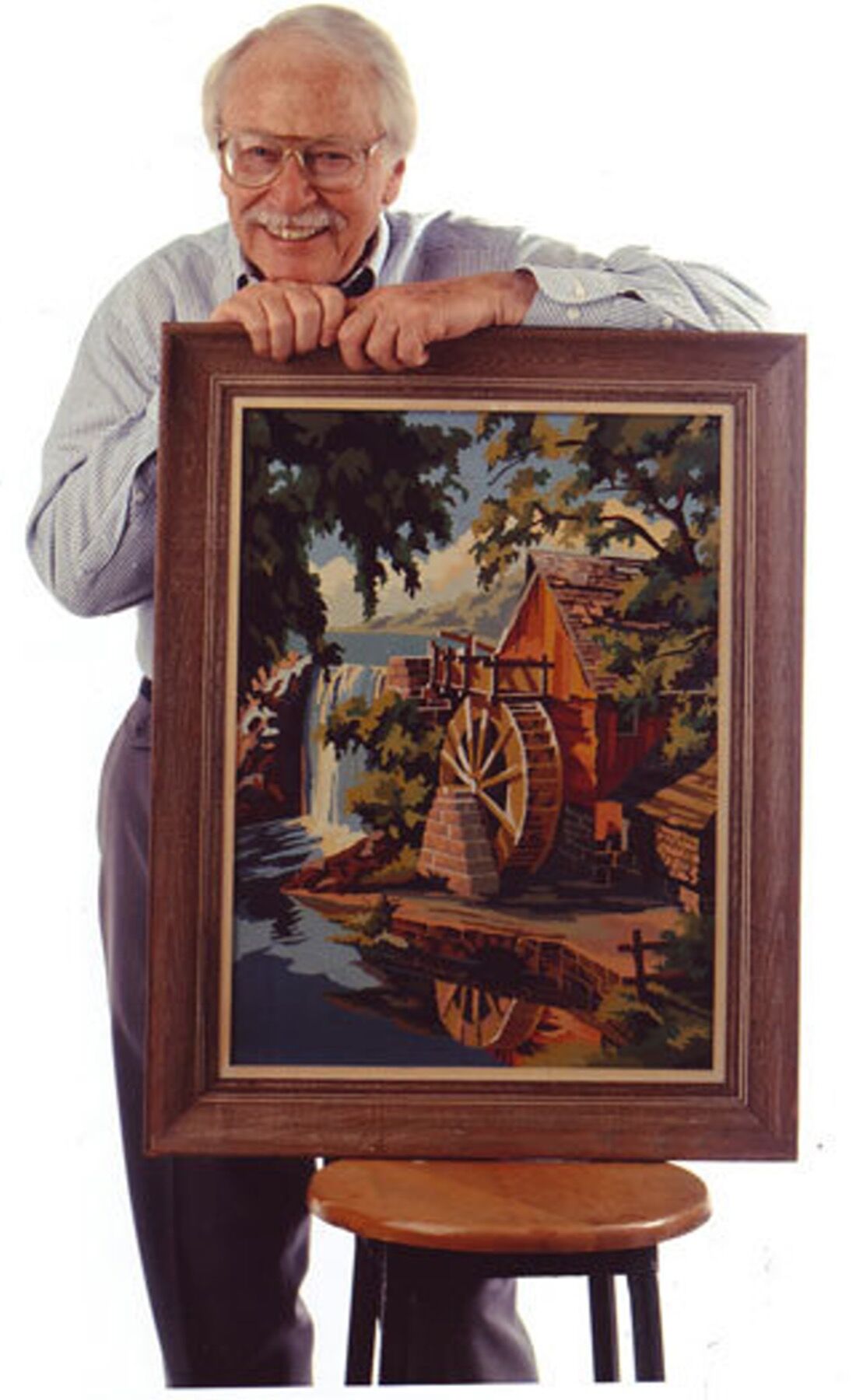 Advertisement
Americans took the bait, and in 1955 alone, they bought 20 million paint-by-numbers kits, flooding homes across the country with amateur paintings. “Paint by numbers was viral before there was viral,” recalled Skip Davis, a graphic designer who is also an avid collector of paint-by-numbers kits. “It was bigger than hula hoops and bigger than TV dinners.”
At the time, fans gushed about their newfound hobby to popular magazines like American Artist: “Why oh why didn’t you or someone else tell me before this how much fun it is to use these wonderful ‘paint by number’ sets?” said one anonymous enthusiast. “[I] am on my fifth set and just can’t leave them alone.” Paint-by-numbers canvases even made their way into the White House; President Eisenhower’s presidential appointment secretary, Thomas Edwin Stephens, assembled a gallery of the pieces made by administration officials.
Other responses to the flourishing pastime were less flattering. On the opposite side of the argument, one anonymous critic wrote a passionate invective in American Art: “I don’t know what America is coming to, when thousands of people, many of them adults, are willing to be regimented into brushing paint on a jig-saw miscellany of dictated shapes and all by rote. Can’t you rescue some of these souls—or should I say ‘morons’?” 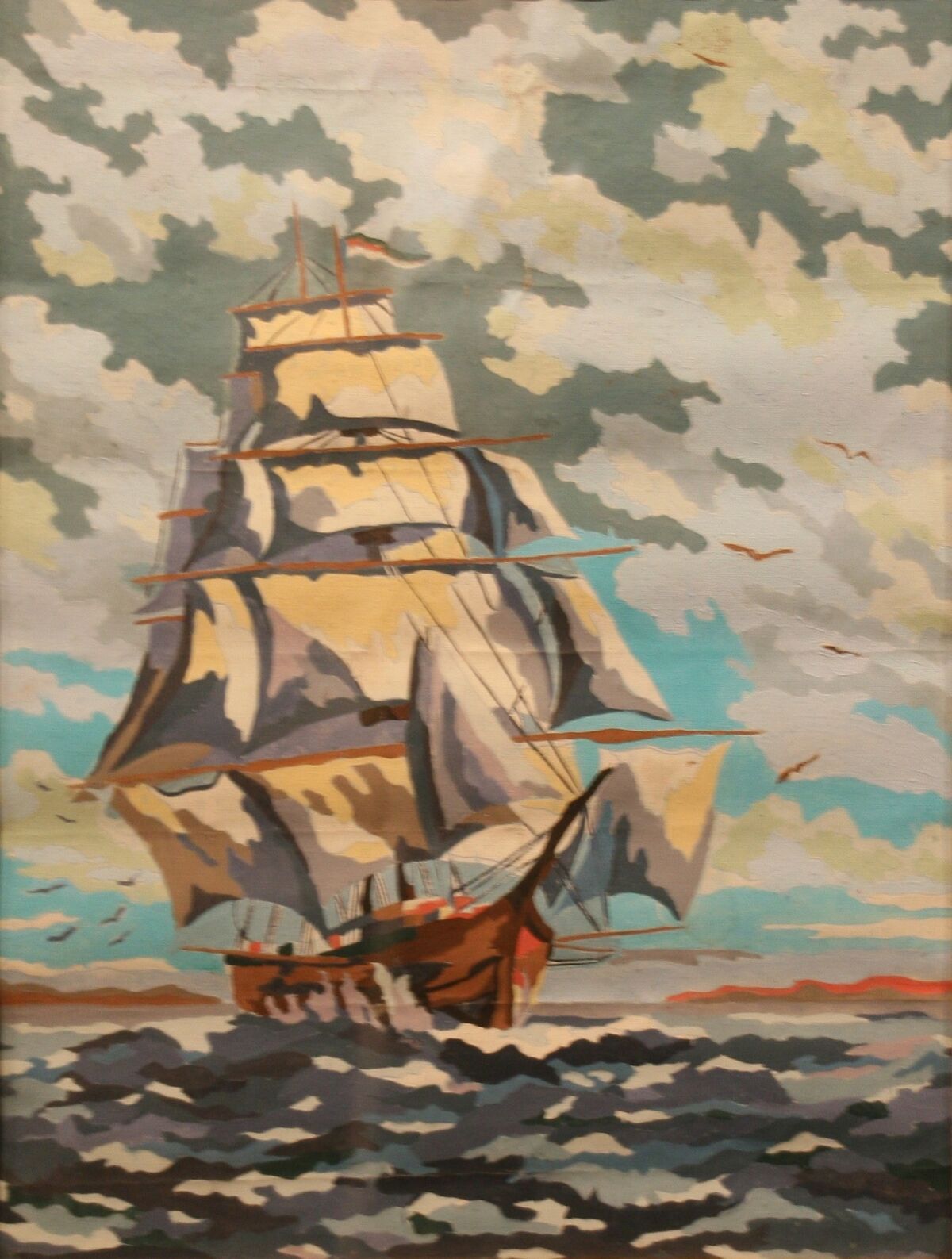 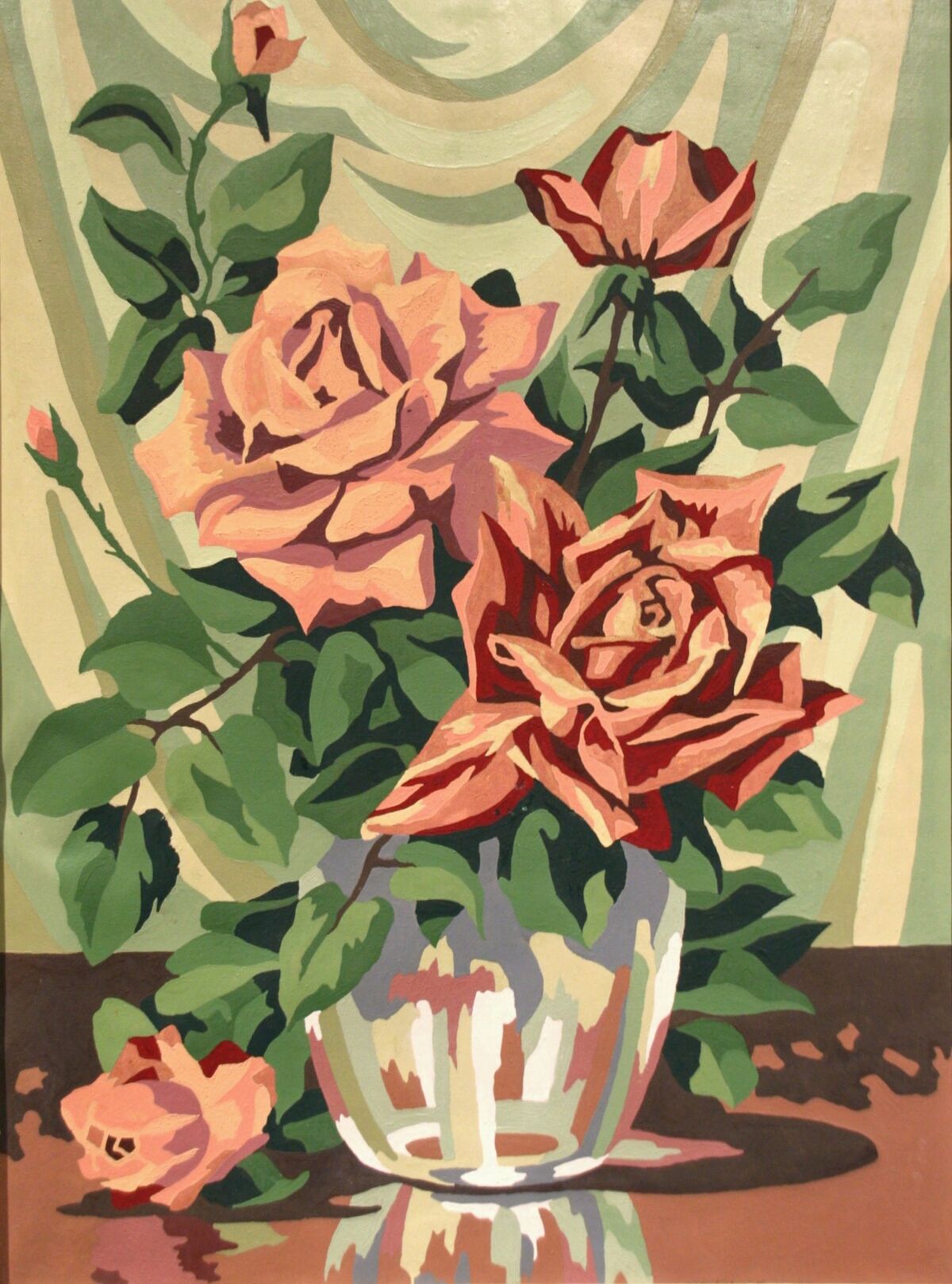 The burgeoning
Pop art
movement even appropriated paint by numbers as a commentary on the commercialization and commodification that defined 1950s popular culture.
Andy Warhol
riffed on the kits in his 1962 “Do-It-Yourself” series.
For his part, Robbins didn’t engage in the controversy. “I don’t think dad ever really got too caught up in the back and forth of whether paint-by-numbers was considered art or not,” his son, Larry Robbins, recalled. “It gave an individual who would never have the opportunity to paint a beautiful picture the chance to experience art.”
Robbins weighed in on the question in his 1998 memoir Whatever Happened to Paint-By-Numbers? with a balanced response. “I never claim that painting by number is art,” he wrote. But he also celebrated his creation’s ability to introduce art to the masses: “It is the experience of art, and it brings that experience to the individual who would normally not pick up a brush, not dip it in paint,” he continued. “That’s what it does.”
Alexxa Gotthardt
Related Stories