Charlotte Jansen
Jun 17, 2016 11:14am
In Africa, homosexuality is illegal in 34 countries. Beyond the constitutional problems, homophobia is endemic: “Corrective” rape, brutality, and murder are tragic daily realities. In 2014 in Uganda, many LGBTQ individuals fled the country as a motion was introduced to enforce the death penalty for homosexual acts, which is also the situation in Nigeria, where even associating with individuals who identify as LGBTQ can lead to incarceration. As a consequence, many Ugandans fled to Nairobi—for some time the Kenyan capital had been considered a place of refuge from conflict and persecution in neighboring countries. Though not welcomed by Kenyan society, the new members of the LGBTQ community living in Nairobi have increased their presence, pushing civil rights to the fore. In April, a campaign group filed a case to Kenya’s High Court, urging the decriminalization of homosexual acts; yet just this week, in an appalling blow to the campaign, a Kenyan court upheld the right to perform anal examinations to determine a person’s sexual orientation. 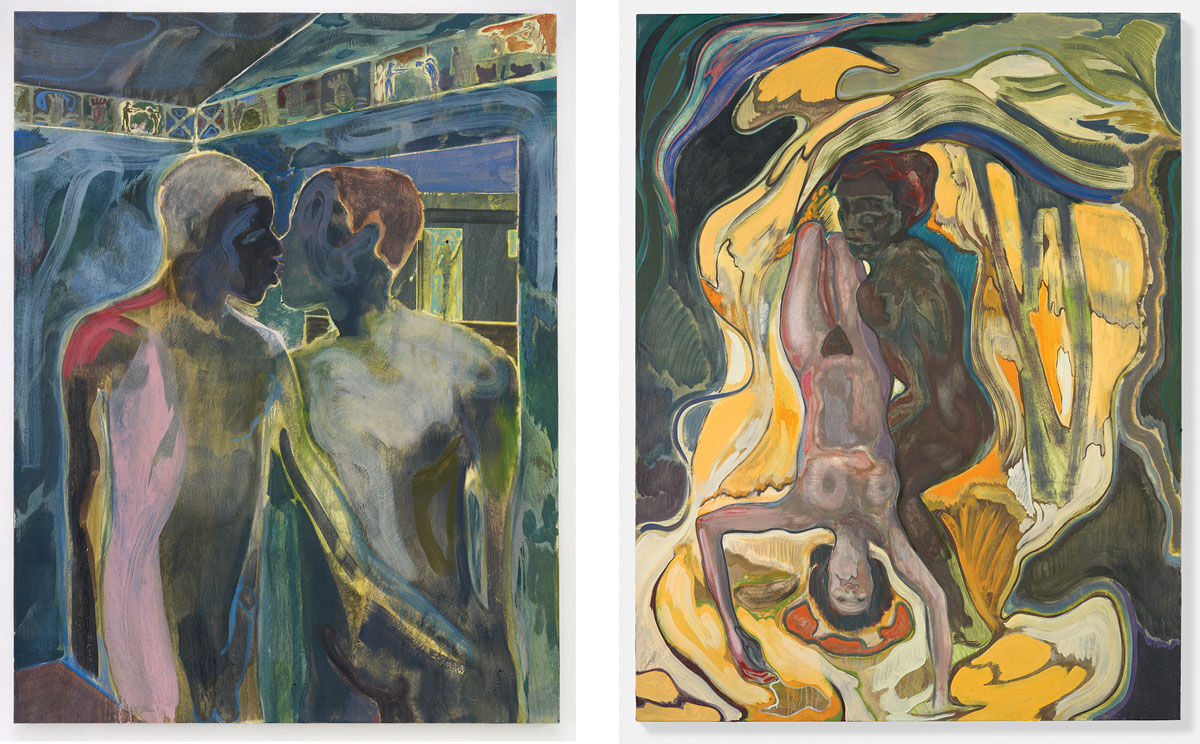 In late April in the U.K.,
Michael Armitage
, an artist from Nairobi who is now based in London, debuted his painting Kampala Suburb (2014), as part of the current group exhibition “Imitation of Life: Melodrama and Race in the 21st Century” at HOME in Manchester. Kampala Suburb, picturing two men in embrace, references the structure of a hieroglyph from ancient Egypt—the oldest two-dimensional art forms from the continent—and in the background, a frieze, taken from an image of an execution in Somalia. “Although this was not LGBTQ related, I wanted the risk of violence to the couple to be in the painting, as members of the LGBTQ community have been repeatedly harassed, attacked, mutilated, or killed for who they are,” Armitage tells me during a phone conversation. “It was important to have a sense of the risk of this private and basic intimacy within the painting, as the hostility towards the LGBTQ community extends into their private space—the current situation [in Kenya] is that neighbors who suspect men or women of being gay will attack them or accuse them of committing homosexual acts that are punishable by up to 15 years in prison.”
Kampala Suburb speaks directly to the widespread notion that homosexuality is “un-African.” If the bill does pass at the High Court, it will mark the beginning of a cultural shift in Kenya. “It was exciting to show the work in that exhibition at that particular time, as Kenya is on the verge of becoming one of the most progressive African countries with regards to our national law’s inclusions of LGBTQ rights,” the artist explains.
Armitage, who presented his first solo exhibition at White Cube, London, last spring, has not encountered these issues directly himself, but following a conversation with a friend who asked about the gay scene in Nairobi, he began to reflect on attitudes that are profoundly entrenched there. “My instinctive reaction was to tell him to keep a low profile,” he explains. “Later, I thought about what I had said, and that I never question these attitudes at home.” 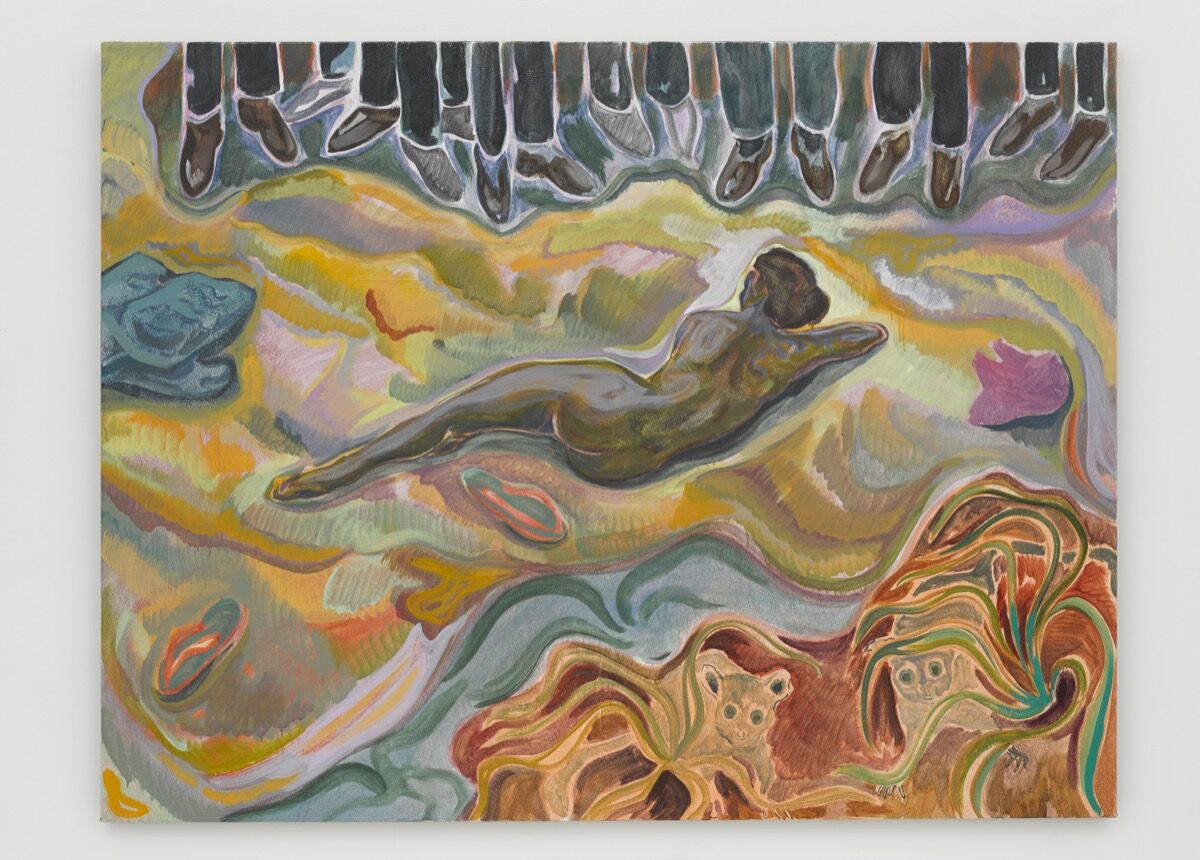 Advertisement
Questioning Kenyan culture in the here and now has become paramount for Armitage. Although the parameters in which his work can be understood are broader than geographic boundaries, his impulse is local. He chooses images carefully with a Kenyan audience in mind, and the works directly reference major events in the country and consider the aftermath, where there is often potential for change. At first blush, the paintings seem to be entangled with personal and collective trauma—a plane crash Armitage experienced as a teenager, or the Mpeketoni and Westgate shopping mall attacks, for example. But interwoven with reality are allusions to regional mythology, symbols, and traditions. Armitage considers the works to be ultimately optimistic; in the conditions of contemporary culture, images fuel actions.
His painting #mydressmychoice (2015), for example, refers to the assault at a bus station in Nairobi in November 2014, where a woman was stripped and molested by a group of men because of the clothes she was wearing. When video footage of the assault went viral, it sparked demonstrations in the capital. In Armitage’s painting, a woman reclines in a classical pose reminiscent of traditional western nudes. The inherent beauty of the painted figure is a self-inquiry into the problematic conjecture of the image. “This is my culture that does this to women—do I have to own this too as part of my culture?” Armitage asks. Though he addresses issues such as LGBTQ and women’s rights, prostitution, and terrorism through his paintings, Armitage doesn’t consider himself an activist. “I’d never claim to be an activist for any issue,” he says. “It’s very important to me in developing my practice that my works are relevant in the cultural space, and I try to find a way for the paintings to have a place within society at home. I am not a politically motivated artist but my paintings consider different social and cultural issues that I come across: They’re questions I ask myself, questions I pose to culture at home and to the viewer.”
African cultures have long been exoticized by the voyeuristic or colonial gaze of western painters, contributing to the creation of what the Nigerian novelist Chimamanda Adichie refers to as a “single story.” When Armitage moved to England to study (he earned a B.A. in Fine Arts at the Slade and a postgraduate diploma from the Royal Academy Schools), he experienced this directly. For example, he was asked repeatedly by professors if he had read Joseph Conrad’s Heart of Darkness. From his studio in London, Armitage’s observations from living abroad are expressed in the language of his painting, which mixes local iconography from the region with tropes from the European school he trained in.“My paintings play with the perception of a place, they deal with the identity of a place—the place being home—and I try to build a language in the work that includes signifiers of western art history, where foreign places are exoticized and dumbed down. I use that and turn it on itself,” he explains. “I have to chuckle to myself when someone says it doesn’t look authentically African, because the idea of looking from the outside is really important in the work, as are those tensions between local culture, history, and art history.” 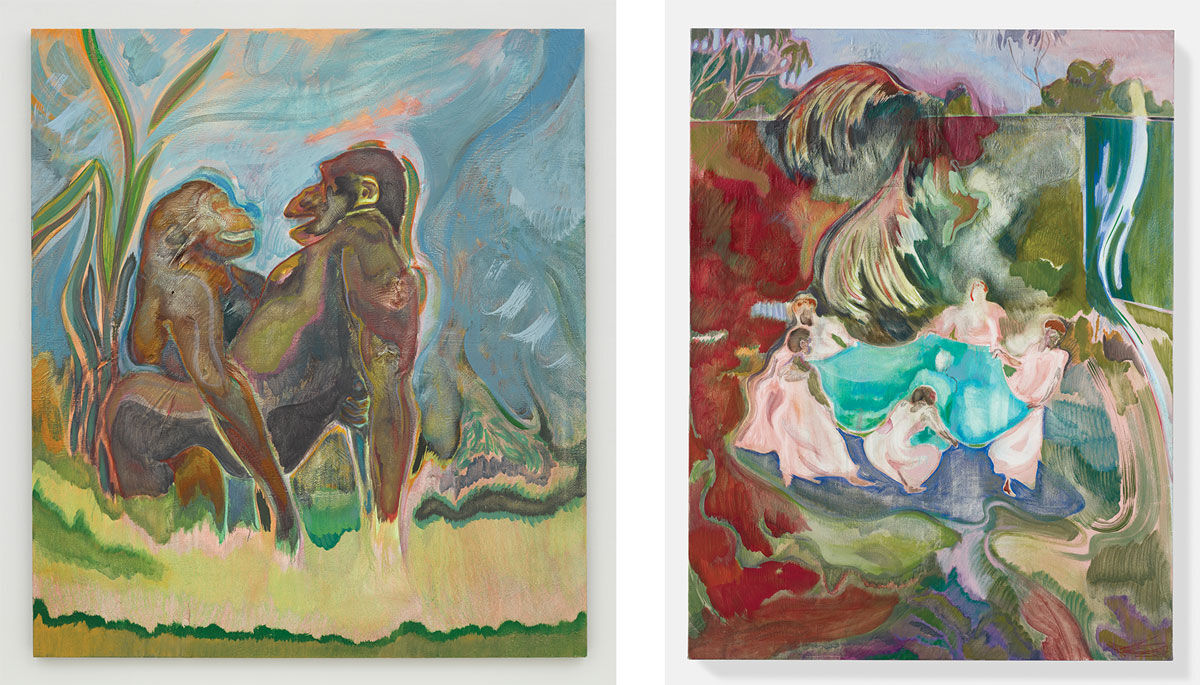 Preserving Kenya’s rich cultural history through his art—much of which has been undocumented in the past—is as important to the artist as showing the work in Kenya to a Kenyan audience, something Armitage hopes can happen in the near future. He belongs to a generation of artists who are raising the specific cultures, histories, and complexities of their countries that are still subsumed in the arts by a pancontinental “African” identity. In early 2017, Armitage is organizing a retreat, inviting 100 artists from across Africa to convene and address current issues evolving in their countries. “I don’t imagine paintings to change laws or culture overnight, but I think there’s a quiet space for contemplation in the presence of a work that is intimate and unique,” he notes. “Spending time in this way with a subject can create a deep empathy that for me is at the heart of what I make, which is that we are all fundamentally the same.”
Charlotte Jansen
“Imitation of Life: Melodrama and Race in the 21st Century” is on view at HOME, Manchester, Apr. 30–Jul. 3, 2016.
Related Stories