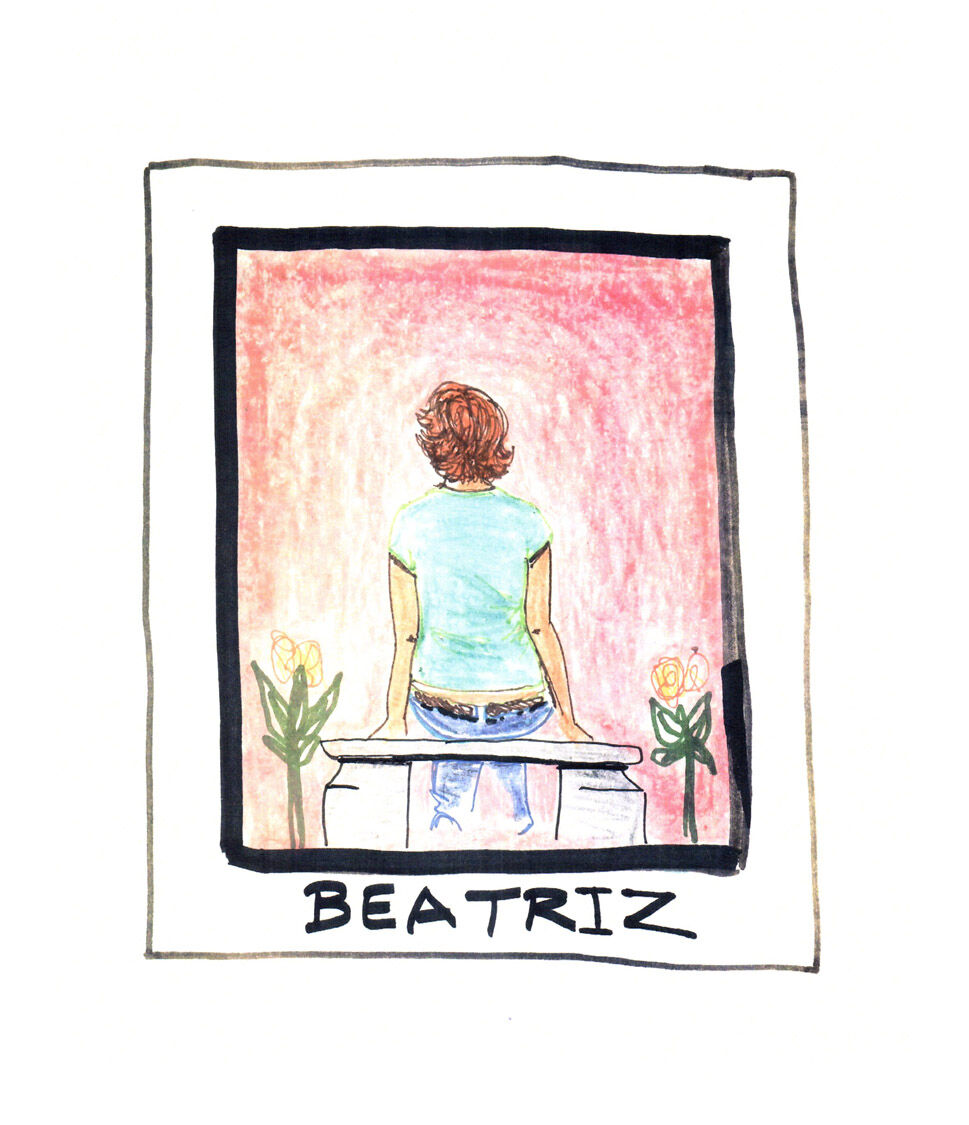 Jesús Bubu Negrón, The Back Portrait. Performed at Concha acústica de Bello Monte and at Plaza Altamira in Caracas, Venezuela. July 2012. Courtesy of the artist and Henrique Faria, New York. 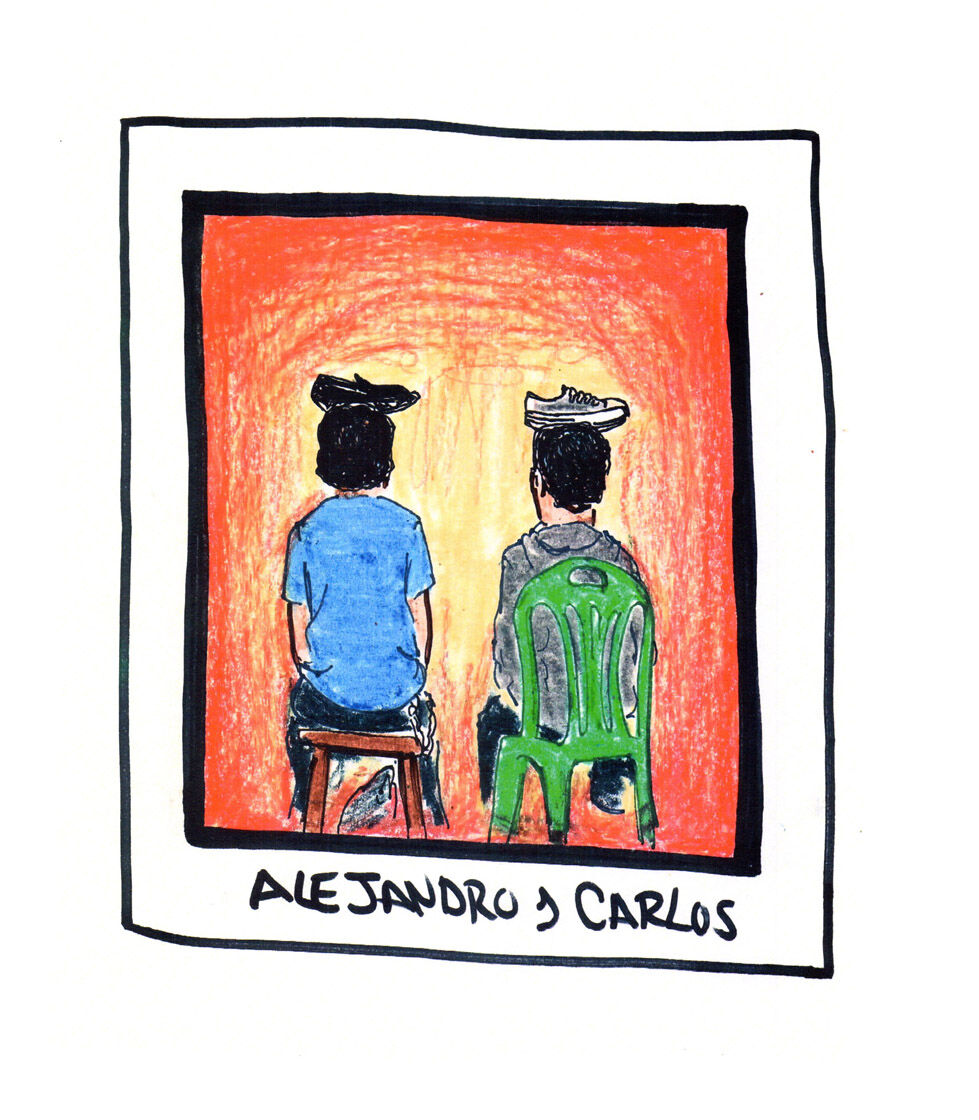 Anyone who has ever sat for a portrait—whether it was with a boardwalk caricature artist or a hyper-realist painter—knows that it’s hard not to be critical of the finished product. Maybe your eyes aren’t quite right, or your chin is bigger than you remember it from the mirror.
San Juan, Puerto Rico-based artist
Jesús “Bubu” Negrón
recognizes the tension and vulnerability that portraiture can provoke. And this week, on Manhattan’s High Line, he’s foregoing it by sketching people’s backs, rather than their faces.
“We all know our face so well—all its little details. So when someone tries to capture it, we’re inevitably critical,” says Negrón. “But when you don’t see your face, you concentrate more on your personality.” 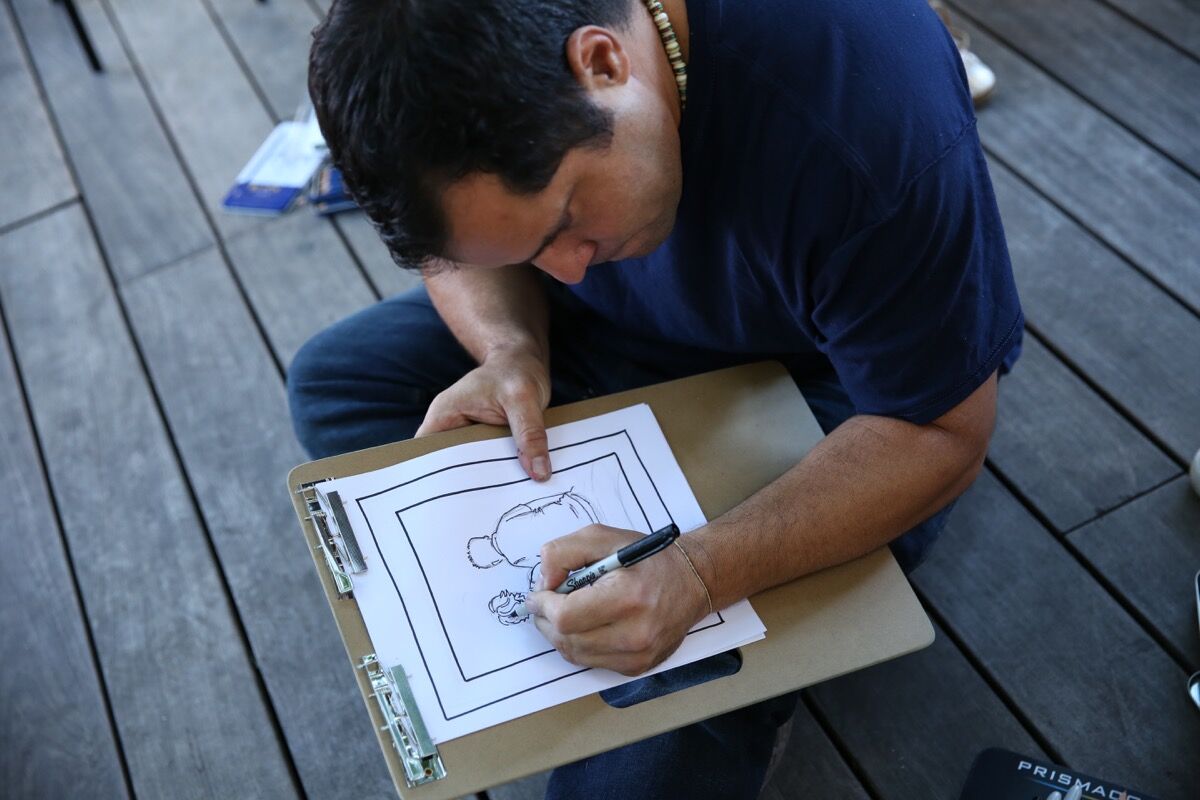 I meet Negrón sitting on a sun-dappled bench on the High Line, where he’ll spend the afternoon sketching the backs of curious passersby, free of charge. He’s casual, in a t-shirt, jeans, and black Converses, surrounded by packs of Crayola crayons and markers.
The artist’s naturally laidback demeanor is in sync with the elevated park’s breezy, buoyant atmosphere—everyone seems to be lounging, exploring, or at play. It also reflects Negrón’s core ambition for “The Back Portrait” series: to connect with people outside of the art world, make them feel comfortable, and give them access to creativity. 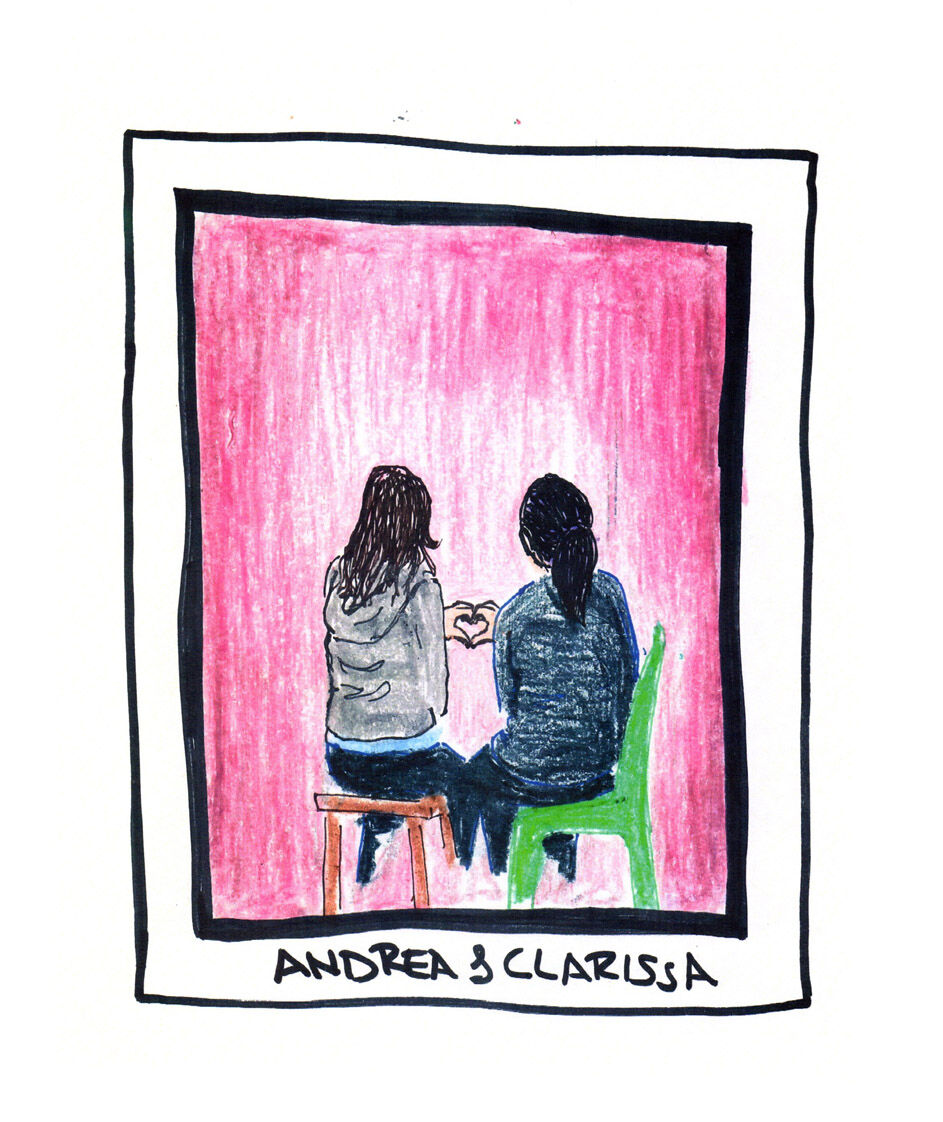 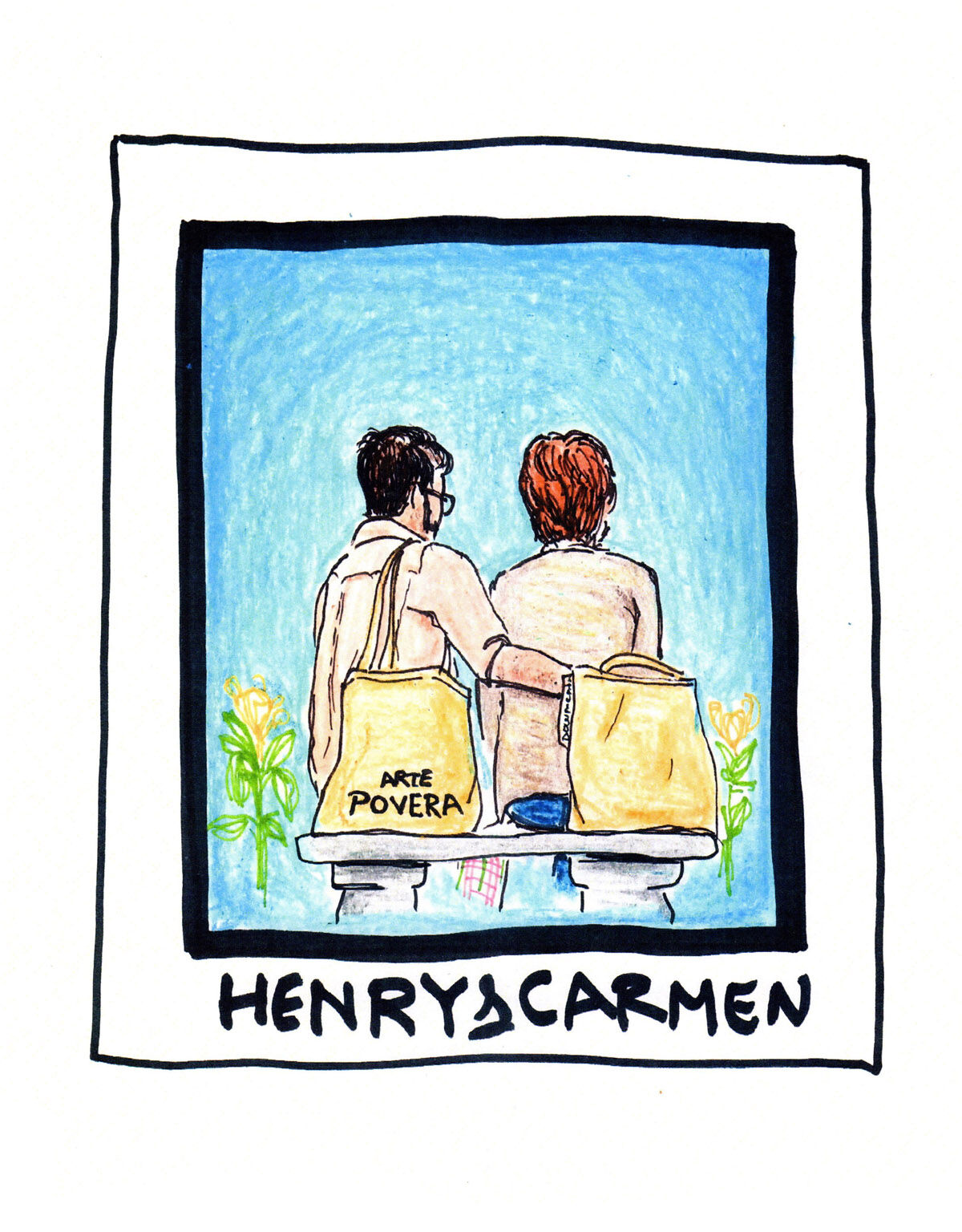 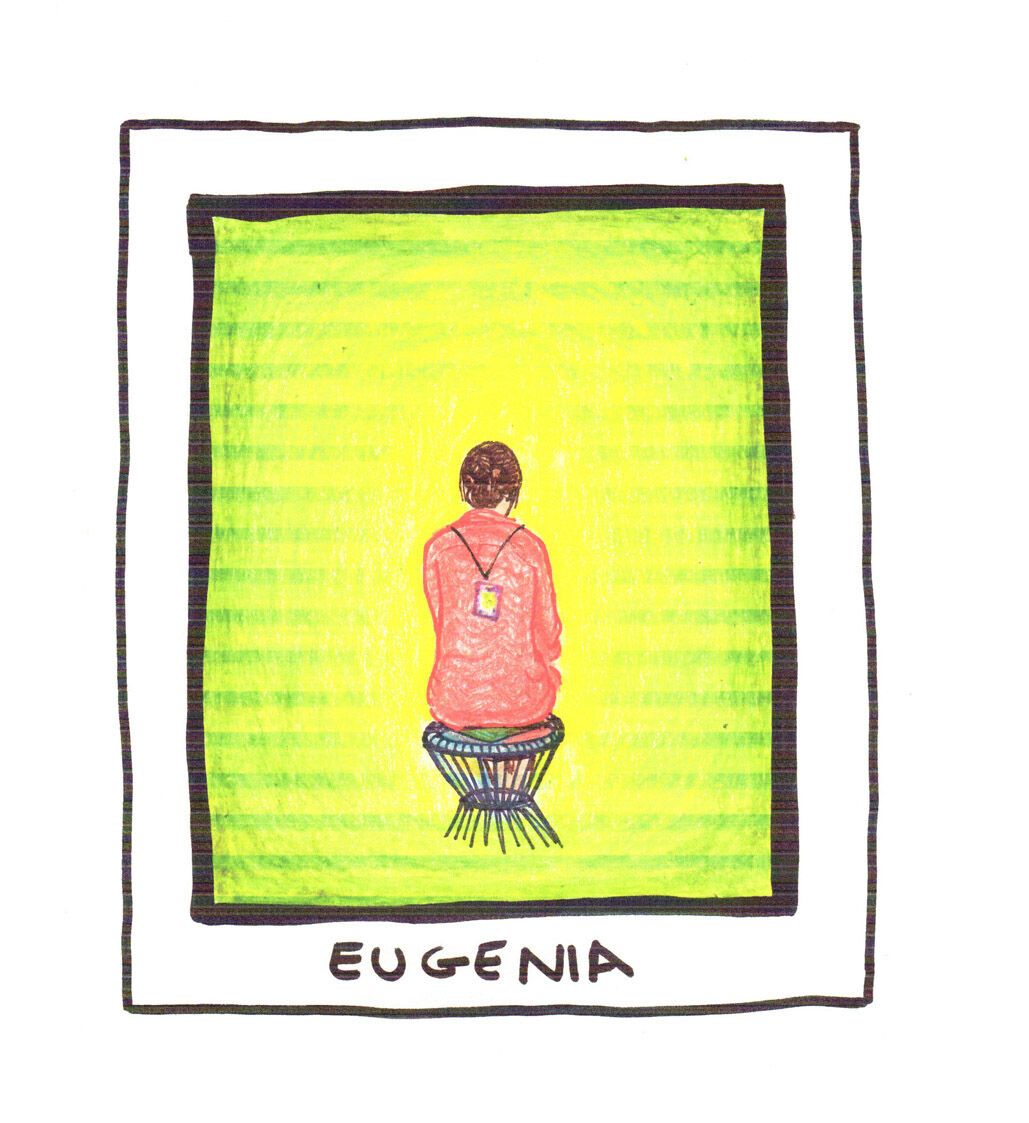 Advertisement
Negrón began making portraits of people’s backs around 17 years ago. At the time, his friend’s three-year-old son had expressed an interest in art, a curiosity Negrón happily encouraged. “I thought, you’re young, let’s do something easy: Let’s start with portraits,” he remembers of his exchange with the toddler. So the duo headed to San Juan’s annual post-Christmas street festival, the Fiesta de la Calle San Sebastián, to set up a spontaneous portrait studio.
Upon arrival, they quickly realized they weren’t alone—many other portrait artists dotted the festival. So Negrón consulted with his young compatriot: How could they offer something different? They decided to sketch subjects’ backs, and asked a buck a piece for their unorthodox drawings.
To Negrón’s surprise, the response was effusive. People lined up to take part, and Negrón’s artist-peers encouraged him to keep at it. The D.I.Y. portrait pop-up also connected Negrón with a community outside of his creative circle; he was excited that he might be introducing at least some of them to art. 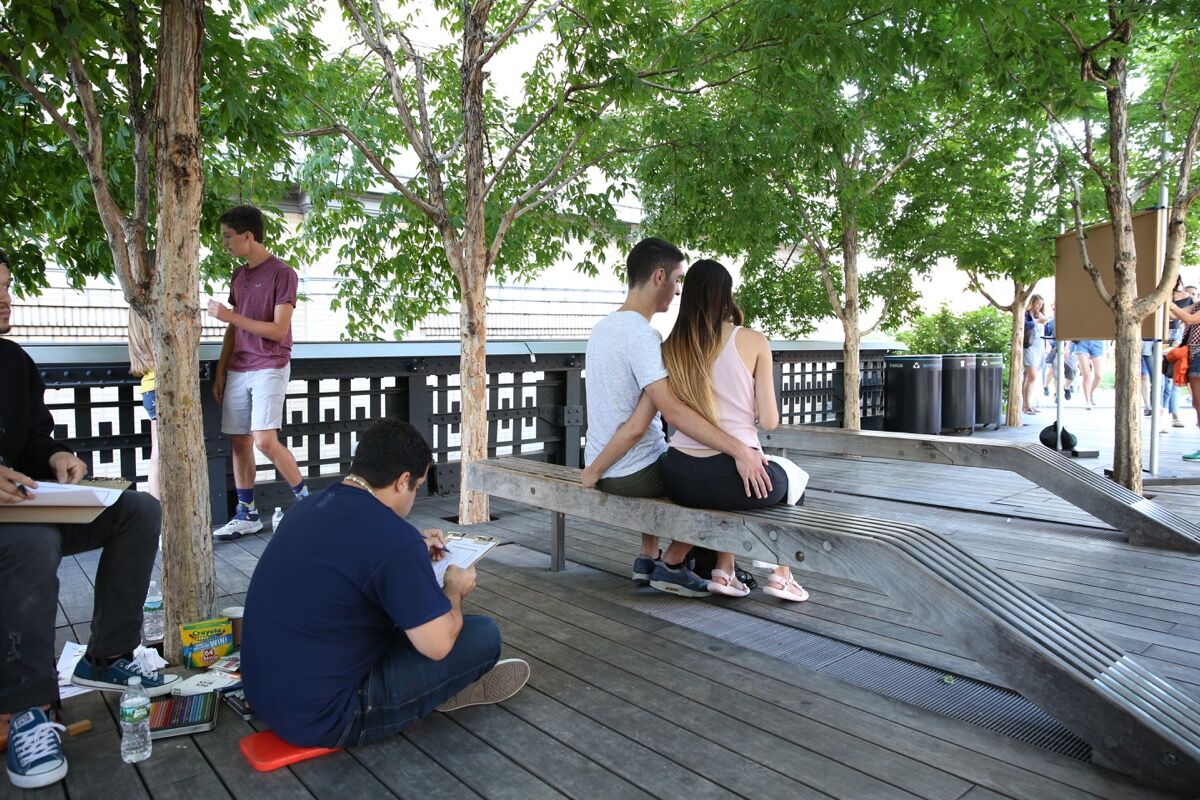 This egalitarian spirit is common to Negrón’s work. The artist has long used commonplace objects and environments to disrupt what he sees as the rigid lines drawn between artisans and artists, and between everyday life and the structures that buttress “high art.” When he was invited to participate in the 2006 Whitney Biennial, Negrón asked two street vendors who’d sold their wares outside the museum for years to move inside the institution. During the run of the show, a hot dog cart and a purveyor of African ethnographic objects both operated from the museum’s lobby.
For the 2007 Sharjah Biennial, Negrón crafted an ornately patterned rug from the papers of discarded cigarettes, collected by street cleaners. He then placed the rug in the market where the butts were gathered.
Negrón’s “The Back Portrait” also subverts art-world tradition other ways. Beyond the simple device of turning his subjects around—which Negrón acknowledges has been done by many other artists, including photographers like
Harry Callahan
and
Susan Paulsen
—he brings the artmaking process out of the studio and into the community.
Most compellingly, however, he inverts the traditional valuation of art. For the High Line iteration of the “The Back Portrait,” Negrón is offering the sketches for free. For other instances of the project, he’s used a sliding scale according to the subject’s means. He’s never charged more than $20. 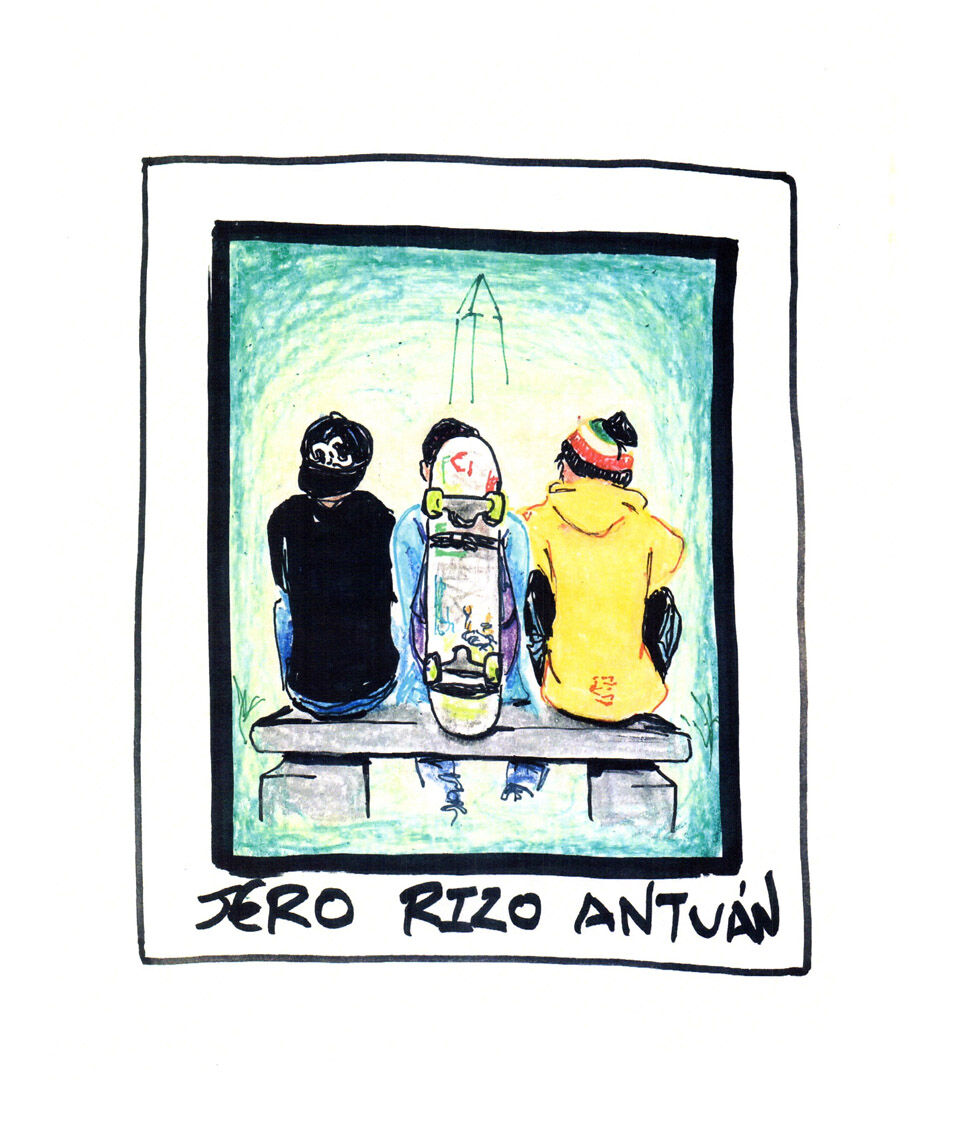 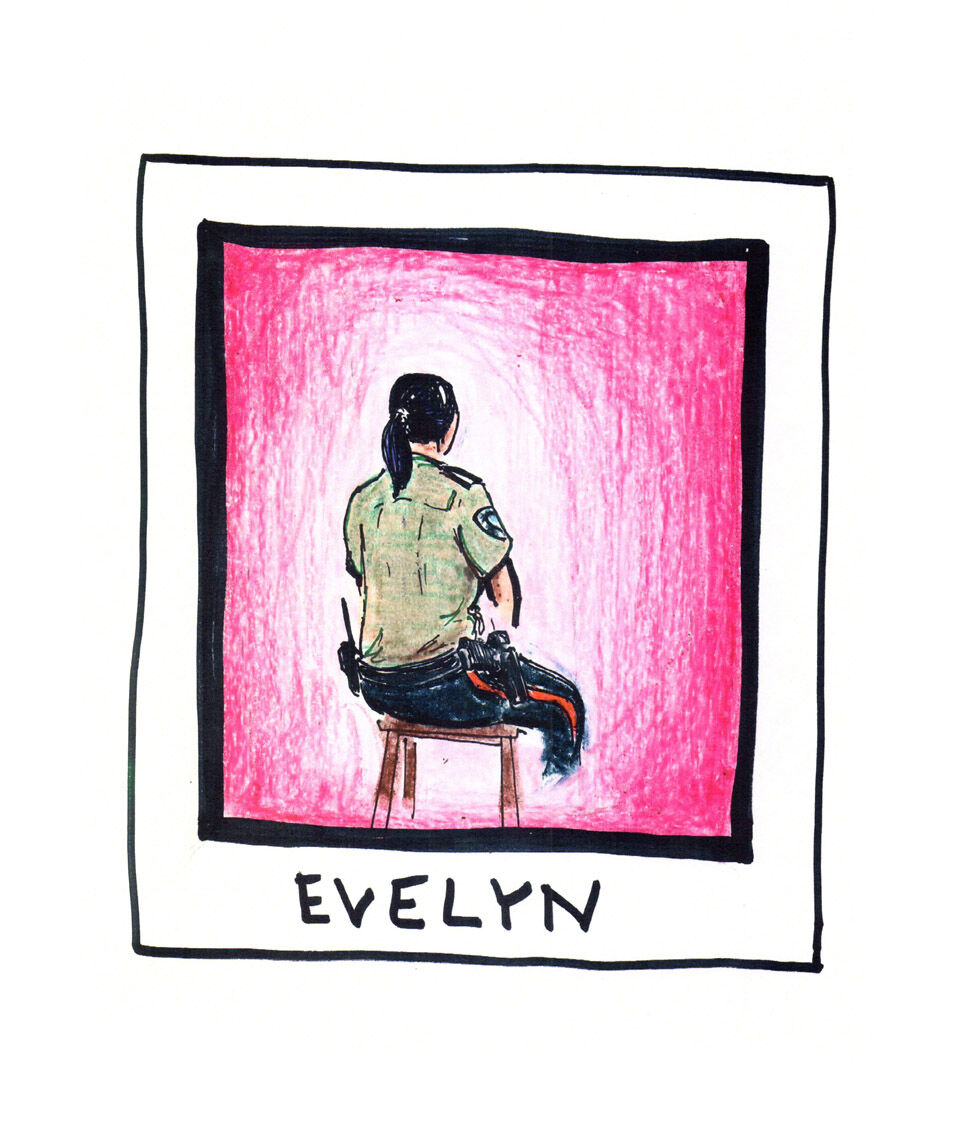 After the portrait is sketched, he photocopies it. (The High Line staff places a photocopier en plein air each day during the week’s sessions.) Negrón gives the original drawing to the subject, retaining the copy for his archive.
Occasionally, he’ll bring together some of the thousands of back-portrait photocopies he’s kept over the last 17 years, mimeographing them once to more to create an installation—copies of copies—which might be hung in a gallery or art fair booth. Counterintuitively, they’re priced higher than the originals. And if collectors buy them—which they have—“then the whole system that we’re familiar with is turned around,” Negrón says, clearly pleased at the prospect.
As Negrón’s newest subjects line up under the grove of trees that hang above a section of the High Line near 16th Street, the artist settles onto the ground cross-legged, prepares his pens and crayons, and gives instructions to the four New York-based art students who are assisting him with the project. 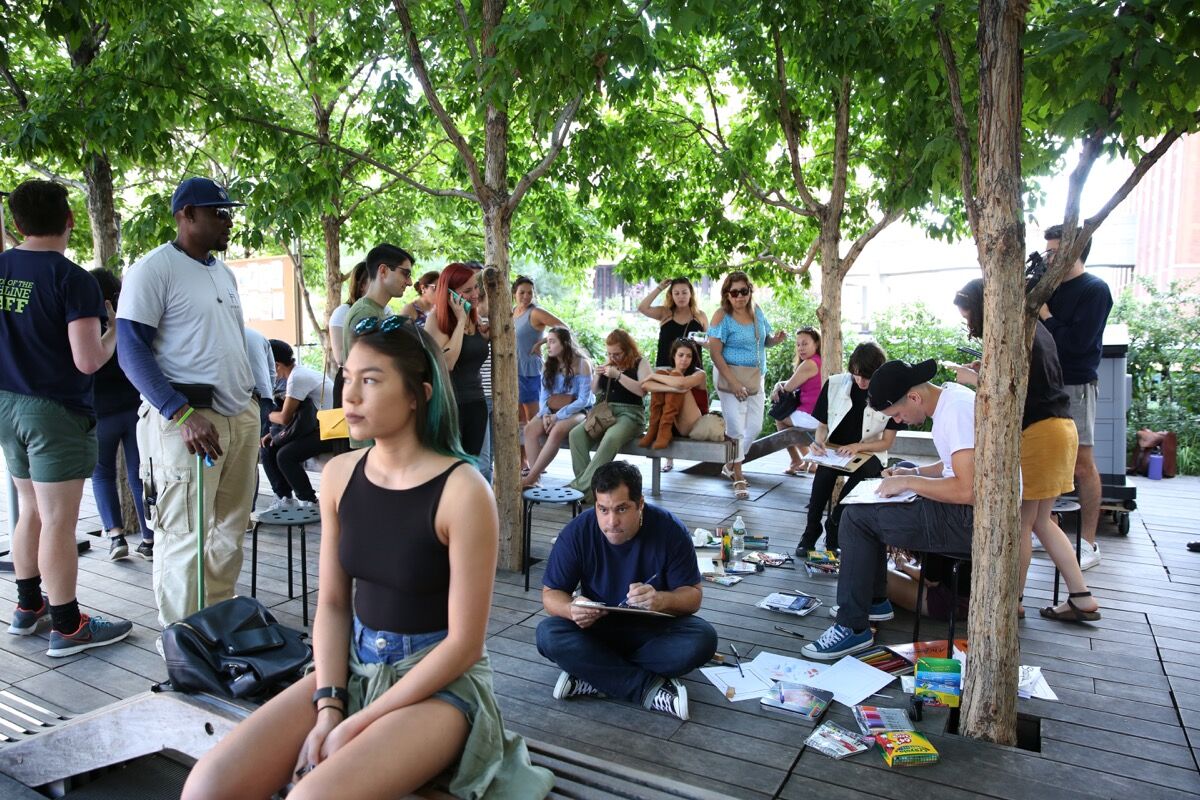 This is the first time Negrón has had help for the back portraits, and he’s enjoying the collaborative process so far. The students help him color in the outlines of each portrait. But more vitally, they also remind him of the original inspiration for the project, when Negrón taught a three-year-old to make art—and encouraged himself to connect with a world outside his own.
“I’m so happy about doing it here, at the High Line,” he says. “It returns the project to its roots.” (Other venues for the performance have included a 19th-century bandshell in Caracas, Venezuela, and the Art Miami fair.)
Under the canopy, a young woman and her newborn sit down on a bench for their portrait. Negrón hands the baby a package of markers to keep him busy. A family of French tourists line up next, followed by a park ranger. (I can’t resist signing up for a sitting, too.) “It’s important to me to make contact with people outside of the art world,” Negrón muses. “I need that. I don’t like being closed in.”
Alexxa Gotthardt
Related Stories