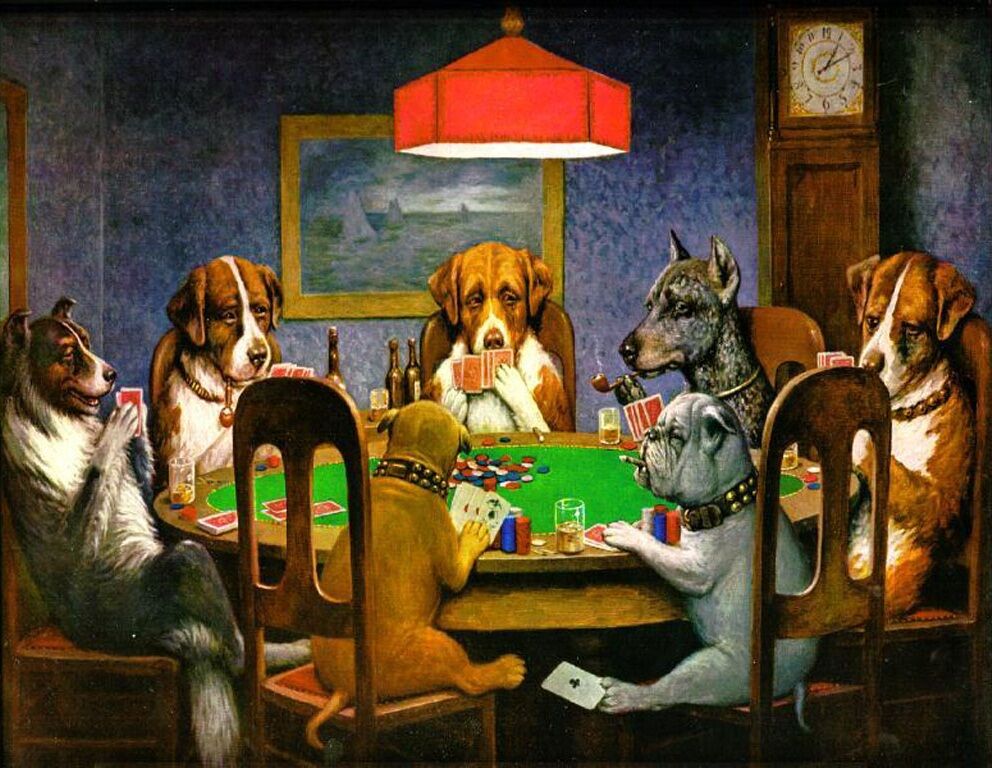 On April 1, 2002, William Hennessey, the director of the Chrysler Museum of Art in Virginia, released a press release claiming he was trying to acquire the series of oil-on-canvas paintings universally known as “Dogs Playing Poker” (1903-1910). The press release turned out to be a prank—apparently, the idea of hanging such things in a museum was an art historian’s idea of a hilarious joke.
Still, Hennessey admitted that he’d always genuinely liked the series. And he isn’t alone. The “Dogs Playing Poker” paintings, by Cassius Marcellus Coolidge, belong to that pantheon of artworks—
Michelangelo
’s David,
Da Vinci
’s Mona Lisa,
Botticelli
’s The Birth of Venus,
Van Gogh
’s Starry Night,
Hopper
’s Nighthawks— that are immediately recognizable to people of all ages and backgrounds, including those who don’t readily admit to enjoying art.
It is also, at least by common consensus, pretty far from great. Unlike the Mona Lisa, a masterpiece that’s been kitschified into t-shirts and memes and magnets, Coolidge’s canine paintings were kitsch to begin with, a funny sight-gag, nothing more or less than it appeared to be. In an episode of the ‘80s sitcom Cheers, Sam the (lowbrow) bartender gushes that he notices something new every time he looks at one of the paintings; the line gets a knowing chuckle from the live studio audience. Coolidge’s series seems like the very definition of a guilty pleasure, the artistic equivalent of a Big Mac and fries. 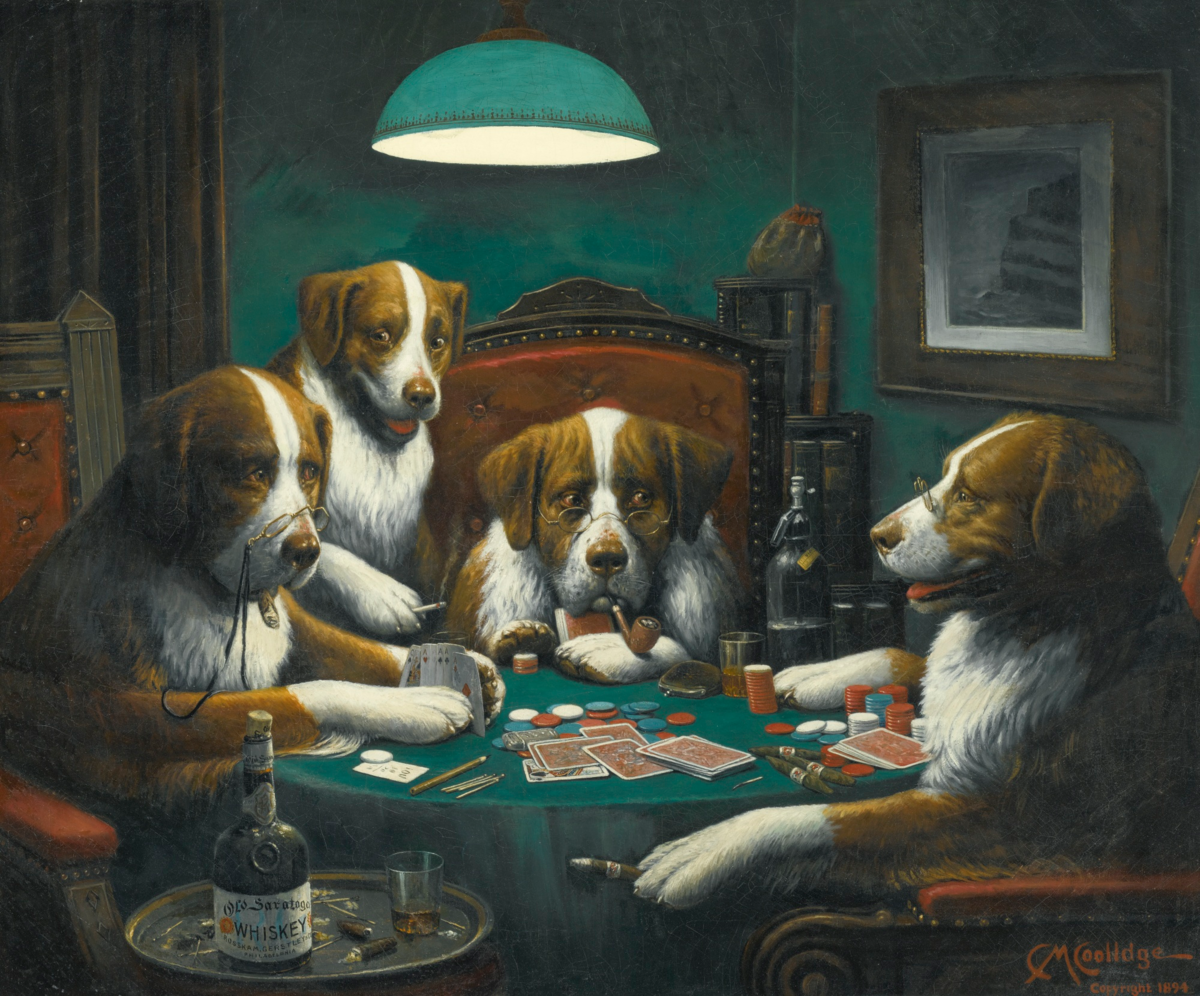 So how, pray tell, did a pack of dogs playing poker outlast so many other “serious” paintings?
Coolidge, who created at least eight variations on the dog/poker theme, including A Friend in Need (1903), the most frequently reproduced of the bunch, wasn’t the first to paint anthropomorphized animals—they’ve always been easy fodder for comedy. But it was his good luck to become a commercial artist at a time when American businesses were beginning to invest heavily in advertising. In 1869, the year Coolidge turned 25, the first modern ad agency, N.W. Ayer & Son, opened its doors; between 1880 and 1920, total advertising expenditures by American companies surged from 200 million dollars to 3 billion. At the heart of this revolution were artists, whose images had to be cute, weird, or otherwise memorable enough to turn consumers’ heads.
In his twenties and thirties, Coolidge dabbled in a series of jobs that may have prepared him for success as a commercial artist. Raised in the small town of Philadelphia in upstate New York, he moved in 1873 to Rochester, where he tried his hand as a druggist, a street address painter, and a cartoonist. At one point, he penned a comic opera about mosquitos. Though he lacked any formal training as an artist, Coolidge seems to have had an intuitive grasp of what made people laugh and what kinds of images they wanted to see. Many art historians credit him with inventing “comic foregrounds,” those plywood pictures with a cut-out hole for a head, allowing passersby to pretend they’re bodybuilders or mermaids. Even if he’d never painted a single pooch, Coolidge’s place in the kitsch canon would be secure. 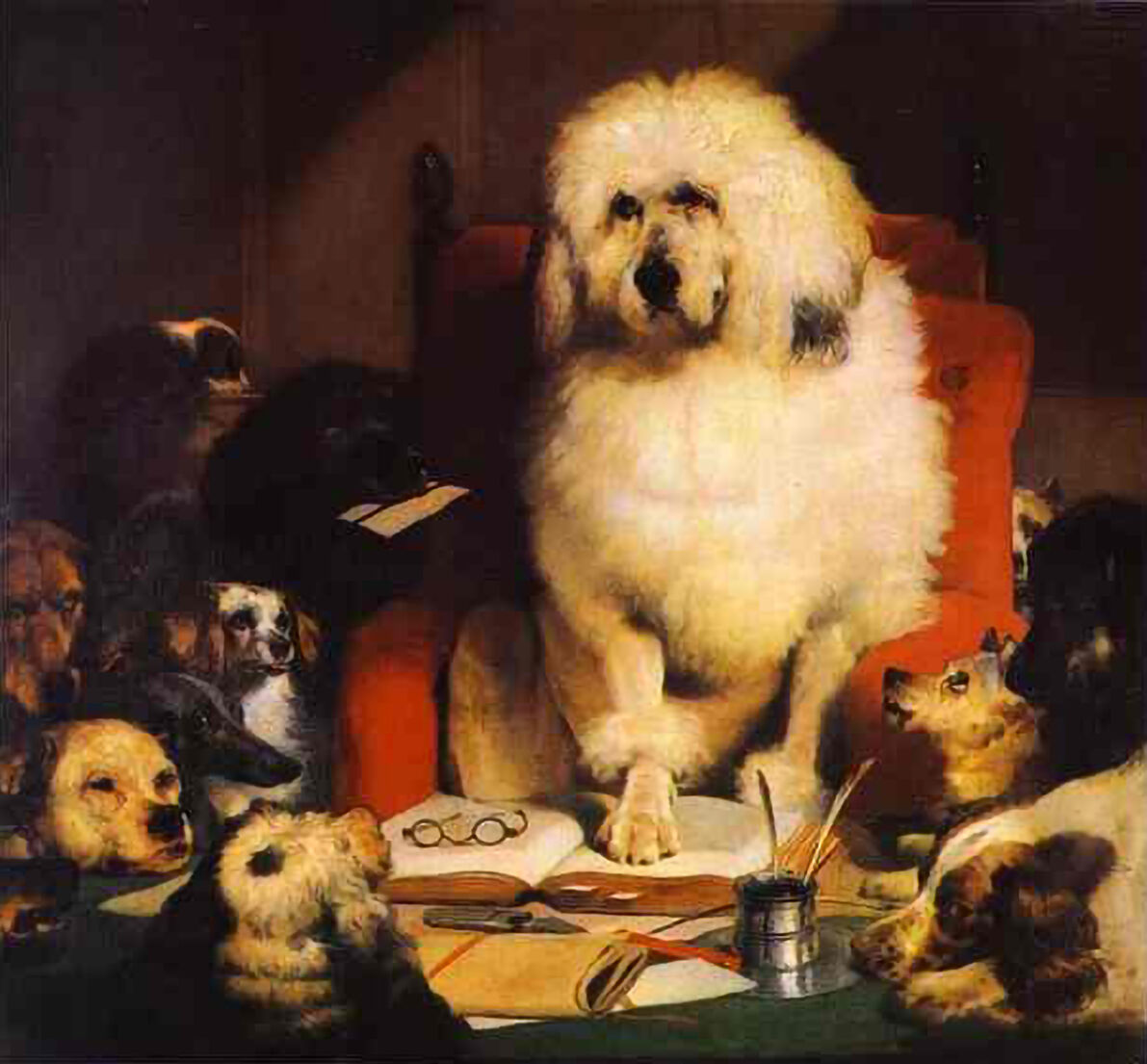 Advertisement
His knack for crafting playfully surreal images culminated in his magnum opus, the absurdist canine series for which he’s best remembered today. His earliest paintings of dogs playing poker, dating back to the 1870s, decorated cigar boxes and served as a way for tobacco companies to distinguish themselves from their near-identical competitors. But it wasn’t until 1903, when Coolidge signed a contract with the Minnesota-based promotional firm Brown & Bigelow, that his success was assured. Coolidge went on to create a total of sixteen dog paintings, including A Friend in Need, for the company, and the images were endlessly reproduced in calendars advertising cigars. These calendars proved to be massively successful, and Coolidge’s art found its way into millions of homes.
What was it about the “Dogs Playing Poker” series that people liked, and continue to like, so much? Coolidge’s images are undeniably adorable, and they don’t take themselves too seriously. Perhaps most importantly, they’re weird without being alienating—something that can be said about many masterpieces of commercial art, from Mr. Clean to Dos Equis’s Most Interesting Man in the World.
With this in mind, it’s instructive to compare A Friend in Need with Laying Down the Law, an 1840 painting by the English artist
Sir Edwin Landseer
that’s sometimes cited as a precursor to Coolidge’s series. On the surface, the two works are almost identical: Both feature dogs gathered in a solemn circle, acting like people (card-players in Coolidge, lawyers in Landseer). But Landseer’s painting is meaner and more blatantly satirical than A Friend in Need; rumor has it Landseer modeled some of the dogs off of real-life acquaintances, including the English Lord Chancellor.
Coolidge’s painting has a far gentler sense of humor. It was designed, after all, to appeal to as many calendar-buyers as possible. Where Landseer animalizes humans, Coolidge humanizes animals. In doing so, he hit upon a reliable kitsch formula that’s worked for everyone from Walt Disney to
William Wegman
to the creator of the “Keyboard Cat” YouTube video. 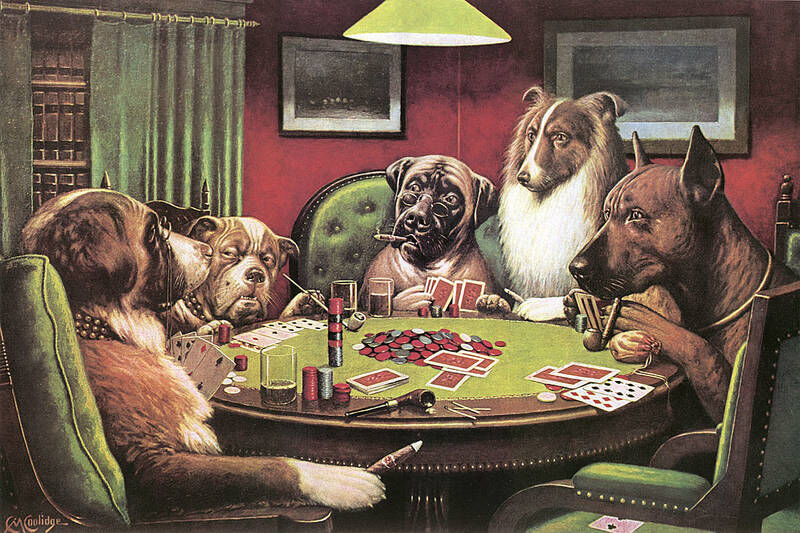 Coolidge painted dogs ballroom dancing and playing football and baseball, but it was the one-two punch of canines and poker that’s proven most enduring. This makes sense: Card games, with their inherent tension between what’s seen and what’s unseen, often make for entertaining paintings. In Caravaggio’s The Cardsharps (c. 1595), for instance, a young sucker studies his hand while an experienced con artist signals to his accomplice, who seems to have a few bogus cards sticking out of his back pocket. The sucker doesn’t know he’s being duped, but we do. A similar kind of dramatic irony undergirds Coolidge’s A Bold Bluff (1903), in which a Saint Bernard bets big on a pair of deuces, leaving his opponents to decide whether or not he’s fronting. (In part two of the diptych, Waterloo, completed the same year, the other dogs growl and snarl at the Saint Bernard’s hand—it looks like they picked the wrong time to fold.)
Paintings of card players have long dealt with themes of lies and deceit, and the most famous iteration of Coolidge’s poker-playing dogs series is no exception. Study A Friend in Need closely, and you’ll realize where its title comes from: Unbeknownst to the other players, the bulldog in the foreground is slipping an ace to his partner. The dirty ace hangs mere inches away from the second bulldog’s paw, echoing the outstretched hands in The Creation of Adam (c. 1511) and, just as in Michelangelo’s famous fresco, heightening the suspense.
When Coolidge died in 1934, the obituary in the local paper read, “He painted many pictures of dogs.” And how. Coolidge himself remains all but unknown today, a noble, neglected pioneer in the proud 20th-century tradition of animal art. Meanwhile, his paintings of dogs playing poker routinely go for five or six figures; just a few years ago, one of the earliest installations in the series sold for $658,000 at Sotheby’s. The auction catalogue excerpted a 1973 article from American Heritage: “Coolidge’s poker-faced style is still engaging today … His details of expression, clothing, and furniture are precise. Uncannily, the earnest animals resemble people we all know.” In other words, Sam from Cheers may have been right after all.
Jackson Arn
Related Stories