How Painting Helped this Prisoner Persevere through a Wrongful Conviction 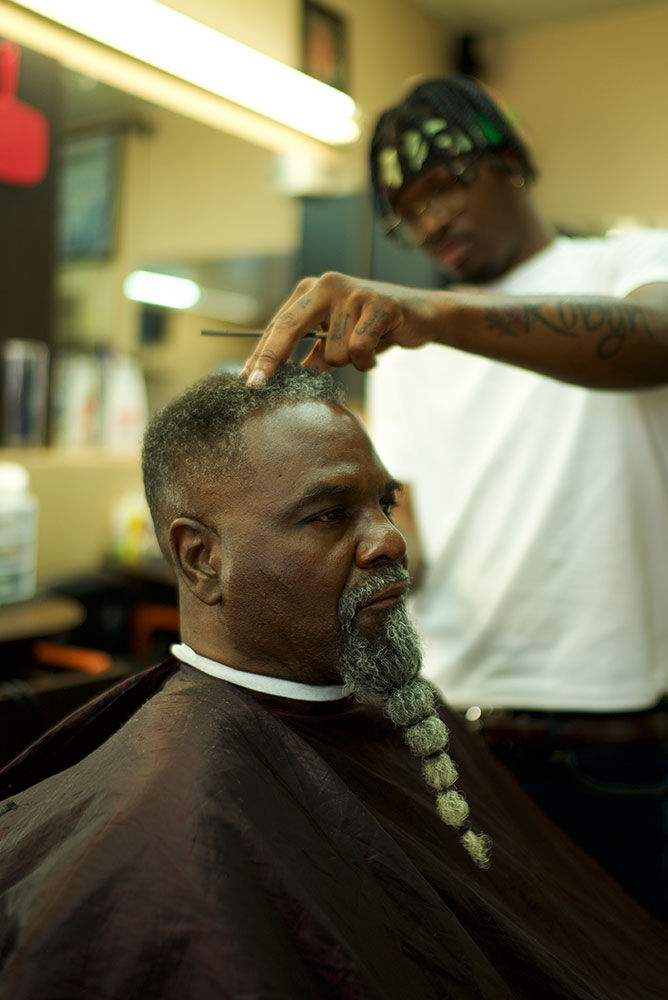 Still from the documentary Mr. Wash, 2018. Photo by Sean Mattison. Courtesy of WeTransfer.

When Fulton Leroy Washington, also known as Mr. Wash, began serving a life sentence in prison in the late 1990s for a crime he did not commit, he started drawing. Doodles and sketches led to striking figurative paintings. Art helped him get through 21 years behind bars—in California, Colorado, Missouri, and Kansas—and eventually, to clemency.
Washington’s story is the subject of an affecting new documentary short, Mr. Wash, which can now be viewed online. Co-directed by writer Marisa Aveling and filmmaker Sean Mattison, and supported by WeTransfer, the film touches upon larger issues of mass incarceration and prison reform, while honing in on Washington’s personal experience—and, in Mattison’s words, “creative expression and its redemptive power.”
The camera follows Washington in his native city of Compton, California, as he cannily reflects with family and friends on his art and his time in prison. He began serving time in 1997 after being wrongfully convicted of three nonviolent drug offenses (allegations against him claimed that he had purchased chemicals for making PCP). Mandatory minimum sentencing laws led a judge to deliver a life sentence, due to three prior nonviolent convictions.

“Sadly, Wash’s circumstances aren’t that extraordinary, but what makes him really special is his artistic talent,” said Aveling, who first met Washington while writing a February 2017 article on the individuals whom President Obama had granted clemency. “I don’t know whether Wash would say that art help to liberate him,” she continued, “but in a way, it kind of did. It helped him escape the physical confines of prison, and also, what his art did for his fellow inmates is pretty significant.”
Washington’s fellow inmates were the first to notice his artistic talent: He’d draw on postcards and envelopes that they’d send to their families. His first attorney, Karen Smith, also noticed, and asked him to draw from memory a witness who could corroborate his innocence. The resulting sketch was so accurate, his legal team was able to find the person, who was brought to trial in 1997.
While it didn’t ultimately help his case, the experience was enlightening. “From that day on, I continued to draw little sketches and tried to share my art, and teach other people to do it, as well,” Washington recently told Artsy. Through prayer, he explained, he’d surmised that this was God’s plan—that he should pursue art, teach it, and share it with inmates and their families. Washington was also convinced that it was art that would get him out of prison. 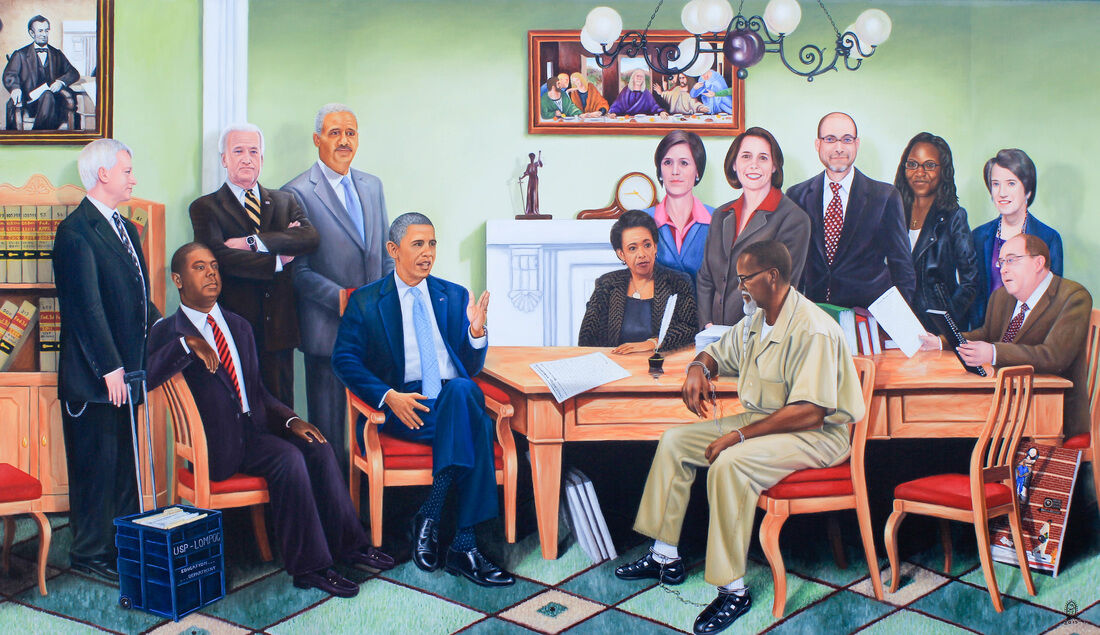 Without any prior lessons or training (he was a welder and worked in construction before being incarcerated), Washington signed up to work in the prison’s hobby room, so he could try painting. “They’d give you space outside of your cell where you could get away from everybody and just sit there and paint, make ceramics, get some yarn and knit—they have a room full of guys knitting hats and scarves and gloves,” he recalled. He ordered paints and brushes from a catalog of pre-approved supplies, and worked from instructional painting videos.
Other inmates watched as Washington became more and more deft with a brush. He took to creating slick portraits of his peers, including scenes inspired by the paths that led them to prison. He accepted commissions, painting from photographs or based on verbal descriptions. “I pride myself on the ability to take whatever’s in your imagination and turn that into reality in a painting,” he said.
Washington would also paint complex narrative pieces based on news and current events, as well as developments in his own case: Every time he was on trial, he’d make a painting to illustrate it. And as his own talent flourished, he also taught fellow inmates to paint. 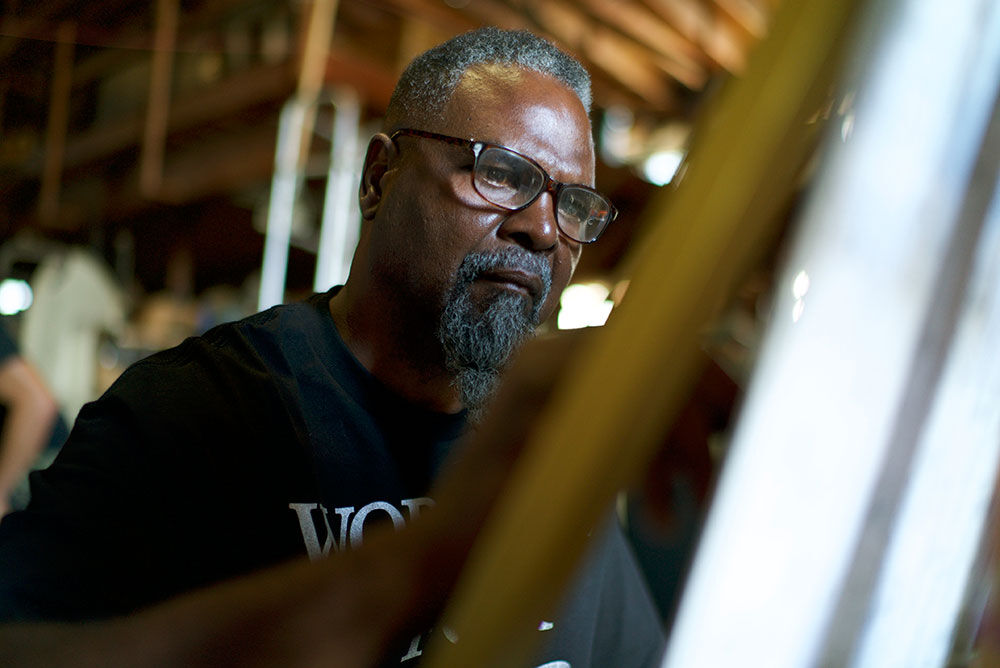 Still from the documentary Mr. Wash. Photo by Sean Mattison. Courtesy of WeTransfer.

Advertisement
Given the limiting size of the hobby room, Washington had to convince prison staff to dedicate another space to painting classes. He learned as much as he could from videos—how to mix colors; how to render landscapes, water, animals—then shared the techniques and exercises with others. His job assignment was to keep the room clean. Washington spent most his time there, managing to paint up to five or six hours per day.
The nascent artist became prolific, creating between 50 and 75 works every year on average; he says he stopped counting after 900. In 2014, he made perhaps his most consequential painting, titled Emancipation Proclamation. Modeled after the 1864
Francis Bicknell Carpenter
painting entitled First Reading of the Emancipation Proclamation by President Lincoln, Washington painted a scene in which President Obama was granting him clemency. Where Lincoln was in the original, he had placed Obama; where there had once been generals, he inserted government officials like then-vice president Joe Biden and attorneys general Eric Holder and Loretta Lynch. Washington also integrated his own lawyers and family members into the composition. The vision, he said, came to him through prayer. “I just saw it as a way of telling the story about my effort and what I was going through trying to get out of prison,” he explained. 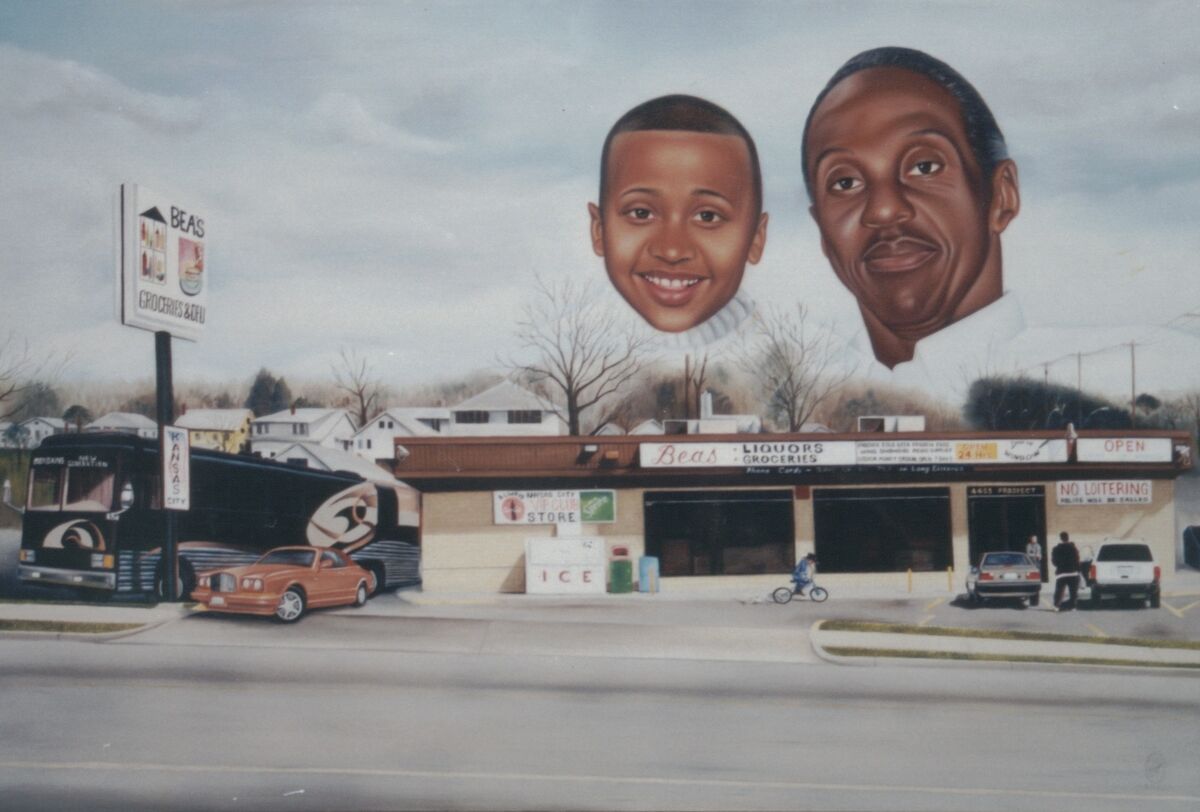 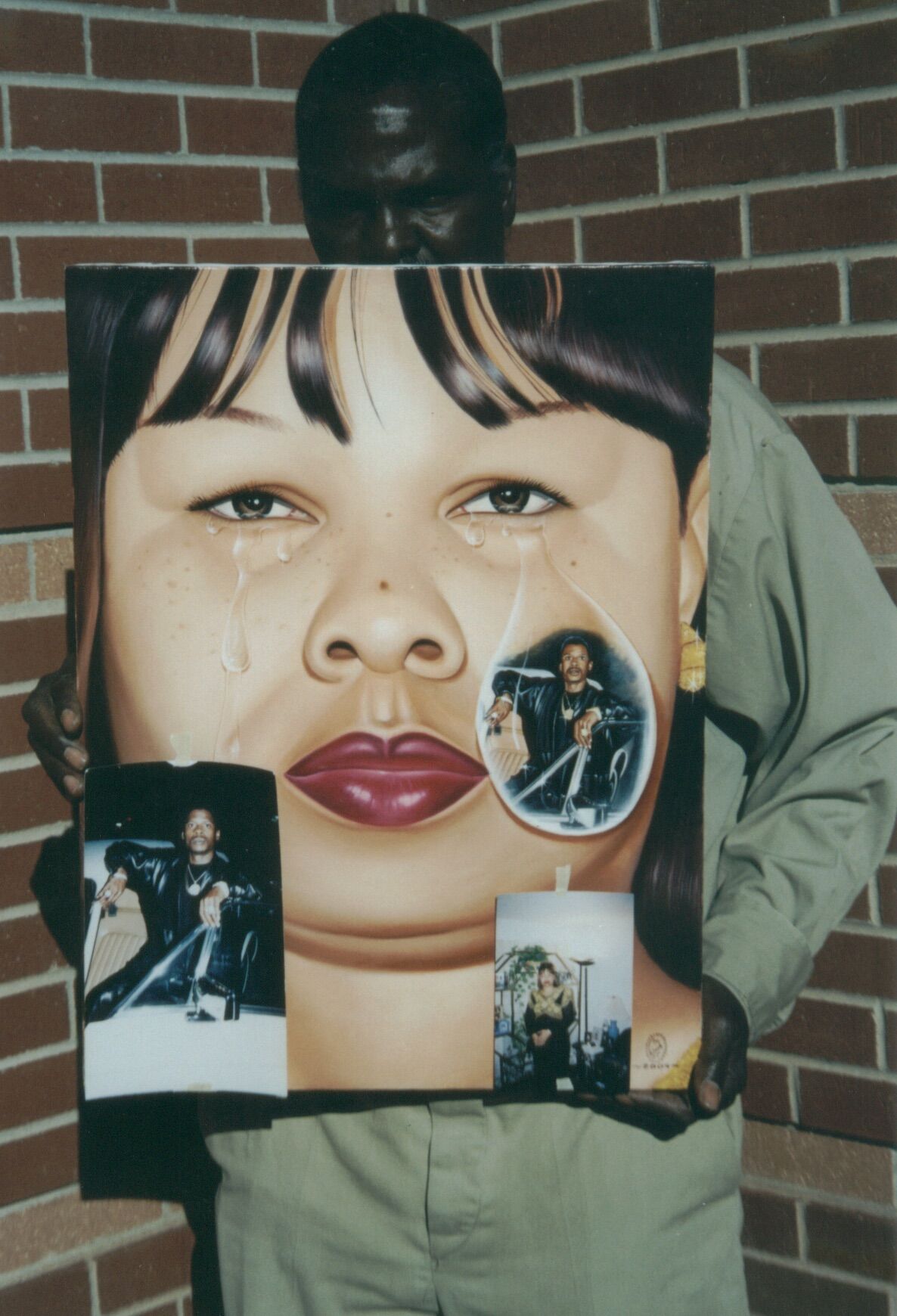 But it was also prescient. He’d created Emancipation Proclamation after applying for clemency. When the piece was finished, his legal team sent a photograph of the painting to White House counsel Neil Eggleston. Later, Washington learned that President Obama would be commuting his sentence in May 2016. That June, he moved out of prison and into a halfway house.
When documentarians Aveling and Mattison caught up with Washington to begin filming, he was staging his first solo show in Los Angeles and celebrating the occasion with family. But, Mattison noted, the artist is still feeling the injustices of his wrongful conviction; Washington is in the midst of trying to officially prove his innocence, and is angling for a settlement, as well. He’s also still required to report to a probation officer. “When people get their sentences commuted, they can’t just go back to life as usual,” Mattison said.
These days, Washington has to juggle the daily grind of paying rent and insurance, buying groceries, doing laundry, and changing car tires. He looks forward to having the time and headspace again to paint regularly. 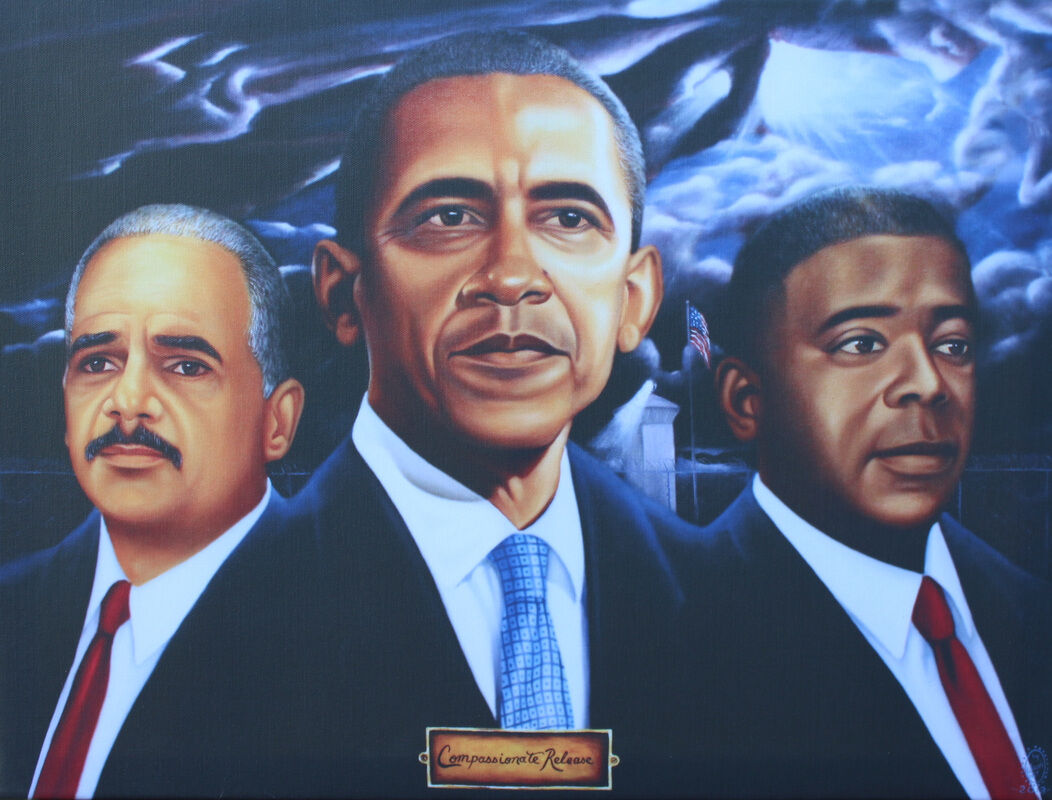 “It’s strange—in prison, you had none of these obstructions. You just get up, go to your job assignment, clean that area, sit down, paint,” he said. “Whereas now, I don’t have the freedom of mind to get up in the morning and just start painting. I’m still trying to adjust to that.”
“I feel that God has blessed me; that he has delivered on his word; that through faith, patience, and hard work, you’ll inherit what you deserve—I believe in that,” Washington reflected. “A lot of times I wanted to stop. I wanted to do what everyone else was doing [in prison]—like watching TV or getting into a bodybuilding program. But I had to help inmates and their families, to create a bridge with art, to try to hold those families together.”
Casey Lesser is Artsy’s Lead Editor, Contemporary Art and Creativity.
Related Stories