Painter
Carroll Dunham
is well known for his unflattering depictions of nude women—often faceless, with pronounced sex organs and stringy hair. Since he began painting them in his “Bathers” series in the mid-aughts (posed amid pools, flowers, and secluded natural landscapes), he’s received both significant acclaim and criticism. At a public conversation, his wife, photographer Laurie Simmons, once asked him outright, “What is it with all the female genitalia? Are you a pervert? Are you a feminist? What’s going on?” He didn’t, apparently, have a definitive answer. In 2014, Dunham seemingly renounced the charged subject matter, but began drawing and painting equally grotesque, unflattering male nude wrestlers.
On April 20, Gladstone Gallery mounts 11 of these canvases. Some of the scenes are nocturnes; others feature a large, round sun. In four paintings, a single wrestler lies on the ground, while Mud Men (2017) depicts one man patting another on the back in a kind of peaceful accord. Perhaps the most significant canvas, Any Day (2017), neatly links the body of work to his previous “Bathers,” as it includes a female nude in the background (the only canvas to do so). Any Day is quintessential Dunham, featuring the cartoonish forms, pronounced genitalia, lush setting, and glaring palette that have become the artist’s hallmark. Dunham described the work to Artsy as a kind of “summing up” that offered him a sense of inner resolution. 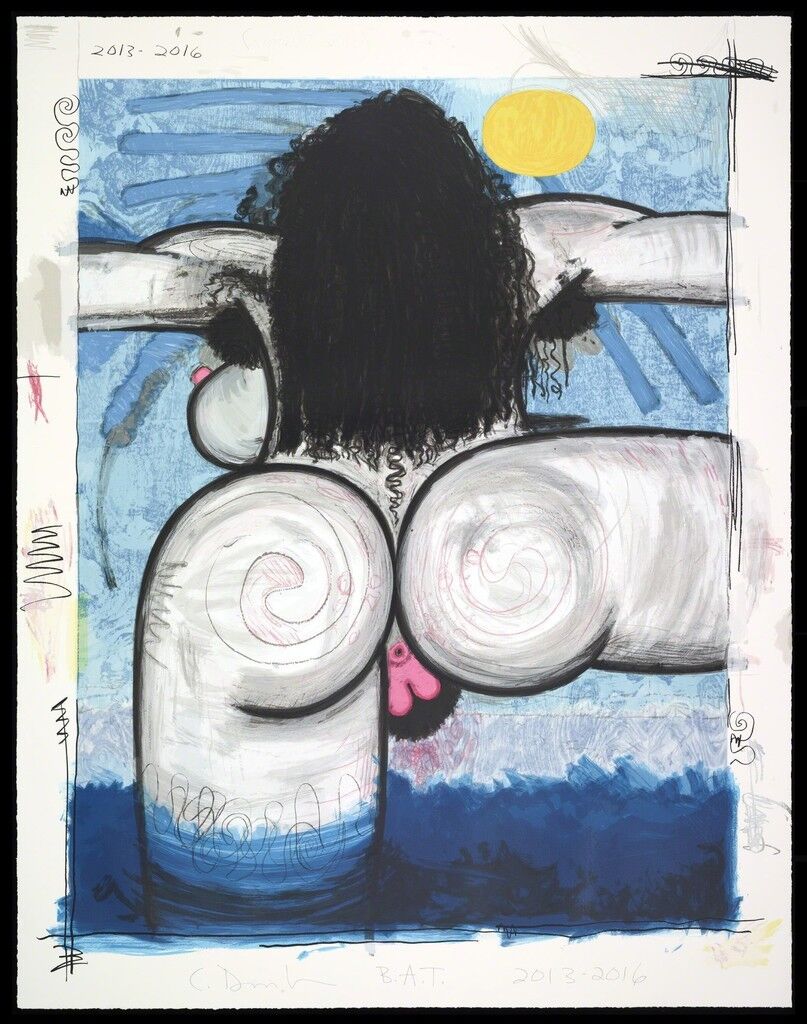 Carroll Dunham
Bather, 2016
Two Palms
“I think a lot in terms of constants and variables,” said Dunham. The birds, humans, and natural elements in his series become shapes to rearrange like puzzle pieces on a canvas. He worked on many of these paintings simultaneously, beginning to see a world develop. Though Dunham denies any conscious desire to evoke his art-historical forebears, his wrestling subject matter sites him within an age-old tradition of artists who (figuratively) tackled fighting figures.
Interestingly, both Dunham and turn-of-the-century
American Realist
Thomas Eakins
progressed through paintings of bathers before turning to wrestlers. Bruce Robertson, the author of “Thomas Eakins’s Wrestlers and the Practice of Art” (2009), tells Artsy that the two subjects granted Eakins “the ability to see the male body unclothed, or virtually unclothed, and to paint it.”
In Swimming (1885), Eakins depicts nude figures around a swimming hole. They’re lying on, standing near, and diving from a craggy mass of rocks. During the next decade, he painted Wrestlers (1899), which features two barely-clothed men sparring in the foreground. In the background, another man trains while two figures (perhaps an athlete and a coach) stand side-by-side, just their lower bodies showing. In shifting from bathers to wrestlers, both Dunham and Eakins demonstrated a growing interest in depictions of touch.
4 Images
View Slideshow 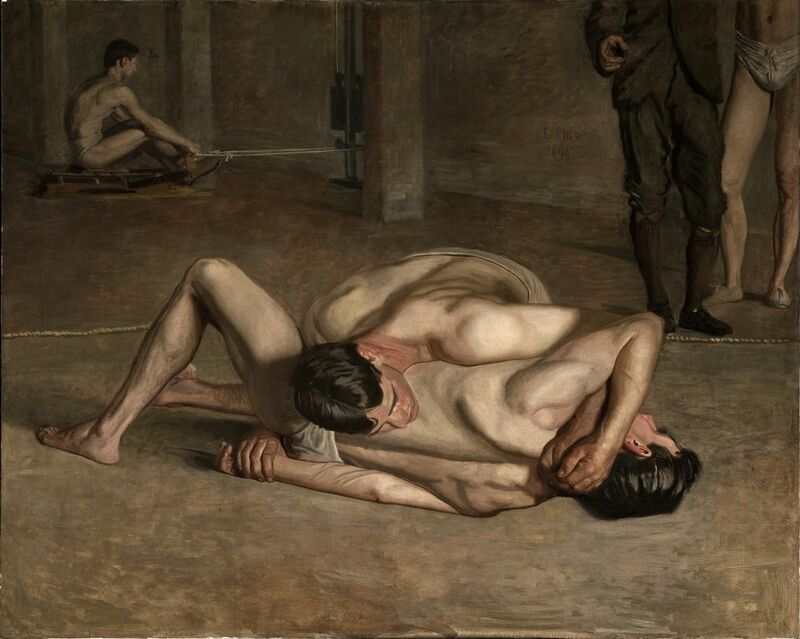 Advertisement
Aside from sex, wrestling (with the possible exception of dancing) may be the only activity that allows two bodies to interlock in such complex and intimate configurations. Representations of the sport convey sensuality while avoiding implications of any loaded relationship between the competing figures. Instead of lust or love, pictures of wrestlers can imply a range of associations, from conflict to mere athleticism.
“Painting is like wrestling. It’s a struggle,” Robertson tells Artsy, and invokes the story of Michelangelo’s attempt to free a sculpture from a block of marble. “Right there, at the core of Western art, there’s this sense of material being recalcitrant. You have to struggle with that material and it takes real effort to make it reveal itself.” Artists have been sculpting wrestlers since antiquity; their potency as a subject has spanned centuries. The best-known example may be The Wrestlers from the 3rd century B.C., which now sits in Florence’s Uffizi Gallery.
If Robertson views the theme of wrestling as symbolic of artists’ conflict with their material, Ilene Fort believes the struggle is more personal and internal. In her view, Eakins’s two wrestlers simply represent opposing halves of his dual nature. In the 2009 article “Eakins’s Wrestlers as Symbolic Self-Portraiture,” she describes the match as “Eakins’s own conflict with the world and himself.” She compares the 1899 painting to a major sculpture that preceded it: George Grey Barnard’s The Struggle of the Two Natures in Man (1888). This work makes inner turmoil both literal and monumental. Following Eakins, male American Realists from
George Luks
to
Reginald Marsh
similarly adopted the subject matter. Fort suggests that the training athlete in the background of Wrestlers may “refer to the artist’s early professional training.” Similarly, Dunham’s inclusion of a female bather in one of his new canvases merges his former practice with his current efforts. In Any Day, one wrestler’s legs appear to be kicking the bather, forcing the artist’s previous body of work out of the way.
Dunham insists that he doesn’t think in the metaphorical terms that Robertson and Fort suggest. After the women of “Bathers,” he wanted to paint “maleness,” and wrestling simply occurred to him “as a universally understood and practiced ancient activity that seemed to have some sort of archetypal signification.” He saw it as a gendered subject, associated with boys and men.
Like Eakins, Dunham signs his pictures in a particularly bold way (The Wrestlers featured the former artist’s name and “1899” etched like graffiti onto a gym wall). At the top of All Day, amid the bright pink sky, he scrawls, “C.D. (March–Sept. 2017).” He makes his struggle with his materials explicit: any viewer can see how long it took him to grapple with the painting. Dunham often writes the names of the intervening months in pencil. The markings become a diary of sorts, a record of labor. They’re also reminiscent of the desperate scrawls of an inmate marking time on a cell wall: if the artist is autonomous, he’s also a prisoner of the canvases he’s started. 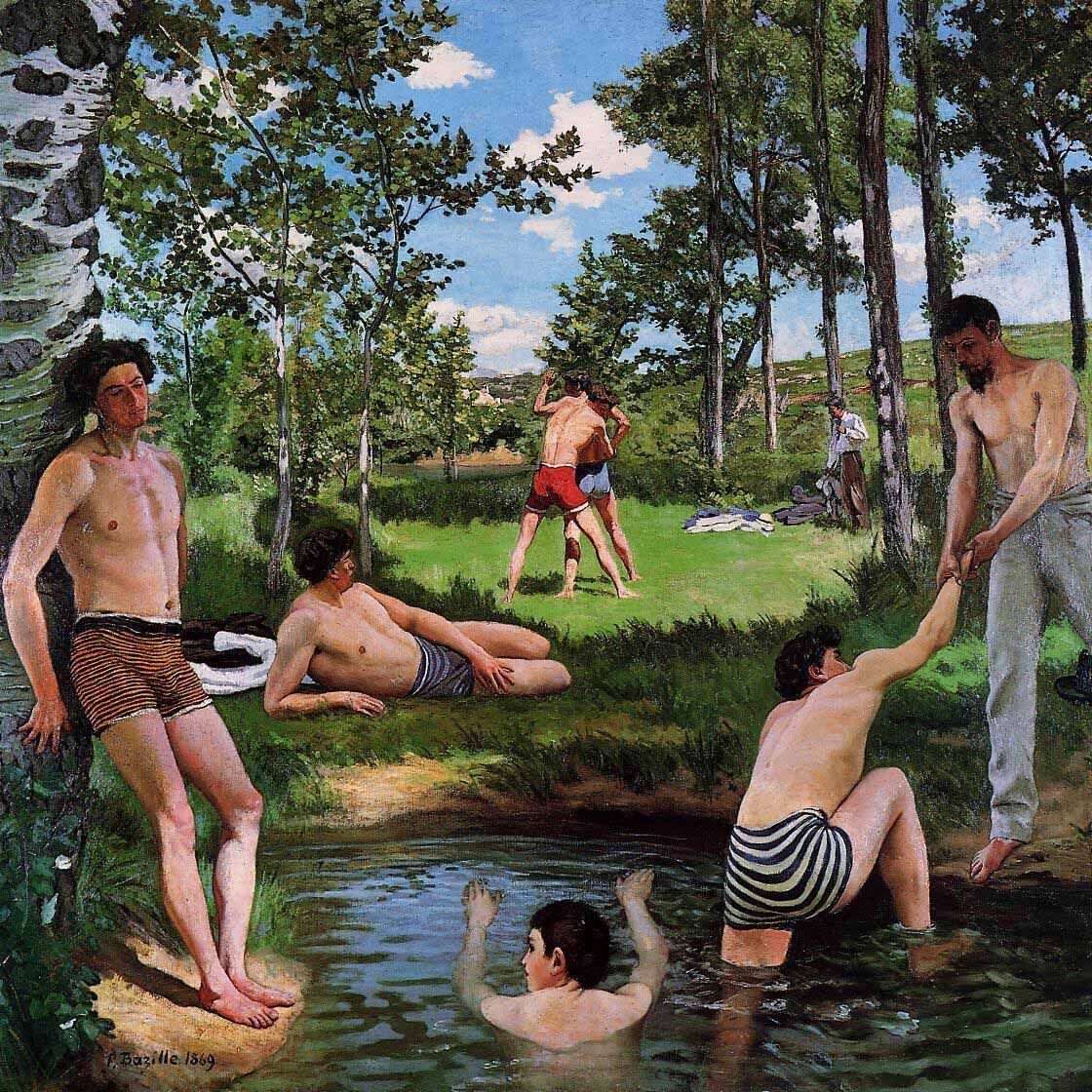 Decades before Eakins painted his masterpieces, French Impressionist
Frédéric Bazille
united bathers and wrestlers in Summer Scene (Bathers) (1869). While boys swim in and lounge around a natural pool in the foreground, sun shines on two wrestlers at the center. One lounging boy looks on at the spotlit fight, amplifying the sense of theatricality and spectacle. The tussling figures become actors in a dramatic production as the painting examines the acts of watching and being watched.
Though he’s clearly connected to a legacy of painting-about-wrestling, Dunham’s recent work includes an interesting addition: animals. He grew up on a farm in Connecticut and recalls “deep memories about black birds all over the place.” His dark birds and dogs are sharply-angled and geometric, origami-like forms.
“I have been thinking about dogs and birds and animals that have ancient and possibly mythical relationships with humans,” he says. Dunham’s animals are painterly, filled with evidence of the artist’s hand. They stare directly, confrontationally, at the viewer. “For me it’s interesting to have this big dark shape hovering in the painting,” says Dunham. A painter can wrestle with himself and his material for years, but the specter of death, that ultimate final struggle, always looms.
Alina Cohen
Related Stories 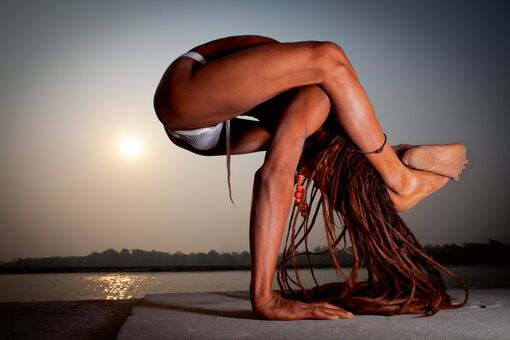