Paris Photo L.A. Presented Los Angeles as a Market Player and a Place Where History Is Made 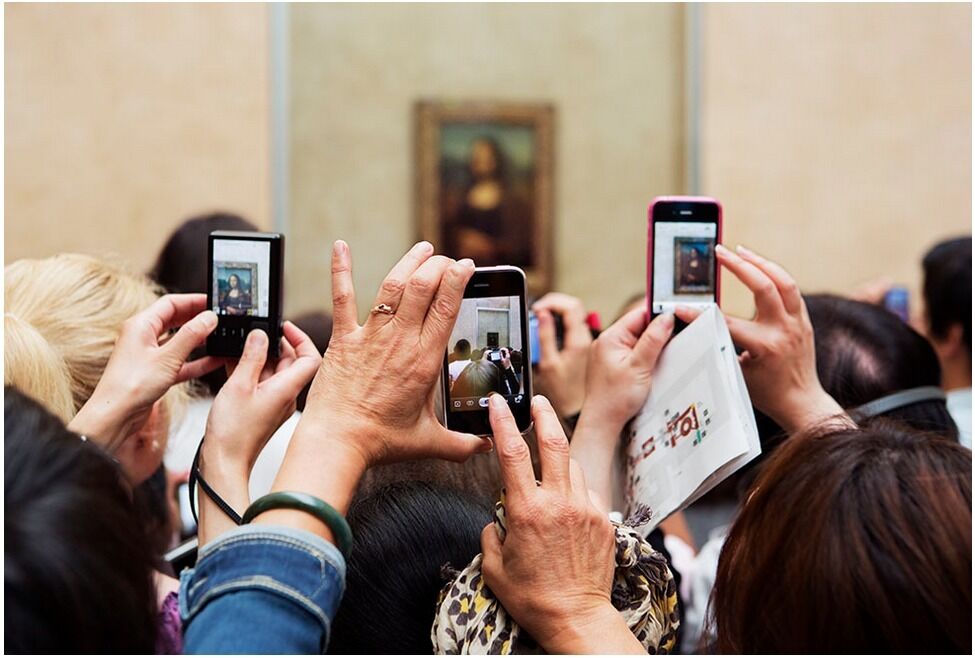 Martin Parr
Paris - monalisa, 2014
Galeria Lume
And it’s not just the French who are colonizing Hollywood—the city is currently a magnet for New York gallerists and artists seeking more space for less rent. In fact, some 50 galleries have opened in the City of Angels since 2013 (the same year that Paris Photo descended on Paramount’s back lots). With Adam Lindemann unveiling Venus Over Los Angeles this past weekend, and Hauser Wirth & Schimmel slated to open a 100,000-square-foot space downtown in early 2016, the message is clear: Los Angeles is not simply an arts destination but a market player.
Paris Photo L.A. certainly reflects this turn of events. In its three years, the fair has drawn crowds of more than 15,000 collectors, aficionados, and culture vultures. It has attracted some 80 exhibitors from 17 countries, including many from lands far away from California. Support for local photo galleries is distinct—this is, after all, the capital of the motion-picture industry—but entry to the fair isn’t dependent on dealing exclusively in the beguiling medium. The fair places an emphasis on art-book dealers, including Aperture, Damiani, and Printed Matter, as well as those that count themselves more broadly as dealers of contemporary art. 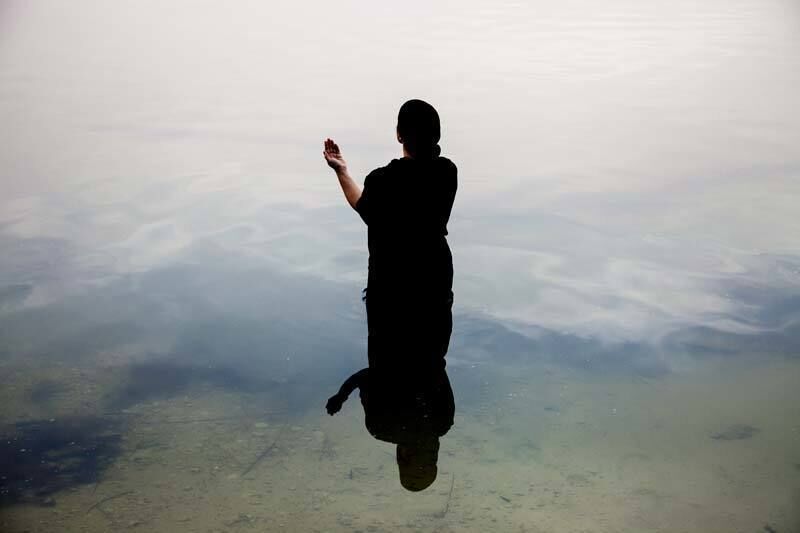 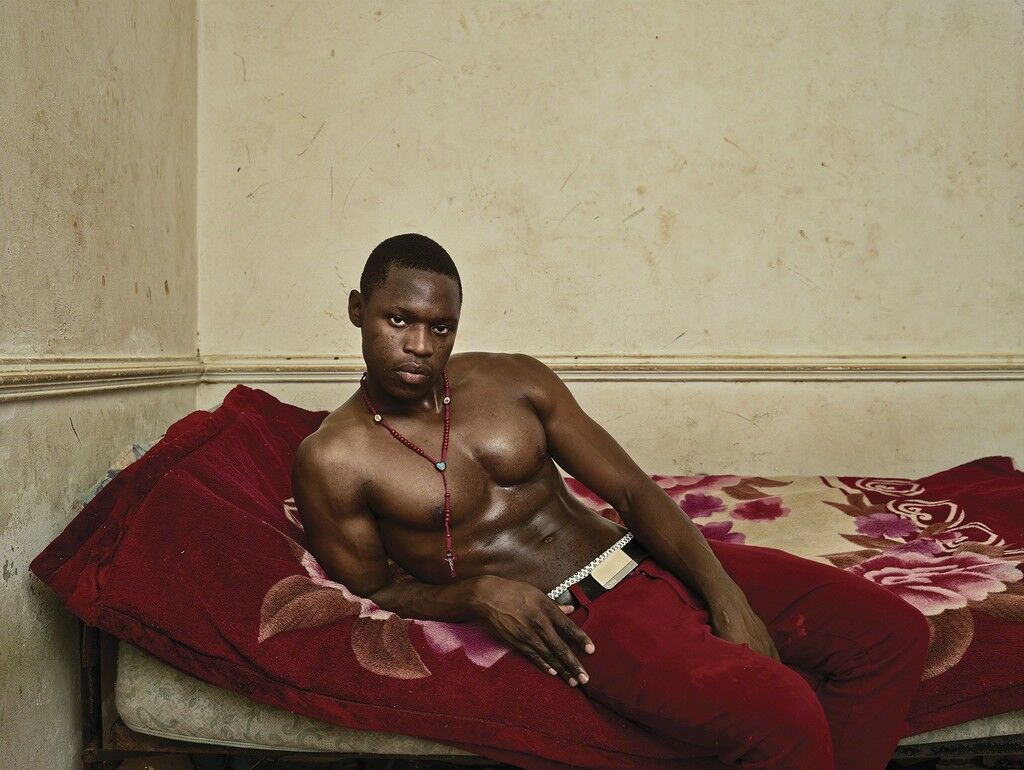 Pieter Hugo
Luis Matanisa, Capetown, 2013, 2013
Aperture Foundation
Take for example, MAMA, an experimental gallery in L.A.’s downtown Arts District run by Adarsha Benjamin, who is recognized around town as a genreless artist and a frequent James Franco collaborator. Hung salon style in the New York brownstone-esque space were works by local darling
Cole Sternberg
, known mostly for his spray-paint-laden creations. His photocollage transfers on wood, of varying sizes, often skate between figuration and abstraction in the same composition—all inspired by his grandmother’s den. A rogue piece of grannie-pattern carpet also occupied the space—a relic of a film shoot—as did coordinating curtains that, Benjamin exclaimed, further enhanced the immersive quality of Sternberg’s ethereal-yet-spooky series. 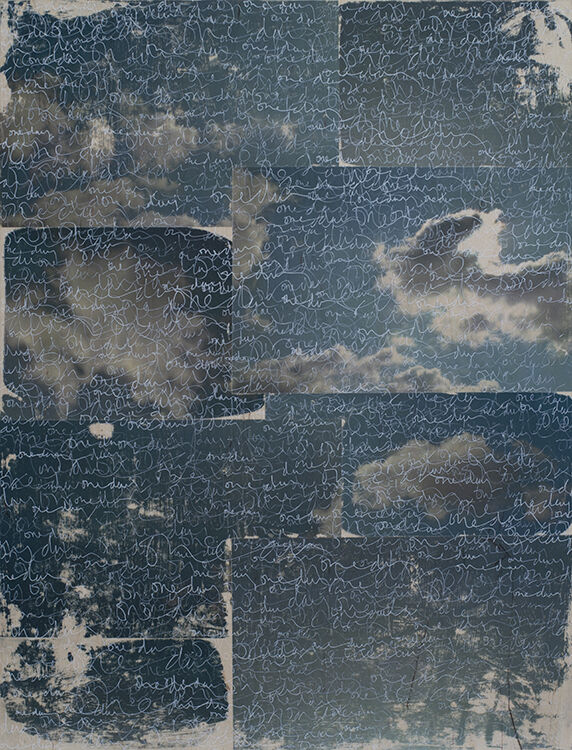 Cole Sternberg
the view when the roof has blown away , 2015
MAMA 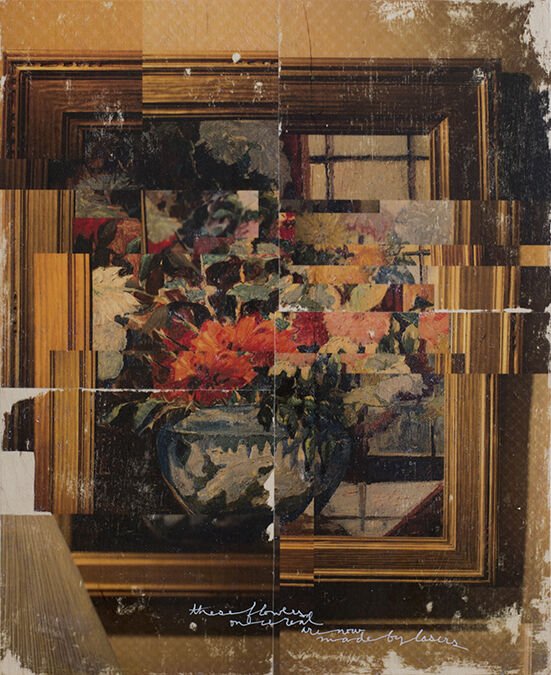 Cole Sternberg
these flowers once real are now made by lasers, 2015
MAMA
Advertisement
Similarly, LAM Gallery—launched last year with unexpected exhibitions by Monique Prieto and Dani Tull—brought a 2005 series by
Zoe Crosher
titled “Out the Window (LAX),” in which the versatile artist holed up in different hotel rooms across Los Angeles and photographed various perspectives of the airport. Director Eva Chimento remarked that she had been vying to show this 31-part series (the pieces are priced at $15,000) for a long time. “They give me goosebumps!” she squealed.
Los Angeles has long been an inviting backdrop for photographers and their medium—the star-studded Sunset Strip and the rolling hills of Hollywood have inspired the likes of
Slim Aarons
,
Julius Shulman
, and LeRoy Grannis. In fact, the legendary Grannis was the focus at M+B, one of L.A.’s top photo purveyors, with more than a dozen large-scale prints of his surf pictures that defined the sport in the 1960s and ’70s. Granniss’s brand of seductive, carefree cool created the image and fantasy of the beach sport as the ultimate California dream. Come October, TASCHEN, another exhibitor, will release a gigantic tome dedicated to wave riding, called Surf, for which executive editor Jim Heimann combed through M+B’s archives and included plenty of groundbreaking images. The veteran book publisher also released a 2006 monograph on the surfing royal. 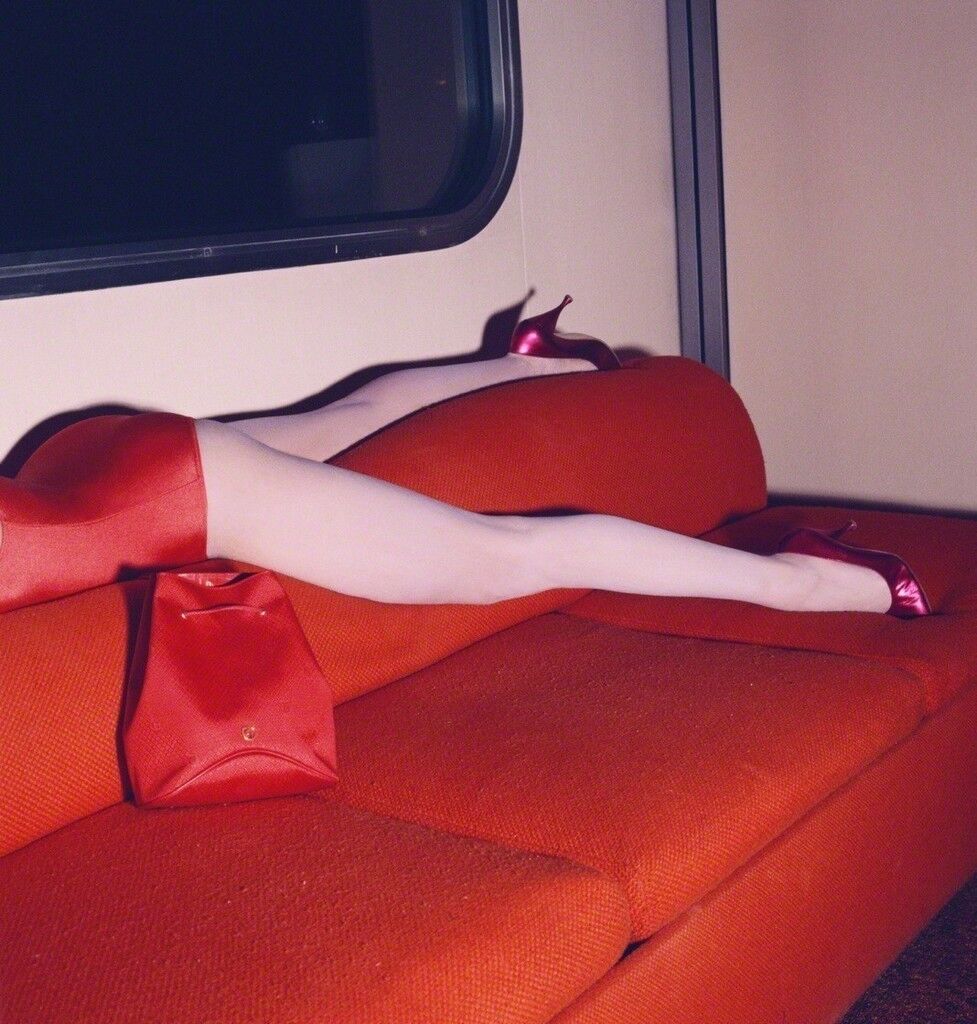 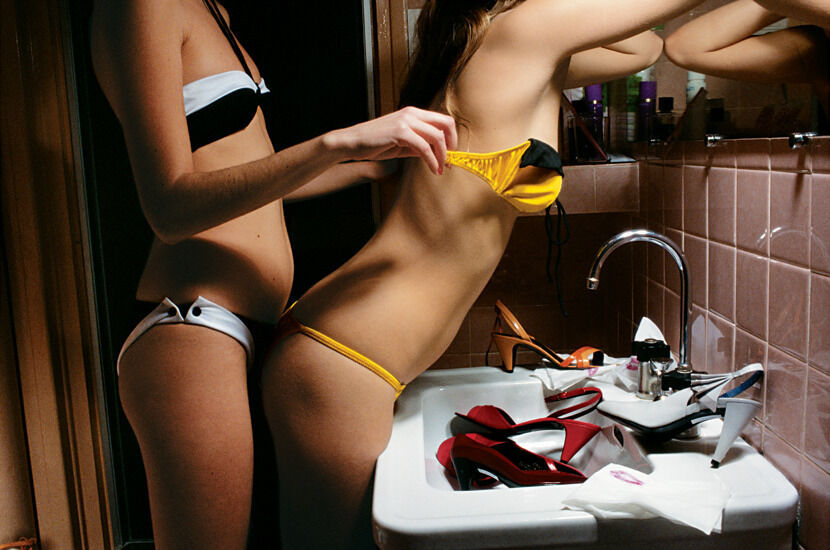 Guy Bourdin
Roland Pierre Campaign, 1983
Louise Alexander Gallery
While the fair was packed with big names—
Guy Bourdin
at Louise Alexander Gallery,
Nobuyoshi Araki
at Little Big Man Gallery,
Mona Kuhn
at Diane Rosenstein—quite a few dealers showcased overlooked photographers. One standout was
Maxi Cohen
, at São Paulo-based Galeria Lume, who, despite being in the collections of New York’s Museum of Modern Art and the Museum of Fine Arts Houston, is barely a recognizable name.
Lume co-director Felipe Hegg brought a selection of the filmmaker-photographer’s works from the 1980s. These were part of a series of selfies, one might say, she took in ladies’ rooms that capture women primping themselves in mirrors as she lingers behind them. If the subjects noticed Cohen snapping their portraits during these intimate moments, then they certainly played coy. The series spans from the ’80s to today, with prices for individual prints ranging from $1,500 to $9,500. Hegg also brought the haunting-yet-ironic “Specimens From the Amazon” series from 2010, featuring a miniature screen that loops a video of Cohen’s investigations into disappearing Brazilian Amazon natives. A monocle is attached to a wooden frame encasing the video, further inviting the viewer to be a voyeuristic anthropologist. 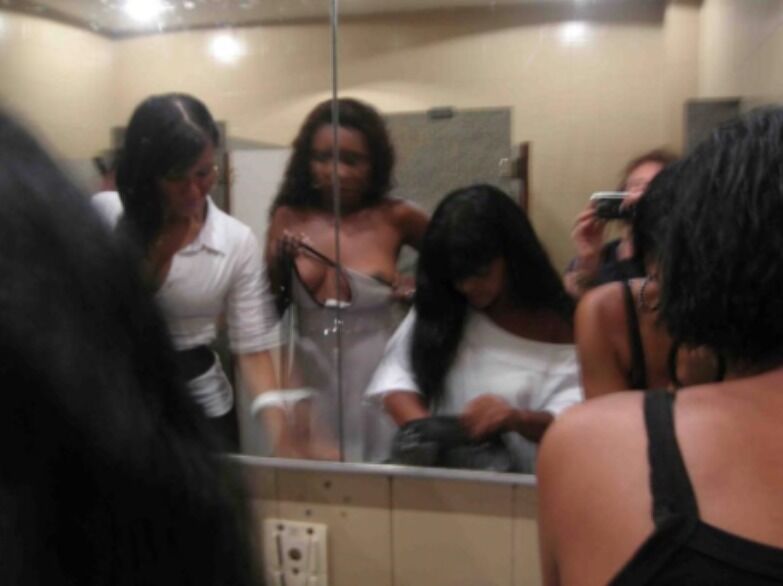 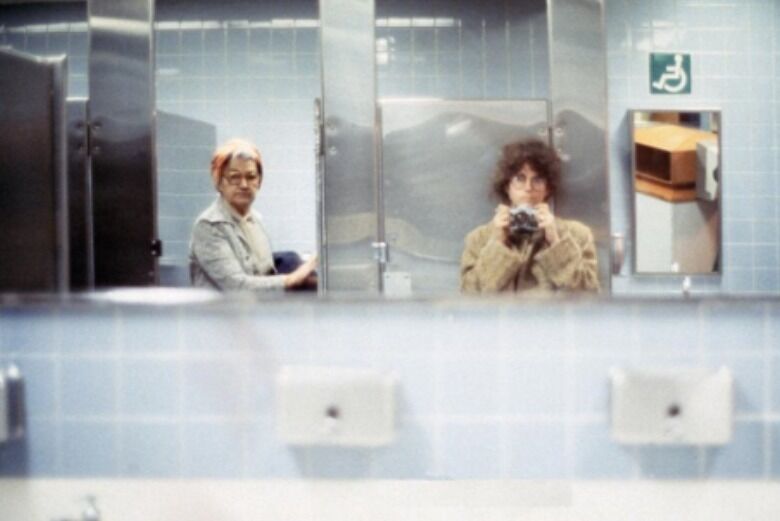 Maxi Cohen
NEW YORK STATE THRUWAY - LADIES ROOMS AROUND THE WORLD , 1978
Galeria Lume
The study of humans is implicitly connected to photography’s very nature, so the medium has earned a reputation as an avenue for investigation. And Paris Photo, which prides itself as an event where photography’s versatility can thrive—not just in the market—staged a powerful non-selling exhibition titled “California Unedited!” This presentation, featuring R.J. Arnold’s documentations of 19th-century America, revealed the extent to which photography can shift between pure aesthetics and reality. 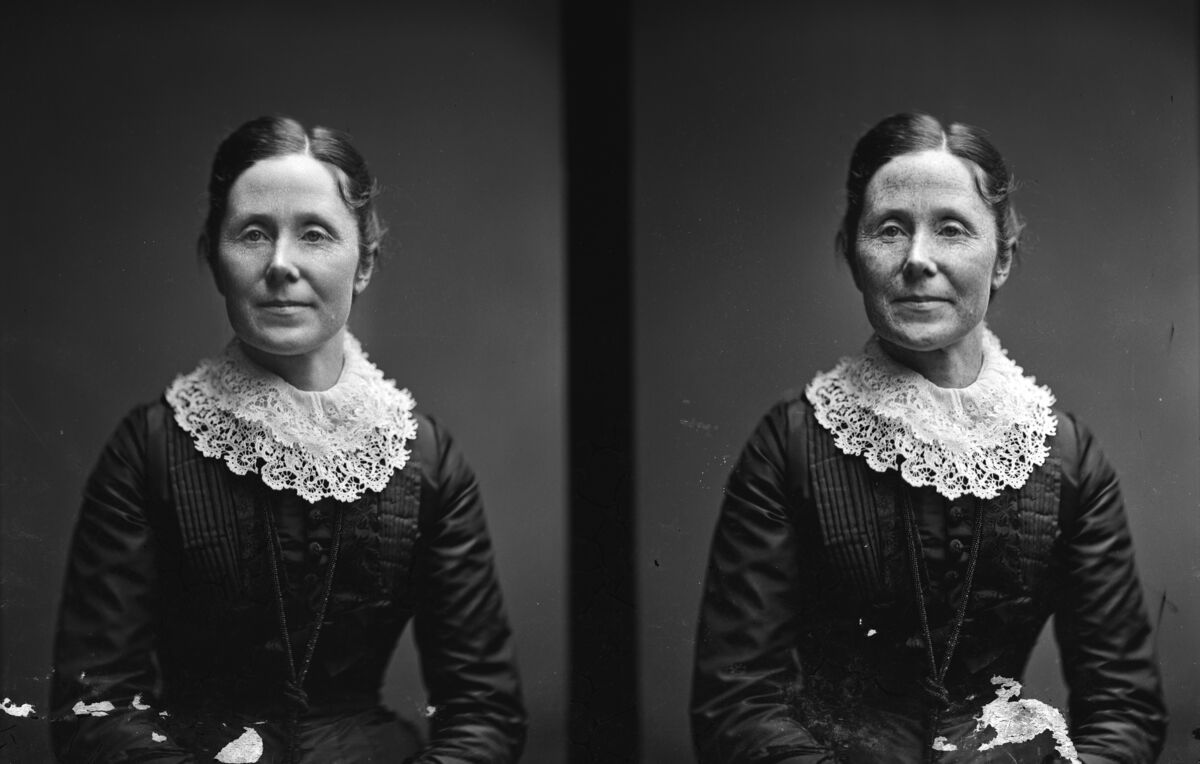 The story behind these works is one of pure luck and coincidence. Curator
Anthony Lepore
, a photographer by trade, was dragged by his aunt to her place of employment at the Historical Society in El Paso de Robles, in Central California, on Thanksgiving day, after being stuffed silly with turkey and pumpkin pie. There, in the basement, dozens of large boxes had been deposited, and his aunt asked for his professional advice as to whether she should toss them out.
Inside, they found glass plates revealing portraits of the many identities that make up the United States: Latinos, Native Americans, African-Americans, Asians, and Caucasian settlers. Lepore demanded that his aunt keep the boxes and dedicated himself to researching the project, finding very little information about Arnold—only that he was British and had made his way West in the 1870s and ’80s. With the help of the Historical Society, Lepore digitally archived the works and what resulted is one of the most revealing glimpses into post-Civil War America ever recorded. With the archive’s mounting at Paris Photo L.A., those involved in the project hope it might be snapped up by a public collection. Time will tell—a maxim that speaks to the strides Los Angeles has made in shifting attention toward its deep cultural offerings.
Julie Baumgardner
Explore Paris Photo L.A. 2015 on Artsy.
Related Stories