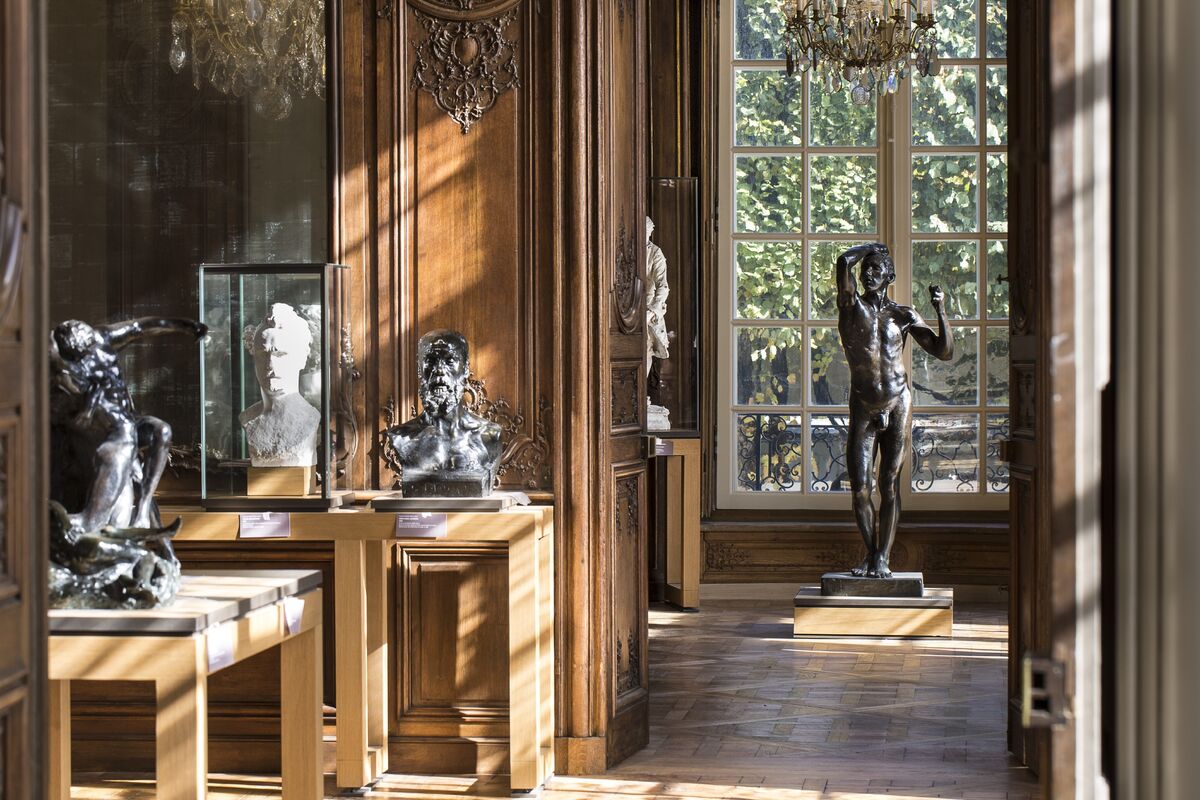 It doesn’t take a big Thinker to recognize the Musée Rodin’s huge popularity. Even though the 18th-century, garden-clad complex’s central pavilion, the Hôtel Biron, has been closed for renovations since 2012, the museum has seen 700,000 annual visitors and even kept special exhibitions on display (until January 2015, when the whole of the building was shut down to complete renovations). Tourists can’t leave Paris without their hit of realist sculpture, so it seems. And what unveils on November 12th—what would have been
Rodin
’s 175th birthday—will add a feat of restoration.
Fair warning: neither starchitects nor steel-and-glass facades were employed in this venture. With the involvement of the American philanthropist Iris Cantor and the French Ministère de la Culture, the museum spent three years reconstructing the crumbling rocaille building, which had served as Rodin’s Parisian studio until his death in 1917. In all that time and during the following century, the building had not once received structural reinforcement.
“Obviously, a major renovation scheme on a building that has remained virtually untouched since the 18th century has its share of surprises,” explains the institution’s director, Catherine Chevillot. Its shredded parquet floors bowed and creaked more than might be considered quaint and charming, and the museum demanded numerous repairs, including replacing features with precise historic replicas. “Each discovery called for an appropriate solution,” says Chevillot. “It was a unique occasion to do things the right way!” The French hardly skimp when it comes to their heritage. “The museum is at a historical turning point,” claims Chevillot. That’s not simply for its innovations in wheelchair accessibility (a rarity in Paris) and electrical and digital rewiring (the lights had been running on Victorian circuits). The museum also collaborated with Farrow & Ball on the paint: Biron Gray, a mousey taupe color, was created especially for the project. Sculpture and light are still linked lovers, in display at least, for a white backdrop can neuter marble contours.
The museum’s partnership with Farrow & Ball goes beyond furnishing. Samples were chipped from the mansion’s wallpapers and existing layers of paint, often uncovering unexpected twists like pulsating reds and gem greens, jewels stashed in the walls, so to speak. But it was this gray-green, a match to the heritage paint company’s Blue-Green No. 91, which was most commonly found.
As much as the museum’s nipping and tucking is a structural necessity, with a new face also comes a retooled vision. “It is now ready to open up to the rest of the world, to engage in international collaborations, and welcome the public of the 21st century,” adds Chevillot of the reboot. Rodin was a sculptor whose own process involved many studies—explorations in plaster mostly—and step-by-step scaling. There are a little over 30,300 works in the museum’s collection, 6,766 of which are sculptures, the majority of those plaster models. Almost in equal number are the antiquities serving as Rodin’s inspiration, forms that guided him in his own works. 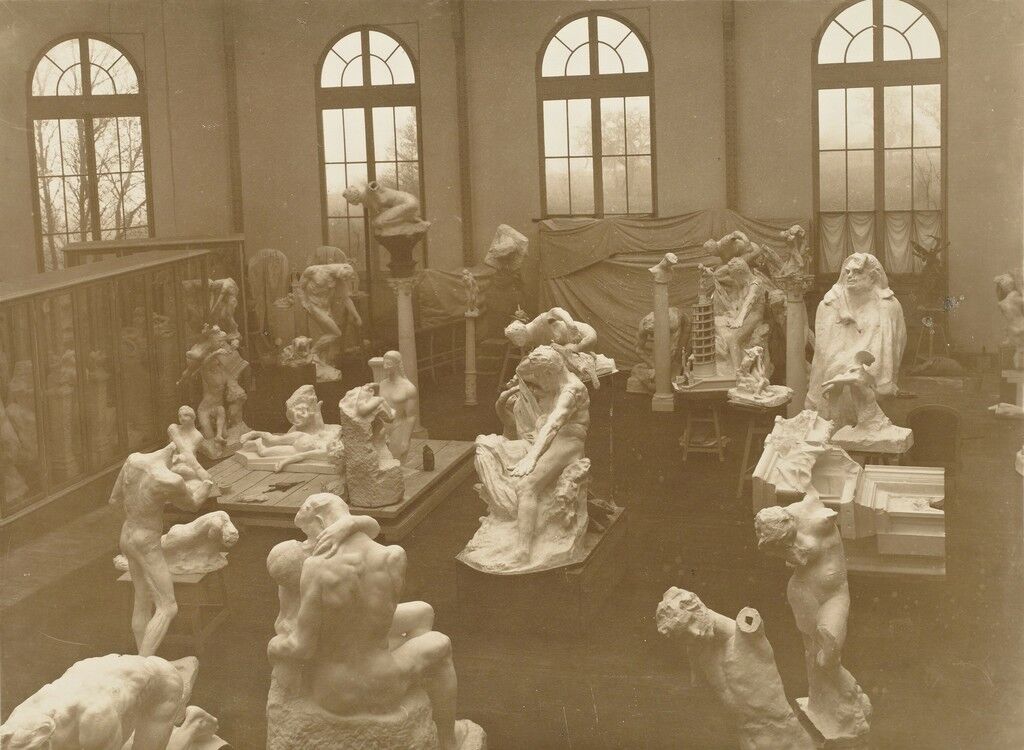 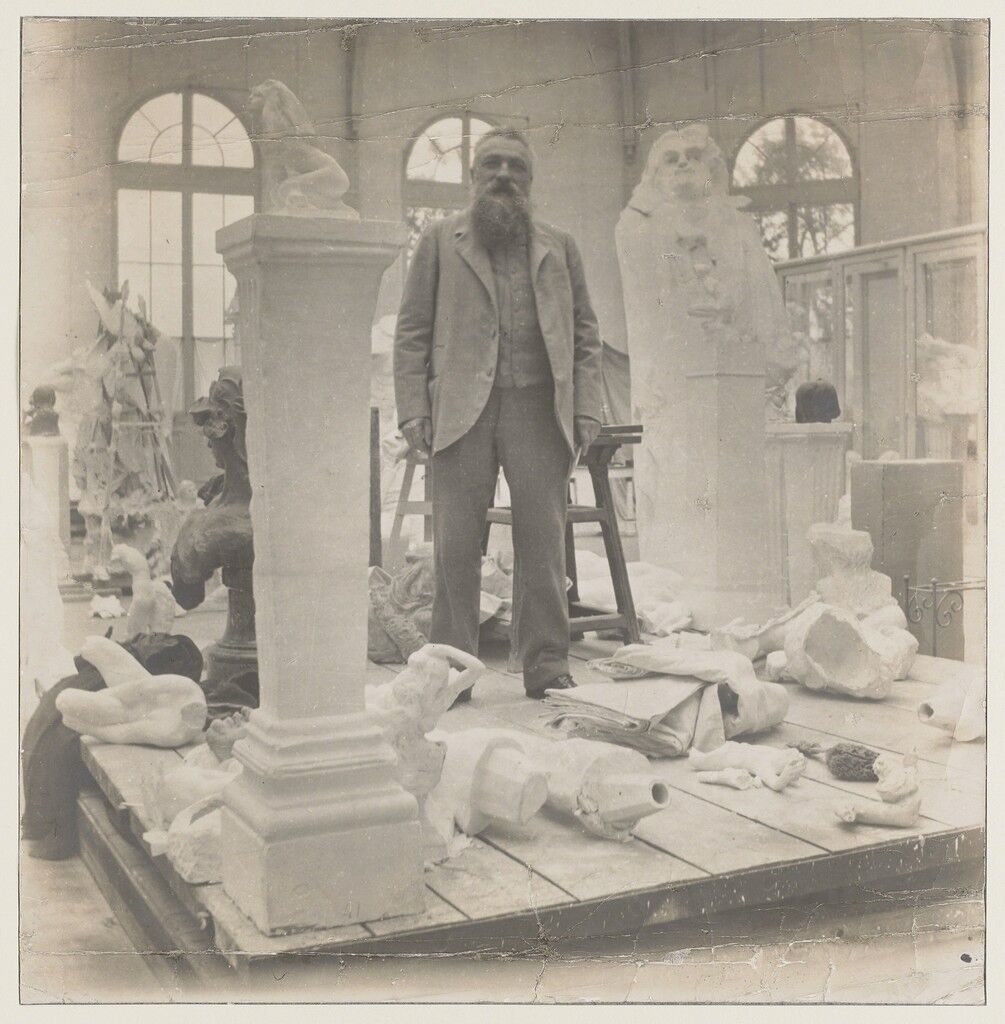 Eugène Druet
Rodin au milieu de ses œuvres dans le Pavillon de l’Alma à Meudon (Rodin among his works at the Pavillon de l'Alma), c. 1902
"The Laboratory of Creation" at Musée Rodin (2014-2015)
Advertisement
The collection also includes about 7,500 photographs. Rodin famously captured his own works at various points throughout the day to explore how light affected them. The museum has, in the past, often kept these experiments in documentation in their storage facilities, but many will now be installed in the museum. So too with the collection’s countless paintings by Rodin’s peers, like
Claude Monet
and
Vincent van Gogh
. The works suffered a similar fate as Rodin’s photographs; even such whispered-about canvases as Monet’s Belle-Île (1886) or Van Gogh’s Père Tanguy (1887) hadn’t seen natural light in decades.
The museum also devotes an entire room in the Hôtel Biron to
Camille Claudel
, who joined Rodin as a studio assistant in 1884 at age 19 and remained there for nearly a decade—and who is now regarded as a sculptural genius. Claudel and Rodin’s passionate, illicit relationship—a factor in the unraveling of her mental state (she was schizophrenic)—has often undermined her status in art history. However, Claudel’s creative dialogue with Rodin influenced him greatly. And, beginning in 1952, the museum worked with her family’s estate to acquire much of what was left of her collection (Claudel attempted to destroy her works out of paranoia that Rodin was trying to steal them). They are now taking the time to contextualize and rewrite Claudel’s narrative in art history.

Much of the museum’s storied appeal lies within the garden, the plein air home to Rodin’s bronze masterpieces: The Burghers of Calais (1885), The Gates of Hell (1880), and The Thinker (1888). The garden is also slated as ground for this newly shifted curatorial lens, with the integration of contemporary art programming. In its next special exhibition, “Between Sculpture and Photography,” works by
Richard Long
,
Giuseppe Penone
, and
John Chamberlain
will spark a dialogue with Rodin’s oeuvre. But the garden has long served as much more than an exhibition site for the community of Paris—on any given sunny day, you can expect to see Parisians settled in the garden for an ice-cream cone or coffee. It’s an integral respite and place of reflection for the city, which could be said about the museum itself.
—Julie Baumgardner
Follow Musée Rodin on Artsy.
Related Stories