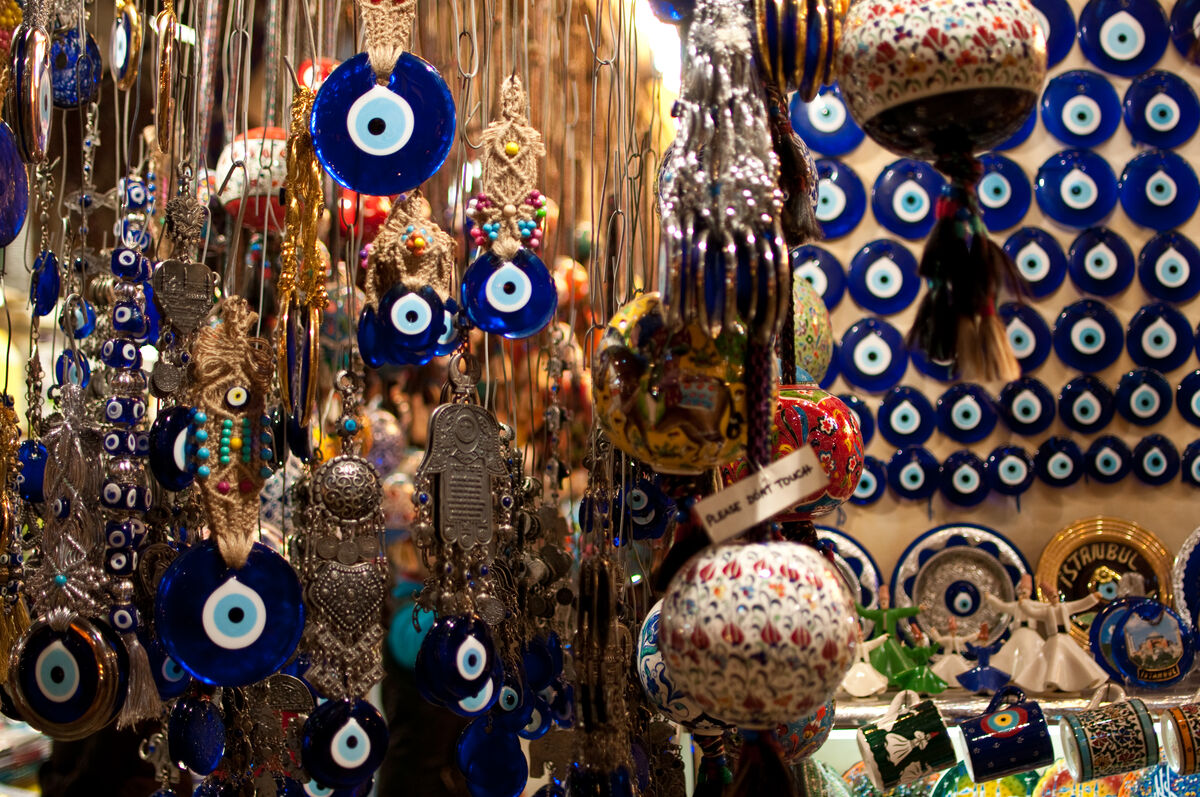 For thousands of years, the look known as “the evil eye” is said to have afflicted people worldwide. Rooted in numerous ancient civilizations—including those of Mesopotamia, Egypt, Phoenicia, and Greece—and the Old Testament, it’s been believed that with a covetous gaze, a person can curse a fellow human being, their children, or even their property with misfortune, illness, or death.
Believers in the evil eye have fashioned defenses against it, in the form of incantations, objects, and rituals (like spitting three times). But one talisman has proved to be the most lasting and widespread: an amulet of an eye, which is meant to deflect envious onlookers.
“This idea that a malign glance can do grievous harm to person and property is of great antiquity,” anthropologist Alan Dundes explains in The Evil Eye: A Casebook, a volume of scholarly essays that assesses the “pervasive and persistent influence of the evil-eye belief complex.” This age-old conviction, Dundes writes, is found across Indo-European, Semitic, and Circum-Mediterranean cultures of the past and present. 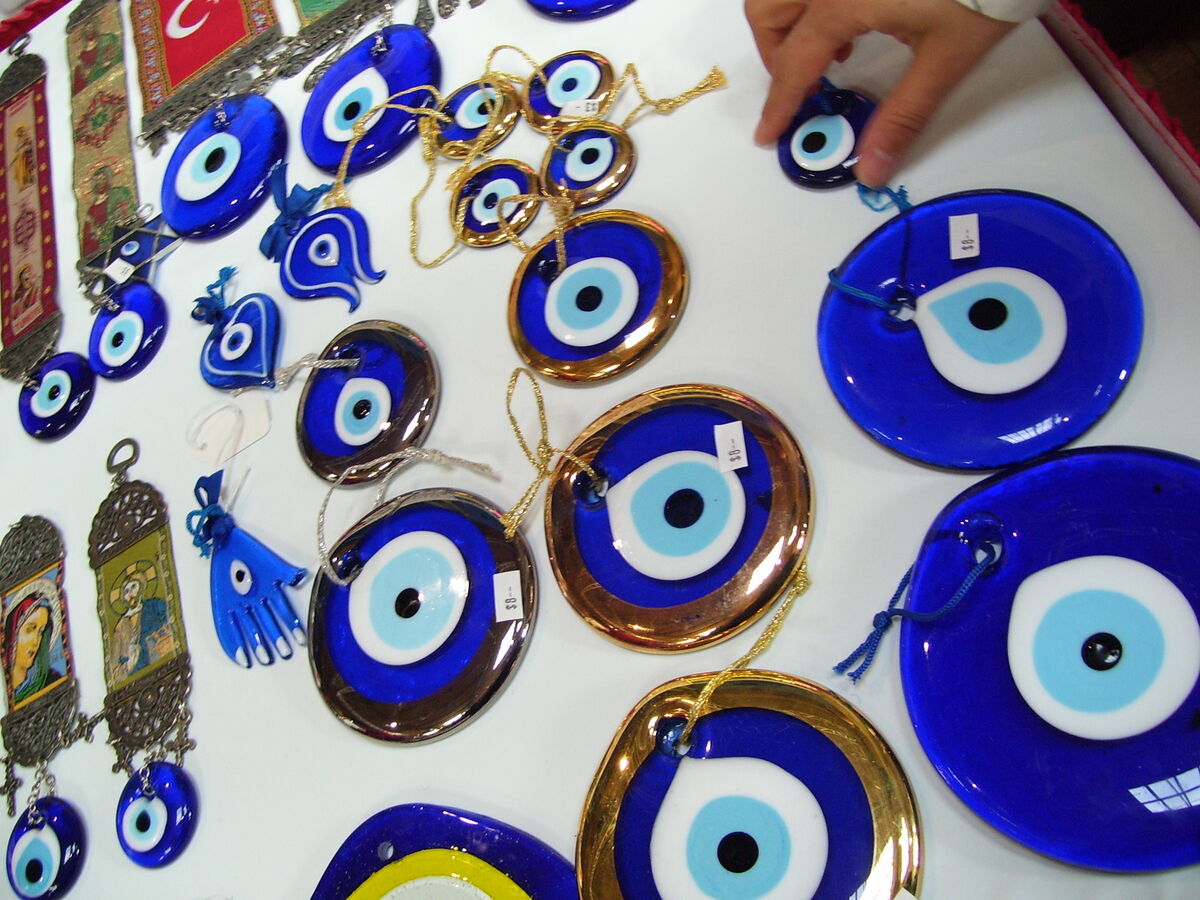 Belief in the evil eye, according to anthropologists, is grounded in an understanding that there is a limited quantity of good—such as wealth, livestock, and well-being—to be shared among a society. In turn, to express jealousy with a look, or to verbally praise another’s “good” (even if one is well-intentioned), is to risk that good being taken away. So, the practice of wearing an image of an eye, looking outward, was adopted to offer a sense of security to the fearful—a means of constantly keeping eye on the world around you.
The first accounts and artifacts related to the evil eye date back to ancient Mesopotamian civilizations. Discussion of the phenomenon was found in the prayer-like inscriptions of cuneiform tablets from Sumer and Babylonia, dating between 3300 and 3000 BC. And in the nearby city of Tell Brak, amulets dubbed “eye idols” have been discovered. Small alabaster figures with large eyes, these artifacts are not known to be explicitly connected to the evil eye, but scholars, including theologian John H. Elliott (the author of four texts on the evil eye), have noted a probable correlation.
“The best supported theory associates these eye idols with the worship of the goddess Ninhursag, Sumerian goddess of childbirth,” Elliott once wrote. “These eye idols and the worship of the protecting goddess of childbirth were likely linked to Evil Eye belief, since newborns, infants and birthing mothers have been deemed especially vulnerable to the Evil Eye in all Evil Eye cultures.” Similar ocular symbols that date back to 3000 BC were also found across the Mediterranean region, and alongside the “eye idols,” they are considered historic precursors to later uses of eye amulets as shielding devices. 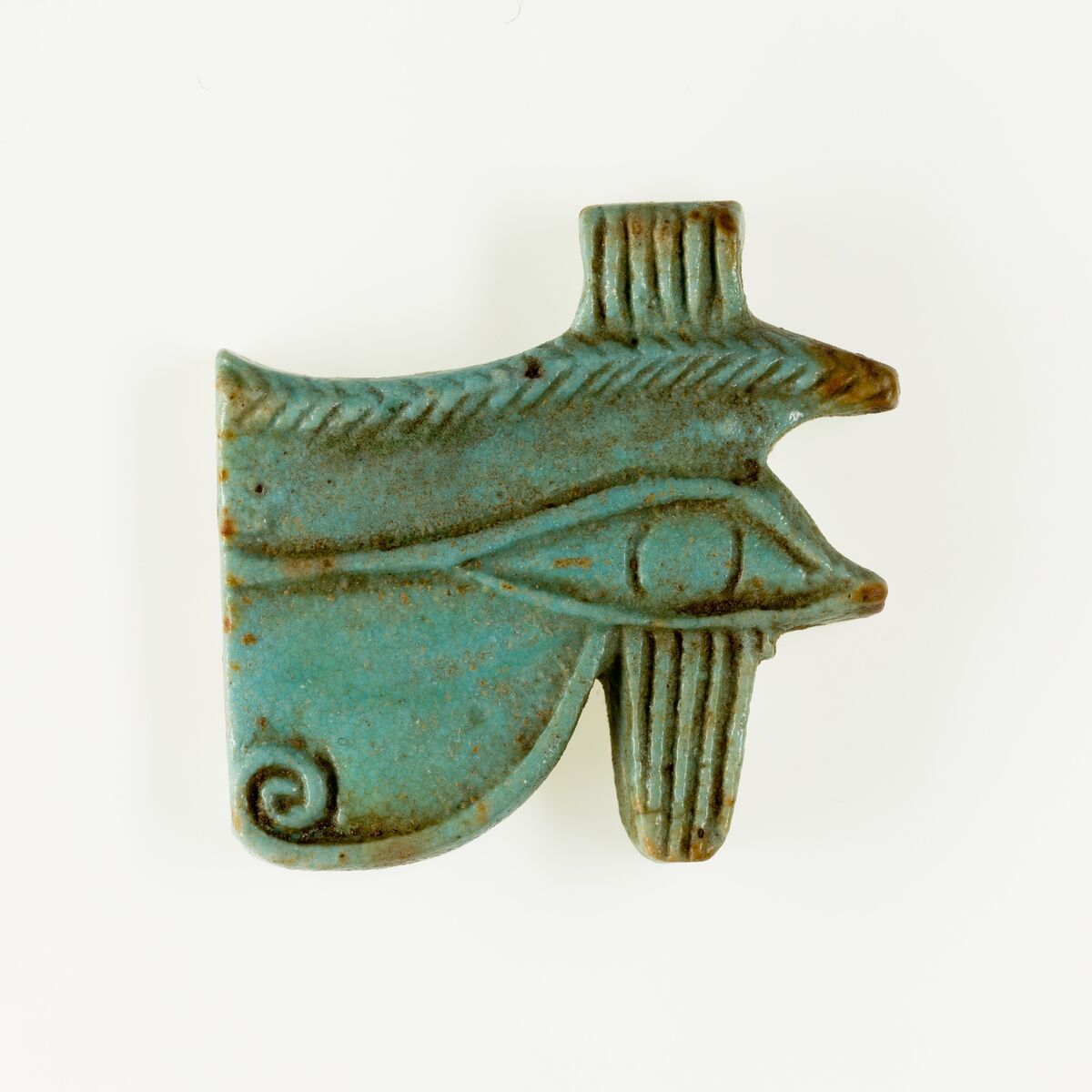 Wedjat eye amulet from Egypt, 664-332 B.C. Photo via The Metropolitan Museum of Art. 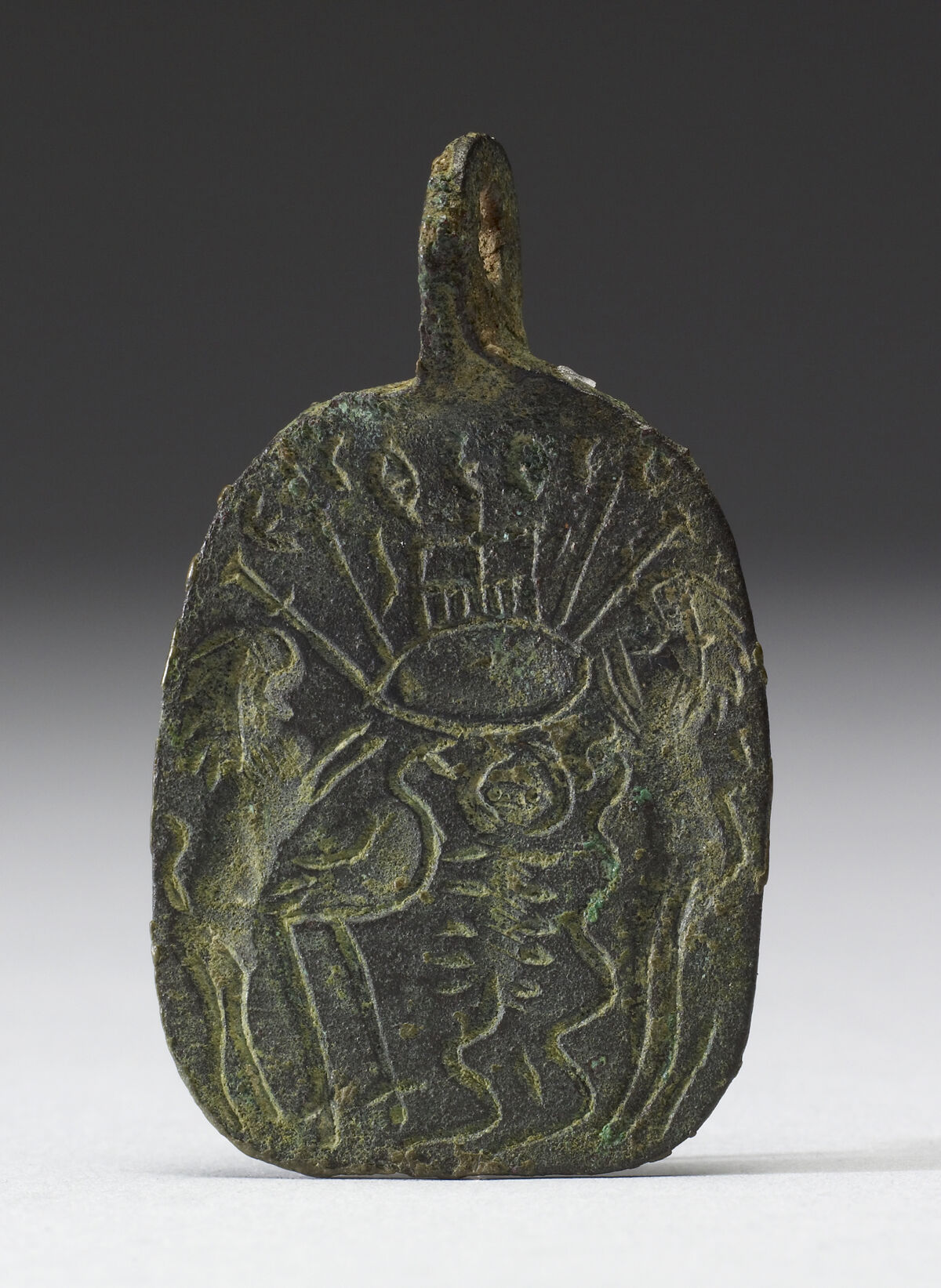 Amuletic Pendant from the Byzantine Empire with the inscription, “[The] one God overcomes the evil,” 5th century. Photo via the Walters Art Museum.

Advertisement
“The most effective amulet against the evil eye has always been, according to tradition, an image of the eye itself,” notes cultural anthropologist Migene González-Wippler in The Complete Book of Amulets & Talismans. She cites the Eye of Horus, also known as the Wadjet, as an early Egyptian example. This was a protective healing symbol employed in many contexts, including on incision sites after embalming the deceased, on the sides of coffins and boats, and as an amulet worn by both the dead and living.
Like other ritual objects of ancient Egypt, the Eye of Horus was regularly fashioned in a turquoise shade of faience, a type of Egyptian ceramic that was glazed in vibrant hues. The color represented the regenerative, undying power of the sun, and scholars think it may have been used to mimic coveted, semi-precious stones of the same hue, such as turquoise. While there is little evidence to prove that the Eye of Horus morphed into the modern anti-evil eye amulet, they’re connected by their use of a single eye and cerulean color.
The anti-evil eye talisman that we’re familiar with today is known as a nazar in Turkey (Arabic for “eye” or “sight”), or a mati (meaning “eye”) in Greece. Relatively minimalist compared to historic eye-shaped amulets, it takes the form of a glass bead featuring four concentric circles: a black pupil, pale blue iris, white sclera, and deep blue outer layer.
Previous iterations of the amulet were made of dyed clay or ceramic, but the advent of glassmaking in Mesopotamia and Egypt—which may have spread to Anatolia (a region in modern-day Turkey) through trade—resulted in local artisans taking up the practice of hand-crafting the beads in kilns. To this day, artisans make nazar in İzmir, Turkey, where the art has been passed down through generations. 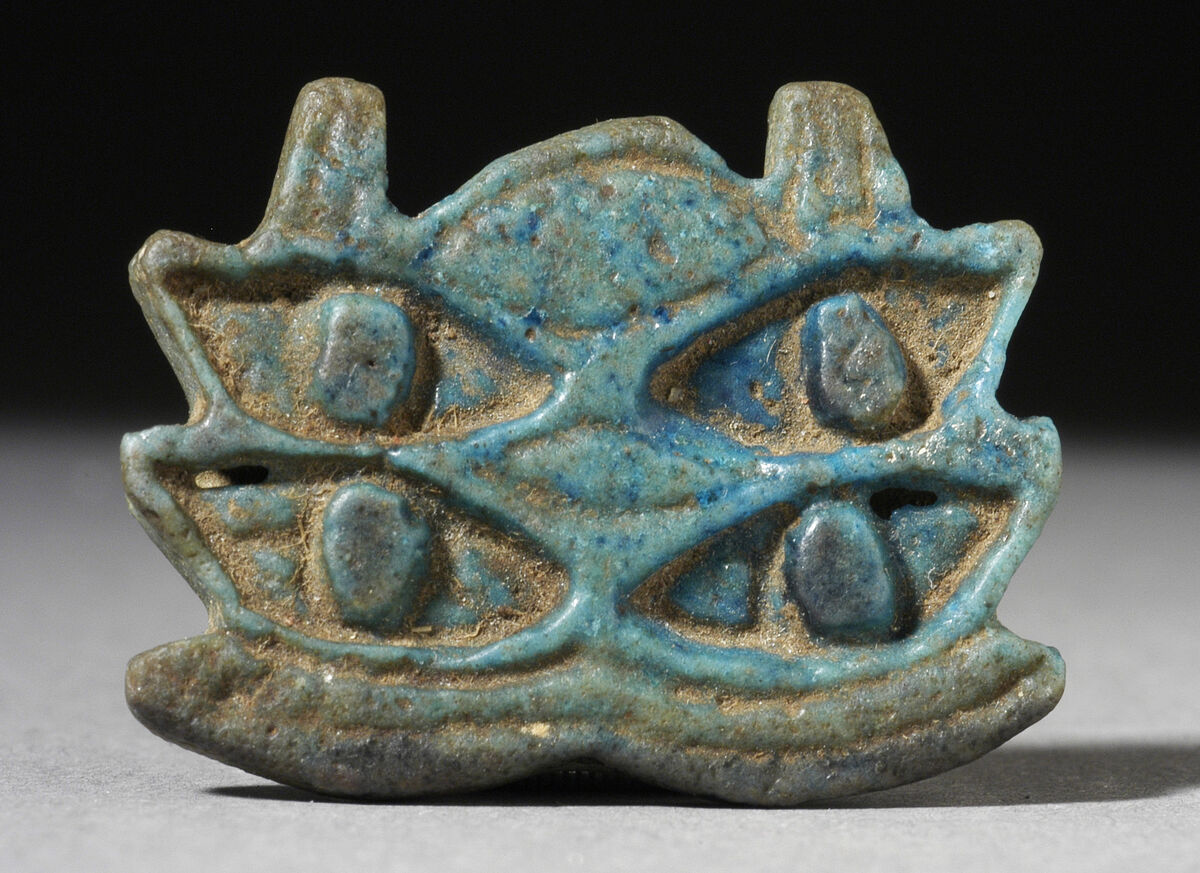 In recent history, however, as the nazar/mati has gained popularity worldwide—in part due to the migration of people from evil eye cultures to America and elsewhere—few amulets are made the traditional way. Tourists visiting bazaars or shopping online will increasingly find plastic versions of the eyes (which are less expensive to produce), or the symbol printed on clothing, or fashioned into jewelry. Widespread present-day interest in the talisman can perhaps be credited in part to the popularity of the “New Age” spirituality of the 1970s, which is experiencing a revival of sorts as of late.
Despite this, many people who wear anti-evil eye amulets today are still likely unaware of the evil eye’s manifold histories. (This could also be said of hamsa or khamsah, an evil eye-warding image of an open hand with an eye at the center of its palm. It’s believed to have originated during ancient times, and now holds varied significance in Hinduism, Buddhism, Judaism, Islam, and Christianity.)
While nowadays, one may see the evil eye and its myriad defensive charms as the stuff of a dated superstition, various belongings in contemporary life are often thought to have the power to ward off evil. As Diana Craig Patch of the Metropolitan Museum of Art wrote in a 2004 essay, “The conviction that a symbol, form, or concept provides protection, promotes well-being, or brings good luck is common to all societies: in our own, we commonly wear religious symbols or carry a favorite penny or a rabbit’s foot.”
What separates the anti-evil eye amulet from other, more mundane good-luck charms is its historical, mystical import and lack of cultural boundaries. It’s an image that mutated and held the global imagination for millennia, connecting those who don it today to ancient times.
Haley Weiss
Related Stories