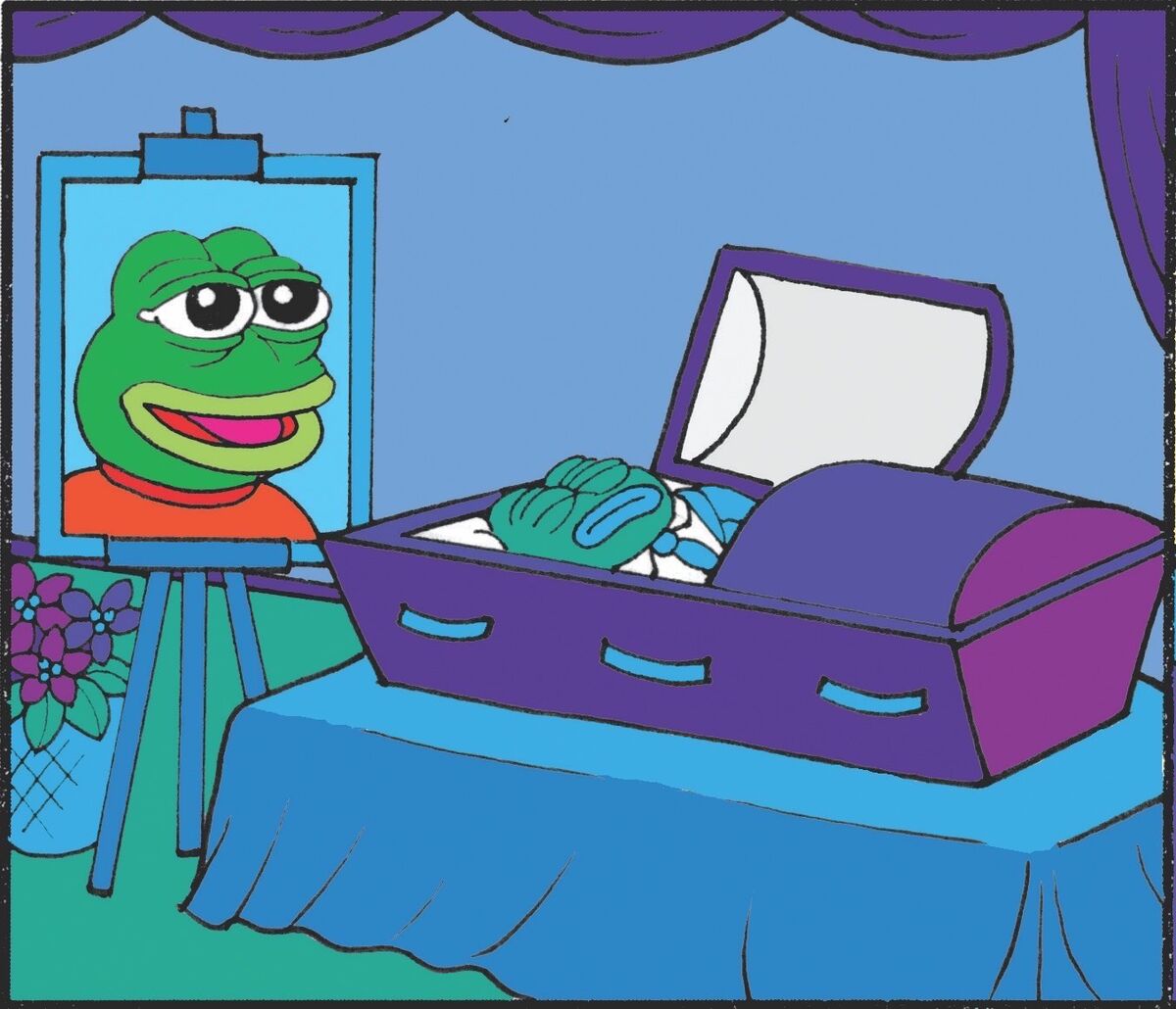 Some day, historians will hold a symposium to discuss how a pot-smoking cartoon frog inadvertently became the posterchild for online racists, anti-Semites, and right-wing trolls in the age of Trump. That luckless amphibian, of course, is Pepe.
By now, you probably know about Pepe’s topsy-turvy genesis. Before notoriously being tagged as a symbol of hate speech by the Hillary Clinton campaign and the Anti-Defamation League, the frog began his life as part of a quartet of animal-human slackers in a comic, Boy’s Club, created circa 2005 by San Francisco-based cartoonist Matt Furie.
That Pepe didn’t traffic in hate, and he didn’t love Donald Trump. He spent most of his time hanging out at home, indulging in bad (but harmless) habits, and throwing up with an impressive frequency. 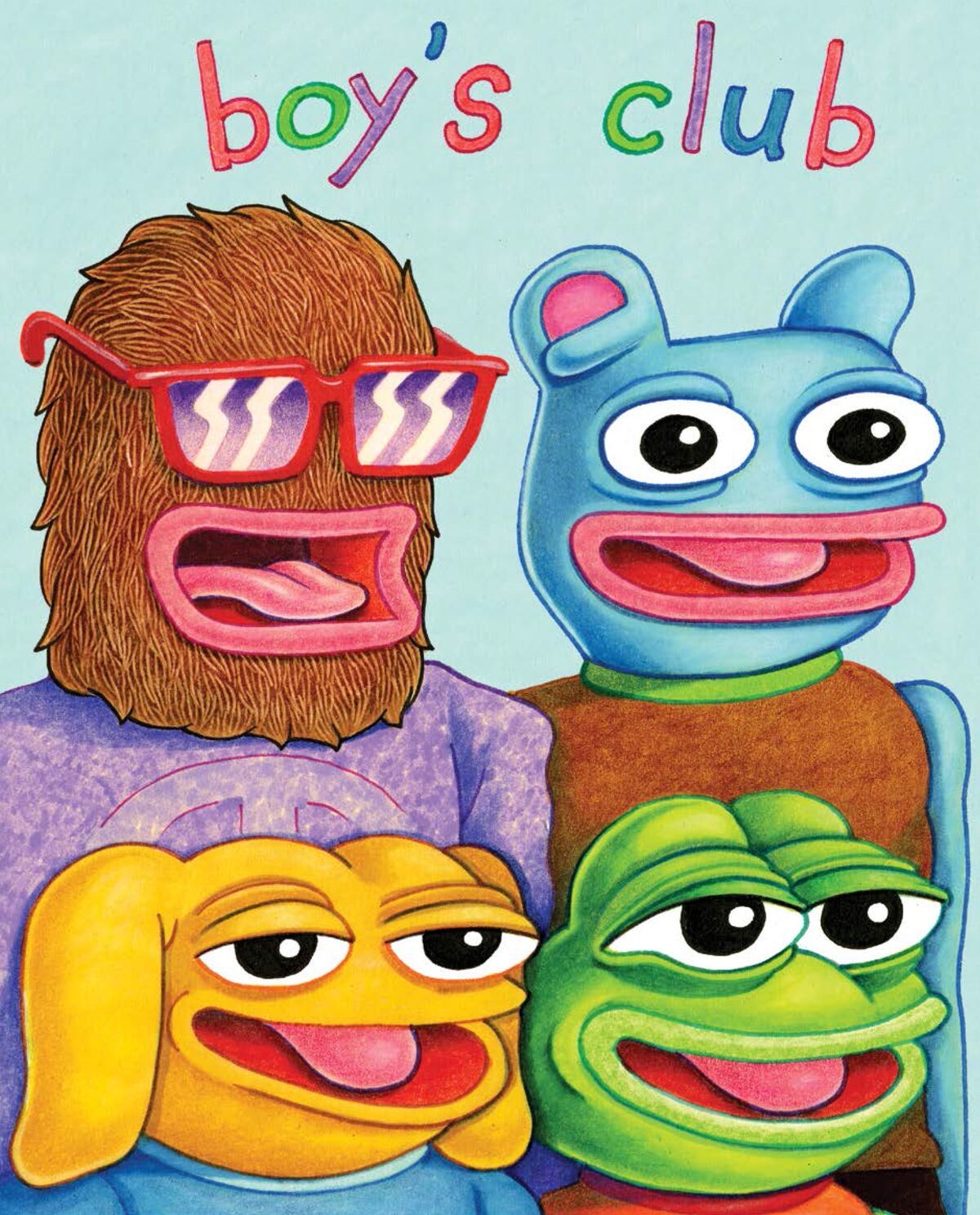 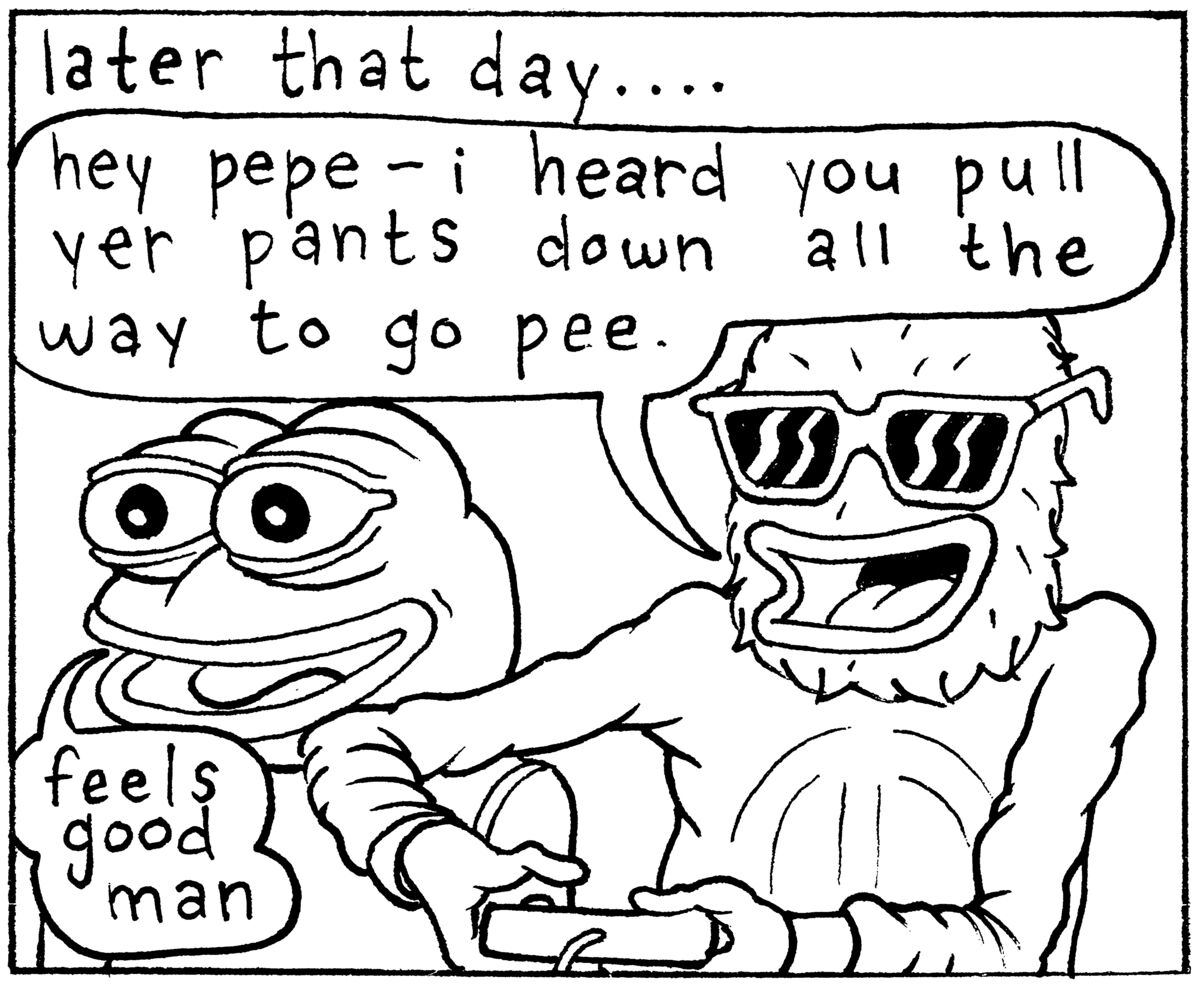 But the internet is a chaotic space, and Pepe and his catchphrase—“Feels good, man”—were soon disseminated into the digital ether. He became a meme, one that was adopted by the 4chan community, and also retweeted by a few celebrities and pop stars. He was such a familiar oddity that, in 2015, prankish artist
Ryder Ripps
made an 18-karat gold bust of Pepe’s smirking face. Matt Furie himself was initially amused by the unexpected groundswell of popularity behind his humble frog.
And then things got weird. As the Daily Beast explained in 2016, the frog had jumped the shark, so to speak, in the eyes of his early adopter fans. Pepe began finding himself with his webbed feet deep in all kinds of awfulness, from memes celebrating the Holocaust to ones that crowed over Trump’s brutal immigration policies. He ended up on t-shirts proclaiming that “Green Lives Matter.” He donned Nazi uniforms and sported a quaff of Trump-style hair or a Hitler moustache.
A version of him with a Make America Great Again cap still lounges on the home-page banner of the Daily Stormer, a neo-Nazi website that bills itself as “the world’s most genocidal Republican website.”
Along the way, Pepe himself seemed to degrade as his image was passed around, copied, and altered. The formerly lanky, pop-eyed character seemed to visibly age, growing puffier and unhealthier. 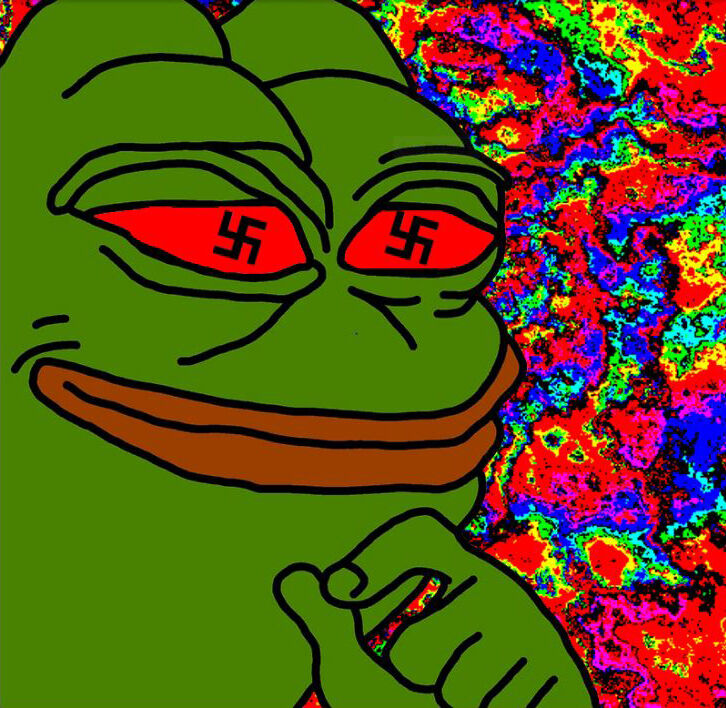 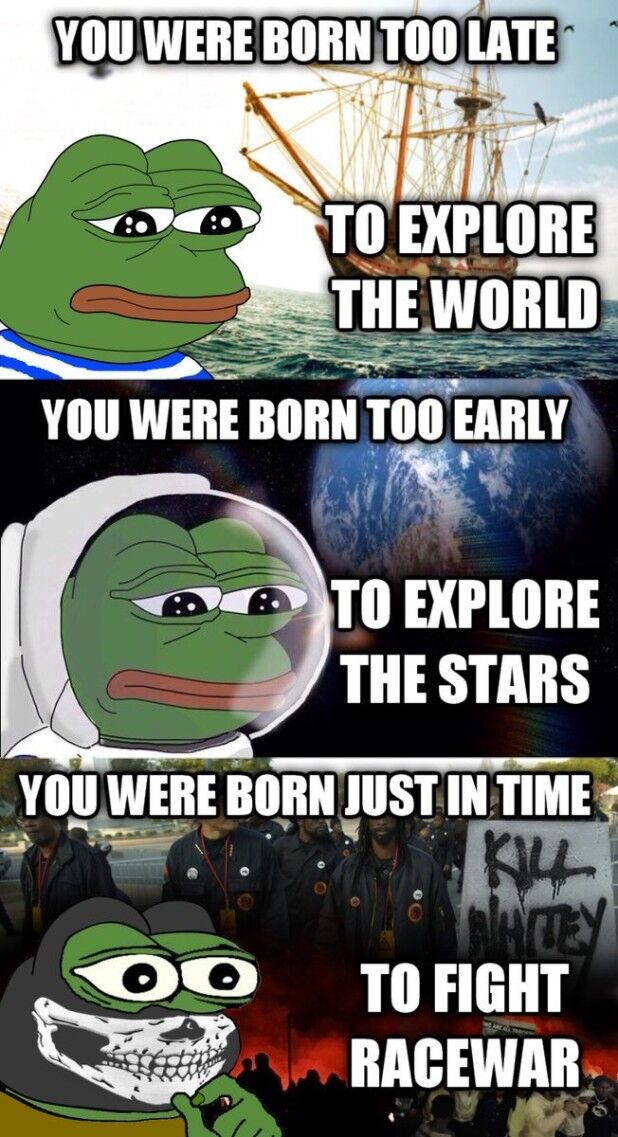 Advertisement
Trying to determine exactly why this particular frog was politically co-opted is a Sisyphean task—but Claartje van Dijk, a curator at the International Center of Photography in New York, has a few tentative theories. Earlier this year, she co-curated a section of an exhibition that focused on the rightwing use of memes, many of which included an appropriated Pepe.
She posits that the frog’s comic book lifestyle—“hanging out with the boys, drinking beer, eating pizza”—had an edge of machismo that the so-called alt-right and beyond responded to.
There are more esoteric factors to consider as well, van Dijk says—like the right wing’s fondness for “Kek,” which is both a frog-headed Egyptian god and a variation of “lol” in the game World of Warcraft. The meme, she says, “morphed into Pepe as a God, and then developed into memes with Donald Trump as a God or Emperor.”
I asked van Dijk if she thinks, as some have suggested, that the right wing is just better at this stuff than progressives—quicker with memes, savvier with hashtags. “I think that’s partly true, but it’s also that if you use a shock effect you get a stronger response,” she says. “A meme may have political value, but if it doesn’t have that shock it doesn’t necessarily stay in your mind as much.”
“I think it’s just the nature of anonymous people on the internet, and troll culture,” Furie says, when I reach him via telephone. The initial abusive or offensive Pepe memes, he believes, were “more of a disgustingly playful way to maintain some grasp on Pepe as being ‘their’ thing.” Somewhere along the way, that playfulness descended fully into the gutter. 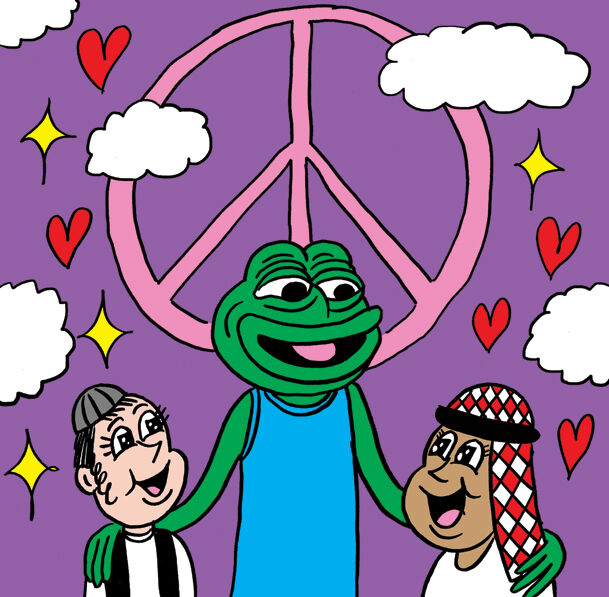 An image made by Johnny Ryan to support the #SavePepe campaign. Courtesy of #SavePepe.

“Another irony is that all of the Boy’s Club characters are anthropomorphic, abstract creatures,” Furie adds. “I purposefully turned them into these little Muppets to transcend race, so they have this universal appeal. And it’s weird how Pepe on the internet evolved to stand for white supremacy—because he’s a damn frog.”
In a cartoon that Furie contributed to an anthology given out on Free Comic Book Day in May, the artist seemed to have let Pepe go: The strip portrays the frog dead, in an open coffin, while his pals from Boy’s Club pay their respects.
But rather than admitting defeat and allowing Pepe to drown in the online swamp, Furie has decided to fight back. A hashtag campaign was launched in conjunction with the Anti-Defamation League, but #SavePepe has been predictably fraught—for every supporter, there seems to be two people vowing to keep Pepe hateful.
In one example among many, a Twitter user employed the hashtag to post an altered picture of Pepe’s funeral scene—one in which a Hitleresque frog is popping out of his coffin, a green arm raised in a “Sieg Heil.” One user said, “Matt Furie is lucky we do not launch a meme jihad against him for trying to profit off our Prophet.” Another user added, “Matt Furie doesn’t understand how the internet works.”
Furie has, meanwhile, maintained his composure. “I like the idea of people in their mom’s basement thinking that they’re controlling the fabric of reality through this frog,” he says, “and that they’re winning right now.”
The cartoonist has launched a Kickstarter campaign to raise funds for a new Boy’s Club book that aims to refurbish Pepe’s tarnished image. “It’s been a long strange trip for Pepe,” he tells me, “but as his so-called creator, I’ve got my own narrative, too. And my narrative has been to continue being creative, and focusing on the positive stuff.” 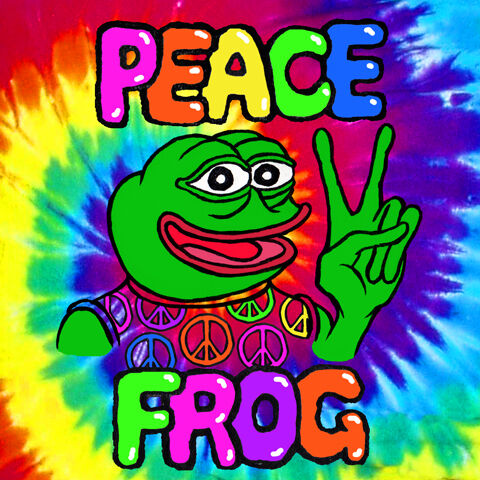 An image made by Kevin Sukho Lee to support the #SavePepe campaign. Courtesy of #SavePepe. 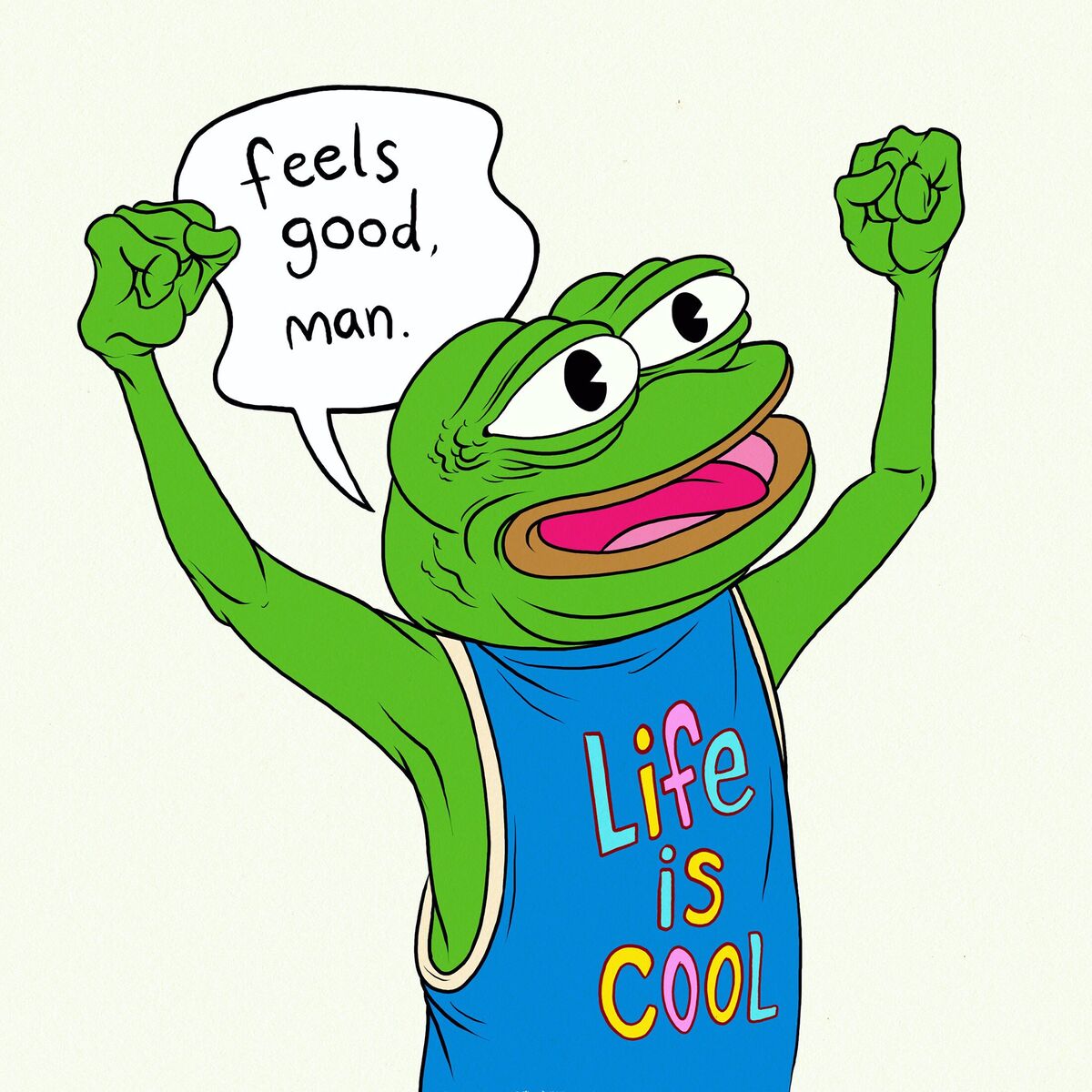 Furie isn’t divulging much information about the plotline of the comic book he’ll publish this fall with the Kickstarter funds. (With 18 days left, the campaign has already raised over $25,000 with a goal of $10,000). “When Pepe comes back he’s going to transcend all this stuff,” the cartoonist says. “He’ll be an evolved version of himself.”
Pepe, of course, isn’t the first cartoon character to find himself co-opted by forces beyond its control. Contemporary art is ripe with such examples, from
Paul McCarthy
’s pornographic appropriations of Snow White to
Llyn Foulkes
’s dark riffs on Mickey Mouse. But in those cases, a famously recognizable symbol was borrowed in order to tell a different story, one that would never be powerful enough to subsume the character’s original intent.
The challenge with Pepe is that he began as a comparatively obscure cult figure within the cartooning community, but is now known primarily as a meme associated with racism, anti-immigration, neo-Nazism, and the darker underbelly of Trump’s base. Most Americans wouldn’t be able to tell you what Boy’s Club is—but they might well remember that alt-righter Richard Spencer was explaining the meaning of his Pepe the Frog lapel-pin a second before an anti-fascist protester punched him on camera.
“It’s going to be a hard battle for Matt to reclaim Pepe’s good character,” van Dijk acknowledges. “He may be able to take the peace, love, and happiness part—the positive, cute side of Pepe—and keep that going. It’s not impossible, but it will take some time.”
Scott Indrisek
Related Stories