When Performance Art Takes to the Street, the Results Are Moving 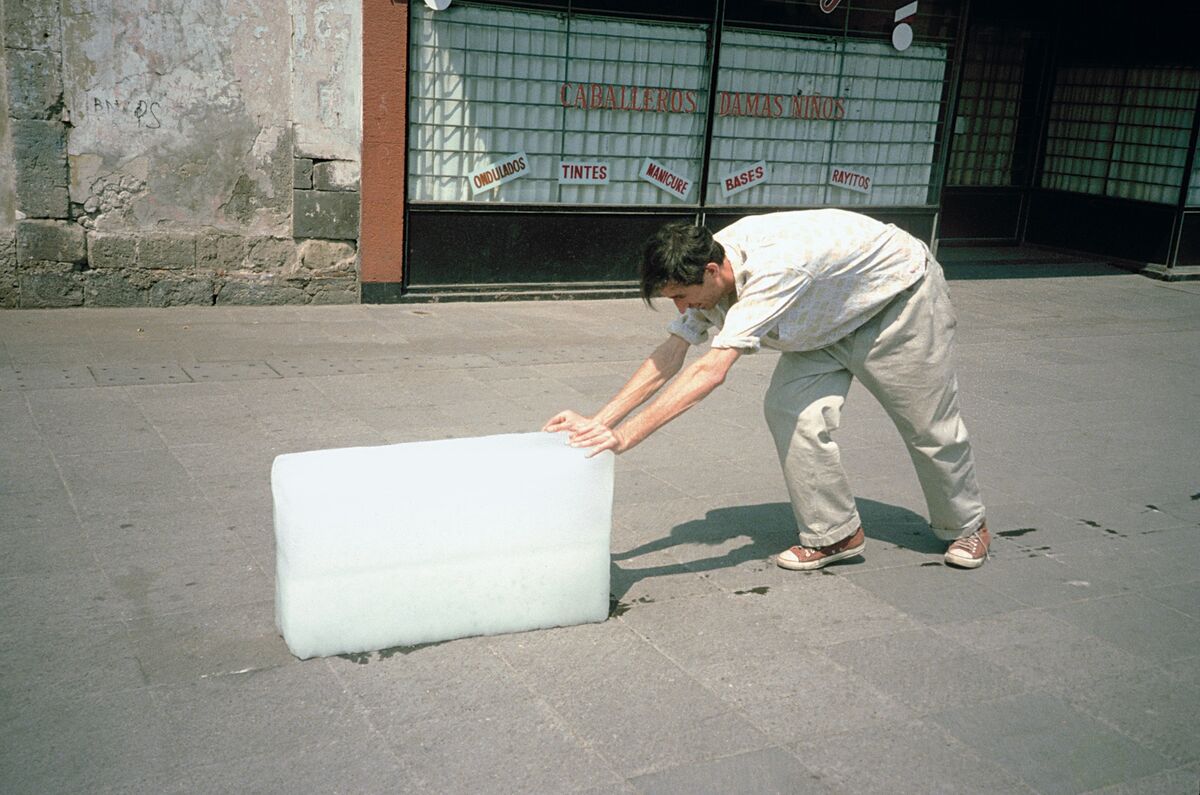 Francis Alÿs, Paradox of Praxis I (Sometimes Doing Something Leads to Nothing), 1997. © Francis Alÿs. Courtesy the artist and David Zwirner.

If you live in a big city, you see it all the time: a businesswoman yelling into her iPhone as she exits a Lyft; a drunk retching into a gutter; a couple bickering while they wait for the bus. These little eruptions of passion, private and public at the same time, are as intense for the people involved as they are meaningless to passersby. But such is the paradox of city streets: They’re so large and crowded and impersonal that, very often, they allow you to be as personal as you like.
With their public/private dichotomies and democratic themes, the streets have inspired some of the most important contemporary political artists. A new exhibition at the MAXXI in Rome, “The Street. Where The World Is Made,” is as woolly as its title suggests (one bit of wall text mentions “resistance, protest, occupy, manifest, feminism and the carnivalesque,” and that’s just the section on street politics). But among the exhibition’s 200-odd works, a specific sort of figure does emerge: the political artist for whom the street isn’t just a backdrop, but a subject, a tool for critiquing the art world and pushing art out into the world.
Pushing—the literal kind—is central to Belgian artist
Francis Alÿs
’s Paradox of Praxis I (1997), a performance piece that might have been suffocatingly dull if it weren’t also a rollicking tour of the streets of Mexico City. For nine hours, Alÿs trudged across town pushing a block of ice—too heavy, at first, for a single person to carry; then, manageable enough to be kicked like a football; and, finally, the perfect size for a glass of mezcal. In the short film Alÿs made to accompany his performance, the first thing we see is the street: the smoother it is, the easier Alÿs’s task becomes, but the longer this task continues. Thoughts of this sort inevitably occur to you while watching the video, and you can be damn sure they occurred to Alÿs during his long, sweaty day in Mexico City. For Alÿs, studying the streets is more than an intellectual parlor game. At its best, his performance recalls the words of the great French writer Georges Perec: “Contrary to the buildings, which almost always belong to someone, the streets in principle belong to no one.” For Perec, as with Alÿs, the contemplation of streets isn’t about streets themselves, so much as it is about the people who inhabit that space, each of whom has as much right to be there as anybody else. The Paradox of Praxis video begins with a shot of the sidewalk, but over its five minutes, you begin to notice the passersby, many of whom are manual laborers carrying heavy loads of their own, and not for art’s sake. Nobody stops to ask the artist what he’s doing with a block of ice—they appear to be numb to the sight of people pushing things here and there, that there seems to be no point in learning more. People can be invisible, Alÿs suggests, in the same sense that streets are; seeing one allows you to recognize the other.
It’s no coincidence that the object Alÿs chose to push through the streets of Mexico City was, quite literally, a white cube—a term coined by Brian O’Doherty to describe the default venue for displaying art. One way of interpreting Paradox of Praxis (and, for that matter, a lot of other artworks that take the street as a subject) is to see it as a conflict between two different ways of thinking about art. On one hand, the white cube view: object-based, institutional, not exactly renowned for its inclusiveness. On the other hand, the street view: transient, unpredictable, populist. While Alÿs’s work can’t be easily reduced to one or the other, you can’t help but notice that after a day of hard work, the streets are still intact, while the white cube is a puddle of water.
It would take another 20 articles, and a couple MAXXI-fulls of art, to address all the ways artists have addressed the streets in their work. Even so, it’s possible to pick out a few recurring features of this kind of art. Performing art in the city streets is utterly different from—and even antithetical to—the typical Western way of displaying art: hanging it in a fancy building and charging people to buy or see it. So it’s not terribly surprising that much of art performed in the streets comes across as a rebuttal to the institutional art world. Consider the artist
David Hammons
, who in 1983 spent a winter’s day selling snowballs on a New York street corner. A photograph from that day shows a passerby studying Hammons’s products, seemingly unaware that she could walk a couple steps away and make her own for free. Advertisement
When Alÿs pushed a block of ice through the streets of Mexico City, he seemed to be posing an alternative to the insularity of art galleries. By peddling snowballs on the streets of New York, however, Hammons seemed to suggest that streets and galleries were one and the same—places where hustlers sold strange, nonfunctional objects to unwitting buyers. (The same year that Hammons sold snowballs, it’s worth remembering,
Jeff Koons
had the idea to sink a basketball in a tank of water and salt. In 2016, one of the tanks sold for $15 million.)
By taking to the streets, was Hammons ridiculing the New York gallery scene or embracing it? If you’re familiar with contemporary art, you can probably guess the answer: a little from column A, a little from column B. At its best, art performed on the streets can be a refreshing alternative to the gallery world, but this doesn’t mean it’s above the political hedging and half-stepping—euphemistically known as “ambiguity”—that characterizes too much of the institutional art world.
But even if art performed in the streets can feel just as noncommittal and overly conceptual as art that hangs in galleries, the best art of this kind has an urgency—an emphasis, per Alÿs, on Praxis—that few gallery pieces can match. The Chicago-based artist
Pope.L
has been known to stage wild, eye-opening stunts in the streets. “By bringing his performances to the streets,” wrote Nick Stillman in the Brooklyn Rail, “minus the hanging-on and hullabaloo of the art world, Pope.L promises the potential to connect directly with pedestrians.” In 1991, he had a cameraman film him crawling through the gutters of Tompkins Square Park, and for his piece The Great White Way (2001–09), he crawled down all 22 miles of Broadway. During the former, a police officer stopped Pope.L at the request of a black pedestrian, who found the sight of the black artist being filmed by a white man to be racially offensive. While the three “vertical” individuals bickered, Pope.L stayed on the ground and begged to be allowed to “do my work.”
In a gallery, the performance might have felt tired and clichéd: the familiar postmodern gambit of recreating racial power dynamics in order to critique them. But because it played out in the streets of New York City, Tompkins Square Crawl achieved what almost all political artworks shoot for and precious few succeed in doing: It inspired people to argue about politics and question deeply held assumptions. Put another way, Pope.L’s performance did what the best street performances often do: shed a light on the political injustices people often ignore, and render them suddenly, terrifyingly visible.
Jackson Arn
Related Stories